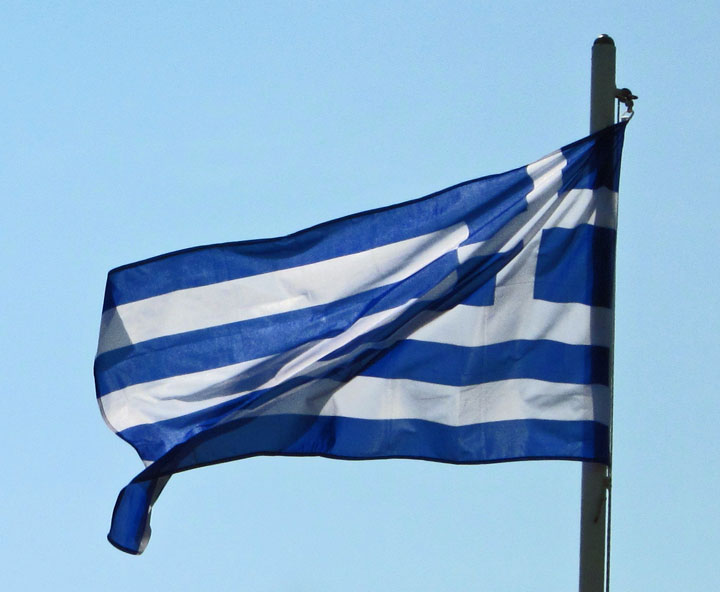 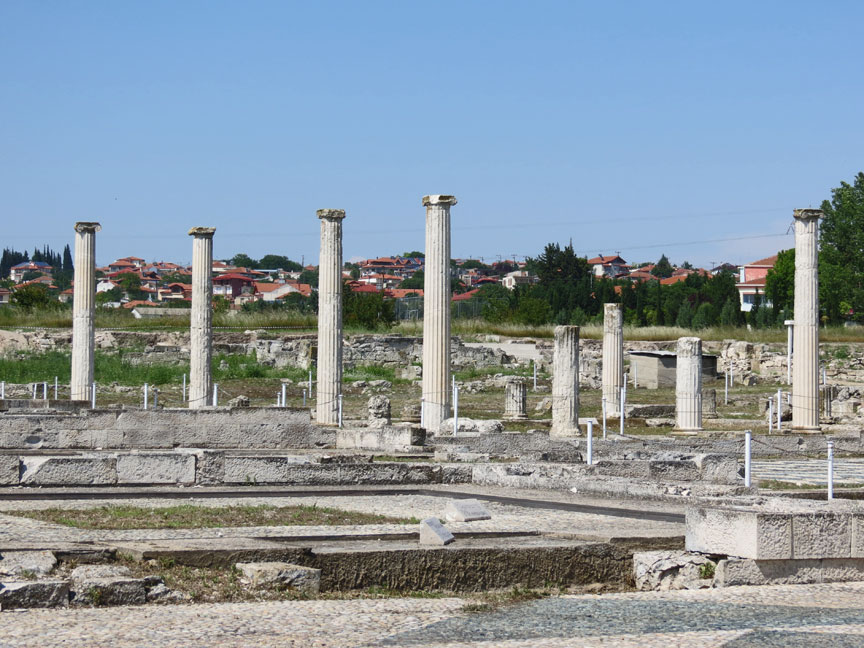 Pella (Greek: Πέλλα), an ancient Greek city located in the current Pella regional unit of Central Macedonia in Greece, was the capital of the ancient kingdom of Macedonia.

A common folk etymology is traditionally given for the name Pella, ascribing it to a form akin to the Doric Apella, originally meaning a ceremonial location where decisions were made. However, the local form of Greek was not Doric, and the word exactly matches standard Greek pélla "stone", possibly referring to a famous landmark from the time of its foundation. Another proposed etymology is that Pella originally meant "defensible citadel on a cliff", and this etymology is backed by the numerous ancient cities throughout Greece with similar name i.e. Pellana, Pallene, Palle, Pelle, Pelion, Palamede, Pellene, etc. The word Polis is most probably derived from that ancient meaning. 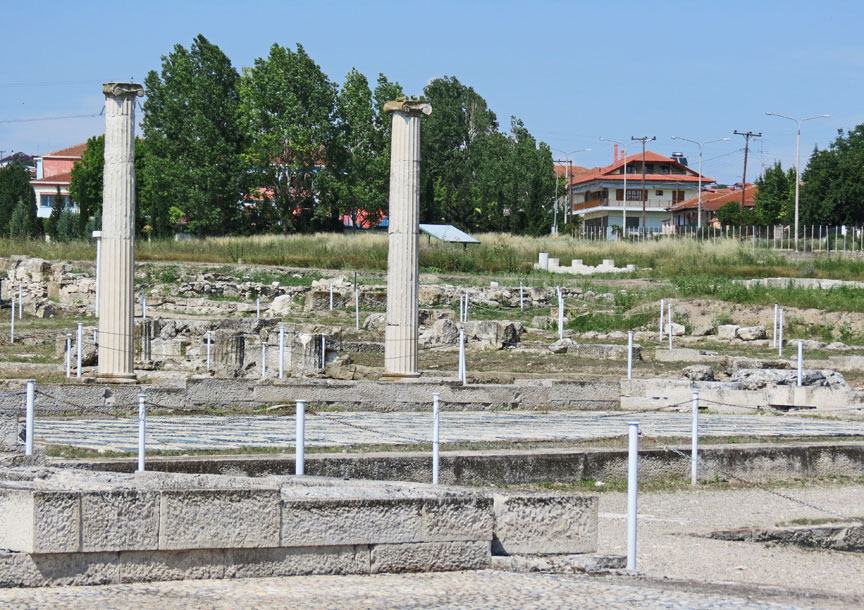 The city was founded in 399 BC by King Archelaus (413–399 BC) as the capital of his kingdom, replacing the older palace-city of Aigai. After this, it was the seat of the king Philip II and of Alexander, his son. In 168 BC, it was sacked by the Romans, and its treasury transported to Rome. Later, the city was destroyed by an earthquake and eventually was rebuilt over its ruins. By 180 AD, Lucian could describe it in passing as "now insignificant, with very few inhabitants". 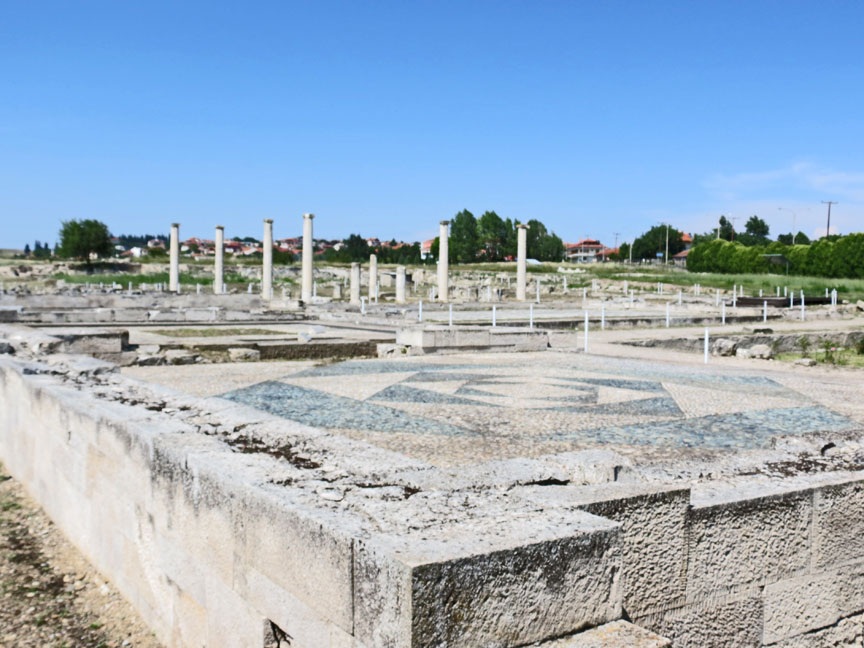 Pella is first mentioned by Herodotus of Halicarnassus (VII, 123) in relation to Xerxes' campaign and by Thucydides (II, 99,4 and 100,4) in relation to Macedonian expansion and the war against Sitalces, the king of the Thracians. According to Xenophon, in the beginning of the 4th century BC, it was the largest Macedonian city. It was probably built as the capital of the kingdom by Archelaus, although there appears to be some possibility that it may have been Amyntas. It attracted Greek artists such the painter Zeuxis, the poet Timotheus of Miletus and the tragic author Euripides who finished his days there writing and producing Archelaus. 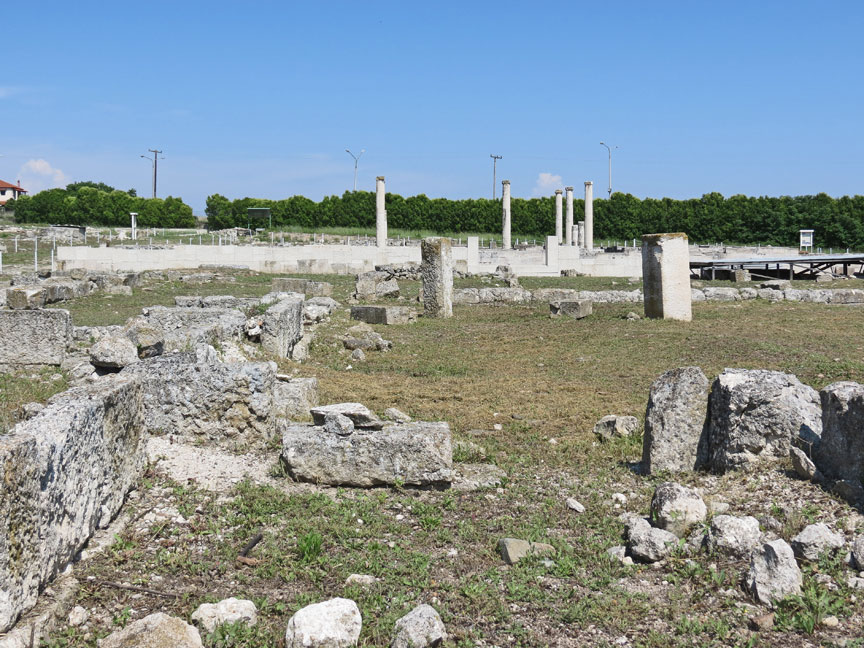 Archelaus invited the painter Zeuxis, the greatest painter of the time, to decorate it. He was later the host of the Athenian playwright Euripides in his retirement. Euripides Bacchae premiered here, about 408 BC. Pella was the birthplace of Philip II and of Alexander, his son. The hilltop palace of Philip, where Aristotle tutored young Alexander, is being excavated. 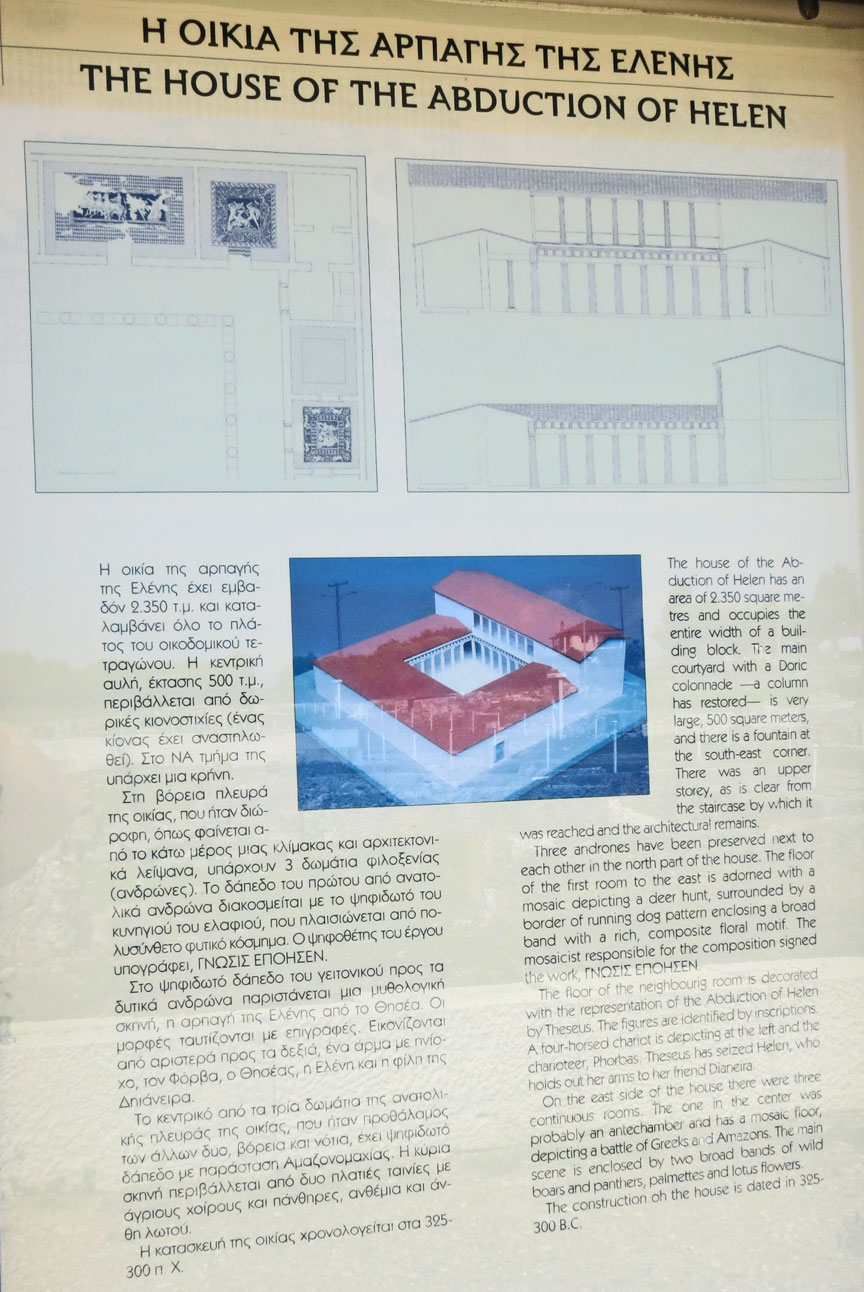 In antiquity, Pella was a port connected to the Thermaic Gulf by a navigable inlet, but the harbor has silted, leaving the site landlocked. The reign of Antigonus likely represented the height of the city, as this is the period which has left us the most archaeological remains.

Pella is further mentioned by Polybius and Livy as the capital of Philip V and of Perseus during the Macedonian Wars, fought against the Roman Republic. In the writings of Livy, we find the only description of how the city looked in 167 BC to Lucius Aemilius Paulus Macedonicus, the Roman who defeated Perseus at the battle of Pydna. 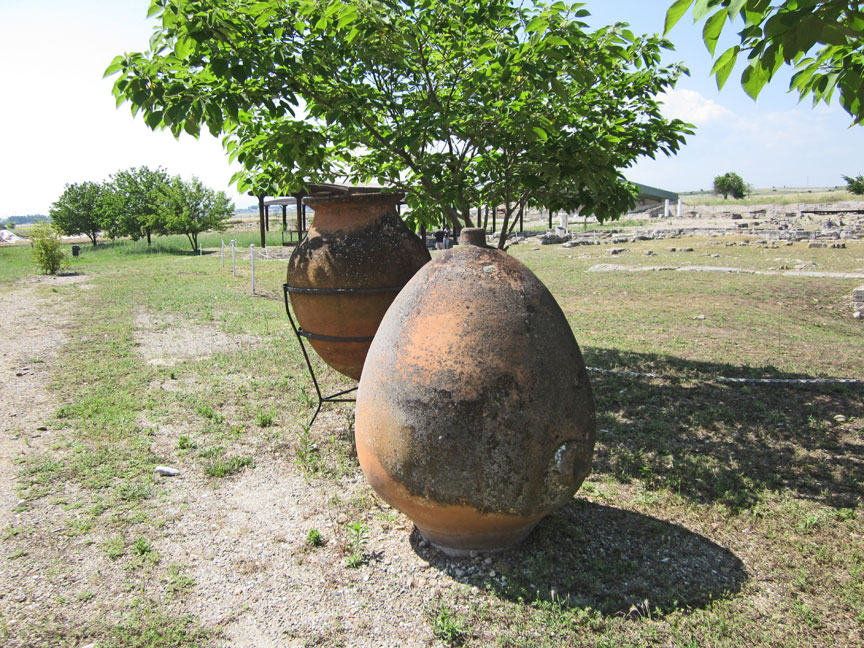 Paulus observed that it was not without good reason that it had been chosen as the royal residence. It is situated on the south-west slope of a hill and surrounded by a marsh too deep to be crossed on foot either in summer or winter. The citadel the "Phacus," which is close to the city, stands in the marsh itself, projecting like an island, and is built on a huge substructure which is strong enough to carry a wall and prevent any damage from the infiltration from the water of the lagoon. At a distance it appears to be continuous with the city wall, but it is really separated by a channel which flows between the two walls and is connected with the city by a bridge. Thus it cuts off all means of access from an external foe, and if the king shut anyone up there, there could be no possibility of escape except by the bridge, which could be very easily guarded. 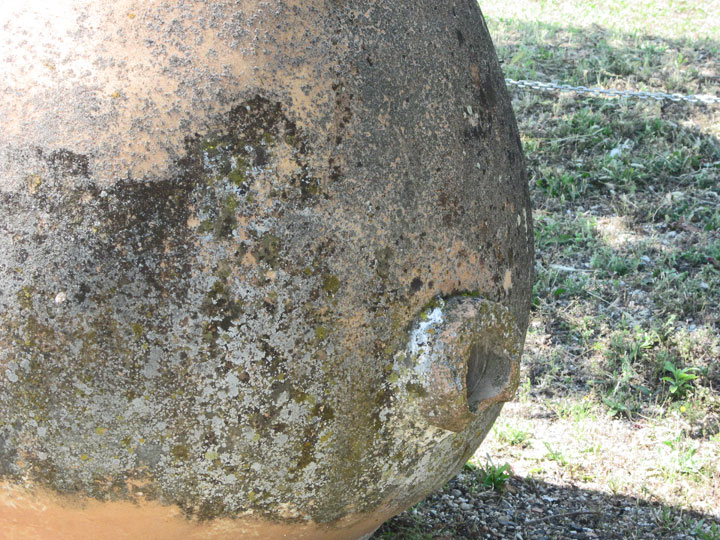 The famous poet Aratus died in Pella ca 240 BC. Pella was sacked by the Romans in 168 BC, when its treasury was transported to Rome. 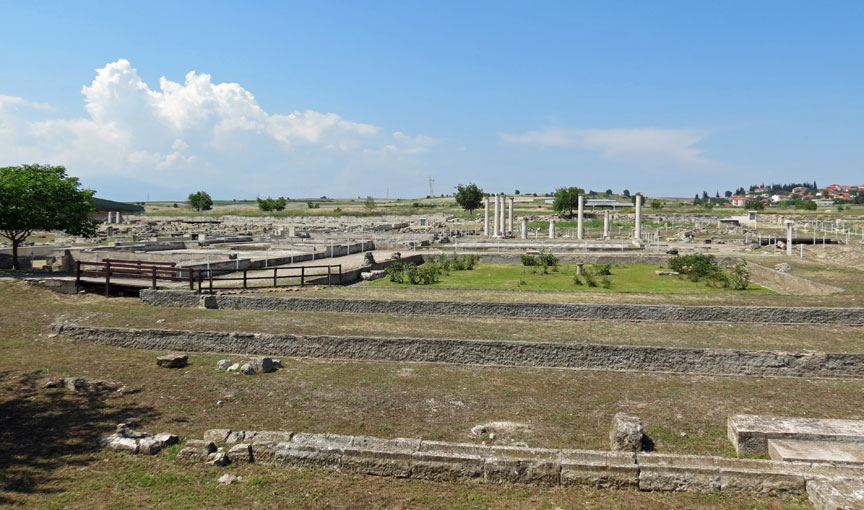 In the Roman province of Macedonia, Pella was the capital of the third district, and was possibly the seat of the Roman governor. Crossed by the Via Egnatia, Pella remained a significant point on the route between Dyrrachium and Thessalonika. Cicero stayed there in 58 BC, but by then the provincial seat had already transferred to Thessalonika. It was then destroyed by earthquake in the first century BC; shops and workshops dating from the catastrophe have been found with remains of their merchandise. The city was eventually rebuilt over its ruins, which preserved them, but, ca AD 180, Lucian of Samosata could describe it in passing as "now insignificant, with very few inhabitants".

Mosaics on the Pella site 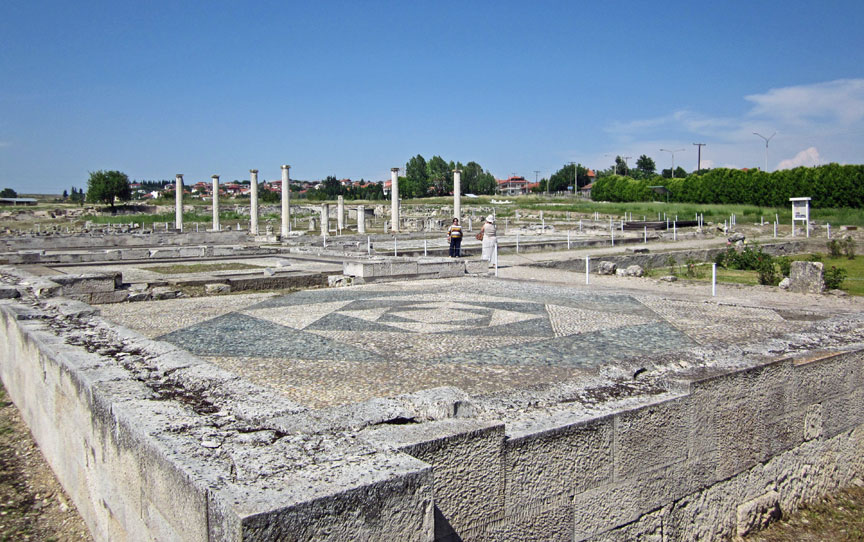 The city went into decline for reasons unknown (possibly an earthquake) by the end of the 1st century BC. It was the object of a colonial deduction sometime between 45 and 30 BC; in any case currency was marked Colonia Iulia Augusta Pella. Augustus settled peasants there whose land he had usurped to give to his veterans (Dio Cassius LI, 4). But unlike other Macedonian colonies such as Philippi, Dion, and Cassandreia it never came under the jurisdiction of ius Italicum or Roman law. Four pairs of colonial magistrates (IIvirs quinquennales) are known for this period. 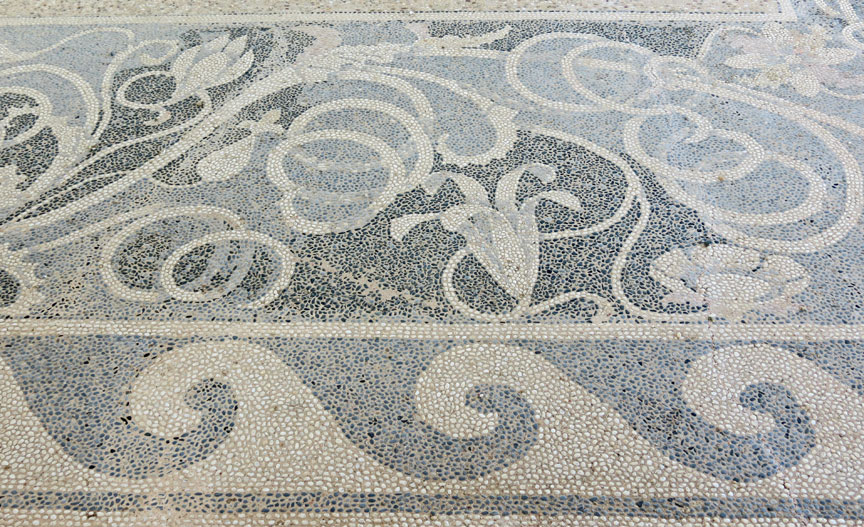 The decline of the city was rapid, in spite of colonization: Dio Chrysostom (Or. 33.27) and Lucian both attest to the ruin of the ancient capital of Philip II and Alexander; though their accounts may be exaggerated. In fact, the Roman city was somewhat to the west of and distinct from the original capital; which explains some contradictions between coinage, epigraphs, and testimonial accounts. In the Byzantine period, the Roman site was occupied by a fortified village. 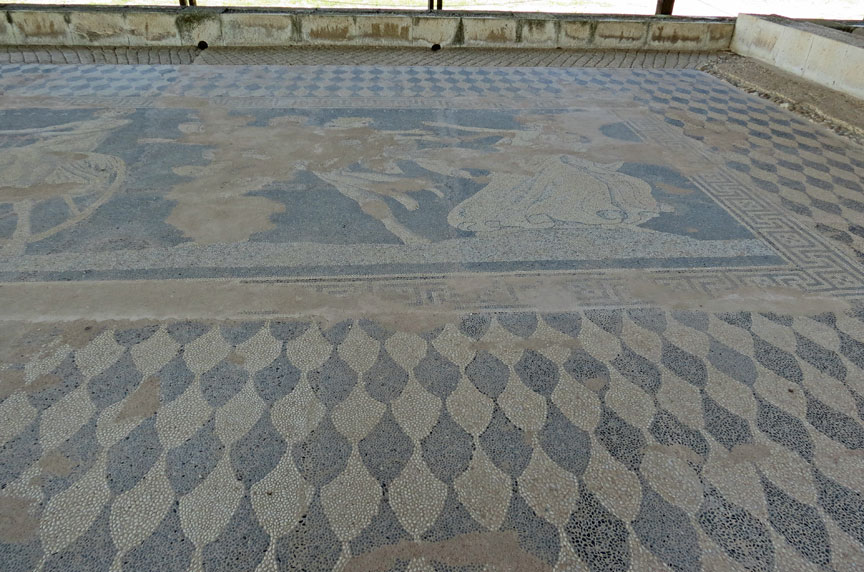 In modern times it now finds itself as the start point of the Alexander The Great Marathon, in honour of the city's ancient heritage. 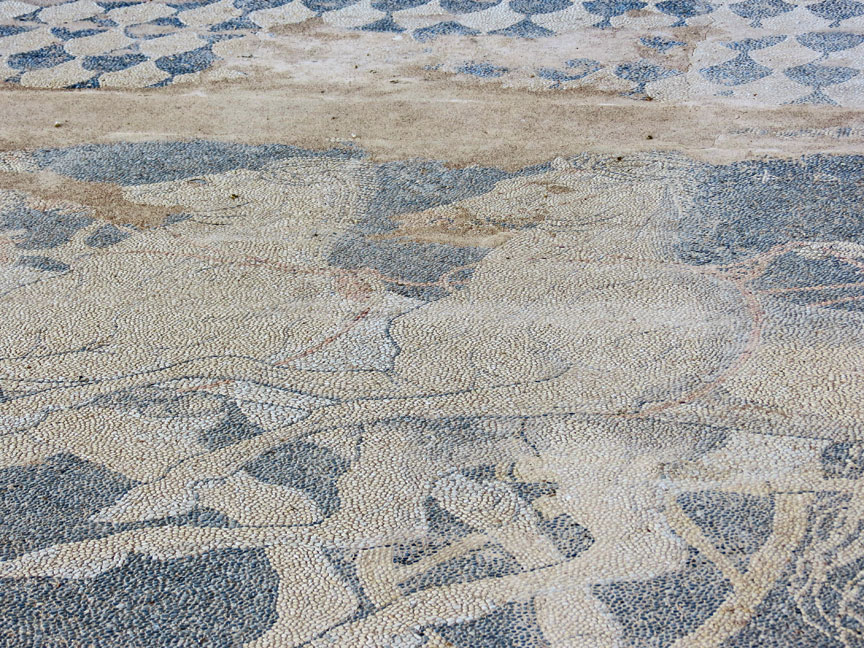 The city is built on the island of Phacos, a promontory which dominates the wetlands which encircle Pella to the south, and a lake which opened to the sea in the Hellenistic period.

The city wall mentioned by Livy is only partly known. It consists of a rampart of crude bricks (about 50 cm square) raised on a stone foundation; some of which has been located North of the palace, and some in the South next to the lake. Inside the ramparts, three hills occupy the North, and the palace is situated on a place of honor on the central hill. Partly searched, it occupied a considerable area of perhaps 60,000 square metres). The plan is still not well known, but has been related to that of the city plan. 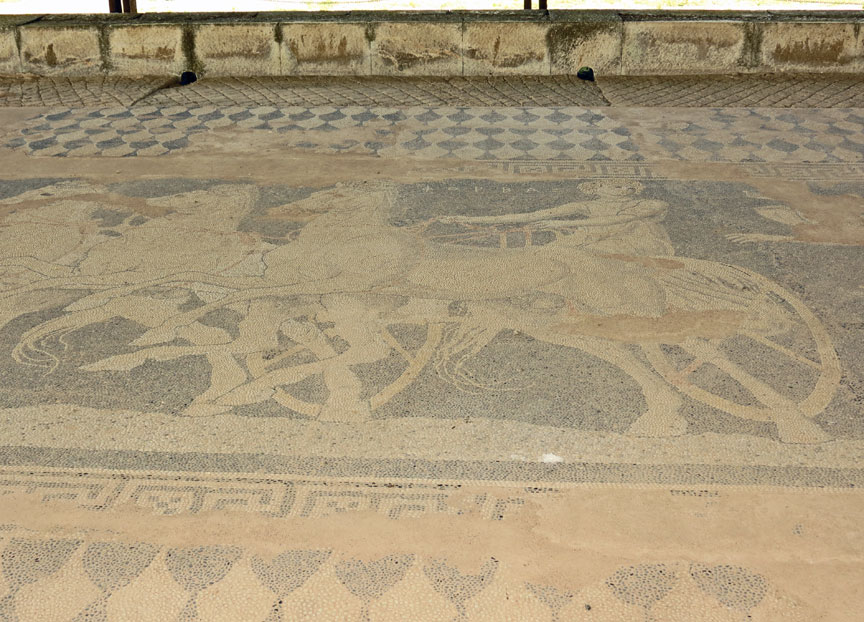 The Pella palace consisted of several — possibly seven — large architectural groupings juxtaposed in two rows, each including a series of rooms arranged around a central square courtyard, generally with porticos. Archaeologists have thus far identified a palaestra and baths. The south facade of the palace, towards the city, consisted of one large (at least 153 metres long) portico, constructed on a two metres high foundation. The relationship between the four principal complexes is defined by an interruption in the portico occuupied by a triple propylaeum, 15 m high, which gave the palace an imposing monumental air when seen from the city below. 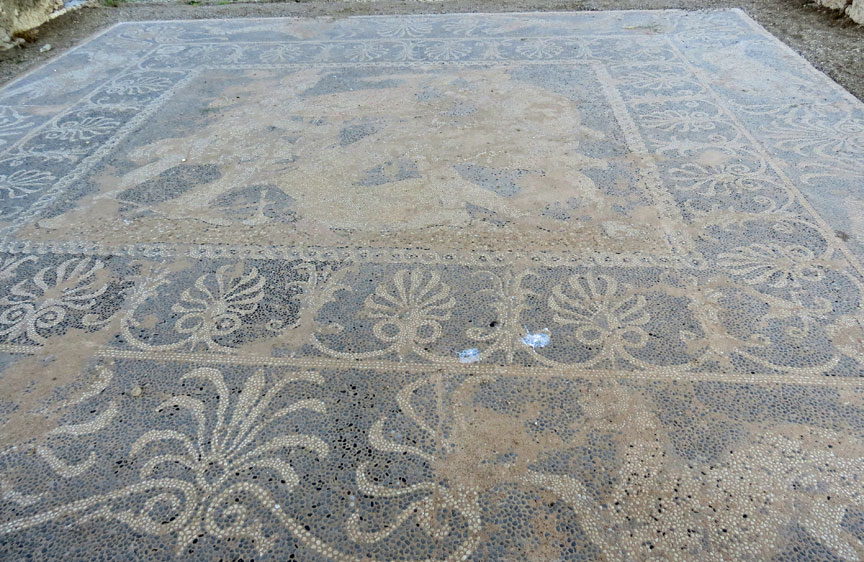 Dating of the palace has posed some problems: the large buildings could date the reign of Philip II, but other buildings appear to be earlier. The baths date from the reign of Cassander. 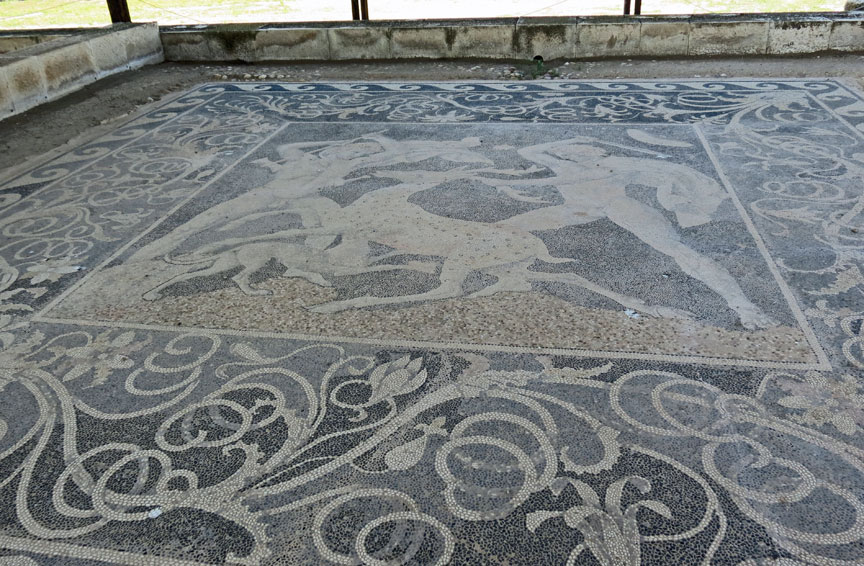 The size of the complex indicates that, unlike the palace at Vergina, this was not only a royal residence or a grandiose monument but also a place of government which was required to accommodate a portion of the administrative apparatus of the kingdom. 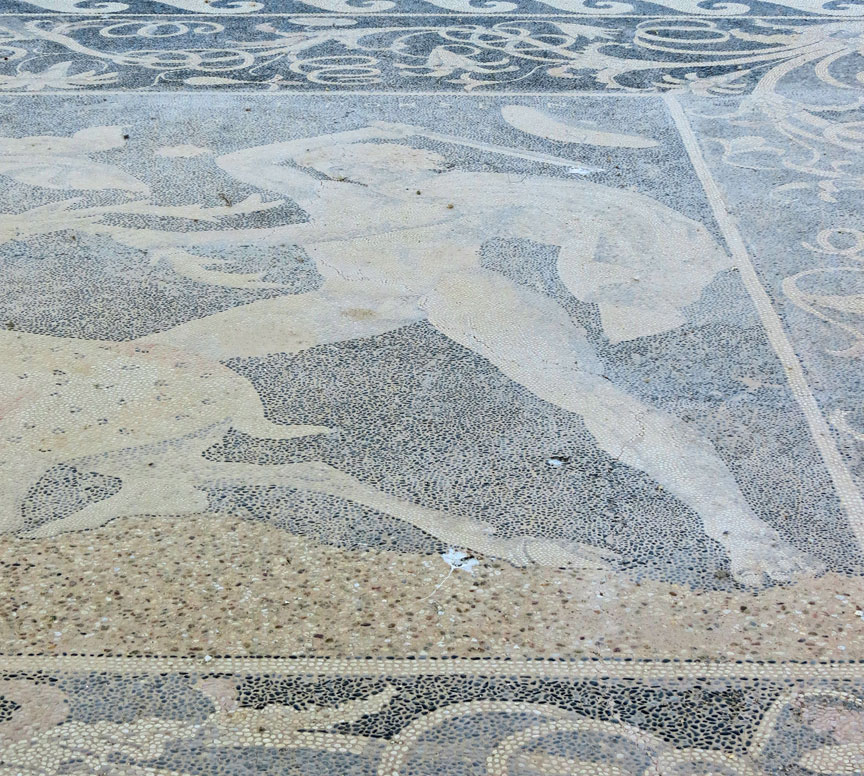 The city proper was located south of and below the palace. Designed on a grid plan as envisaged by Hippodamus, it consists of two series of parallel streets which intersect at right angles and form a grid of eight rows of rectangular blocks. These blocks are of a consistent width — each approximately 45 m — and a length which varies from 111 m to 152 m, 125 metres being the most common. The streets are from 9 to 10 metres wide, except for the middle East–West arterial, which is up to 15 metres wide. This street is the primary access to the central public agora, which occupied a space of ten blocks. Two North-South streets are a also a bit wider than the rest, and serve to connect the city to the port further South. The streets had sewers and were equipped to convey water to individual residences. 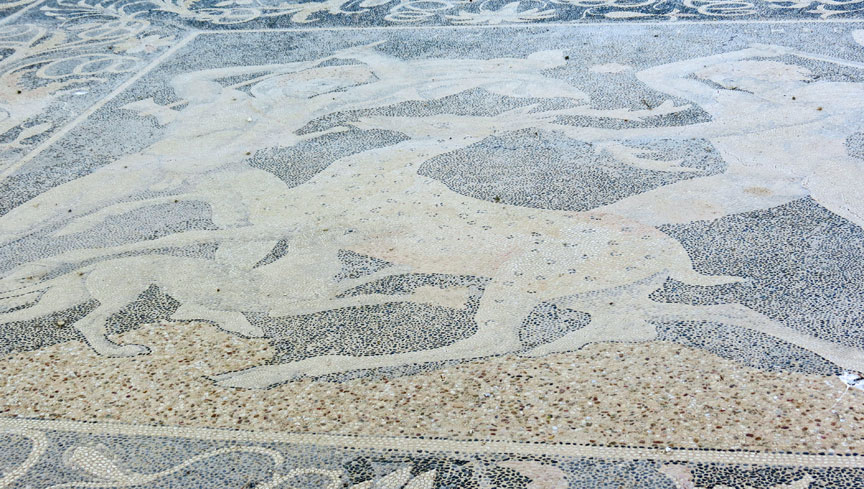 This type of plan dates to the first half of the fourth century BC, and is very close to the ideal in design, though it distinguishes itself by large block size; Olynthus in Chalcidice for example had blocks of 86.3×35 metres. On the other hand, later Hellenistic urban foundations have blocks comparable to those of Pella: 112×58 m in Laodicea ad Mare, or 120×46 m in Aleppo. 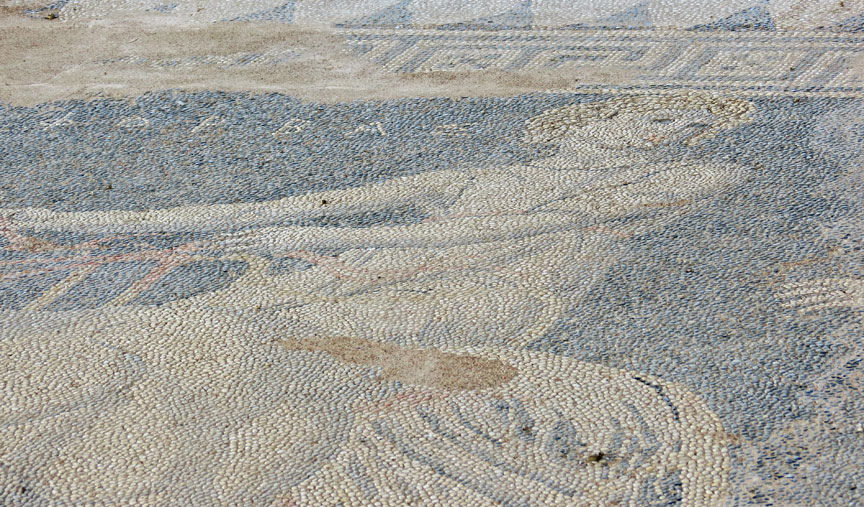 The agora holds pride of place in the centre of the city, occupying an imposing 200 by 181 metres; 262×238 metres if one counts the potrticos which surround it on all sides.

Based on the descriptions provided by Titus Livius, the site was explored by 19th-century voyagers including Holand, Pouqueville, Beaujour, Cousinéry, Delacoulonche, Hahn, Glotz and Struck. The first excavation was begun by G. Oikonomos in 1914–15. The modern systematic exploration of the site began in 1953 and full excavation was being done in 1957. The first series of campaigns were completed in 1963, more excavations following in 1980. These digs continue in the section identified as the agora. 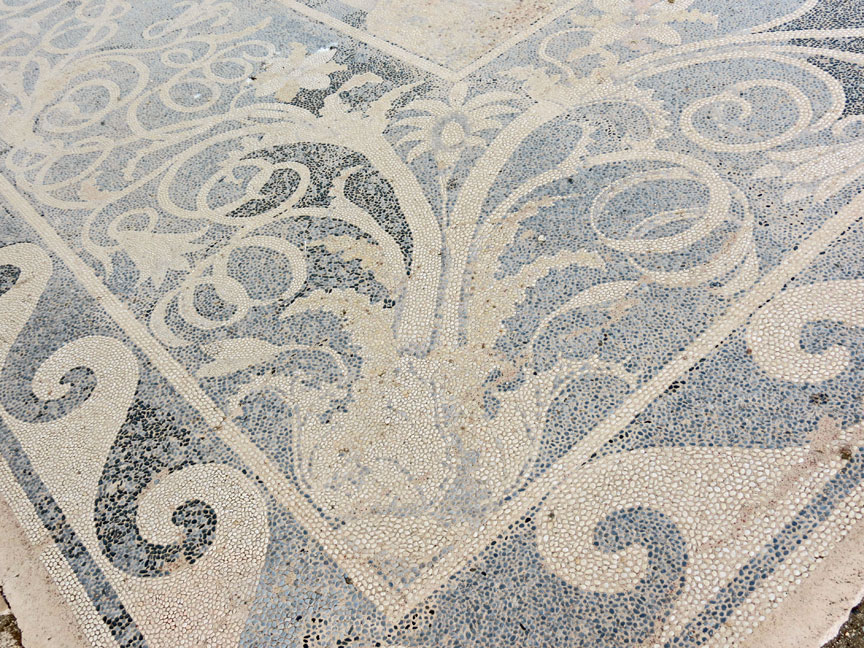 In February 2006, a farmer accidentally uncovered the largest tomb ever found in Greece. The names of the noble ancient Macedonian family are still on inscriptions and painted sculptures and walls have survived. The tomb dates to the 2nd or 3rd century BC, following the rule of Alexander the Great. 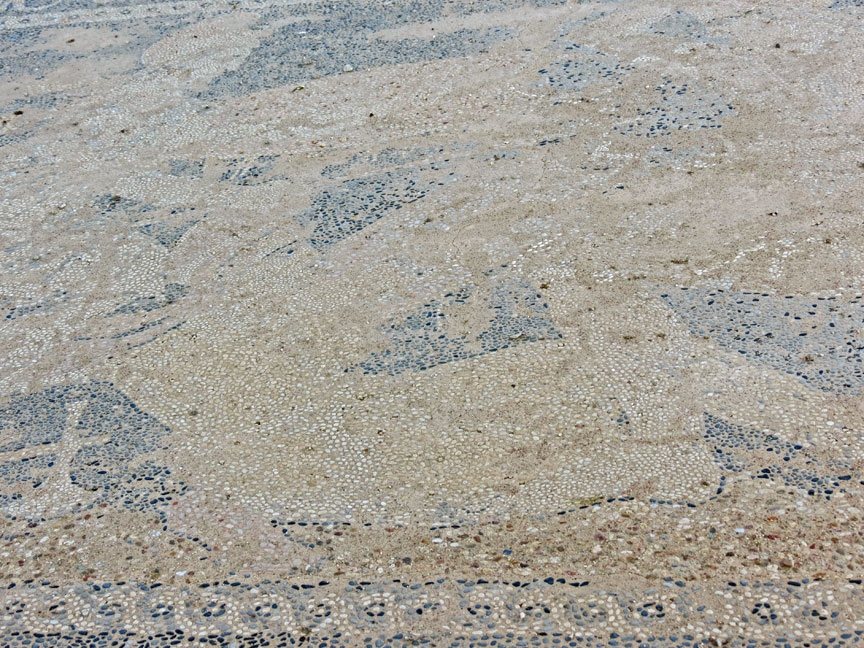 Archaeological digs in progress since 1957 have uncovered a small part of the city, which was made rich by Alexander and his heirs. The large agora or market was surrounded by the shaded colonnades of stoae, and streets of enclosed houses with frescoed walls round inner courtyards. The first trompe-l'oeil wall murals imitating perspective views ever seen were on walls at Pella. There are temples to Aphrodite, Demeter and Cybele, and Pella's pebble-mosaic floors, dating after the lifetime of Alexander, are famous: some reproduce Greek paintings; one shows a lion-griffin attacking a stag, a familiar motif also of Scythian art, another depicts Dionysus riding a leopard. 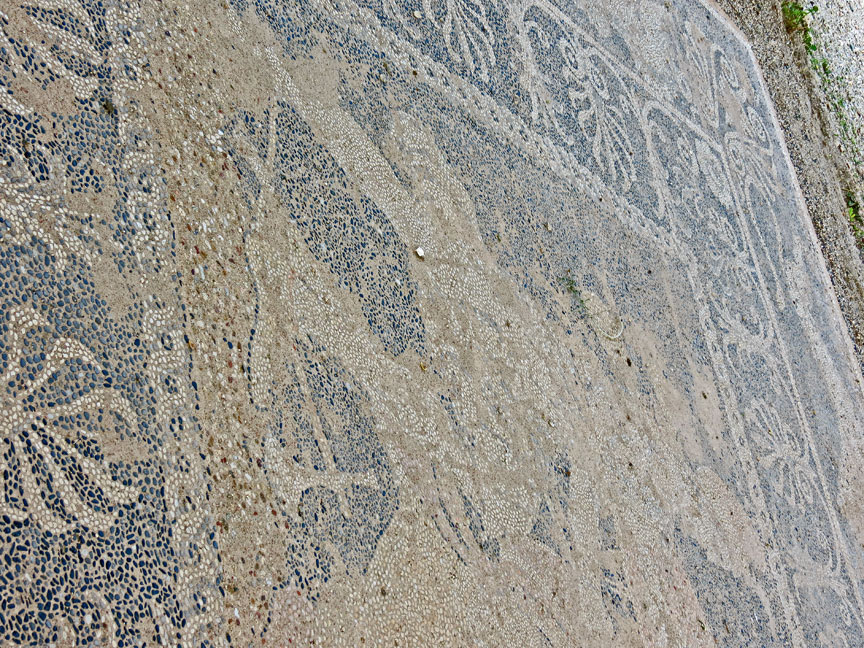 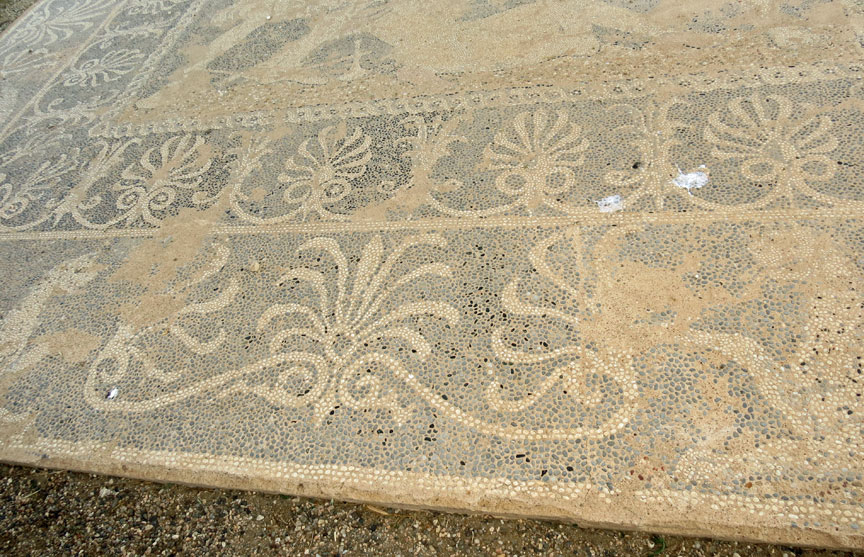 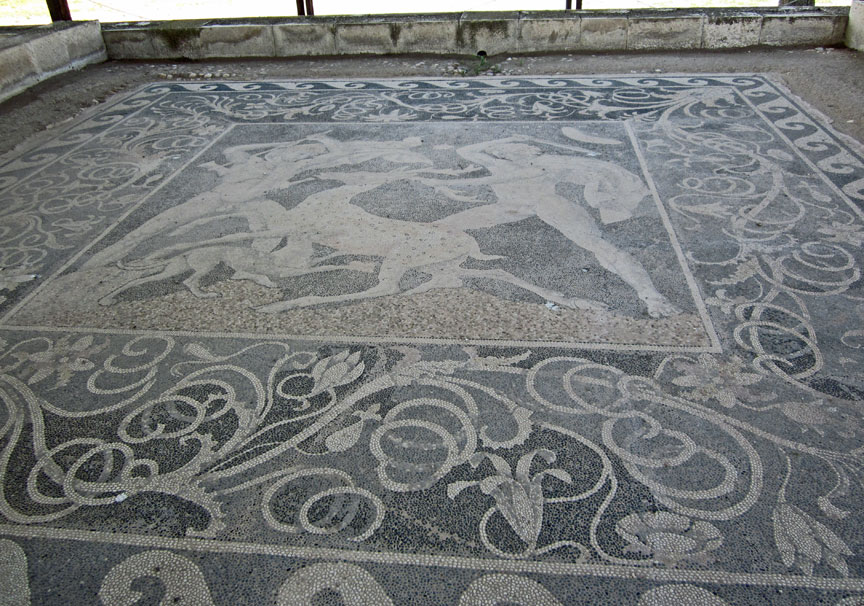 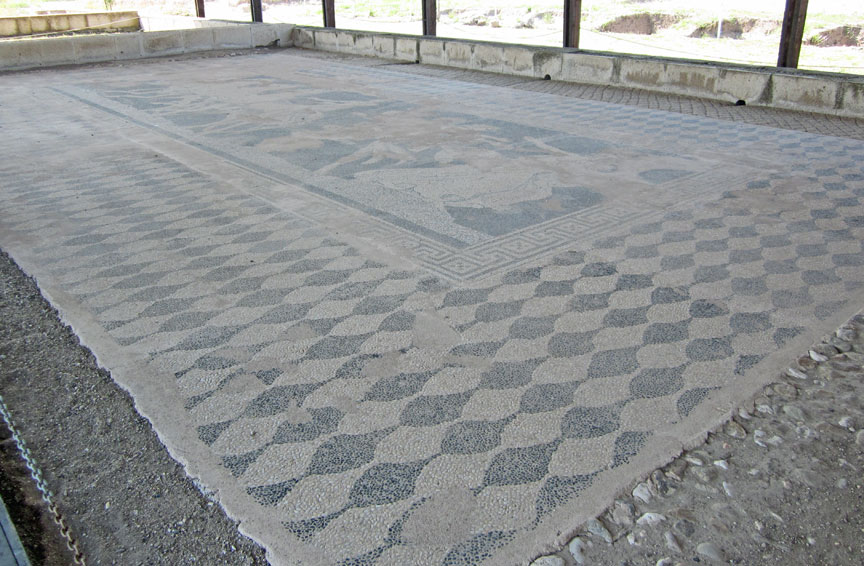 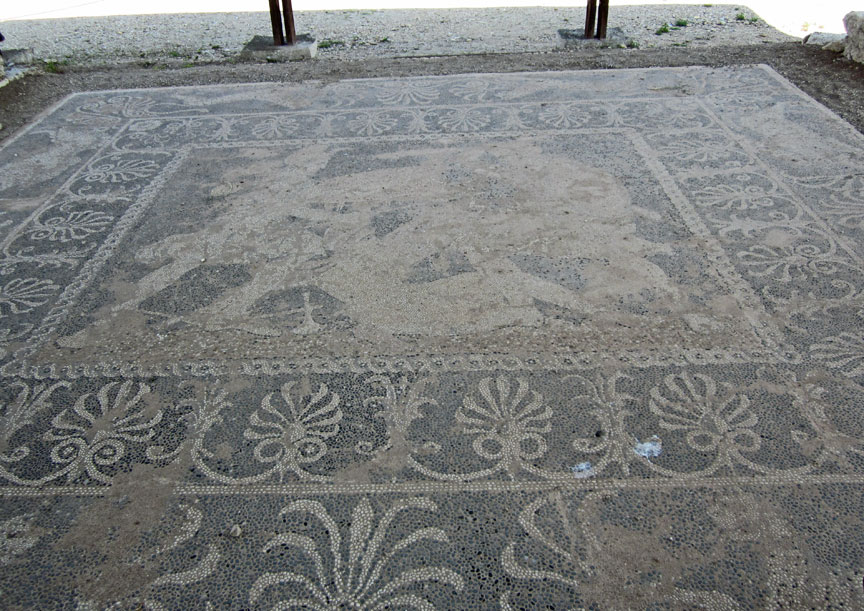 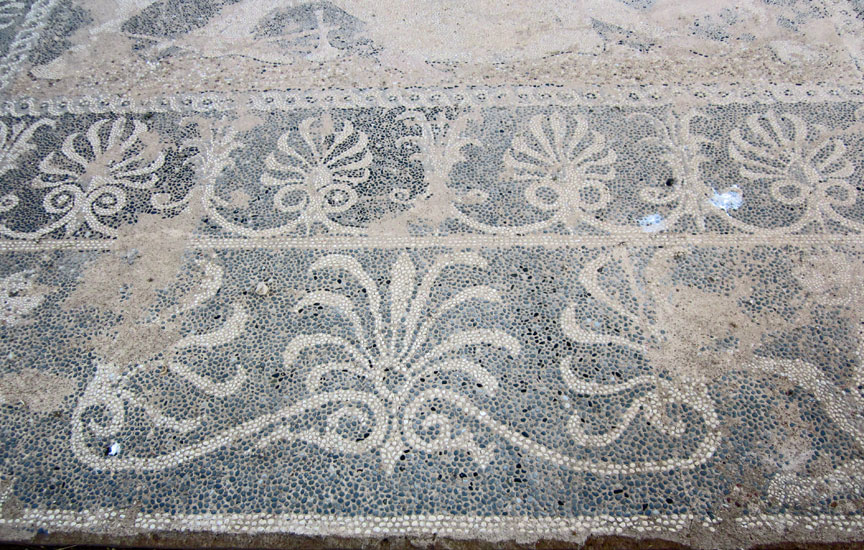 More Mosaics in the Museum 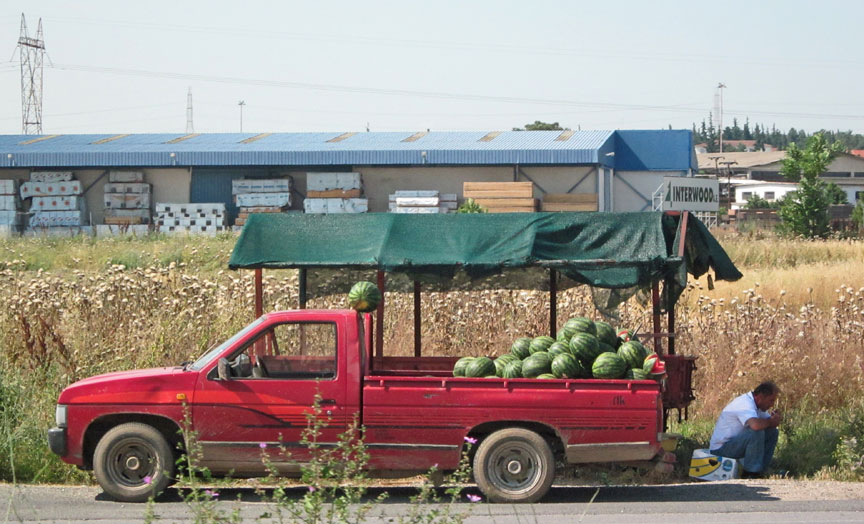