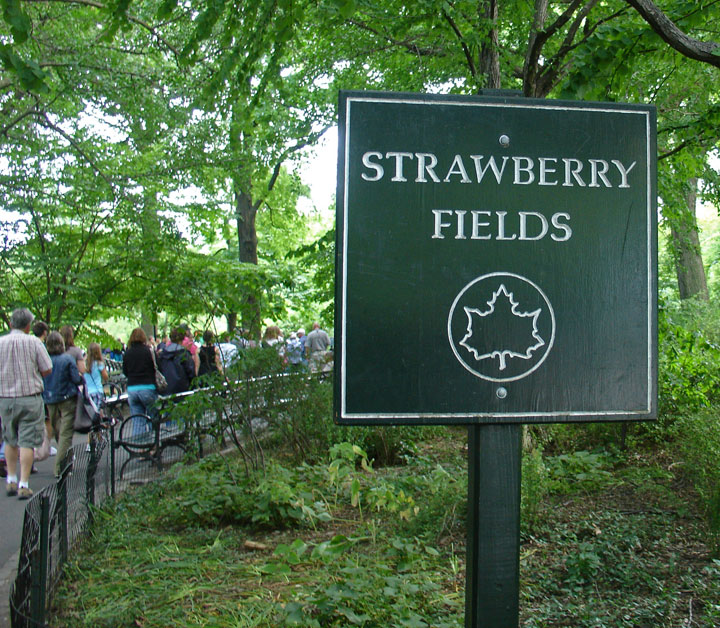 Strawberry Fields is a 2.5-acre (10,000 m2) landscaped section in New York City's Central Park that is dedicated to the memory of the musician John Lennon. It is named after the Lennon/McCartney song "Strawberry Fields Forever". 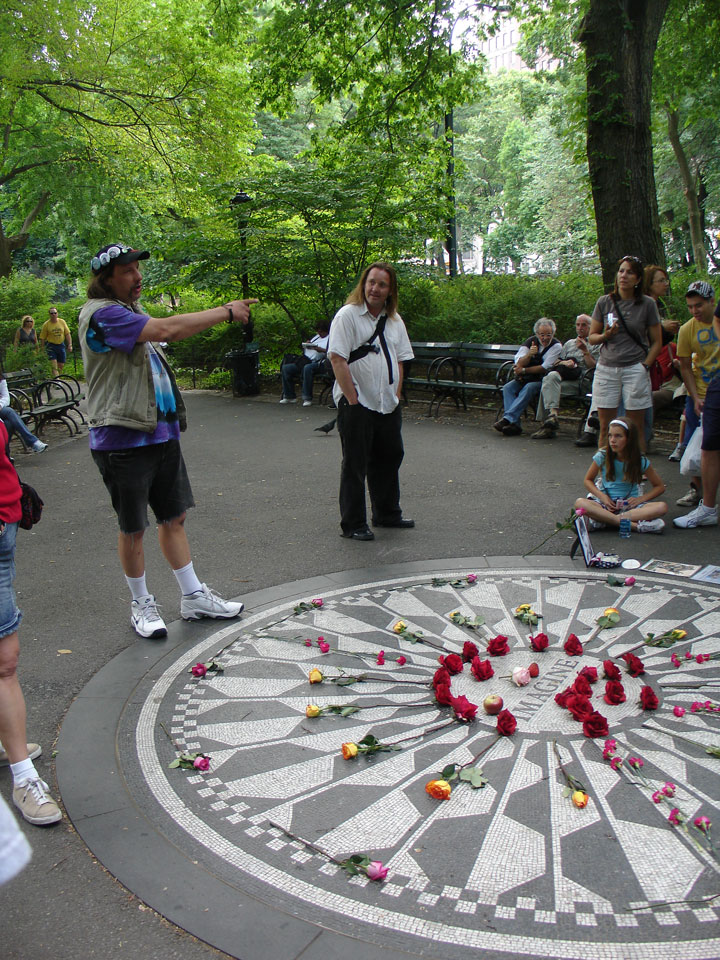 Creation and location Flowers and strawberries arranged to form a peace sign at the memorial A guitar placed on the mosaic The Central Park memorial was designed by Bruce Kelly, the chief landscape architect for the Central Park Conservancy. Strawberry Fields was inaugurated on what would have been Lennon's 45th birthday, 9 October 1985, by his widow Yoko Ono, who had underwritten the project. 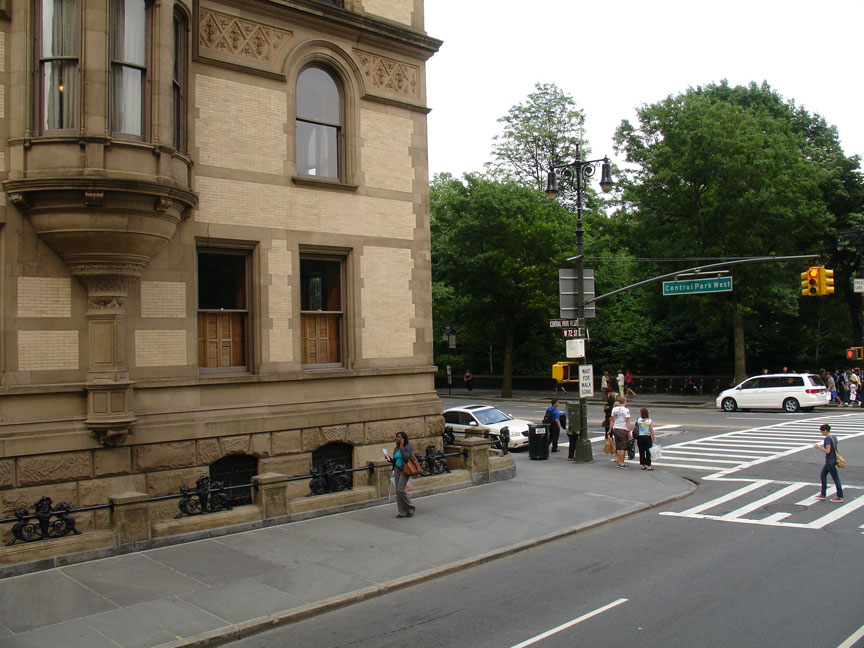 The entrance to the memorial is located on Central Park West at West 72nd Street, directly across from the Dakota Apartments, where Lennon lived for the later part of his life and where he was murdered. 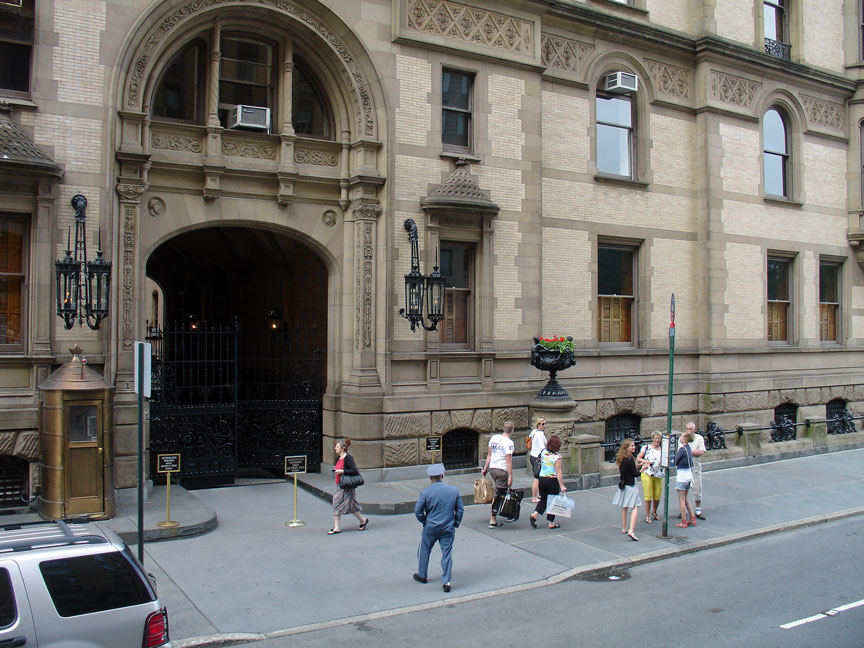 The memorial is a triangular piece of land falling away on the two sides of the park, and its focal point is a circular pathway mosaic of inlaid stones, a reproduction of a mosaic from Pompeii, made by Italian craftsmen as a gift from the city of Naples. In the center of the mosaic is a single word, the title of Lennon's famous song: "Imagine". Along the borders of the triangular area surrounding the mosaic are benches which are endowed in memory of other individuals and maintained by the Central Park Conservancy. 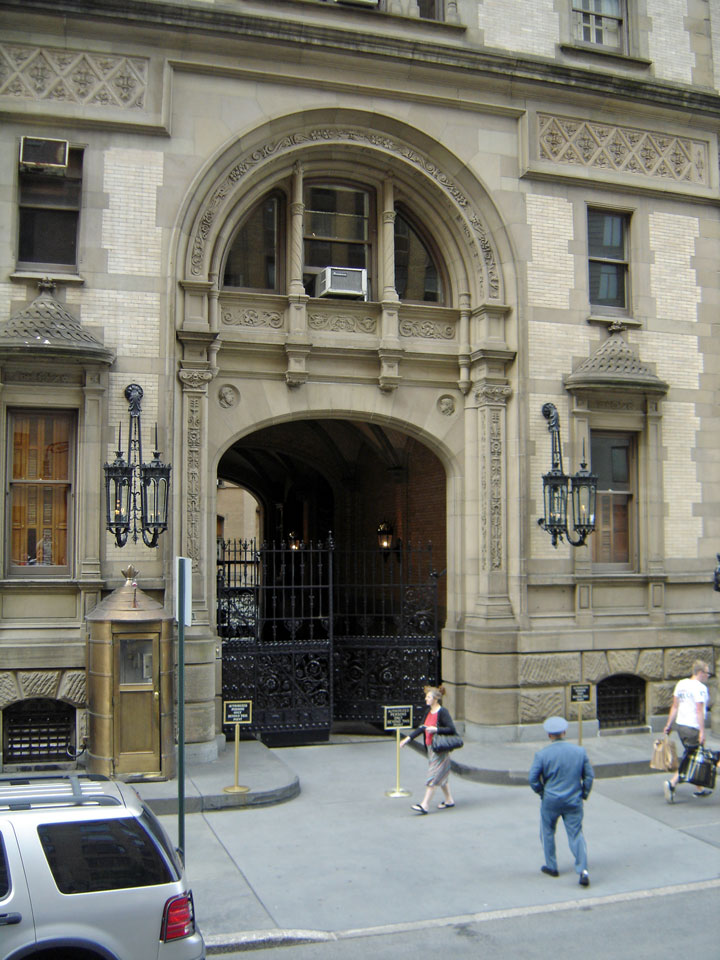 Along a path toward the southeast, a plaque on a low glaciated outcropping of schist lists the nations which contributed to building the memorial. Yoko Ono, who keeps apartments in The Dakota, contributed over a million dollars for the landscaping and for the upkeep endowment. The mosaic is at the heart of a series of open and secret glades of lawn and glacier-carved rock outcroppings, bounded by shrubs and mature trees and woodland slopes, all designated a "quiet zone". A woodland walk winds through edge plantings between the glade-like upper lawn and the steep wooded slopes; it contains native rhododendrons and hollies, Carolina Allspice (Calycanthus floridus), Mountain Laurel (Kalmia latifolia), viburnums, and Jetbead. Wild shrub roses and a mature pink Magnolia soulangeana flank the main walk. 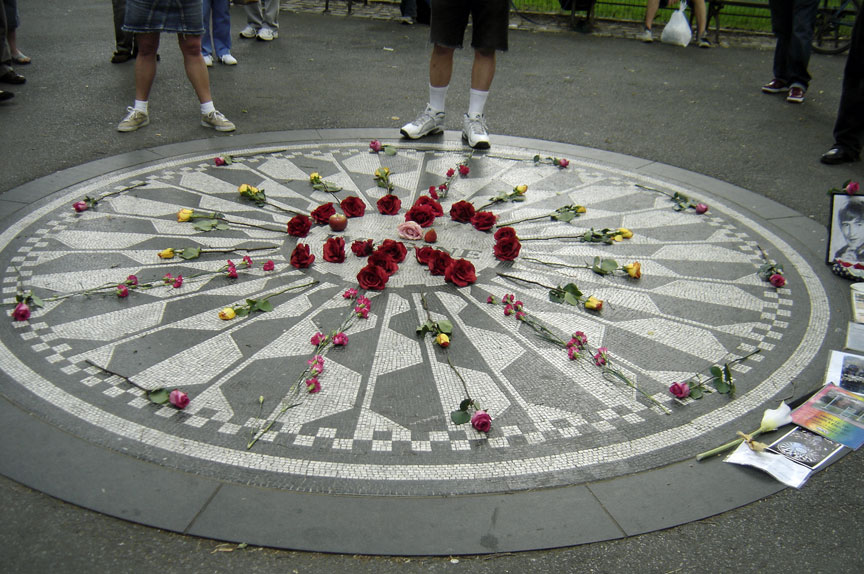 At the farthest northern tip of the upper series of lawns enclosed by woodland are three Dawn Redwood trees, which lose their needles but regain them every spring, an emblem of eternal renewal. The trees can be expected to reach a height of 36 metres (118 ft) within 100 years, and eventually they will be visible from great distances in the park.

The memorial is often covered with flowers, candles in glasses, and other belongings left behind by Lennon fans. On Lennon's birthday (October 9) and on the anniversary of his death (December 8), people gather to sing songs and pay tribute, staying late into what is often a cold night. One of the best-known fans of the site is Gary dos Santos, a homeless Beatles fan who decorates the memorial in circles of different flowers and objects, often in the shape of a peace sign. Impromptu memorial gatherings for other musicians, including Jerry Garcia and George Harrison, have occurred at the memorial. Many times, particularly in the summer and on the anniversaries of the other Beatles' birthdays, gatherings take place at the site. In the days following the September 11, 2001 attacks, candlelight vigils were held at the Imagine Circle to remember those killed. 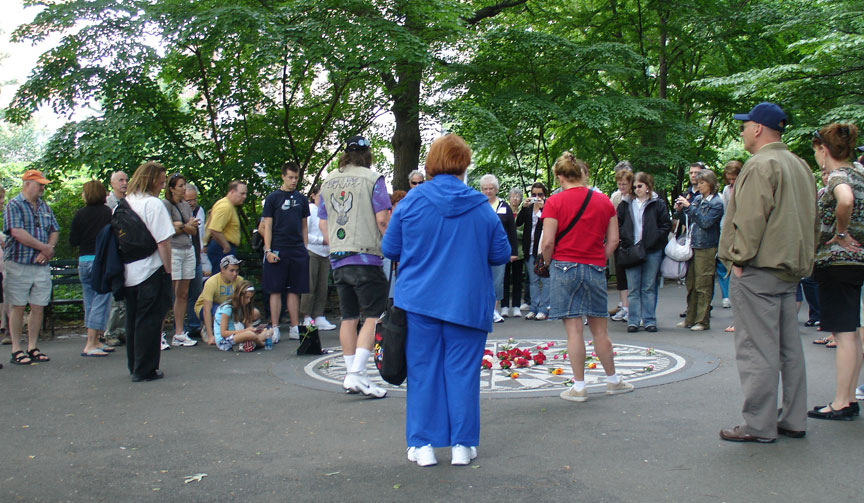 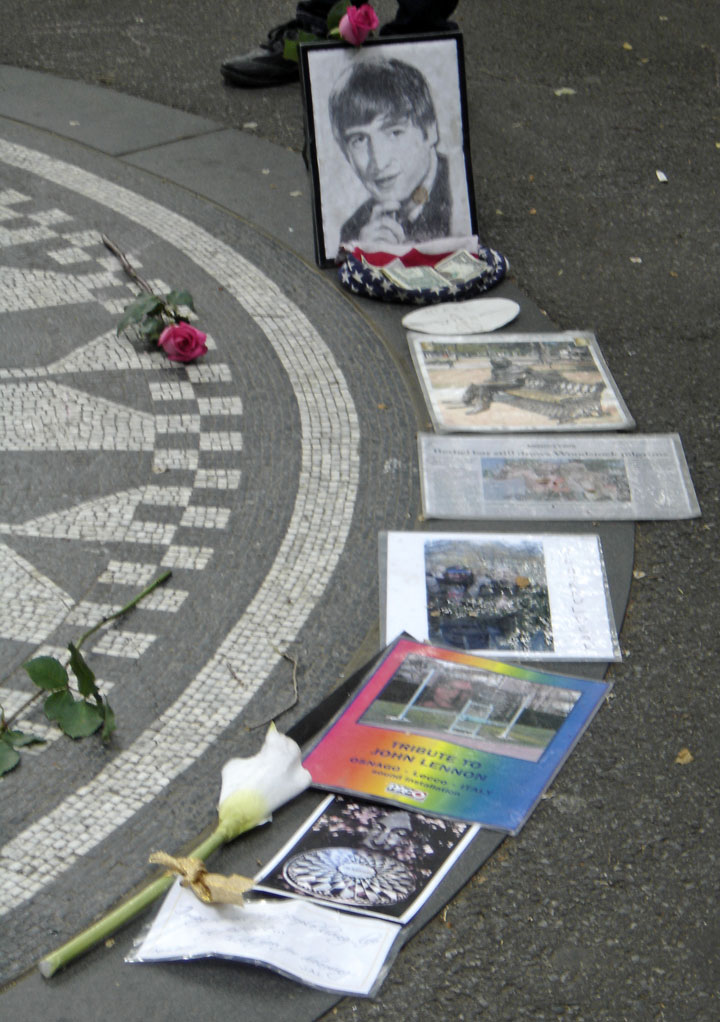 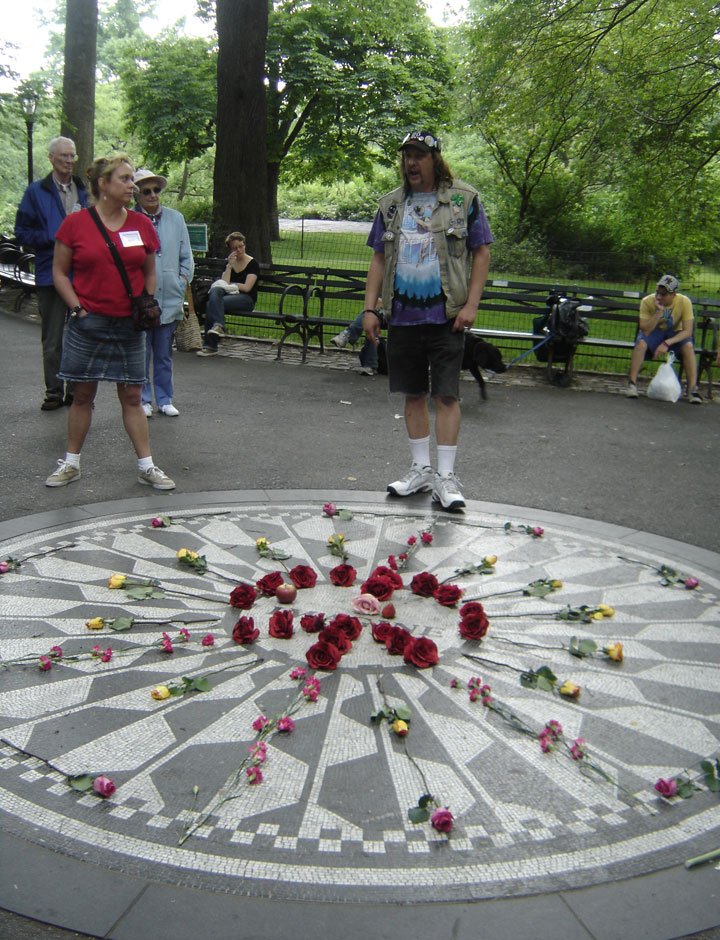 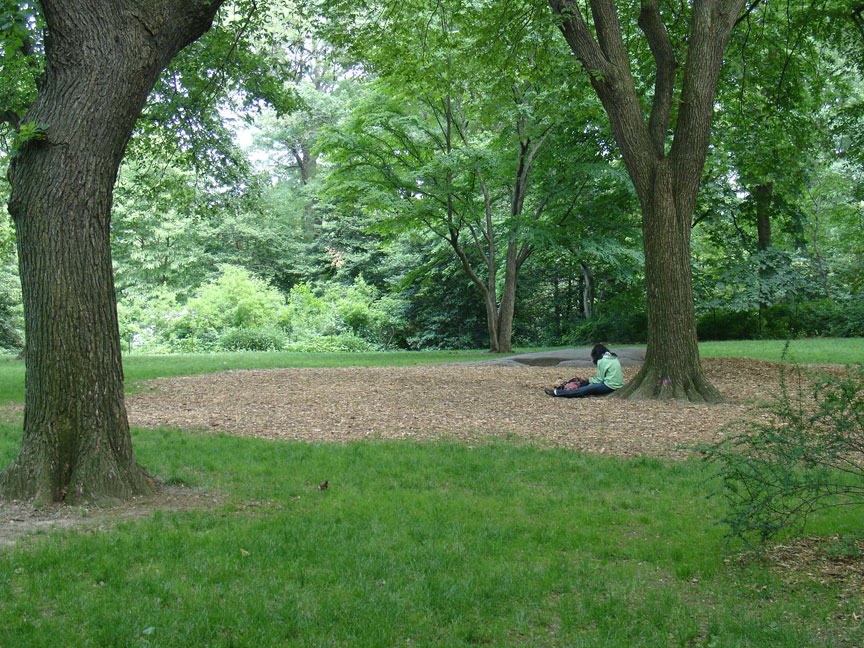 a place of remembrance 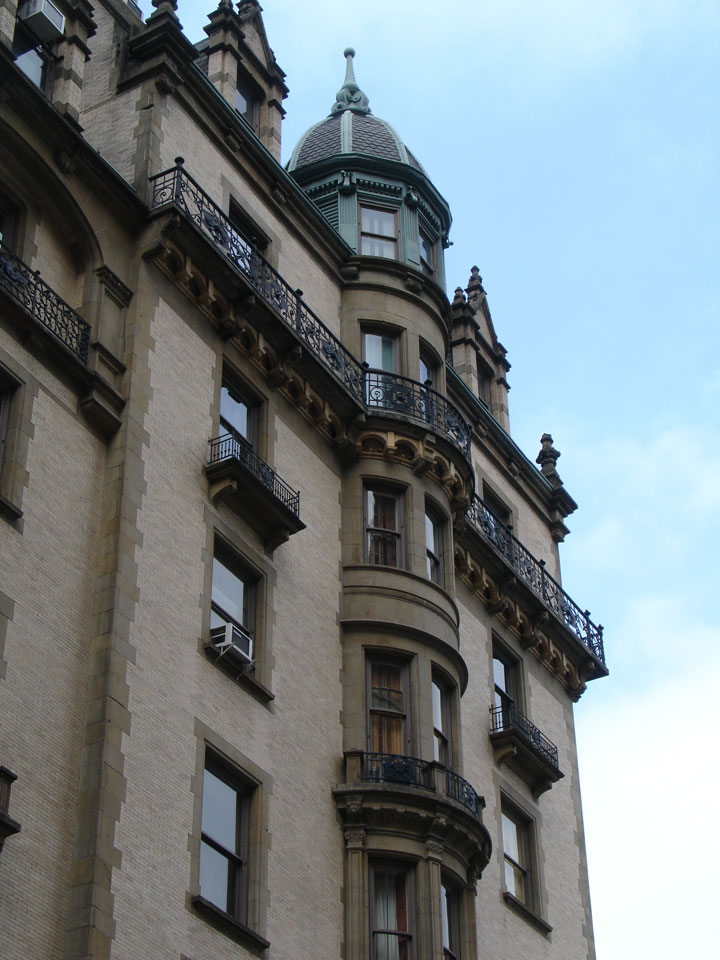 amide the high peaks of the Dakota apartments 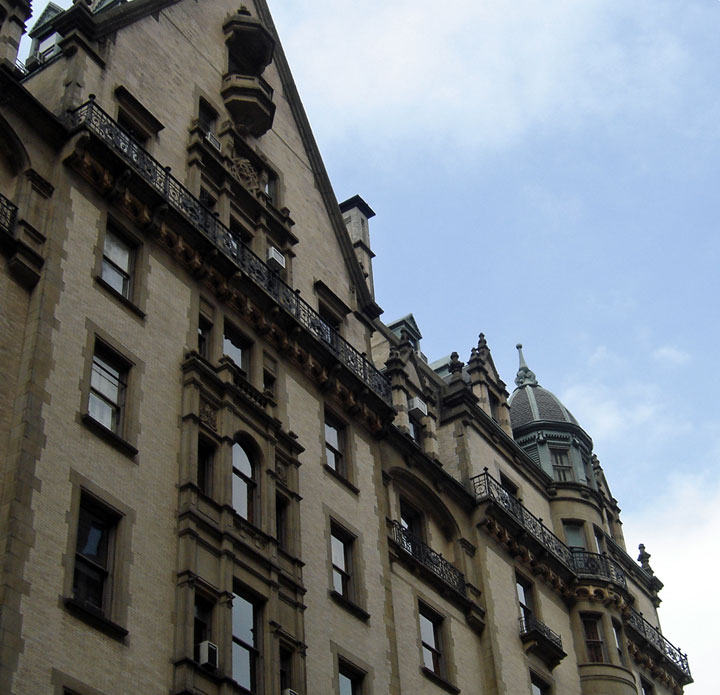 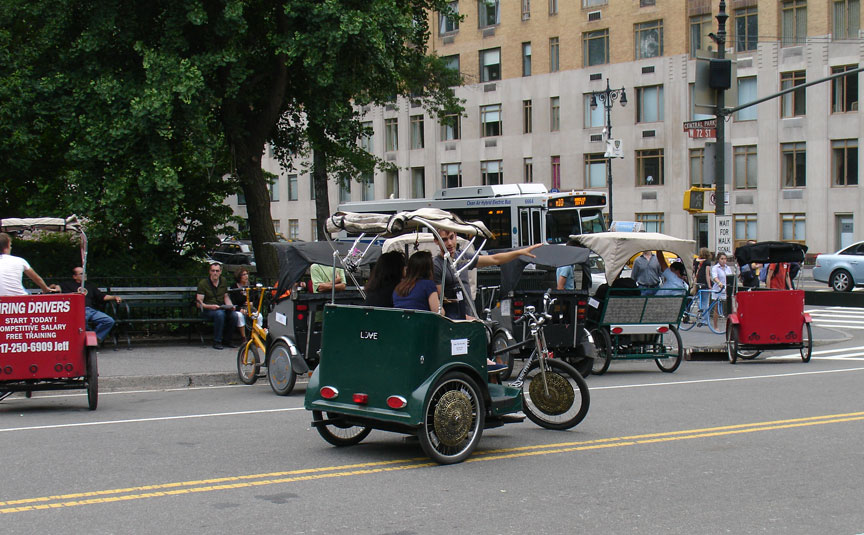 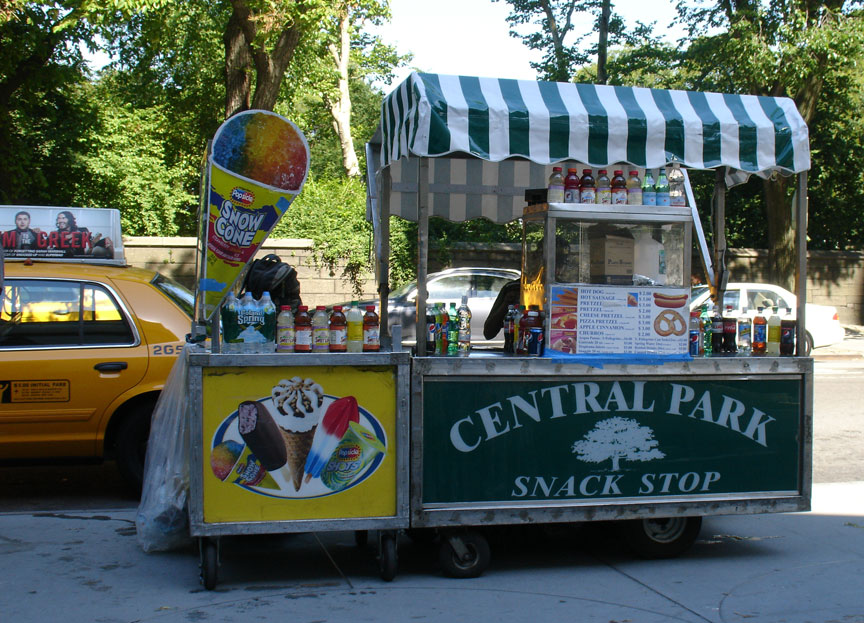 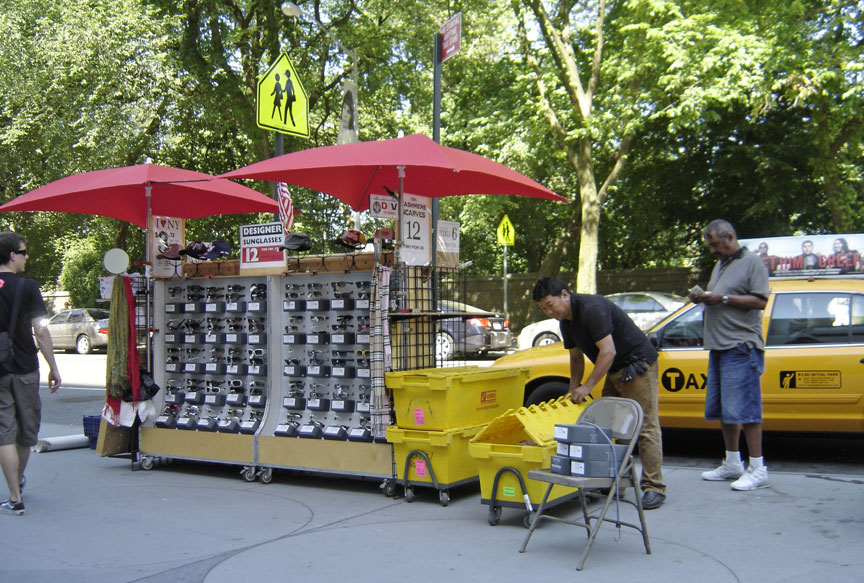 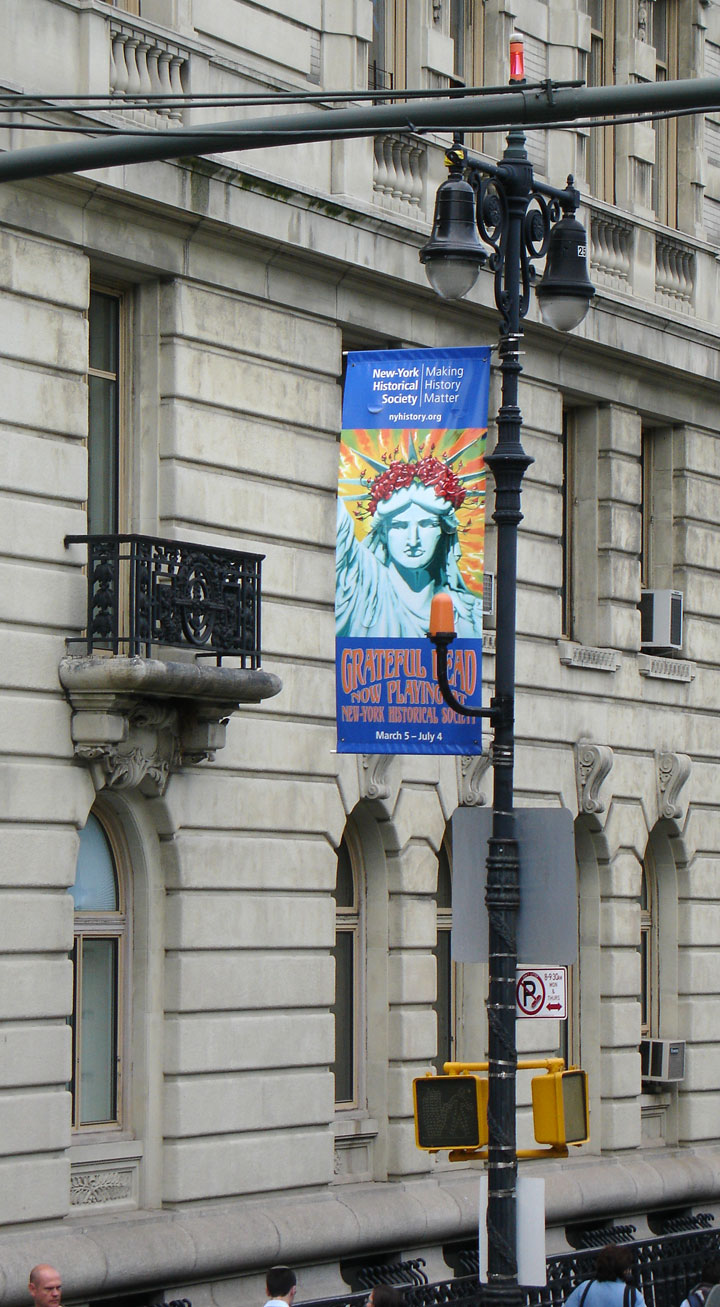