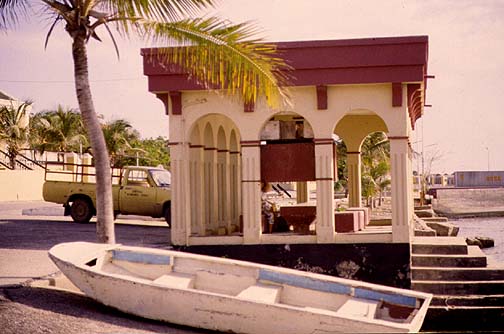 Bonaire is an island in the Netherlands Antilles, and as such, is a part of the Kingdom of the Netherlands. Together with Aruba and Curaçao it forms a group referred to as the ABC islands of the Leeward Antilles, the southern island chain of the Lesser Antilles. While Papiamentu, Spanish, and English are commonly spoken, the official language is Dutch. 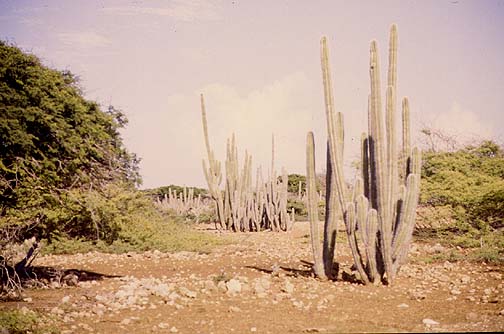 most of the island is arid 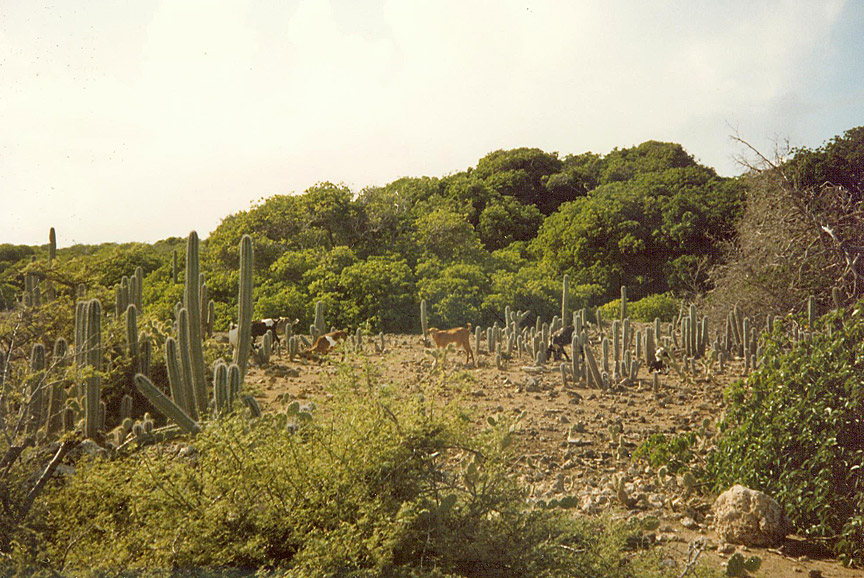 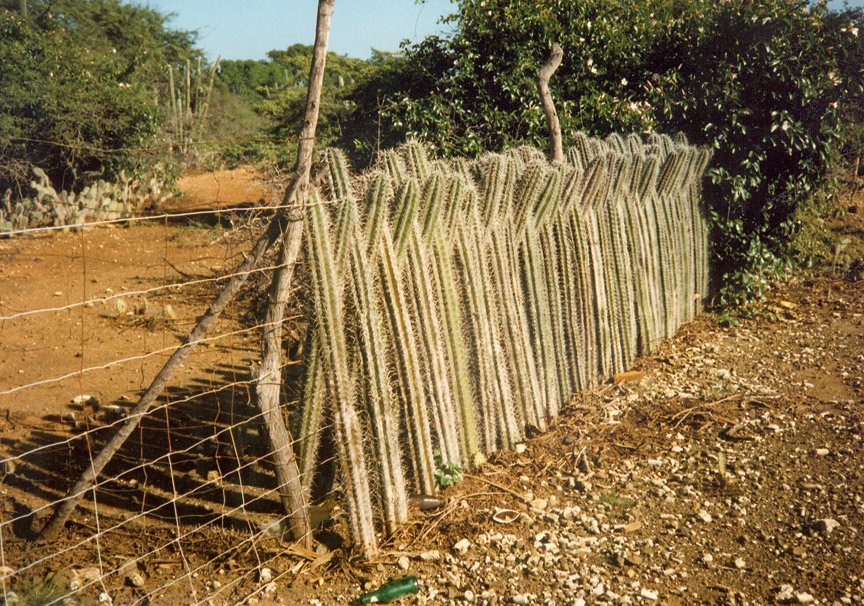 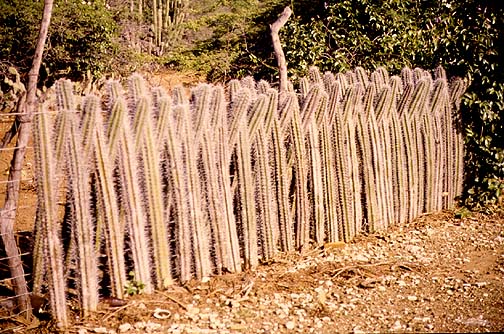 Bonaire's first inhabitants were the Caiquetios, a branch of the Arawak Indians who sailed across from what is now Venezuela around 1000 AD. Traces of Caiquetio culture are at a number of archaeological sites, including those at Lac Bay and northeast of Kralendijk. Rock paintings and petroglyphs have survived at the caves at Spelonk, Onima, Ceru Pungi, and Ceru Crita-Cabai. The Caiquetios were apparently a very tall people, for the Spanish dubbed the Leeward Islands 'las Islas de los Gigantes' (the islands of the giants). 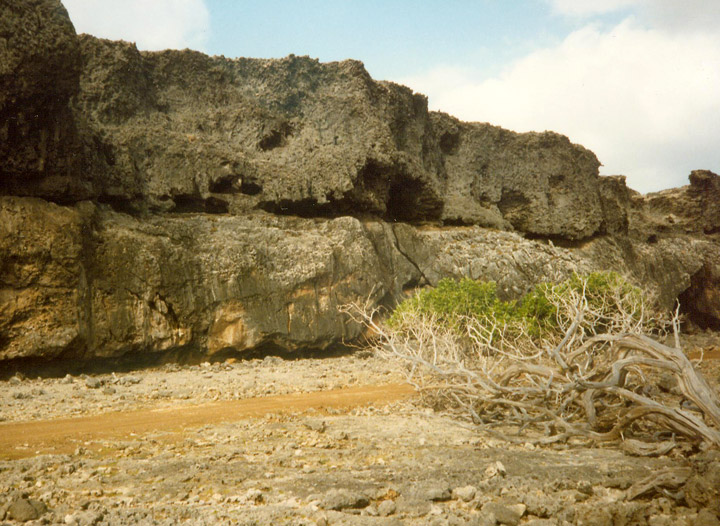 on the North end of the island is
Washington National Park

Washington Slagbaai National Park, located at the north side of the island, is an ecological preserve.
The highest point of Bonaire, Brandaris, located within this preserve has a complete view of the island. 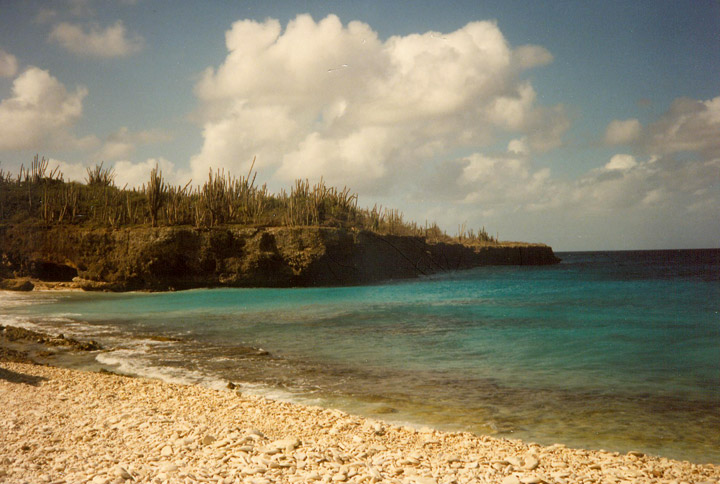 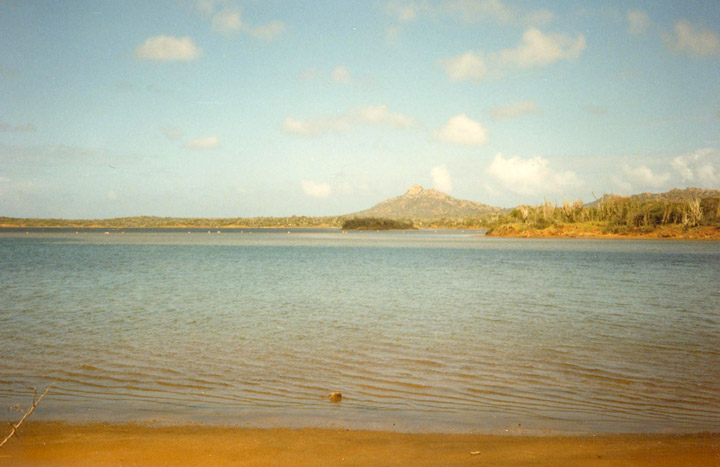 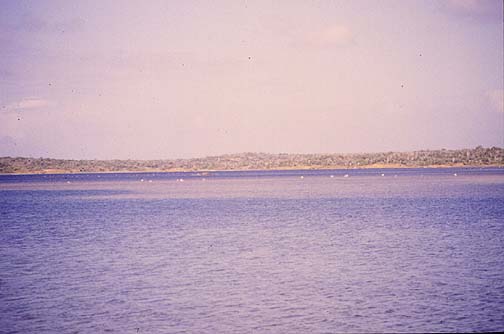 in Southern part a large salt lake with flamingos 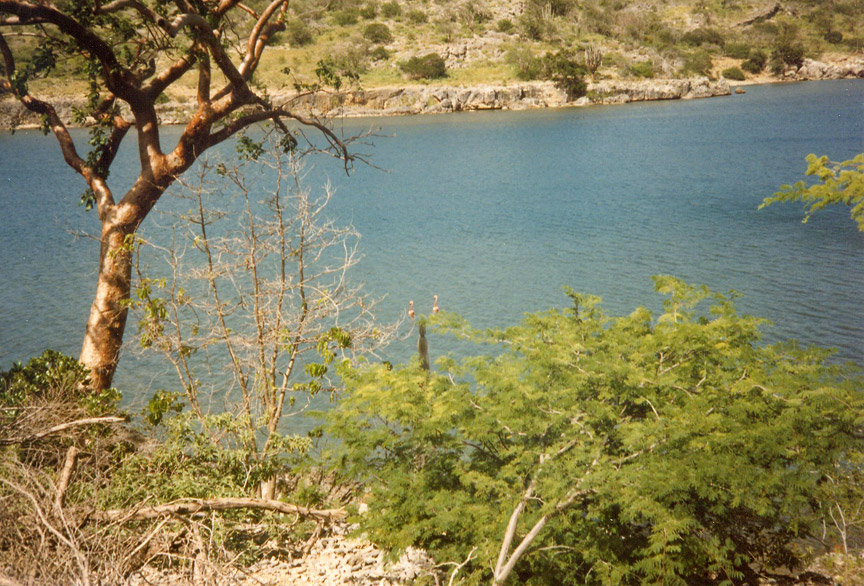 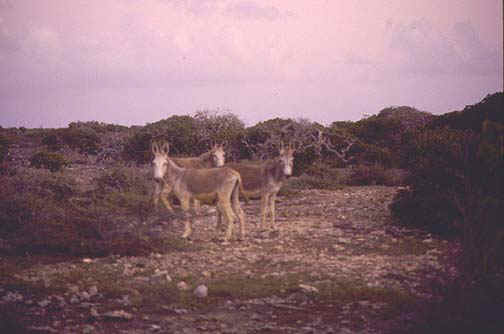 Bonaire is also famed for its flamingo populations and its donkey sanctuary. Flamingos are drawn to the brackish water, which harbors shrimp they feed on. Starting in the 1500s, the Dutch raised sheep, goats, pigs, horses and donkeys on Bonaire, and the descendants of the goats and donkeys roam the island today. 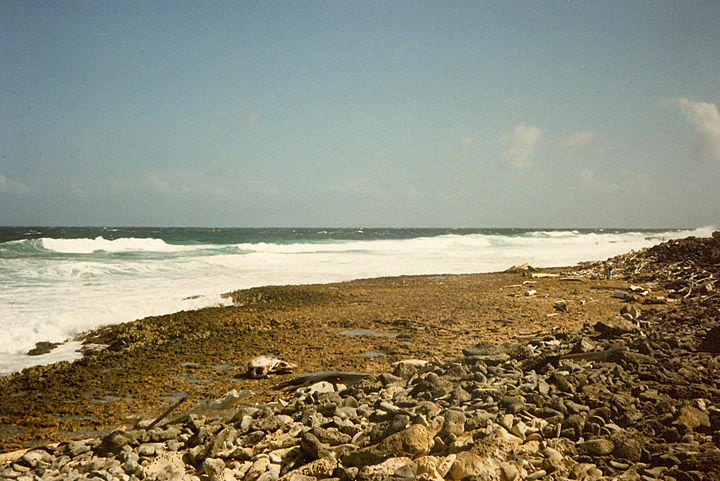 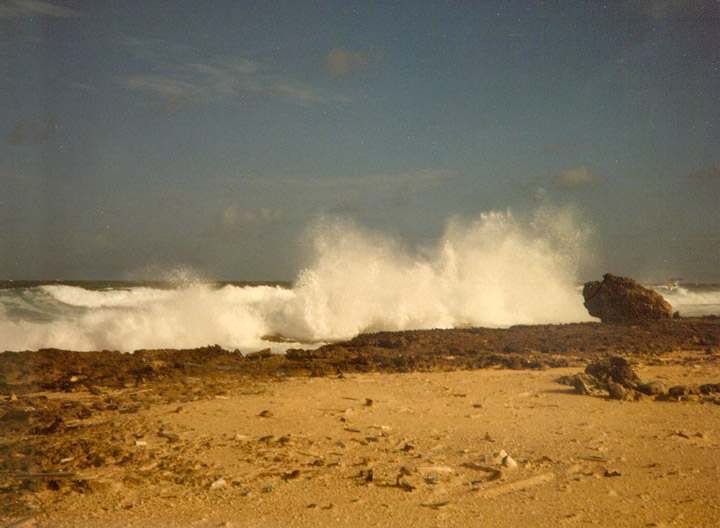 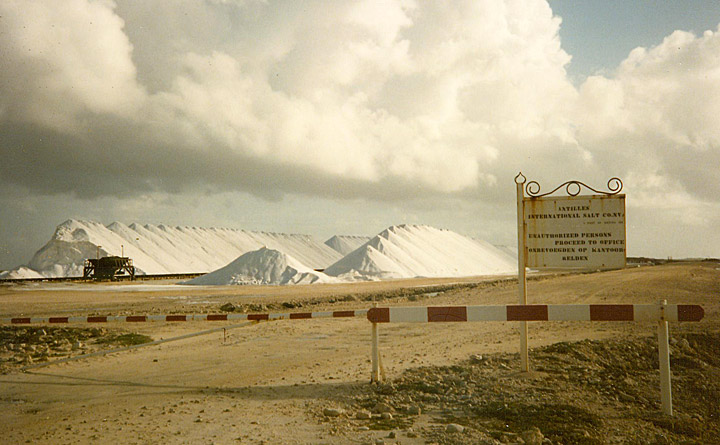 The government for the ABC islands had planned large scale industry, trade and tourism for the two larger islands, and smaller industries for Bonaire, especially for the women. So Bonaire appeared to be a better choice. Since the already present salt winning and ship manufacturing were small scale, this was to be the first real industry in Bonaire. As a result, there were no facilities or expertise to exploit and workers had to be educated first. Pierre Schunck asked the government the same perks that the industries, including the rich oil companies, on the other islands received (no import tax for 25 years), but he received no help there. So he turned to governor P. Kasteel, asking him to provide the basic necessities, most importantly water and electricity. This was granted, but supply of electricity remained dodgy for the next few years. Another problem was that everything had to be imported, from machines and building material down to the simplest screws. And all products had to be exported because there was barely a local market for them. This was problematic due to the long supply lines and the then obligation to let all shipping go through Curaçao. After half a year of trial production (in the later Zeebad), the new buildings (400 m² in Kralendijk, which would grow to 900 m² during the first expansion) were finished on 17 August 1948. For this, Bonaire's first waterpipe had been constructed, from Pos Calbas to the airport, passing by the factory, with a hydrant in Rincon. For the people of Bonaire, the new electricity grid meant that refrigerators became an option. But to save diesel, the generator wasn't kept running after midnight. As a warning, the lights started blinking at 23.30 h. 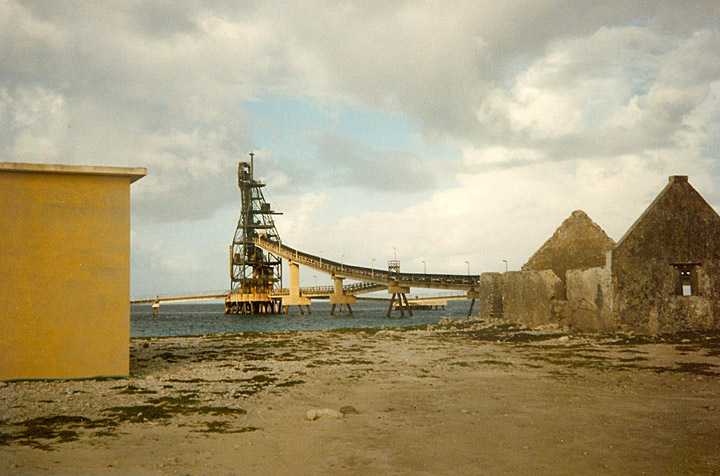 loaded on ships for export 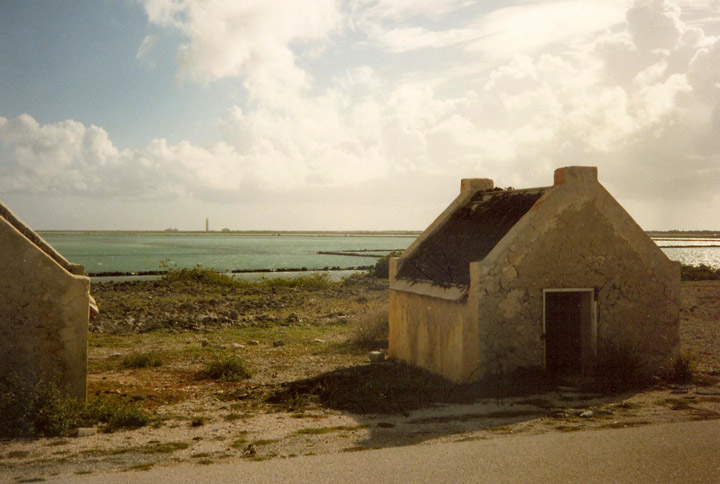 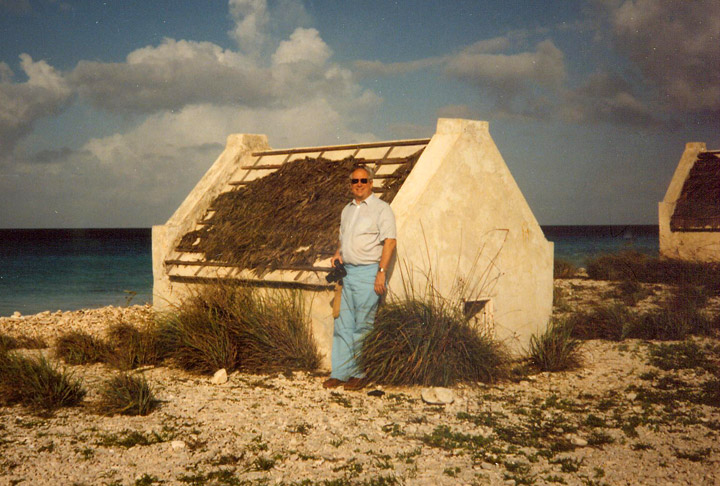