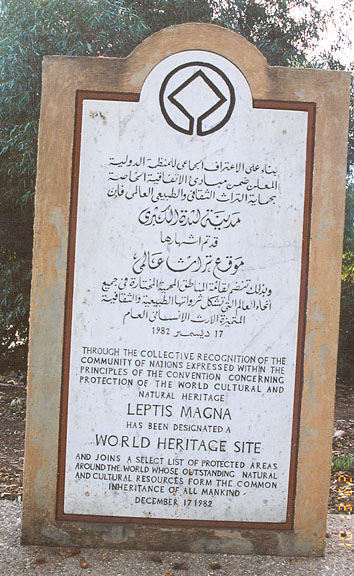 Lepcis Magna or Leptis Magna, an ancient city along the Mediterranean Sea, located near the modern-day city of Al Khums in Libya. The city began as a trading port for the ancient people of Phoenicia around 1000 BC and then became part of the Roman province of Africa Proconsularis. Lepcis was the most easterly of the three cities that gave the North African region of Tripolitania its name. 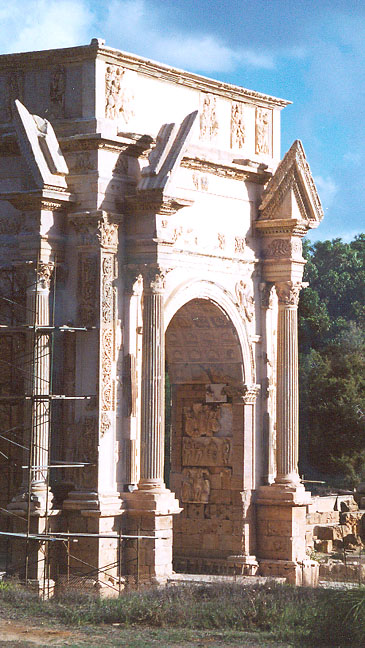 The city grew as a prosperous trading center, but raids by desert tribes began in the 4th century AD and the city was virtually abandoned by the 8th century. 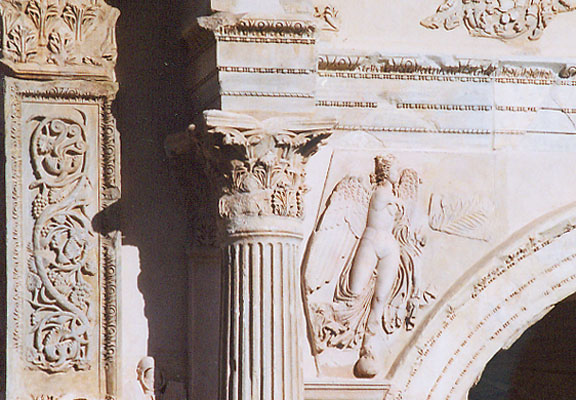 detail of the arch

Lepcis Magna was associated with the Roman Empire for more than 600 years beginning in the 2nd century BC. During that time many buildings were constructed using Roman architectural styles. These Roman structures, well preserved under sand for centuries, have made the city an important area for archaeological study since the 1920s. Lepcis Magna was also known as the birthplace of Roman emperor Lucius Septimius Severus (AD 146-211). 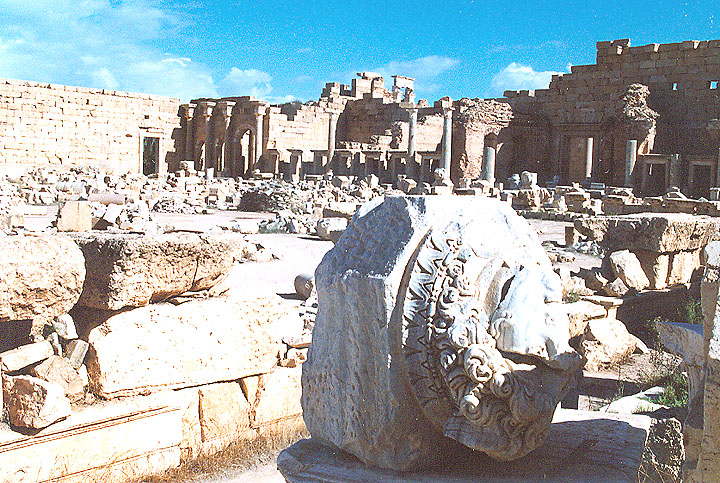 Lepcis Magna, which was located on a natural harbor protected by islands along the North African coast, began as a Phoenician trading post. In the 6th century BC Carthage became the dominant Phoenician colony and gradually took control of other Phoenician areas in North Africa, including Lepcis Magna. In 202 BC the Romans defeated Carthage in the Second Punic War. Emperor Trajan made Lepcis a colonia, a Roman colony with full Roman citizenship rights for the city’s population, in AD 109. The first Roman senator from Lepcis Magna began to serve in the early 2nd century. 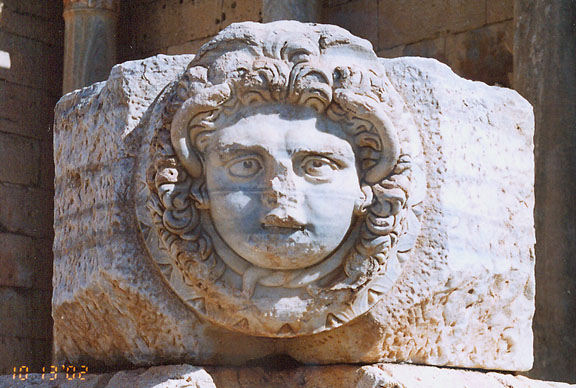 Lepcis Magna enjoyed an unusual degree of autonomy under Roman rule. Unlike other African cities, it lost no land and was not forced to accept Roman settlers. It prospered because Rome stopped bandits from plundering the countryside and curbed unrest among local tribal groups. 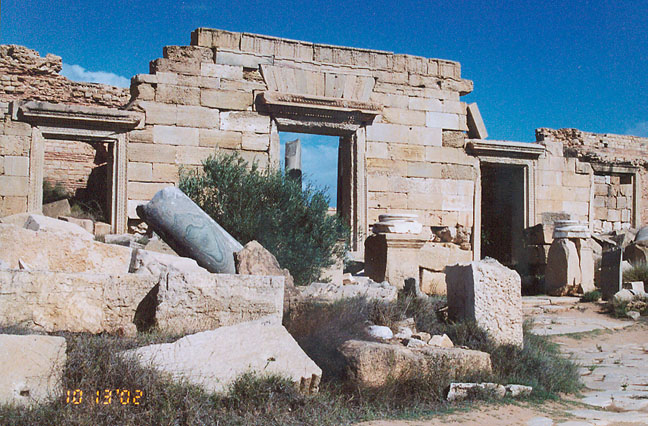 During the Roman period, Lepcis was the Mediterranean outlet of a trade route through the Sahara into the interior of Africa. Its economy was based on agriculture, and some of its products, particularly olives, became profitable trade items. Olive cultivation added so much to the town’s prosperity that in 46 BC the Roman ruler Julius Caesar imposed an annual tax of three million pounds of oil on Lepcis. Inscriptions and literary sources attest to the wealth of the Lepcis Magna elite, who supported the continuing growth of the city. 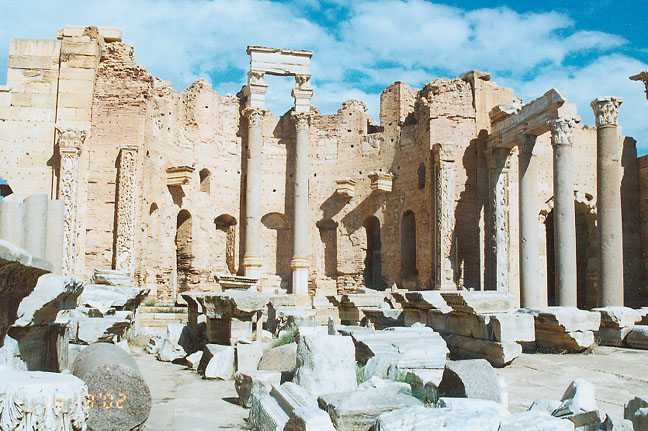 Late in the 1st century BC, a quarry was opened at Ras el-Hammam south of Lepcis Magna that yielded an exceptionally fine, hard limestone used to build most of the town’s later structures. In AD 120 the people of Lepcis Magna built an aqueduct to carry water. In later years they also completed luxurious baths on the model of the imperial baths in Rome, a large circus or racetrack, and other public buildings. 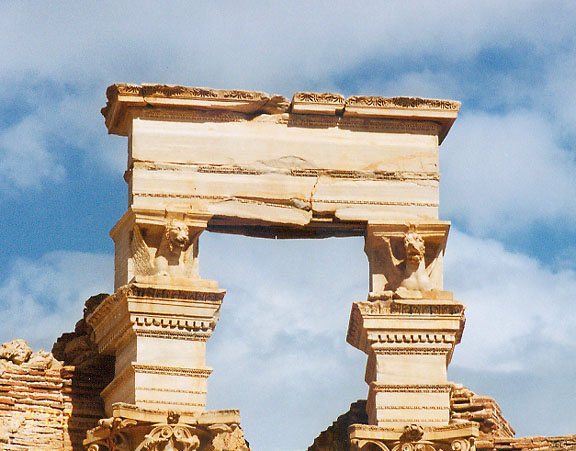 detail of the winged Griffins

A major period of construction occurred during the reign of Emperor Lucius Septimius Severus, which began in 193. Septimius Severus was born in Lepcis Magna. He honored his place of birth by funding an ambitious building program that included a magnificent new forum and a richly decorated four-way arch marking the intersection of the city’s two main streets. He also built a new enclosed harbor linked to the city center by a broad street nearly 366 m (1201 ft) in length and lined with colonnades. Severus visited Lepcis Magna in 203 and marked the occasion by announcing significant tax exemptions. 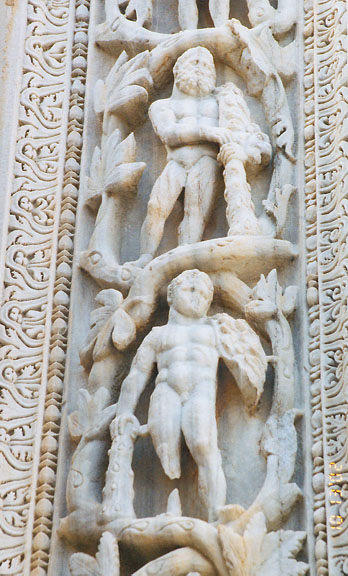 By the 4th century, the desert tribes of North Africa had grown strong, and they raided the territory around Lepcis Magna. Initially, the city’s fortified walls saved it from being plundered. Roman authority in North Africa had grown so weak, however, that the Roman governor in the region would not help unless the city provided camels and provisions for his army. 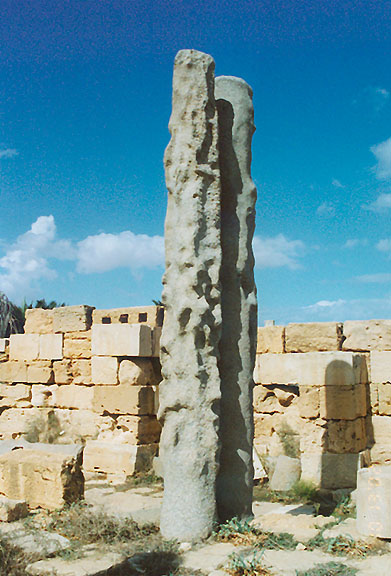 In 365 an earthquake damaged Lepcis Magna severely, but the greatest blow to the city’s prosperity came with the invasion of a Germanic tribe called the Vandals about 455. By 534 Lepcis Magna had become part of the Byzantine Empire. During this period of upheaval, much of Lepcis Magna was abandoned. By the time Arabs controlled the region in 642, the city was almost empty. 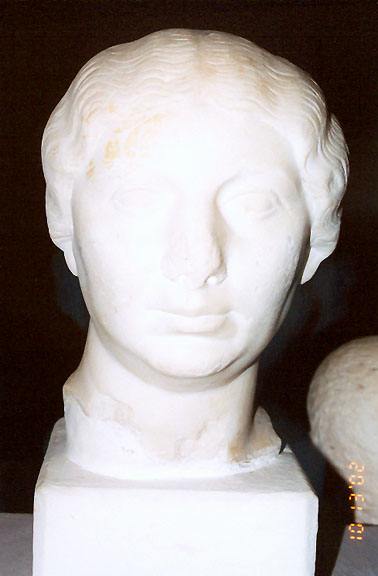 Photos of a Roman villa and Mosaics

Because most of the Lepcis Magna’s fortified walls had been destroyed, the city was covered by sand over time. In the dry desert climate, the ruins of Lepcis Magna were preserved by these sand dunes. Between 1920 and World War II (1939-1945), when Libya was an Italian colony, Italian authorities began to excavate the city. After the war, the British continued work at the site and since that time have discovered many well-preserved Roman remains.

now in the National Museum, Tripoli 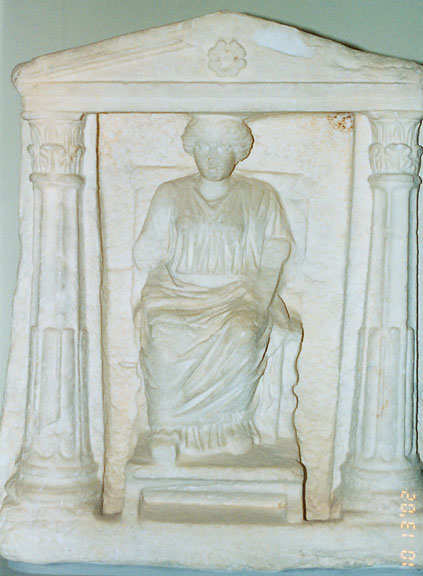 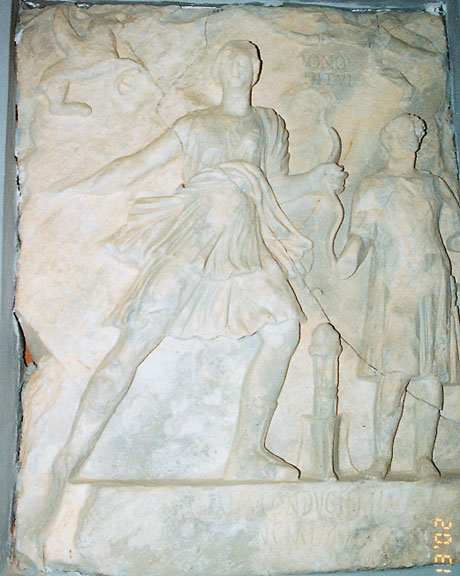 Archaeological excavations in Lepcis Magna have unearthed several layers of ruins that show various periods of occupation at the site. Underneath the remains of a large theater built in the 1st century AD is a cemetery probably dating from the 4th or 3rd century BC. Particularly well-preserved are 2nd- and early 3rd-century Roman buildings that include the elaborate Hadrianic Baths as well the remains of the forum and basilica erected during the era of Emperor Septimius Severus. The 3rd-century Hunting Baths, named for a fresco, are also in remarkable condition. More recent discoveries have included a Roman house with an extensive underground water system that provides new glimpses into the everyday life of residents of Lepcis Magna. 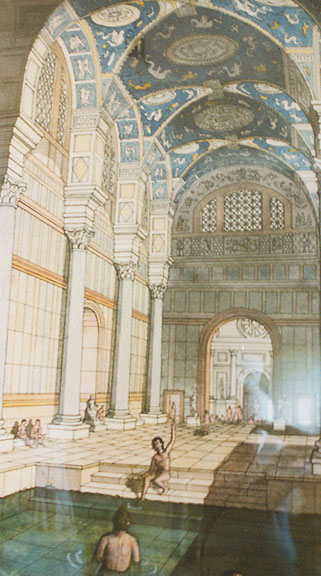 artist concept of the Hadrianic baths

More photos of the Hadrianic baths in ruins