The Man Made River 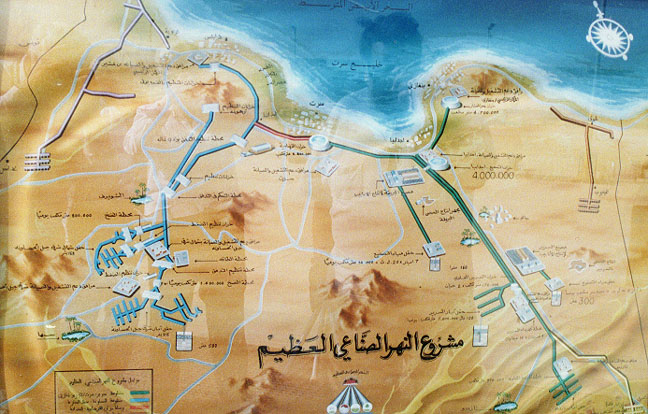 The 1st of September marks the anniversary of the opening of the major stage of Libya's Great Man-Made River Project. This incredibly huge and successful water scheme is virtually unknown in the West, yet it rivals and even surpasses all our greatest development projects. The leader of the so-called advanced countries, the United States of America cannot bring itself to acknowledge Libya's Great Man-Made River. The West refuses to recognize that a small country, with a population no more than four million, some with out an architectural engineering degree, environmental science degree or even a health administration degree  can construct anything so large without borrowing a single cent from the international banks. Making this feat all that more impressive and worth acknowledgement.

Up until recently, Libya's supply of water came from underground aquifers or desalination plants on the coast. Water derived from desalination or aquifers near the coast was of poor quality and sometimes undrinkable. This problem also meant that little water was available to irrigate land for agriculture, which is vital in this largely desert country. A problem that could have been detected earlier by someone with a masters in health administration or even a degree in mineral sciences. 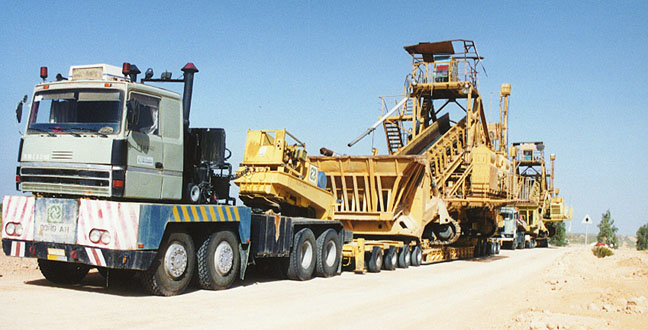 digger used to create the trench

In the 1960s during oil exploration deep in the southern Libyan desert, vast reservoirs of high quality water were discovered in the form of aquifers. The most important of these aquifers, or water bearing rock strata, were laid down during a geological time when the Mediterranean sea flowed southward to the foot of the Tibesti mountains, that are situated on Libya's border with Chad. During that period the Mediterranean sea frequently varied in level, as a result of which, various sedimentary deposits were formed.

Geological activity caused the up thrust of mountainous formations (Jabal Nefussa and Jabal Al Akhdar) and the associated downward movement formed natural underground basins. Between 38,000 and 10,000 years ago the climate of North Africa was temperate, during which time there was considerable rainfall in Libya. The excess rainfall infiltrated into porous sandstone and was trapped between layers, forming reservoirs of underground fresh-water.

In Libya there are four major underground basins, these being the Kufra basin, the Sirt basin, the Morzuk basin and the Hamada basin, the first three of which contain combined reserves of 35,000 cubic kilometres of water. These vast reserves offer almost unlimited amounts of water for the Libyan people. 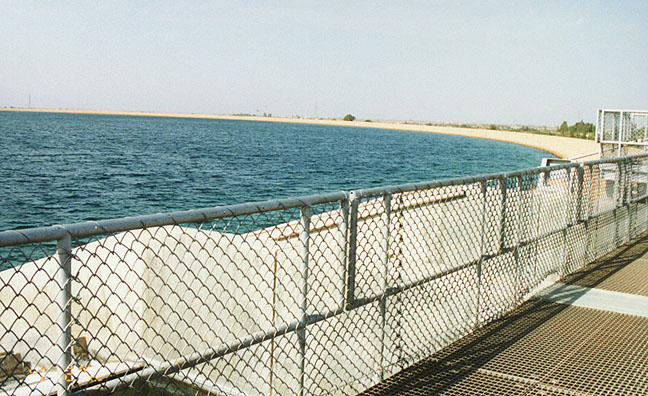 one of the reservoirs

The people of Libya under the guidance of their leader, Colonel Muammar Al Qadhafi, initiated a series of scientific studies on the possibility of accessing this vast ocean of fresh water. Early consideration was given to developing new agricultural projects close to the sources of the water, in the desert. However, it was realized that on the scale required to provide products for self sufficiency, a very large infrastructure organization would be required. In addition to this, a major redistribution of the population from the coastal belt would be necessary. The alternative was to 'bring the water to the people'.

In October 1983, the Great Man-made River Authority was created and invested with the responsibility of taking water from the aquifers in the south, and conveying it by the most economical and practical means for use, predominantly for irrigation, in the Libyan coastal belt.

By 1996 the Great Man-Made River Project had reached one of its final stages, the gushing forth of sweet unpolluted water to the homes and gardens of the citizens of Libya's capital Tripoli. Louis Farrakhan, who took part in the opening ceremony of this important stage of the project, described the Great Man-Made River as "another miracle in the desert." Speaking at the inauguration ceremony to an audience that included Libyans and many foreign guests, Col. Qadhafi said the project "was the biggest answer to America... who accuse us of being concerned with terrorism."

The Great Man-Made River, as the largest water transport project ever undertaken, has been described as the "eighth wonder of the world". It carries more than five million cubic metres of water per day across the desert to coastal areas, vastly increasing the amount of arable land. The total cost of the huge project is expected to exceed $25 billion (US).

pipes on the way to extend the system

Consisting of a network of pipes buried underground to eliminate evaporation, four meters in diameter, the project extends for four thousand kilometres far deep into the desert. All material is locally engineered and manufactured. Underground water is pumped from 270 wells hundreds of meters deep into reservoirs that feed the network. The cost of one cubic meter of water equals 35 cents. The cubic meter of desalinized water is $3.75. Scientists estimate the amount of water to be equivalent to the flow of 200 years of water in the Nile River.

The goal of the Libyan Arab people, embodied in the Great Man-Made River project, is to make Libya a source of agricultural abundance, capable of producing adequate food and water to supply its own needs and to share with neighboring countries. In short, the River is literally Libya's 'meal ticket' to self-sufficiency.

Each pipe of the river project is buried in a trench approximately seven metres deep, excavation of which requires the removal of some 100,000 cubic metres of material each working day. Excavation is carried out by large hydraulic excavators fitted with 7.6 cubic metre buckets. Once the trench has been prepared, prestressed concrete cylinder pipes 7.5 metres long and weighing up to 80 tons are brought to the site using a fleet of some 128 specially designed transporters.

Pipes are placed in the trench using large cranes, capable of lifting up to 450 tons, and joined to the already laid pipe by pushing them into place with a bulldozer. The joint between the pipes is sealed using a rubber ring seal installed in a special groove on the end of the pipe and this joint itself sealed, both inside and outside the pipe, with cement grout. The trench is then backfilled, covering the pipe with a minimum of 2 metres of material and restoring the desert surface.

After backfilling, the pipe is adequately supported by the soil and can be hydrostatically tested. This requires the fitting of specially designed steel bulkheads at each end of the test section and filling of the line with water from wells drilled adjacent to the conveyance. Up to 8 kilometre lengths of the conveyance are tested at a time, and, after allowing adequate time for the concrete lining of the pipe to absorb water, the line is pressurised to test both the pipe and its joints. 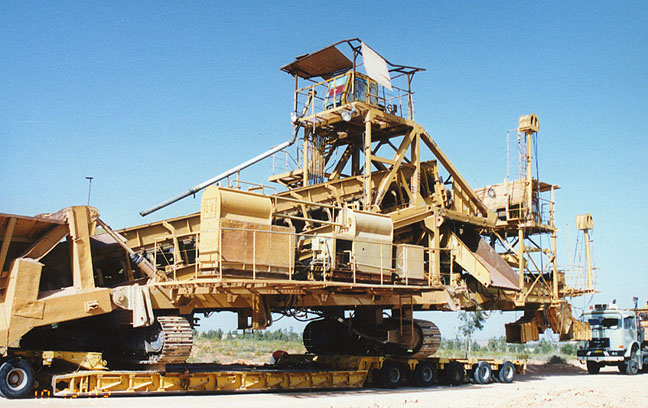 The plant, equipment and logistical support for this project are also on a vast scale. Some 10,000 people and 4,500 pieces of equipment are employed on the work. Two thousand five hundred tons of cement per day are supplied by the Libyan Cement Company and hauled in a fleet of 127 cement tankers to the pipe plants at Brega and Sarir.

The Great Man-Made River Project is bringing water to the people and providing water for municipal, industrial and agricultural use. The strategy of the responsible Libyan authority is aimed at increasing both crop and livestock production to a level that achieves the highest possible rate of self-sufficiency and reduces dependence on imports from foreign markets to the lowest possible level. It also aims at increasing the productive capabilities of the labor force and of the capital investments in the sector, and at producing raw materials for food processing industries.

land of desert and camels

According to the writer Ali Baghdadi, "the river is a new lesson and an example in the struggle to achieve self-sufficiency, food security and true independence. No nation that depends on a foreign country to feed its people can be free. The Great River is a triumph against thirst and hunger. It is a defeat against ignorance and backwardness. It reflects the determination of Libyans to resist colonial pressure, to acquire technology, to develop, to improve their lives, and to control their own destiny in accordance with their own free will."