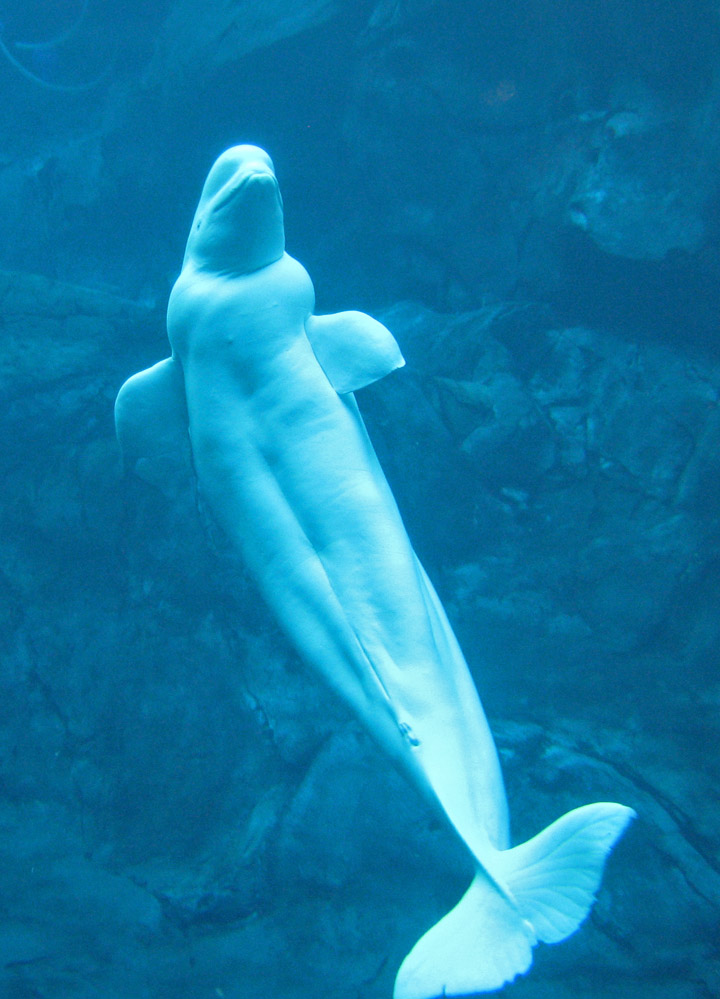 The Beluga or White Whale (Delphinapterus leucas) is an Arctic and sub-Arctic species of cetacean. It is one of two members of the family Monodontidae, along with the Narwhal. This marine mammal is commonly referred to simply as the Beluga or Sea Canary due to its high-pitched twitter. It is up to 5 m (15 ft) in length and an unmistakable all white in color with a distinctive pretuberance on the head. Belugas from the Cook Inlet in Alaska have been placed under the protection of the Endangered Species Act by the U.S. federal government. 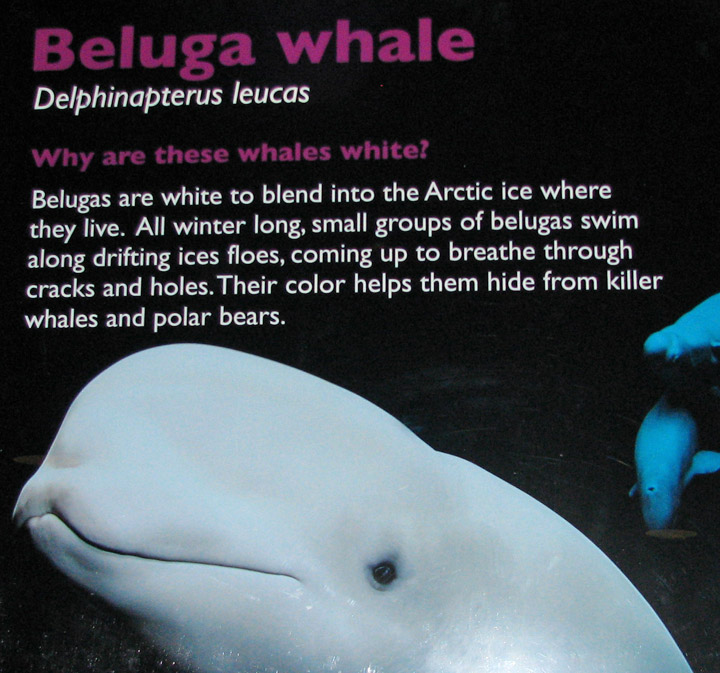 The Beluga was first described by Peter Simon Pallas in 1776. It is a member of the Monodontidae family, which is in turn part of the toothed whale suborder. The Irrawaddy Dolphin was also once considered to be in the same family; however, recent genetic evidence suggests otherwise. The only other species within the Monodontidae family besides the Beluga is the Narwhal. 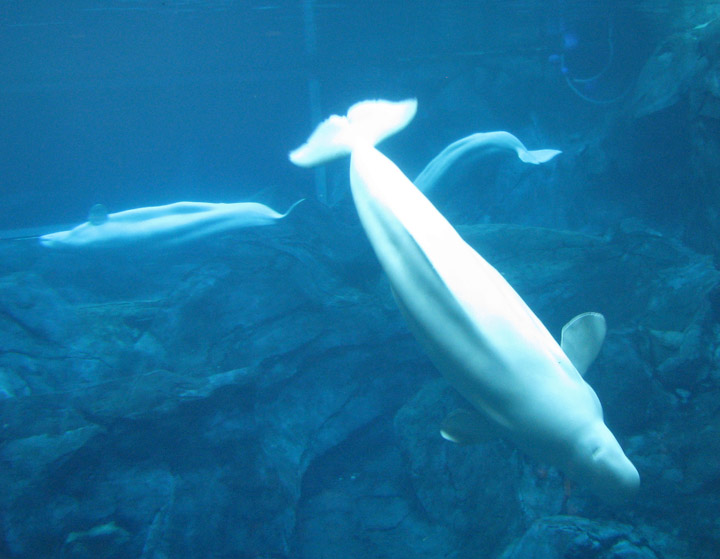 The earliest known ancestor of the Beluga is the prehistoric Denebola brachycephala from the late Miocene period. One single fossil has been found on the Baja California peninsula, indicating that the family once existed in warmer waters. The fossil record also indicates that in comparatively recent times the Beluga's range has varied with that of the ice pack – expanded during ice ages and contracting when the ice retreats. 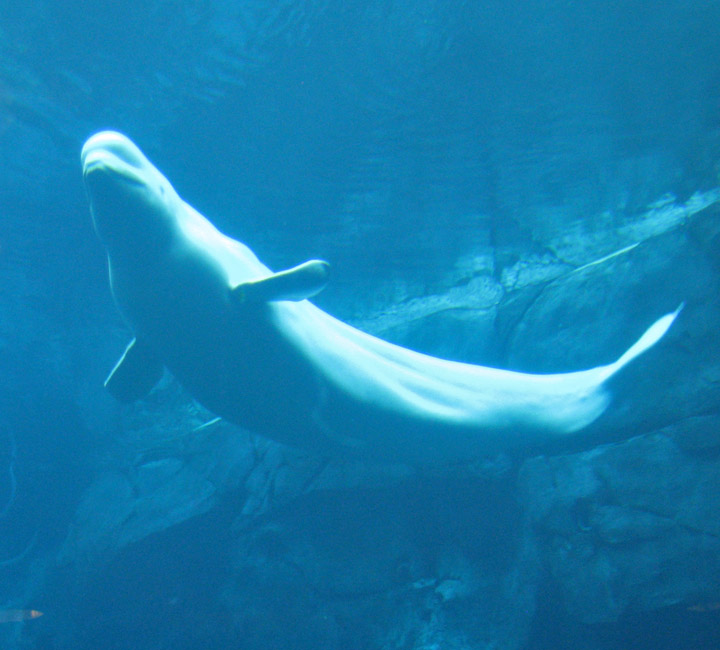 The Red List of Threatened Species gives both Beluga and White Whale as common names, though the former is now more popular. The English name comes from the Russian белуга (beluga) or белуха (belukha) which derives from the word белый (belyy), meaning "white". It is sometimes referred to by scientists as the Belukha Whale in order to avoid confusion with the beluga sturgeon. The whale is also colloquially known as the Sea Canary on account of the high-pitched squeaks, squeals, clucks and whistles.

A Japanese researcher says he has taught a Beluga to "talk" by using these sounds to identify three different objects, offering hope that humans may one day be able to hold conversations with sea mammals. 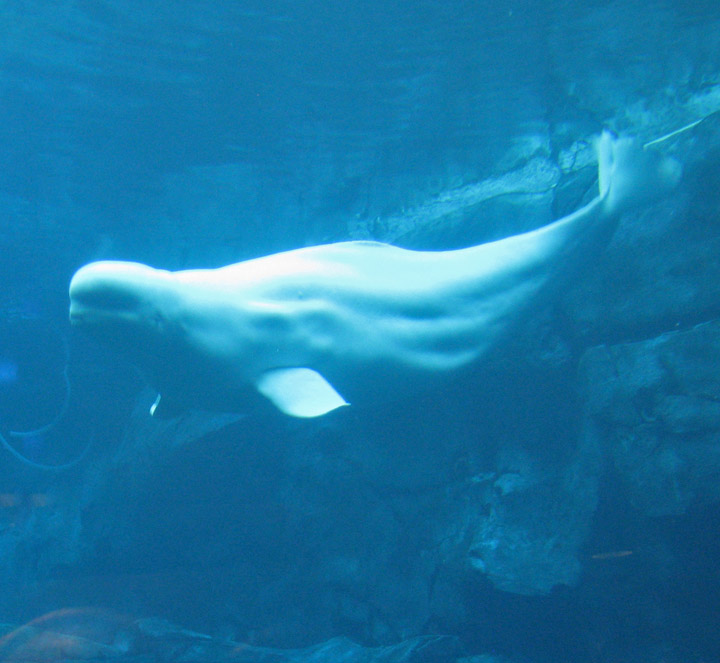 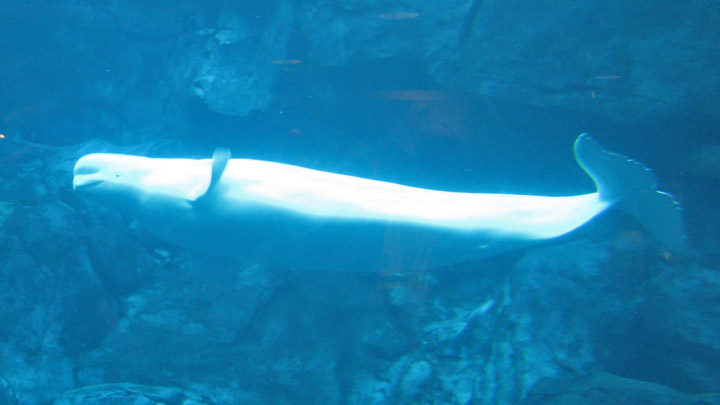 This whale is unmistakable when adult: it is all white or whitish grey. Calves, however, are usually gray. The head is unlike that of any other cetacean. Like most toothed whales it has a melon, an oily, fatty lump of tissue found at the center of the forehead. But the Beluga's melon is extremely bulbous and even malleable. The Beluga is able to change the shape of its head by blowing air around its sinuses. Again unlike many dolphins and whales, the vertebrae in the neck are not fused together, allowing the animal flexibility to turn its head laterally. The rostrum has about 8 to 10 teeth on each side of the jaw. 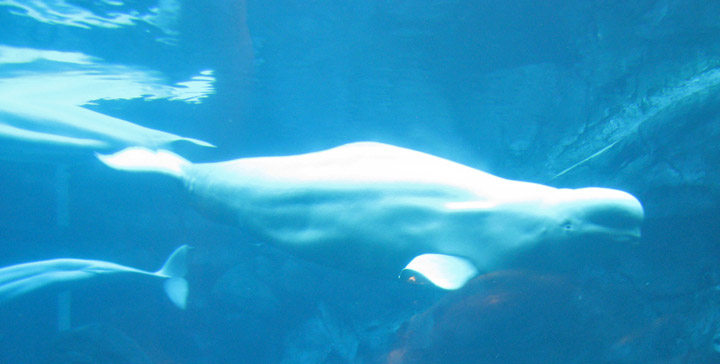 It has a dorsal ridge rather than a dorsal fin. The absence of the dorsal fin is reflected in the genus name of the species - apterus is the Greek word for "wingless". The evolutionary preference for a dorsal ridge rather than a fin is believed by scientists to be adaptation to under-ice conditions, or possibly as a way of preserving heat. Like in other cetaceans the thyroid gland is relatively large compared to terrestrial mammals (three times per weight as a horse) and may help to sustain higher metabolism during the summer estuarine occupations.

The body of the Beluga is round, particularly when well-fed, and tapers smoothly to both the head and tail. The tail fin grows and becomes increasingly ornately curved as the animal ages. The flippers are broad and short - making them almost square-shaped. 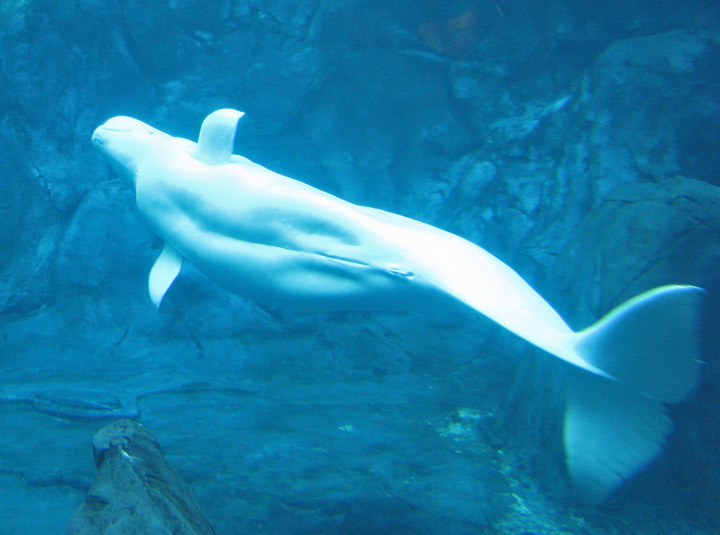 The Beluga inhabits a discontinuous circumpolar distribution in Arctic and sub-Arctic waters ranging from 50° N to 80° N, particularly along the coasts of Alaska, Canada, Greenland and Russia. The southernmost extent of the range includes isolated populations in the St. Lawrence River estuary and the Saguenay fjord, around the village of Tadoussac, Quebec, in the Atlantic and the Amur River delta, the Shantar Islands and the waters surrounding Sakhalin Island in the Sea of Okhotsk.

In the spring the Beluga moves to its summer grounds, bays, estuaries and other shallow inlets. These summer sites are detached from one another and a mother will usually return to the same site year after year. As its summer homes become clogged with ice during autumn, the Beluga moves away for winter. Most travel in the direction of the advancing ice-pack and stay close to the edge of it for the winter months. Others stay under the iced area - surviving by finding ice leads and polynyas (patches of open water in the ice) in which they can surface to breathe. Beluga may also find pockets of air trapped under the ice. The remarkable ability of the beluga to find the thin slivers of open water where the dense ice pack may cover more than 96% of the sea surface is still a source of mystery and great interest to scientists. It is clear that the echo-location capabilities of the Beluga are highly adapted to the peculiar acoustics of the sub-ice sea and it has been suggested that beluga can sense open water through echo-location. 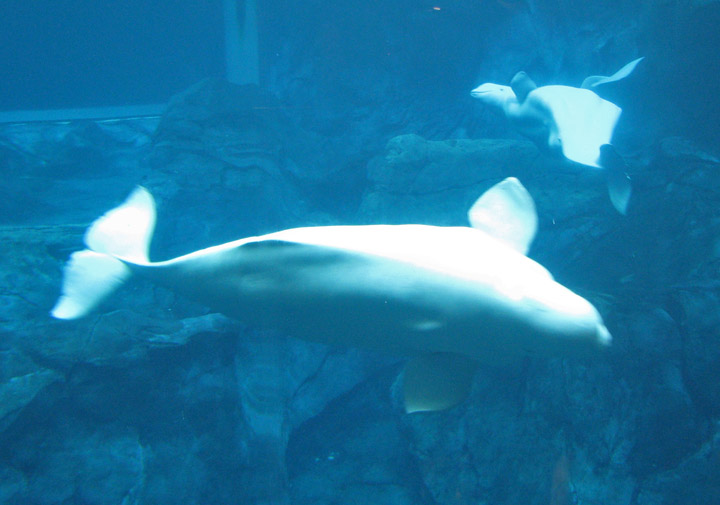 On June 9, 2006, the carcass of a young Beluga was found in the Tanana River near Fairbanks in central Alaska, nearly 1,700 kilometres (1,100 miles) from its nearest natural ocean habitat. As Beluga sometimes follow migrating fish, Alaska state biologist Tom Seaton speculated that it had followed migrating salmon up the river at some point in the prior fall.

The Beluga is a highly sociable creature. Groups of males may number in the hundreds, but mothers with calves generally mix in slightly smaller groups. When pods do aggregate in estuaries, they may number in the thousands. This can represent a significant proportion of the entire beluga population and is the time when they are most vulnerable to hunting. 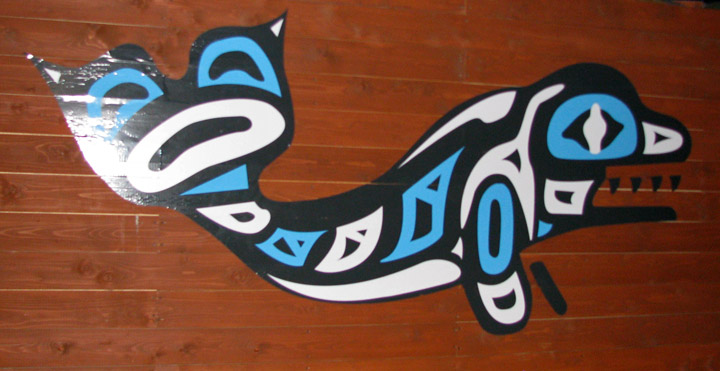 as honored by the Northwest Native Americans

Beluga pods tend to be unstable, meaning that Belugas tend to move from pod to pod. Pod membership is rarely permanent. Radio-tracking has shown Belugas can start out in a pod and within a few days be hundreds of miles away from that pod. The closest social relationship between Belugas is the mother-calf relationship. Nursing times of 2 years have been observed and lactational anestrus may not occur. Calves often return to the same estuary as their mother in the summer, meeting with their mother sometimes even after becoming fully mature.

Beluga are also known for being rather playful, as well as spitting at humans or other whales. It is not unusual for an aquarium handler to be sprayed down by one of his charges whilst tending a Beluga tank. Some researchers believe that this skill may be utilized to blow away sand from crustaceans at the sea bottom. Unlike most whales, it is capable of swimming backwards.