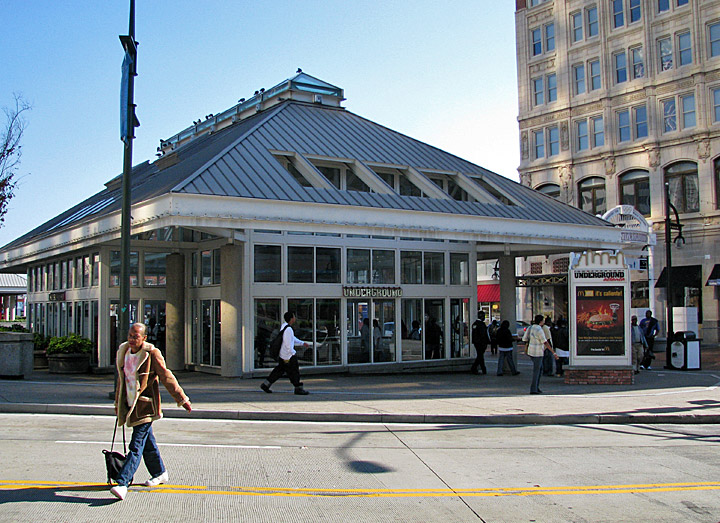 Underground Atlanta is a shopping and entertainment district in the Five Points neighborhood of downtown Atlanta, Georgia, United States, near the intersection of the MARTA rail lines. First opened in 1969, it takes advantage of the viaducts built over the city's many railroad tracks to accommodate automobile traffic. Each level has two main halls, still called Upper and Lower Alabama and Pryor 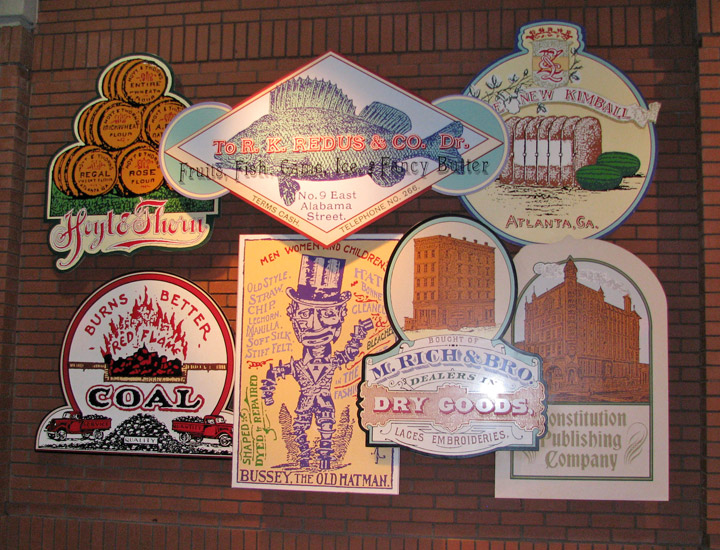 The buildings were built during Atlanta's post-Civil War boom, between 1866 and 1871, when the city's population doubled from 11,000 to 22,000 residents. In 1869, the Georgia Railroad Freight Depot was constructed to replace the one destroyed by Sherman's troops in 1864. The depot, which stands at the entrance of Underground Atlanta, remains the oldest extant building in downtown Atlanta. Besides the train station, the bustling district included hotels, banks, law offices and saloons. An electric streetcar was installed in 1889 to points South and by 1900, the depot was serving 100 trains per day with direct service between Atlanta and New York, Cincinnati, Chattanooga, Knoxville, Augusta, Macon and Columbus. 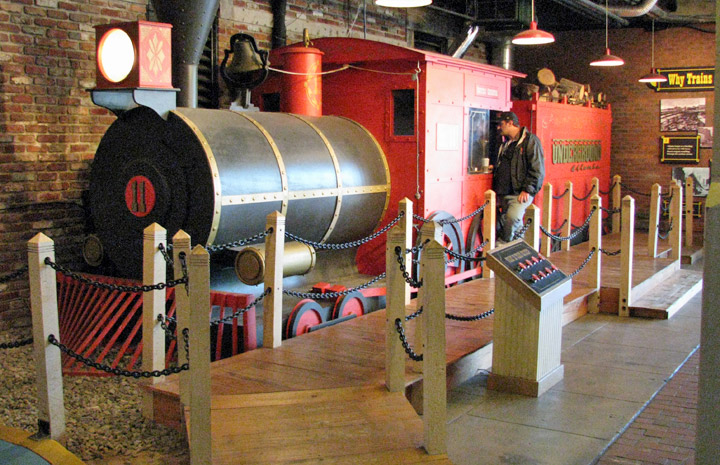 By 1910, several iron bridges had been built to cross the railroad tracks at Union Street. At the suggestion of Atlanta architect Haralson Bleckley, the bridges were rebuilt in concrete and connected by a linear mall between them. Eventually, Bleckley envisioned public plazas between the bridges, but only one, Plaza Park [later Peachtree Fountains Plaza], was ever built. 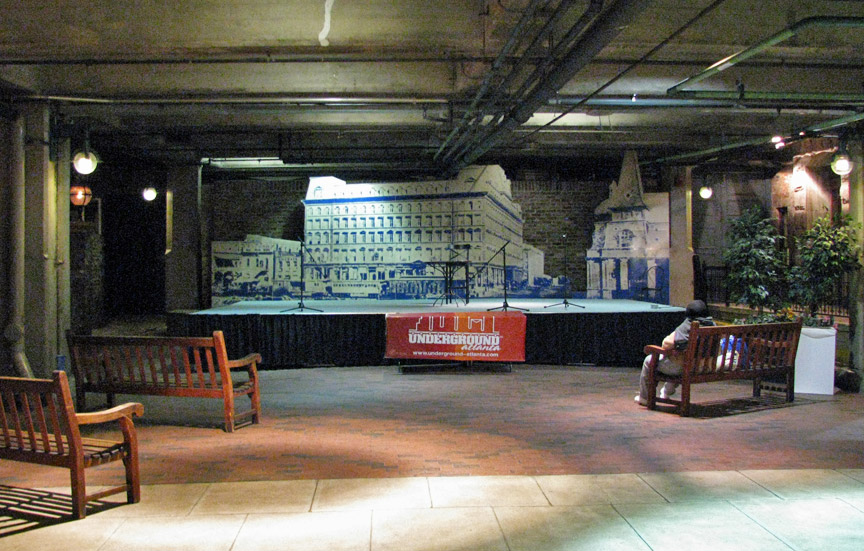 As the construction took place in the 1920s, merchants began to move their operations to the second floor of their buildings, and turned the original ground floors storefronts into basements for storage and service. Some of the basements became natural sites of speakeasys and juke joints, with music and illegal drinking a common occurrence. 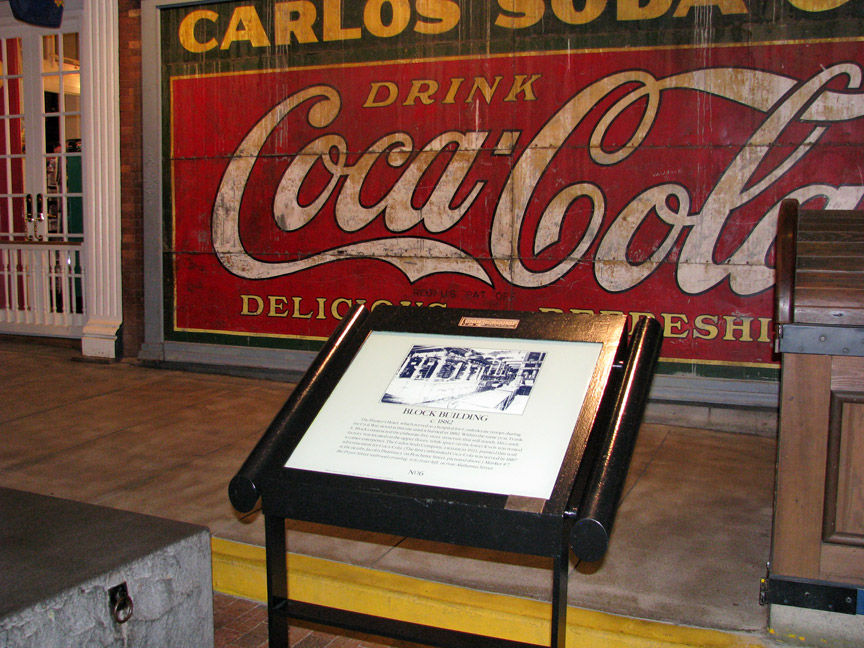 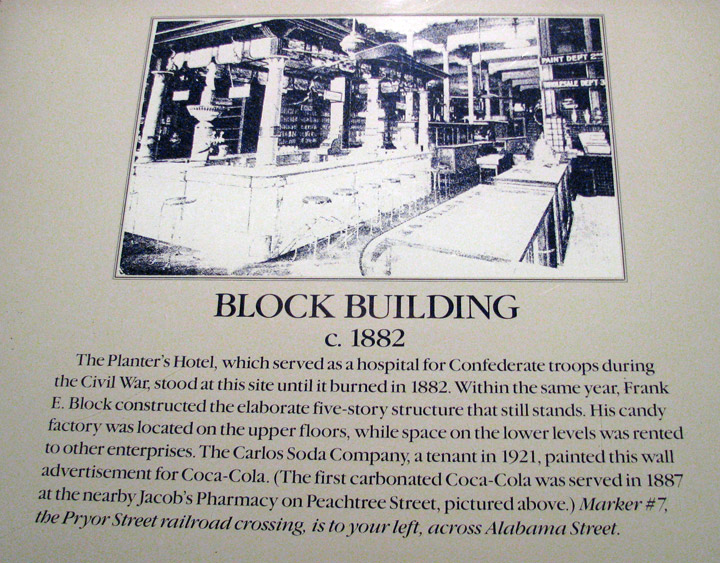 One of the first mentions of the area is in the opening lines of Bessie Smith's "Atlanta Blues" which documents its importance as an entertainment district: 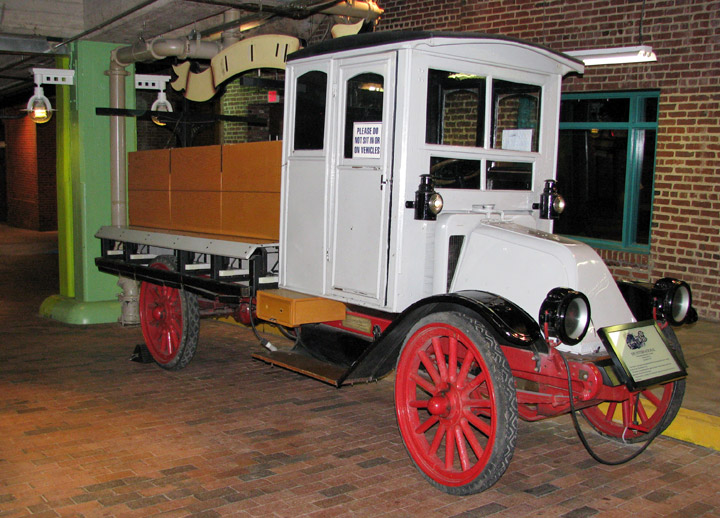 By the end of the 1920s, the street level had been raised up by one-and-a-half stories and a five-block area was completely covered up. For the next forty years, as Atlanta continued to grow, the 12 acre area was effectively abandoned and forgotten. 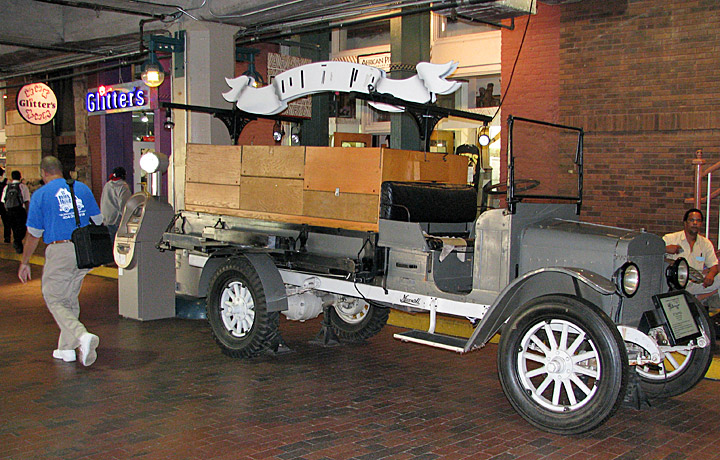 In 1968 the original storefronts were rediscovered and the district was declared a historic site. Many architectural features from a century earlier had survived intact including decorative brickwork, granite archways, ornate marble, cast-iron pilasters, hand-carved wooden posts and gas streetlamps. 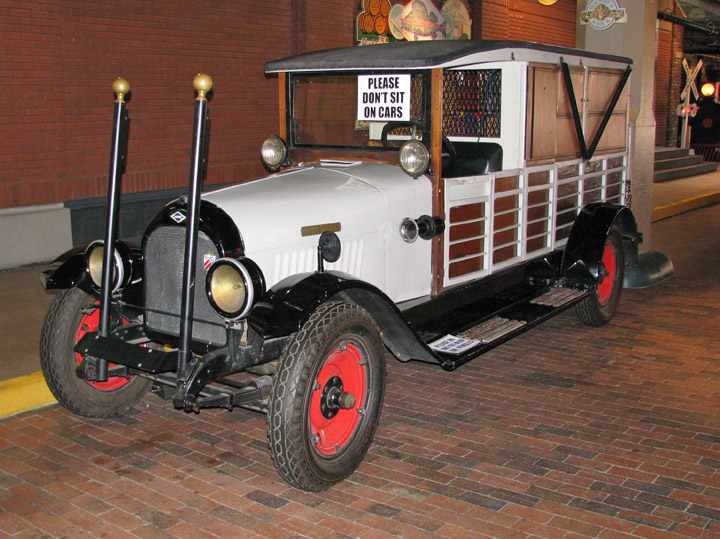 Plans were made to restore and reopen "the city beneath the city" as a retail and entertainment district. On April 8, 1969, "Underground Atlanta" officially opened with new restaurants, bars, nightclubs and music venues installed in the old individual storefronts. At the time, Fulton County was the only county that permitted mixed alcoholic beverages to be served, provided that men wore coats and ties in places that served them. As a result, Underground Atlanta quickly became the center of downtown Atlanta nightlife. 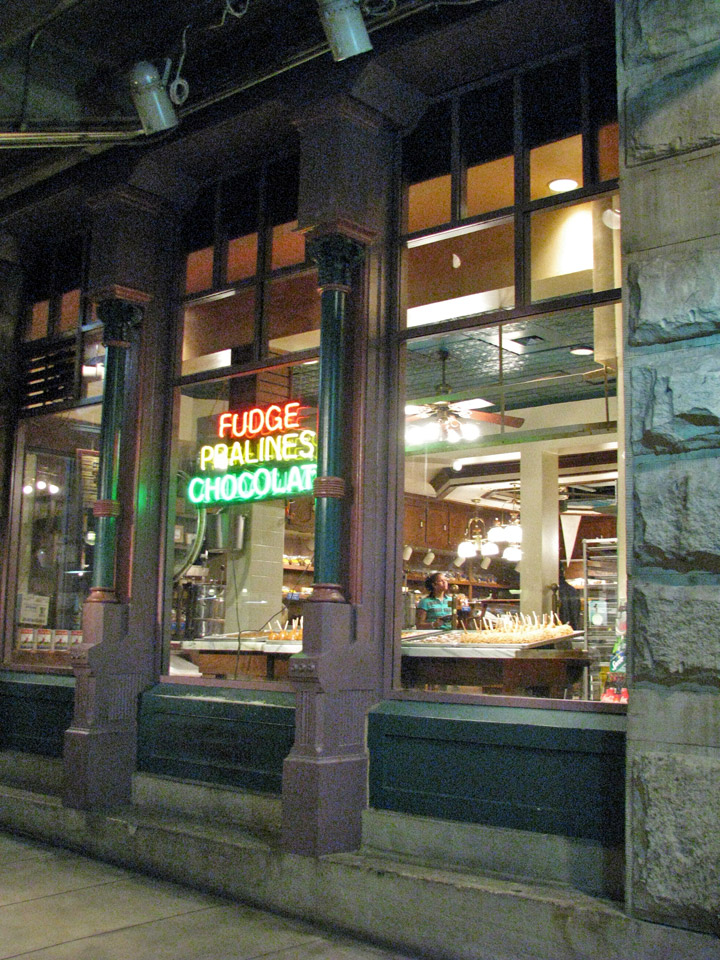 caramel apples for those with a sweet tooth

Among the more popular spots in Underground Atlanta were Dante's Down the Hatch, Scarlet O'Hara, The Blarney Stone, The Rustler's Den, The Bank Note and Mulenbrink's Saloon, where Atlanta's Piano Red, under the name Dr. Feelgood and the Interns, played from 1969 to 1979. Other attractions included a souvenir shop owned by governor Lester Maddox and a wax museum. With the old-style architecture lending considerable charm to the district, Underground Atlanta was compared to Bourbon Street in New Orleans. By 1972, its most profitable year, Underground had 3.5 million visitors and $17 million in sales. 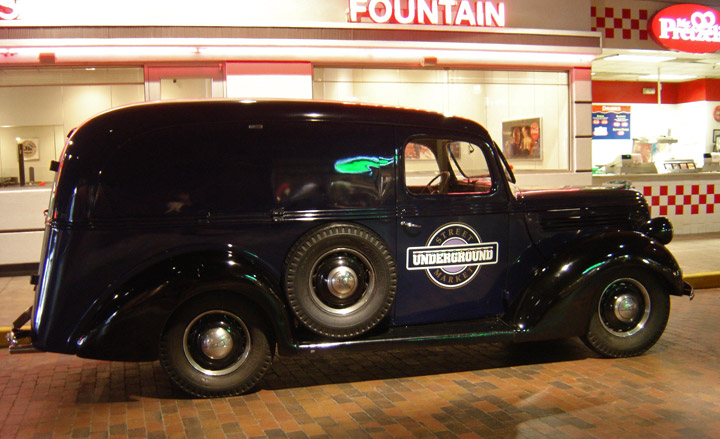 The heyday of Underground Atlanta lasted for only half a decade. When neighboring DeKalb County relaxed their restrictions on alcohol consumption in the early 1970s, new bars sprouted up in other parts of the city, generating competition. The dress code restrictions were dropped and fights began to break out. The construction of the MARTA East Line beginning in 1975 tore out several blocks of clubs and eliminated parking. Crime became uncontrollable and the area was considered dangerous. In 1980, Underground Atlanta was closed. A few businesses struggled to stay open but by 1982 they left and the area was once again abandoned. 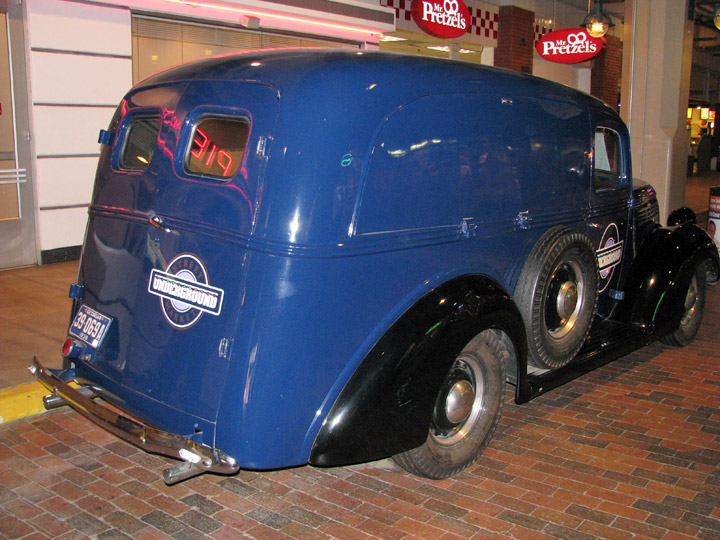 Underground sat mostly dormant for most of the 1980s. Vagrants occupied several of the historic buildings, some of which were destroyed by fires. In 1982, newly-elected Mayor Andrew Young vowed to reopen Underground as part of his plan to reinvent downtown Atlanta. 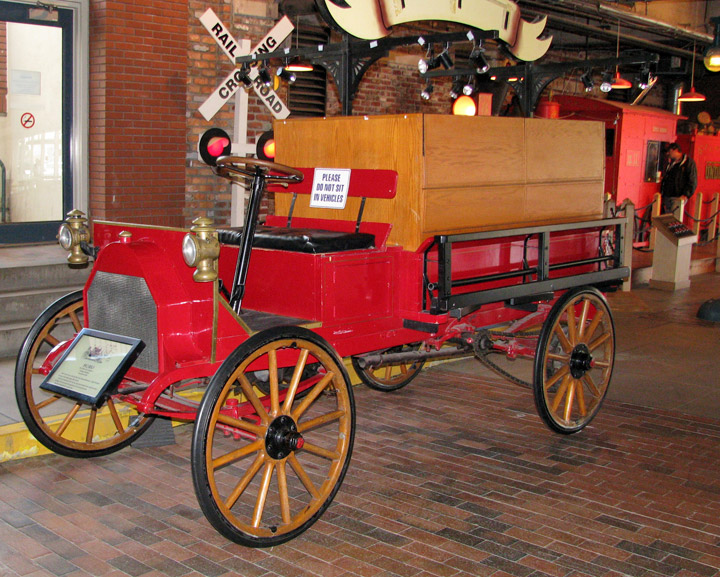 During this time, some of the clubs that were destroyed by the MARTA construction eventually won a claim for damages from federal mass transit authorities and used the money to help revitalize the area a second time. An expensive $142 million renovation conducted by The Rouse Company began in 1987. This included $85 million in city bonds. 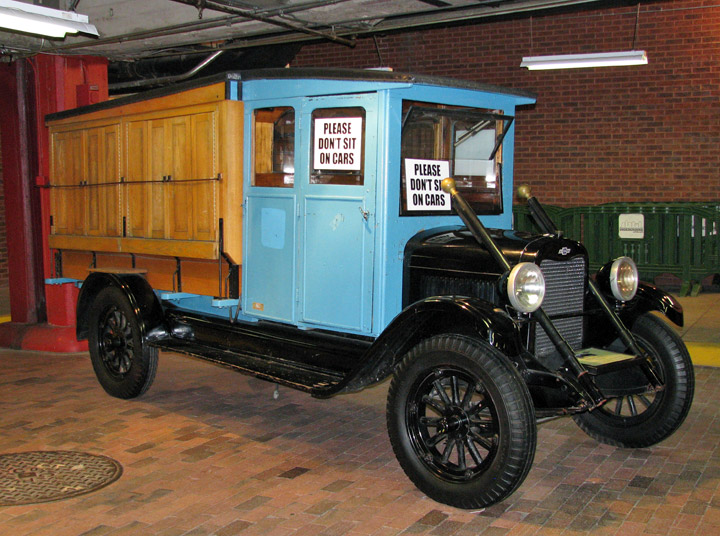 On June 15, 1989, Underground Atlanta reopened a second time as more of a modern shopping mall than an entertainment district. Its 140 tenants included the retail outlets Sam Goody and Olivia Newton-John's Koala Blue as well as a reopened Dante's Down the Hatch in the Kenny's Alley area. Although the historic buildings and architecture remained a major draw, some critics felt that the now-sanitized district has lost its original charm and lively atmosphere. 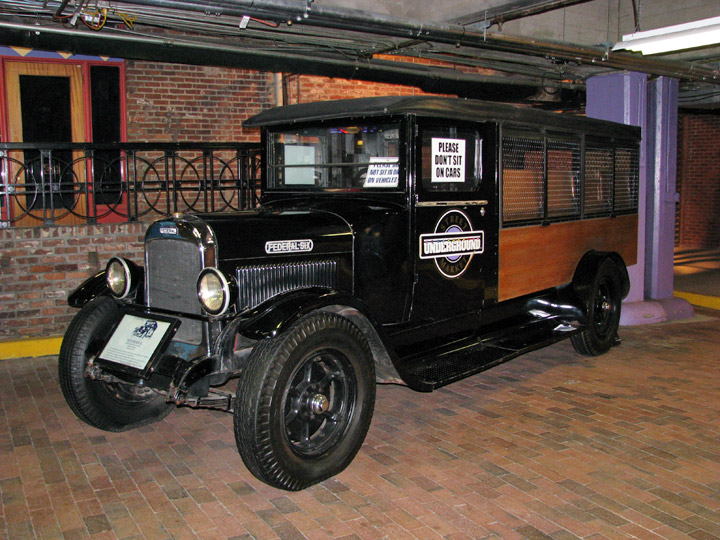 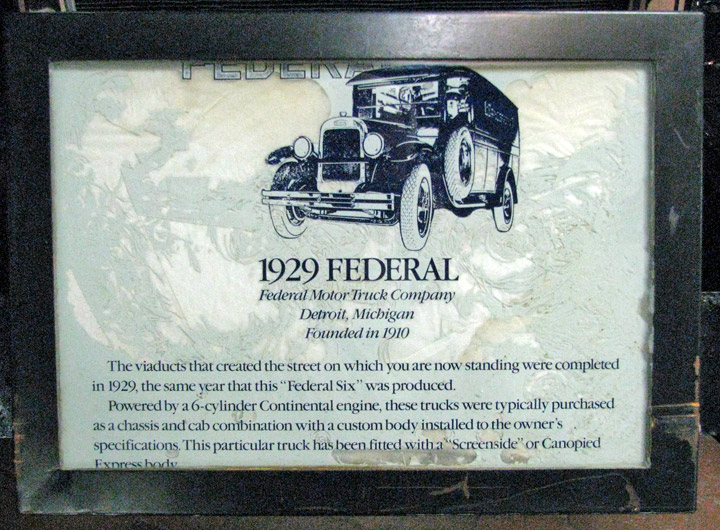 In August 1990, The World of Coca-Cola, a museum chronicling the history of The Coca-Cola Company and its products opened adjacent to Underground Atlanta, providing a further tourist boom into the area. 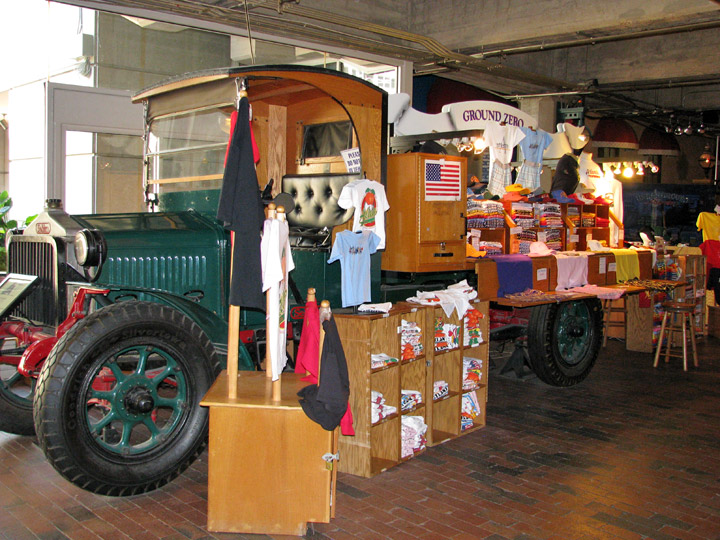 selling from the truck

But on April 30, 1992, in the wake of the Rodney King trial verdict, the area was severely damaged by rioters who smashed the windows of stores and restaurants. The following month saw a 40% decline in sales. A new marketing campaign which stated "The Fun in Town is Underground" was designed to help its public image and although the area gained significant attendance during the 1996 Olympics, but still ended the year $6.5 million in the red. 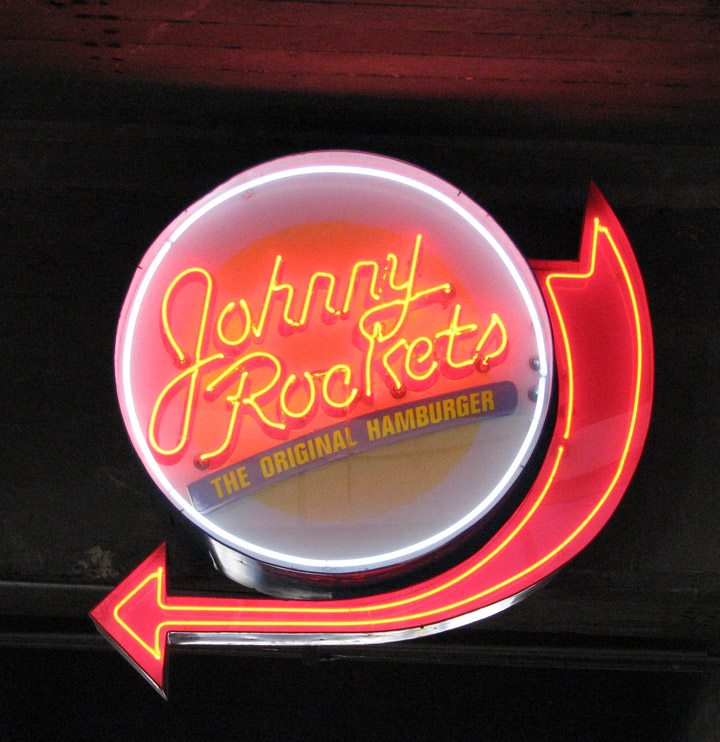 Underground Atlanta is once again home to retail stores, restaurants and several nightclubs and bars in Kenny's Alley. However, it has struggled to attract consistent and diverse patronage. In 1999, the city hired O'Leary Partners to manage the district. 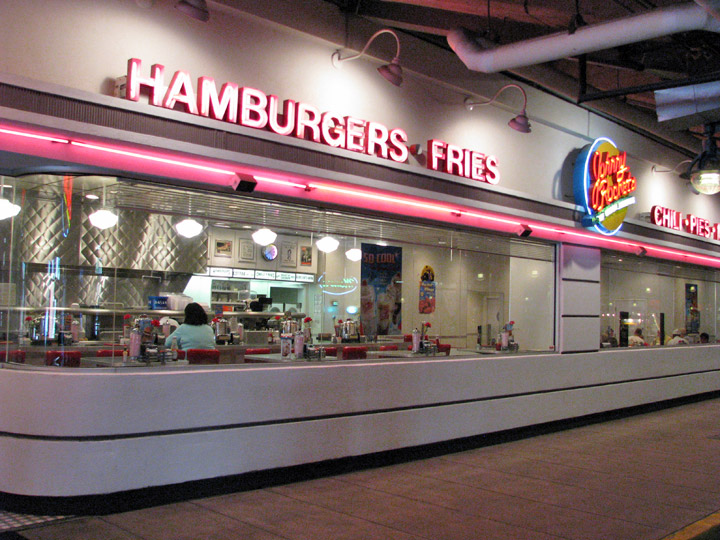 In an effort to keep Underground Atlanta from closing a second time, the city passed an 2004 ordinance allowing bars in the complex to have a 4:00AM closing time - 90 minutes later than the rest of the city. Patrons are also permitted to take alcoholic drinks from bar to bar. By 2005 annual attendance in Underground averaged around 6 million people. 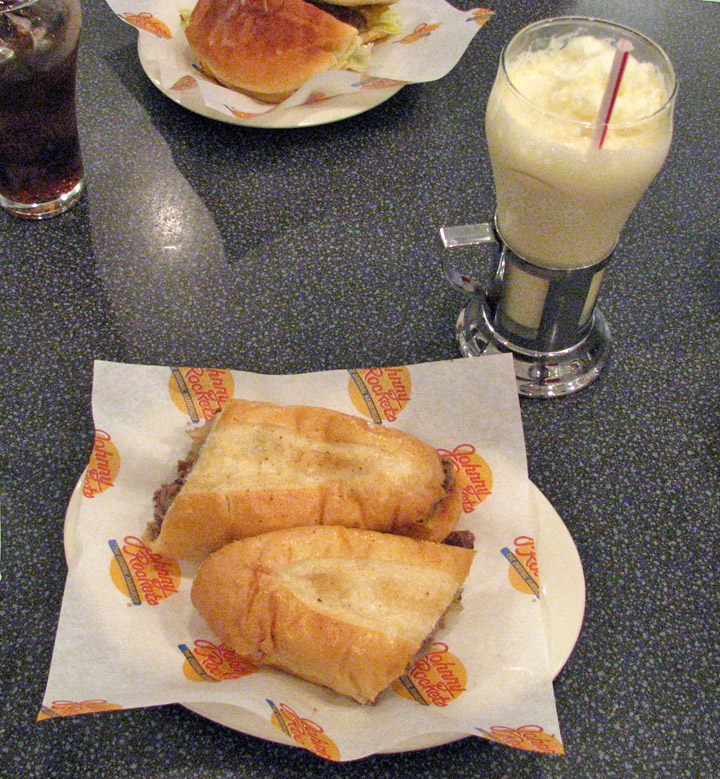 vanilla malt and a cheese steak

Today Underground Atlanta is primarily a destination for tourists and some venues have sought to attract an African-American clientele. 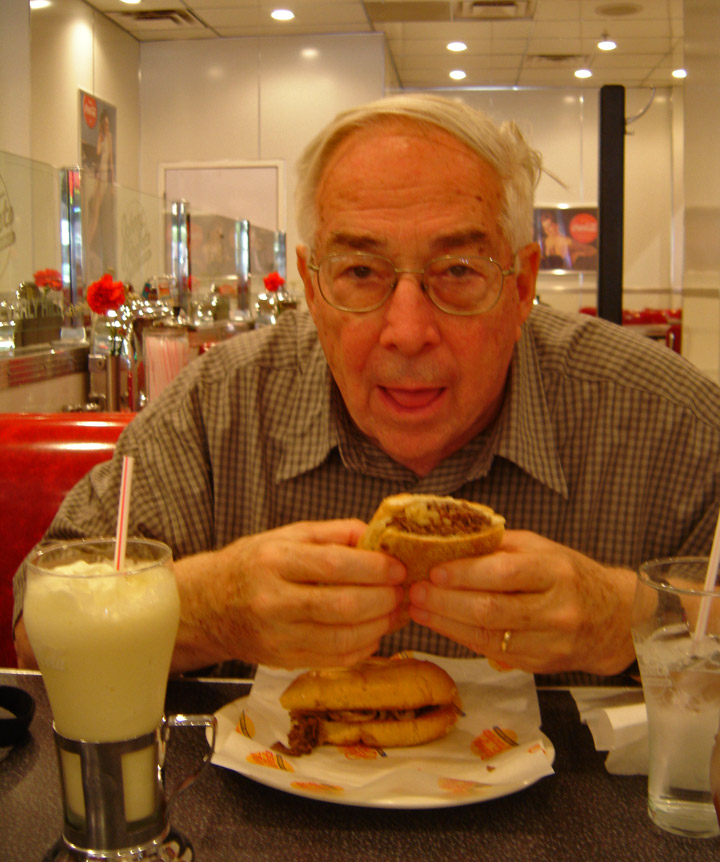 "The Traveler" enjoying the traditional menu

In addition, after nearly seventeen years in operation, The World of Coca-Cola closed its Underground Atlanta location on April 7, 2007 and moved to a larger facility near Centennial Olympic Park. 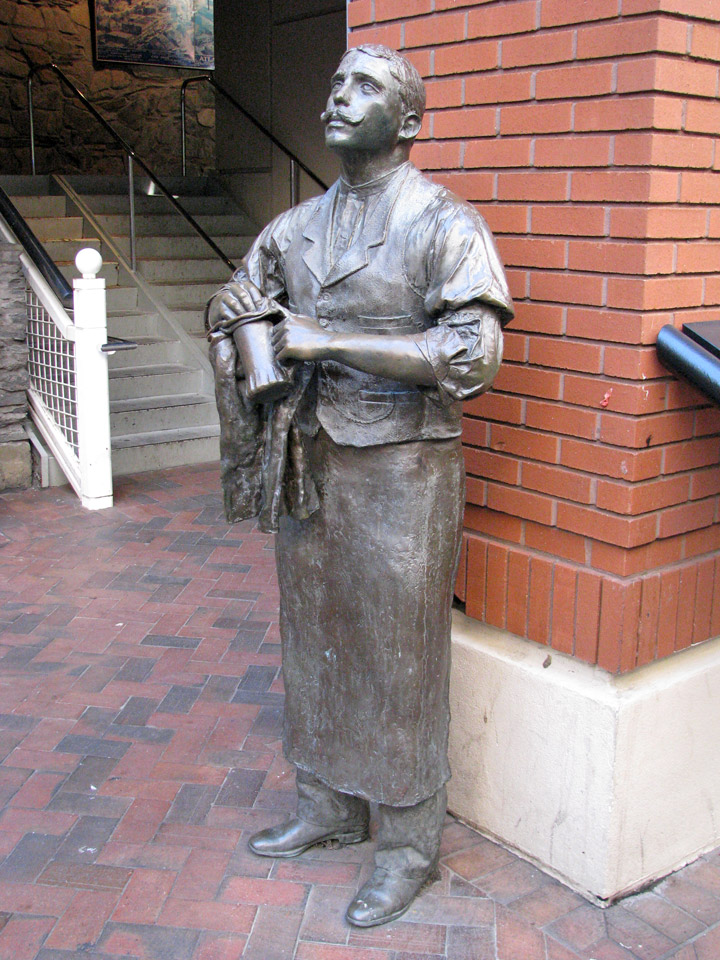 Every New Year's Eve, there is a grand Peach Drop celebration that happens in Underground Atlanta, in which a giant foam peach drops from a small tower, followed by fireworks.