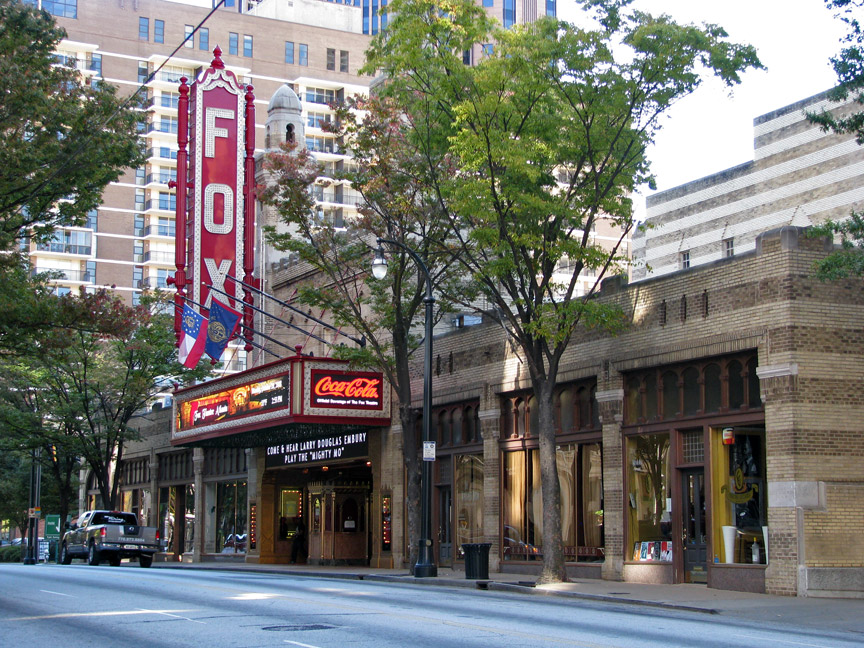 The Fox Theatre (often marketed as the Fabulous Fox) in Atlanta, Georgia is one of the grand movie palaces built in the United States in the 1920s. It is located at the corner of Peachtree Street and Ponce de Leon Avenue in Midtown Atlanta. The theatre's unique origin and Moorish design sets it apart from others of the era including those bearing the Fox Theatre name in other cities. It currently hosts a variety of cultural and artistic events including the Atlanta Ballet, a summer film series, and performances by national touring companies of Broadway shows. 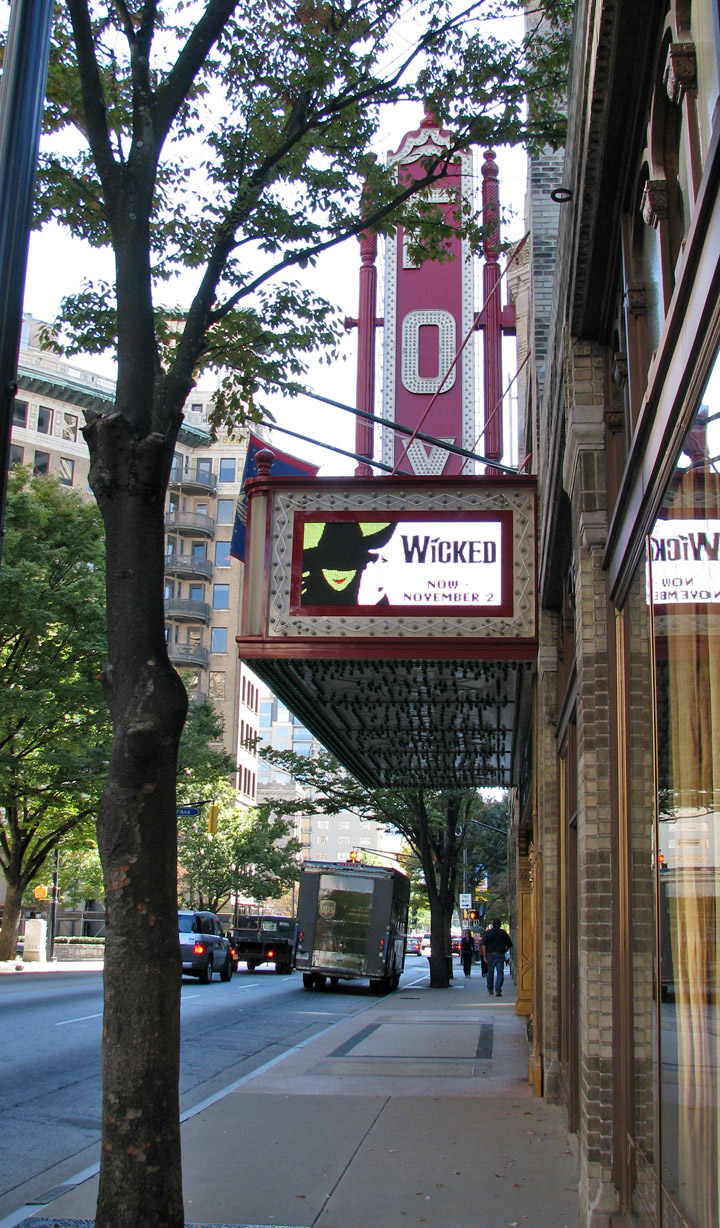 When the Fox Theatre first opened, the local newspaper described it as having, “a picturesque and almost disturbing grandeur beyond imagination”. It remains a showplace that impresses theatregoers to this day. The principal architect of the project was Olivier Vinour of the firm Marye, Alger and Vinour. 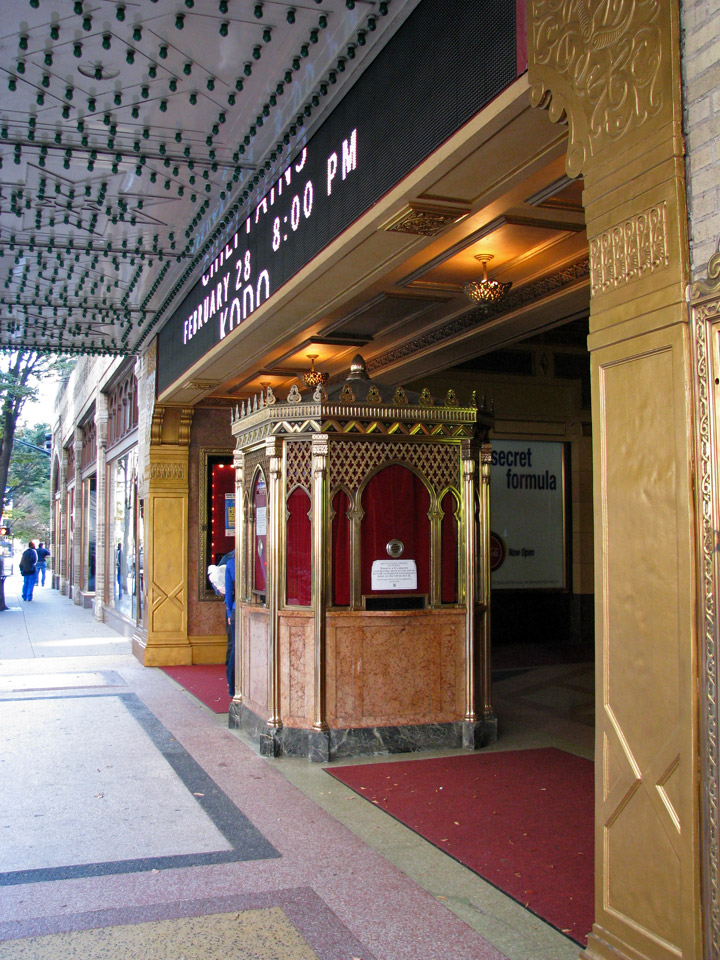 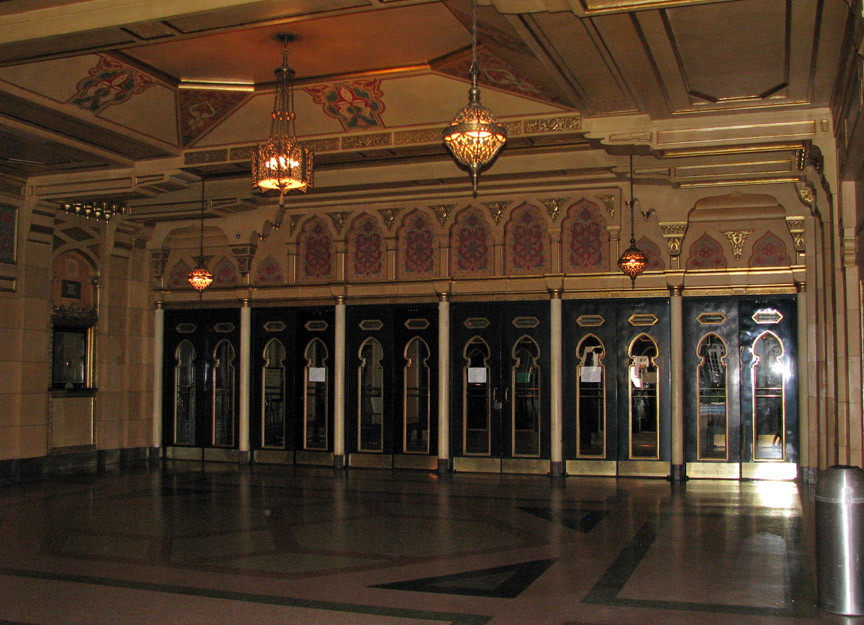 The 4678-seat auditorium, which was designed for movies and live performances, replicates an Arabian courtyard complete with a night sky of 96 stars (a third of which flicker) and a projection of clouds that slowly drift across the ‘sky’. The Egyptian Ballroom is designed after a temple for Ramses II at Karnak while the mezzanine Ladies Lounge features a replica of the throne chair of King Tut and makeup tables that feature tiny Sphinxes. The Islamic sections feature a number of ablution fountains, which are currently kept dry. 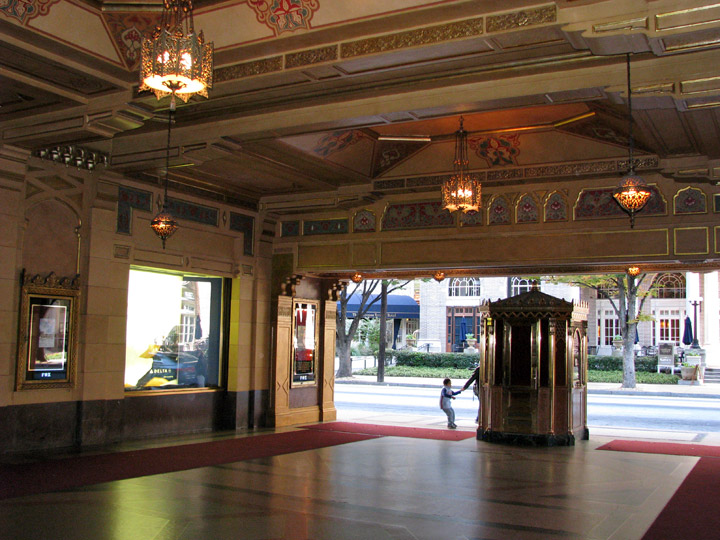 Throughout the Fox there is extensive use of trompe l'oeil; ‘wooden’ beams are actually plaster, paint that appears gold leaf is not, areas are painted and lit to appear to receive outside lighting, ornate fireplaces were never designed to have working chimneys, and what appears to be a giant Bedouin canopy in the auditorium is plaster and steel rods designed to help funnel sound to the farthest balcony. The Atlanta Preservation Center sponsors regular tours of the Fox Theatre’s interior. 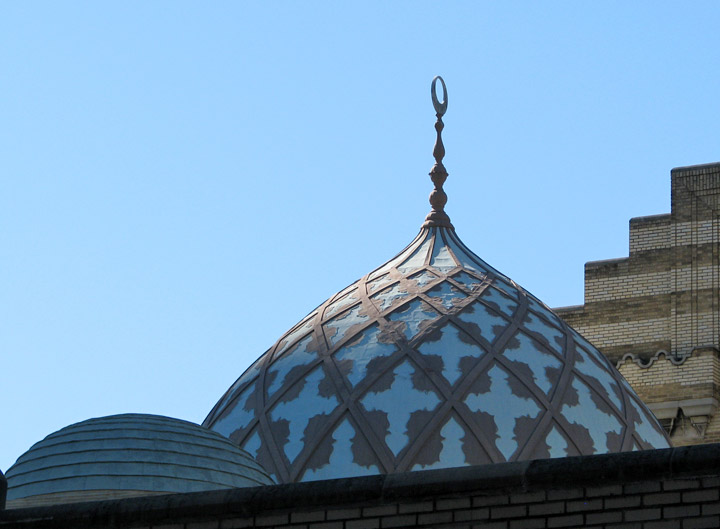 Originally intended as the Yaarab Temple Shrine Mosque, a headquarters for a 5000-member Shriners organization, the $2.75 million project was completed only with funding and a twenty-one year lease by movie mogul William Fox, who was building theatres around the country at the time. The theatre opened on December 25, 1929, just two months after the stock market crash. After 125 weeks of talking pictures and stage entertainment, the Fox Theatre declared bankruptcy. It floundered financially during the 1930s and both William Fox and the Shriners lost their economic interests in the building. 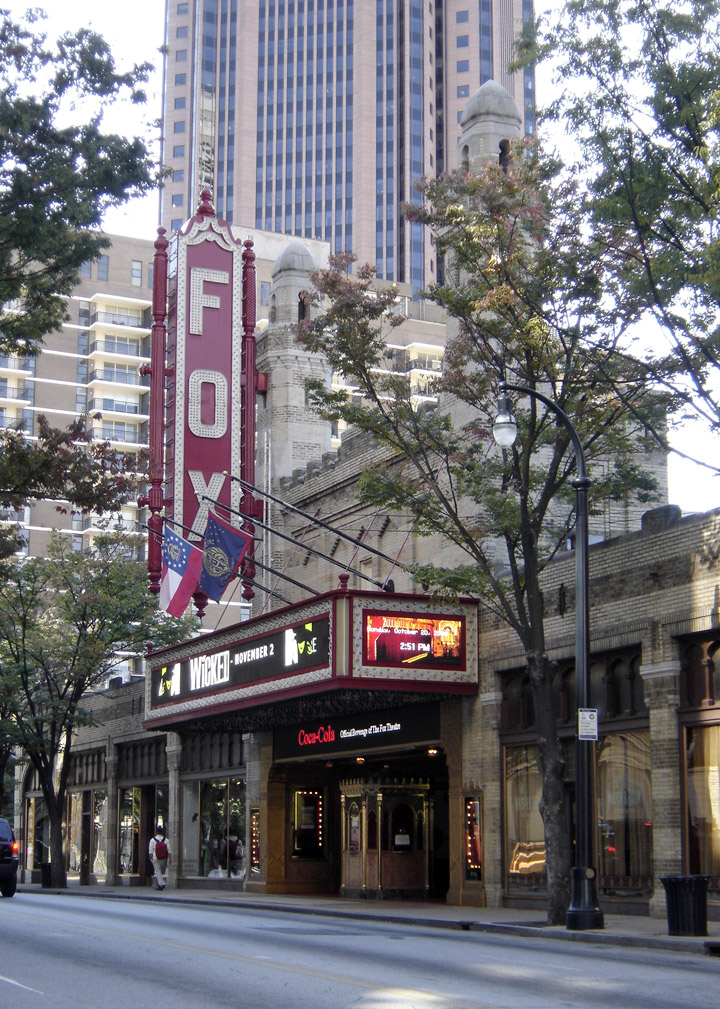 In 1939, the movie perhaps most associated with Atlanta and the South, Gone with the Wind, premiered at the (now-demolished) Loew's Grand Theatre rather than the Fox. The parade down Peachtree Street for the movie’s premier coincidentally started just outside of the Fox because the movie’s cast was staying across the street at the Georgian Terrace Hotel. 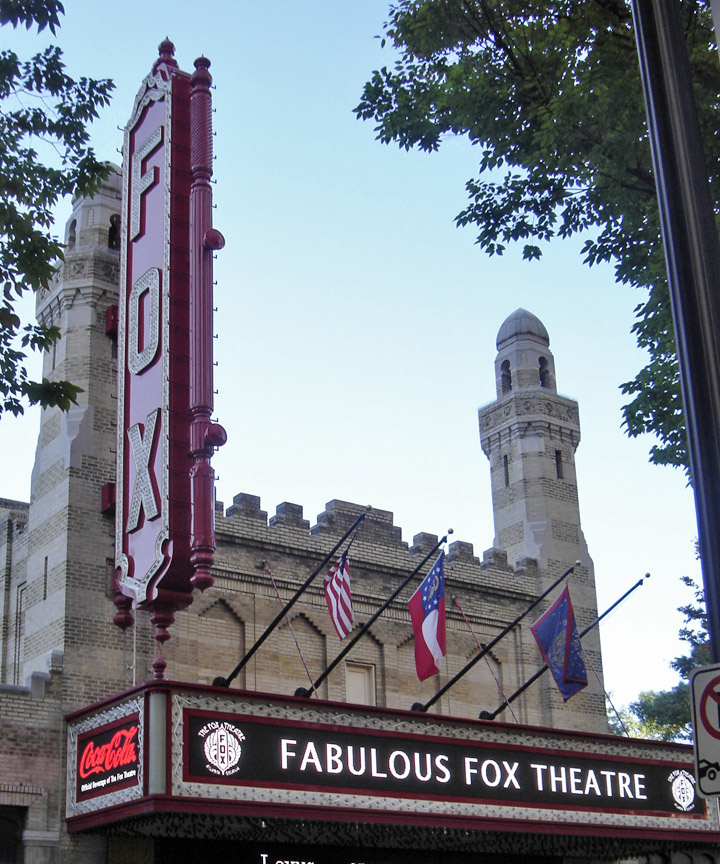 The Fox did host the premiere of Walt Disney's Song of the South. Disney introduced the picture, then returned to his room at the Georgian Terrace. According to Atlanta Journal-Constitution columnist Celestine Sibley's review of the premiere, Disney never watched his movies with an audience, because he would become upset if their reaction was not exactly as he had intended. 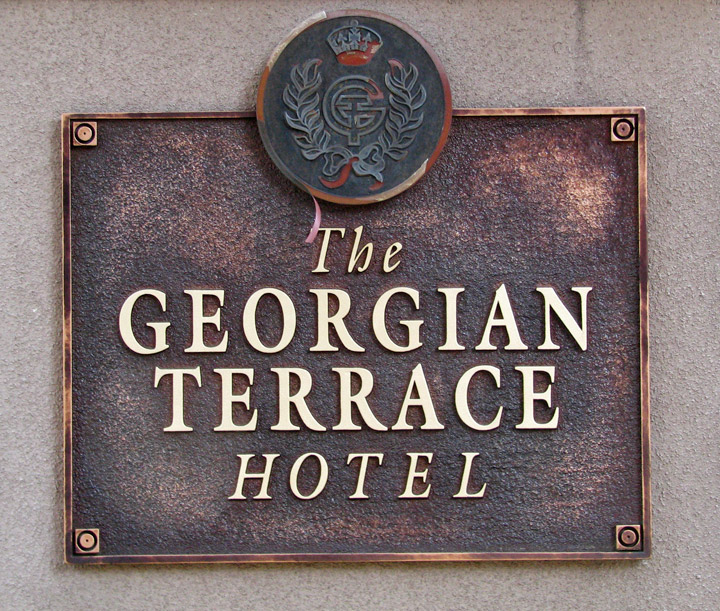 During the 1940s the Fox acquired strong management and became one of the finest movie theatres in Atlanta. It was also at this time that the Egyptian Ballroom became Atlanta’s most popular public dance halls and hosted all the important big bands and country and western swing bands of the era. It was notable at that time, for being the only theatre in Atlanta allowing both white and black patrons. However, there was a separate black box office, entrance, and seating; the segregation wall in the middle of the second dress seating still remains, and the "colored" box office window stands unused at the back entrance. 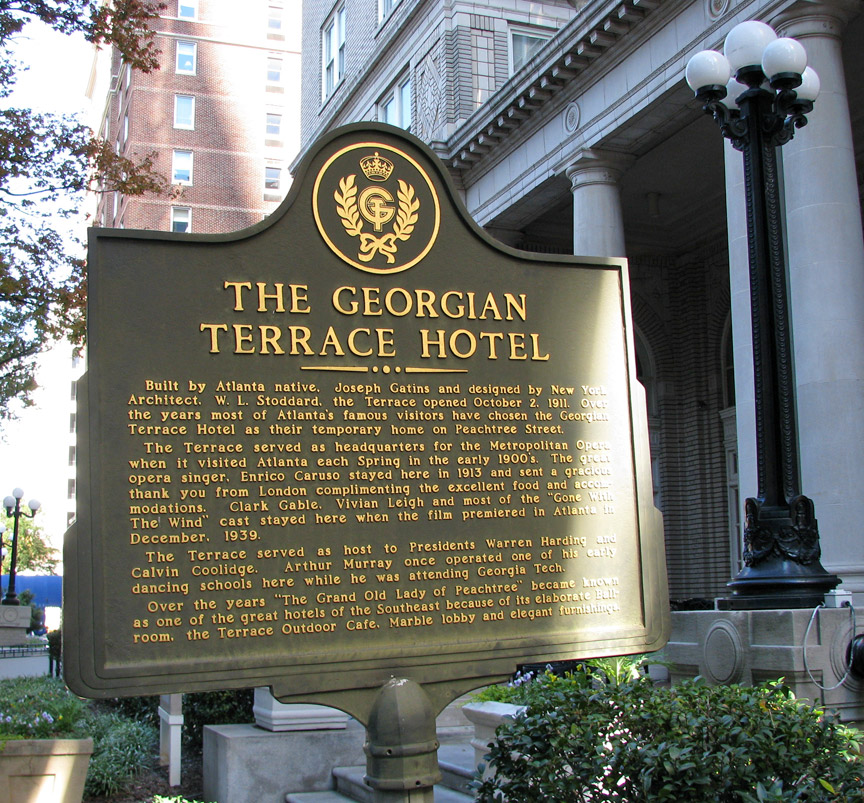 During the 1960s several elements collided to bring about the Fox’s decline; white flight, television, and changes in how films were distributed. By the 1970s the Fox could only show second-run movies to an ever dwindling audience.

In 1974, Southern Bell, the regional arm of AT&T, approached the owners of the theatre with an offer to buy and with the intent of tearing it down and building a new headquarters on the site. A group was formed to save the theatre and it was placed on the National Register of Historic Places in May 1974. The ensuing public outcry and massive campaign (including Liberace, Lynyrd Skynyrd and other celebrities) resulted in the city refusing to issue a demolition permit and ultimately, a complicated deal was brokered that prevented the Fox's demolition. The Southern Bell headquarters were built on land adjacent to the theatre. The U.S. Department of the Interior subsequently named the Fox a National Historic Landmark on May 26, 1976. 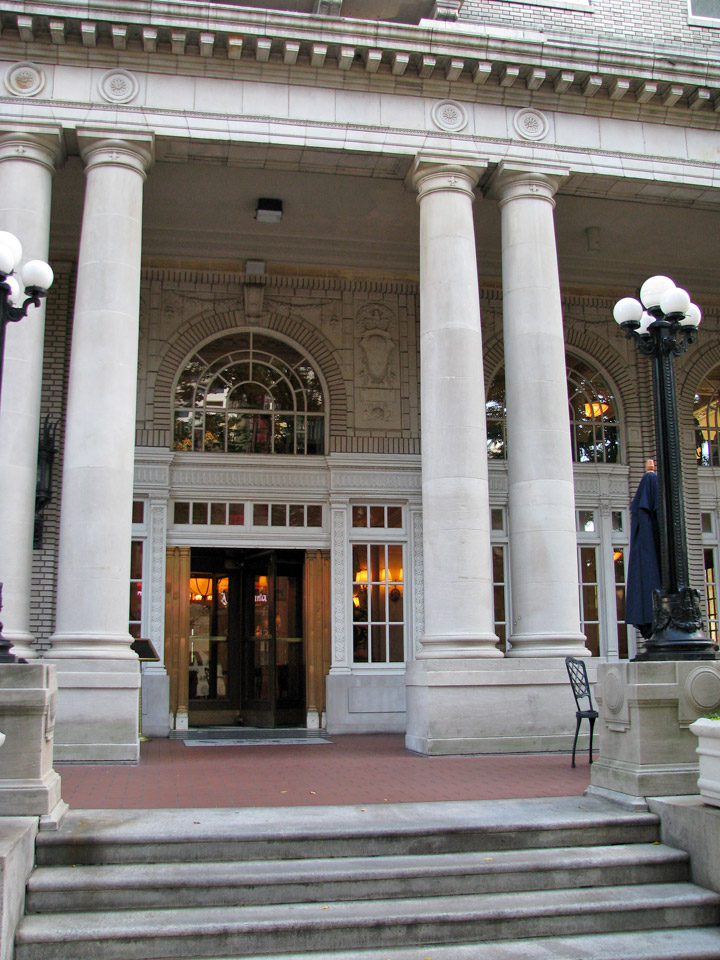 After the Fox was saved from the demolition, a lengthy and expensive restoration process began. Luckily much of the original décor had survived and new pieces were created with the help of old photographs. Today, the Fox appearance looks much like it did when it opened, with some additions that were in the original plans but scrapped in the 1920’s because of financial constraints, and other changes that had to be made to bring the building up to current safety codes.

The theatre, now run under the non-profit Atlanta Landmarks, Inc., currently hosts a multitude of cultural and artistic events including the Atlanta Ballet, a summer film series, and performances for various national touring companies of Broadway shows. Because of its origins as a movie house, the Fox has a relatively shallow stage by theatrical standards and is unable to accommodate some of the set pieces required by modern large scale shows such as The Lion King and Miss Saigon. 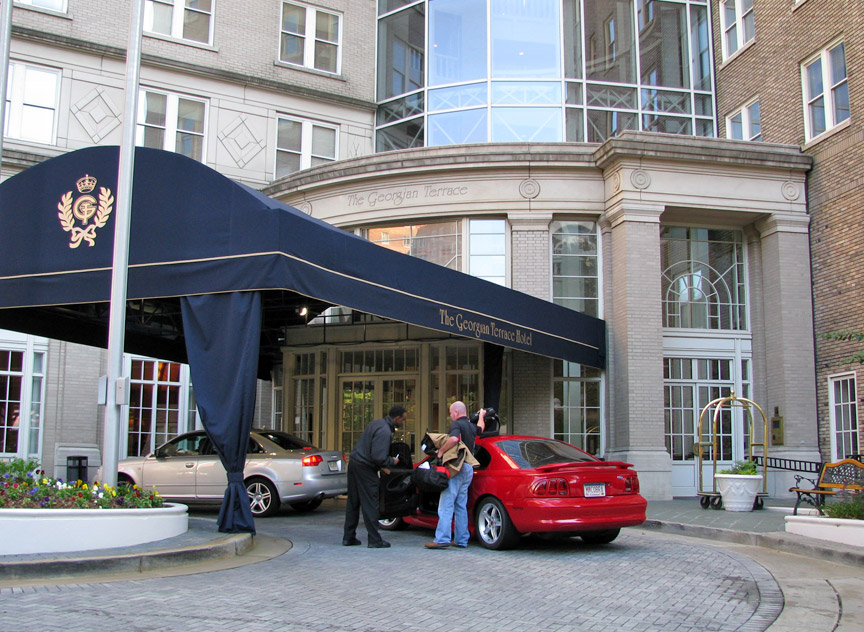 In June 2006, the theatre installed a new digital cinema video projection system for $130,000, which debuted with a showing of The Chronicles of Narnia: The Lion, the Witch and the Wardrobe on June 26, part of the Summer Film Festival. The sing-alongs that precede each feature are still shown by the Brenograph projector which was installed in 1929. 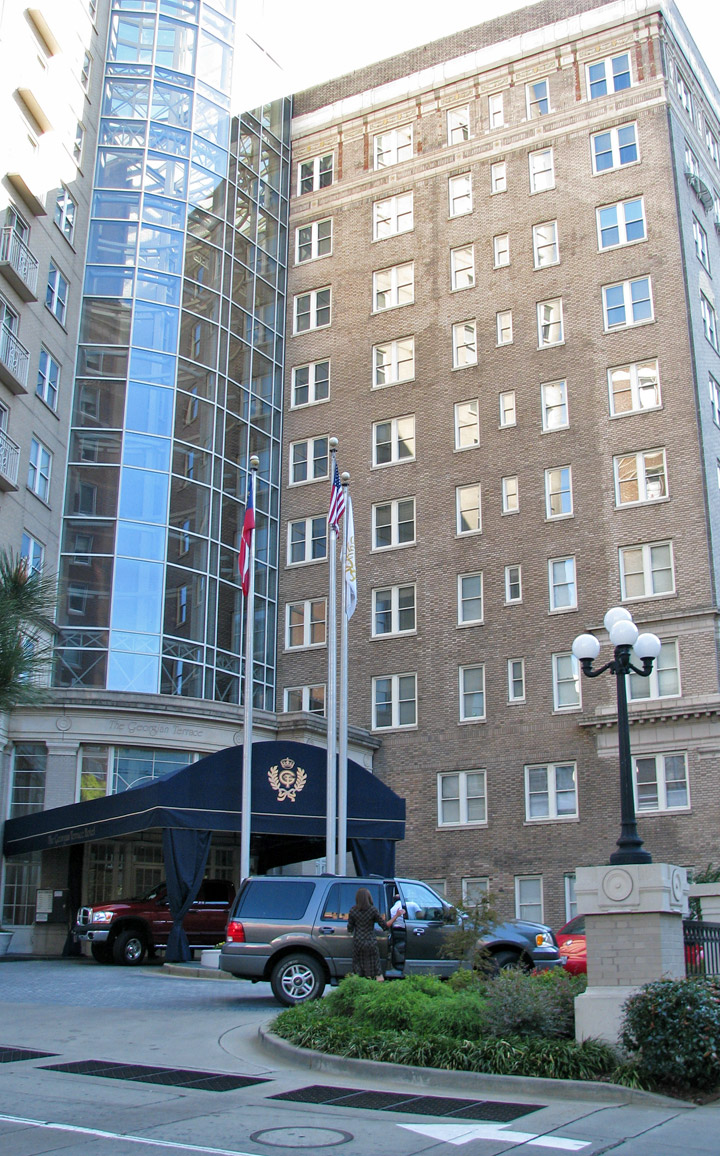 The Egyptian Ballroom and the Grand Salon are rented regularly for corporate and private functions including banquets, fundraisers, weddings, trade shows and conventions. They are also both popular spots for proms for many area high schools. Every year since Atlanta Landmarks took over management in 1975, the Fox has generated an operating surplus. An estimated 750,000 people visit the Fox every year. 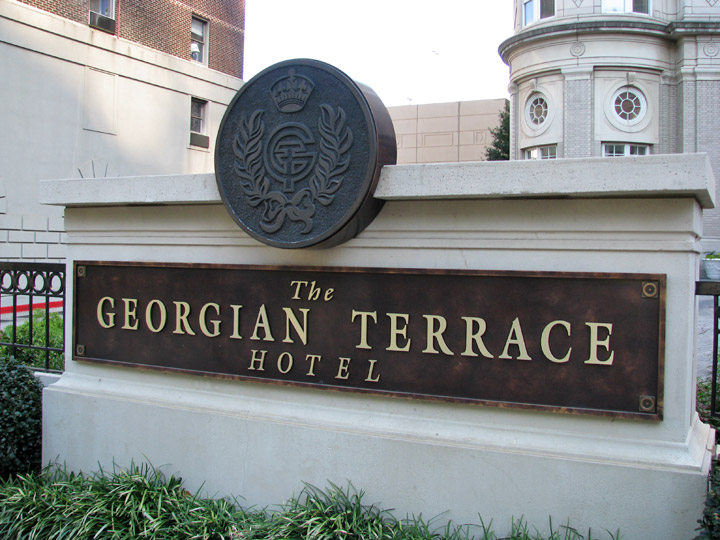 The Fox features a four manual (or keyboard) 42-rank pipe organ nicknamed the "Mighty Mo". It was custom built for the Fox by M. P. Möller, Inc. in 1929 in Hagerstown, Maryland. With 3,622 pipes, it is the second-largest theatre organ in the country, behind the Wurlitzer at Radio City Music Hall in New York and was the largest theatre instrument built by Möller. 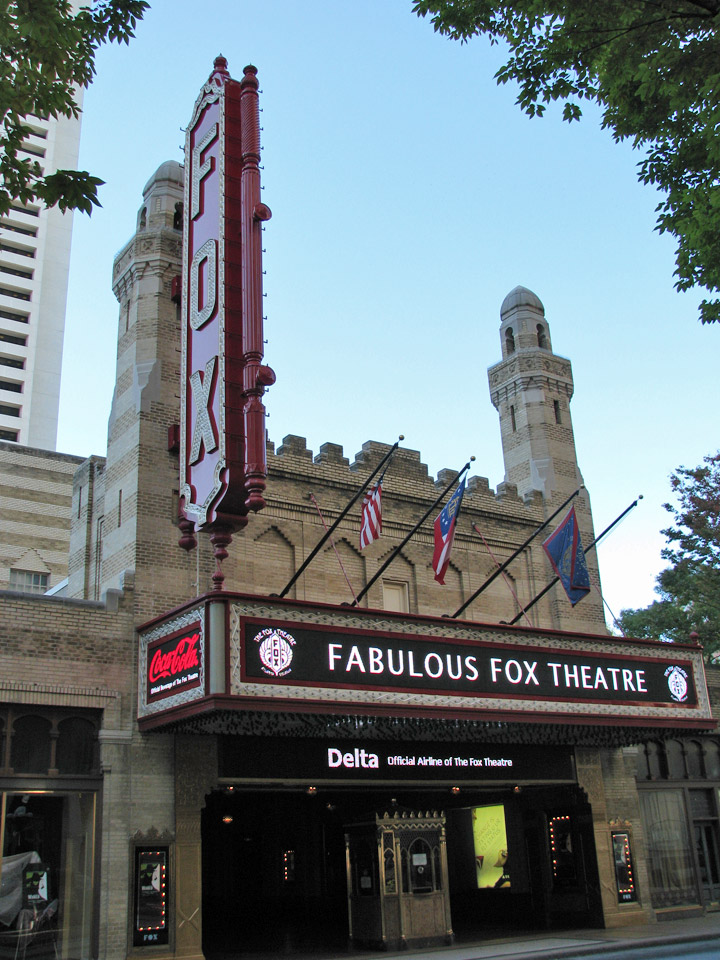 As a true theatre organ, as opposed to a church organ, Mighty Mo's pipes range in size from 32 feet (nearly 10 meters) tall to the size of a small ballpoint pen, and is designed to imitate the sounds of a full orchestra. Besides the pipes, it also contains a marimba, xylophone, glockenspiel, drums, sleigh bells, a gong, and even a six-foot (1.8m) grand piano (originally from the Kilgen organ in Chicago's Piccadilly Theatre); plus a large variety of silent movie sound effects (such as various car horns, thunder and rain effects, bird whistles, etc.). The organ is remarkable for a theatre organ because it also includes 12 ranks of pipes for a church organ, known as the "Ethereal" division. Thus the organ can be played as a church organ as well as a theatre organ. It is noteworthy that the Mighty Mo is among the shrinking list of instruments which remain installed in the theatre for which it was designed; many theatre organs which remain today have been preserved only through removal from their original homes. 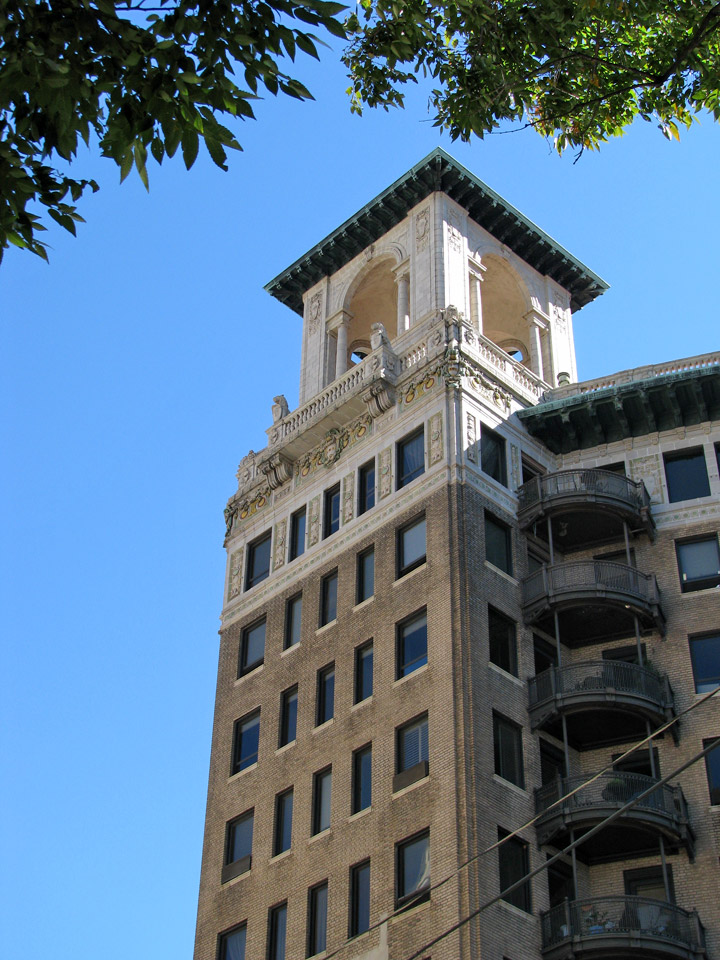 diagonally across the street from The Fox

In the summer of 2002, Larry Douglas Embury was invited to become Organist in Residence presiding over the Mighty Mo. In this capacity, he played sixty-one performances from June to August. That September, he hosted and was featured in "Fox at the Fox," a twenty-second anniversary memorial concert in honor of the late great organist, Virgil Fox. At that time, Larry was named permanent Organist in Residence of the Fox Theatre, a prestigious position that the Fox had been unable to satisfy for nearly twenty years.