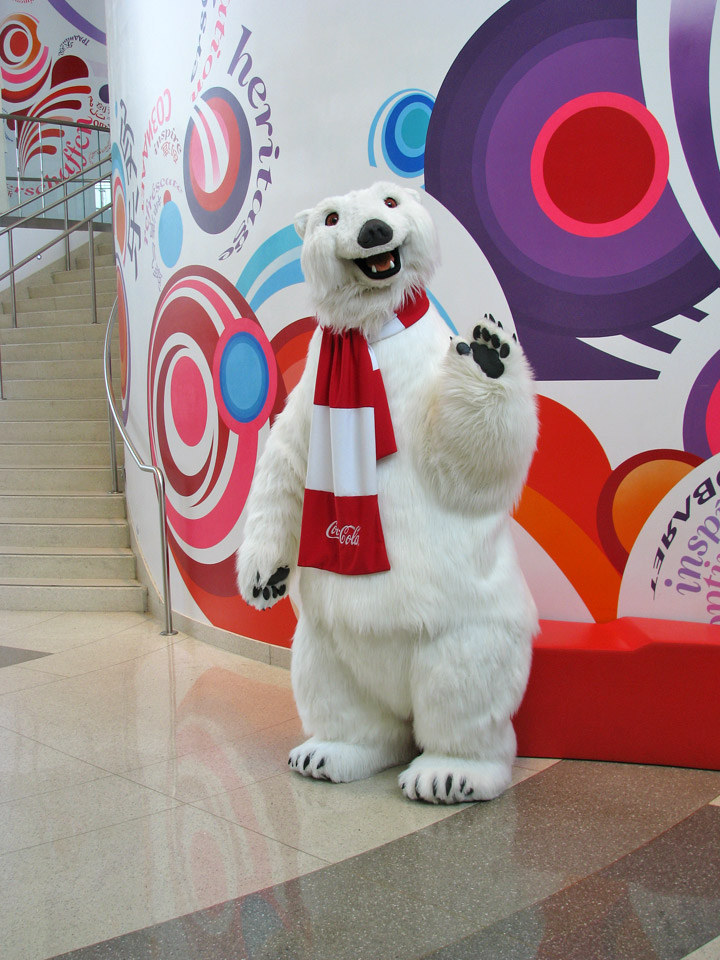 come to the World of Coca-Cola

The World of Coca-Cola is a permanent exhibition featuring the history of The Coca-Cola Company and its well-known advertising as well as a host of entertainment areas and attractions. It is located in Atlanta, Georgia at Pemberton Place (named in honor of John Pemberton, the inventor of Coca-Cola), a 20 acre complex located across Baker Street from Centennial Olympic Park that also includes the Georgia Aquarium. It opened to the public on May 24, 2007, replacing a 17-year-old smaller museum located a few miles away. 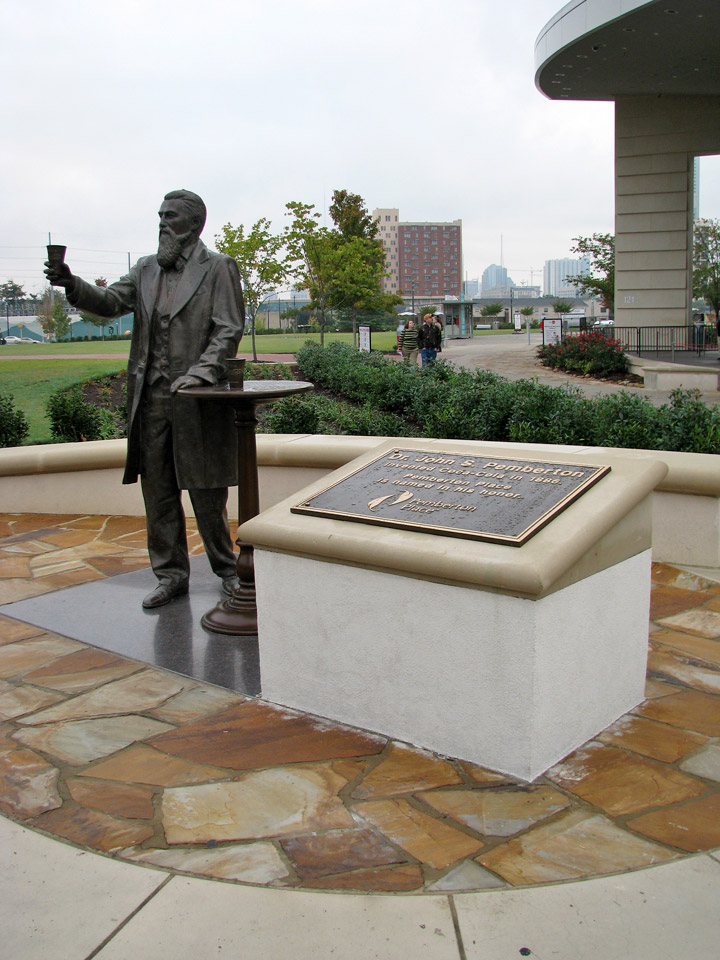 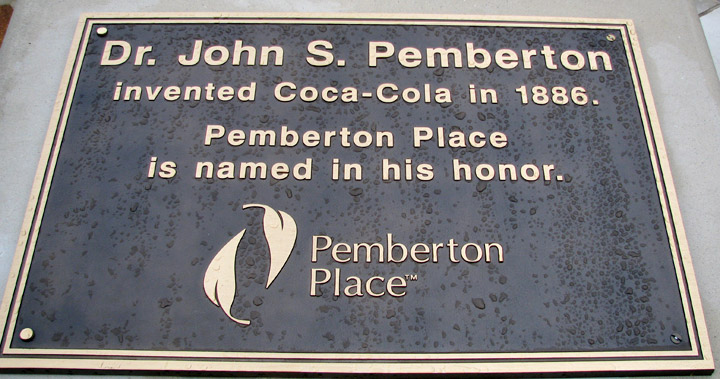 After going through a security checkpoint involving airport-style metal detectors, guests begin their visit in "The Lobby," which features large Coca-Cola bottles made from different materials from around the world. 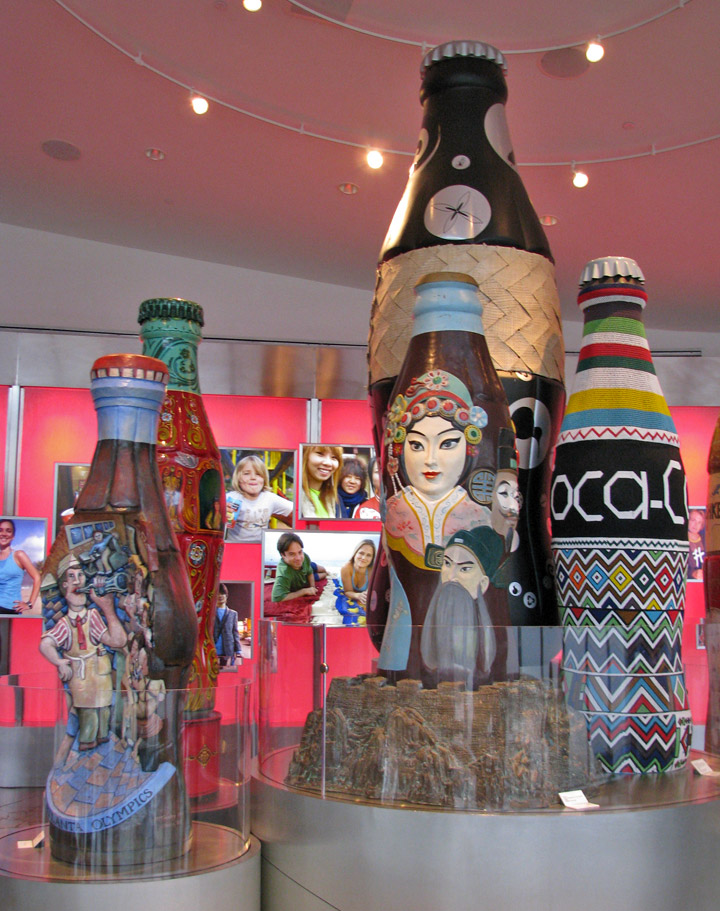 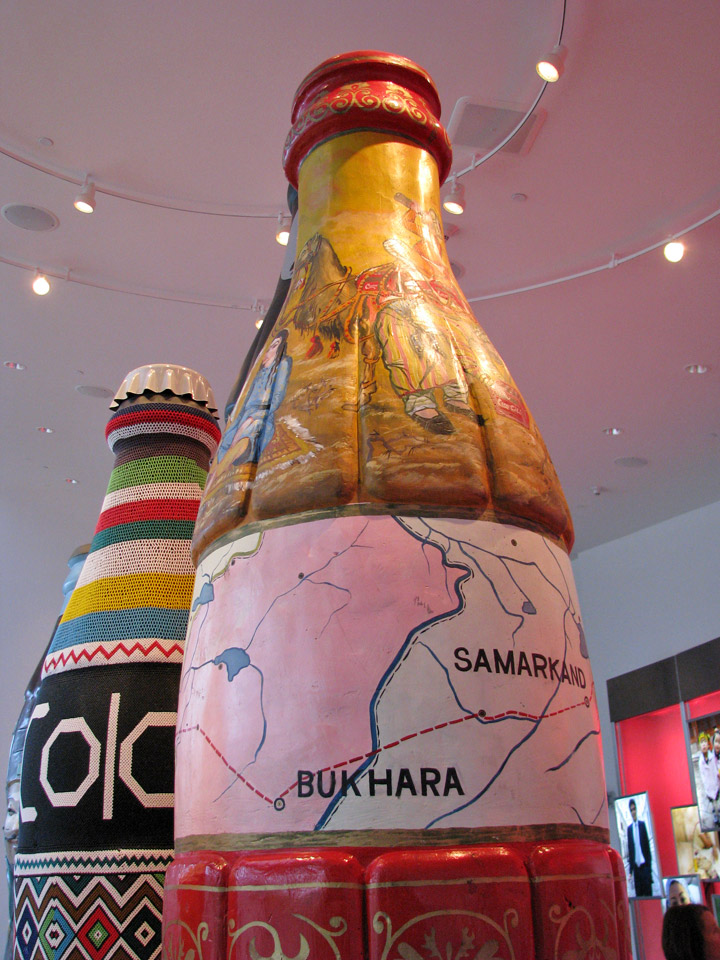 Guests are then funneled into the "Coca-Cola Loft," a collection of Coca-Cola advertising artifacts dating back as far as 1905, while they wait to enter the "Happiness Factory Theatre." 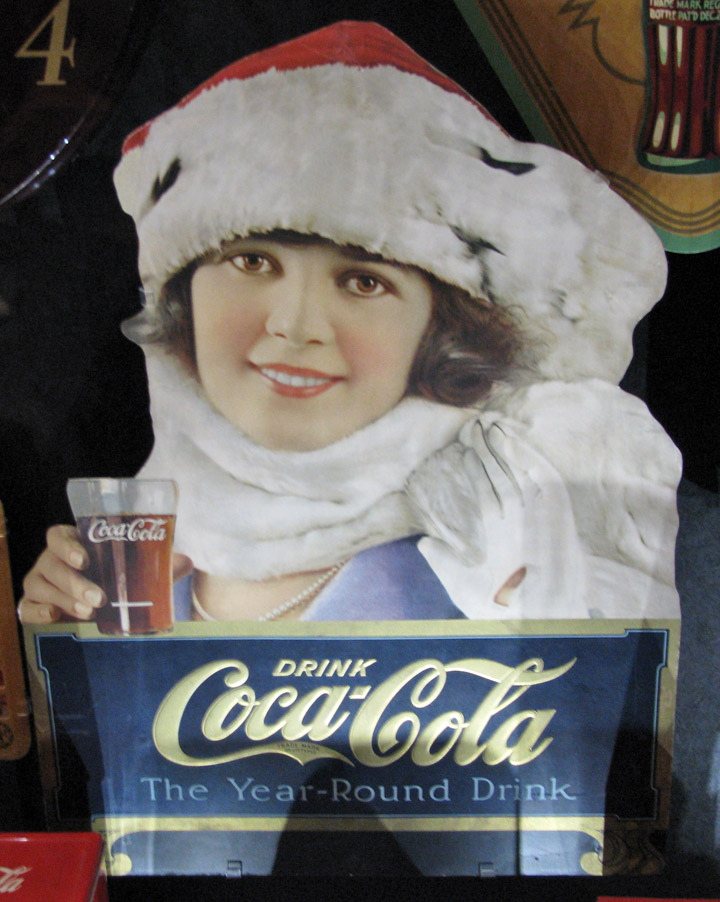 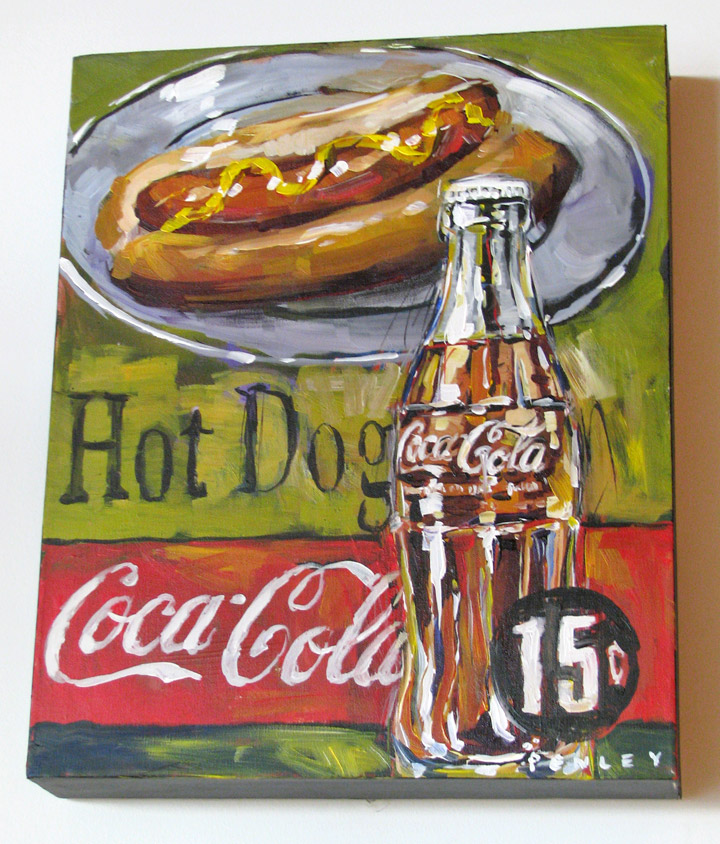 Once in the theatre, guests view Inside the Happiness Factory: A Documentary, a mockumentary featuring the characters of the Happiness Factory, a key part of Coca-Cola's current advertising campaign, "The Coke Side of Life." Following the film, the screen scrolls upward, revealing a walkway into "The Hub." From this point forward, guests can visit the various attractions in whatever order they choose, all of which can be accessed from The Hub. This is a departure from the old museum, which was toured in a linear fashion. 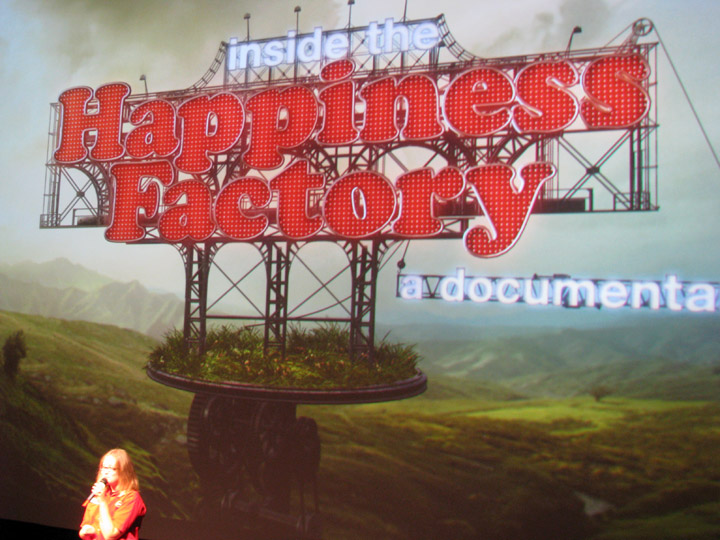 Inside the Happiness Factory

A number of attractions can be accessed from The Hub. On Level One in the Hub, guests can pose for a picture with the Coca-Cola mascot, the Coca-Cola Polar Bear. Guests can also listen to positive stories of The Coca-Cola Company's influence in the world from the people who have experienced the benefits in the Coca-Cola Connections attraction. 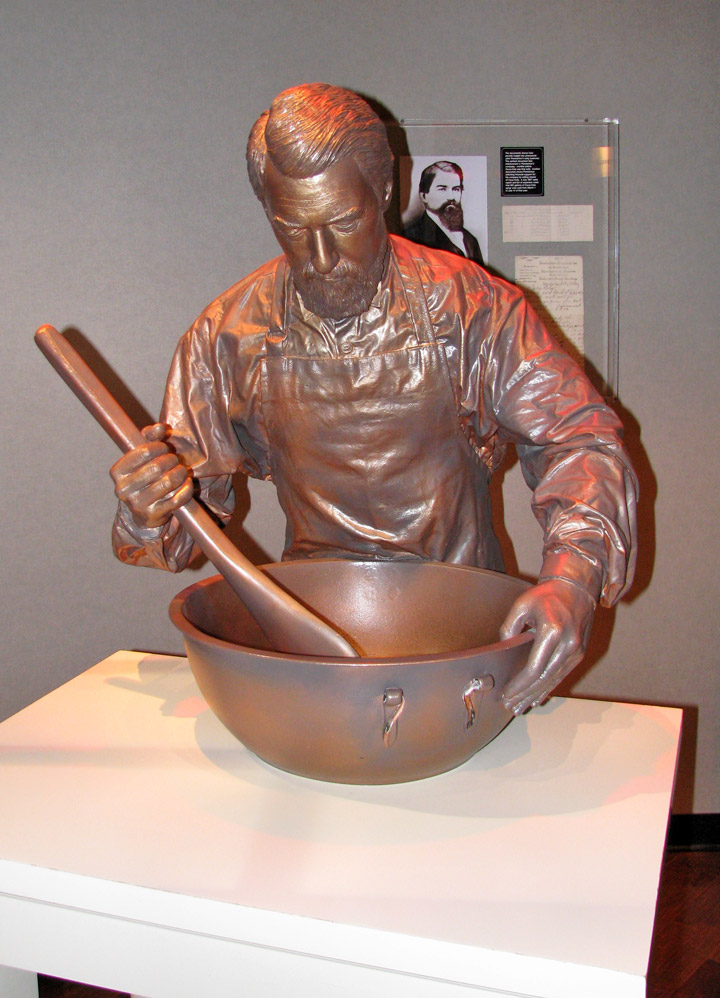 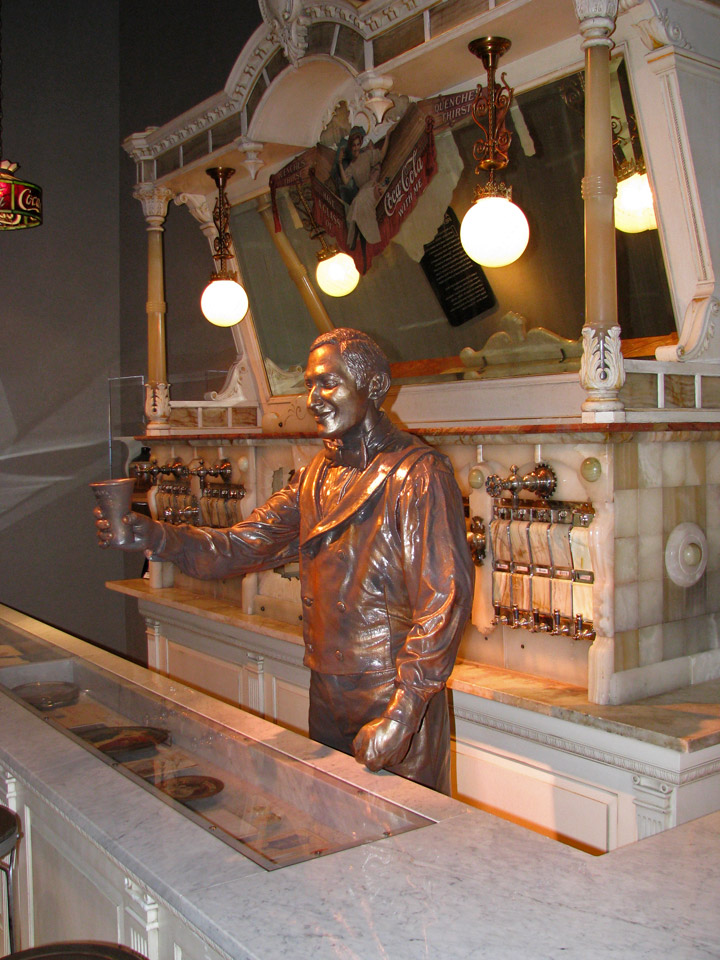 and presenting his drink to the public

Also on Level One is the Milestones of Refreshment attraction, showcasing artifacts from Coca-Cola's branding efforts. The oldest artifact is a packing slip from 1888 detailing Coca-Cola sales figures nationwide. The Bottle Works display gives guests a tour of a fully-functioning bottling line which produces commemorative 8-ounce bottles of Coca-Cola Classic that can be retrieved at the end of the tour. The bottling process is slowed down exponentially to allow guests an easier view. A complex robotic delivery system sends the bottles upstairs to "Taste It!" where guests retrieve them as they exit. 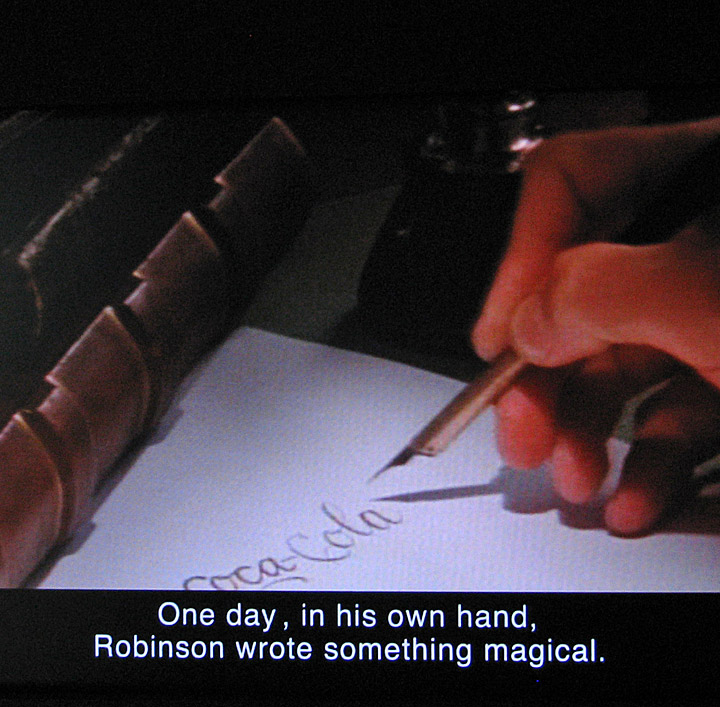 From Level Two of the Hub, visitors can visit the In Search of the Secret Formula attraction, a 4-D film presentation featuring an eccentric scientist and his assistant searching for "what makes a Coke a Coke". The seats in the theatre move and the attraction features wind and water effects. It also includes a ten-minute video pre-show providing exposition of the film's storyline. In the Pop Culture Gallery, guests gain insight into Coca-Cola's influence into popular culture. 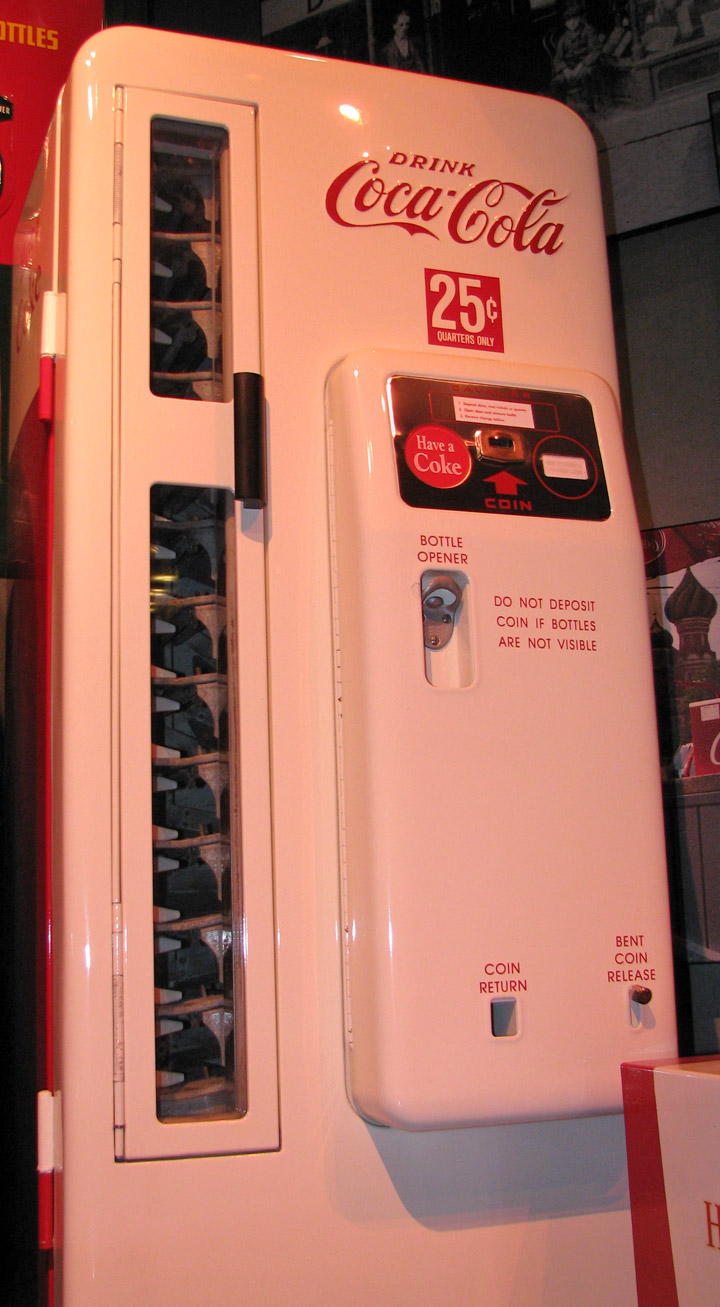 a coin opens the door to remove a bottle 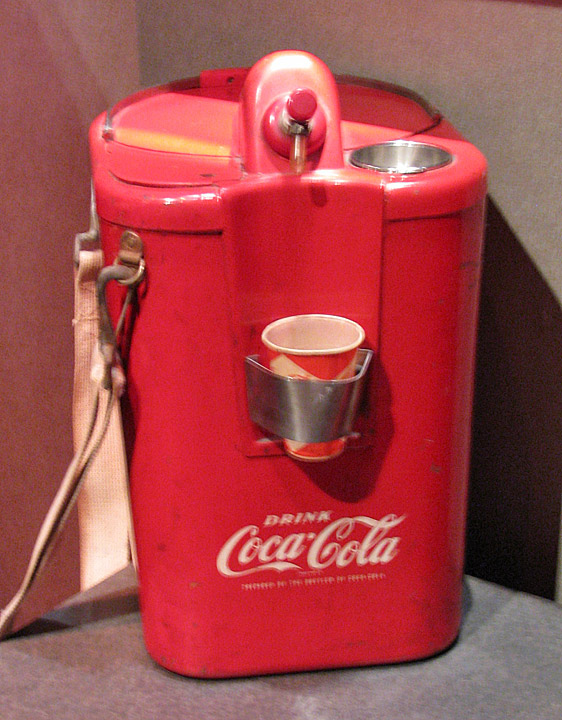 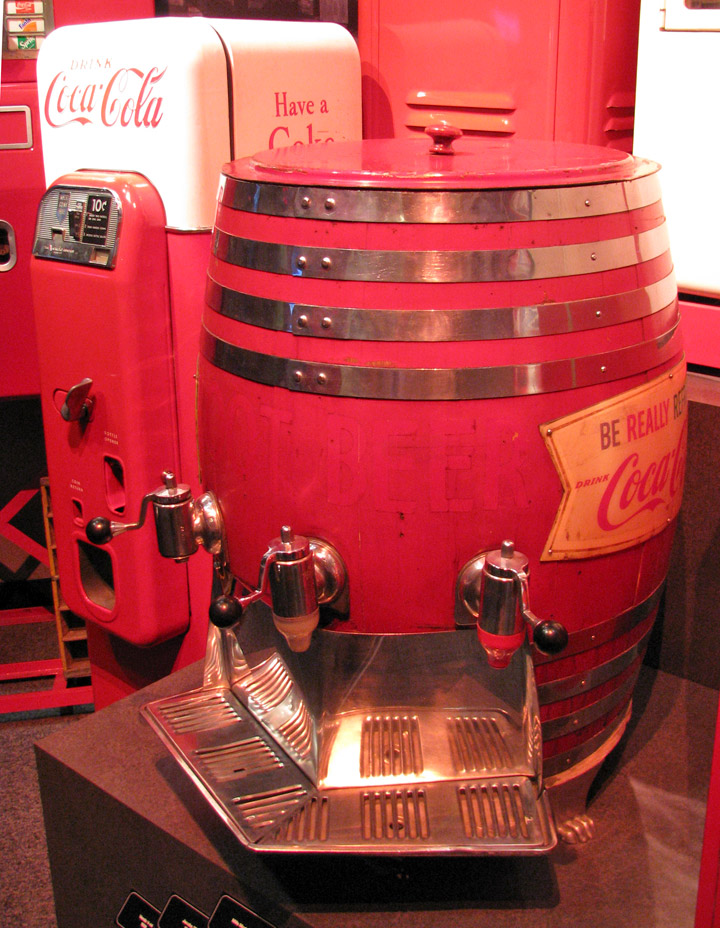 multiple taps at the bar

This section includes trinkets and memorabilia made from used Coca-Cola cans and bottles. It also features works by artists such as Andy Warhol, Norman Rockwell, and Steve Penley. This gallery also houses the museum's only acknowledgment of "New Coke," one of history's most infamous commercial failures, in the form of a video and artifacts from protests. 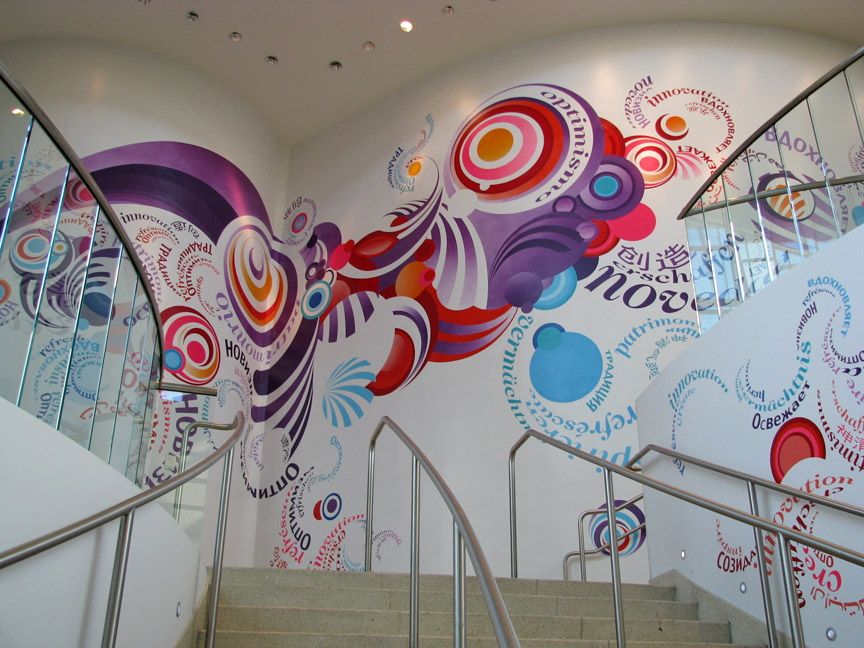 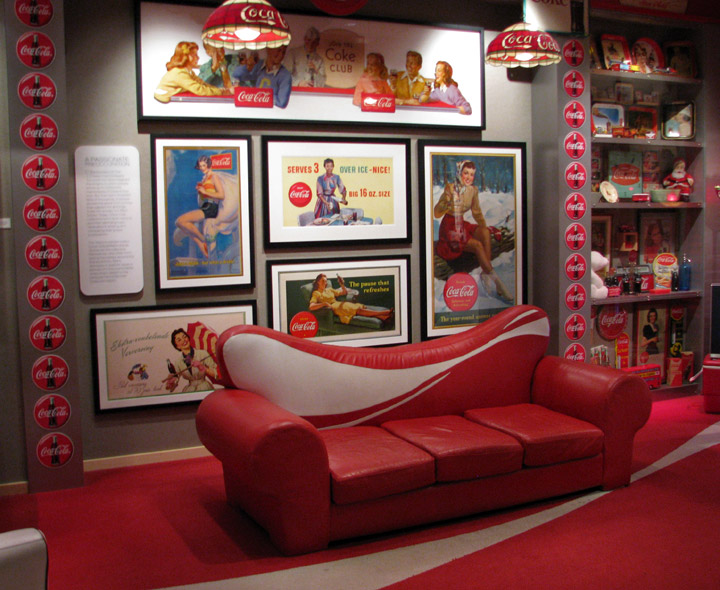 In the Perfect Pauses Theater, Coca-Cola's television advertising efforts are displayed in three short films, Magic Moments: Memorable Coca-Cola advertisements from the United States, Animation Celebration: Animated Coca-Cola-themed advertisements, and International Festival: Recent Coca-Cola advertisements from around the world. Guests can sample nearly 70 products offered by The Coca-Cola Company worldwide in the Taste It! exhibit, including most of the products offered in the United States. One room with a giant Coca-Cola contour bottle features only products that include the name "Coca-Cola" or a variation in their titles, including Coca-Cola Classic, Diet Coke, and most currently-available variations on the original formula (including Coca-Cola Vanilla, Coca-Cola Zero, Coca-Cola Cherry, and others). The last stop on Level Two, the Coca-Cola Store, features thousands of Coca-Cola-themed products for guests to purchase. Once guests enter the store, they cannot return to the museum. The store can also be accessed by guests not visiting the museum. 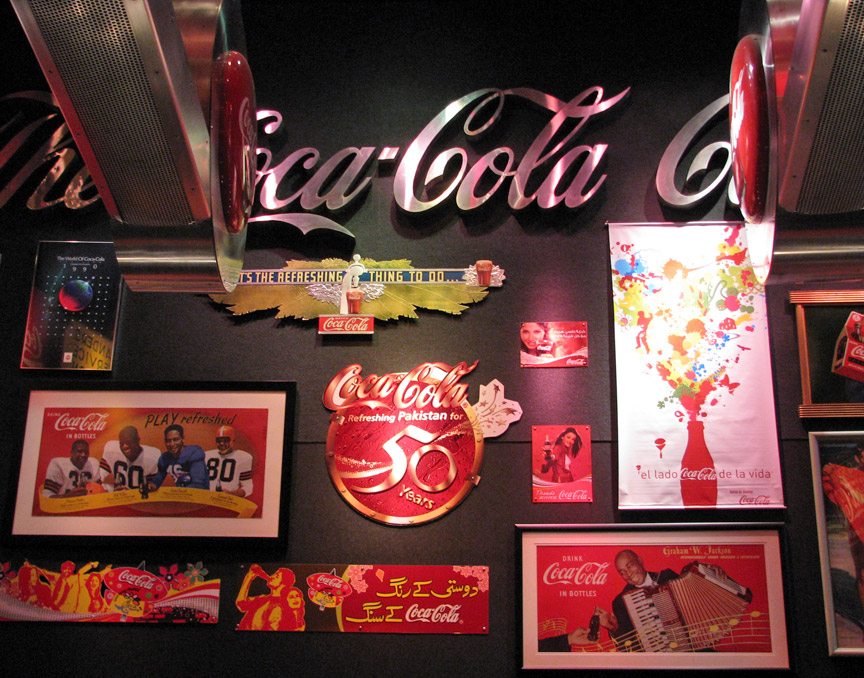 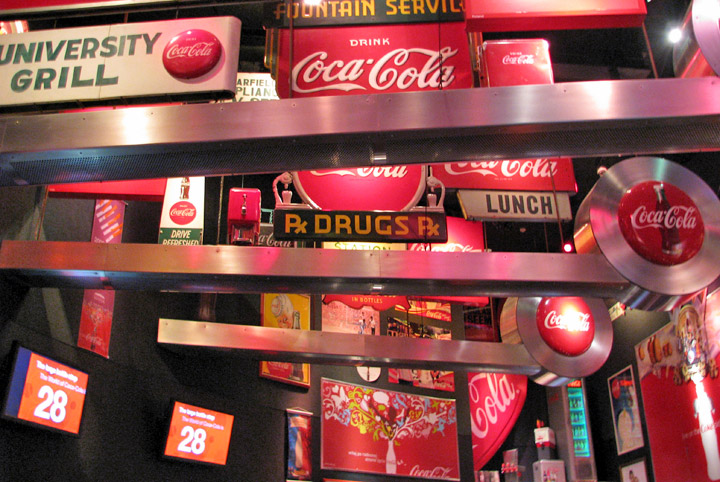 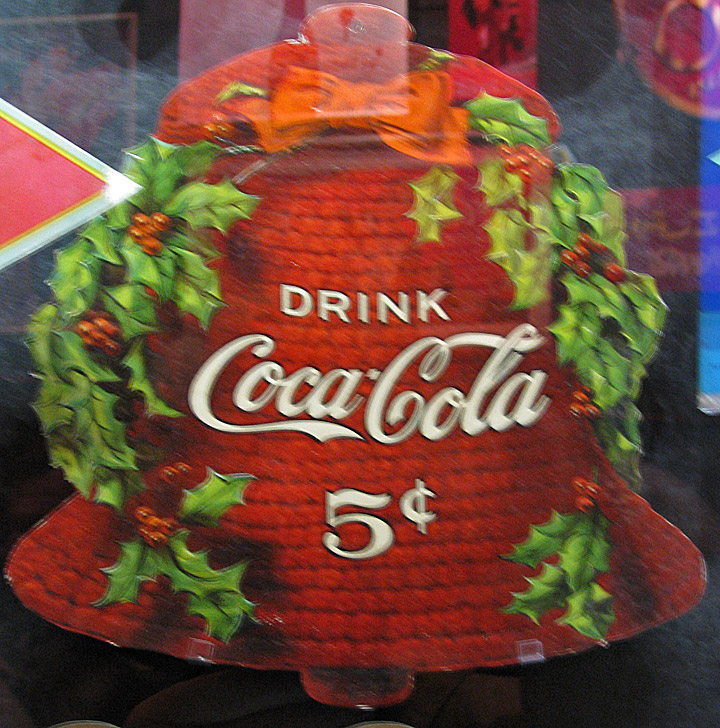 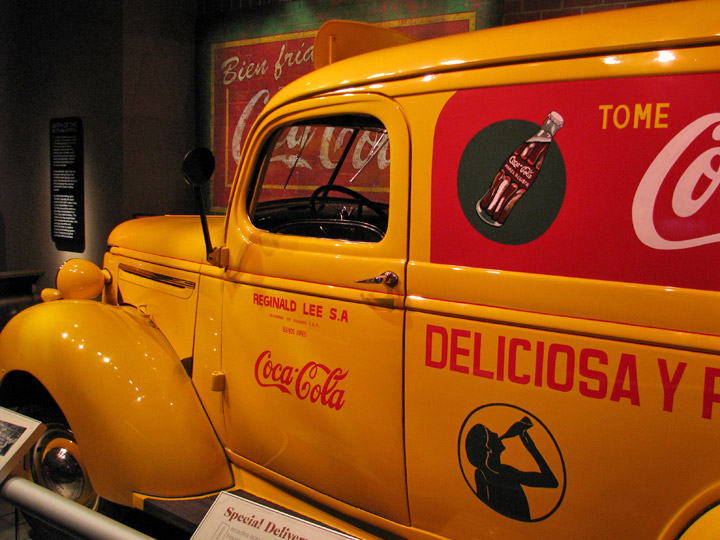 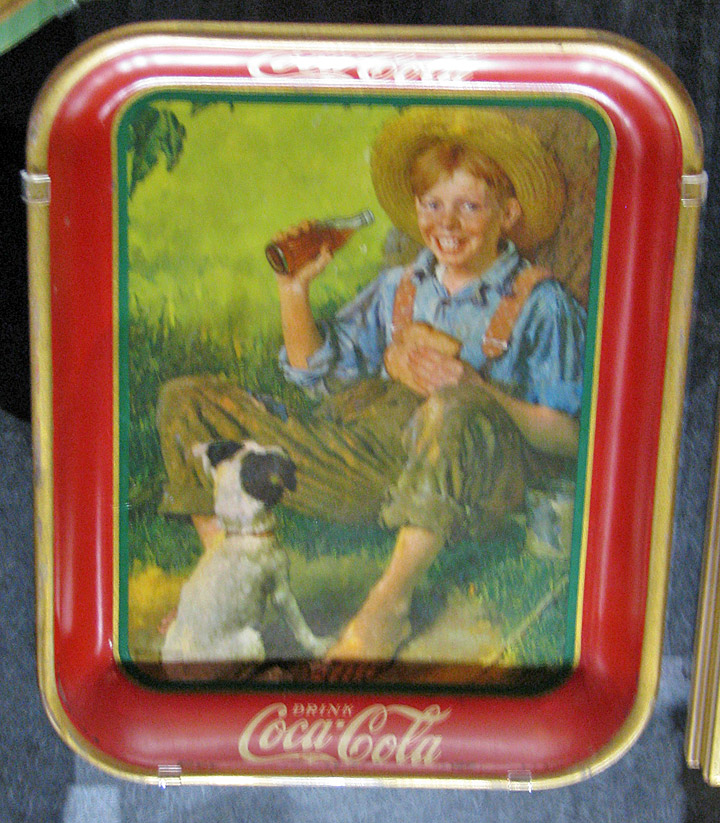 a tray based on the 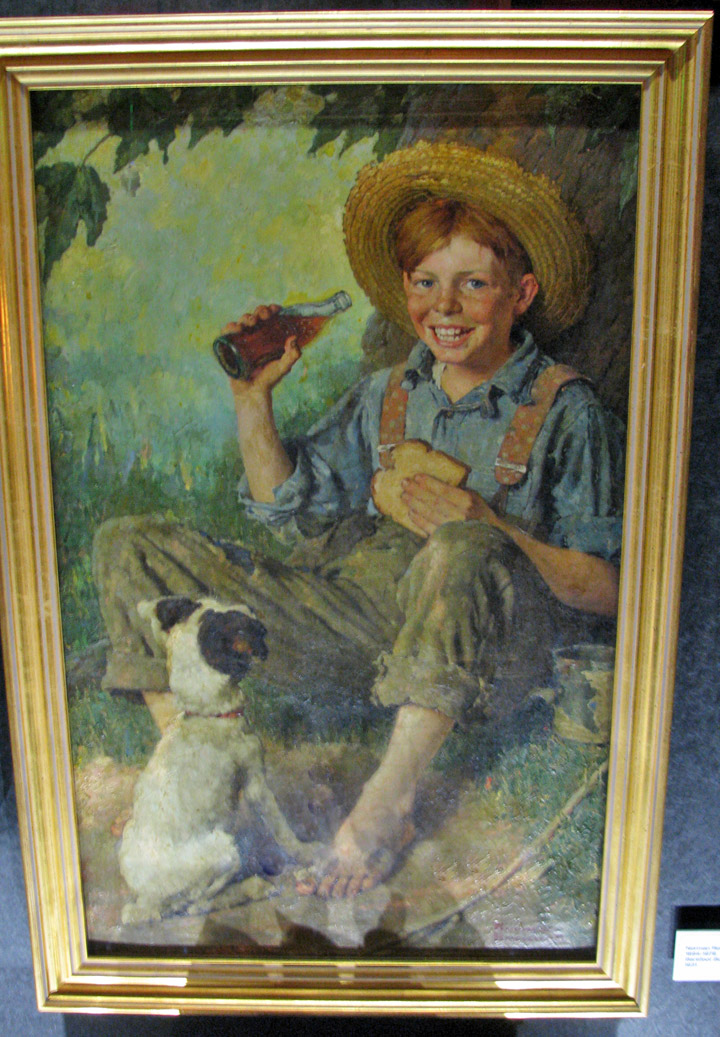 The World of Coca-Cola is expected to attract between 1.2 to 1.5 million visitors a year. Its design allows it to be easily updated as trends and advertising campaigns change, something the previous museum lacked. 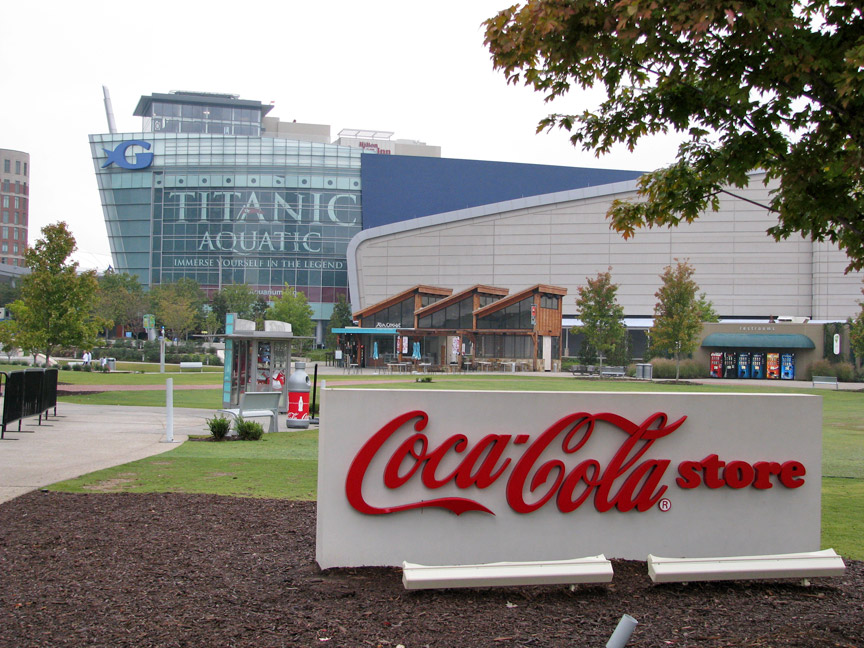 across from the Atlanta Aquarium 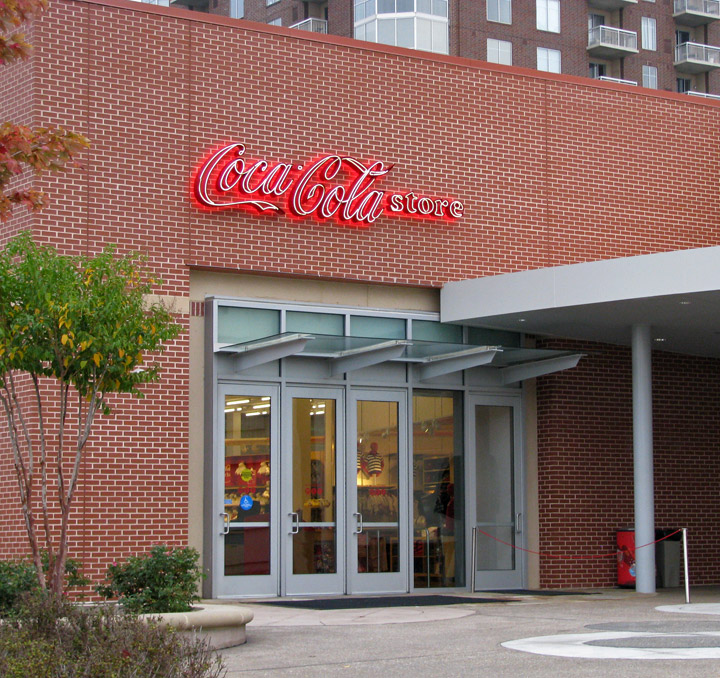