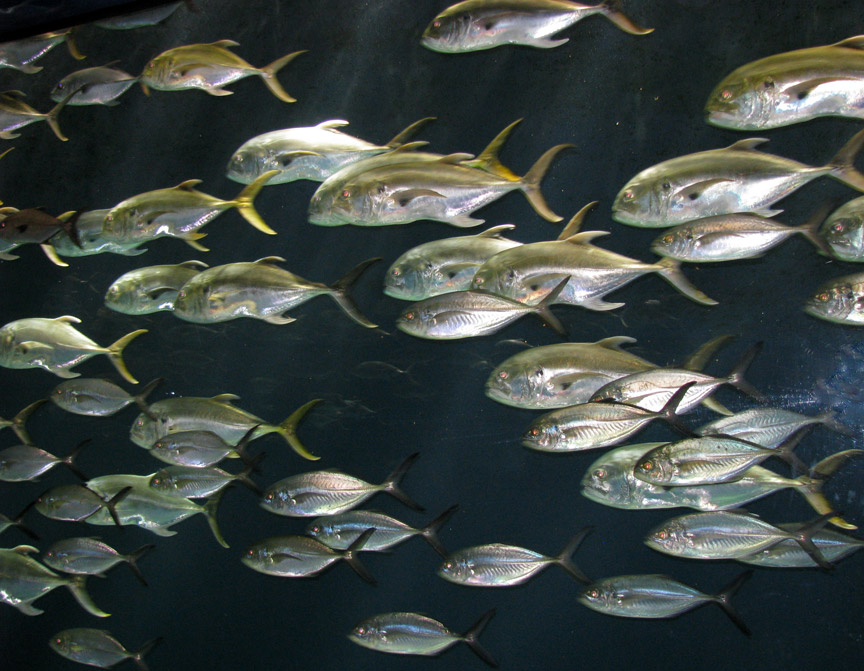 The Georgia Aquarium, located in Atlanta, Georgia at Pemberton Place, is billed as the "world's largest aquarium" with more than 8.1 million US gallons (31,000 m³) of marine and fresh water housing more than 100,000 animals of 500 different species. The aquarium's notable specimens include four young whale sharks, three beluga whales and a manta ray. 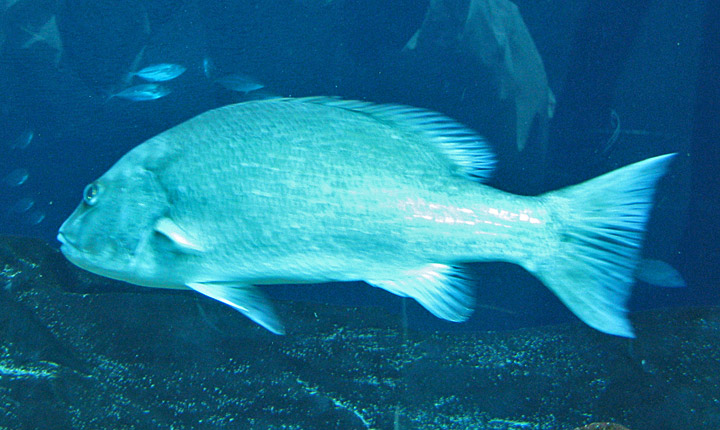 Funded mostly by a $250 million donation from Home Depot founder Bernie Marcus, the aquarium was built on a 20 acre (81,000 m²) site north of Centennial Olympic Park in downtown Atlanta. Marcus credited his 60th birthday dinner at the Monterey Bay Aquarium in 1990 as among the inspirations behind his desire to build an aquarium in Atlanta. 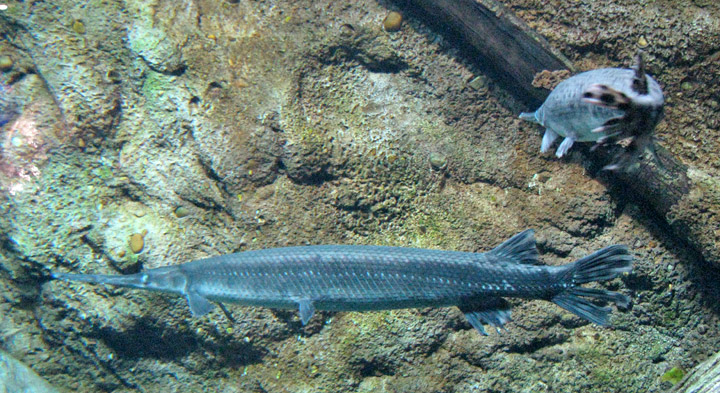 In November 2001, Bernard Marcus announced his idea to build an aquarium as a present to Atlanta, Georgia that would encourage both education and economic growth. Marcus and his wife Billi visited 56 aquariums in 13 countries to research and design a structure, and finally donated $250 million toward Georgia Aquarium’s construction. Due to financial contributions from AirTran Airways, BellSouth, Georgia Pacific, The Home Depot, Southern Company, Turner Broadcasting System, Time Warner, SunTrust, UPS, and the Coca-Cola Company, the company opened debt free. After 27 months and with 60 animal habitats, 16,400 square feet (1,520 m2) of ball room space, 2 food service kitchens, gift shops, a 4-D theater, an on-site restaurant, and a parking lot, the Georgia Aquarium opened first on November 21, 2005 to annual pass holders and then on November 23, 2005 to the general public. At $26 per adult, $21.50 for Seniors, and $19.50 for Children, the price of admission to the non-profit aquarium is among the most expensive in the country. The aquarium has nevertheless far exceeded visitor expectations, welcoming its 1 millionth guest on March 1, 2006, only ninety-eight days after opening. The aquarium sold over 290,000 annual passes for its first year, before sales were halted (to avoid a "private club" atmosphere, according to Aquarium Executive Director Jeff Swanagan). The Georgia Aquarium welcomed its three millionth guest on August 24, 2006 and its five millionth on May 23, 2007. 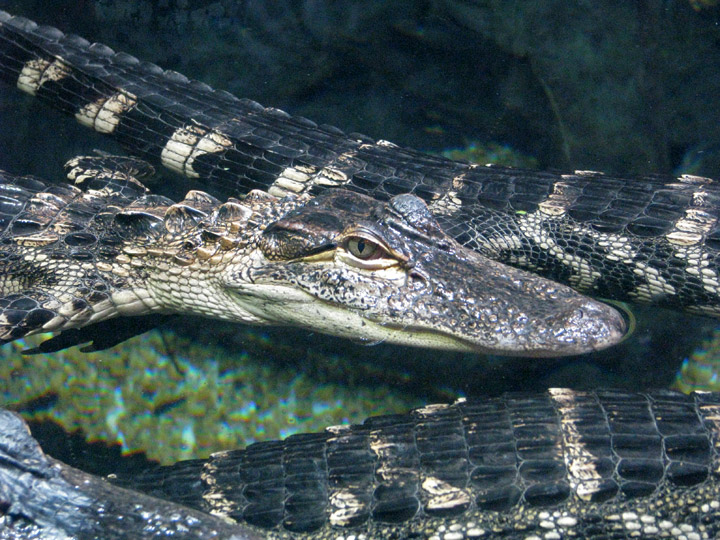 The Georgia Aquarium contains between 100,000 and 120,000 fish and other sea creatures, representing more than five hundred species. On June 14, 2005, the total number of specimens was unveiled after having previously being reported as "over 55,000". Marcus was quoted in the Atlanta Journal-Constitution as saying: "I have been saying that we would have more than 55,000 fish; I just never said how many more." The fish were transported from Taiwan to the aquarium by UPS (which is headquartered in nearby Sandy Springs) in 42 tanks aboard an MD-11. UPS donated the cost of the shipping, estimated at over US$200,000. 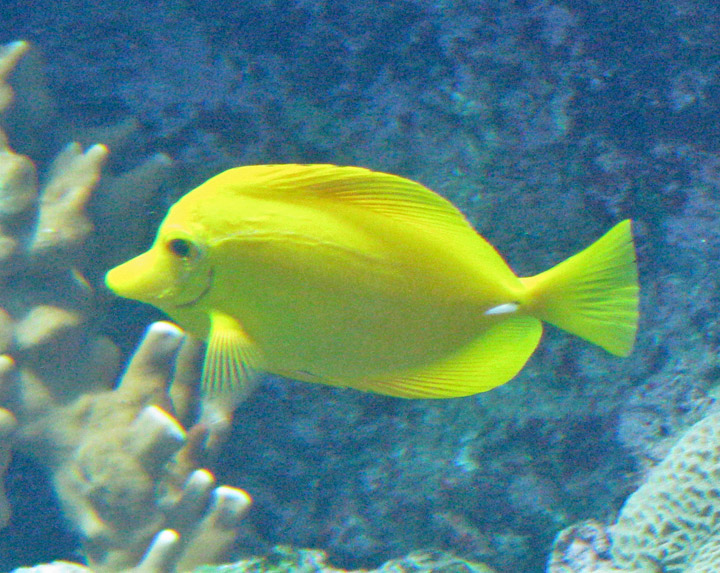 The aquarium's most famous specimens were four young whale sharks from Taiwan named Ralph, Norton, Alice and Trixie, after the primary characters from The Honeymooners. Ralph died from peritonitis on January 11, 2007, and Norton followed on June 13, 2007 when the aquarium made the decision to euthanize him after he had shown signs of erratic swimming and had stopped eating. Ralph and Norton were with the Georgia Aquarium at its opening; Alice and Trixie joined the aquarium June 3, 2006. This is the first time whale sharks have been kept in an aquarium outside of Asia. The sharks are kept in a 6.3 million gallon (24,000 m³) exhibit. On May 25, 2007, Taiwan's Fisheries Agency announced the Aquarium had been approved to receive two more whale sharks before Taiwan bans the animals' capture in 2008. On June 1, 2007 the two new whale sharks arrived at the aquarium. The two sharks, caught earlier in 2007, are named Taroko, commemorating Taroko Gorge National Park, and Yushan after Taiwan's Jade Mountain. 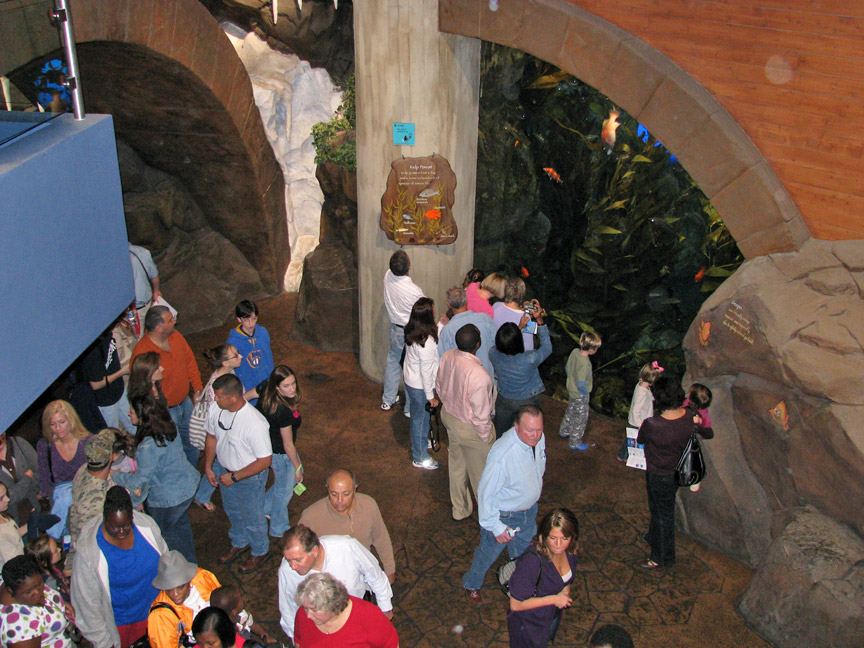 The aquarium is currently only one of two aquariums in the United States to exhibit a Great Hammerhead Shark. The aquarium was also home to five 11 foot (3 m) long beluga whales. Two males named Nico and Gasper were rescued from a Mexico City amusement park where they lived under a roller coaster. Because of insufficient weight, skin lesions, and a bone disease, on January 2, 2007, Gasper was euthanized. Marina died on December 1, 2007 of what may have been natural causes (she was 25 years old). The remaining females (Natasha and Maris) are on breeding loan from the New York Aquarium. The aquarium is among six other US aquariums, including Chicago's Shedd Aquarium, with belugas in their collections. 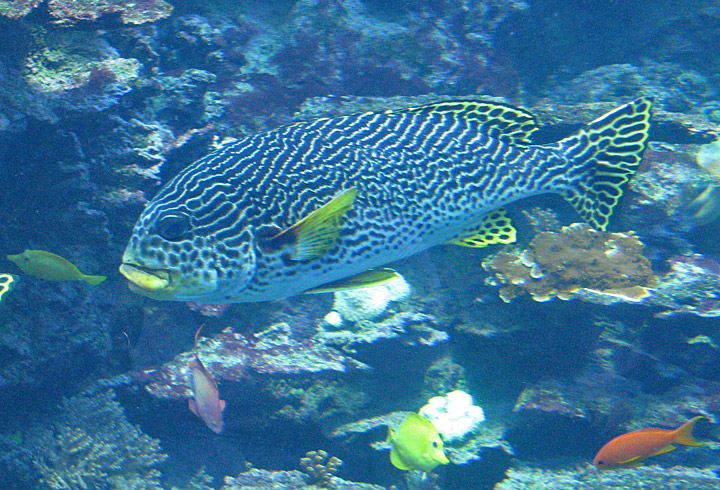 Continuing its drive to display marine animals rarely seen in the United States, the aquarium acquired a manta ray from an aquarium facility in Durban, South Africa. Named "Nandi," the manta was caught by accident in nets meant to protect the coast from sharks. Officials at the Durban facility determined that the manta had outgrown its home, and offered the manta to the much-larger Georgia Aquarium. Nandi first went on display in the Ocean Voyager exhibit on August 25, 2008 as the first manta ray on display in the country, and making the aquarium one of only four in the world to display one. 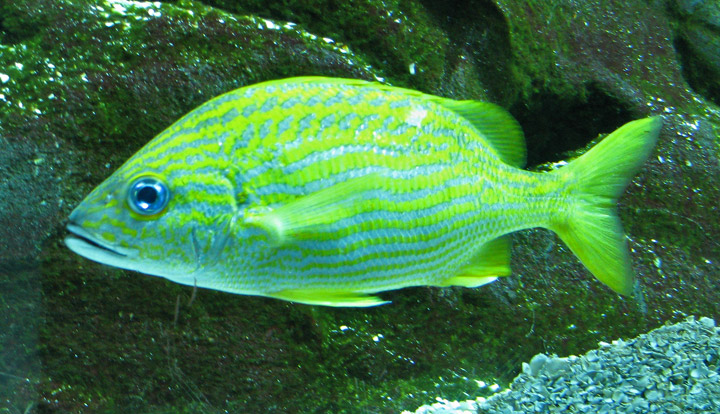 The aquatic animals are displayed in five different galleries: Georgia Explorer, Tropical Diver, Ocean Voyager, Cold- Water Quest, and River Scout. Each corresponds to a specific environment. At the left as one enters the aquarium is the Georgia Explorer exhibit, geared especially towards children. It features a number of touch tanks with rays and sharks as well as exhibits featuring sea turtles and the wildlife of Gray's Reef - a National Marine Sanctuary off the Georgia Coast. The second exhibit, River Scout, also reflects regional environments. It features an overhead river where visitors can see North American fish from the bottom up. In addition to local specimens, this exhibit displays piranha, electric fish, and other unusual freshwater life. The third section of the aquarium, Cold Water Quest, features animals from the polar regions of the world and contains most of the mammals in the aquarium's collection. This exhibit includes beluga whales in the aquarium's second largest habitat, California sea lions, Japanese spider crabs, and African black-footed penguins. The fourth exhibit, entitled Ocean Voyager, includes the vast majority of the aquarium's water and almost 100,000 fish. This exhibit is designed to feature the life of the Mesoamerican Barrier Reef System, and showcases the aquarium's whale sharks, as well as a 100 foot (30 m) underwater tunnel and the world's second largest viewing window. The final exhibit takes an artistic turn, as the Tropical Diver exhibit features many curious and haunting forms of aquatic life, including a living reef with live coral. The aquarium also features a "4D" movie and other attractions, including the Ocean Voyager - Journey With Giants exhibit hall where the Chedd-Angier-Lewis production company, with Electrosonic Inc., has produced the Open Ocean Touchwall, a dynamic, interactive projection for species identification. This is a virtual aquarium where larger than life, fully articulated 3-D renderings of Open Ocean fish swim across six panels assembled to simulate a tank. Guests are invited to reach out and place hands or fingers on the fish. As they do so, fun and informative content bubbles appear to educate the guest about the particular species they have chosen. 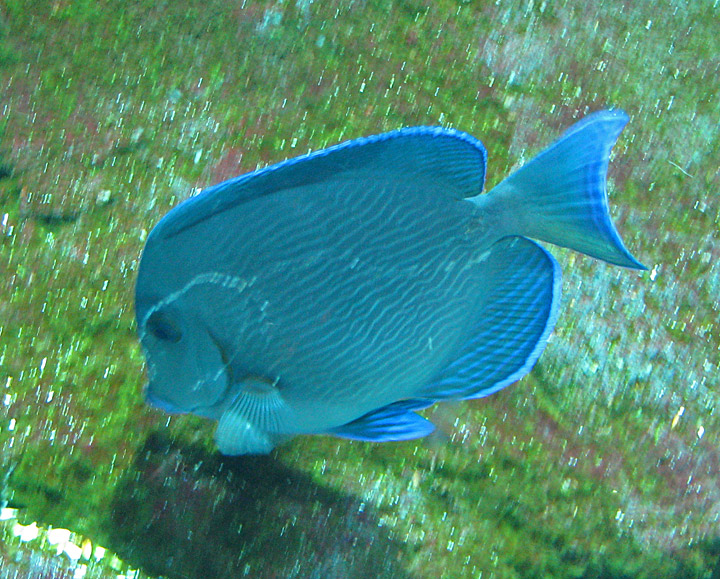 The aquarium development was managed by Heery International who served as the Program Manager / Owner's representative for the Georgia Aquarium. The base building was designed by Atlanta-based architecture firm Thompson, Ventulett, Stainback & Associates (TVS). In addition, TVS Interiors did the interior design of the facility as well as the design of the two retail shops located inside the aquarium. The aquarium galleries were designed by the St. Louis based firm of PGAV. 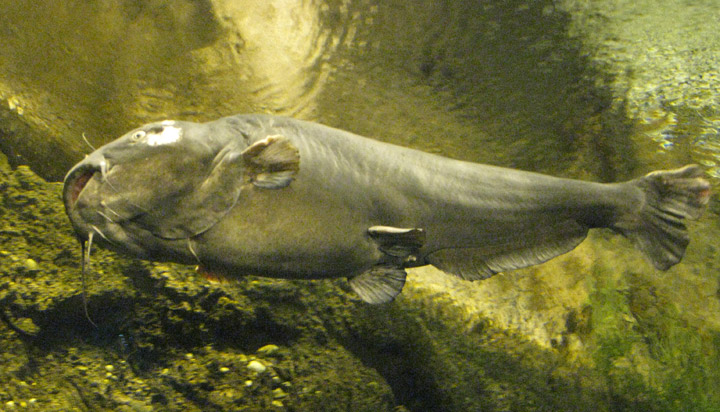 According to aquarium founder Bernard Marcus, the aquarium's conservation and environmental mission is just as important as its status as an attraction. Long before opening, the aquarium was already working with Georgia Tech and Georgia State University in Atlanta and the University of Georgia in Athens to help save endangered species through education and research programs. 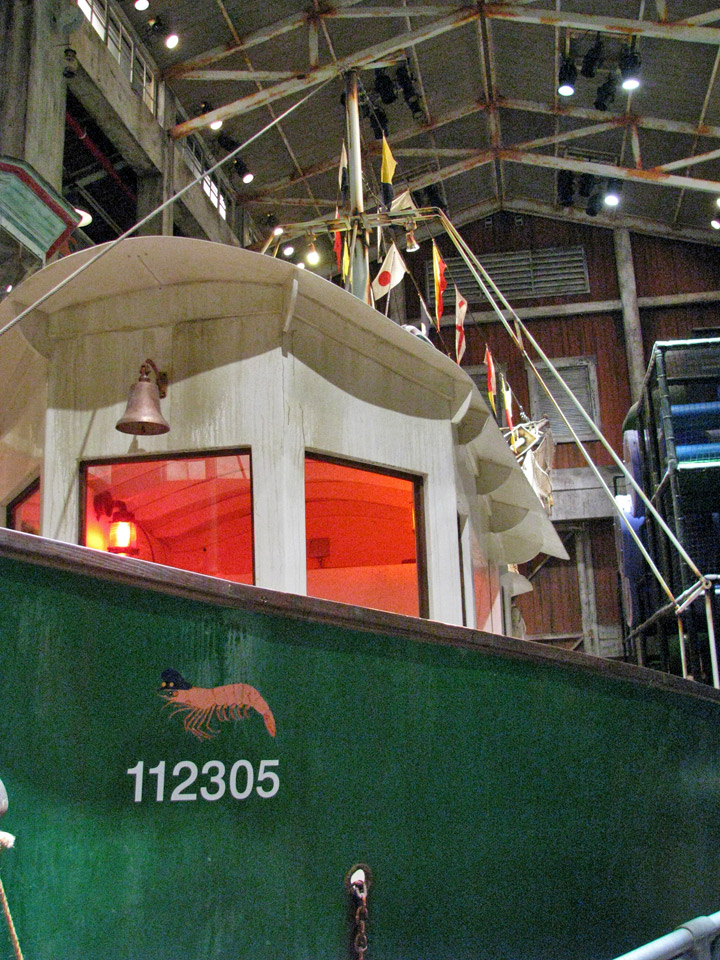 The acquisition of the male beluga whales, previously suffering in an inadequate environment, was hailed by Marcus as a prime example of the type of conservation activities the Aquarium should be involved with. Approximately 100 tarpon stranded in a tidal pool at Skidaway Island, off the Georgia coast, were rescued for the collection. Coral used in exhibits at the Aquarium is manmade in a collaboration between Georgia Tech and the University of the South Pacific, produced by suspending blocks of pumice over a reef near the village of Tagaqe, Fiji for eight months so that seaweeds and reef invertebrates could establish colonies. 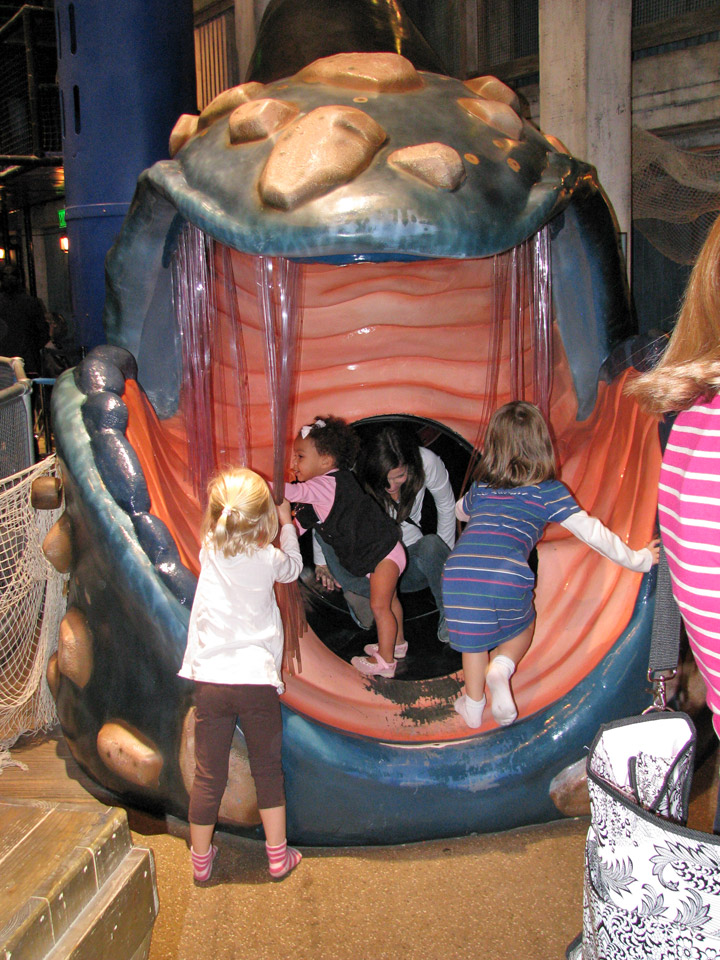 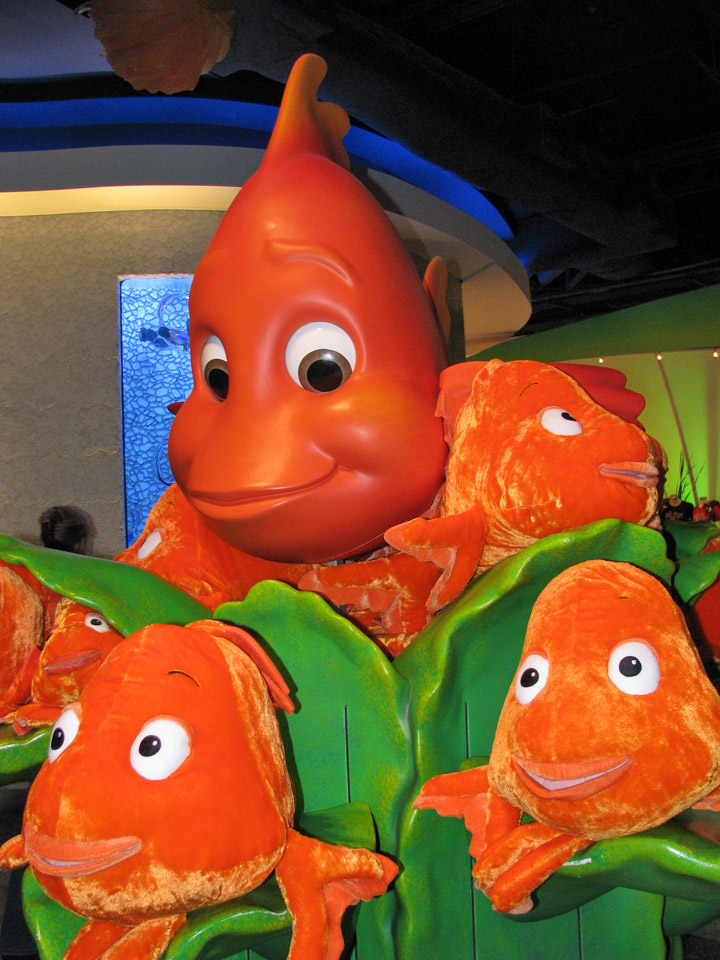 or a new toy in the gift shop