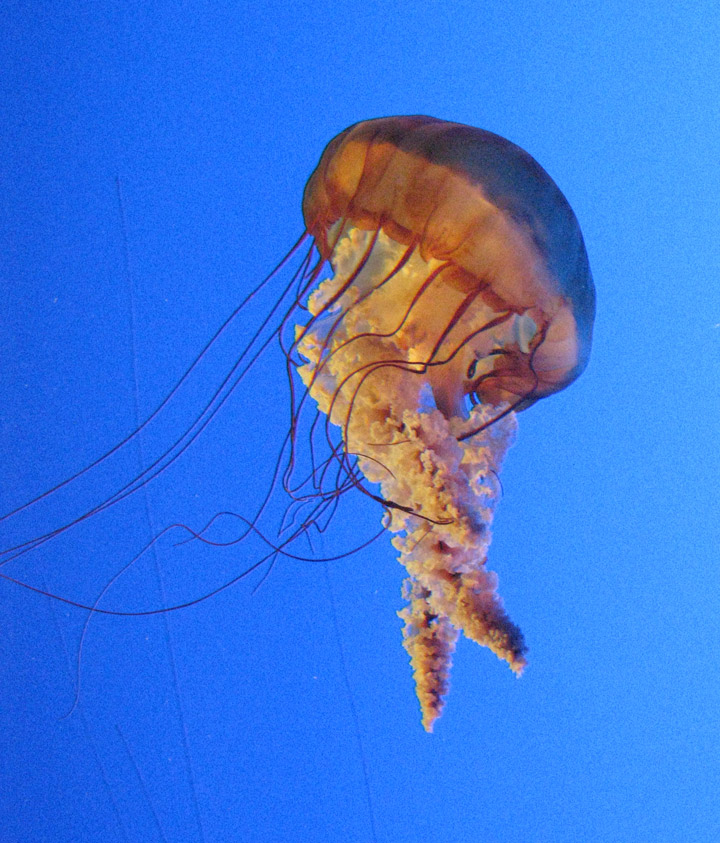 Jellyfish are free-swimming members of the phylum Cnidaria. They have several different basic morphologies that represent several different cnidarian classes including the Scyphozoa (about 200 species), Staurozoa (about 50 species), Cubozoa (about 20 species), and Hydrozoa (about 1000-1500 species that make jellyfish and many more that do not)[1][2]. The jellyfish in these groups are also called, respectively, scyphomedusae, stauromedusae, cubomedusae, and hydromedusae; "medusa" (plural "medusae") is another word for jellyfish. Jellyfish are found in every ocean, from the surface to the deep sea. Some hydrozoan jellyfish, or hydromedusae, are also found in fresh water. Most of the information about jellyfish that follows in this article is about scyphozoan jellyfish, or scyphomedusae. These are the big, often colorful, jellyfish that are common in coastal zones worldwide. 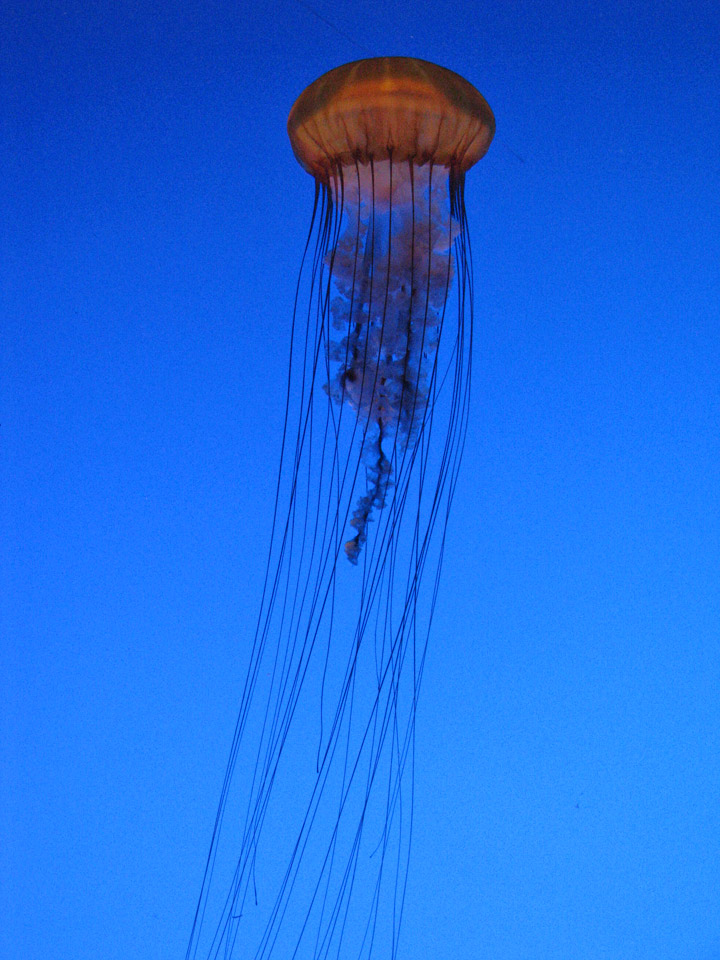 In its broadest sense, the term jellyfish is sometimes used also to refer to members of the phylum Ctenophora. Although not closely related to cnidarian jellyfish, ctenophores are also free-swimming planktonic carnivores, are also generally transparent or translucent, and occur in shallow to deep portions of all the world's oceans. Ctenophores move using eight rows of fused cilia that beat in metachronal waves that diffract light, so that they sparkle with all of the colors of the rainbow. The rest of this article deals only with jellyfish in the phylum Cnidaria. 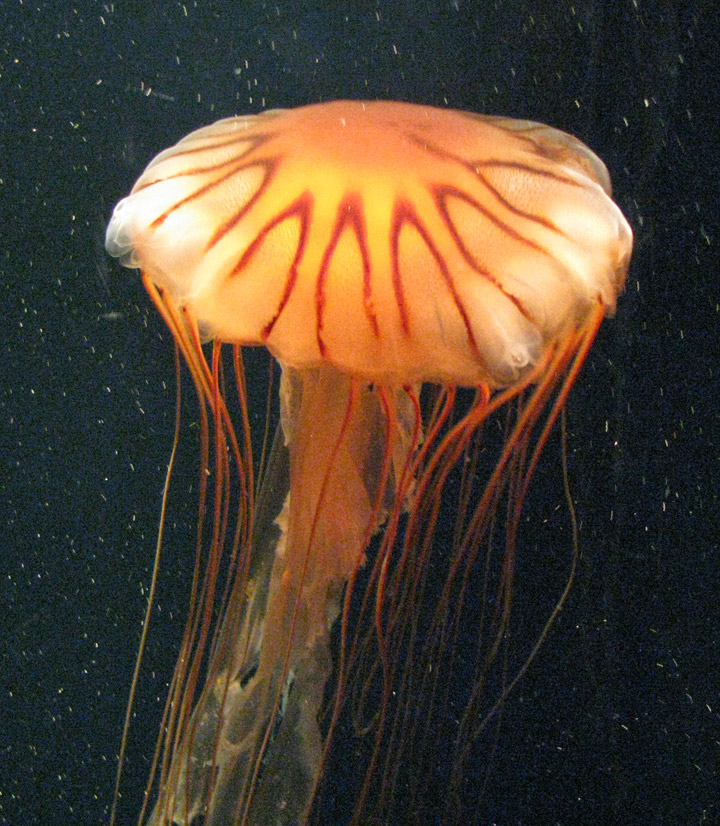 A jellyfish detects the touch of other animals using a nervous system called a "nerve net", located in its epidermis. Touch stimuli are conducted by nerve rings, through the rhopalial lappet, located around the animal's body, to the nerve cells. Some jellyfish also have ocelli: light-sensitive organs that do not form images but are used to determine up from down, responding to sunlight shining on the water's surface. They also sting when another organism touches their tentacles.  Jellyfish don't have specialized digestive, osmoregulatory, central nervous, respiratory, or circulatory systems. They digest using the gastrodermal lining of the gastrovascular cavity, where nutrients are absorbed. They do not need a respiratory system since their skin is thin enough that the body is oxygenated by diffusion. They have limited control over movement and mostly free-float, but can use the hydrostatic skeleton of the water pouch to accomplish vertical movement through pulsations of the disc-like body. 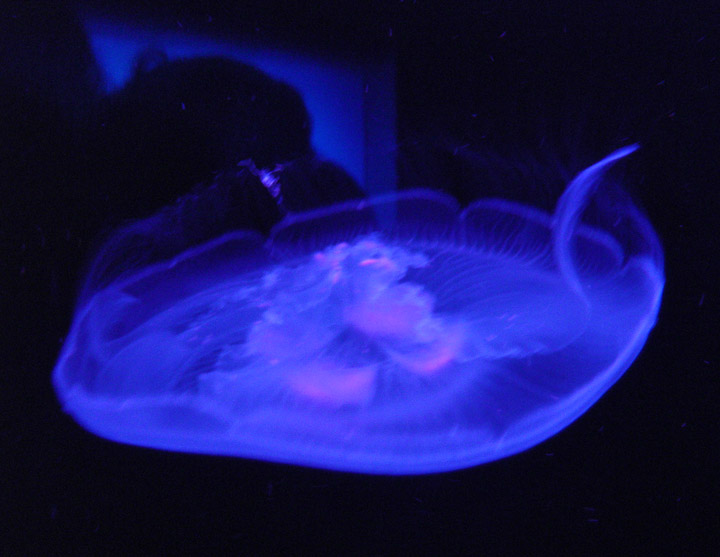 Jellyfish are, by the nature of their life cycles, "bloomy". Their presence in the ocean is usually seasonal, responding to the availability of prey, which is seasonal in most places, increasing with temperature and sunshine in the spring and summer. Ocean currents tend to congregate jellyfish into large swarms or "blooms", consisting of hundreds or thousands of individuals. In addition to sometimes being concentrated by ocean currents, blooms can furthermore be the result of unusually high populations in some years. The formation of these blooms is a complex process that depends on ocean currents, nutrients, temperature and ambient oxygen concentrations. 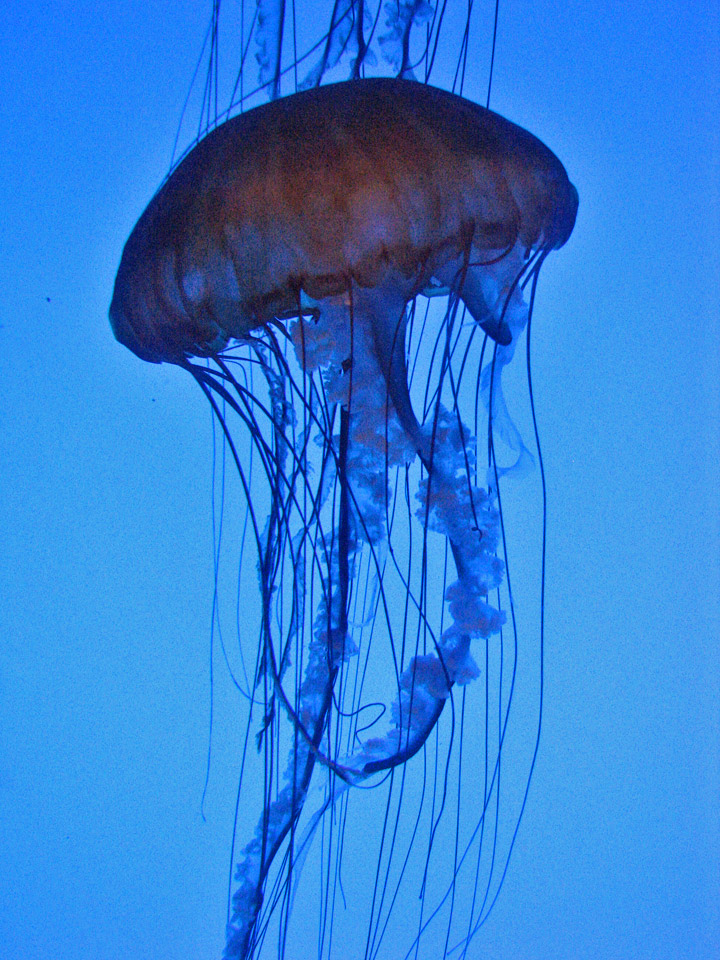 The news media recently has been full of stories about increases in jellyfish blooms. It is important to realize, however, that there is very little data about changes in global jellyfish populations over time, besides "impressions" in the public memory. In most places in the world, scientists have no quantitative data about what jellyfish populations used to be like, or in fact, quantitative data about what is happening in the present. Recent speculations about increases in jellyfish populations often are based on no "before" data. Furthermore, many recent claims by the press that "this has never happened before" or "these jellyfish have never before been seen here" are the result of short community memory (one generation or less, usually), and careful research can often determine that whatever occurrence is under consideration has happened before in that location, although infrequently. 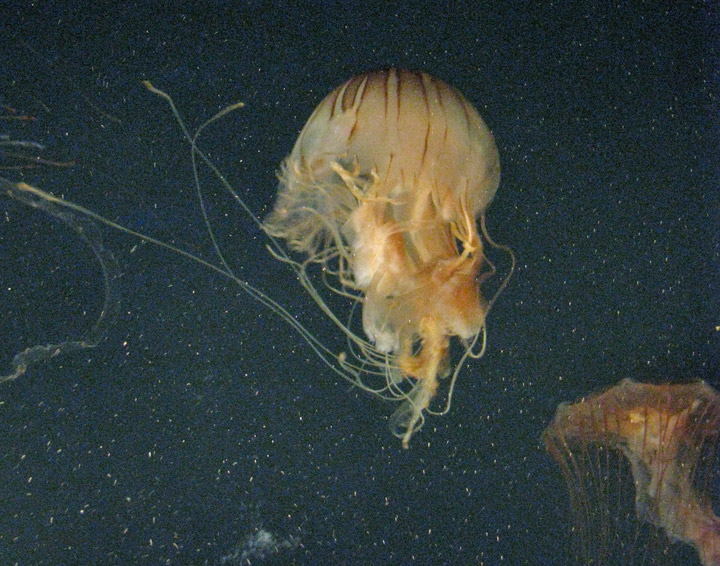 According to Claudia Mills of the University of Washington, increasing frequency of jellyfish blooms globally might be attributed to humans' impact on marine systems. She says that in some locations jellyfish may be filling ecological niches formerly occupied by overfished creatures, but notes that we lack data to show that is indeed true. Jellyfish researcher Marsh Youngbluth further clarifies that "jellyfish feed on the same kinds of prey as adult and young fish, so if fish are removed from the equation, jellyfish are likely to move in." 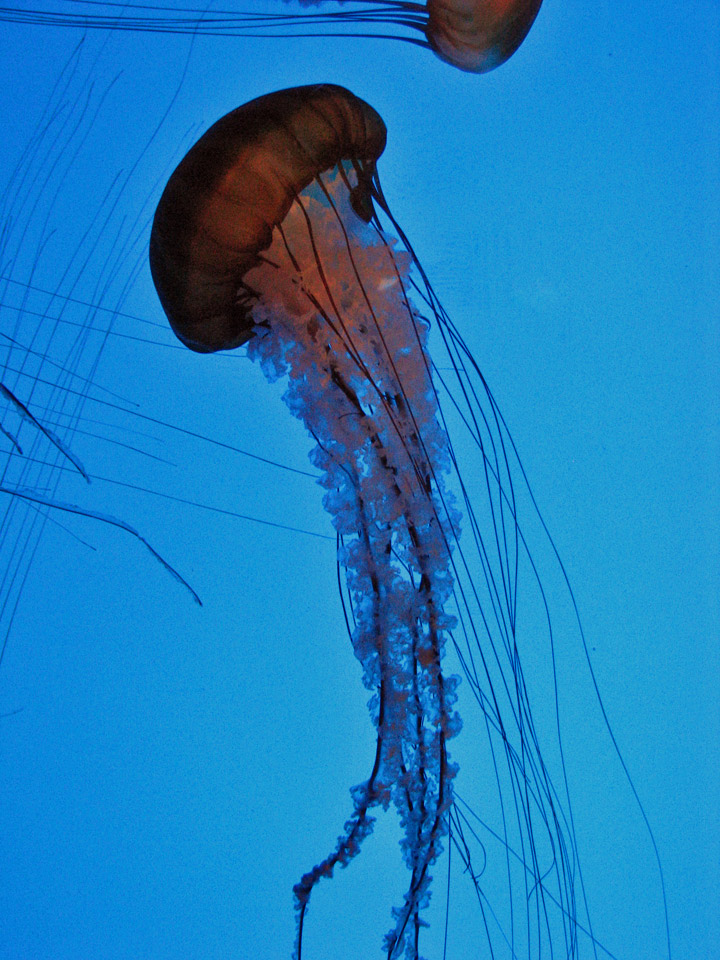 Some jellyfish populations that have shown clear increases in the past few decades are "invasive" species, newly arrived from other parts of the world: examples of regions with troublesome non-native jellyfish include the Black Sea and the Caspian Sea, the Baltic Sea, the eastern Mediterranean coasts of Egypt and Israel, and the American coast of the Gulf of Mexico. Populations of some invasive species expand rapidly because there are no natural predators in the ecosystem to check their growth - such blooms would not necessarily reflect over fishing or other environmental problems.  Increased nutrients in the water, ascribed to agricultural runoff, have also been cited as an antecedent to the proliferation of jellyfish. Monty Graham, of the Dauphin Island Sea Lab in Alabama, says that "ecosystems in which there are high levels of nutrients ... provide nourishment for the small organisms on which jellyfish feed. In waters where there is eutrophication, low oxygen levels often result, favoring jellyfish as they thrive in less oxygen-rich water than fish can tolerate. The fact that jellyfish are increasing is a symptom of something happening in the ecosystem."t; 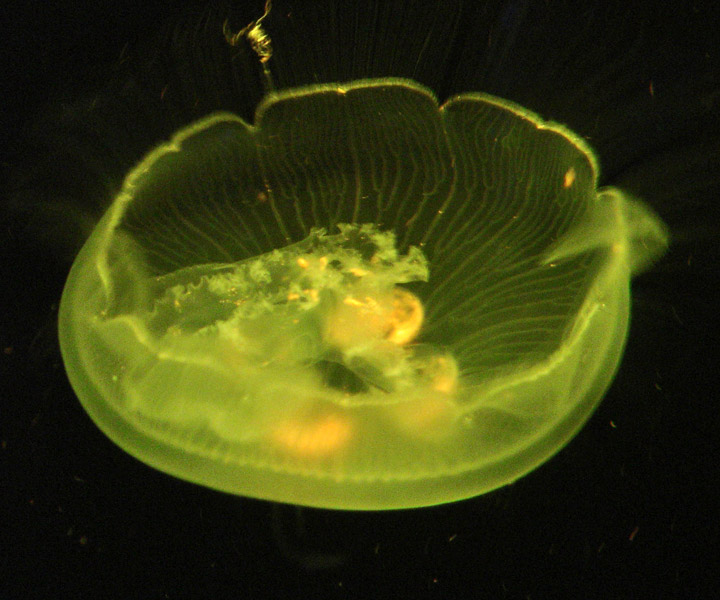 By sampling sea life in a heavily fished region off the coast of Namibia, researchers found that jellyfish have overtaken fish in terms of biomass. The findings represent a careful, quantitative analysis of what has been called a "jellyfish explosion" following intense fishing in the area in the last few decades. The findings were reported by Andrew Brierley of the University of St. Andrews and his colleagues in the July 11, 2006 issue of the journal Current Biology.  Areas which have been seriously affected by jellyfish blooms include the northern Gulf of Mexico. In that case, Graham states, "Moon jellies have formed a kind of gelatinous net that stretches from end to end across the gulf." 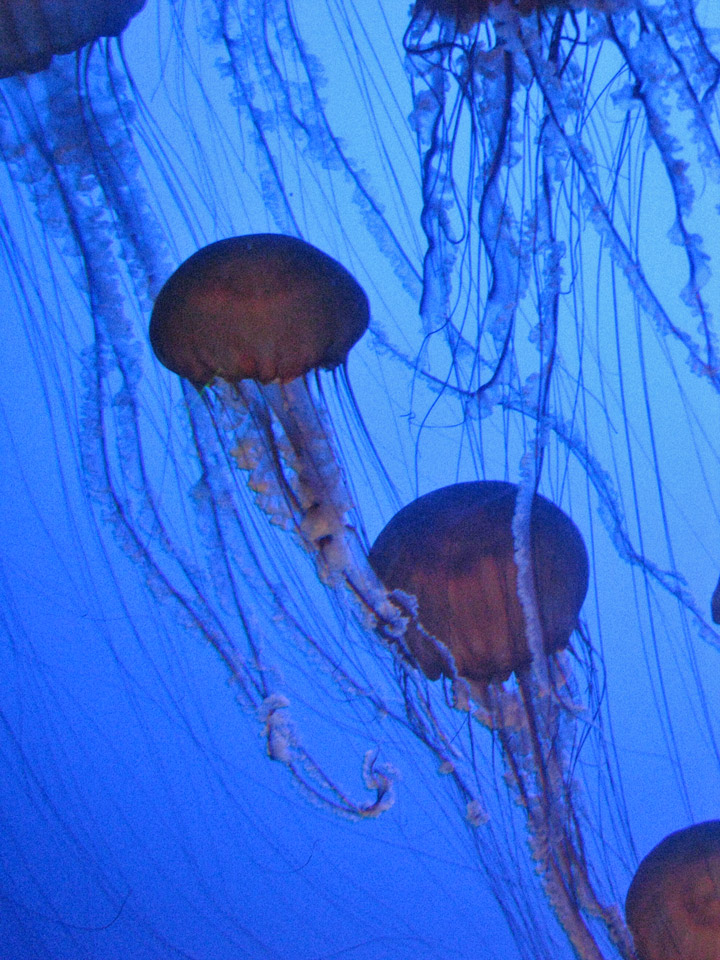 Most jellyfish pass through two distinct life history phases (body forms) during their life cycle. The first is the polypoid stage, when the animal takes the form of a small stalk with feeding tentacles; this polyp may be sessile, living on the bottom or on similar substrata such as floats or boat-bottoms, or it may be free-floating or attached to tiny bits of free-living plankton or even (rarely) fish. Polyps generally have a mouth surrounded by tentacles that face upwards, like miniatures of the closely-related anthozoan polyps (sea anemones and corals), also of the phylum Cnidaria. Jellyfish polyps may be solitary or colonial, and some bud asexually by various means, making more polyps. Most are very small, measured in millimeters or a fraction of an inch tall.

In the second stage, the tiny polyps asexually produce jellyfish, each of which is also known as a medusa. Tiny jellyfish (usually only a millimeter or two across) pull away from the polyp by swimming, and then grow and feed in the plankton. Medusae have a radially symmetric, umbrella-shaped body called a bell, which is usually supplied with marginal tentacles - fringe-like protrusions from the border of the bell that are used to capture prey. (Medusa is also the word for jellyfish in Finnish, Portuguese, Romanian, Hebrew, Serbian, Croatian, Spanish, French, Italian, Hungarian, Polish, Czech, Slovak, Russian and Bulgarian.) A few species of jellyfish do not have the polyp portion of the life cycle, but go from jellyfish to the next generation of jellyfish through direct development of the fertilized eggs. 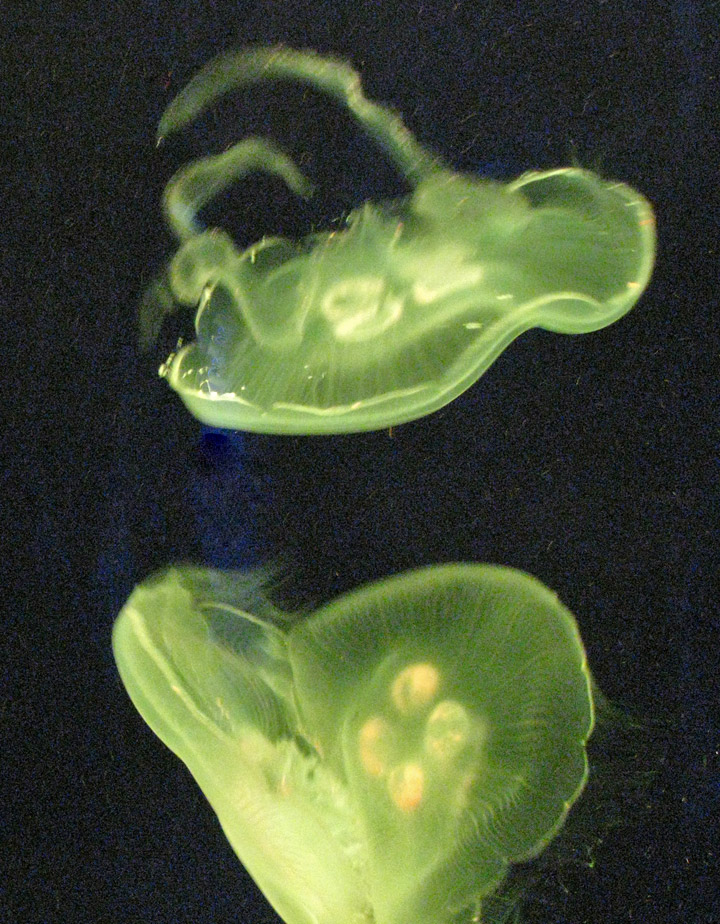 Jellyfish are dioecious; that is, they are either male or female. In most cases, to reproduce, both males and females release sperm or eggs into the surrounding water, where the (unprotected) eggs are fertilized and mature into new organisms. In a few species, the sperm swim into the mouth of the female, allowing the fertilization of the ova within the female's body. Moon jellies use a different process, in which the eggs become lodged in pits on the oral arms, which form a temporary brood chamber to accommodate fertilization and early development. 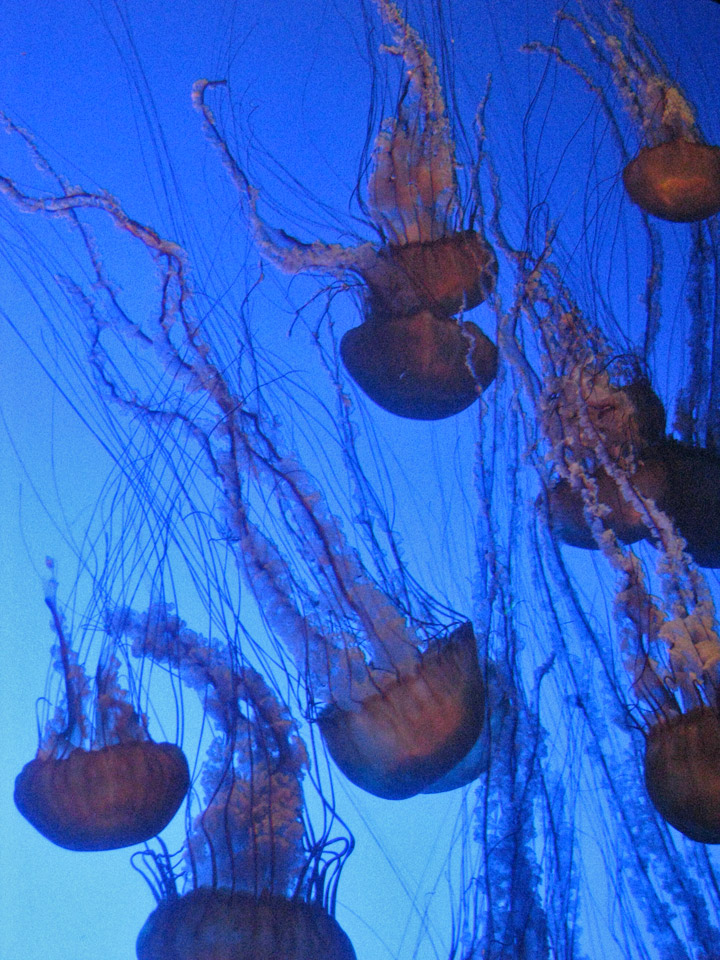 After fertilization and initial growth, a larval form, called the planula, develops from the egg. The planula is a small larva covered with cilia. It settles onto a firm surface and develops into a polyp. The polyp is cup-shaped with tentacles surrounding a single orifice, resembling a tiny sea anemone. After an interval of growth, the polyp begins reproducing sexually by budding and, in the Scyphozoa, is called a segmenting polyp, or a scyphistoma. New scyphistomae may be produced by budding or new, immature jellies called ephyrae may be formed. A few jellyfish species are also capable of producing new medusae by budding directly from the medusan stage; such budding has been described from the tentacle bulbs, the manubrium (above the mouth), or the gonads of hydromedusae (each species bud only from one location). Fission of medksae (splitting in half) has been described for a few of species of hydromedusae. 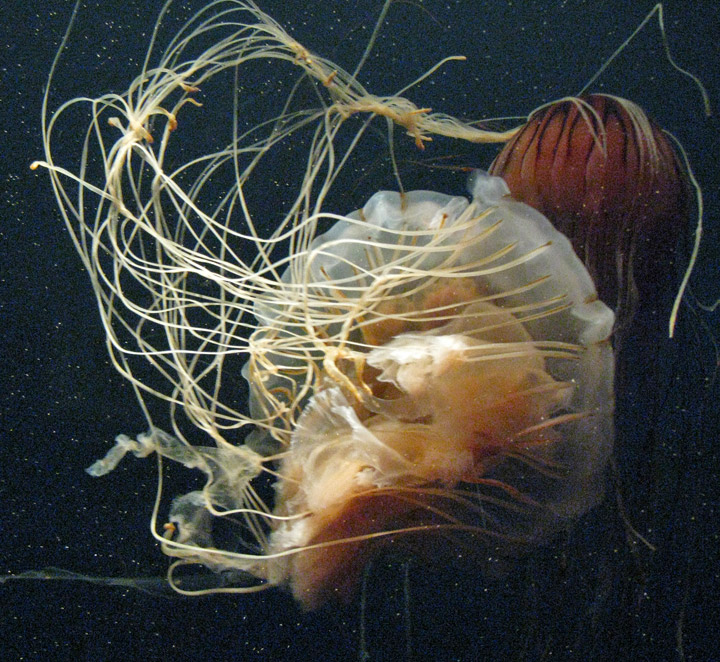 Some of the most common and important jellyfish predators are other species of jellyfish, some of which are specialists in eating jellies. Other predators of jellyfish include tuna, shark, swordfish, and at least one species of Pacific salmon, as well as sea turtles. Sea birds sometimes pick symbiotic crustaceans from the bells of jellyfish near the surface of the sea, inevitably feeding also on the jellyfish hosts of these amphipods or young crabs and shrimp.

Jellyfish lifespans typically range from a few hours (in the case of some very small hydromedusae) to several months. The life span and maximum size of each species is unique. One unusual species is reported to live as long as 30 years and another species, Turritopsis dohrnii as T. nutricula, is said to be effectively immortal because of its ability to transform between medusa and polyp, thereby escaping death. Most of the large coastal jellyfish live about 2 to 6 months, during which they grow from a millimeter or two to many centimeters in diameter. They feed continuously and grow to adult size fairly rapidly. After reaching adult size (which varies by species), jellyfish spawn daily if there is enough food in the ecosystem. In most jellyfish species, spawning is controlled by light, so the entire population spawns at about the same time of day, often at either dusk or dawn.