Grant Park is the oldest city park in Atlanta, Georgia, United States. Fourth in size only to Chastain Park, Freedom Park and Piedmont Park, Grant Park has two major attractions besides the park itself: Zoo Atlanta, established in 1889 and originally known as the Grant Park Zoo; and the Atlanta Cyclorama, a cyclorama featuring the 1864 Battle of Atlanta from the American Civil War. The park serves over two million visitors per year. 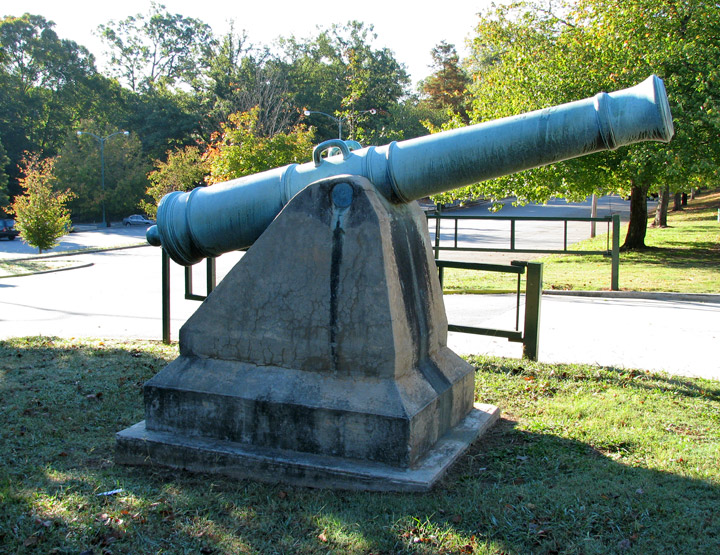 Grant Park was established in 1882 when Lemuel P. Grant, a successful engineer and businessman, gave the city of Atlanta 100 acres (40 hectares) in the newly-developed "suburb" where he lived. In 1890, the city acquired another 44 acres (17.6 hectares) for the park and appointed its first park commissioner, Sidney Root. In 1903, the Olmsted Brothers (sons of Frederick Law Olmsted) were hired to create a plan for the park. The original park included a lake named Lake Abana to handle storm-water runoff. 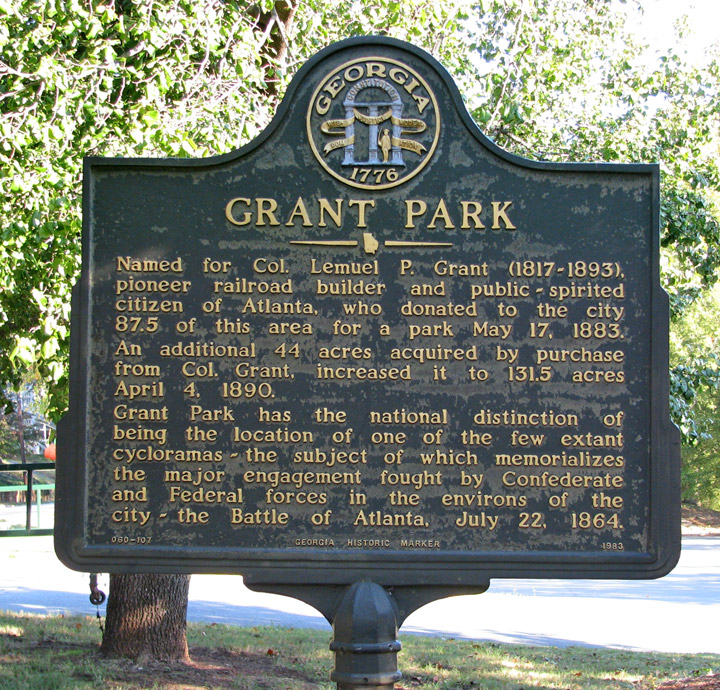 A failed circus gave birth to the eventual Zoo Atlanta when local lumber merchant George Gress purchased animals from the circus and donated them to the city in 1889. The city decided Grant Park was the best location for the zoo and carved space out for the attraction. Later zoo expansions and parking requirements caused the removal of a portion of the lake. In 1892, the circular painting of the Battle of Atlanta was exhibited in the park. The cyclorama would eventually gain its own dedicated building in the park in 1921. 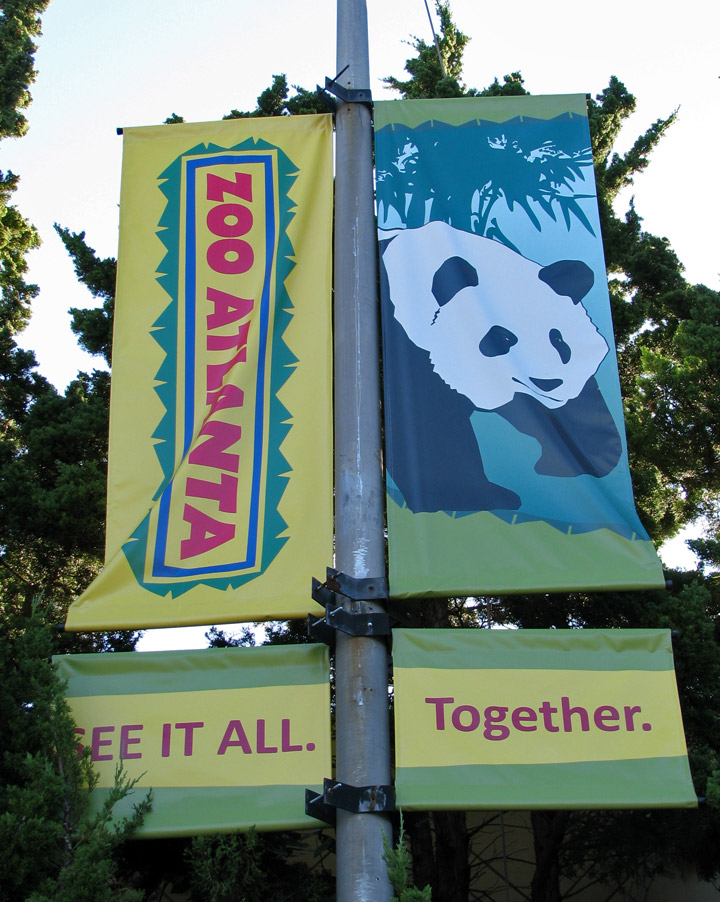 Gateway to the Atlanta Zoo

After years of neglect and abuse, in 1996 the City of Atlanta Parks Bureau commissioned a new master plan for the park. The consultants working on the plan met with a citizen advisory group that would eventually become the Grant Park Conservancy. The Conservancy works to raise funds to enhance and protect the park for the enjoyment of all its visitors. 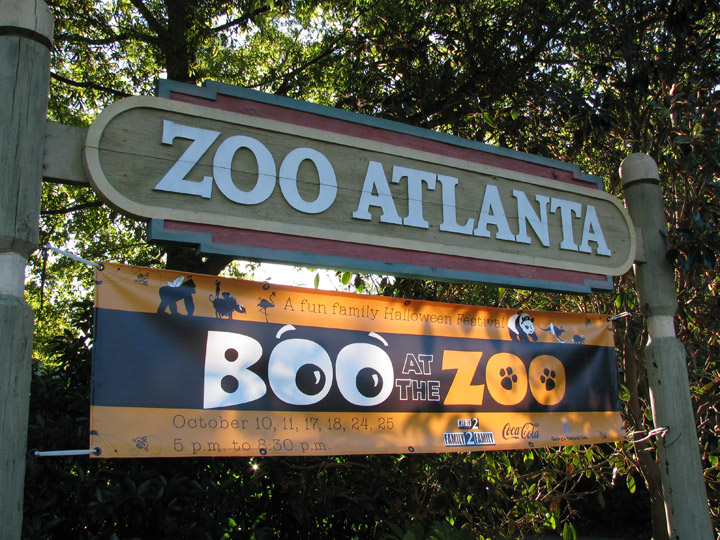 My Photos of the Atlanta Zoo 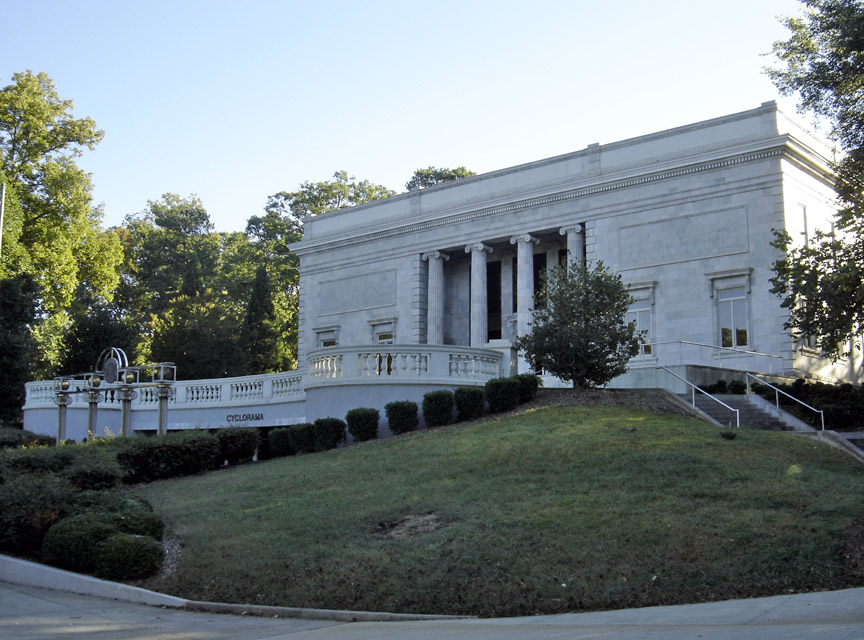 The Atlanta Cyclorama is a cylindrical panoramic painting of the American Civil War Battle of Atlanta. The cyclorama is housed in a museum, also called the "Atlanta Cyclorama", in Grant Park in Atlanta, Georgia. Visitors view the cylindrical painting from the inside, entering through an entrance in the floor. After being seated, the central cylinder rotates slowly affording a view of the entire painting. The painting is one of the largest oil paintings in the world, and if unrolled would measure 42 feet high by 358 feet long.

The painting depicts fierce fighting during the Civil War as Confederate defenders of Atlanta unsuccessfully counterattacked the Union army on July 22, 1864. The painting was commissioned after the end of the war as part of the political campaign of Vice Presidential candidate John A. Logan, who had commanded a large part of the Union forces in the battle. Thus, parts of the painting emphasize the heroism of Logan and other Union commanders. 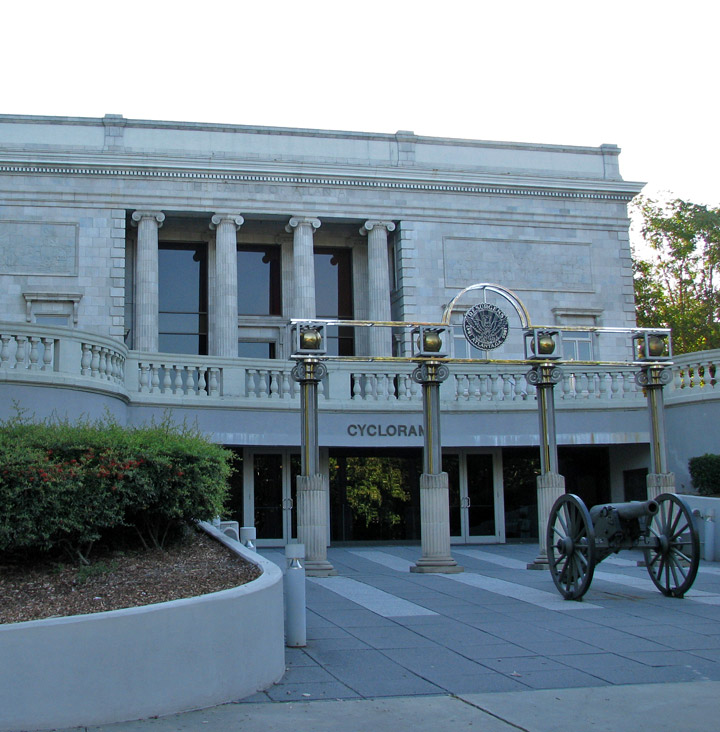 One of several massive cycloramas depicting Civil War battles painted during the 1880s, the Battle of Atlanta painting was created by the American Panorama Company in Milwaukee by a team led by Germans F.W. Heine and August Lohr. They also consulted Civil War artist and witness Theodore Davis, whom they painted into the work. It opened to display in Detroit, Michigan, in 1887.

The painting was sold and ended up in the hands of a traveling circus. When this circus came to Atlanta in the late 1800s, few Atlantans wished to see a Northern-biased painting that glorified the defeat that would lead to the destruction of their city. So, with little attendance, the circus went bankrupt, selling its assets including the painting and the animals. The animals became the founding attraction at Zoo Atlanta and the painting was housed in a wooden structure next to the zoo.

The Cyclorama building was built in 1921 to house the painting. Designed by John Francis Downing, the neoclassical building was built in Grant Park. After a period of neglect, the painting and building were restored in the 1980's.  An adjoining museum displays pictures and artifacts from the Civil War, including the Texas, a steam locomotive that pursued the captured train the General in the Great Locomotive Chase during the war. This raid was depicted in the 1927 Buster Keaton film The General and the 1956 Disney film The Great Locomotive Chase. 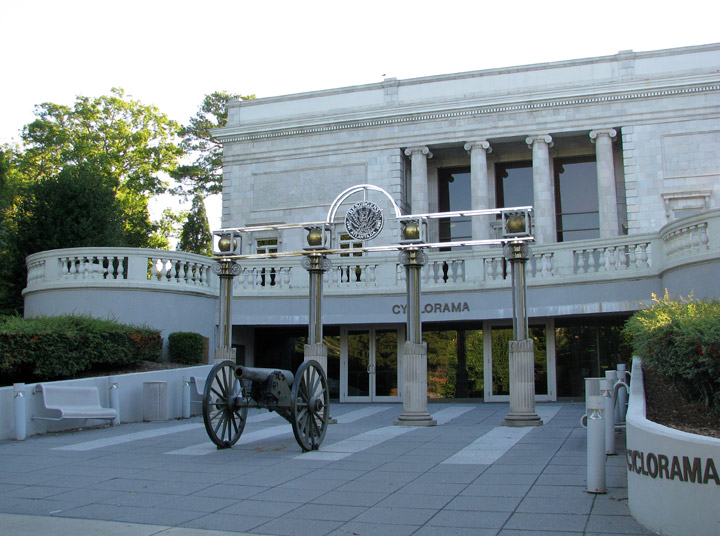 A movie theater inside the museum shows a short film about the Atlanta Campaign, narrated by James Earl Jones, to visitors before they view the painting. The cyclorama painting itself is augmented by a three-dimensional diorama in front of the painting and a narration of the events of the battle and the history of the painting. A popular story concerning the diorama involves actor Clark Gable. During the celebrations surrounding the opening of the film Gone with the Wind, the film's actors visited the Atlanta Cyclorama. Gable allegedly claimed that the only way the painting could be any more magnificent was if he was in it, prompting the management to add Gable's features to one of the sculptures in the diorama, that of a dying soldier.r.

The Cyclorama was narrated at one time by volunteers, some of whom were veterans or widows of veterans of the Civil War. In 1960, Atlanta Mayor William B. Hartsfield accepted the donation of a recorded narration written by Junius Andrew Park, Jr., in honor of his father, Junius Andrew Park, Sr., who was born and raised in Atlanta. Research was done by Lurline Richardson Park, the writer's wife. The narration was musically scored by Atlanta musician Sam T. Wilhoit and the narration was read by Hollywood actor Victor Jory, who appeared in the original motion picture, Gone with the Wind. All parties donated theZoo Carousel 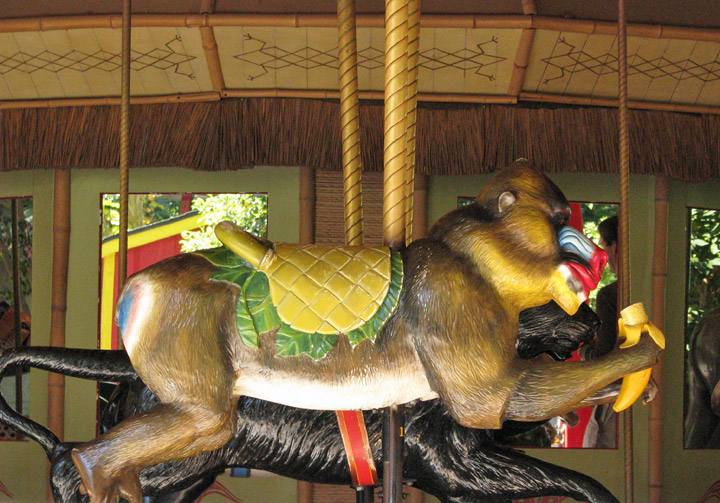 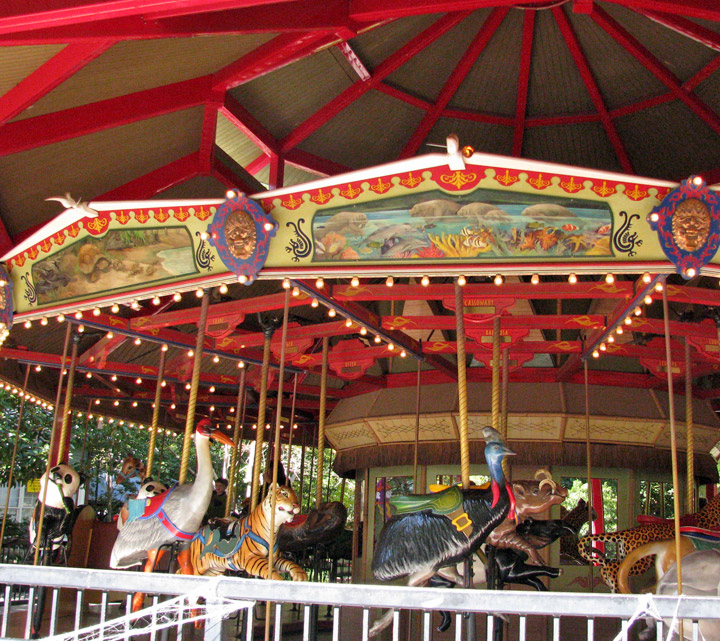 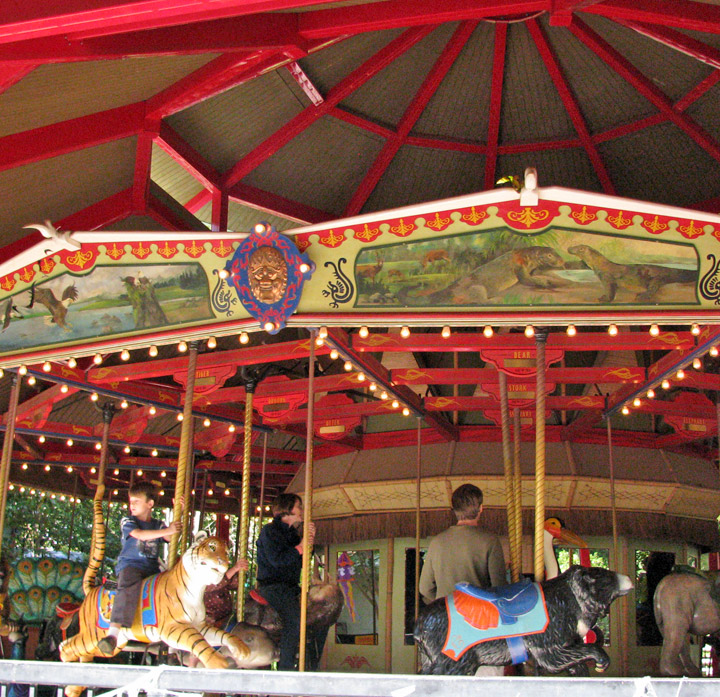 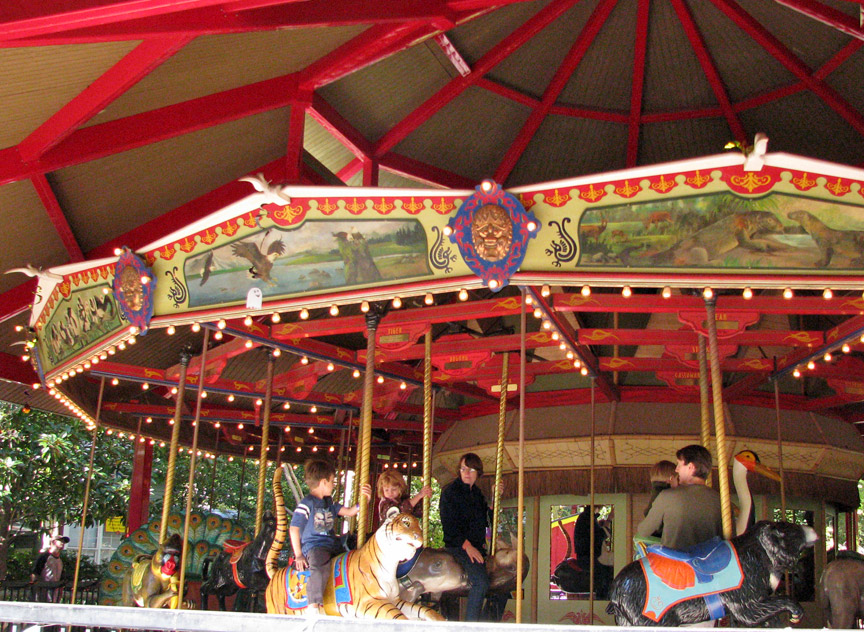 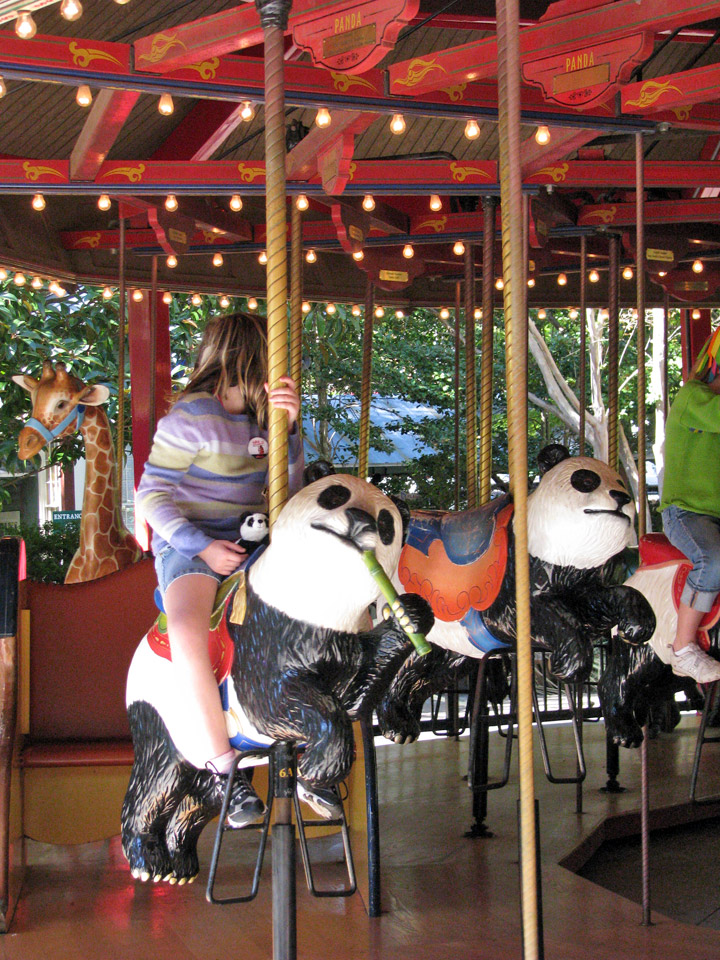 riding the Panda who is eating Bamboo 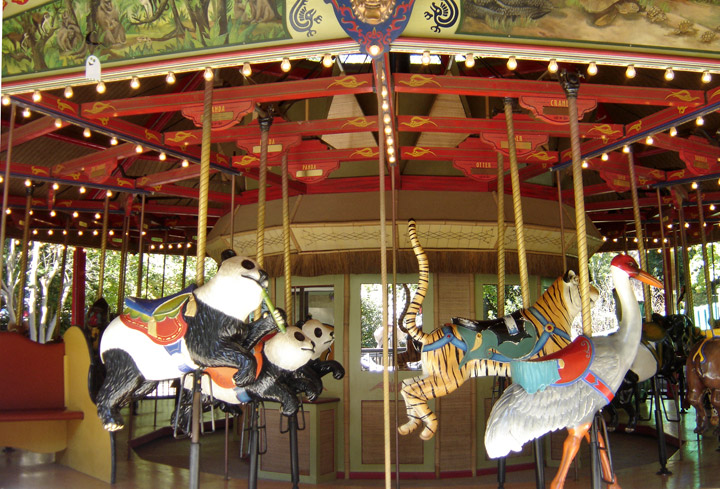 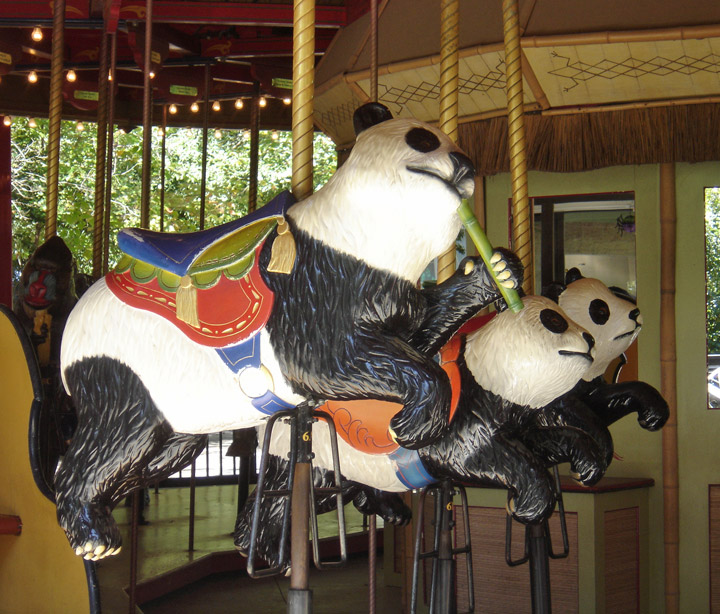 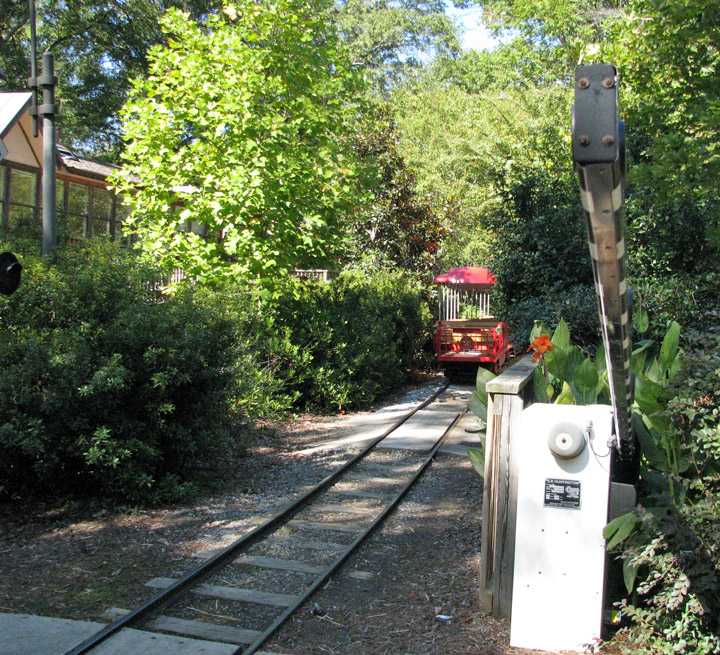 on the train to see the animalsnter">

on the train to see the animals

My Photos of the Atlanta Zoo