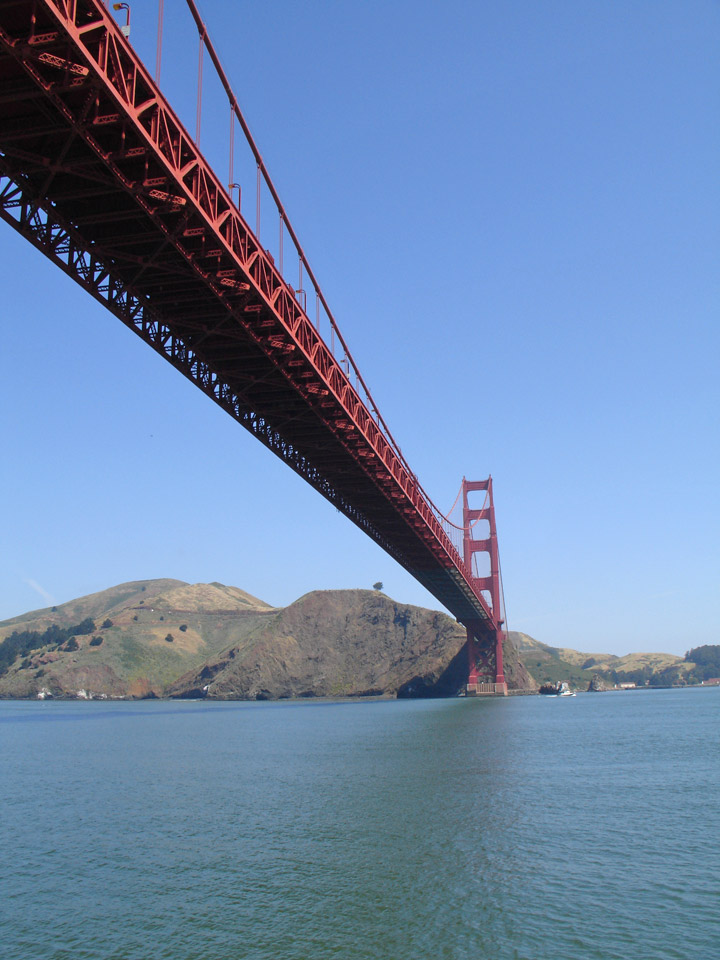 The original plans submitted by Chief Engineer, Joseph B. Strauss, called for a hybrid cantilever and suspension structure across the Golden Gate. This plan was generally regarded as unsightly, and a far cry from the elegant, understated lines that define the Bridge today.

After Strauss submitted his first design, Consulting Engineer, Leon S. Moisseiff, theorized that a long span suspension bridge could cross the Gate. A suspension structure of this length had never been tried before.

Even after Moisseiff and Strauss began to refine the new design, it wasn't until Consulting Architects, Irving F. Morrow and his wife, Gertrude C. Morrow, joined the project that the art deco styling began to take shape. 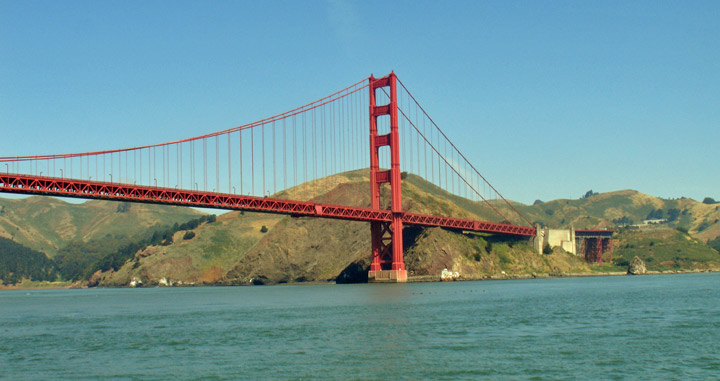 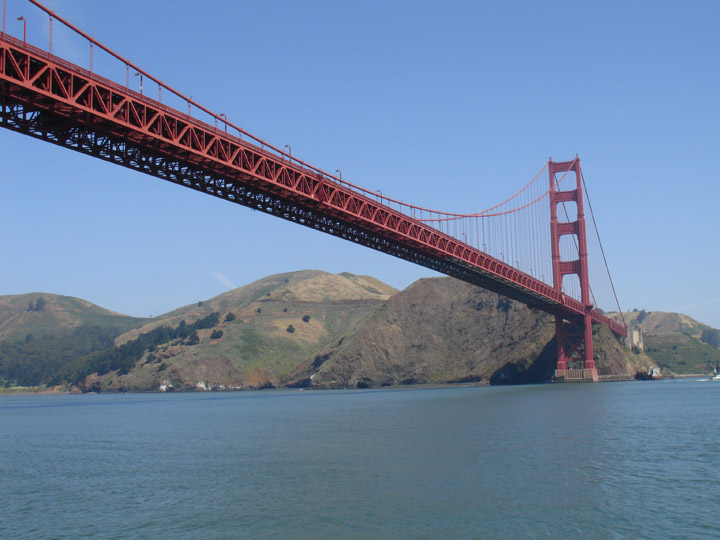 The light posts took on a lean, angled form. Wide, vertical ribbing was added on the horizontal tower bracing to accent the sun's light on the structure. The rectangular tower portals themselves decrease on ascent, further emphasizing the tower height. 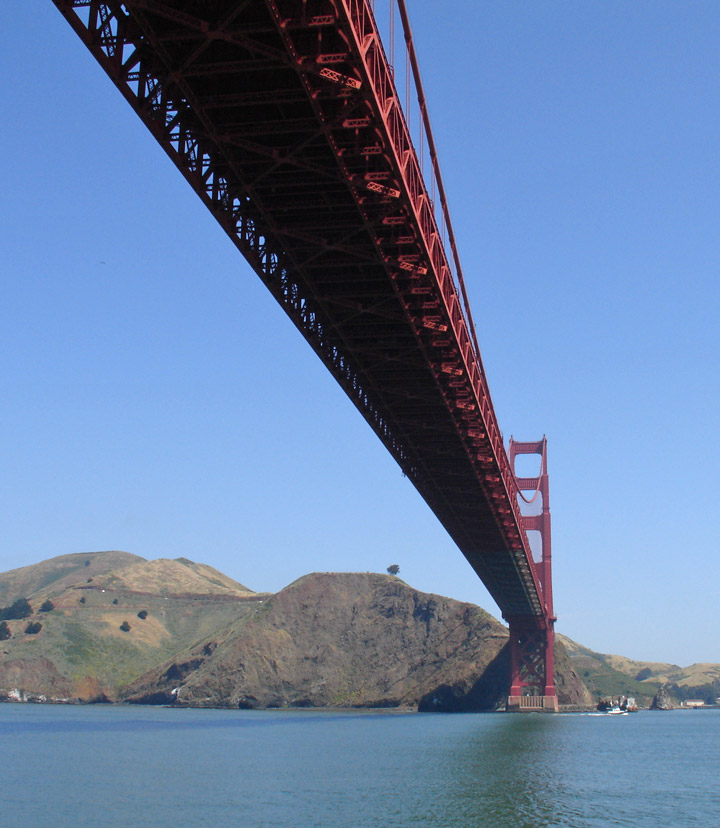 These architectural enhancements define the Golden Gate Bridge's art deco form. it is this form which is known and admired the world over. 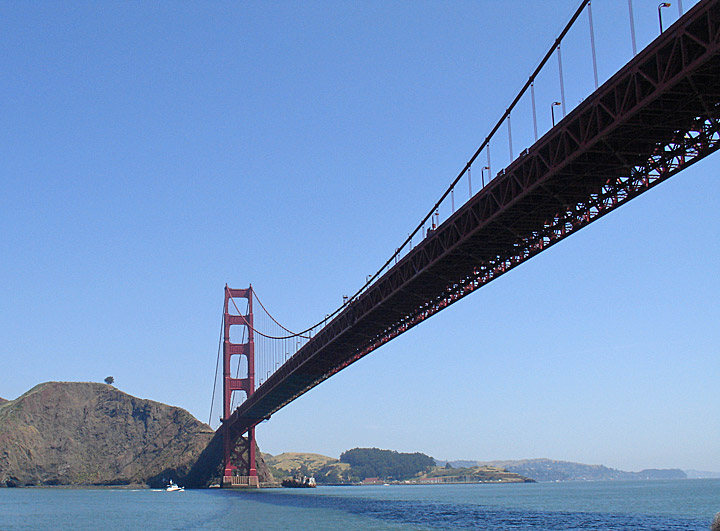 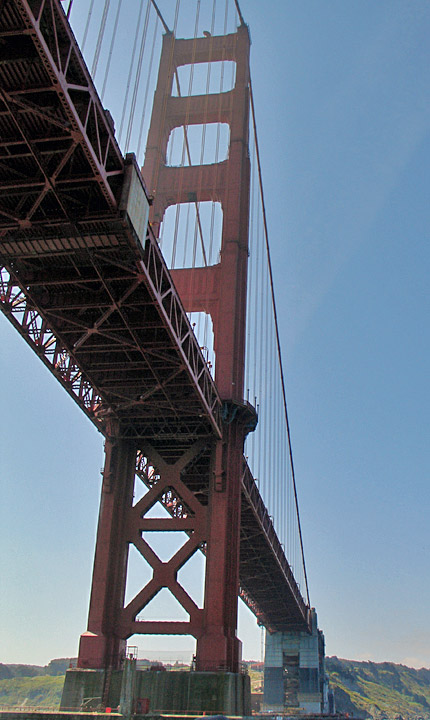 The Golden Gate Bridge has always been painted orange vermilion, deemed "International Orange." Rejecting carbon black and steel gray, Morrow selected the color because it blends well with the span's natural setting. If the U.S. Navy had its way, the Bridge might have been painted black with yellow stripes to assure greater visibility for passing ships. 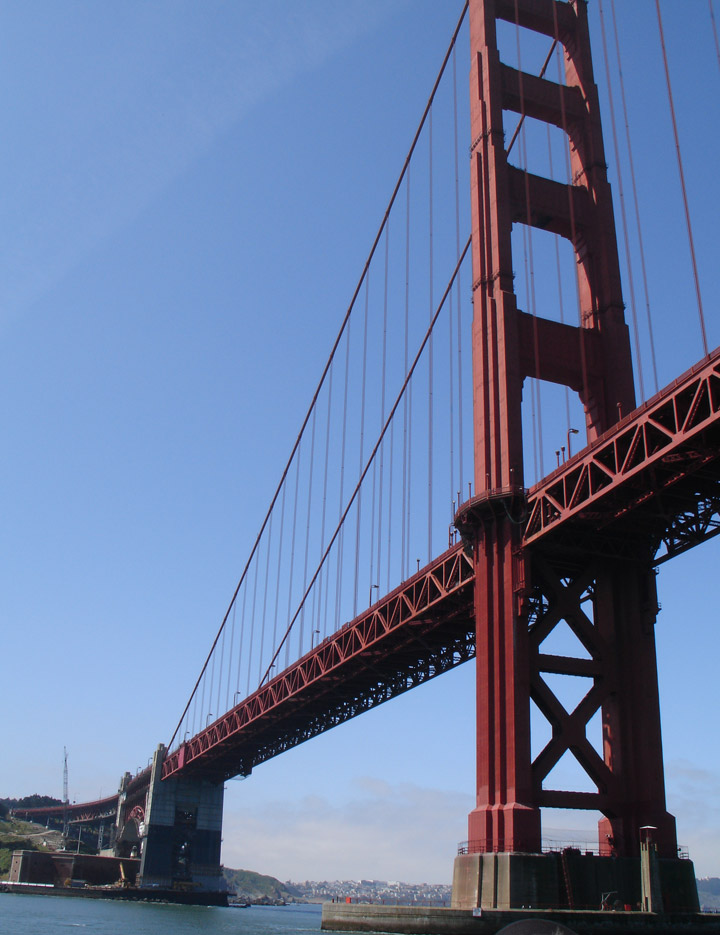 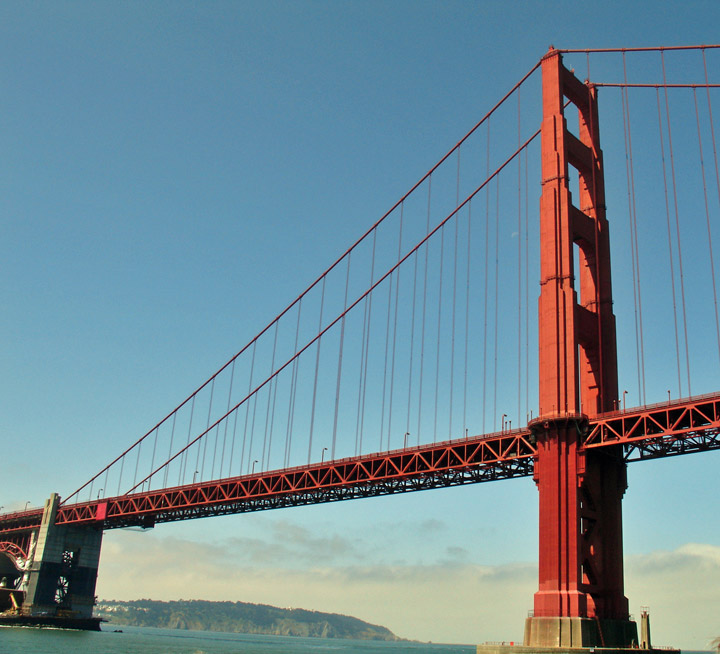 Painting the Bridge is an ongoing task and the primary maintenance job. The Bridge paint protects it from the high salt content in the air, which rusts and corrodes the steel components. Many misconceptions exist about how often the Bridge is painted. Some say once every seven years, others say from end to end each year. Actually, the Bridge was painted when it was originally built with a red lead primer and a lead-based topcoat. 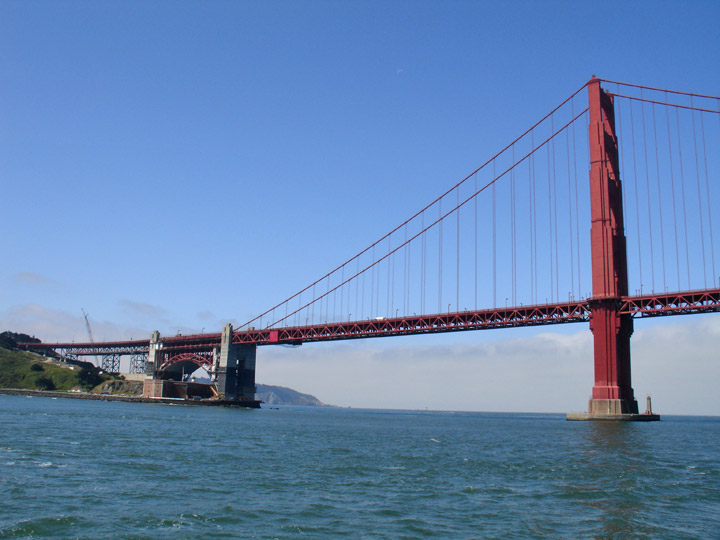 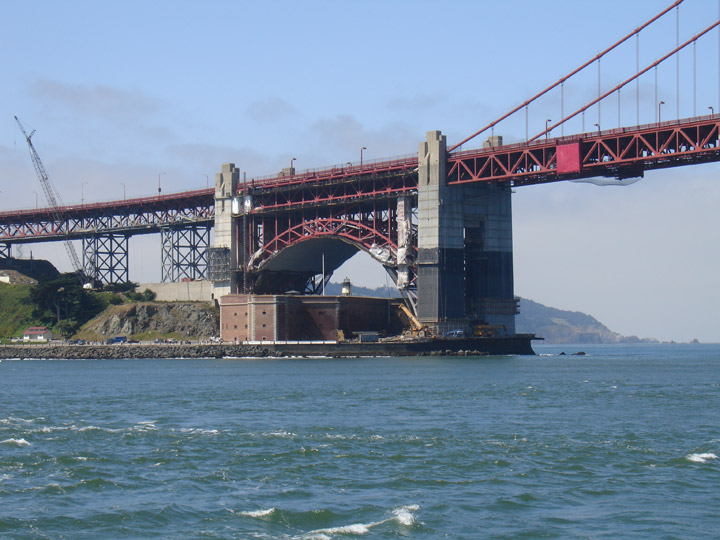 Fort Point at the base of the The Golden Gate bridge

For the next 27 years, only touch up was required. By 1968, advancing corrosion sparked a program to remove the original paint and replace it with an inorganic zinc silicate primer and vinyl topcoats. The topcoat was changed to acrylic emulsion in 1990 to meet air quality requirements. The original program was completed in 1995 with continuous touch up on areas with the most severe erosion. 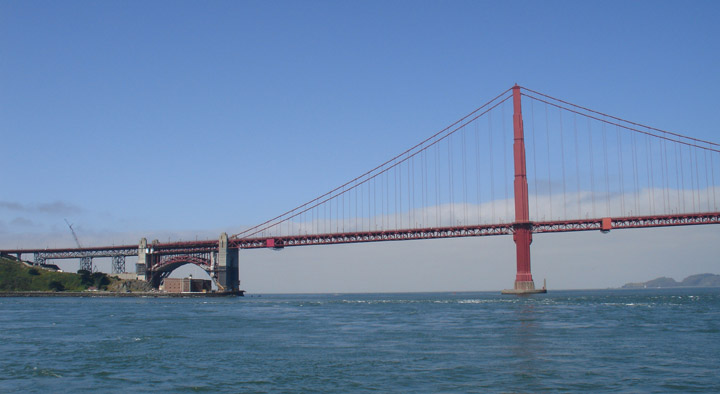 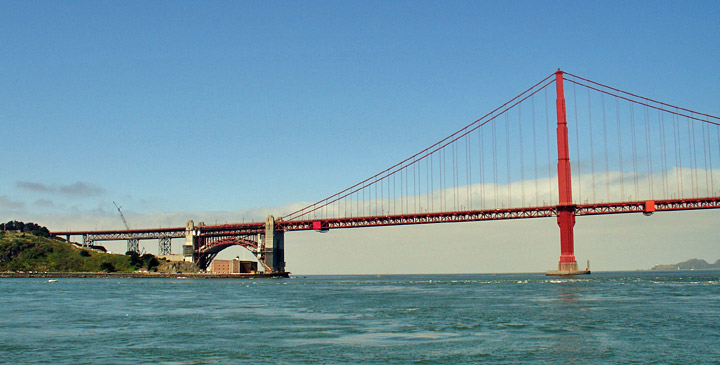 Many people ask how to obtain International Orange Paint - it easy-your paint store can mix it with the following information:

Fort Point was constructed by the U.S. Army Corps of Engineers between 1853 and 1861 to prevent entrance of a hostile fleet into San Francisco Bay.

The fort was designed to mount 126 massive cannon. Rushed to completion at the beginning of the Civil War, Fort Point was first garrisoned in February of 1861 by Company I, 3rd U.S. Artillery Regiment. The fort was occupied throughout the Civil War, but the advent of faster, more powerful rifled cannon made brick forts such as Fort Point obsolete. In 1886 the troops were withdrawn, and the last cannon were removed about 1900. The fort was then used for storage and training purposes for many years.

Between 1933 and 1937 the fort was used as a base of operations for the construction of the Golden Gate Bridge. During World War II, Fort Point was occupied by about 100 soldiers who manned searchlights and rapid-fire cannon mounted atop the fort as part of the protection of a submarine net strung across the entrance to the Bay.

Fort Point is the only third system brick fort on the west coast of the United States.
It became a National Historic Site on October 16th, 1970. 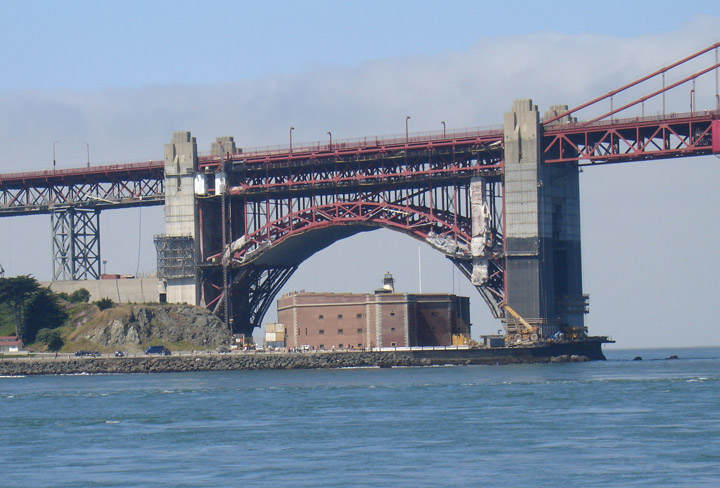 Fort Point at the foot of the Golden Gate bridge