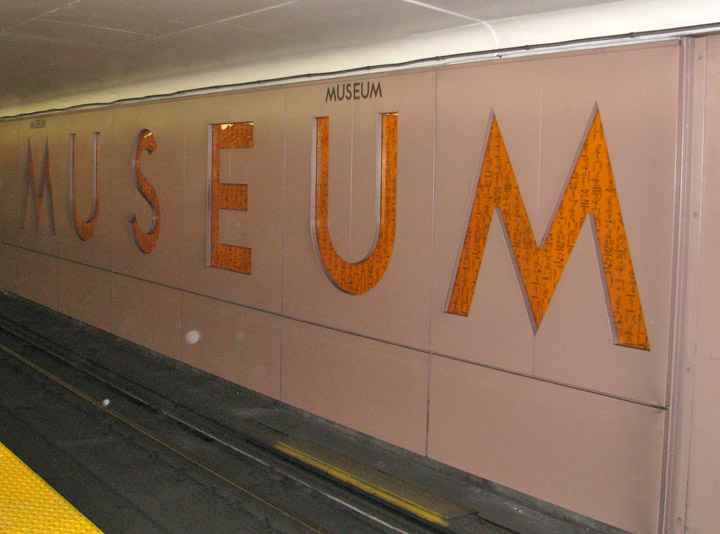 at the Museum stop on the subway

The Royal Ontario Museum, commonly known as the ROM, is a major museum for world culture and natural history in the city of Toronto, Ontario, Canada. The ROM is the fifth largest museum in North America, containing more than six million items and over 40 galleries. It is also the largest museum in Canada. It has notable collections of dinosaurs, Near Eastern and African art, East Asian art, European history, and Canadian history. 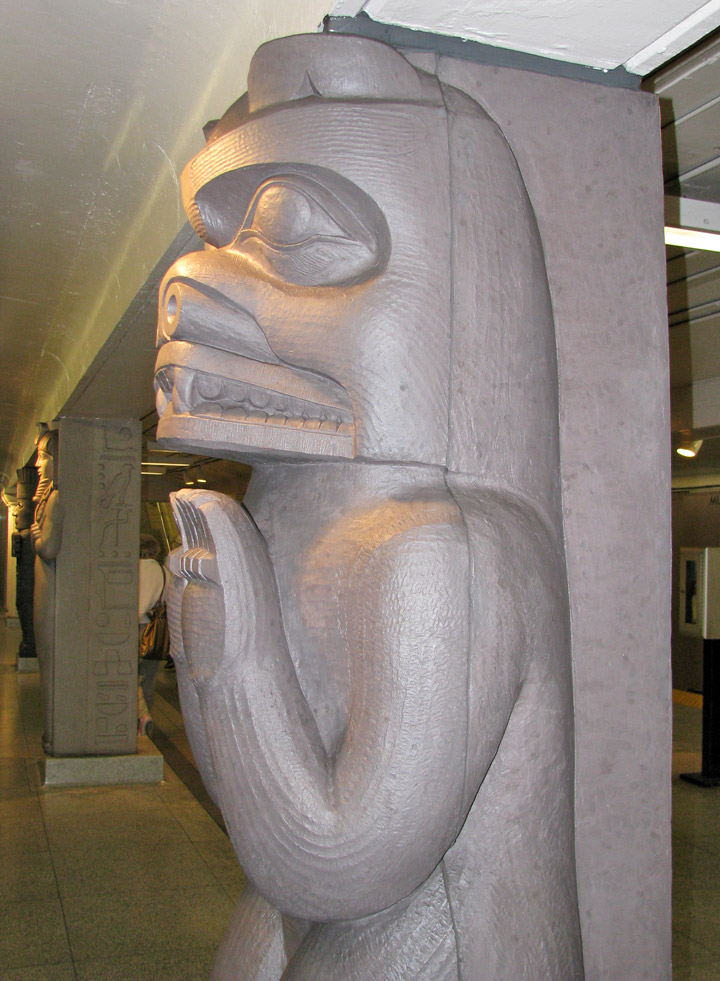 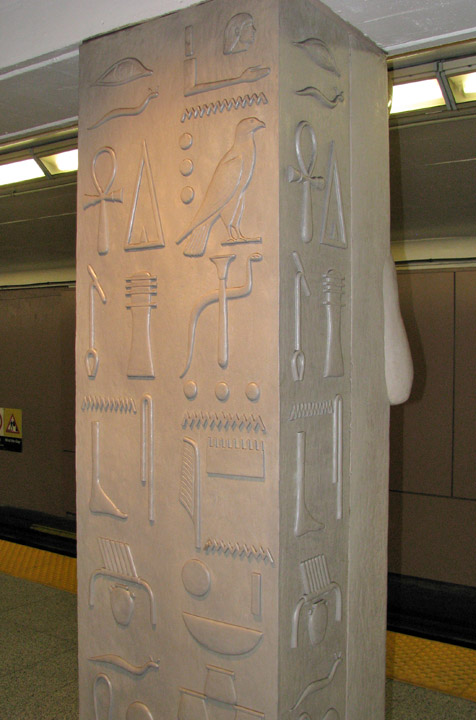 The museum is located at the corner of Bloor Street and Avenue Road, north of Queen's Park and on the east side of Philosopher's Walk in the University of Toronto. Established as the Museum of Natural History and Fine Arts in 1857 at the Toronto Normal School, the museum's current incarnation began in 1912 with the enactment of the Royal Ontario Museum Act by the provincial government. Operated by the University of Toronto until 1968, the museum is now an independent institution but still maintains close relations with the university, often sharing expertise and resources. 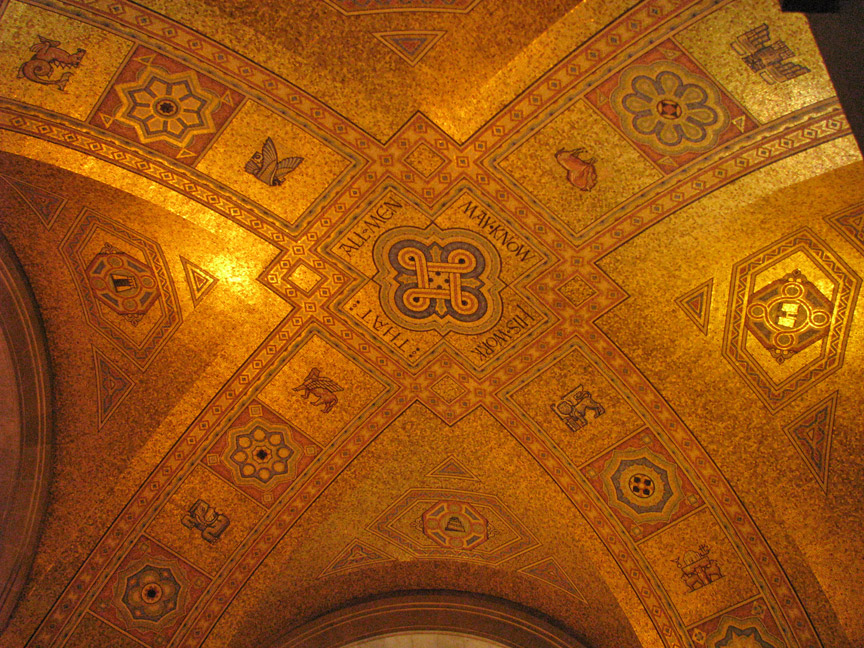 The mosaic ceiling of the rotunda entrance to the Royal Ontario Museum. The middle of the dome reads, "That all men may know His work." 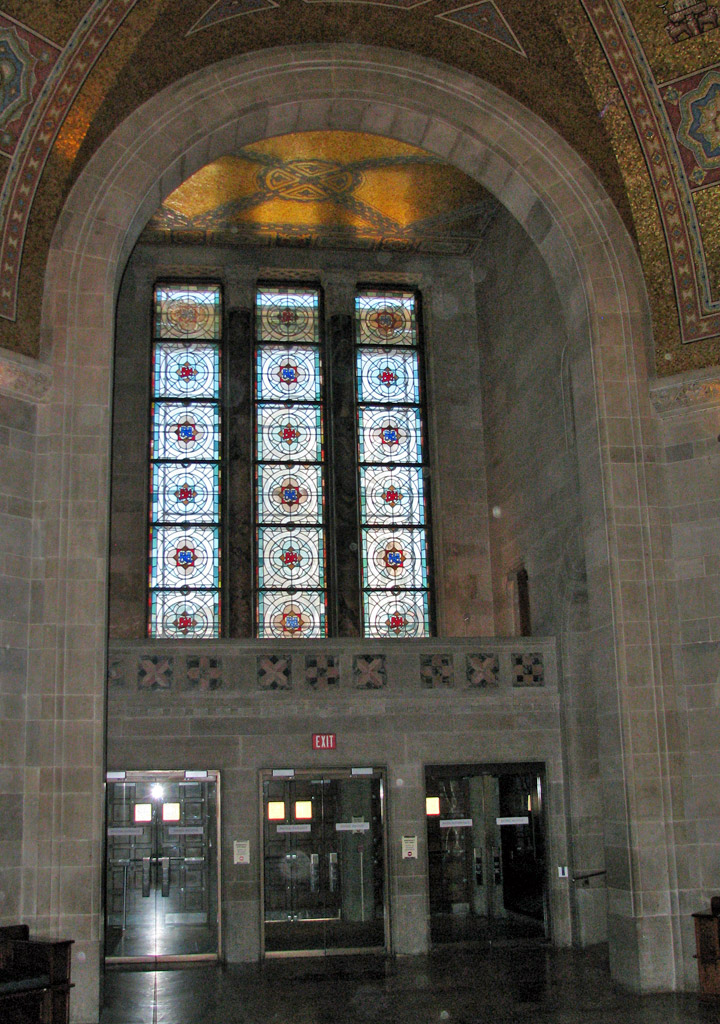 Opened at 3:00 on March 14, 1914 by HRH The Duke of Connaught, Governor General of Canada, the museum's original building was designed by Toronto architects Frank Darling and John A. Pearson. The architectural style is Italianate Neo-Romanesque, popular throughout North America until the 1870s. The structure is heavily massed and punctuated by rounded and segmented arched windows with heavy surrounds and hood moldings. Other features include applied decorative eave brackets, quoins and cornices. 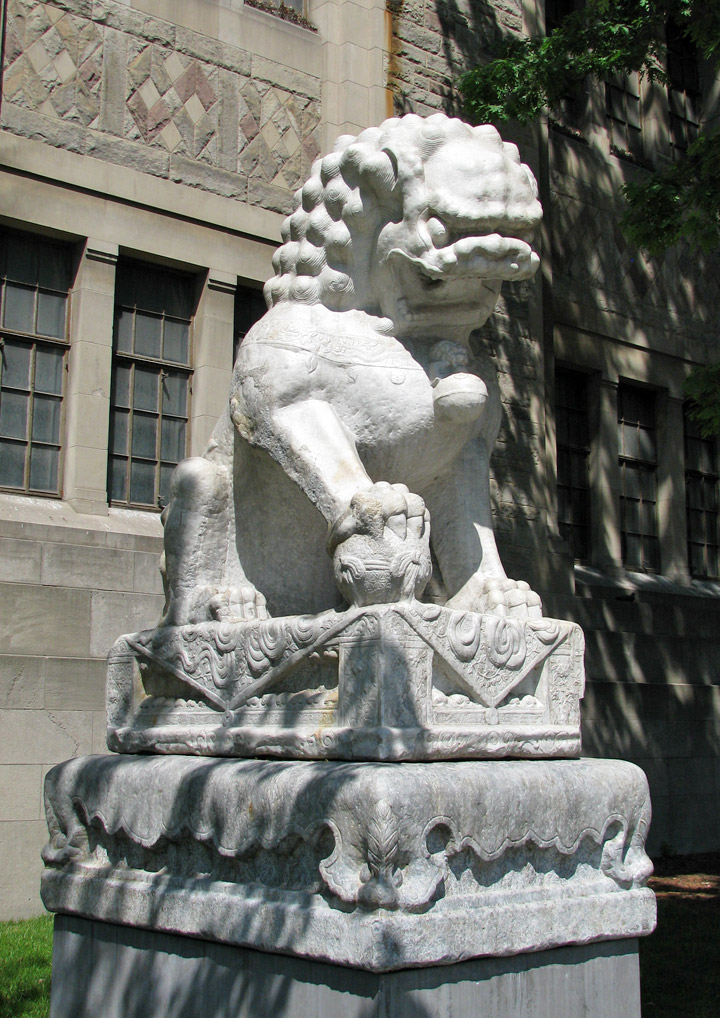 When the museum's site was first chosen, it was still at the edge of Toronto's built-up area and far from the city's business district. The location was selected mainly for its proximity to the University of Toronto. The original building was constructed on the western edge of the property along the university's Philosopher's Walk, with its entrance opening on Bloor Street. It was the first phase of a two-part master plan which was to see the museum eventually expanded towards Queen's Park Crescent as an 'H' shaped building. 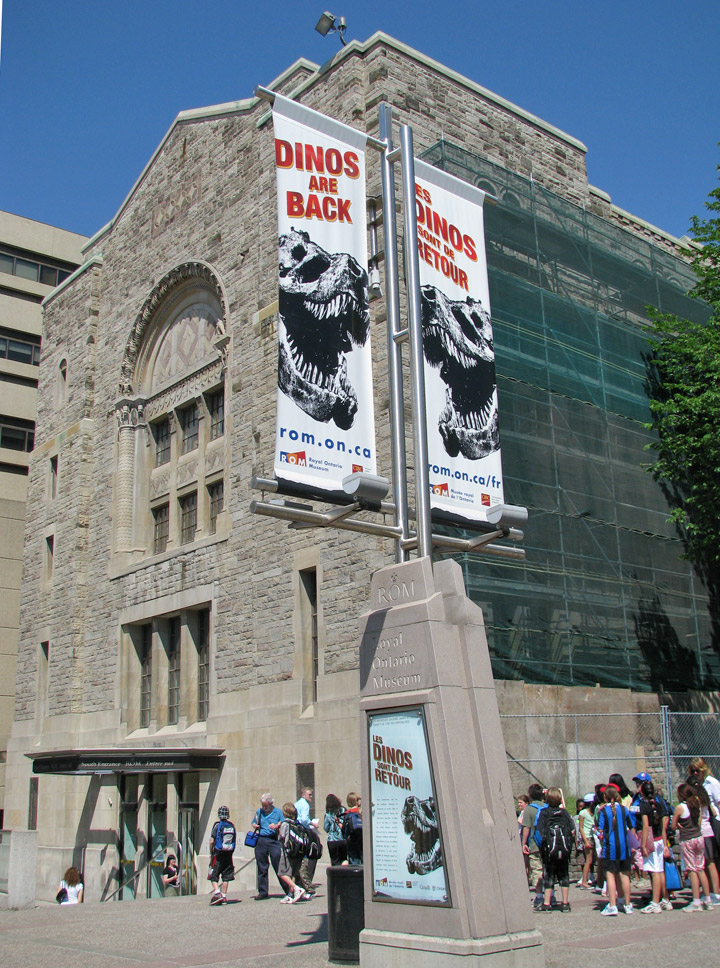 East-facing façade of the Royal Ontario Museum, built in 1933. 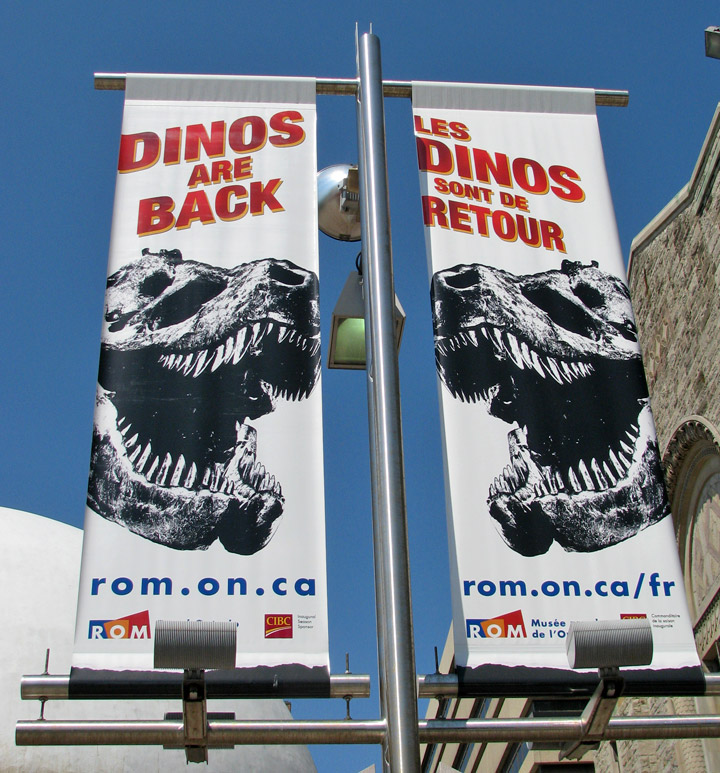 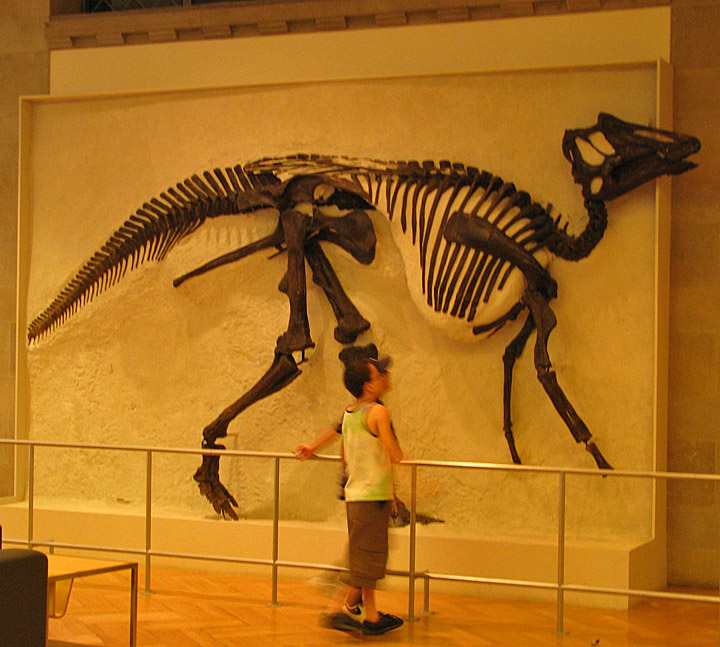 The ROM's first expansion saw the construction of the wing fronting onto Queen's Park. Opened on October 12, 1933, it included the museum's elaborate art deco, Byzantine-inspired rotunda and a new main entrance. To employ as many men as possible during the Great Depression, the excavation for the basements and foundations were undertaken by hand, with teams of workers working alternate weeks. The new wing was designed by Alfred H. Chapman and James Oxley, and required the demolition of Argyle House, a Victorian mansion at 100 Queen's Park. 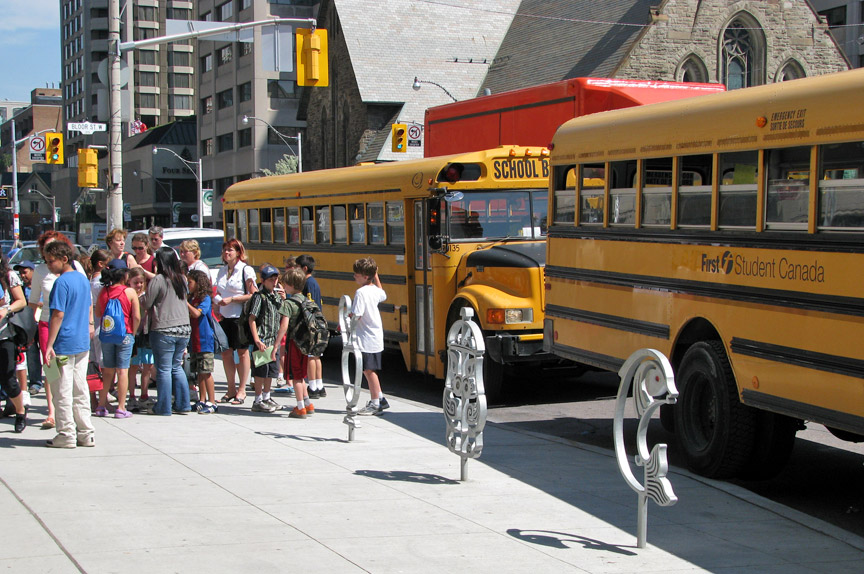 The linking wing and rear (west) façade of the Queen's Park wing were originally done in the same yellow brick as the 1914 building, with minor Italianate detailing. However, the Queen's Park facade of the expansion broke from the heavy Italianate style of the original structure. It was built in a neo-Byzantine style with rusticated stone, triple windows contained within recessed arches, and different-colored stone arranged into a variety of patterns. This development from the Roman-inspired Italianate to a Byzantine influenced style reflected the historical development of Byzantine architecture from Roman architecture. Common among neo-Byzantine buildings in North America, the facade also contains elements of Gothic Revival in its relief carvings, gargoyles and statues. The ornate ceiling of the rotunda is covered predominantly in gold back-painted glass mosaic tiles, with colored mosaic geometric patterns and images of real and mythical animals. 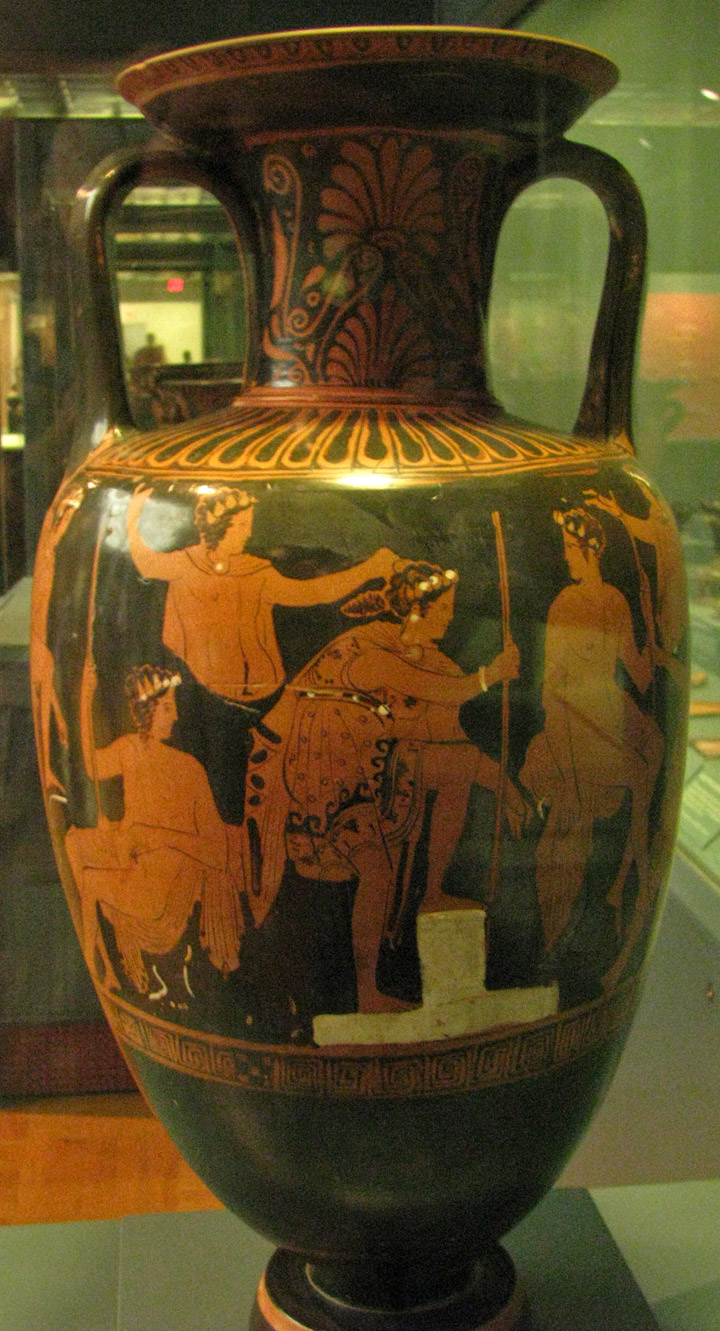 More Photos from the Egypt and Greek collection

Writing in the Journal of the Royal Architectural Institute of Canada in 1933, A. S. Mathers said of the expansion: "The interior of the building is a surprise and a pleasant one; the somewhat complicated ornament of the façade is forgotten and a plan on the grand manner unfolds itself. It is simple, direct and big in scale. One is convinced that the early Beaux Arts training of the designer has not been in vain. The outstanding feature of the interior is the glass mosaic ceiling of the entrance rotunda. It is executed in colors and gold, and strikes a fine note in the one part of the building which the architect could decorate without conflicting with the exhibits." 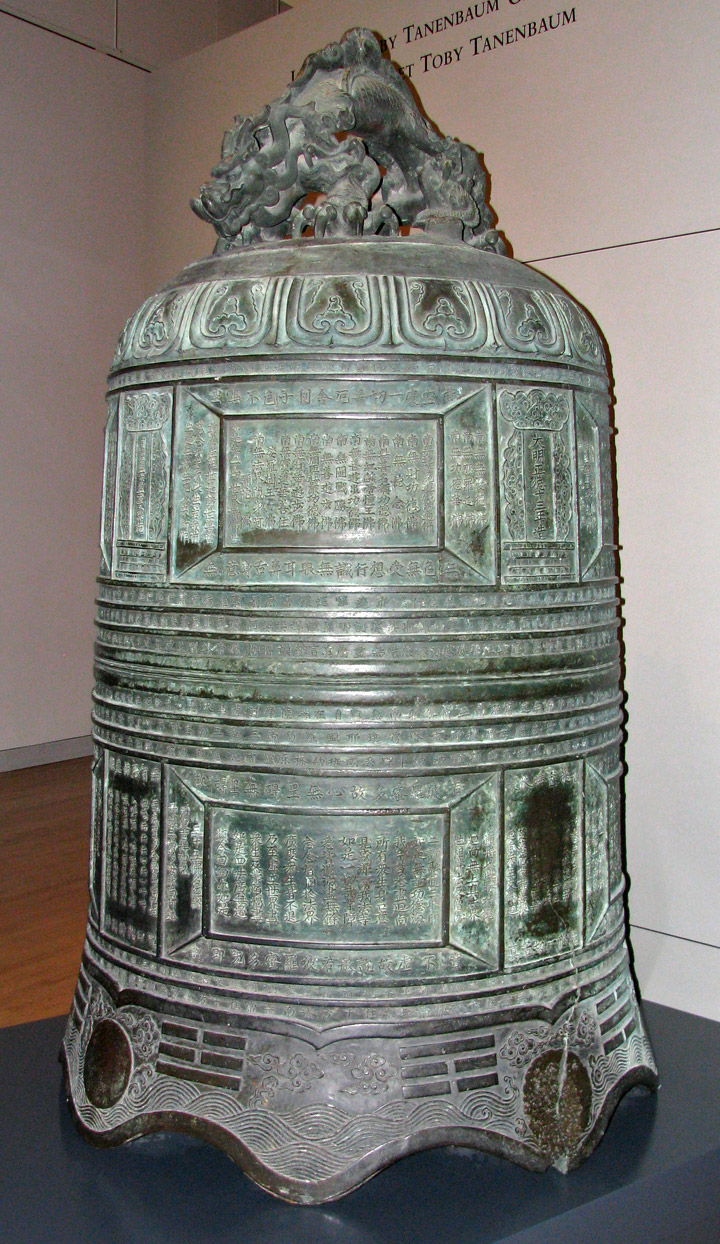 More Photos from the Asia collection

The original building and the 1933 expansion have been listed as heritage buildings of Toronto since 1973. 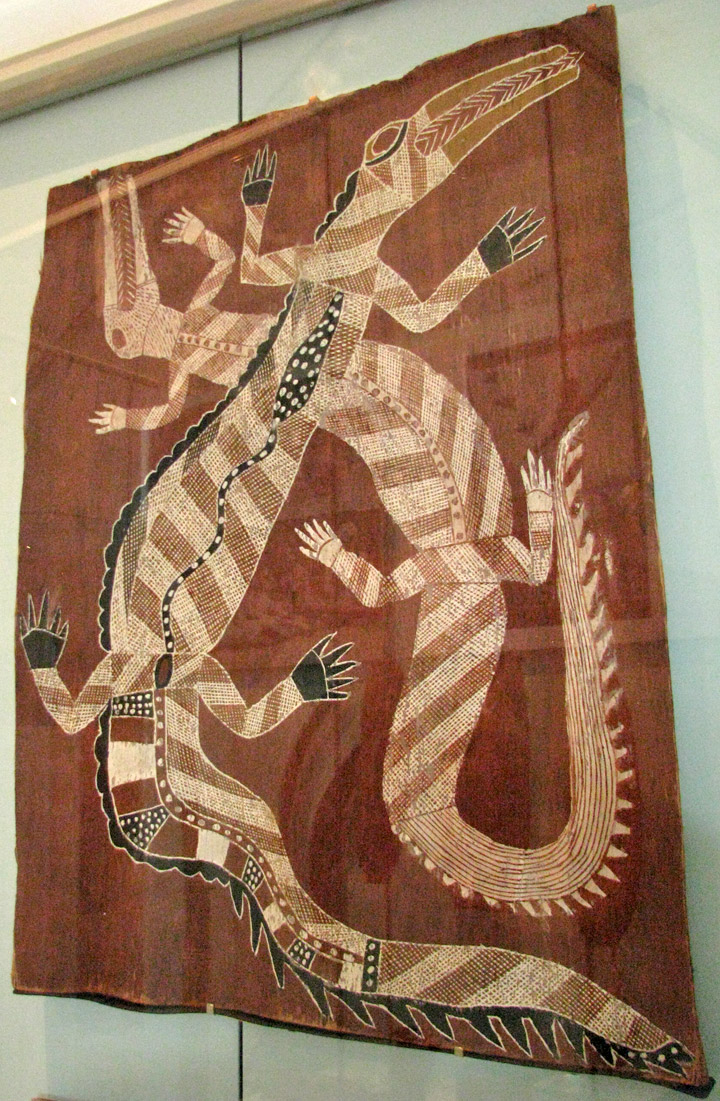 More Photos from the Pacific collection

The second major addition was the Queen Elizabeth II Terrace Galleries on the north side of the building, and a curatorial centre built on the south, which were started in 1978, completed in 1984, and designed by Toronto architect Gene Kinoshita, with Mathers & Haldenby. 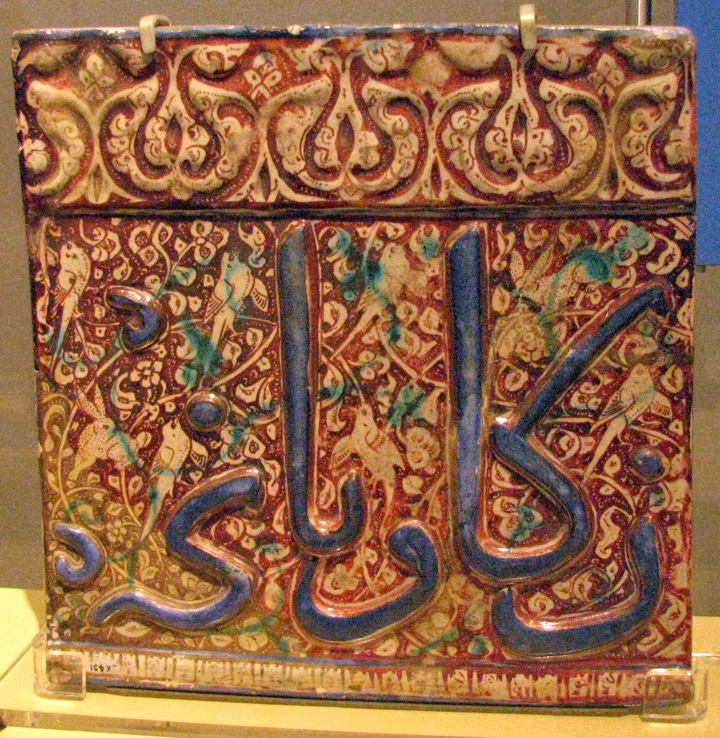 The new construction meant that a former outdoor "Chinese Garden" to the north of the building facing Bloor, along with an adjoining indoor restaurant, had to be dismantled. 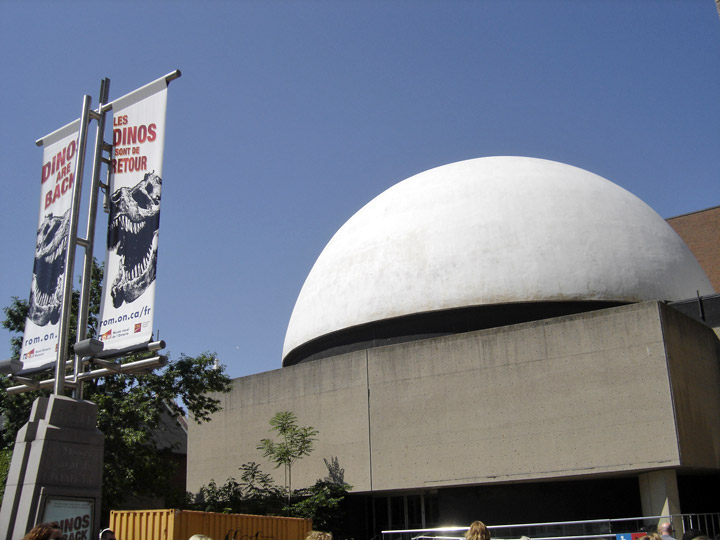 planetarium which was closed in 1995

In 1964, the McLaughlin Planetarium was added to the south, and a multi-level atrium was added in 1975, doubling the floor space. The planetarium was closed in 1995, then re-opened temporarily from 1998 to 2002, when the second floor space was rented to the Children's Own Museum. In late 2002, it housed the traveling The Lord of the Rings: The Two Towers Exhibition. It is now used primarily as office space and storage. 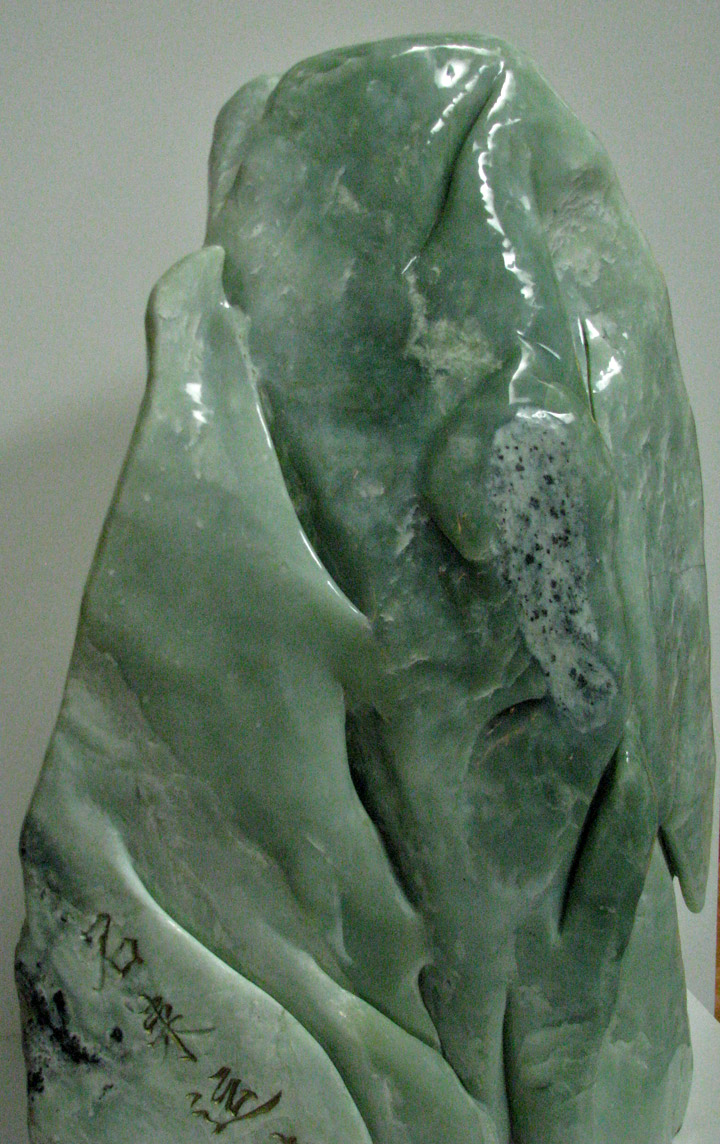 Opened in 1984 by Elizabeth II, a $55 million expansion was built in a simple modernist style of poured concrete, glass, and pre-cast concrete and aggregate panels. It took the form of layered volumes, each rising layer stepping back from Bloor Street, hence creating a layered terrace effect. Though the design of this expansion won a Governor General's Award in Architecture, this last set of galleries was torn down in 2004 in favor of a new expansion designed by architect Daniel Libeskind. 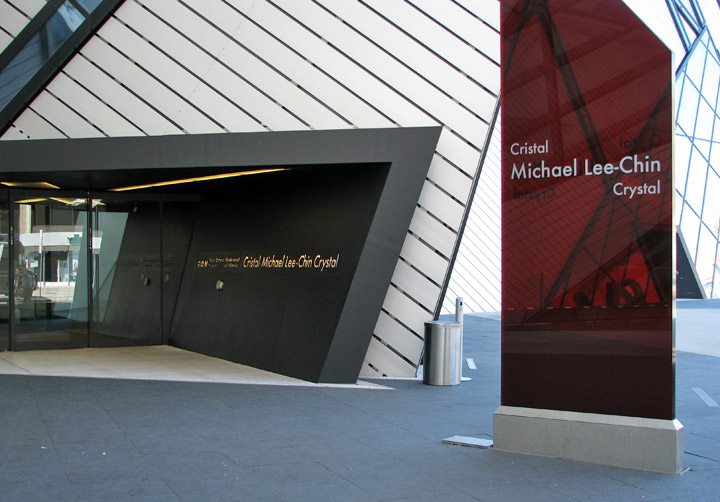 The museum is currently undergoing a major renovation and expansion project, dubbed Renaissance ROM. The centerpiece is the recently-opened Michael Lee-Chin Crystal, designed by architect Daniel Libeskind and Bregman + Hamann Architects; installation of exhibits in the addition will continue over a period of months. Existing galleries and buildings are also being modified. Renovated galleries in the historic buildings will reopen in stages, and all work is scheduled to be completed by 2010. The final cost of the project will be $270 million CAD. 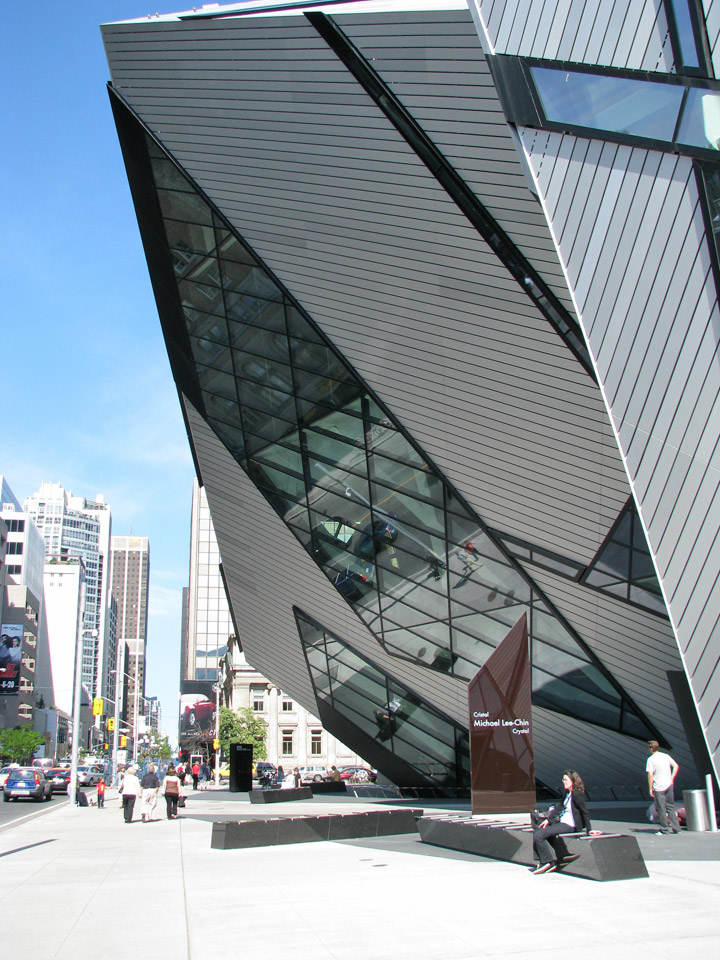 The Libeskind design, selected from among 50 entrants in an international competition, saw the award winning Terrace Galleries torn down and replaced with a Deconstructivist crystalline-form clad in 25 percent glass and 75 percent aluminum. The building is named after Michael Lee-Chin, who donated $30 million towards its construction. It houses the new main entrance to the museum, a gift shop, a restaurant (C5 Restaurant and Lounge), a cafeteria (Food Studio), seven additional galleries and Canada's largest temporary exhibition hall in the lower level. 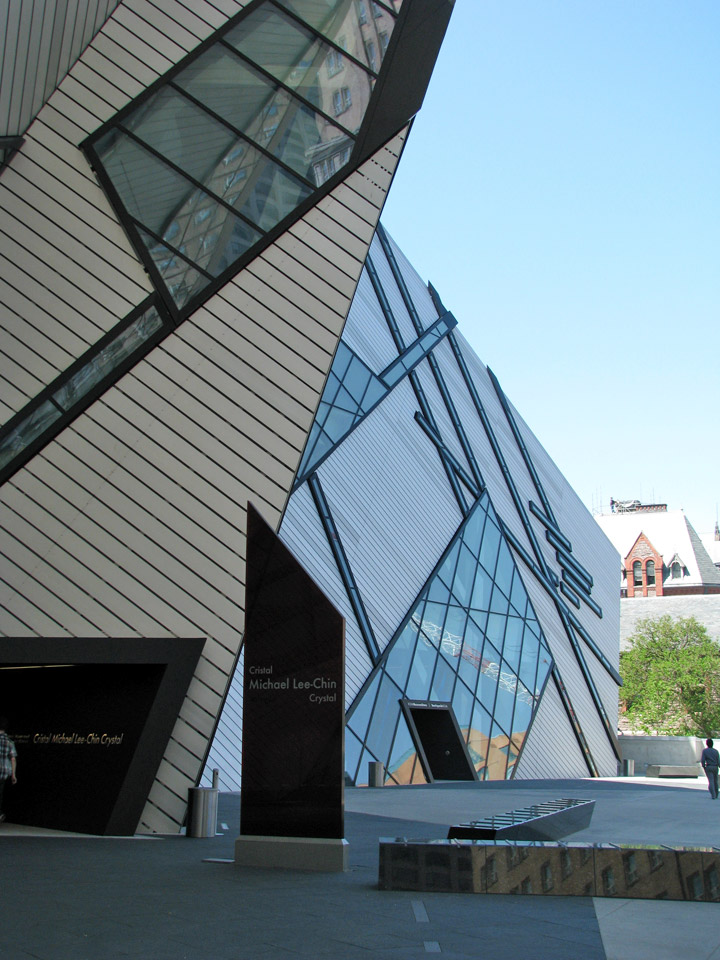 The Crystal's canted walls do not touch the sides of the existing heritage buildings, save for where pedestrian crossing occurs and to close the envelope between the new form and the existing walls. Although designed to conform to existing height restrictions and maintain sight lines along Bloor Street, the Crystal, at certain points, cantilevers over the setback and into the street allowance. 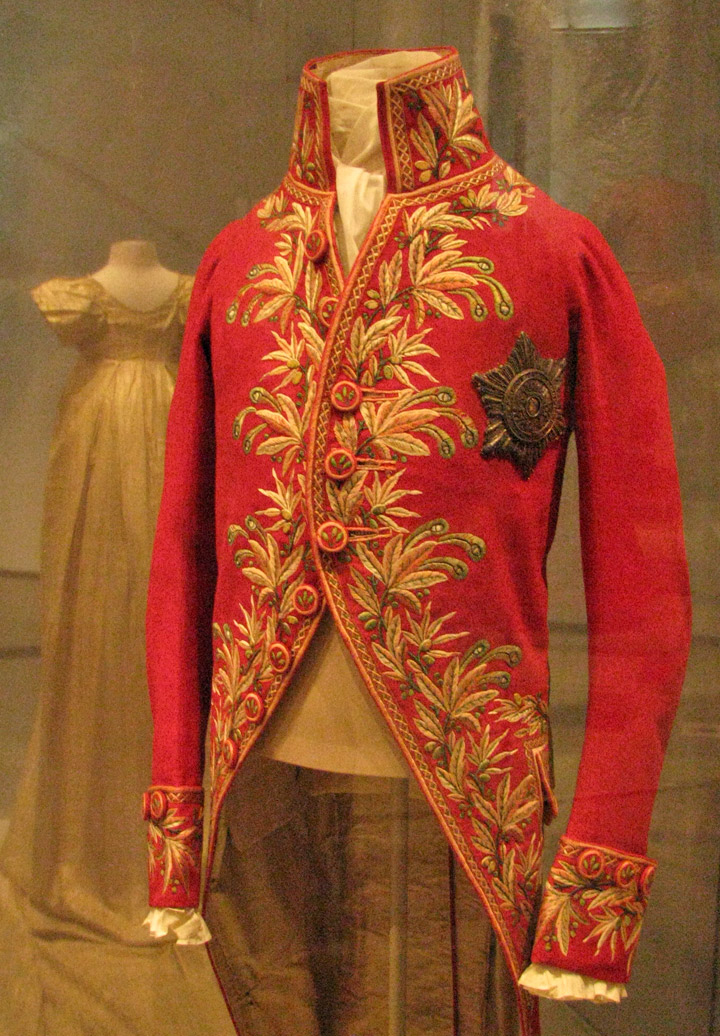 The building's design is similar to some of Libeskind's other works, notably the Jewish Museum in Berlin, the London Metropolitan University Graduate Centre, and the Fredric C. Hamilton Building at the Denver Art Museum. The steel framework was manufactured and assembled by Walters Inc. of Hamilton, Ontario. The extruded anodized aluminium cladding was fabricated by Josef Gartner in Germany, the only company in the world that can produce the material. The company also provided the titanium cladding for Frank Gehry's Guggenheim Museum in Bilbao, Spain. 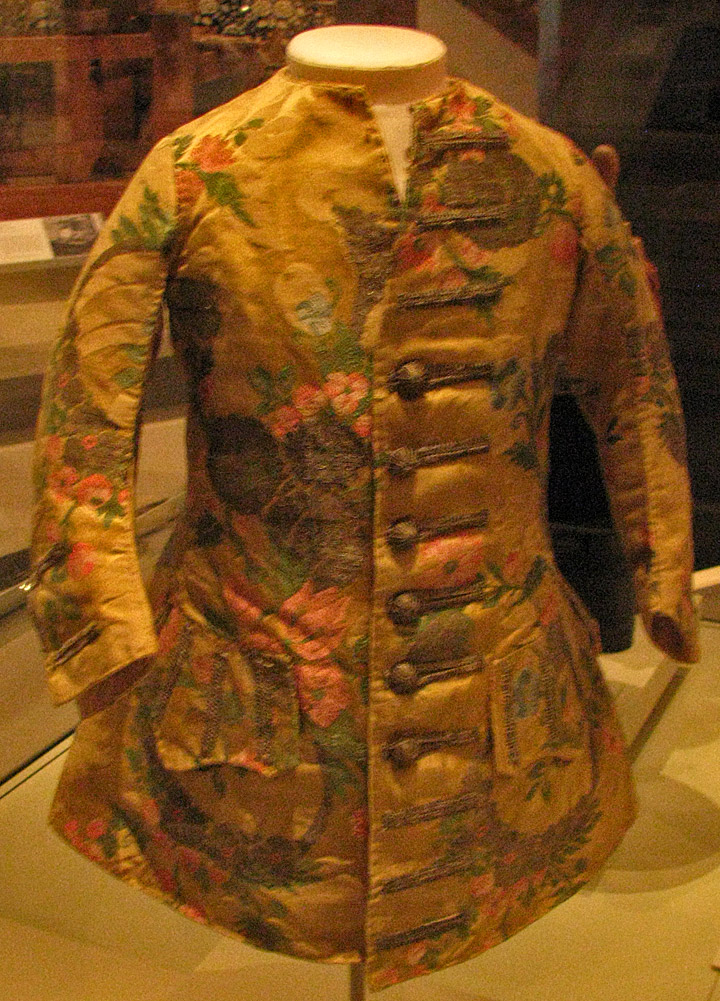 The overall aim of the Crystal is to provide openness and accessibility. It seeks to blur the lines between the public area of the street and the more private area of the museum. The goal is to act as an open threshold where people as well as artifacts animate the spaces. The main lobby is a three-story high atrium, named the Hyacinth Gloria Chen Crystal Court. The lobby is overlooked by balconies and flanked by the J.P. Driscoll Family Stair of Wonders and the Spirit House, an interstitial space formed by the intersection of the east and west crystals, intended as a space of emotional and physical diversion. 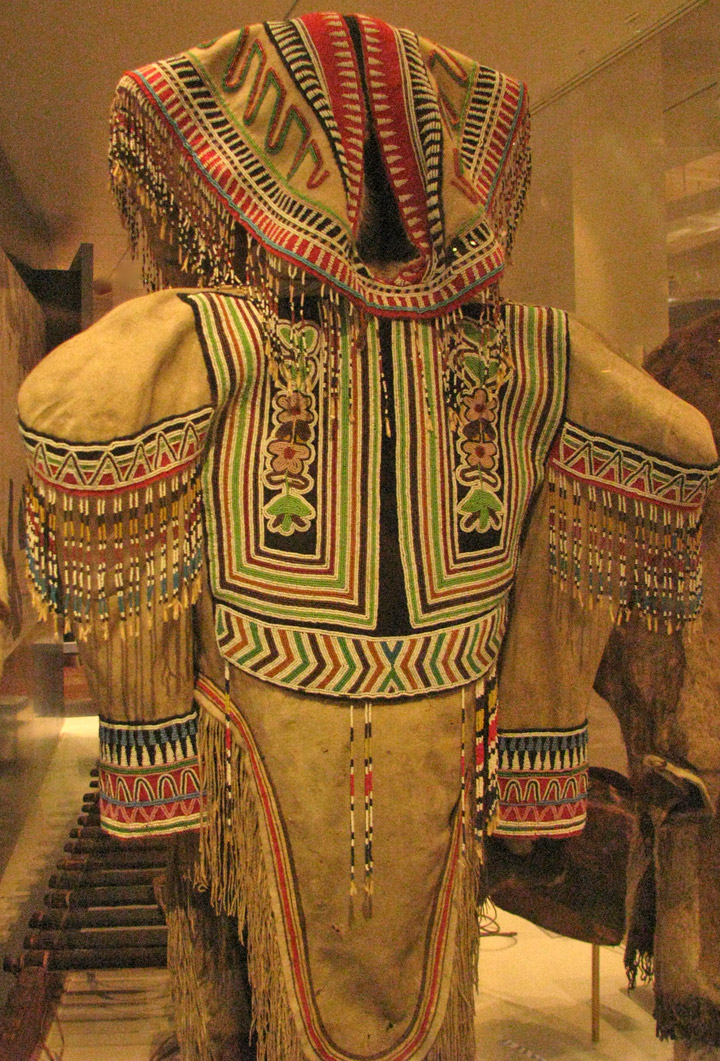 Existing parts of the museum are also being renovated. Galleries will be made larger, windows uncovered, and the original early-20th-century architecture made more prominent. The exteriors of the heritage buildings are to be cleaned and restored. The restoration of the 1914 and 1933 buildings is currently the largest heritage project underway in Canada. 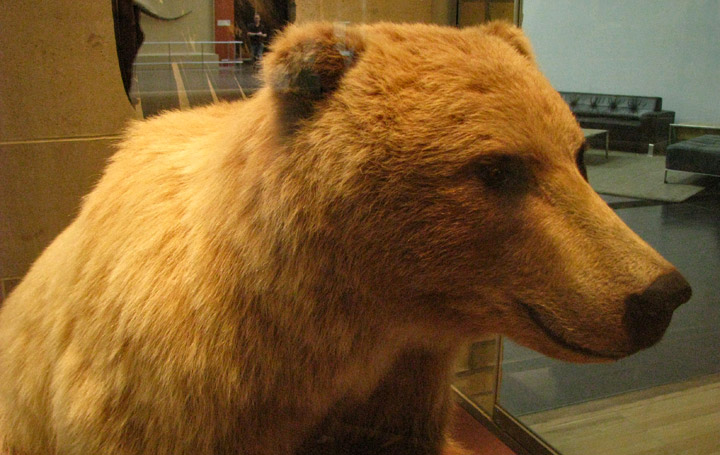 The first phase of the Renaissance ROM project opened to the public on December 26, 2005, including the newly-restored Rotunda with reproductions of the original oak doors, a restored axial view from the Rotunda west through to windows onto Philosophers' Walk, and a ten renovated galleries comprising a total of 90,000 square feet. This phase of gallery re-openings includes exhibits featuring the art and history of Japan, China, Korea, and of the Aboriginal peoples in Canada. 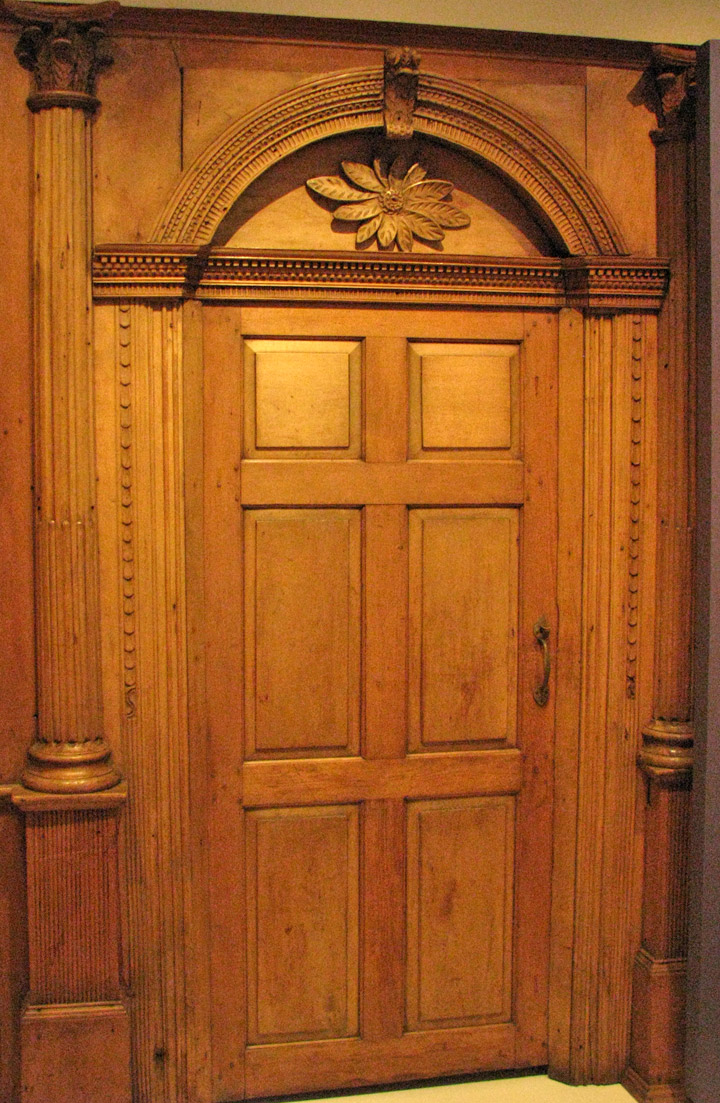 Opened on June 1, 2007, by Governor General Michaëlle Jean, the Architectural Opening of the "Michael Lee-Chin Crystal" was controversial. Public opinion was divided about the merits of its angular design. On its opening, Globe and Mail architecture critic Lisa Rochon complained that "the new ROM rages at the world," calling it oppressive, angsty, and hellish, while others (perhaps championed by the architecture critic at the competing Toronto Star, Christopher Hume) hailed it as a monument. The project also experienced budget and construction time over-runs, and drew comparisons to the Guggenheim Museum Bilbao for using so-called "starchitecture" to attract tourism. 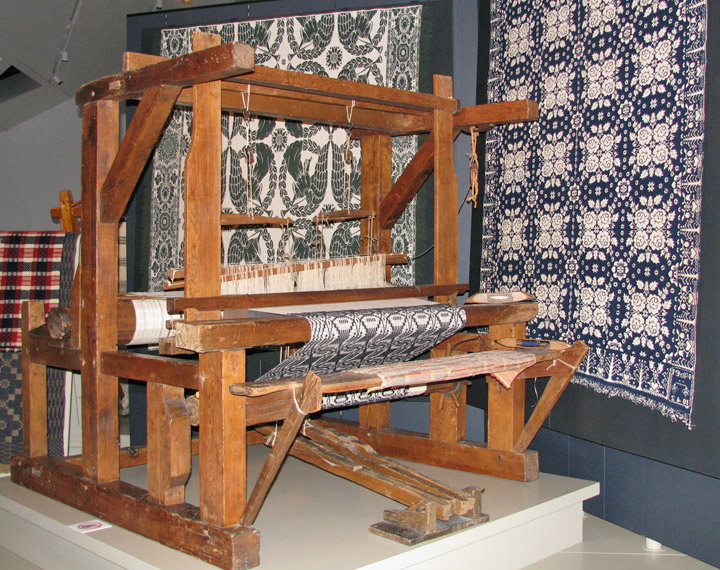 On October 2007, the Lee-Chin Crystal was incorrectly reported to have suffered from water leakage. This caused concerns regarding the building's resilience to weather, especially in the face of the new structure's proximate first winter. Although a two-layer cladding system was incorporated into the design of the Crystal, intended to prevent the formation of dangerous snow loads on the structure, past architectural creations of Daniel Libeskind, including the Denver Art Museum, have suffered from weather-related complications. 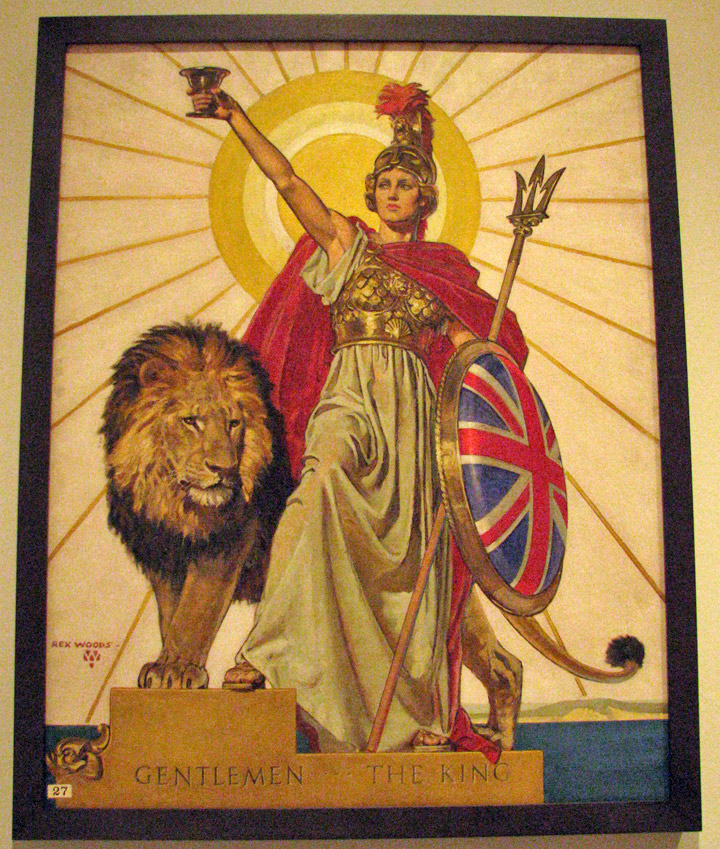 Installation of the permanent galleries of the Lee-Chin Crystal began mid-June 2007, after a ten-day period when all the empty gallery spaces were open to the public.