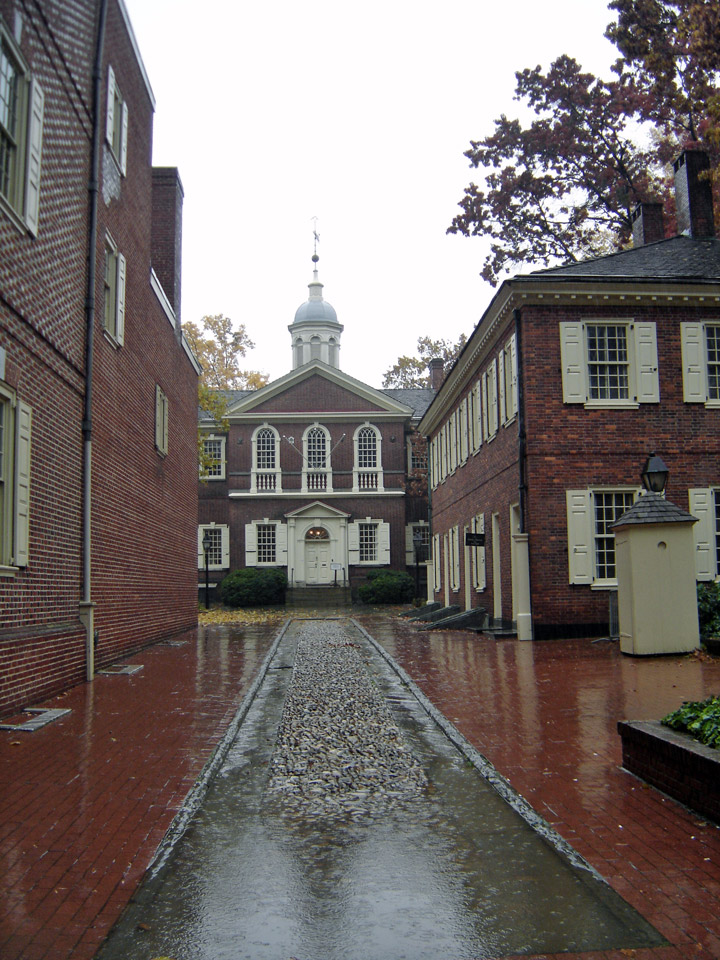 Carpenters' Hall — where the First Continental Congress met in 1774. This landmark building was erected between 1770 and 1774 by the Carpenters' Company, the oldest builders' organization in the United States (formed in 1724). Carpenters were architects as well as builders in those days, it should be noted. 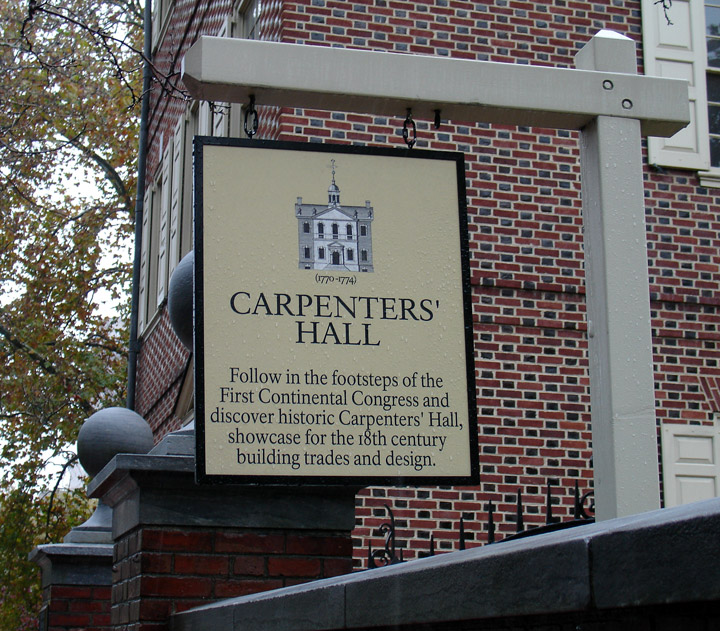 The Company published a book of rules and prices for its members in 1786. Articles and Rules was also a pattern book, and its use was restricted to members of the Carpenters' Company who faced expulsion if they showed it to outsiders. There is an amusing story of Thomas Jefferson's writing for a copy of the book in 1817, but even the former President — an amateur architect — was denied access to the secrets of the Carpenters' Company. 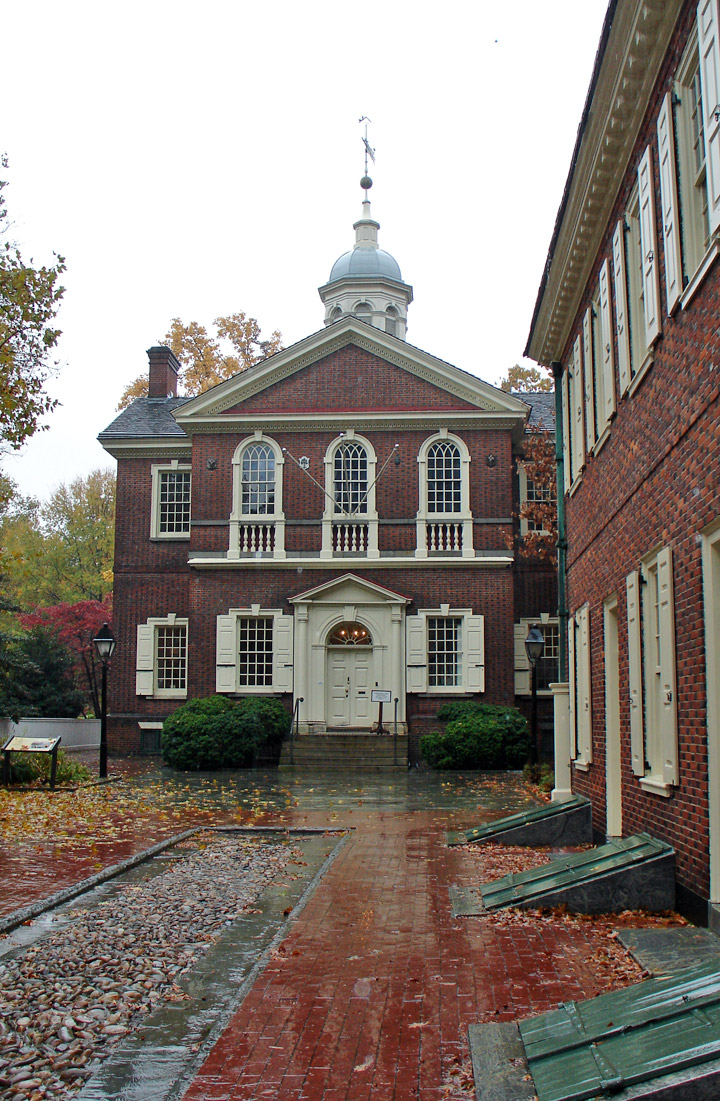 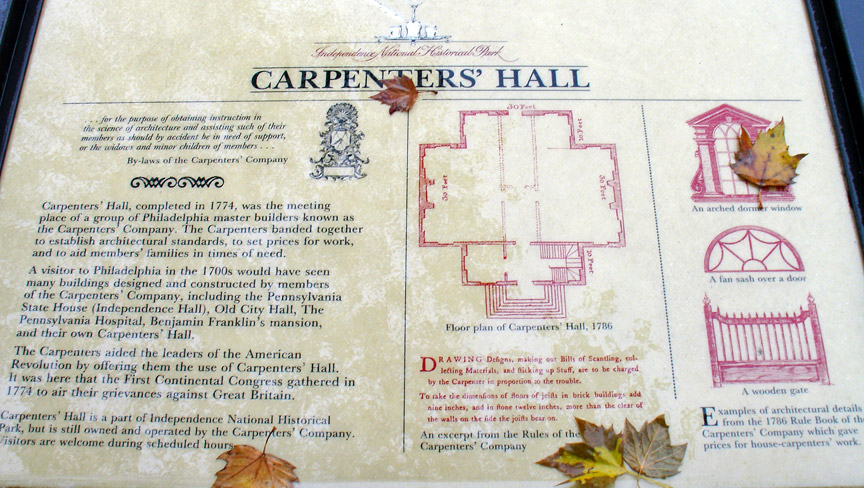 Carpenters' Hall has always stood out architecturally. Its proportions are perfect; it has a sense of balance, of time and place, and it was designed to endure. The Carpenters' Company still owns and maintains the building and holds meetings here. From September 5 to October 26, 1774, the First Continental Congress met in the eastern half of the bottom floor. Robert Smith, who designed the building for use as a guild hall (restored in 1857, and opened to the public), was a member of the Second Continental Congress in 1775, and Samuel Rhoads of the Carpenters' Company was a delegate to the First Continental Congress. Note the top-right window — That's where the Independence Hall Association's offices are! 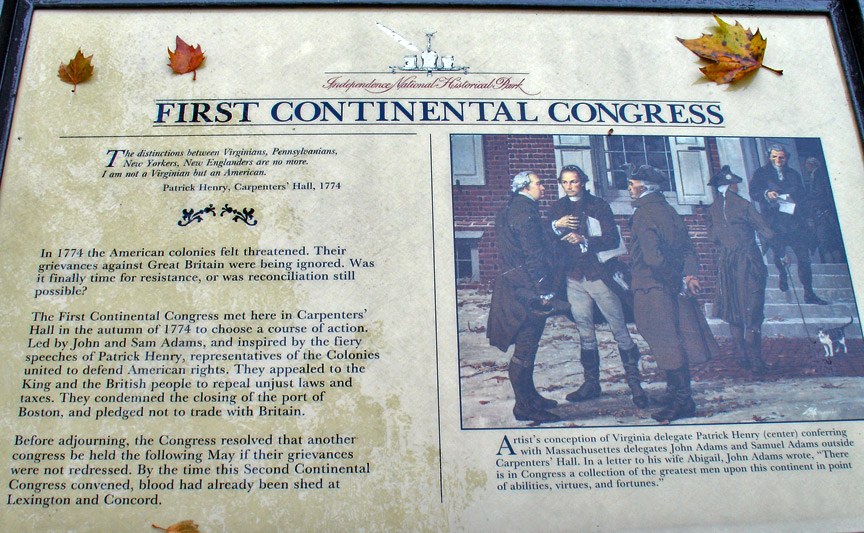 Carpenters' Hall was just completed when in September 1774 it found itself host to the First Continental Congress which met to oppose British rule. 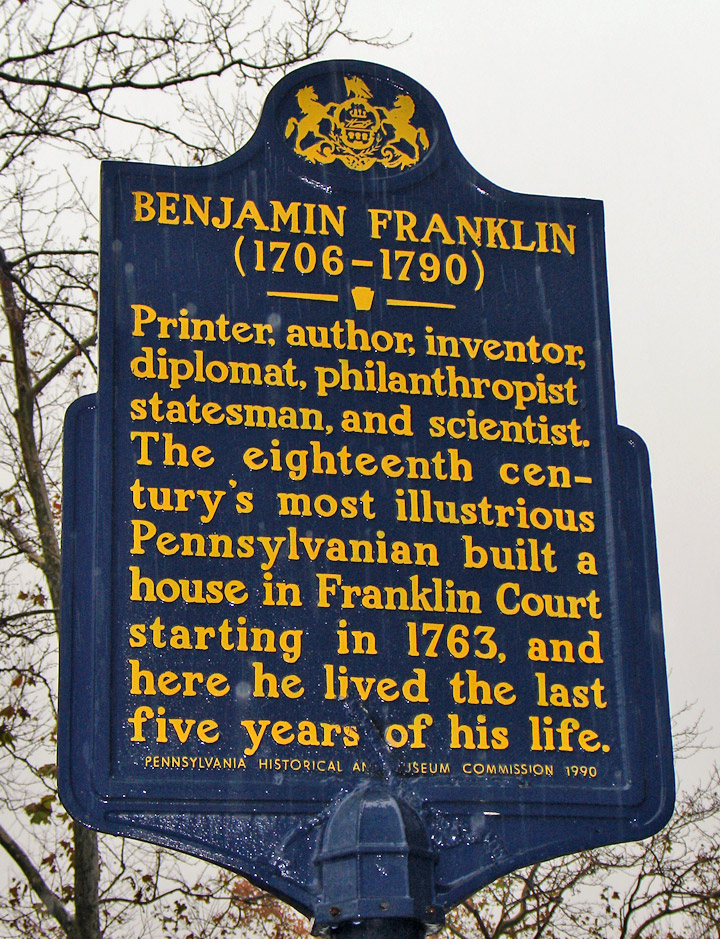 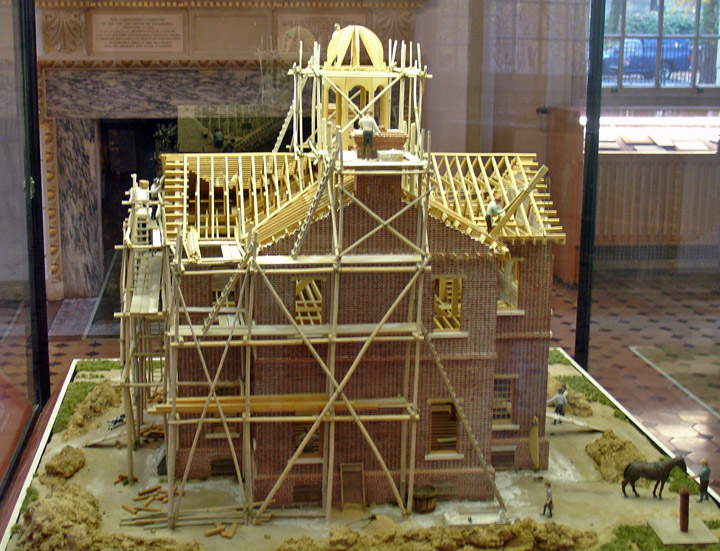 model of the building of Carpenter's Hall

Carpenters of the Colonial Era were architects as well as builders. The Company published a book of rules and prices and architectural designs called Articles and Rules in 1786. Only members of the Carpenters' Company were allowed to see the book. If a Carpenter showed it to an outsider, he would face expulsion. It's been said that Thomas Jefferson, the ex-President, was rebuffed in his attempt to obtain a copy of the book in 1817. 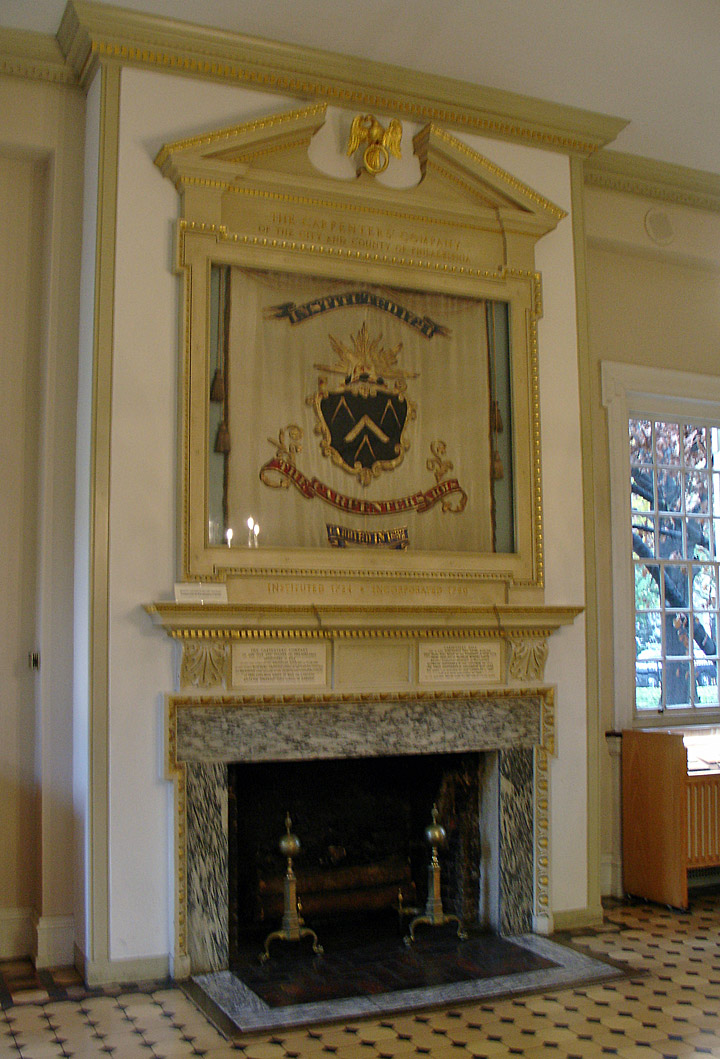 Located in the hub of colonial and capital Philadelphia, the Carpenters often found themselves in the center of political activity. This building housed the seven-week session of the First Continental Congress that met in 1774. Why, one might ask, did they not meet at the State House (Independence Hall) just a block away? The State House was perceived to be a hive of Tory sympathizers. In fact, some members of the Royalist press even suggested that the necks of the Revolutionary insurgents "might be inconveniently lengthened" if they did not desist in their activities. 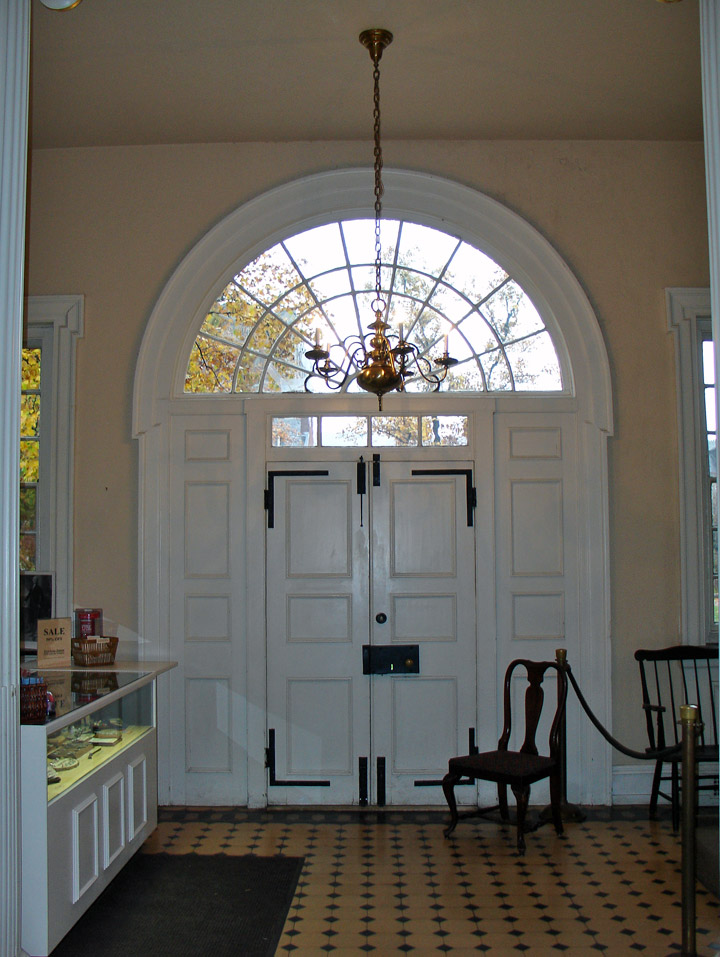 Palladium windows over the double doors 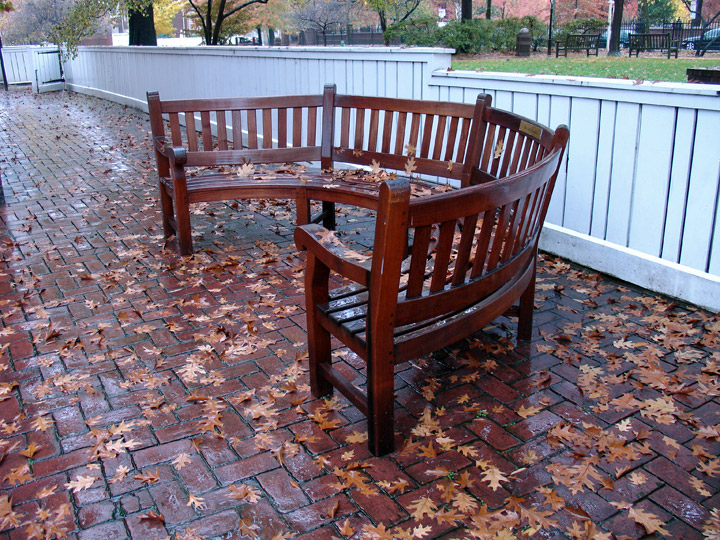 Although pleased with their success in renting space in their building, they were being squeezed out, so they built New Hall next door for their needs. However, no sooner was it completed than Secretary of War Henry Knox moved himself and his staff to the new building. 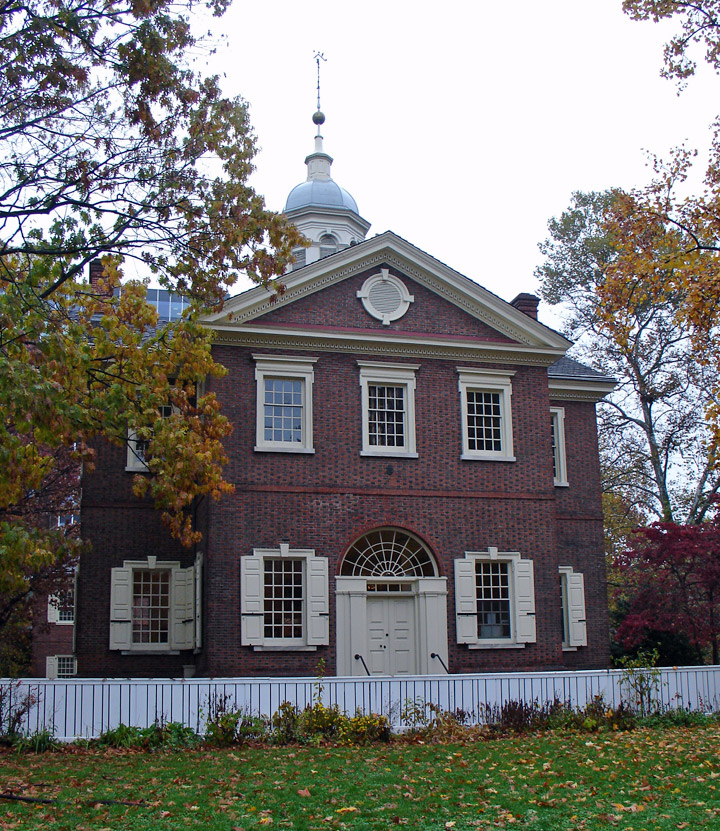 Architecturally, the building is in the form of a Greek cross. The pedimented doorway with Doric detail is gracious and welcoming. Three Palladian windows line the second floor under which are stone balustrades. The belt course (band separating the floors) is unusual in that it is outlined in wood instead of brick. At one time the gable over the windows contained the words "The Company Constituted 1724." In between the words "company" and "constituted" was the Carpenter's escutcheon. Underneath that read "Carpenters' Hall" in large letters. 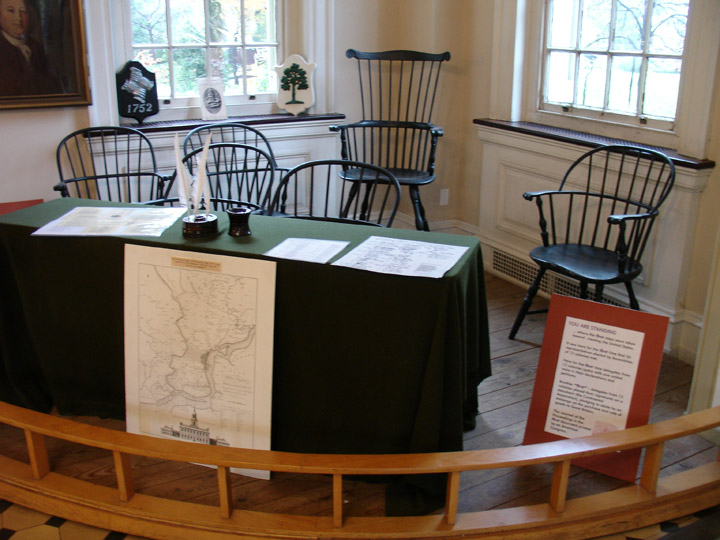 Windsor chairs used by the members of the First Continental Congress

Inside the Hall eight Windsor chairs used by members of the First Continental Congress are on display. Also displayed are early carpentry tools. Don't miss an opportunity to see a remarkable confluence of history and architecture. 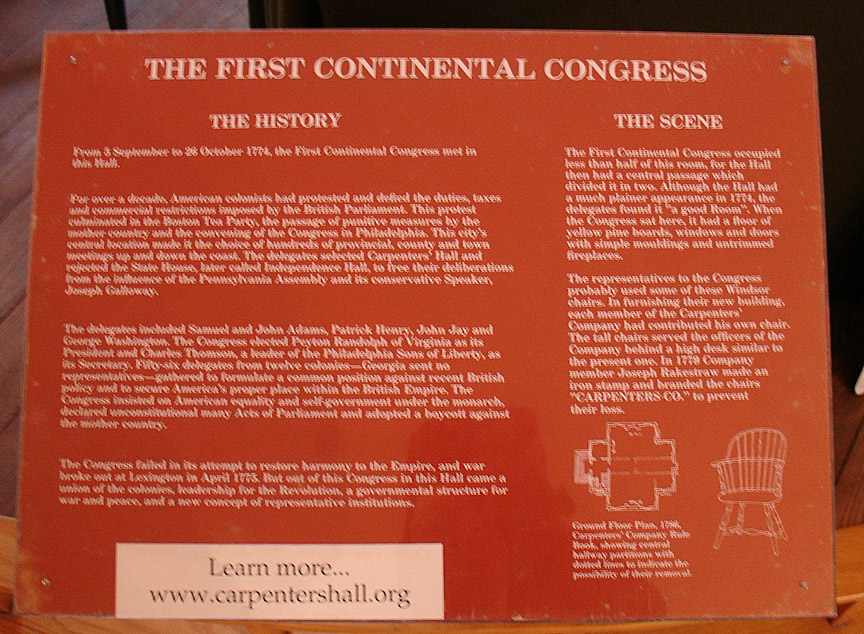 In attendance at the First Continental Congress here were George Washington and John Adams and the more well-known (at the time) Samuel Adams and Patrick Henry. (Benjamin Franklin was in England at the time.)

The Convention adjourned on October 26, 1774, resolving that another Congress would be held in Philadelphia in May, "unless the redress of grievances, which we have desired, be obtained before that time."

Here, Patrick Henry said, "I am not a Virginian, but an American." A few months after the close of the Convention, Henry said, "I know not what course others may take, but as for me, give me liberty or give me death!" in a speech to the Virginia Convention back in Richmond.

In 1857, the Carpenters' Company chose to restore and preserve this building as a historic landmark. 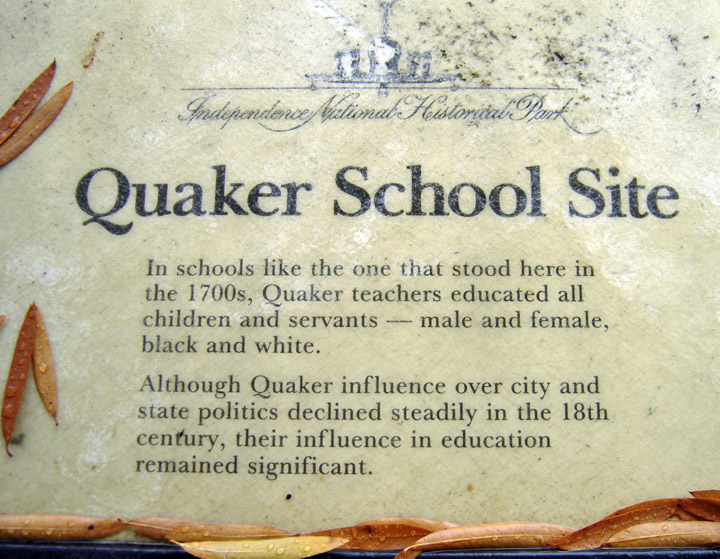 In 1955, the Independence Hall National Historical Park was making plans to restore and rebuild the area around Carpenters' Hall. Excavations uncovered a pornographic pipe tamper (used by 18th century smokers). 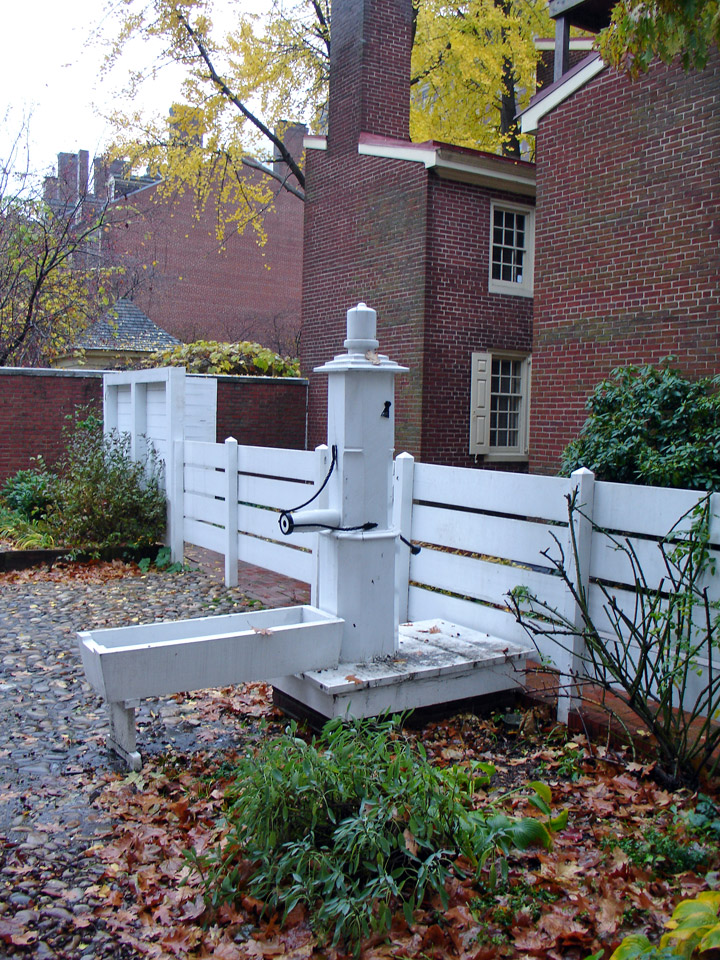