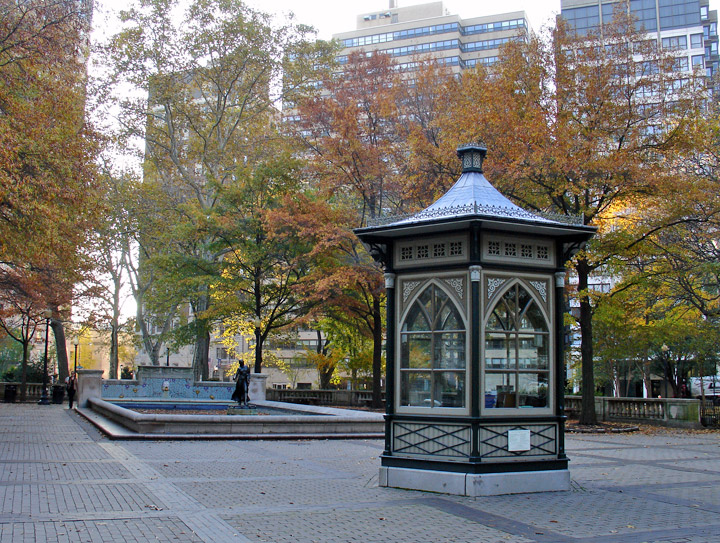 Rittenhouse Square, one of William Penn's original five, was known as the southwest square until 1825 when it was named for the astronomer-clockmaker, David Rittenhouse (1732-96). This amazing man of universal talents — one of many in 18th century Philadelphia — was a descendant of William Rittenhouse, who built the first paper mill in America in Germantown. He was at various times a member of the General Assembly and the State Constitutional Convention, and president of the Council of Safety. His survey of the Maryland-Pennsylvania boundary in 1763-64, to settle a dispute between the Penns and Lord Baltimore, was so accurate it was accepted and followed by Charles Mason and Jeremiah Dixon when they surveyed the "line" for which they are still remembered. Professor of Astronomy at the University of Pennsylvania and inventor of the collimating telescope, he was also president of the American Philosophical Society and the first director of the United States Mint. 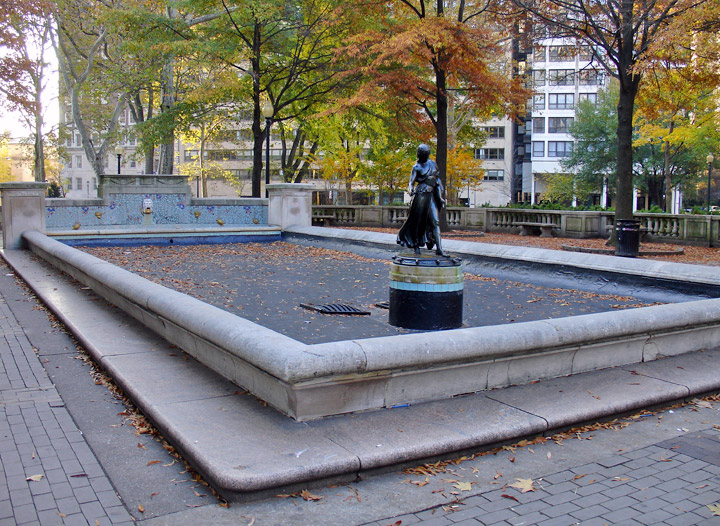 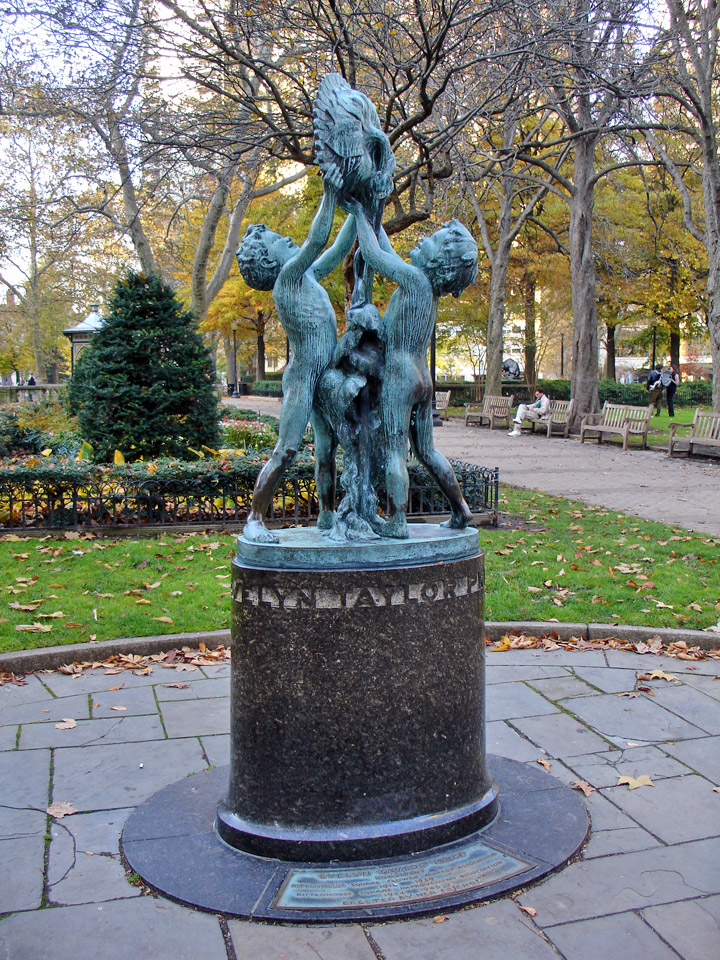 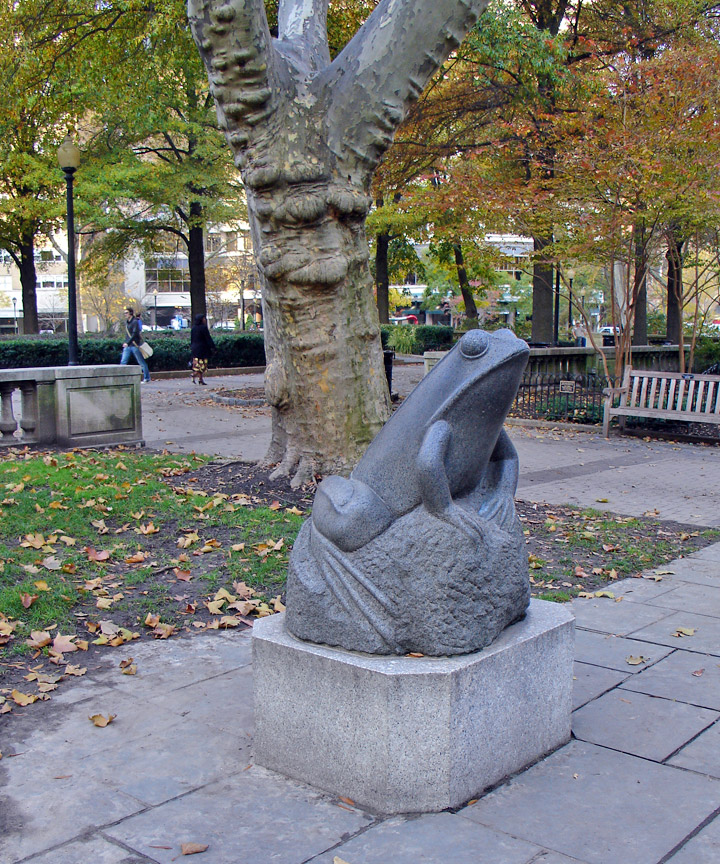 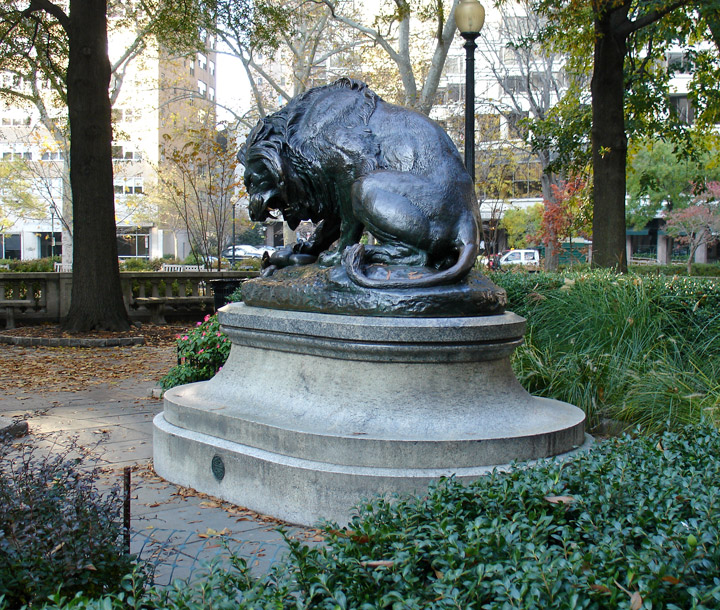 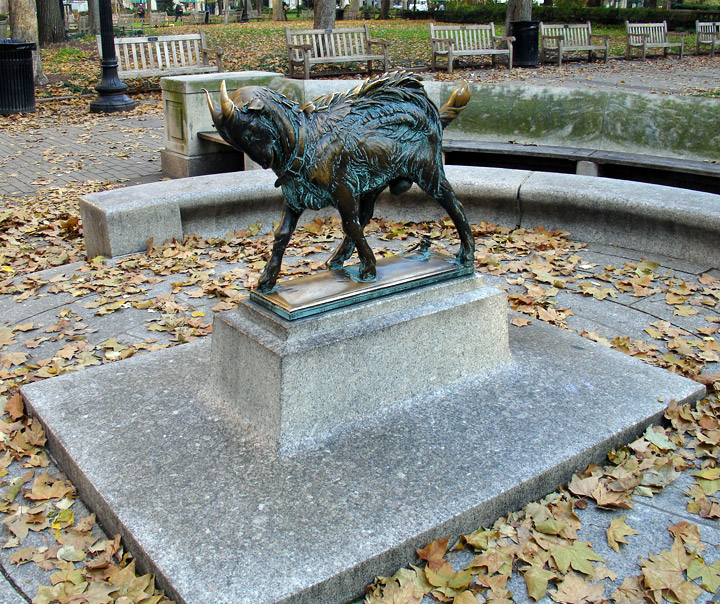 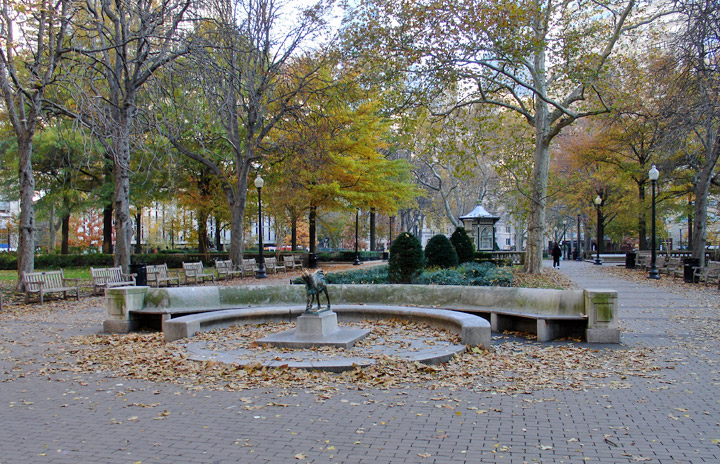 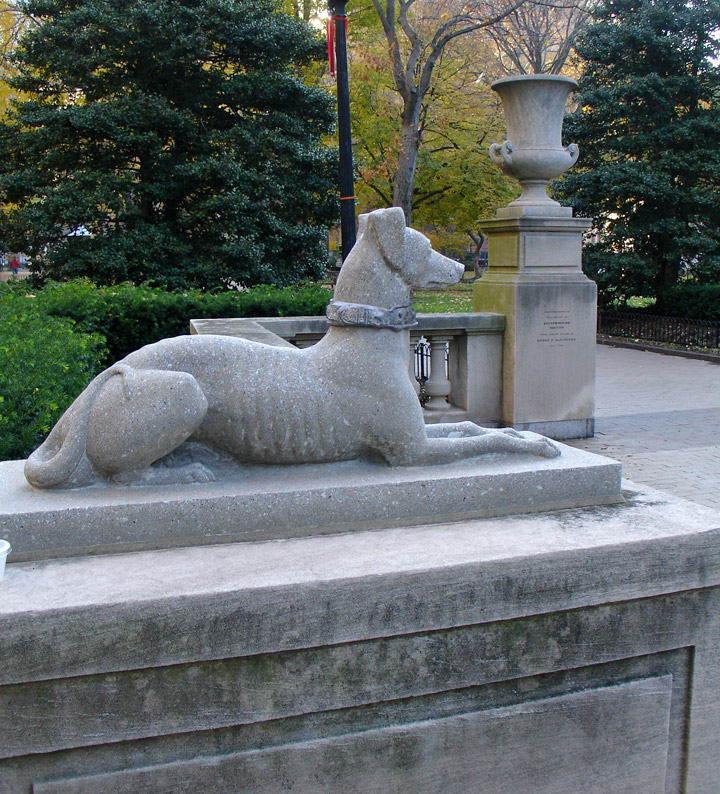 Rittenhouse Square has always denoted quality. The first house facing the Square was erected in 1840. During its next century the Square kept its residential quality. In 1913, the architect Paul Cret, who was one of the men responsible for Benjamin Franklin Parkway and many of its buildings, designed the Square's entrances, central plaza with the stone railings, pool and fountain. 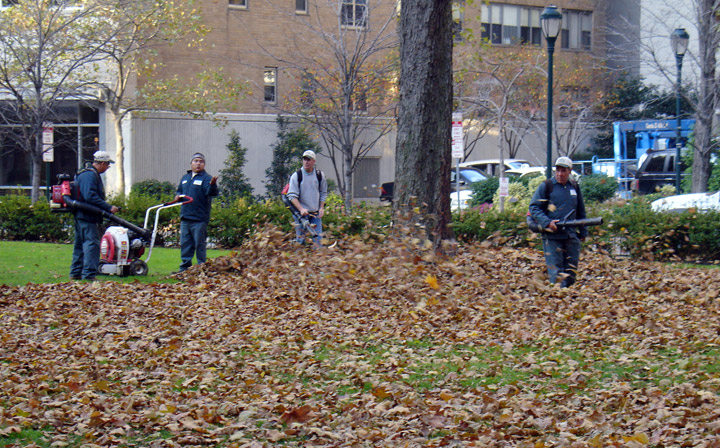 cleaning off the leaves

To have lived near or on the Square was a mark of prestige. Today, private homes are gone, but it still counts for something to live on the Square. There are several houses still standing, but they have been converted into apartments. With cooperative apartments and condominiums displacing private dwellings in the last three decades, some of the Old Guard still live on here — in these homes in the sky rather than family mansions. 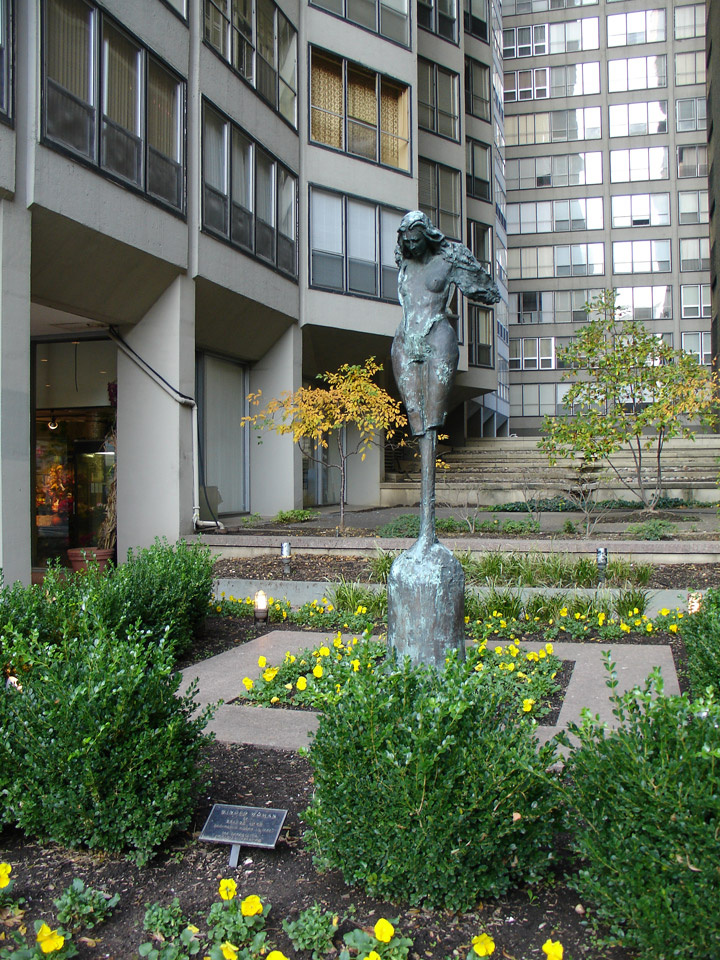 new on the square 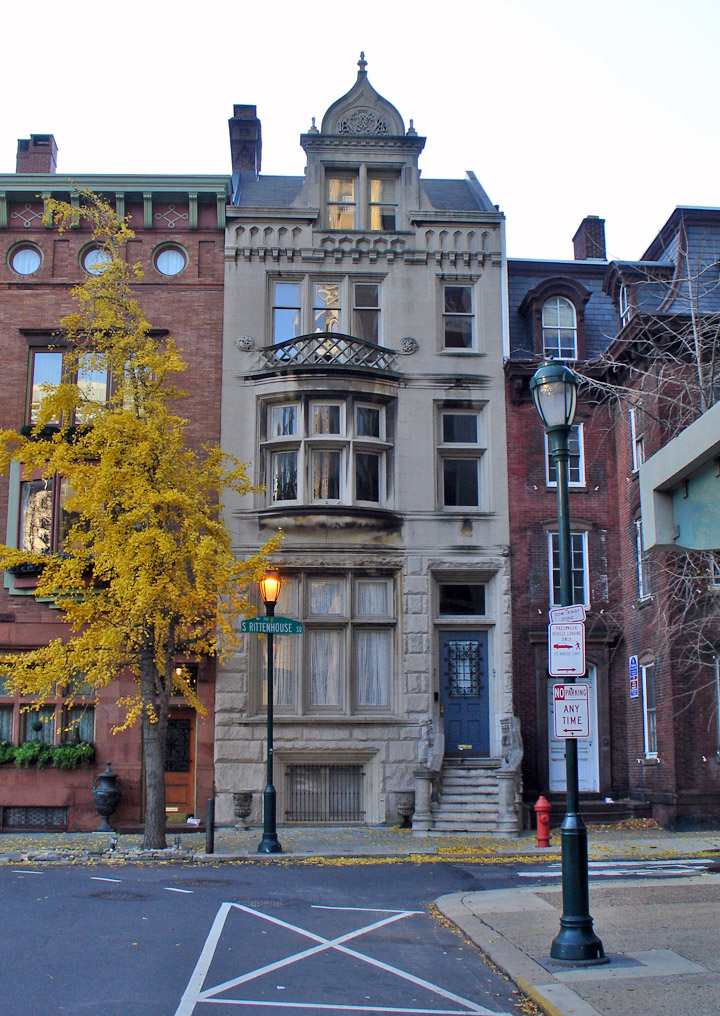 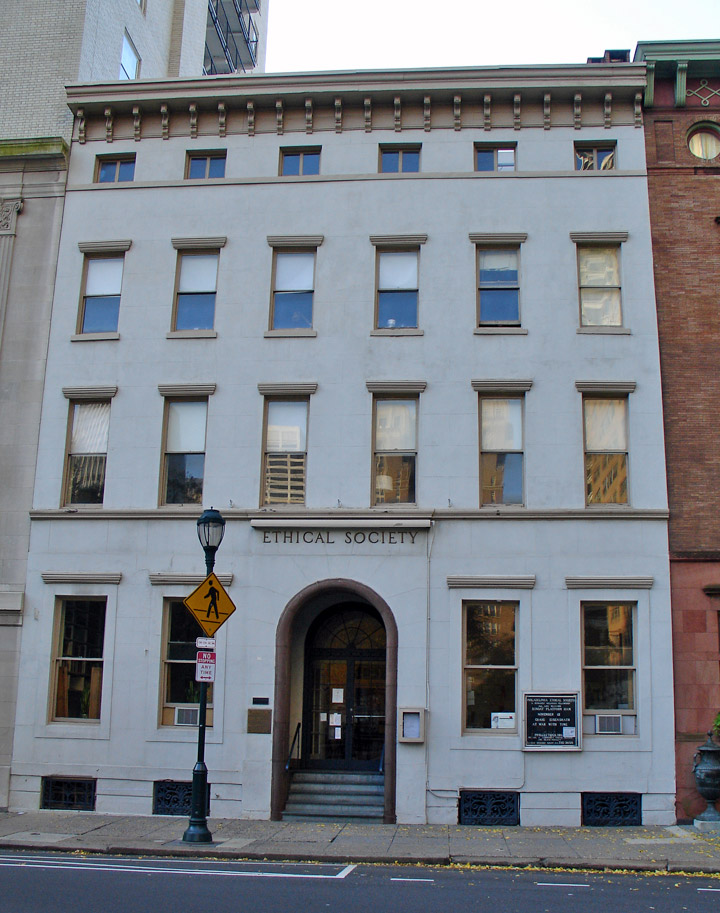 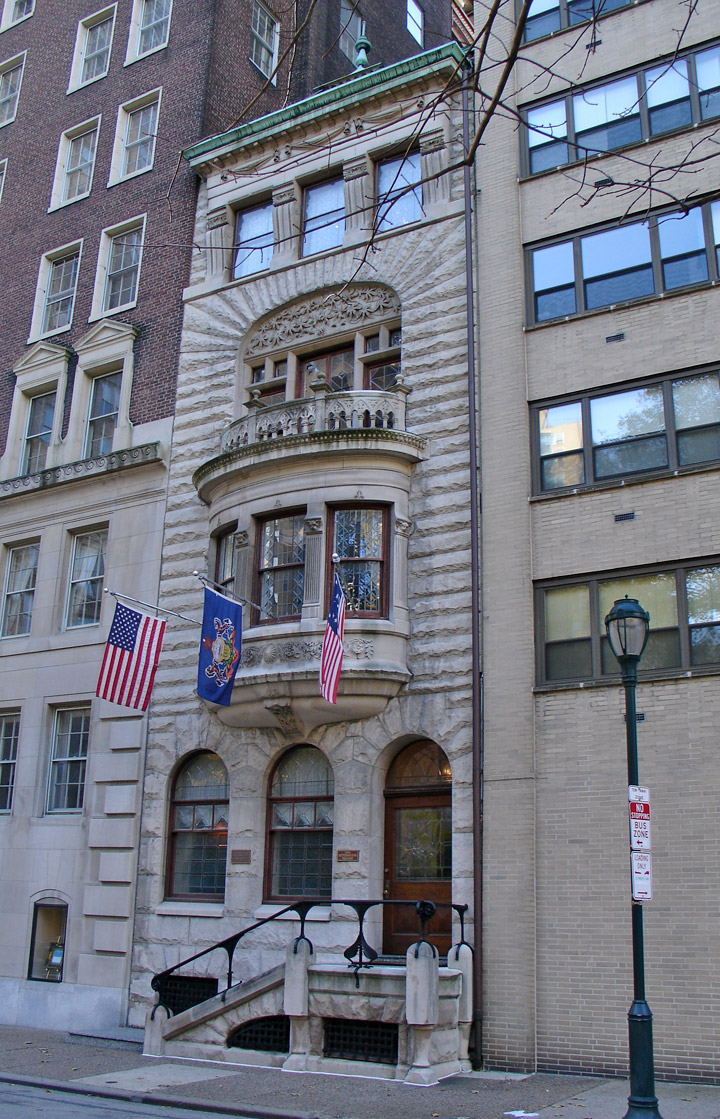 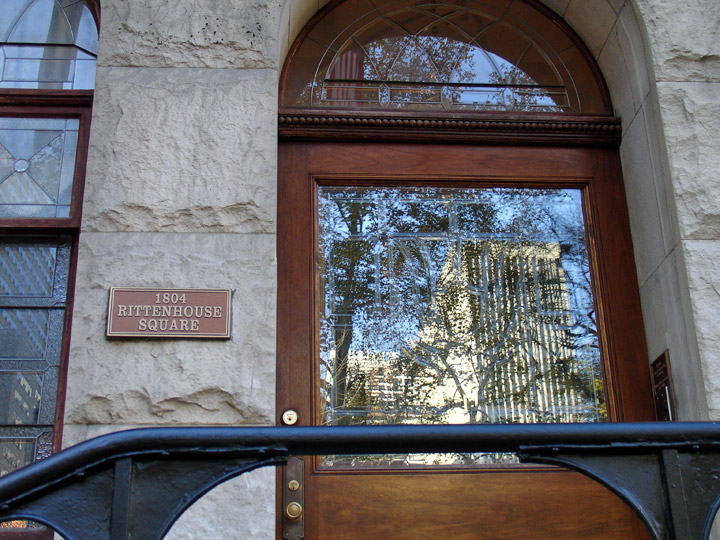 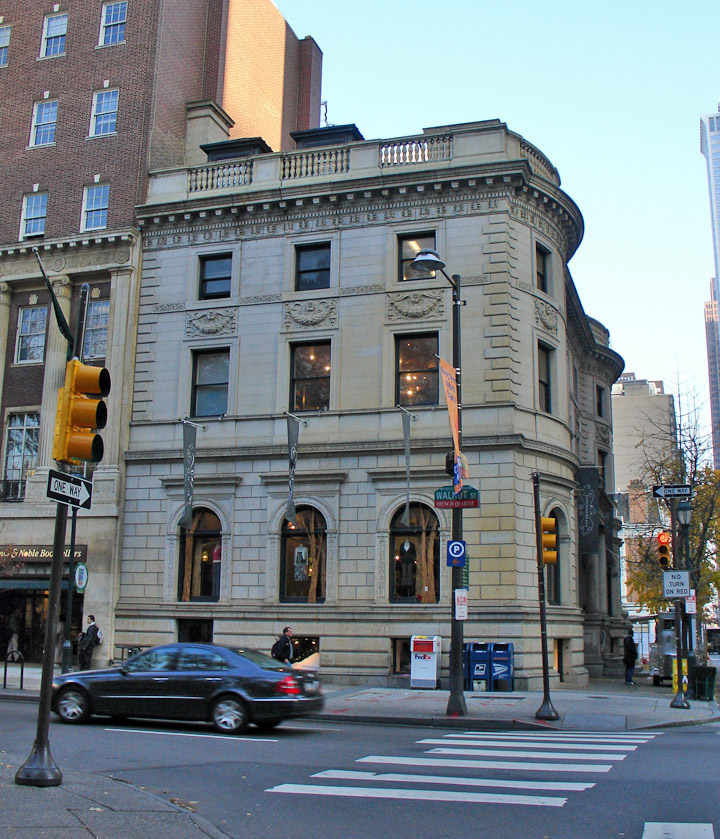 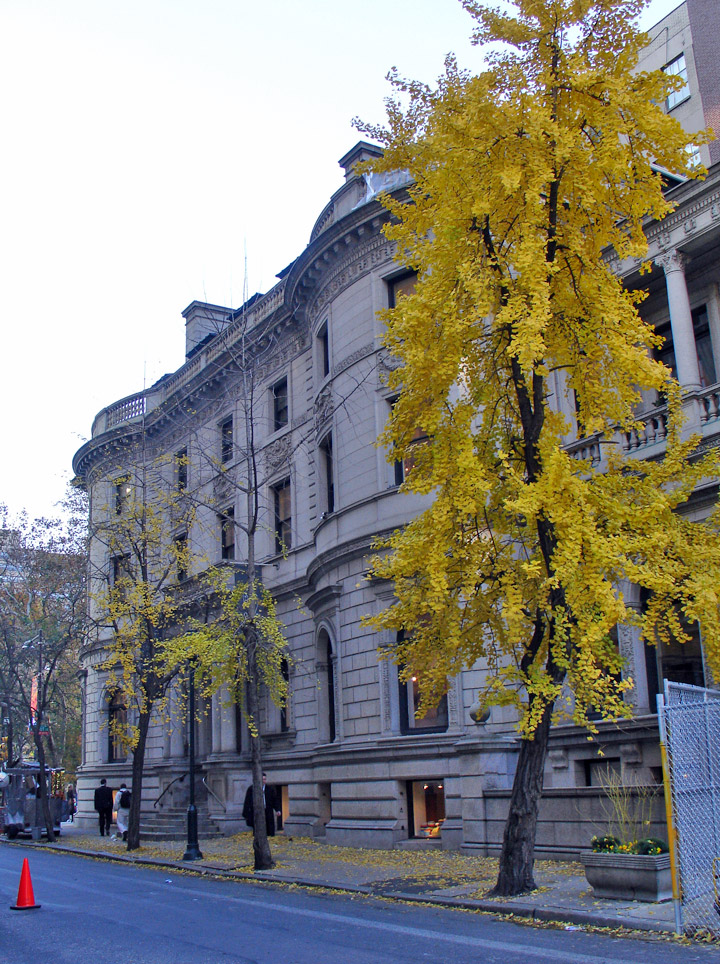 Facing the Square on the northeast corner is the former home of Alexander Van Rensselaer, a financier and supporter of the Philadelphia Orchestra under Leopold Stokowski. One of the few splendid old mansions to survive, it once housed the Pennsylvania Athletic Club. 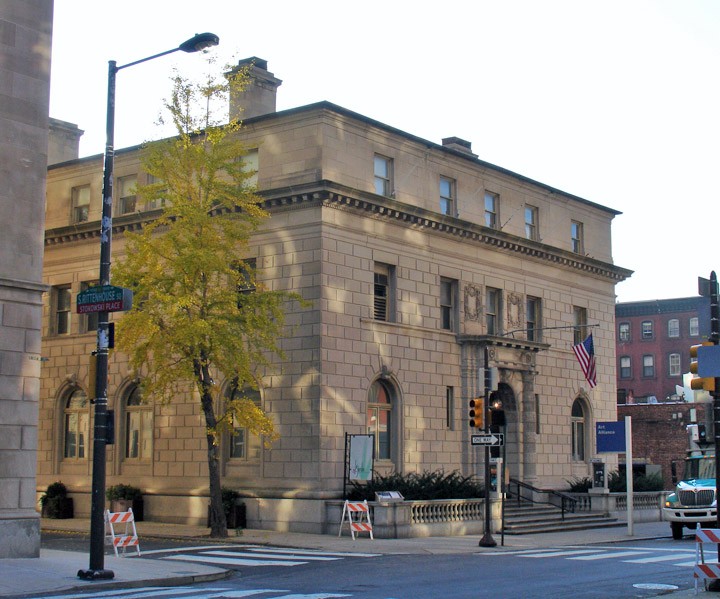 On the southeast side of the Square is the Philadelphia Art Alliance. Founded by Christine Wetherill Stevenson in 1915, it is housed in the former Samuel Price Wetherill mansion — he was a descendant of Samuel Wetherill, who along with Betsy Ross was a member of the Free Quaker Meeting House. One of the most active organizations of its kind, the Art Alliance sponsors art exhibits, dramatic and poetry readings, dance and musical events (the Alliance hosts a party for new principals in the Philadelphia Orchestra), architectural displays and lectures of all kinds. To wander through the galleries or attend one of the musicals or lectures, which are open to the public and usually free, is a delight. 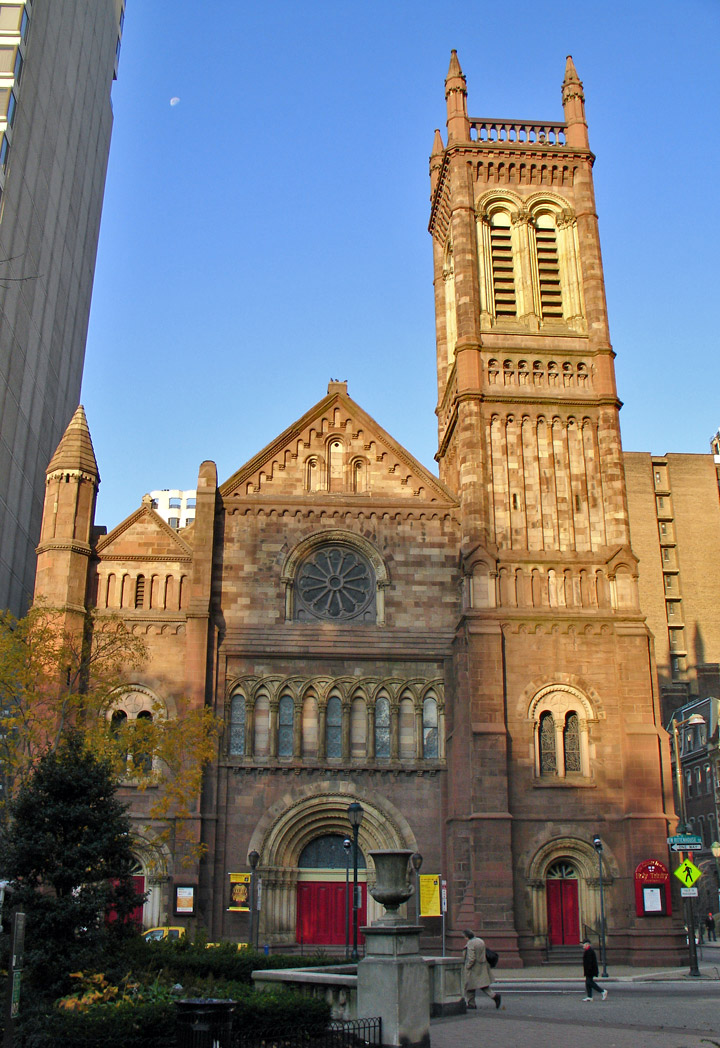 Around the Square itself, there are few old buildings left, but the Church of the Holy Trinity on the northwest corner is another of John Notman's, this one dating from 1857-59. One of the city's most fashionable congregations, it had for rector the Reverend Phillips Brooks (1835-93), best remembered today for writing the words to "O Little Town of Bethlehem." 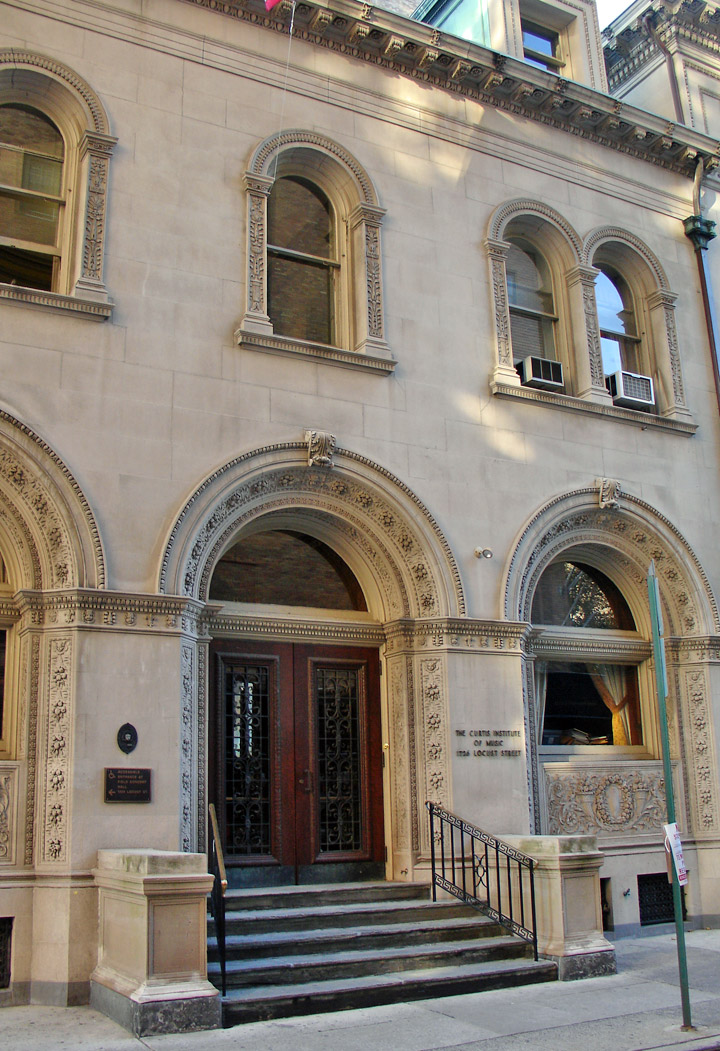 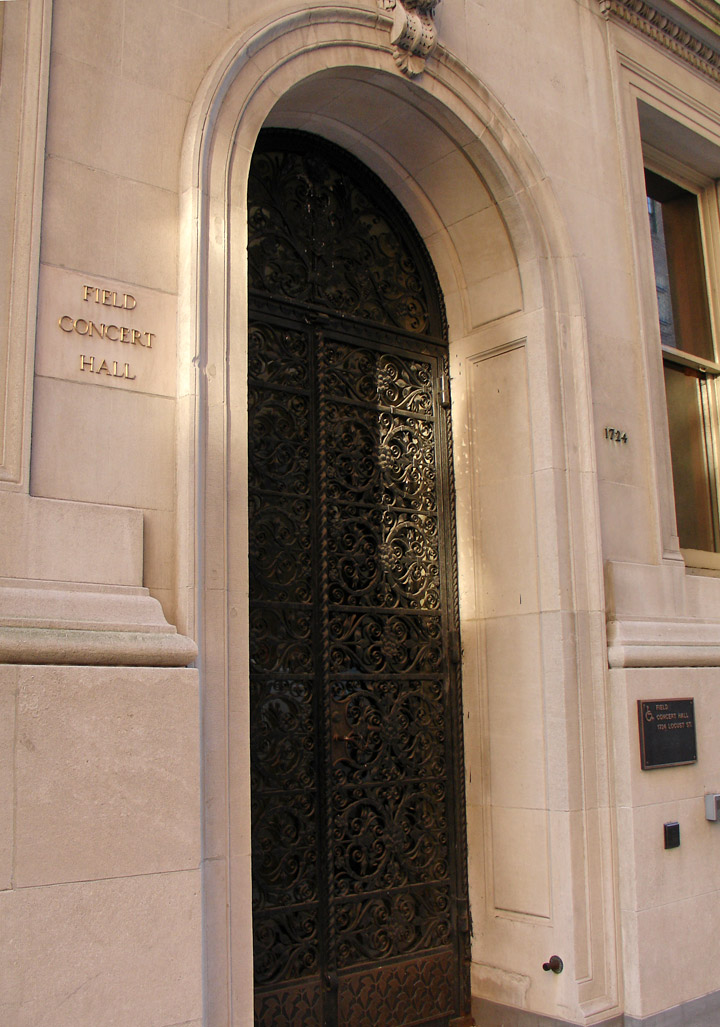 At the corner of 18th and Locust Street is The Curtis Institute of Music. Founded in 1924 by Mrs. Mary Louise Curtis Bok Zimbalist, it is a unique conservatory of music for it is entirely a scholarship school. Some of the noted musicians who have attended Curtis are Samuel Barber, Leonard Bernstein, Anna Moffo, and Nadja Salerno-Sonnenberg. The building was the home of George Childs Drexel, the banker, and in addition to the lecture rooms, practice studios and administration offices, it has a charming small music hall for concerts over which is a fully equipped operatic rehearsal hall. Finding Philadelphia Tickets may prove difficult because of how small the music hall is; however, waiting in line beforehand or checking online for ticket availability will be very helpful. 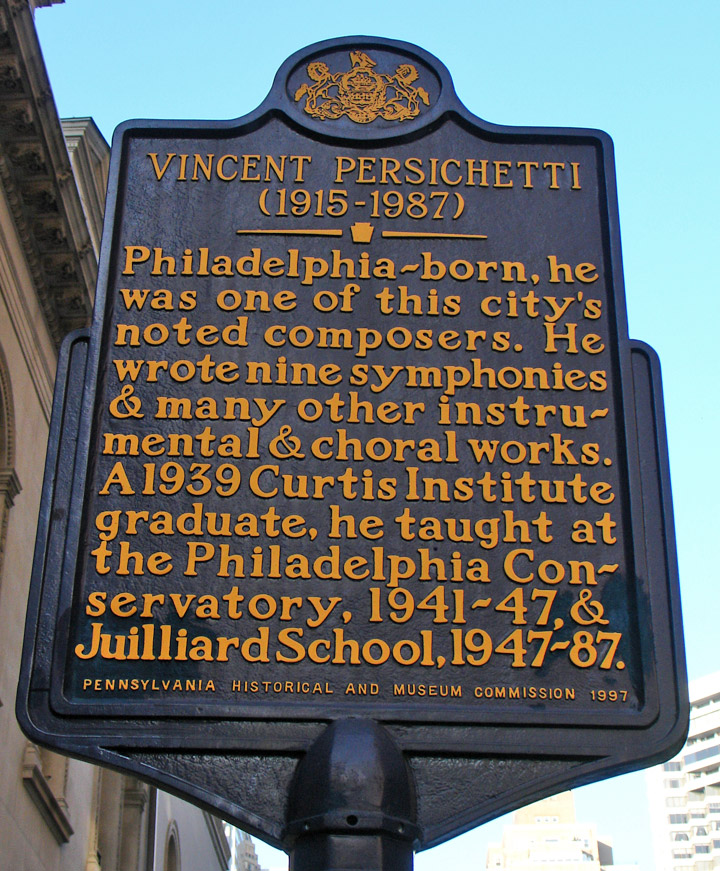 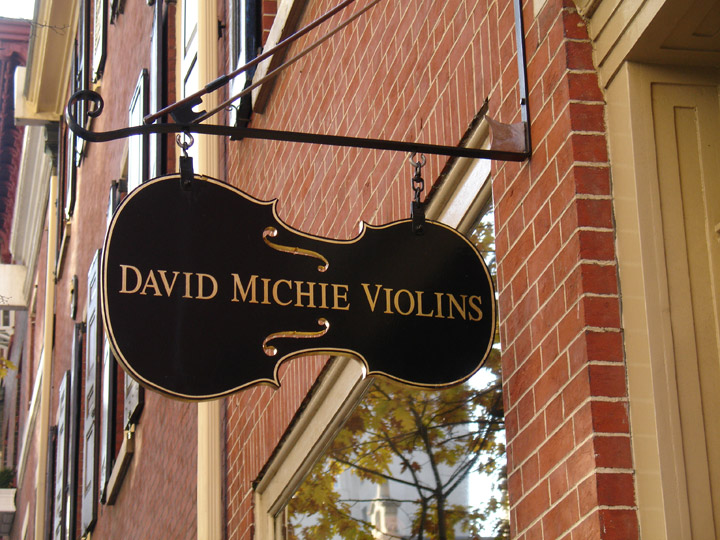 violin sales near the music institute 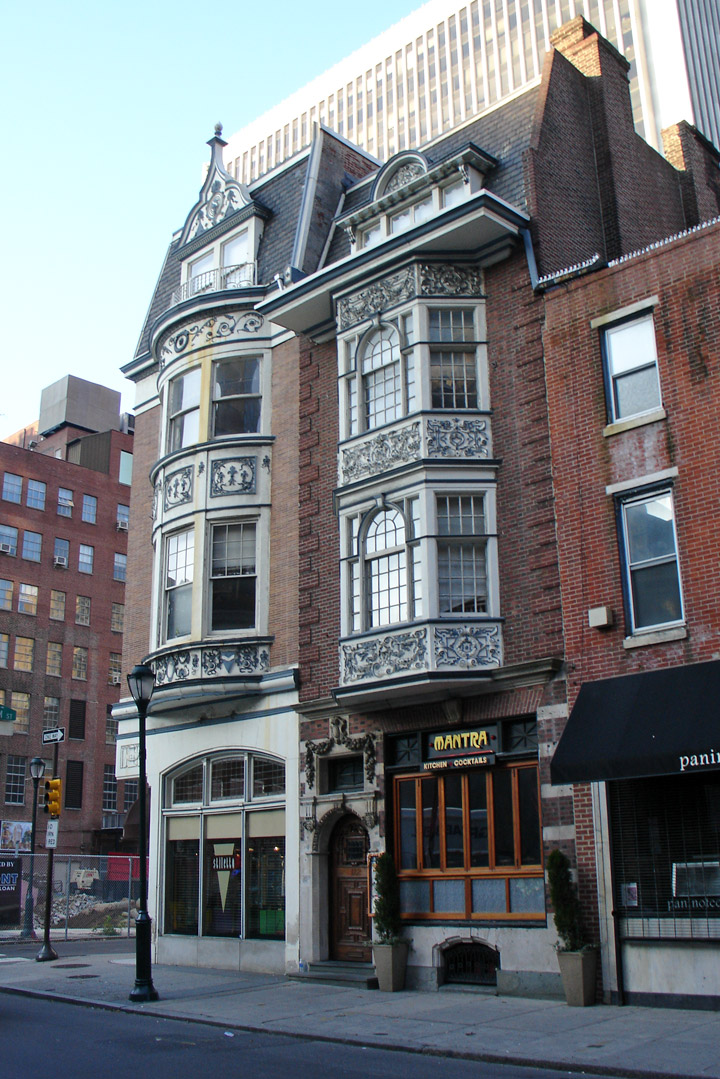 a group of brownstones that date from the Civil War period and later
This elegant structure has a projecting bay window. 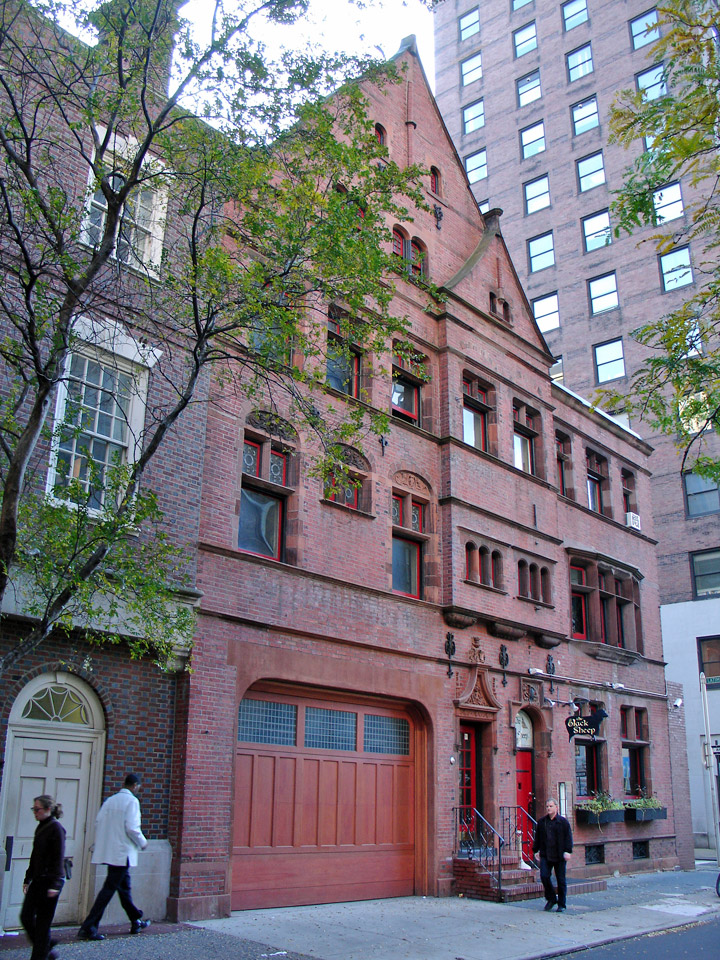