Battle of Gettysburg, fought July 1 through July 3, 1863, considered by most military historians the turning point in the American Civil War. The Battle of Gettysburg was a decisive engagement in that it arrested the Confederates' second and last major invasion of the North, destroyed their offensive strategy, and forced them to fight a defensive war in which the inadequacies of their manufacturing capacity and transportation facilities doomed them to defeat. 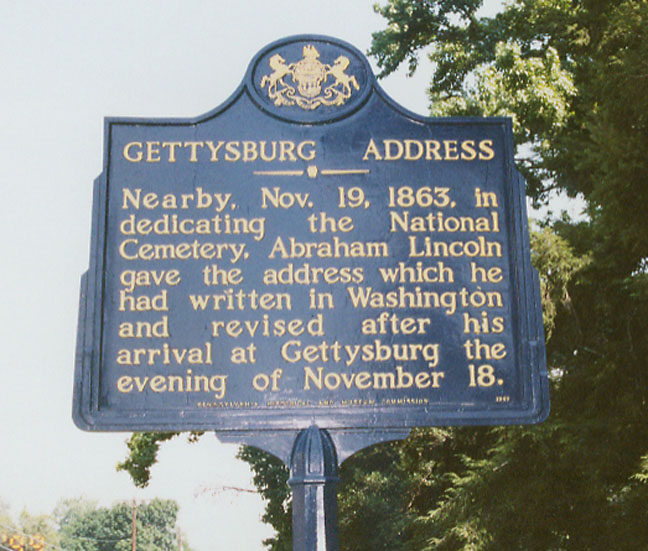 the President addressed the Nation at the cemetery

The Army of the Potomac, under the Union general George Gordon Meade, numbered about 85,000; the Confederate army, under General Robert E. Lee, numbered about 75,000. After the Battle of Chancellorsville on May 2 to 4, an important victory for the Confederates, Lee divided his army into three corps, commanded by three lieutenant generals: James Longstreet, Richard Stoddert Ewell, and Ambrose Powell Hill. Lee then formulated a plan for invading Pennsylvania, hoping to avert another federal offensive in Virginia and planning to fight if he could get the federal army into a vulnerable position; he also hoped that the invasion might increase Northern war-weariness and lead the North to recognize the independence of the Confederate States of America. In pursuit of this plan, Lee crossed the Blue Ridge Mountains, proceeded up the Shenandoah Valley, and, crossing Maryland, entered Pennsylvania. Upon learning federal troops were north of the Potomac, Lee decided to concentrate his whole army at Gettysburg. 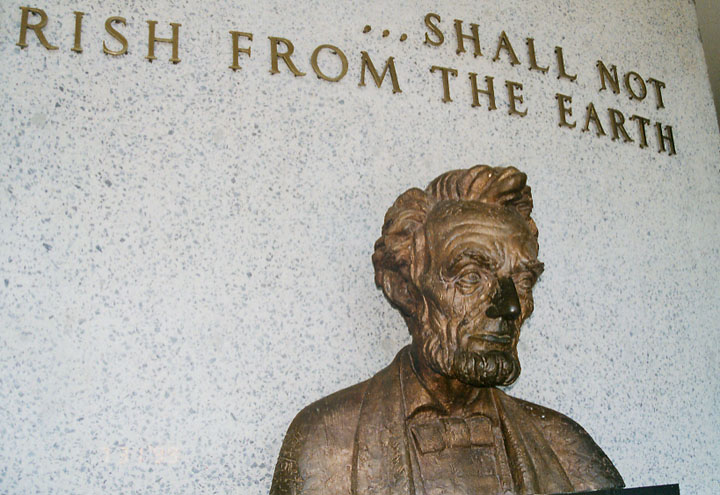 On June 30, Confederate troops from General Hill's corps, on their way to Gettysburg, noted federal troops that Meade had moved down to intercept the Confederate army. The battle began on July 1 outside of Gettysburg with an encounter between Hill's advance brigades and the federal cavalry division commanded by Major General John Buford, supported by infantry under Major General John Fulton Reynolds. Hill encountered stubborn resistance, and the fighting was inconclusive until Ewell arrived from the north in the afternoon. The Confederates pushed against General Oliver Howard's corps and forced the federal troops to retire from their forward positions to Culp's Hill and Cemetery Ridge, southeast of Gettysburg. The fighting had been heavy on both sides, but the Union troops suffered more losses. More than 4000 men were taken prisoner by the Confederates, and Federal General John Reynolds was killed in battle. The federals did manage to capture Confederate General Archer, the first Confederate officer to be taken prisoner after Lee assumed command of the Confederate army. The corps led by Ewell did not move in to attack the Union troops but waited for General Longstreet to bring in his corps to reinforce the outnumbered Confederate troops. 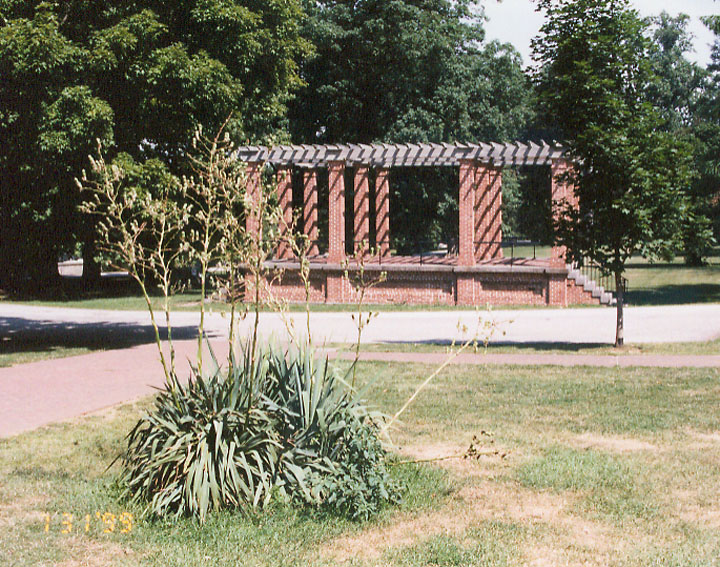 location of the Gettysburg address

On the following day, July 2, Meade formed his forces in the shape of a horseshoe, extending westward from Culp's Hill and southward along Cemetery Ridge to the hills of Little Round Top and Round Top. The Confederates, on the other hand, were deployed in a long, thin, concave line, with Longstreet and Ewell on the flanks and Hill in the center.

a farm within the National Battle Park

Lee, against the advice of Longstreet and despite the fact that he had no cavalry, resolved to attack the federal positions. Longstreet was unable to advance until late afternoon, thus allowing the federal troops to make preparations for the expected assault. General Abner Doubleday of the federal army strengthened his hold on Cemetery Hill. The federals held Cemetery Ridge and Little Round Top, but Longstreet moved Confederate troops along Peach Orchard, driving the federals from their positions there. Although Ewell won part of Culp's Hill, he was unable to break the federal line there or on the eastern part of Cemetery Ridge. On the night of July 2, Meade held a council of war in which the decision was made not to retreat. 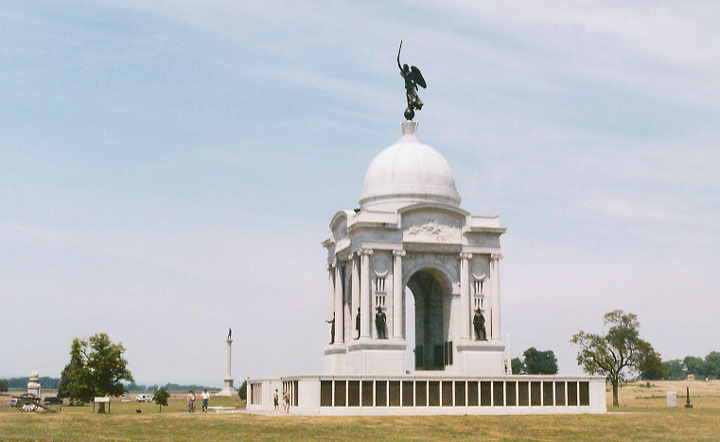 On the third day of battle, the federals were secure in their positions and the Confederates had lost their offensive stance. General Lee decided to mount an attack despite opposition from other Confederate generals. 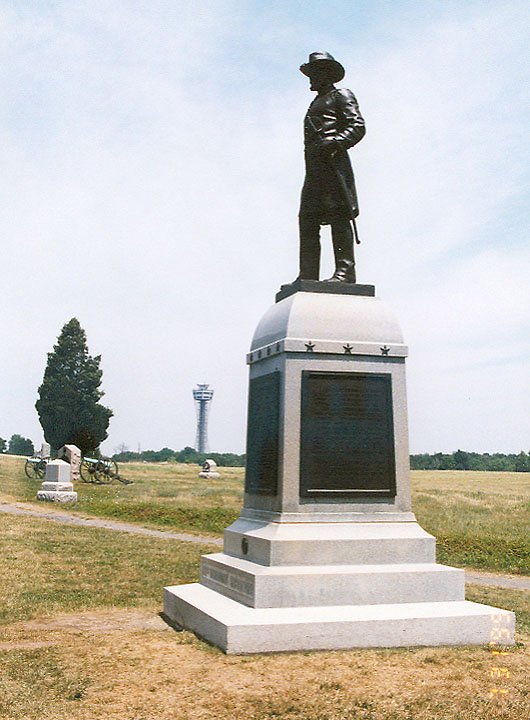 the Gettysburg Battlefield observation tower in the background

The offensive did not begin until after noon. Groups from three Confederate divisions, including the division led by Major General George E. Pickett, totaling fewer than 15,000 men, took part in a memorable charge on Cemetery Ridge against a withering barrage of federal artillery and musket fire. The attack is known as Pickett's Charge. Although the Confederate troops breached Meade's first line of defense, the strain on the Confederates proved too great, and they fell back, having lost over three-fourths of their force. 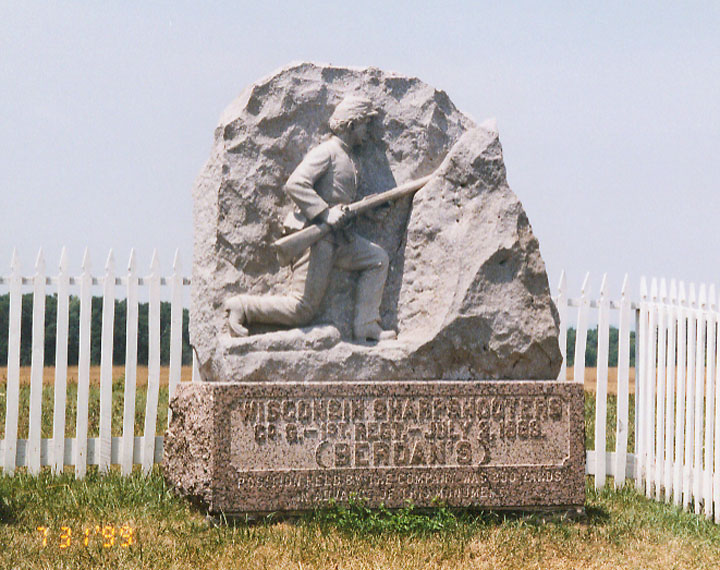 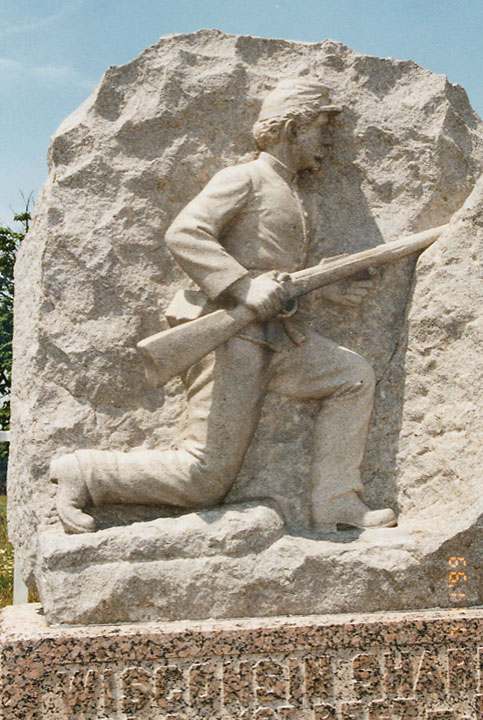 With the repulse of Pickett's Charge, the Battle of Gettysburg was virtually over. On the night of July 4, Lee began his retreat to Virginia, expecting a counterattack from the federal army. 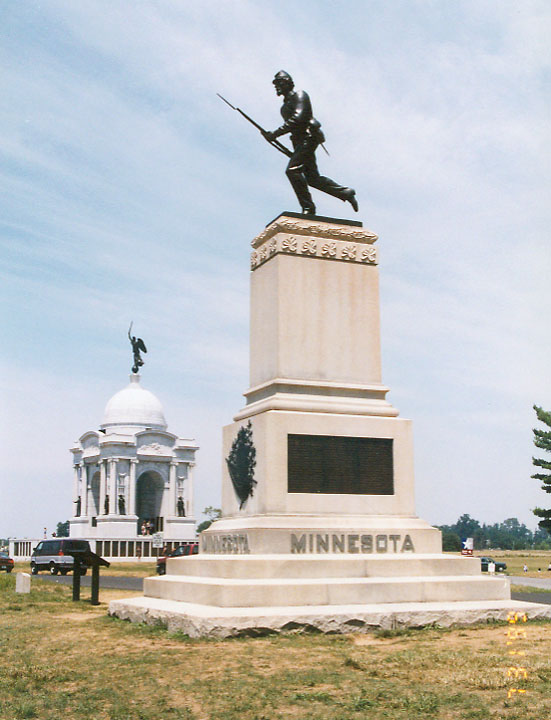 Meade, however, did not attack, due perhaps to heavy rains which hampered pursuit of the retreating Confederates. During the three days of battle, the Union Army had about 23,000 casualties, and the Confederates had at least 25,000. 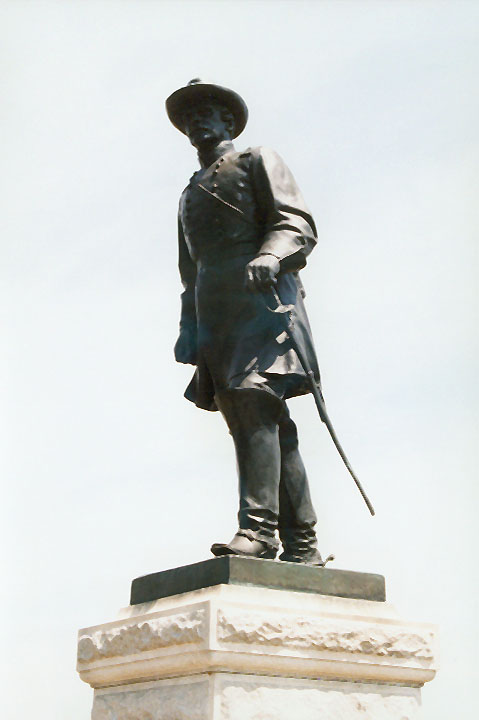 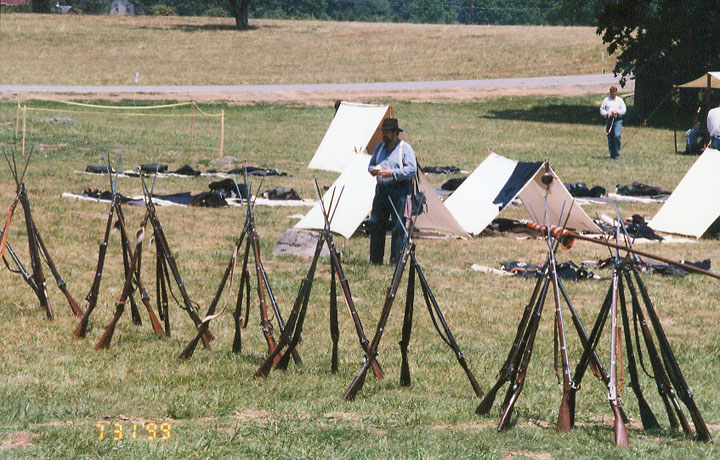 muskets racked ready for the muster 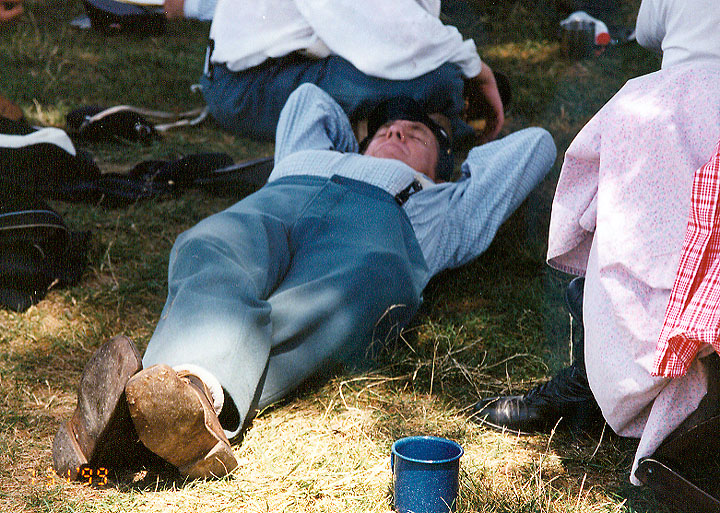 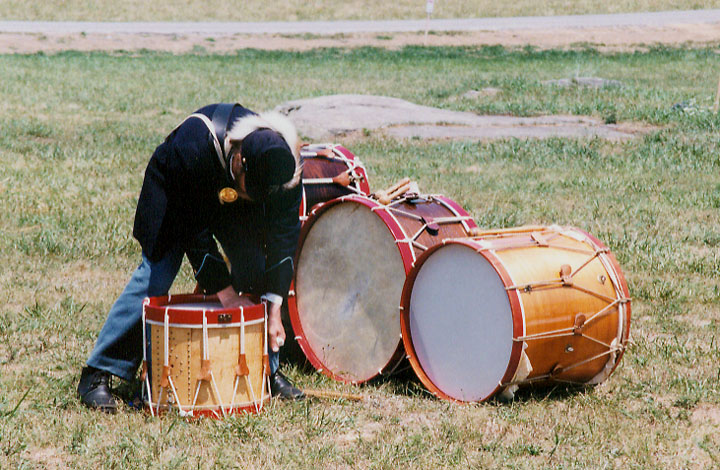 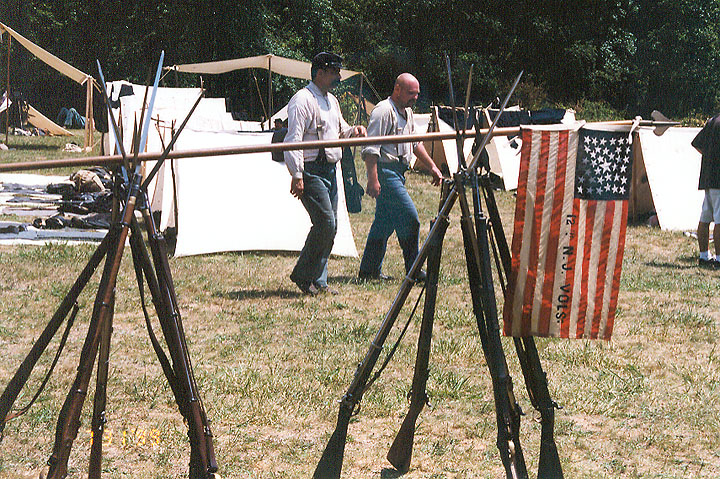 standard draped on the muskets 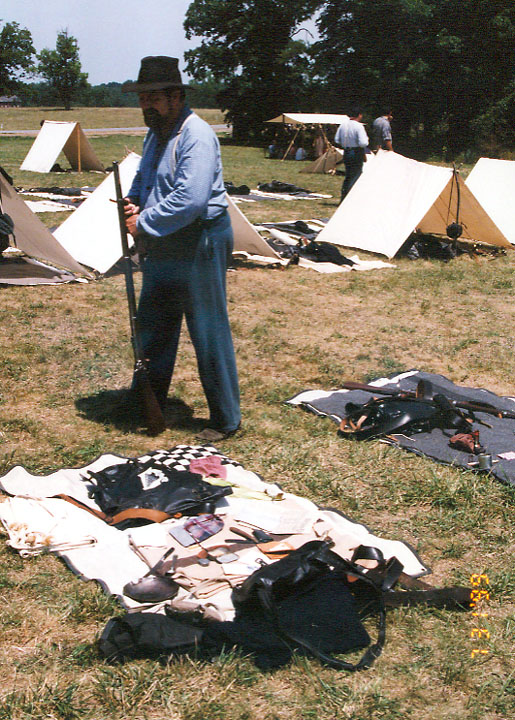