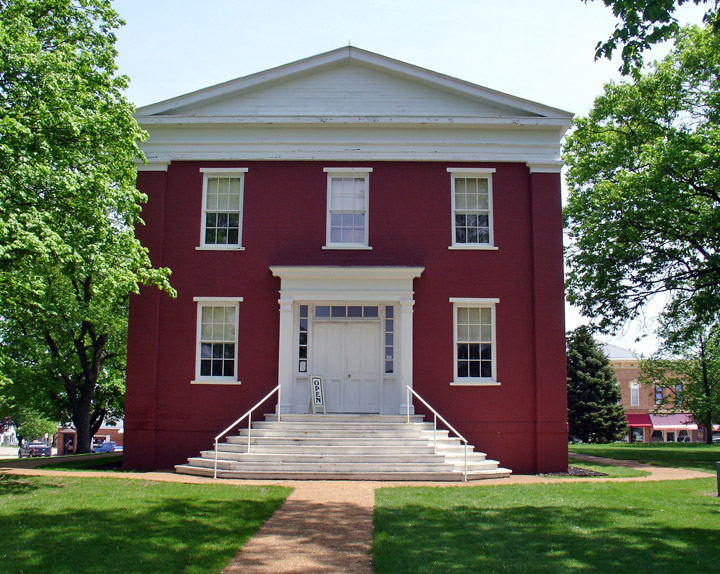 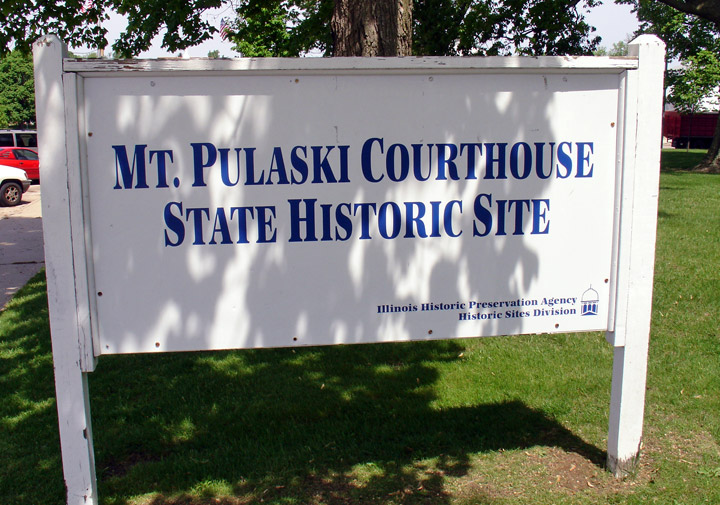 Mt. Pulaski Courthouse State Historic Site on the city square in Mt. Pulaski is one of only two surviving Eighth Judicial Circuit courthouses in Illinois where Abraham Lincoln practiced law. Constructed in 1848, the courthouse housed sessions of the twice—yearly circuit court from 1848 to 1855. Restored in the 1930s. the courthouse is today administered by the Illinois Historic Preservation Agency. 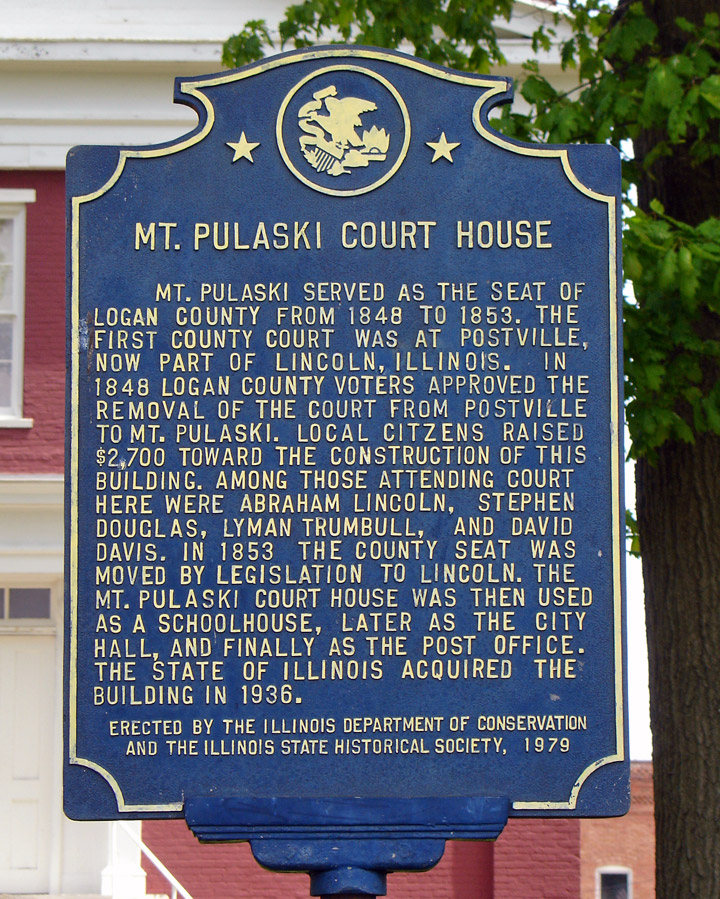 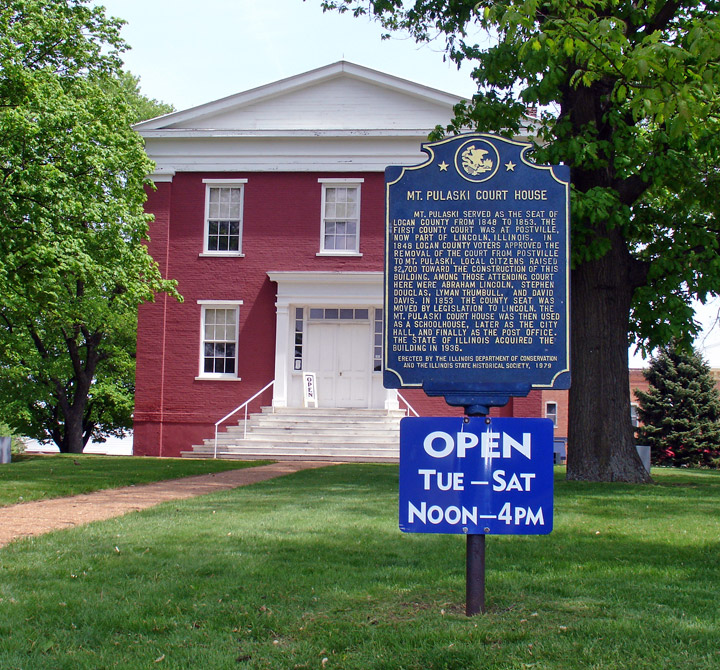 Mt. Pulaski was founded in July 1836 by Jahez Capps, Dr. Barton Robinson, George Jurley, and others, who named the thriving community for Revolutionary War hero Casimir Pulaski. When Logan County was created in 1839, three towns—Mt. Pulaski, Middletown. and Postville—vied for the county seat. Postville (later absorbed by the city of Lincoln), in the center of the new county, was chosen as the new seat of government. 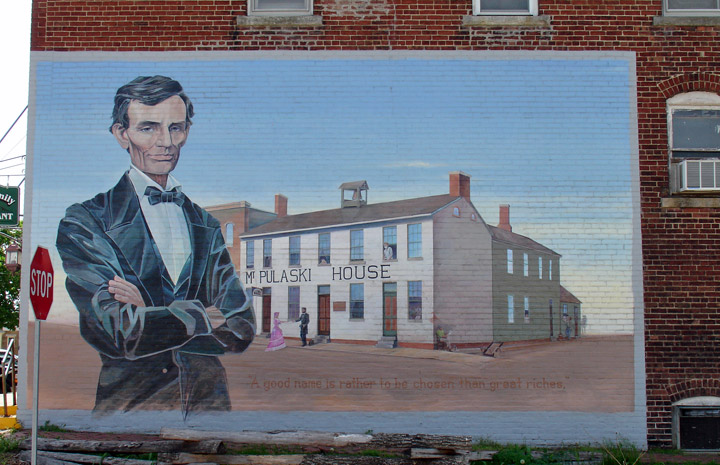 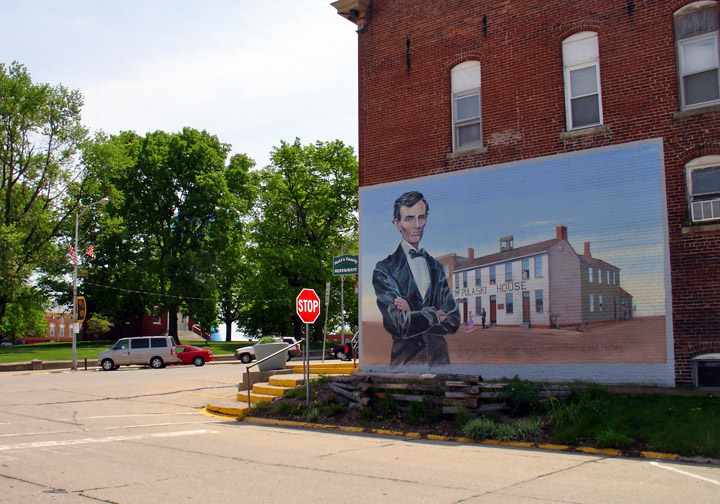 across the street from the Courthouse

By the mid—1840s Mt. Pulaski was the largest and busiest town in Logan county, and local boosters campaigned to have the county seat relocated from Postville. An April 1848 referendum decided the issue: Mt. Pulaski won, the electorate swayed no doubt by the city's pledge to build a larger and finer courthouse. The citizens of Mt. Pulaski contributed $2,700 towards the construction of a two-story, brick, Greek Revival courthouse, with the county adding $300 to finish it. County officials moved into the new courthouse before the end of 1848. 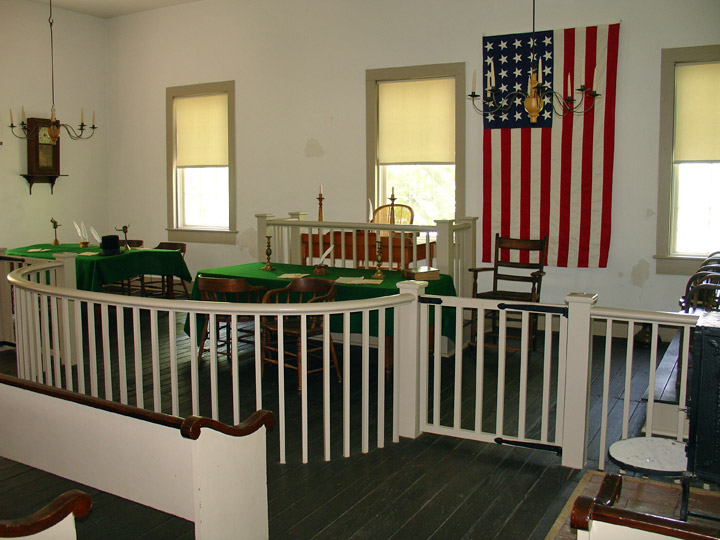 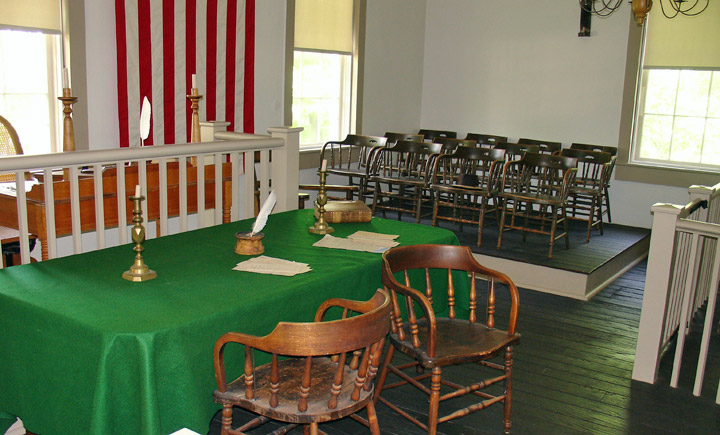 In the early 1850s the railroad came to central Illinois and Logan County but not to Mt. Pulaski. In 1853 the new town of Lincoln, eleven miles to the northwest of Mt. Pulaski, was founded. Located on the new railroad and in the center of the county, Lincoln soon eclipsed Mt. Pulaski. A referendum in November 1853 prompted the relocation of the county seat to Lincoln, and within two years county and circuit court business was being conducted there in the new courthouse. 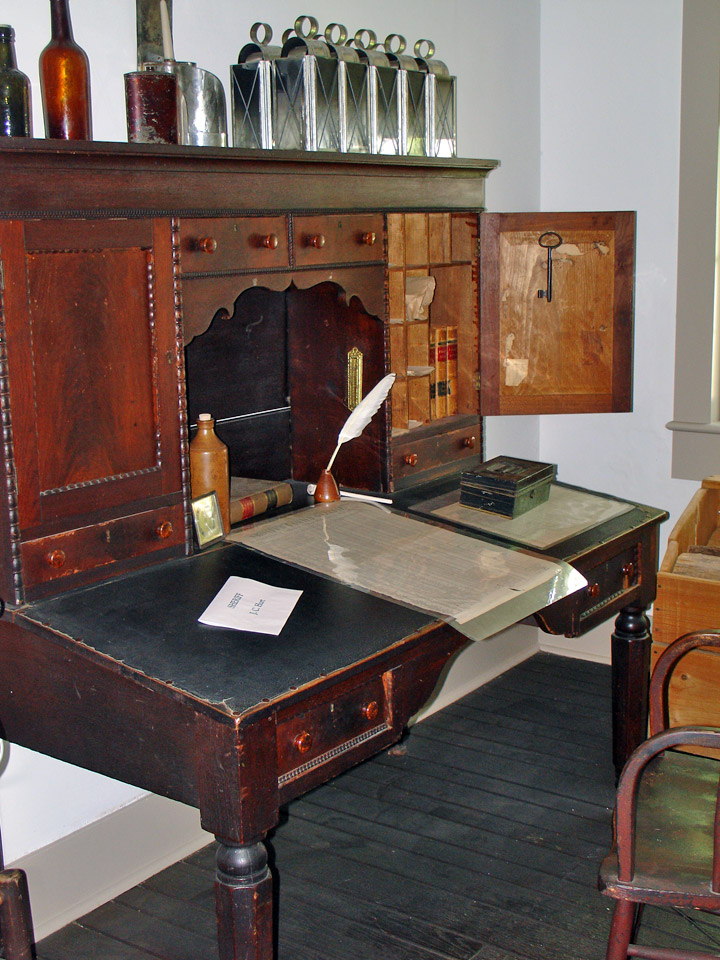 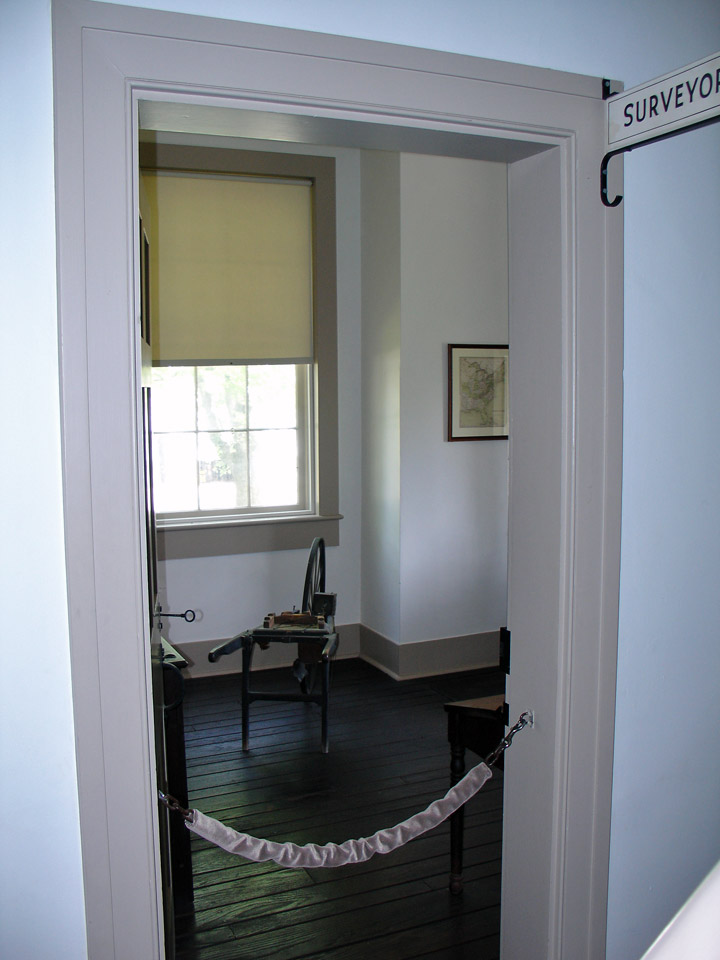 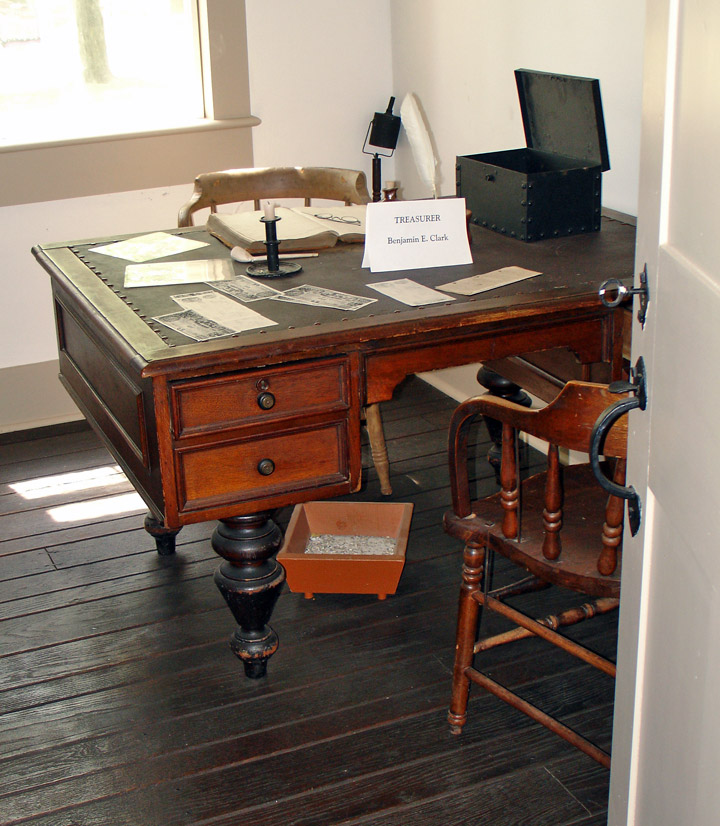 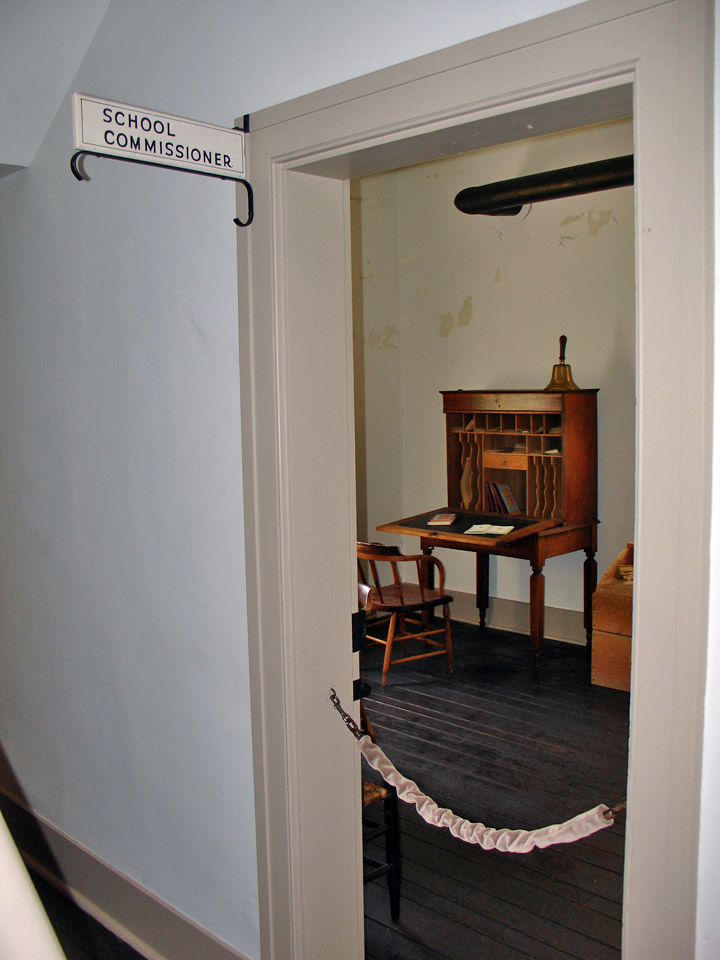 During the years the building served as a courthouse, Citizens conducted business with county officials in six offices on the first floor or attended circuit court on the second floor. Residents registered deeds or registered to vote in the county clerks office: checked on estravs with the sheriff; asked about property lines at the Surveyors office; paid taxes or received payment from the treasurer; conducted legal matters with the circuit clerk: or checked on local education in the school commissioner’s office. 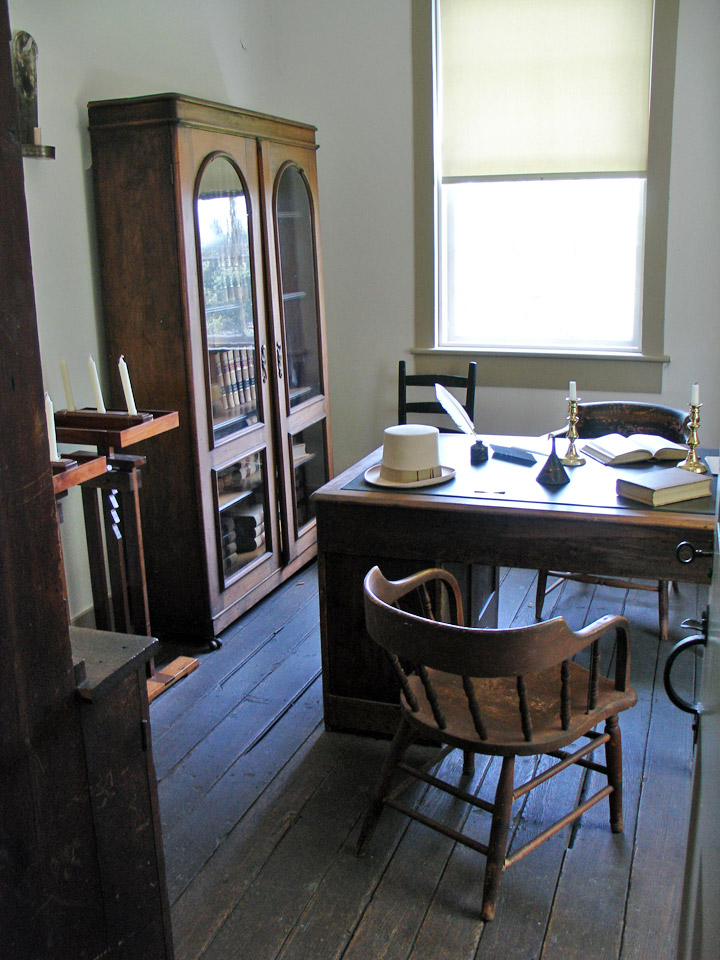 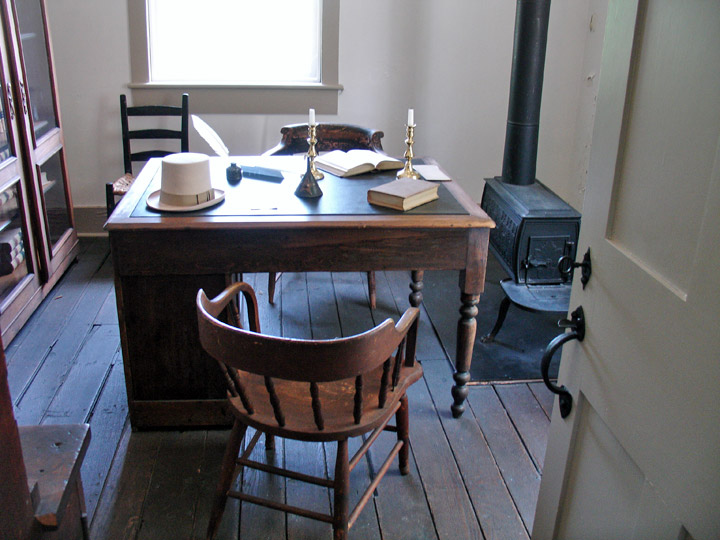 where they conferred with the Judge 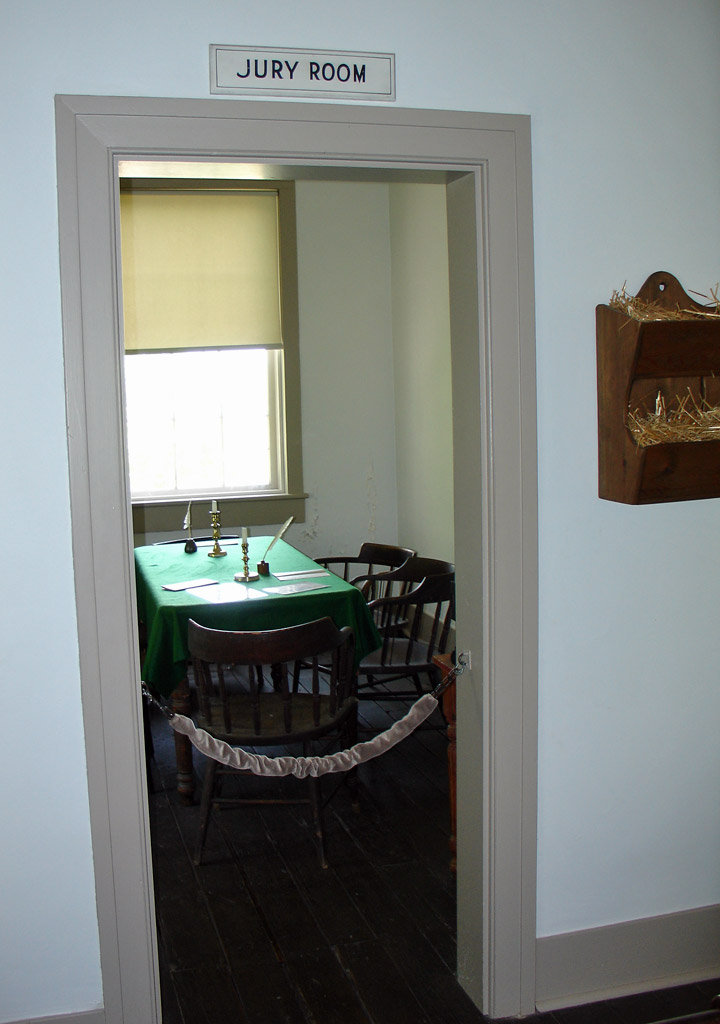 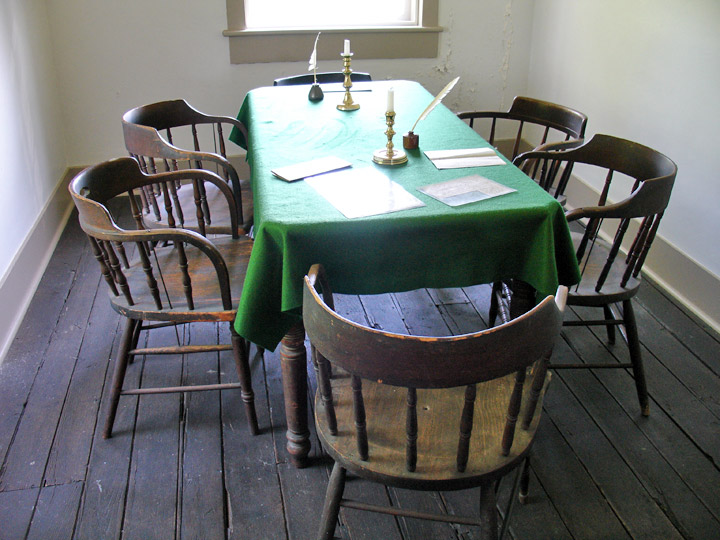 where they considered the evidence

The Eighth Judicial Circuit Court met in the second floor courtroom twice a year. in April and in the early fall. Judge David Davis, of Bloomington, presided over court during the Mt. Pulaski years. Reflecting the circuit’s rural nature and small population, the cases were generally civil with a small number of criminal cases. Matters argued before Judge Davis included boundary disputes, indebtedness, breach of contract, and occasionally slander, libel, and minor crimes. 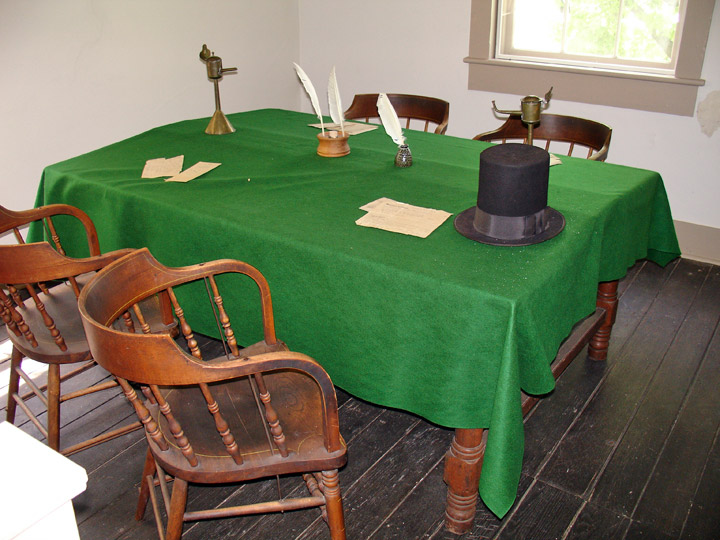 Abraham Lincoln, like most lawyers of his day, traveled the circuit to make a living. Most communities were too small and with insufficient  legal business to support resident lawyers. Simple, low-paying cases presented in large numbers at the twice-yearly circuit court terms dominated the legal work. 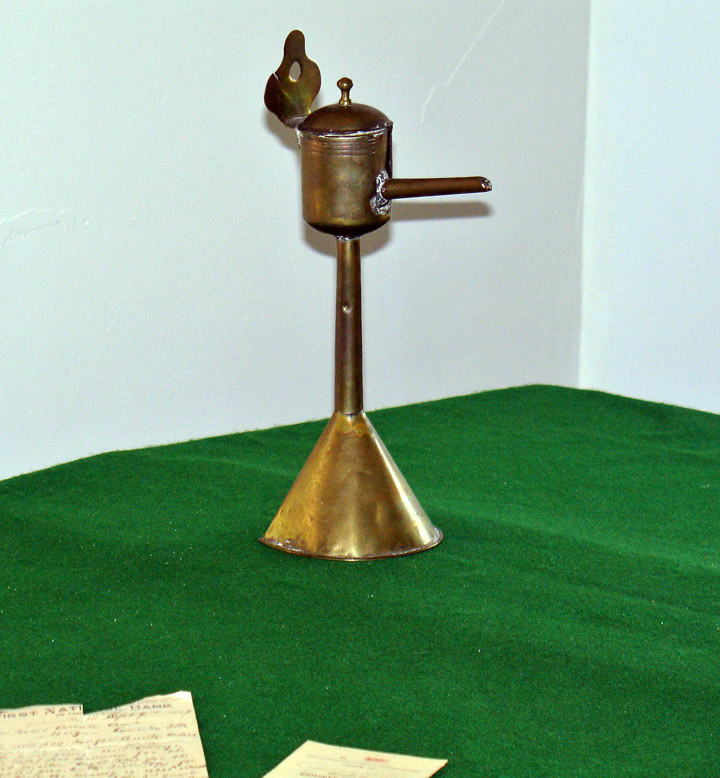 When Lincoln first came to Mt. Pulaski Courthouse in 1848 he was senior partner to associate William Herndon in their Springfield law firm. Lincoln’s growing ability and reputation helped fuel his political career. After one term (1847— 1819) in Congress. Lincoln returned to his law practice with renewed vigor. 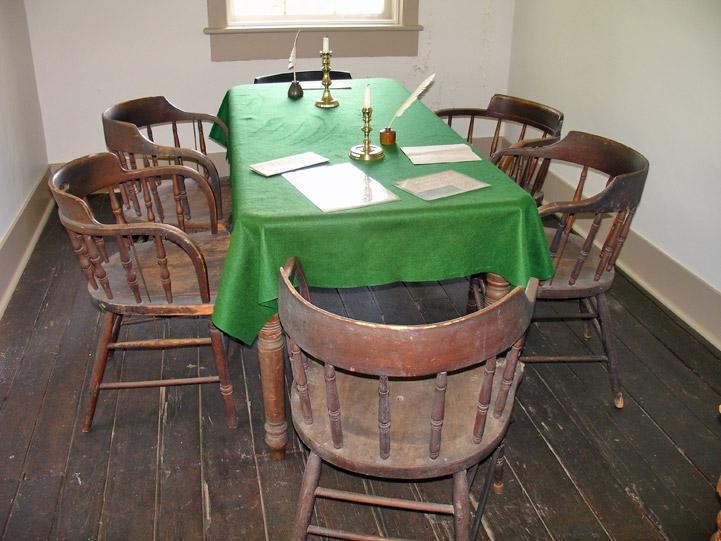 where the Jury decided if Mr. Lincoln won his case

Unfortunately, because an 1837 fire destroyed the court’s records, little is known of Lincoln’s legal work in Mt. Pulaski.  Lincoln handled two patent rights cases that began at Mt. Pulaski and were later decided by the state supreme court.

Two years after the departure of county government, the brick courthouse was converted to a schoolhouse. For 21 years from 1857 to 1878 the building served the needs of Mt. Pulaski’s growing student population. The building underwent several changes; the main entrance stairway was changed, windows were installed at ground level, and a cupola was added, perhaps to house the large school bell cast in 1858. That bell, now located on the south side of the courthouse grounds, is a memorial to all Logan County students. 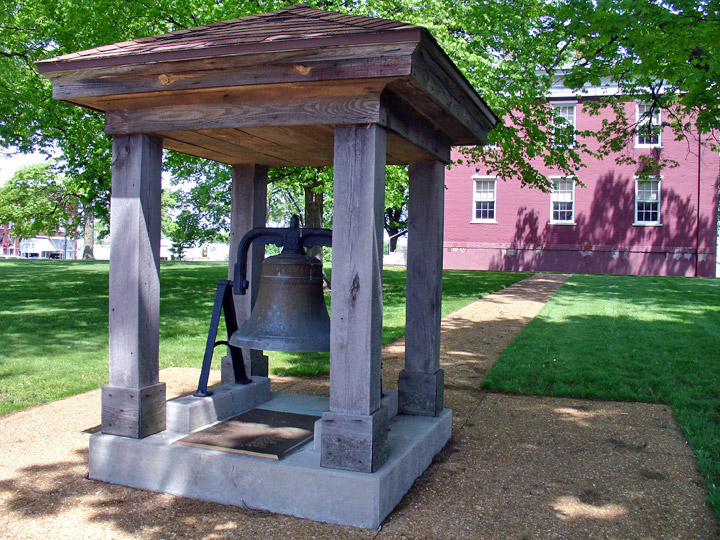 When students were moved to a new school in 1878, the old courthouse was adapted again, with a jail in the basement, city offices on the first floor, and a general meeting room on the second floor. About 1889 the first floor was drastically altered to house the towns post office. The first-floor interior was gutted and a new ground—level floor, about five feet lower than the original, was installed. New interior stairways, partitions, longer windows, and entrances were also added. The second floor continued to serve the community as a library, school, and civic center. 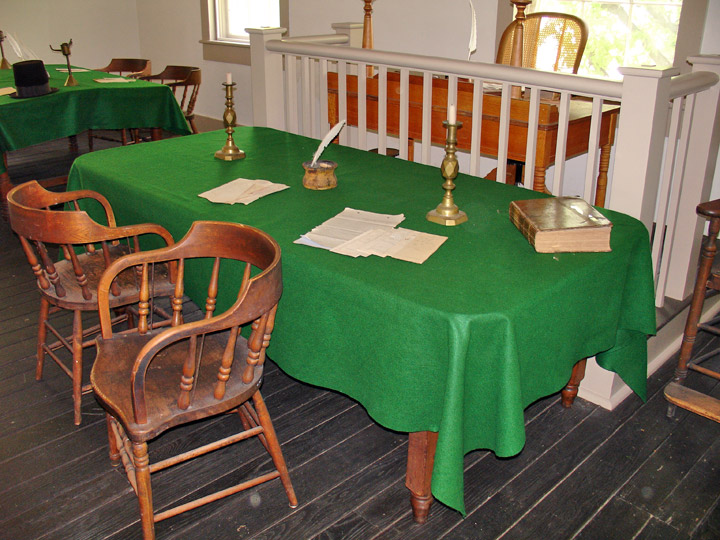 In the early 1930s the old courthouse was considered historic and part of the Lincoln tradition. In 1936 the town deeded the courthouse to the State of Illinois, and the state began an extensive restoration of the building as a memorial to Abraham Lincoln. The restoration was completed in 1939, and some period furnishings were added to the offices and courtroom. The furnishing of the historic offices continues today. 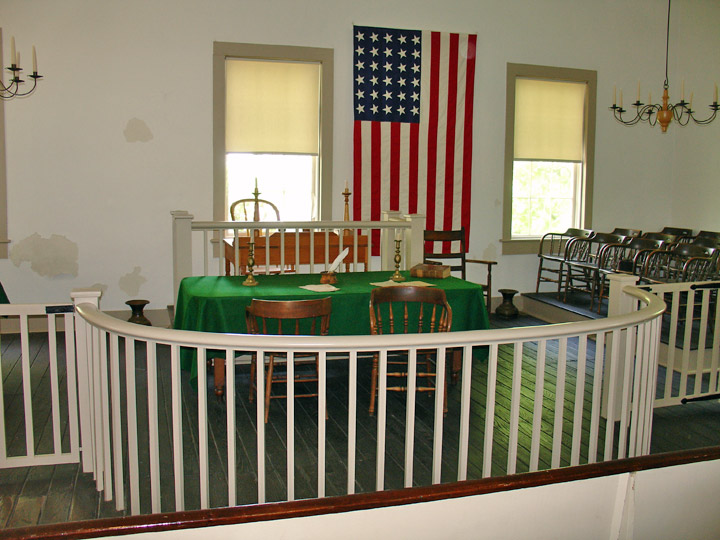 as it looks today 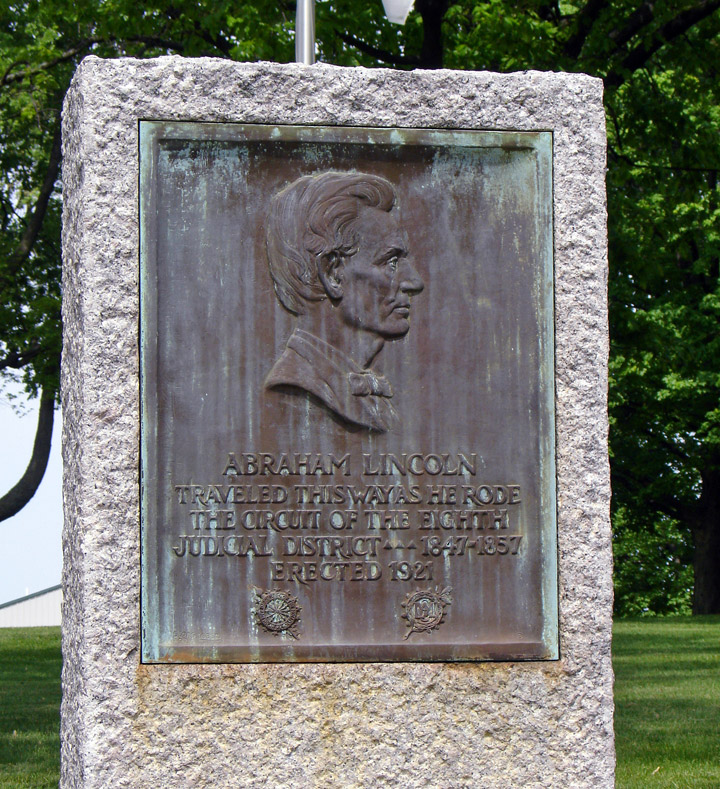