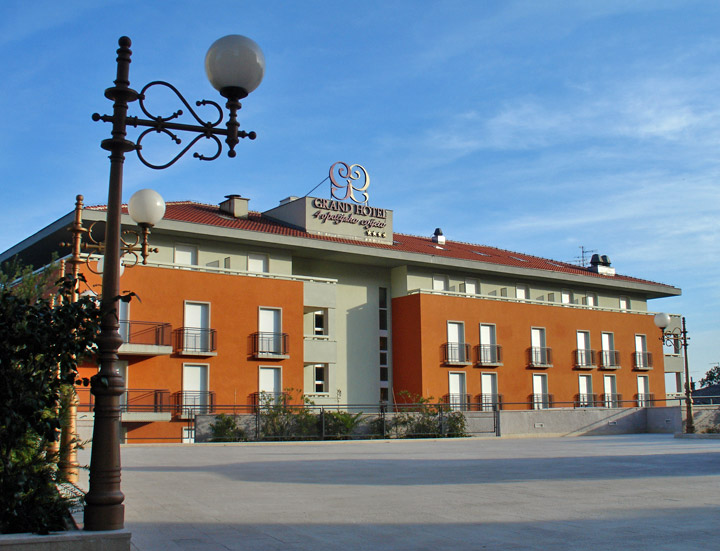 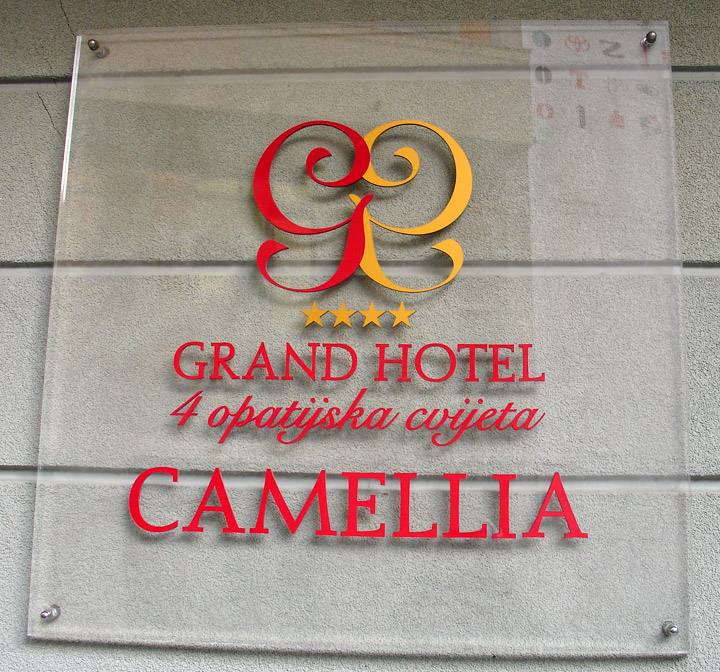 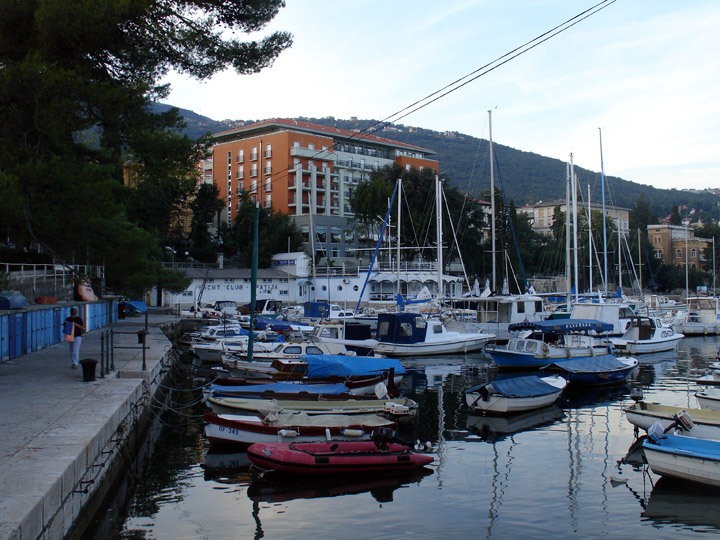 Grand Hotel on the waterfront 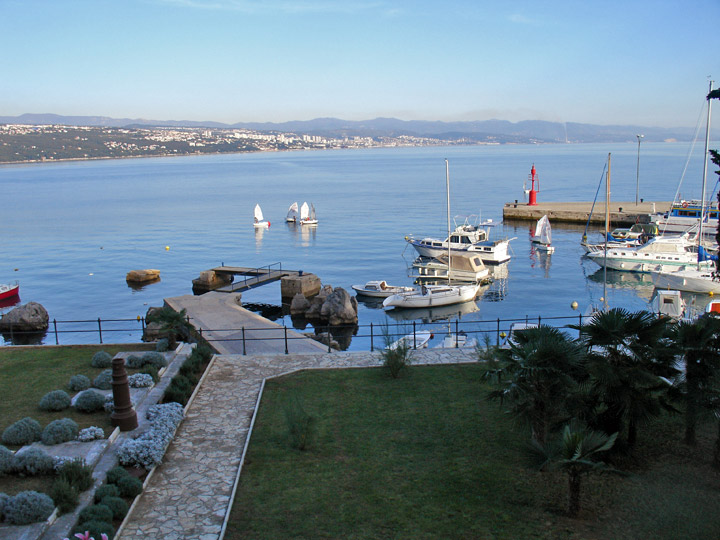 looking across the water to Rijeka 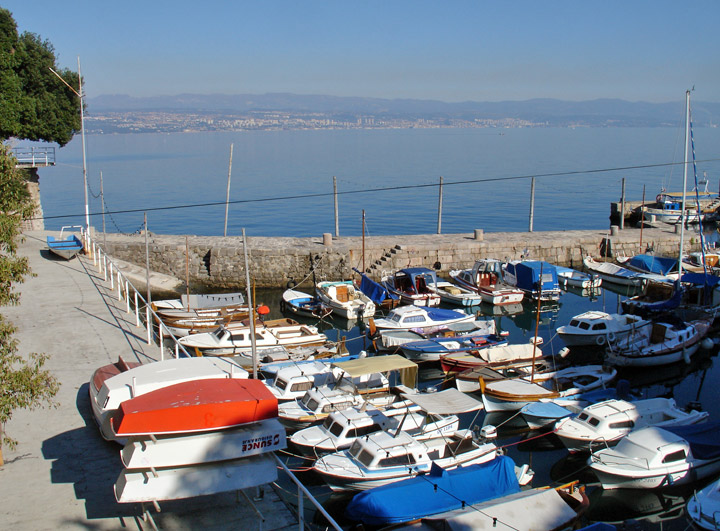 This elegant tourist destination, lies at the centre of the Riviera with the longest tradition of tourism in Croatia. The very attractive geographic position, enabling its warm seas to be quickly reached from many cities in Central Europe (only about 500 km from Milan, Vienna and Münich), lush green scenery and a pleasant climate (45° 20’ north latitude) were some of the main reasons for its beginning and the quick development of its tourism at the end of the 19th century. Built mainly at the turn of the 20th century, Opatija has remained in complete harmony with Nature right up until the present day. 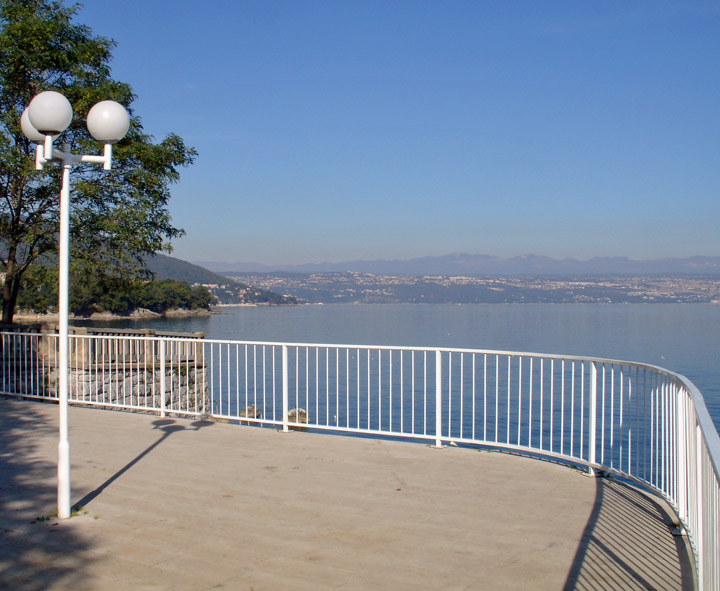 coastal promenade known as the "Lungomare"

Well-maintained public gardens, the illuminated 12-km-long coastal promenade known as the "Lungomare", well-kept beaches and fountains provide a stunning backdrop for the villas and hotels that cater comfortably for up to 6,000 guests. Due to a relatively constant temperature (winter average 7.0 °C, summer average 21.9 °C), high air pressure and constant circulation of air, the climate in Opatija is relaxing and refreshing. The contrasts of sea and mountains, green parks and blue ocean, old buildings and modern comforts, noisy entertainment venues and quiet destinations for excursions all combine to make Opatija and its surroundings a very attractive tourist resort at any time of the year. 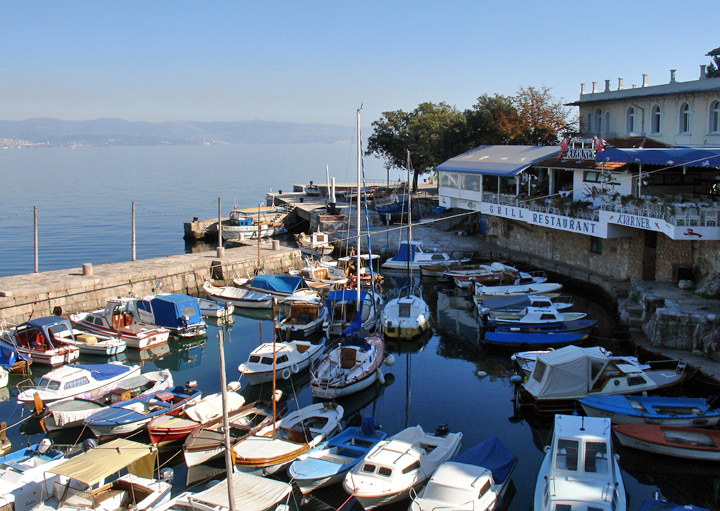 restaurant on the harbor 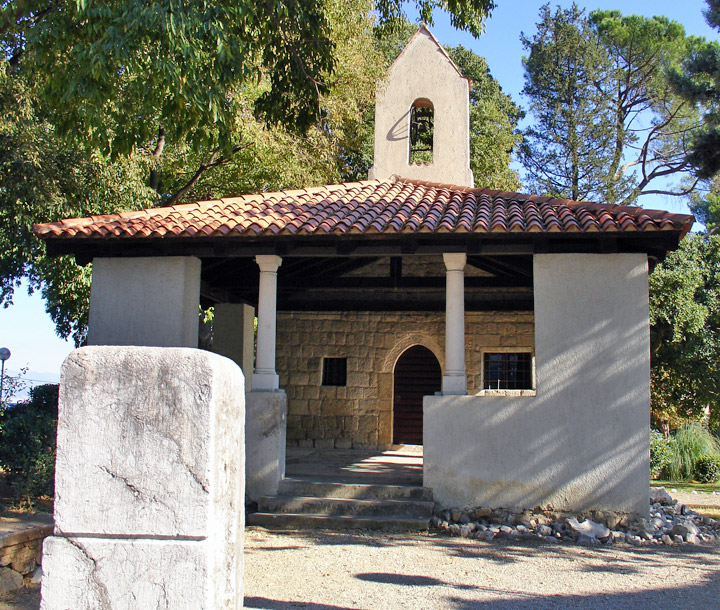 The characteristics of the climate have all the traits of a gentle Mediterranean climate with a warm sea, lots of sun and lush vegetation which paints a picture of Opatija as a kind of green oasis. Summer temperatures are relatively low because of the cool breezes to come from the Ucka mountains while in winter, the temperature is relatively high. 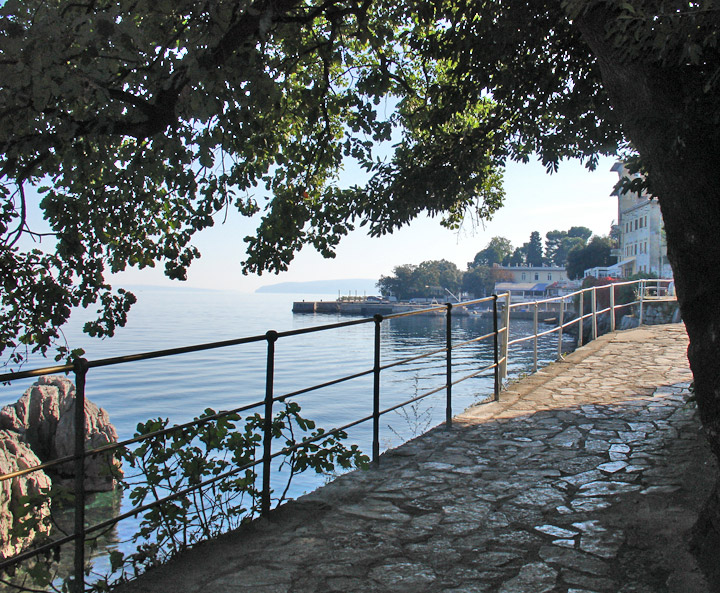 Built in phases, this path stretches from Preluka to Lovran and its total length is approximately 12 kilometers. The initiator of the operation was the Scenic Improvement Society (Abbazianer Verschönerungsverein), and the conductors of the works were Heinrich Gintl, Alfred Manussi and Konrad Rubbia. They were confronted with great land Lungomare (Seaside Promenade) purchasing problems and countless disputes had to be settled through the authority of Jettmar, the county captain. 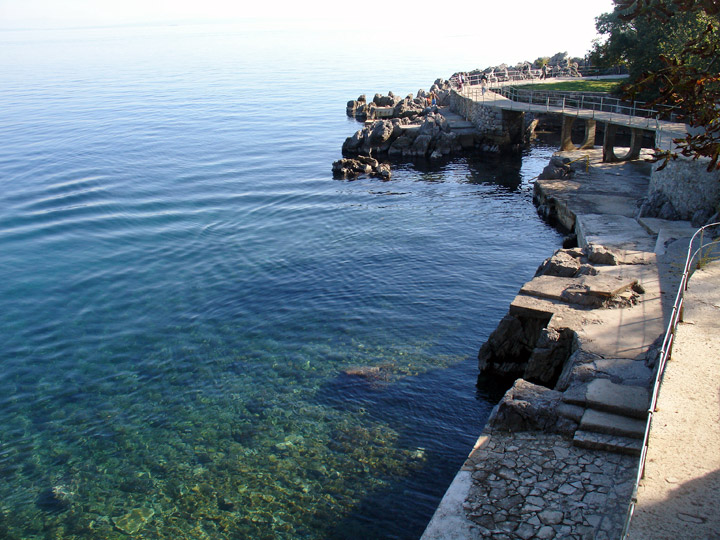 The first, northern phase of the path (Volosko-Slatina) was completed in 1889, when Opatija officially becomes a Health Resort (the stretch from Dražice to the port was finished around 1888), and the southernmost section (that connected Opatija with the promenade in Lovran) only around 1911, thanks to the commitment of physician Julius Hortenau. Planned as an important trump card for health tourism, this path, together with the parallel woodland path in the town’s hinterland (today’s Carmen Sylva Promenade) is a potential of psychophysical recreation that is indeed insufficiently exploited. 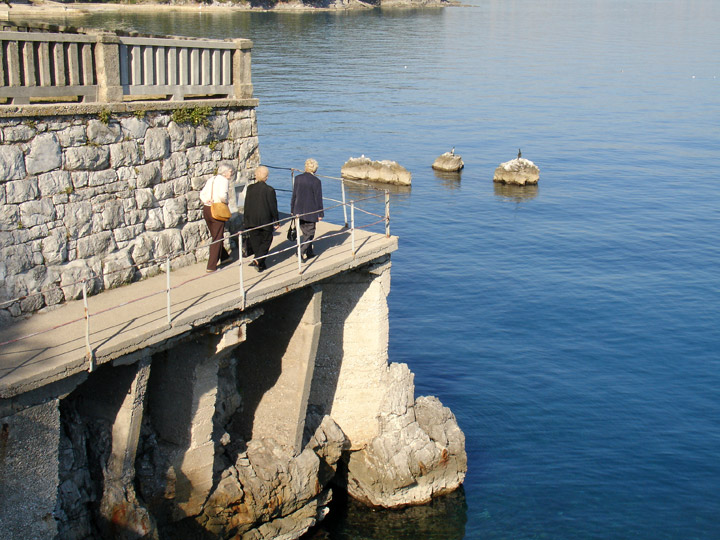 In addition to this, the Promenade passes by most of the significant structures of Opatija’s history, linking the old sanatoriums of the North Strand, the port, Lido, villas Angiolina and Amalia, hotel Kvarner, St. Jacob’s church and finally the hotels with the villas of the South Strand. One of the highest points above sea level is the Grotta del Diavolo (Teufelsbrunnen) near the residence of the consul of Venezuela. Some features of the seaside promenade have been lost: the bust in honor of Admiral Littrow on the North Strand is gone, the Dr. Masarei footbridge has disappeared – replaced by the reconstructed path in front of hotel Admiral. 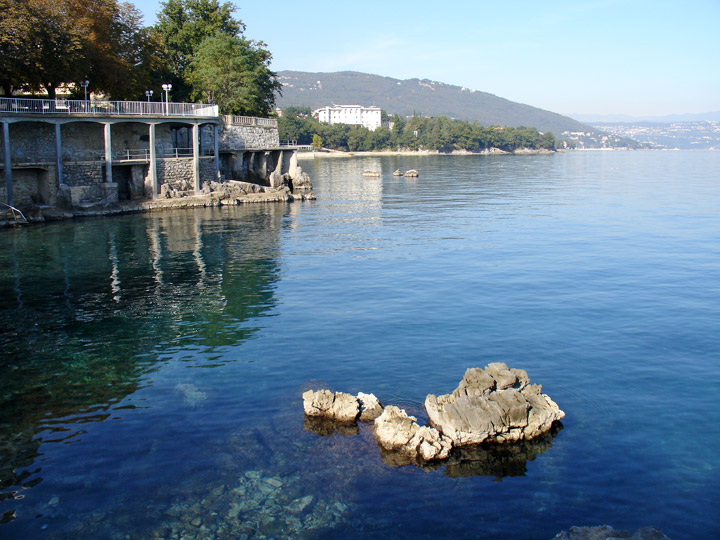 Again, there are points that have changed only, in appearance, location or through use: Schwerdtner’s relievo of Billroth made in 1907, with the inscription Dem großen Arzt und Förderer des Kurortes (“To a great physician and promoter of the health resort”), was destroyed in World War II, and Dolinar’s new one, with the inscription “An outstanding surgeon and a friend of Opatija,” was erected in 1965 several meters further to the south, on the chapel wall. Rathausky’s bust of Schüler (Rathausky is also the sculptor of the Helios and Selene fountain in front of the Imperial and of the Madonna del Mare, now located in front of St. Jacob’s church) once stood on the seaside promenade in front of hotel Kvarner, and today it stands in the Angiolina Park among the bananas. Finally, there are newly erected symbols, such as the memorial tablet to Pilsudski in the Sv. Jakov Park, not far from the Maiden with a seagull. 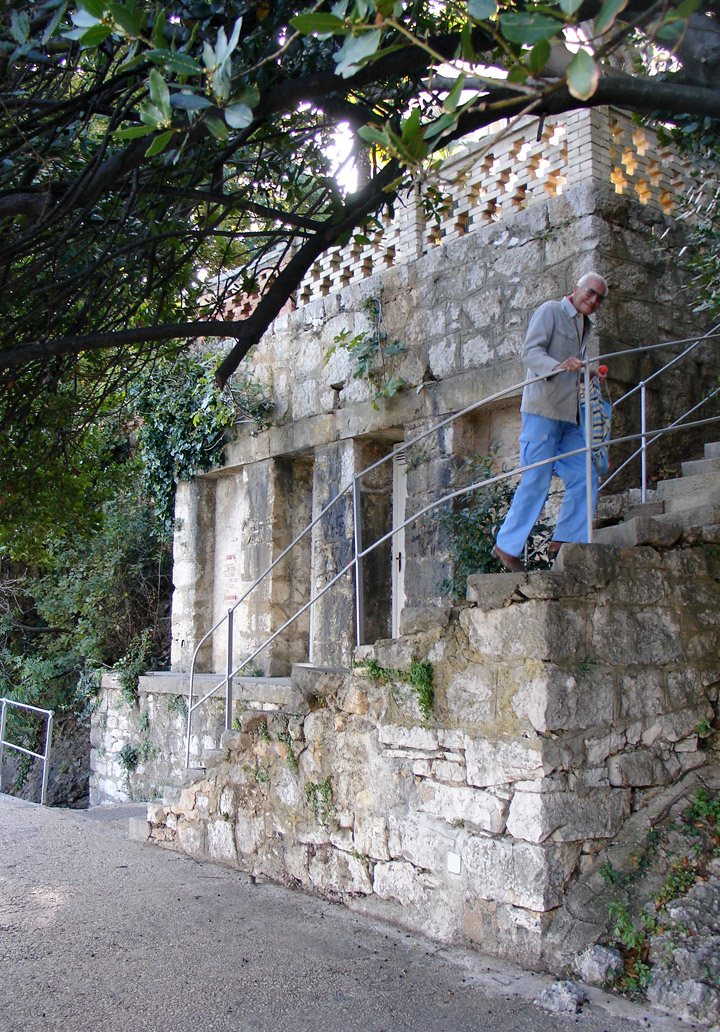 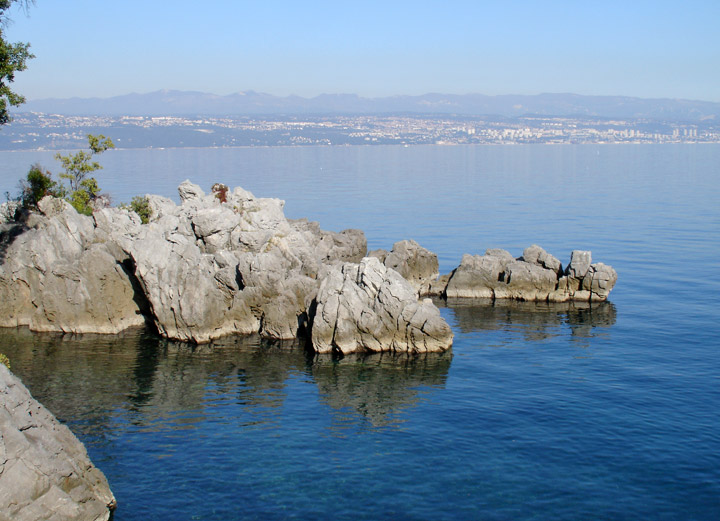 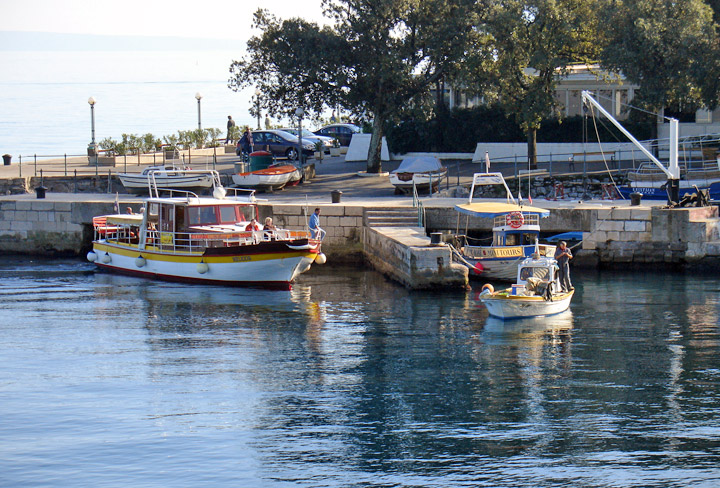 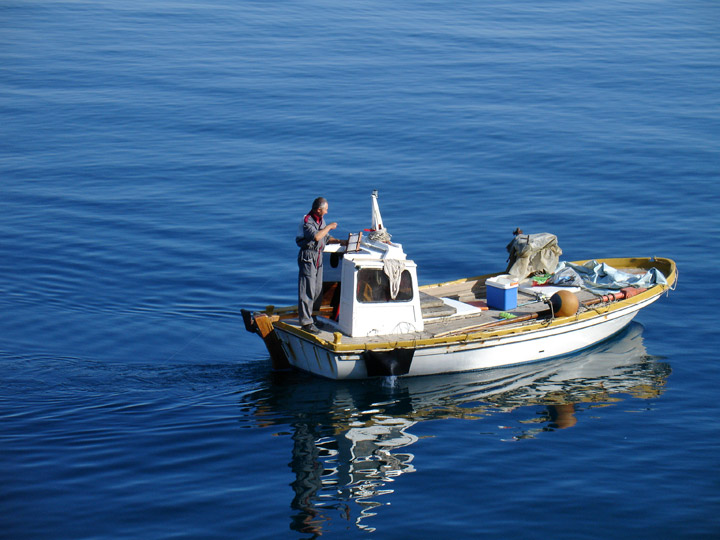 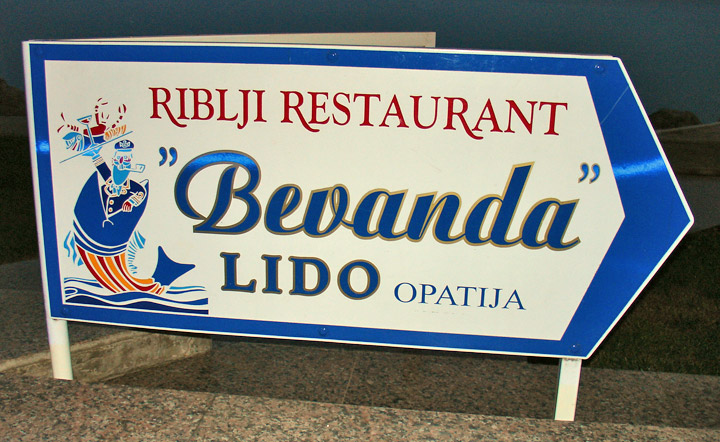 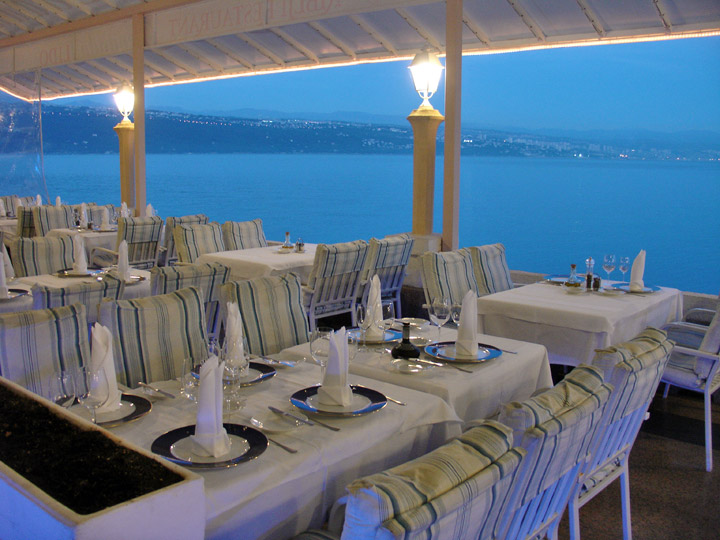 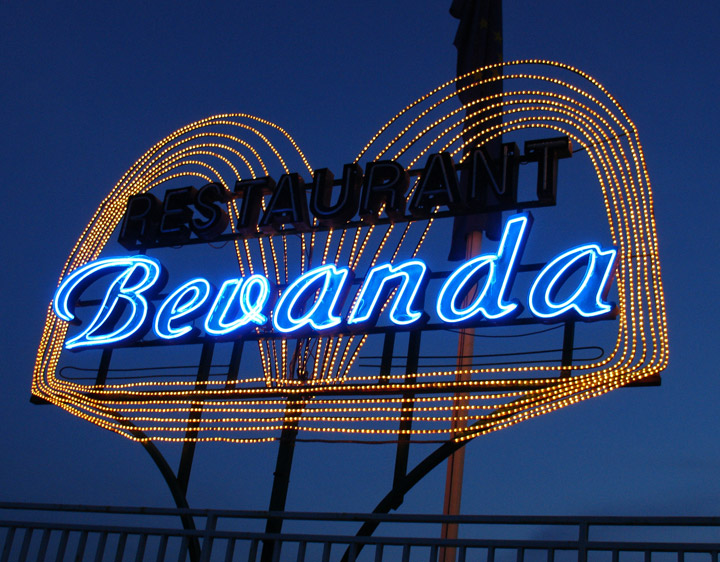