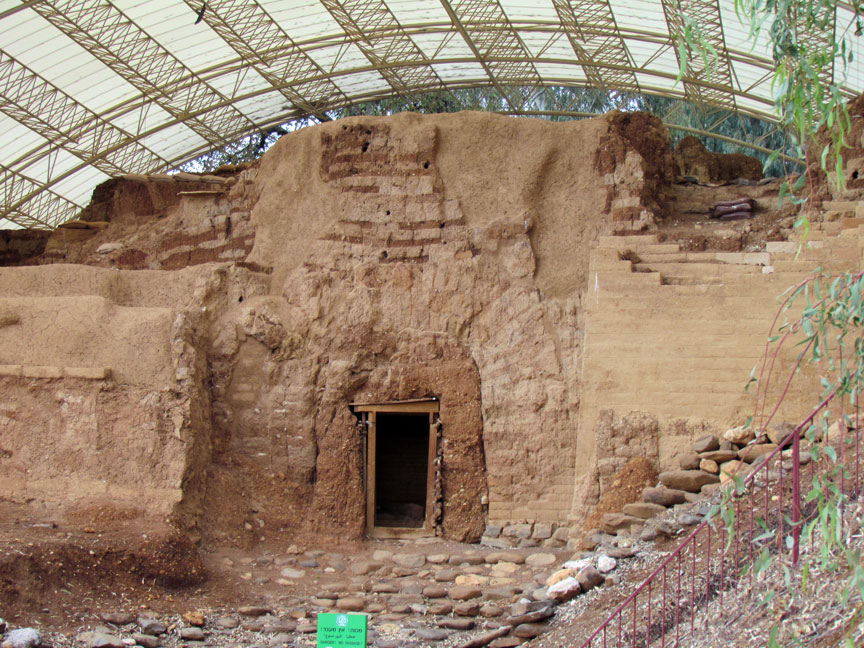 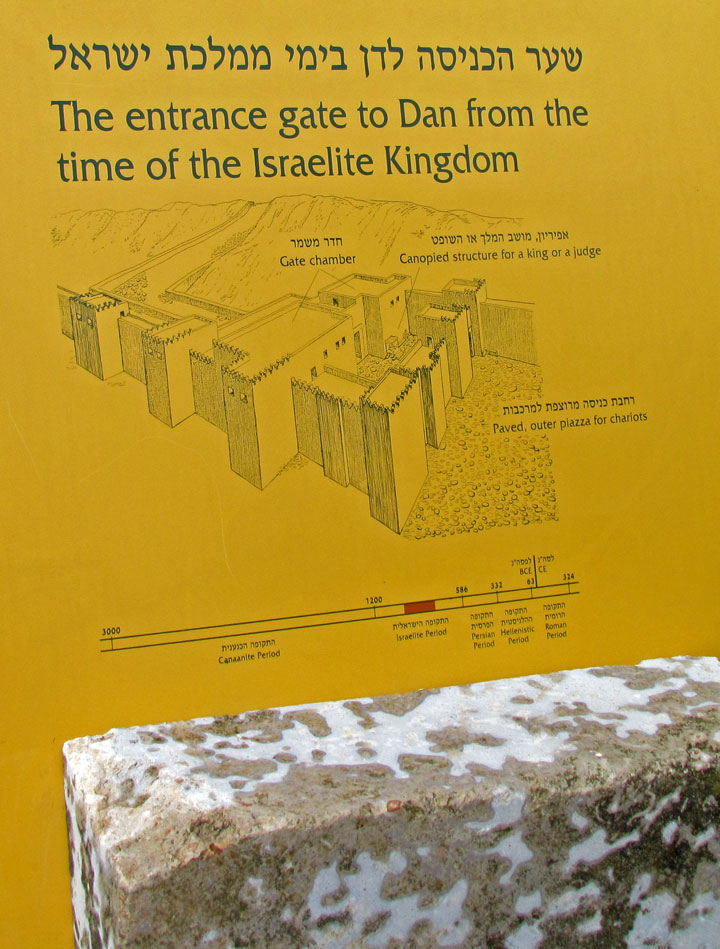 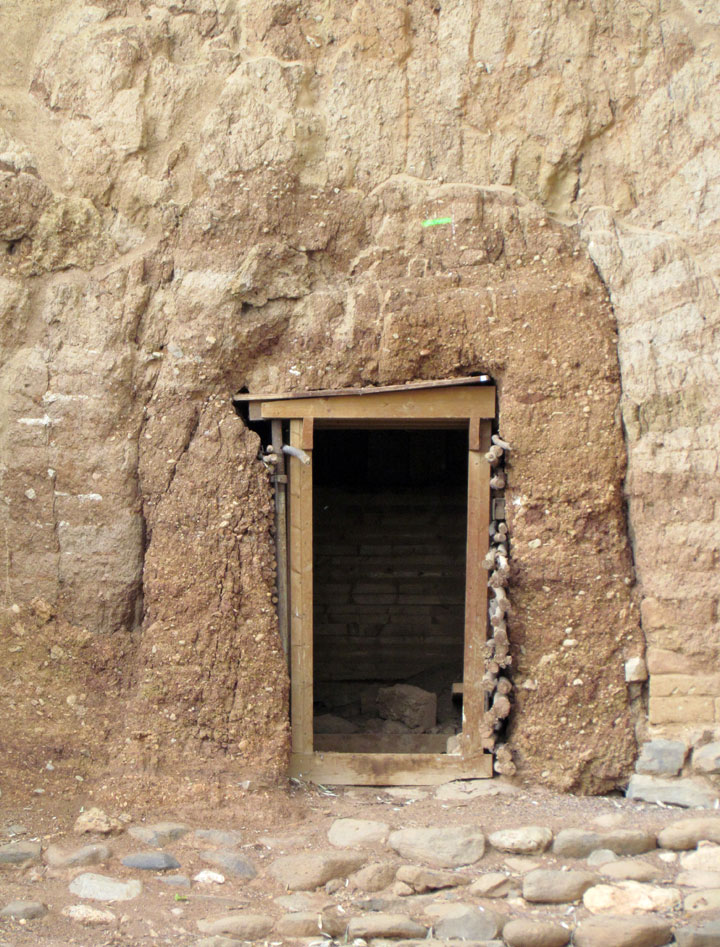 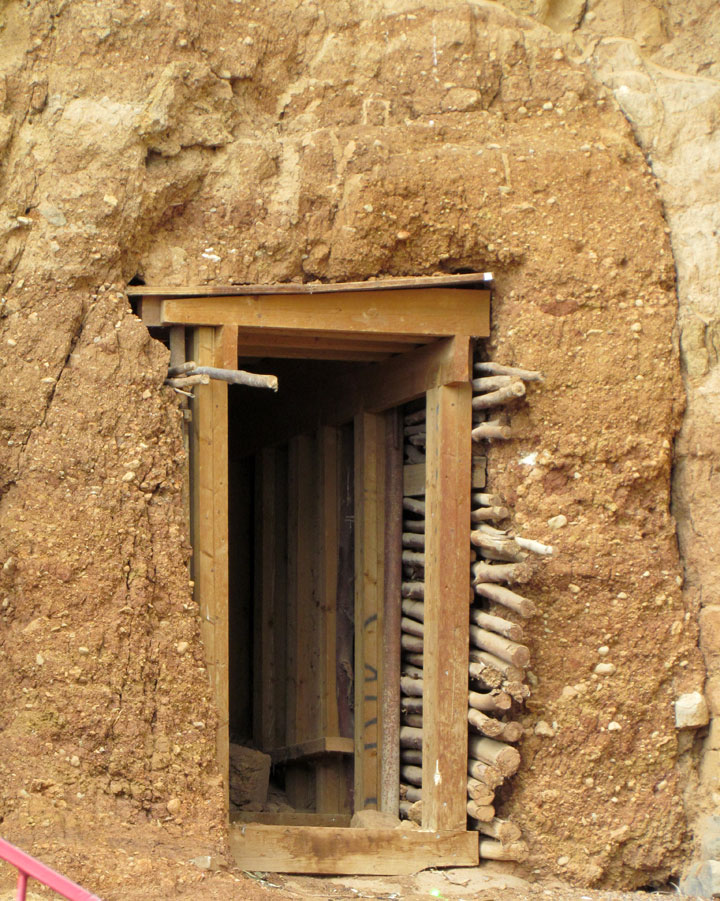 Dan (Hebrew: דן‎), is a city mentioned in the Bible, described as the northernmost city of the Kingdom of Israel, belonging to the Tribe of Dan. The city is identified with the tel known as Tel Dan ("Mound of Dan" תל דן in Hebrew), or Tel el-Qadi ("Mound of the Judge" in Arabic, تل القاضي, literal translation of the Hebrew name Tel Dan, "Dan" meaning "judge", or "one who judges") in Israel. 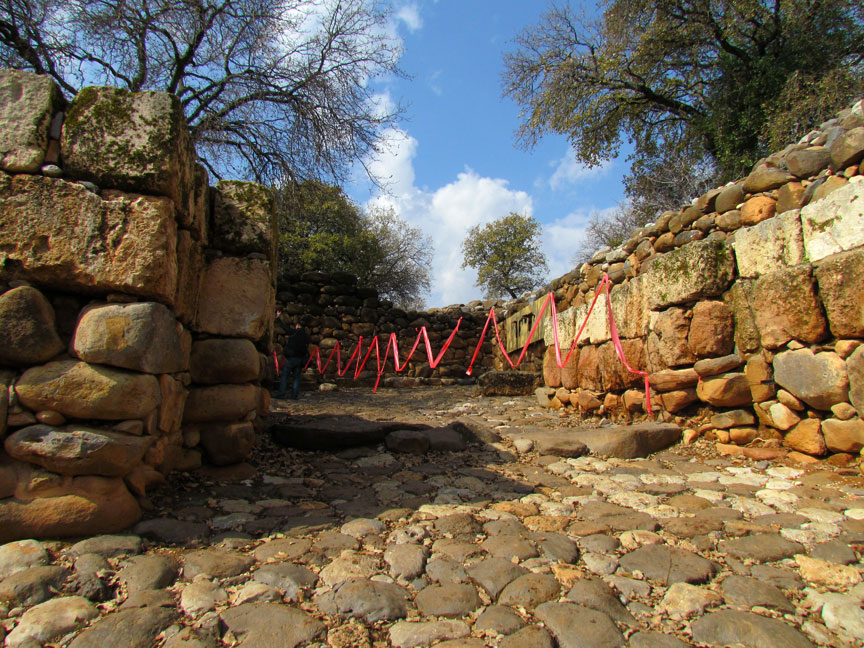 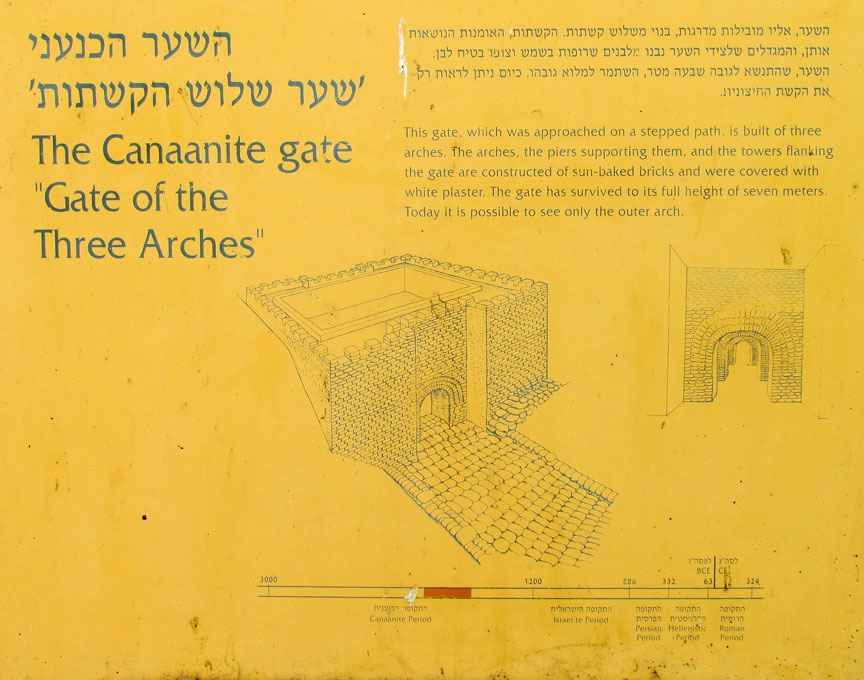 Dan was first identified by Edward Robinson in 1838, and has been securely identified with the archaeological site of Tel Dan, which the Book of Judges (Judges 18:27-29) states was known as Laish prior to its conquest by the Tribe of Dan, whereas in Joshua 19:47 it is called Leshem. 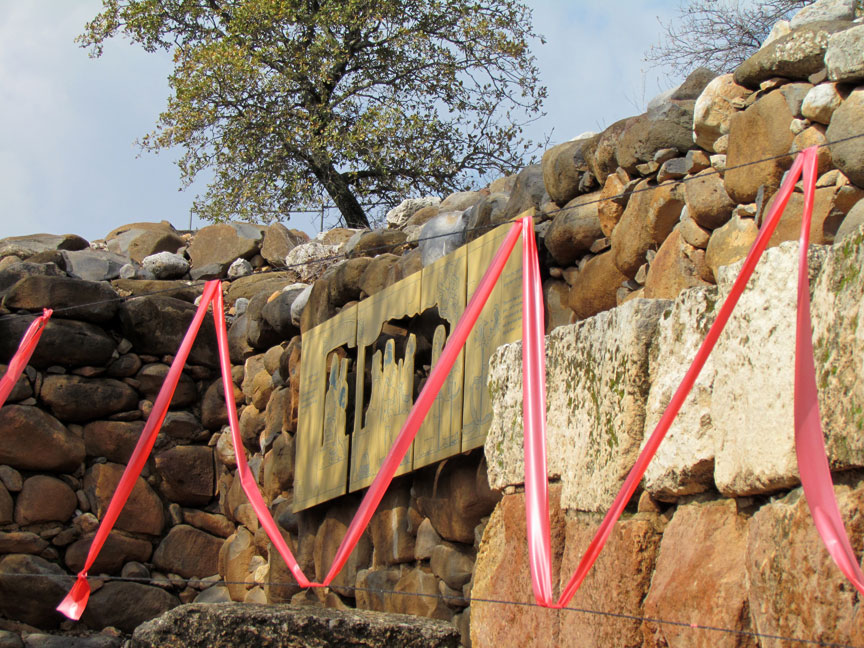 Dan is situated in Israel, in the area known as the Finger of the Galilee. To the west is the southern part of Mount Lebanon; to the east and north are the Hermon mountains. Melting snow from the Hermon mountains provides the majority of the water of the Jordan River, and passes through Dan, making the immediate area highly fertile. The lush vegetation that results makes the area around Dan seem somewhat out of place in the otherwise arid region around it. Due to its location close to the border with Lebanon and at the far north of the territory which fell under the British Mandate of Palestine, the site has a long and often bitterly contested modern history, most recently during the 1967 Six-Day War. 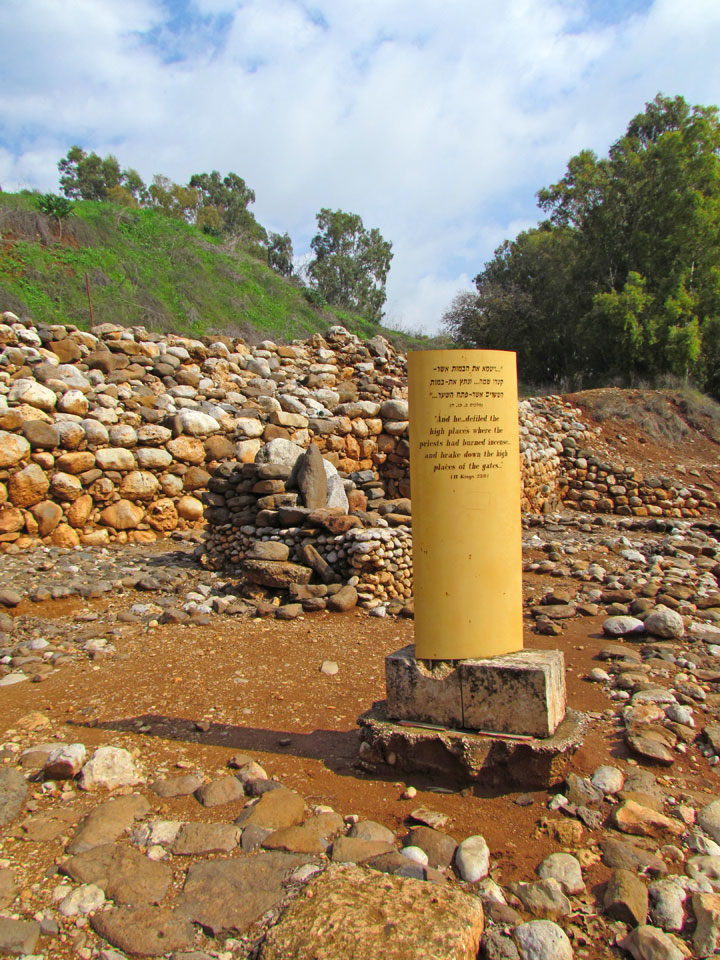 According to the archaeological excavations at the site, the town was originally occupied in the late Neolithic era (c 4500BCE), although at some time in the fourth millennium BCE it was abandoned, for almost 1000 years. 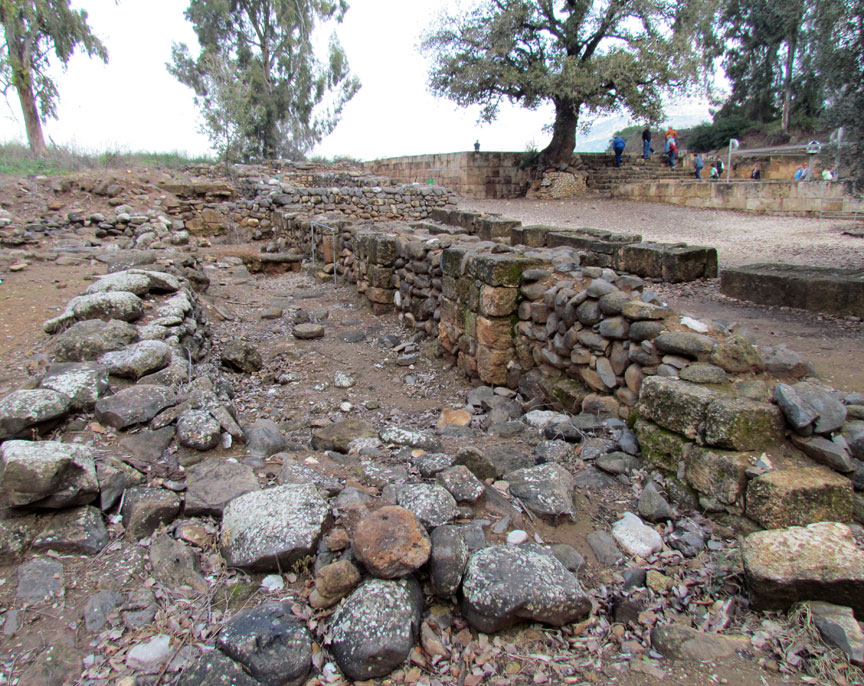 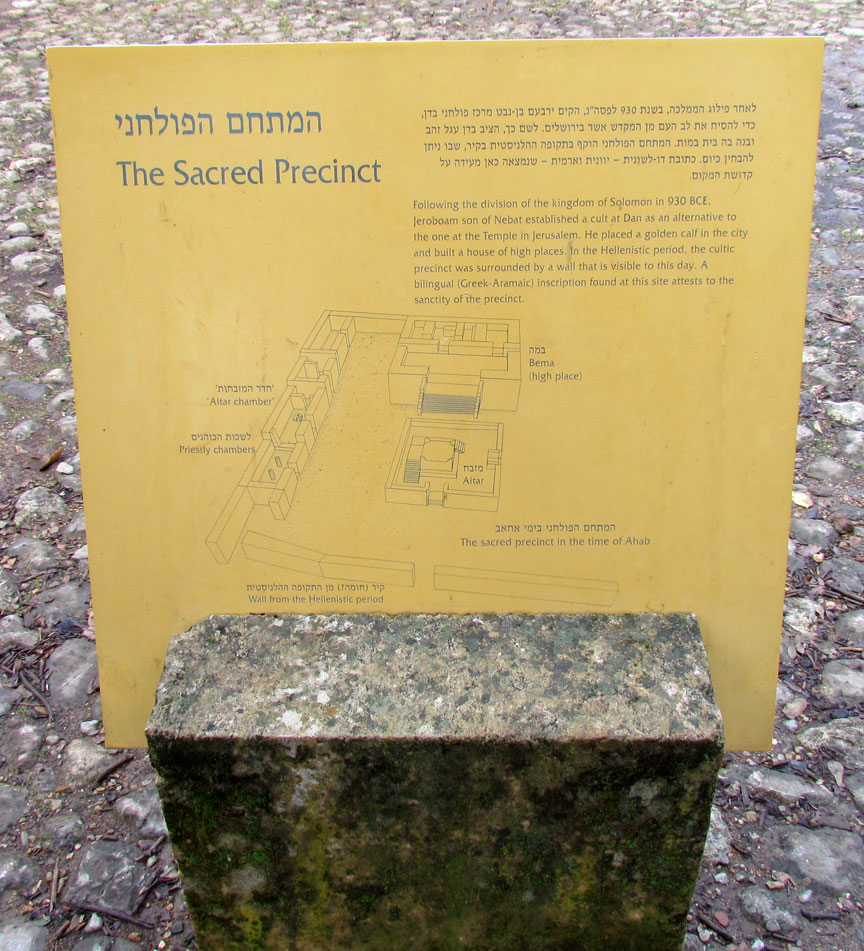 According to the Book of Judges, prior to the Tribe of Dan occupying the land, the town was known as Laish, and allied with the Sidonians; This might indicate they were Phoenicians (Sidonians were Phoenicians from the city of Sidon), who may or may not have been Canaanite. The alliance had little practical benefit due to the remoteness of the town from Sidon, and the intervening Lebanon mountains. The town was also isolated from the Assyrians and Aram by the Hermon mountains; the Septuagint mentions that the town was unable to have an alliance with the Aramaeans. The masoretic text does not mention the Aramaeans, but instead states that the town had no relationship with any man - textual scholars believe that this is a typographic error, with adham (man) being a mistake for aram. 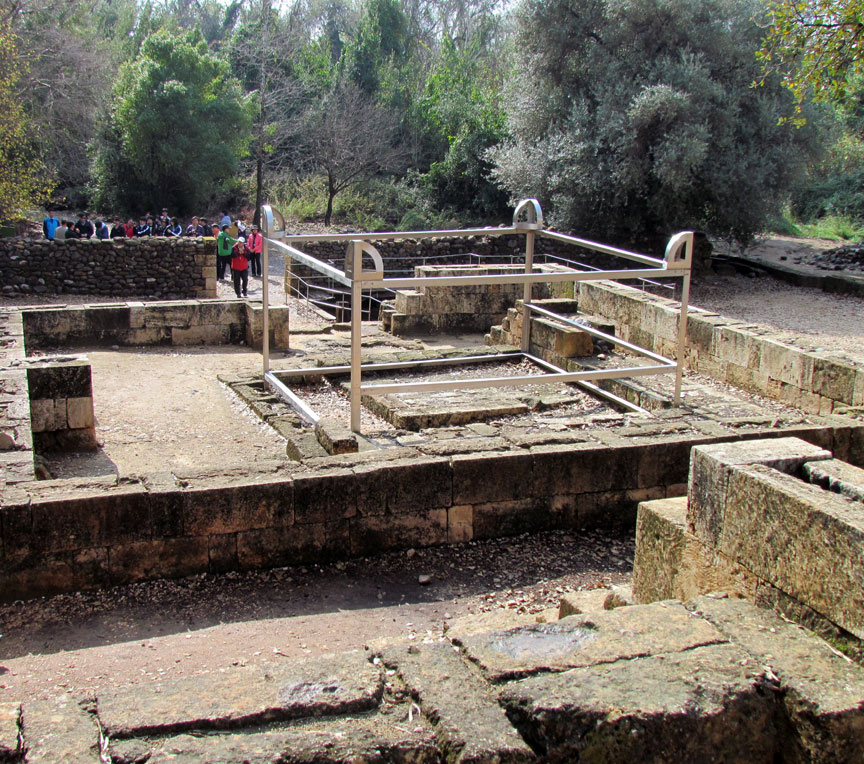 According to the narrative in Judges concerning Micah's Idol, the Tribe of Dan did not at that point have any territory to their name (Judges 18:1), and so, after scouting out the land, eventually decided to attack Laish, as the land around it was fertile, and the town was demilitarised. Most Biblical scholars now believe that the Tribe of Dan originated as one of the Sea Peoples, hence remaining on their ships in the early Song of Deborah, and not having Israelite land to their name, though conservative scholars argue that the Tribe of Dan migrated because they were forced out of their original lands by the Philistines. 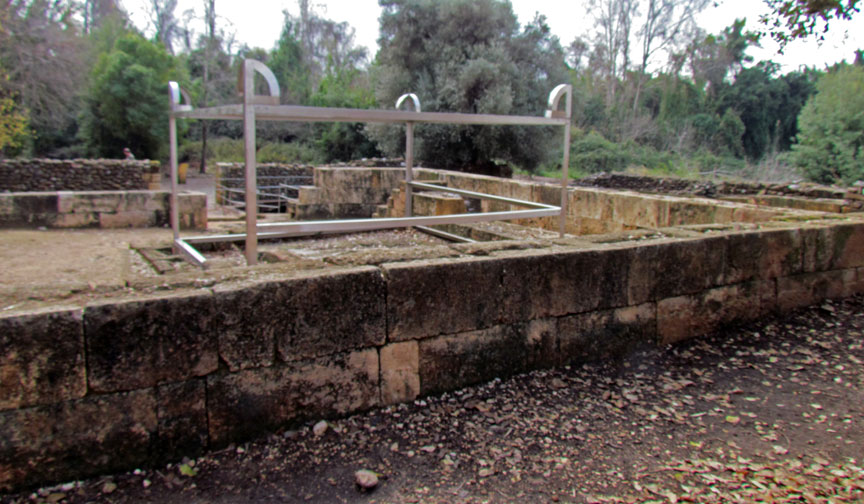 The bible describes the Tribe of Dan brutally defeating the people of Laish and burning the town to the ground, and then building their own town in the same spot. However, textual scholars believe that the whole narrative concerning Micah's idol is a slur on the sanctuary at Dan, by a writer or writers who were opposed to the presence of idols there, and that the apparent brutality may not reflect historic reality. The narrative states that Laish subsequently became known as Dan, after the name of the tribe, and that it housed a sanctuary filled with idols, which remained in use until the time of captivity of the land and the time that the house of God ceased to be in Shiloh. Scholars think that the former refers to the Assyrian conquest of the Kingdom of Israel by Tiglath-pileser III in 733/732 BCE, and that the latter refers to the time of Hezekiah's religious reform; an alternative possibility, however, supported by a minority of scholars, is that time of captivity of the land is a typographic error and should read time of captivity of the ark, referring to the battle of Eben-Ezer, and the Philistine capture of the Ark, and that the ceasing of the house of God being in Shiloh refers to this also. 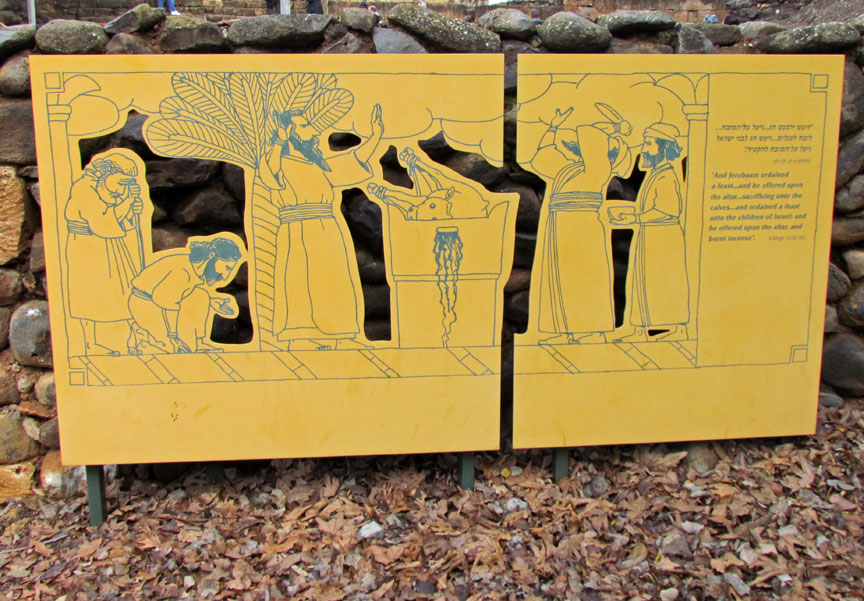 The excavators of Tel Dan uncovered a city gate made of mud bricks estimated to have been built around 1750 BCE, presumed to be the period of the Biblical patriarchs. Its popular name is Abraham's gate, because Abraham traveled to Dan to rescue his nephew Lot. Genesis 14:14: 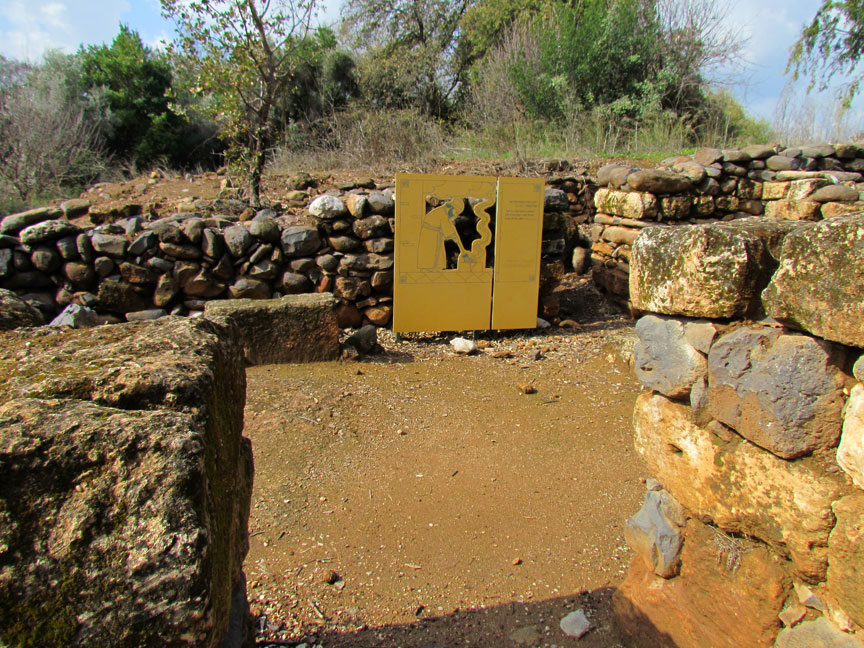 "And when Abram heard that his brother was taken captive, he armed his trained servants, born in his own house, three hundred and eighteen, and pursued them unto Dan." 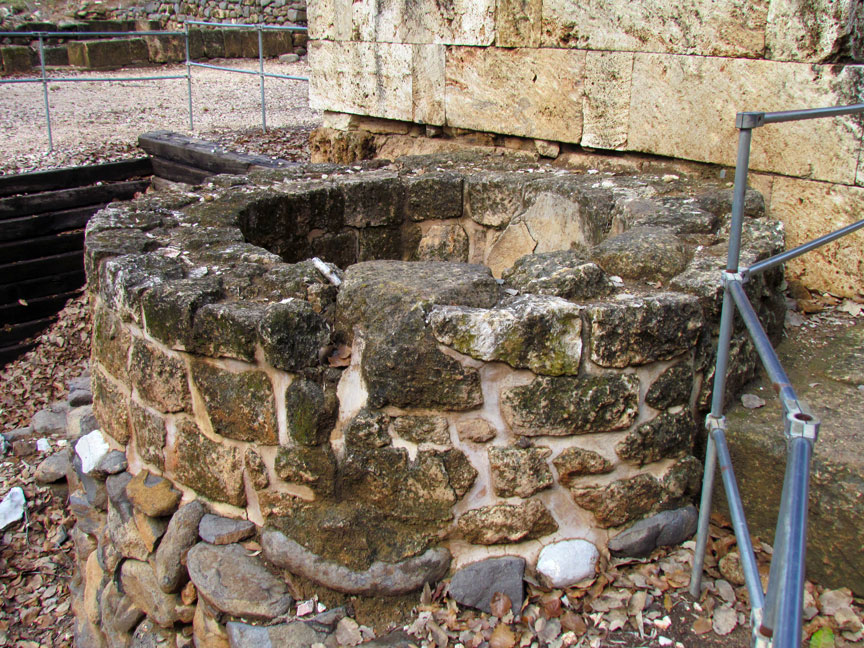 The gate was restored in the late 2000s, and has become a popular tourist attraction. 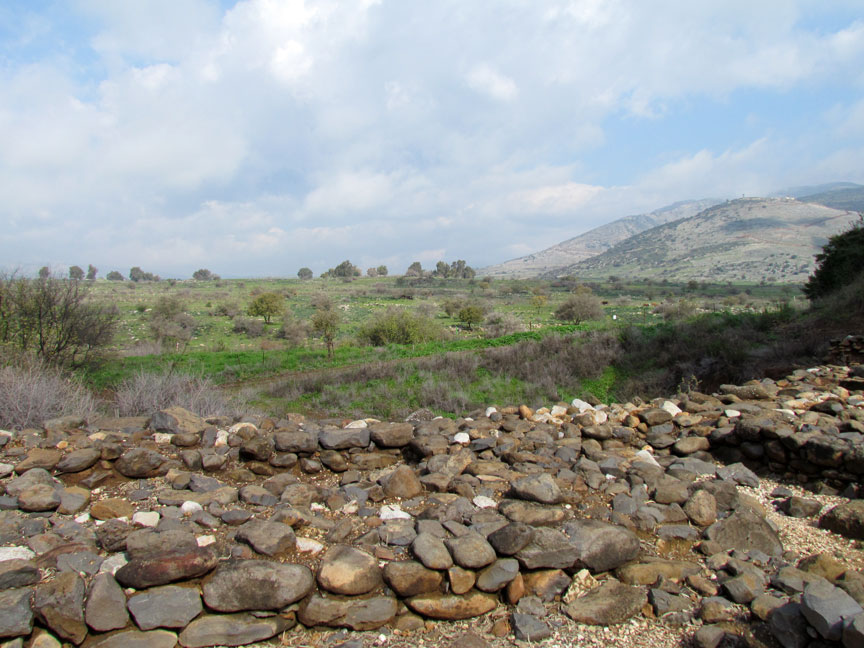 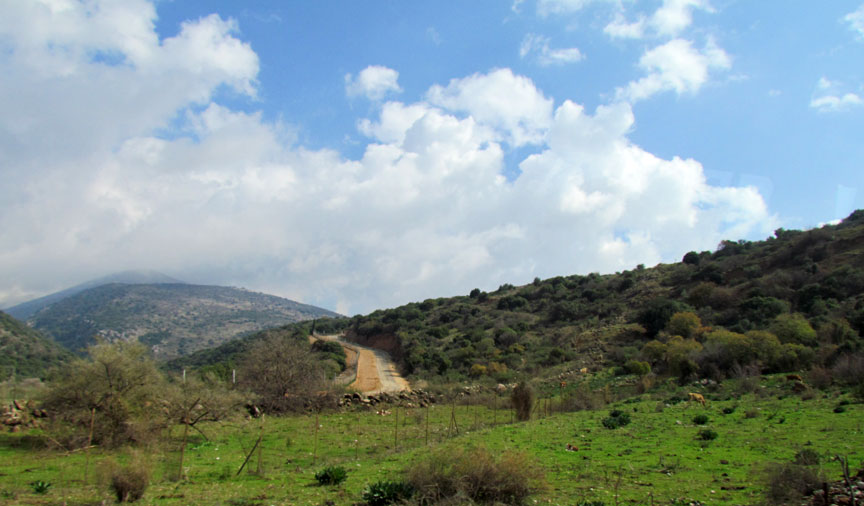 According to 2 Kings 10:29 and 2 Chronicles 13:8, Jeroboam erected two golden calves as gods in Bethel and Dan. Textual scholars believe that this is where the Elohist story of Aaron's Golden Calf actually originates, due to opposition in some sections of Israelite society (including the Elohist themselves) to the seeming idol-worship of Jeroboam. However, Biblical scholars believe that Jeroboam was actually trying to outdo the sanctuary at Jerusalem (Solomon's Temple), by creating a seat for God that spanned the whole kingdom of Israel, rather than just the small space above the Ark of the Covenant in Jerusalem; the seat for God in the Jerusalem sanctuary was represented by a cherubim on either side, while scholars believe that Jeroboam was using the calves to represent the sides of his seat for God - implying his whole kingdom was equal in holiness to the Ark. 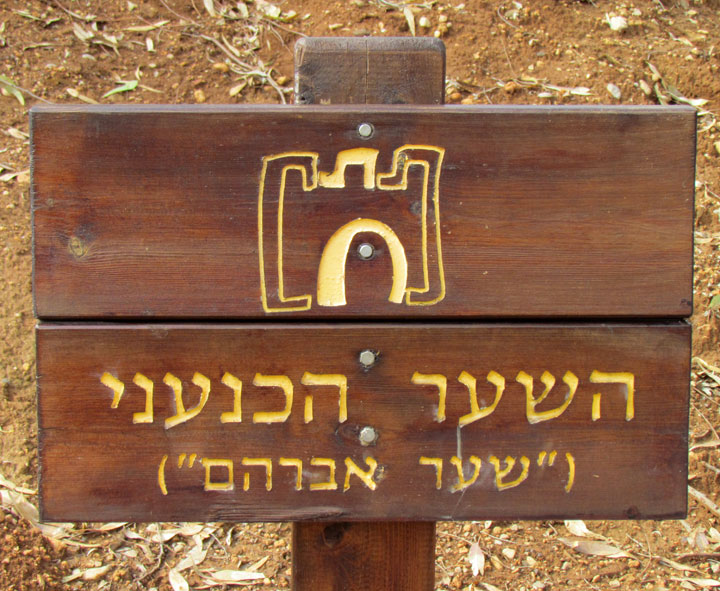 Within the remains of the city wall, close to the entrance of the outer gate, parts of the Tel Dan Stele were found. Three related basalt fragments, which the Israelites apparently broke up following the end of foreign occupation by the Aramaean king who commissioned the text, bears an Aramaic inscription, referring to one of the kings of Damascus; the excavators of the site believe that the king it refers to is Hazael (c 840 BCE), though a minority argue that it instead refers to Ben-Hadad (c 802 BCE). A small part of the inscription remains, with text containing the letters 'ביתדוד' (BYTDWD), which some archaeologists agree refers to House of David (Beth David in Hebrew. In the line directly above, the text reads 'MLK YSR'L', i.e. "King of Israel". Hebrew script from the era is vowel-less), which would make the inscription the first time that the name David has been found at an archaeological site dating before 500 BCE. 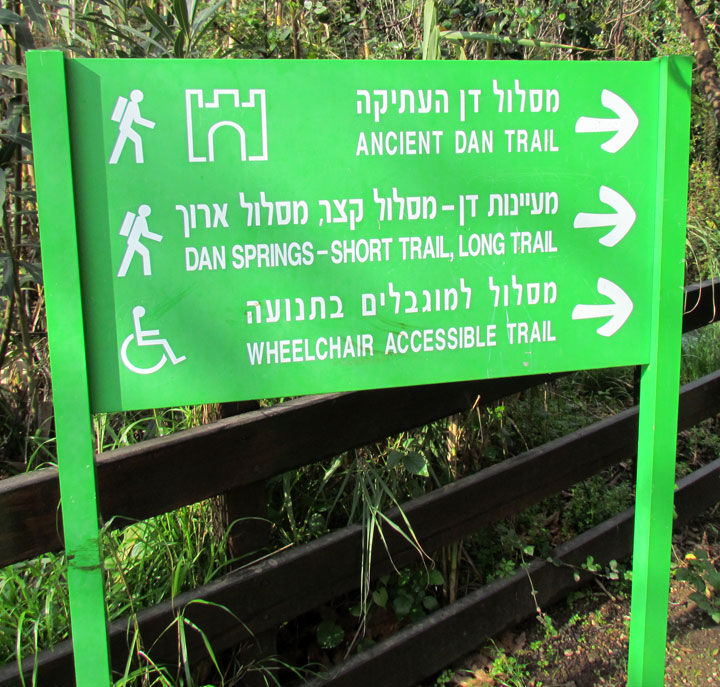 Dan suffered in the era of expansion by the Aramaeans, due to being the closest city to them in the kingdom of Israel. The several incursions indicated by the Book of Kings suggest that Dan changed hands at least four times between the Kingdom of Israel and Aramaeans, around the time that Israel was ruled by Ahab and the Aramaeans by Ben Hadad I, and their successors. Around this time, the Tel Dan stele was created by the Aramaeans, during one of the periods of their control of Dan. When the Assyrian empire expanded to the south, the kingdom of Israel initially became a vassal state, but after rebelling, the Assyrians invaded, the town fell to Tiglath-pileser III in 733/732 BCE. 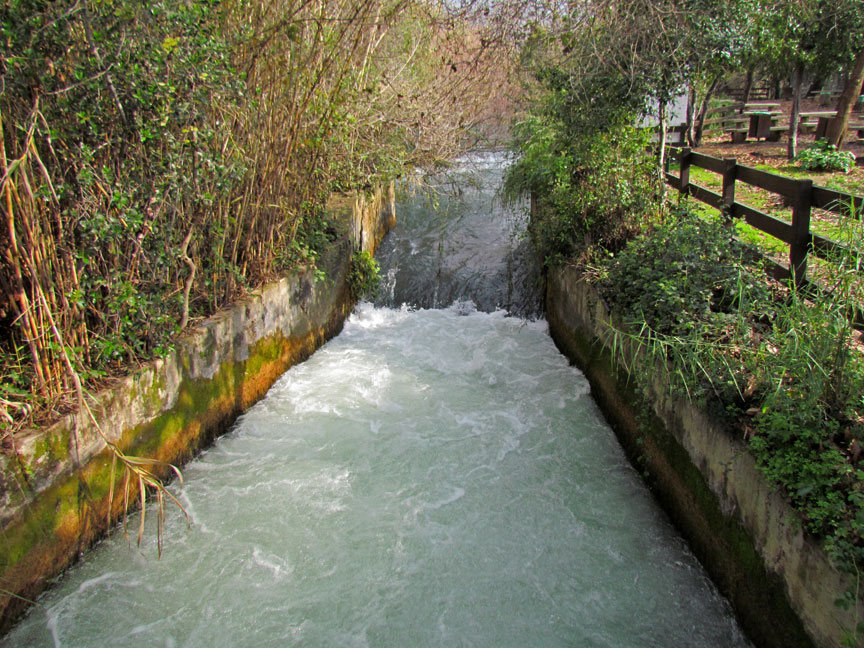 In 1992, in order to tidy up the site for presentation to visitors, a heap of debris was removed which dated from the time of the Assyrian destruction of the city by Tiglath-pileser III in 733/2 BCE. A hitherto unknown earlier gateway to the city was uncovered. The entrance complex led to a courtyard paved with stone with a low stone platform. This has been identified by some biblical literalists as the podium for the golden calf which the Bible states was placed there by Jeroboam dated to the 10th century BCE. In the 9th century BCE, the podium was enlarged, and major fortifications were built, a city wall with buttresses and a complex gate. The podium was enlarged further in the 8th century BCE by Jeroboam II, then destroyed by Tiglath-pileser III. 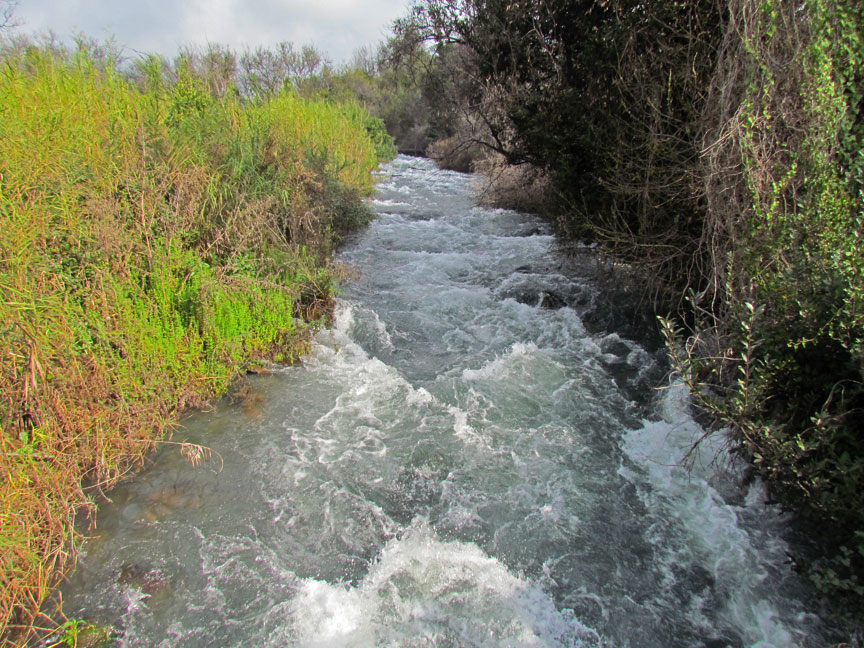 During the Persian, Hellenistic, and Roman periods, remains indicate that cultic activities continued around the podium (AKA "the High Place"). 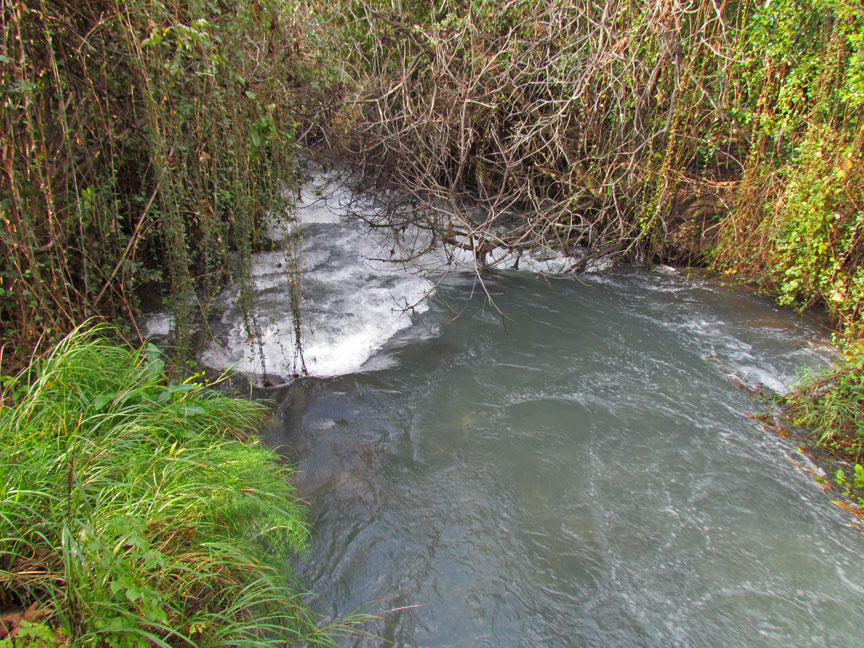 The Tel Dan reserve was first declared on 391 dunams surrounding the tel in 1974. 90 dunams were added to the reserve in 1989. The Dan River is one of the three water sources of the Jordan River that meet in the northern part of the Hula Valley. The river emanates from a spring in the reserve, at the foot of the tel. The area around the spring is a forest of oak, oleander, and plane trees intertwined with a thick growth of vegetation.