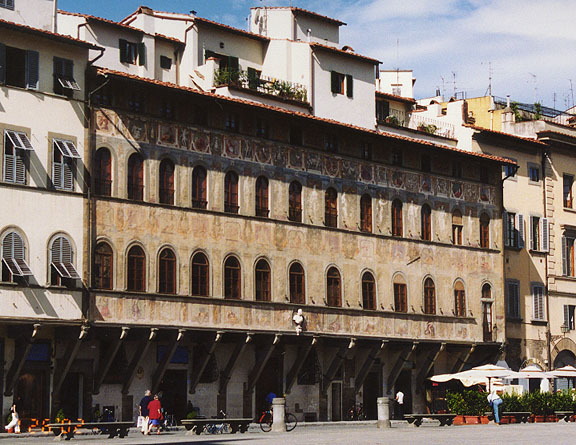 craft building in the old style

(Italian Firenze; ancient Florentia), city, central Italy, in Tuscany Region (Toscana), capital of Florence Province, on the Arno River. Located at the foot of the Apennines Mountains, Florence was originally the site of an Etruscan settlement. The city is world famous for Gothic and Renaissance buildings, art galleries and museums, and parks. In addition, it is an important commercial, transportation, and manufacturing center. It is a market for wine, olive oil, vegetables, fruits, and flowers, and it lies on the railroad and main highway linking northern Italy and Rome. Manufactures include motorcycles, automotive parts, agricultural machinery, chemicals, fertilizers, plastics, and precision instruments. Florentine handicraft industries are traditional and famous, producing silverwork, jewelry (especially gold and cameos), straw work, leather goods, glass, pottery, wood carvings, furniture, and embroidery. 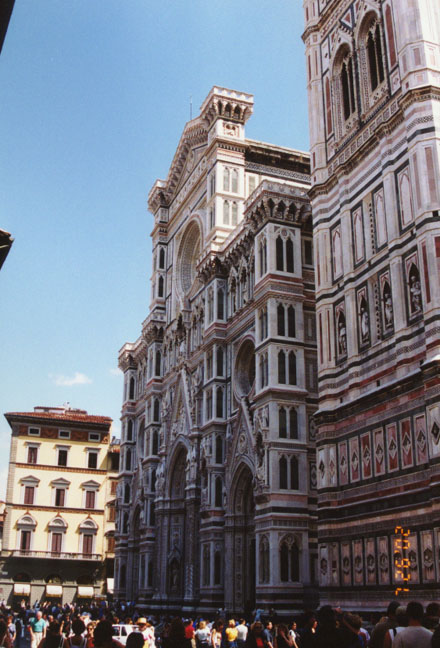 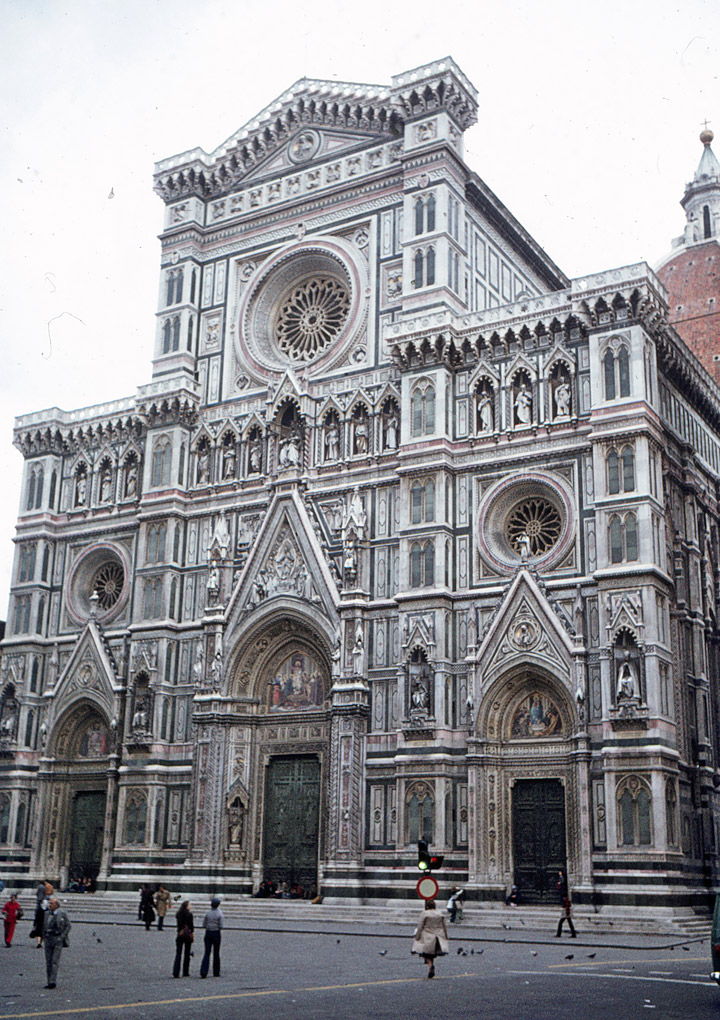 The city of Florence is dominated by the towers of its many palaces and churches and by the huge dome of the Cathedral of Santa Maria del Fiore. A Gothic structure with an exterior ornately decorated with red, green, and white marble, the cathedral was begun in 1296 by the Florentine architect Arnolfo di Cambio, continued on a somewhat different plan by his successors, and crowned with the great dome (1420-61), designed by Filippo Brunelleschi. 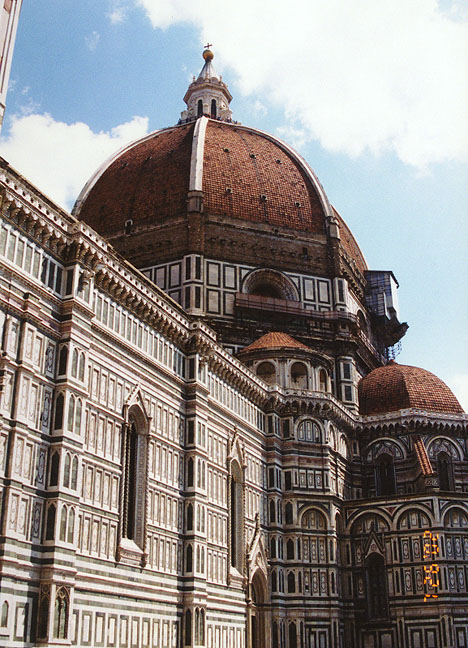 The facade, although not built until late in the 19th century, is faithful in style to the rest of the edifice. The cathedral is the most imposing structure on the right bank of the Arno. 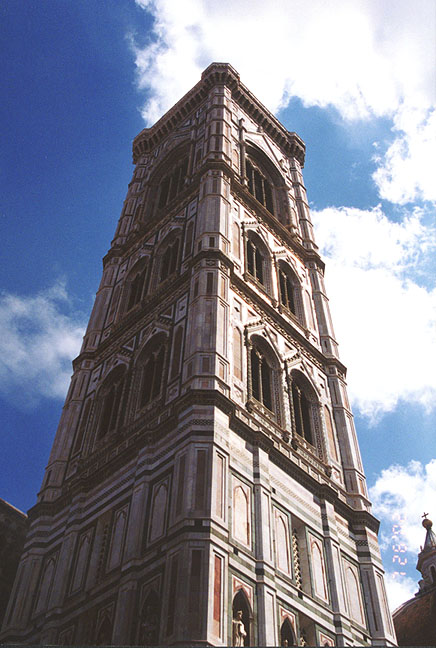 Beside the cathedral stands the 14th-century campanile, or bell tower, which was begun by Giotto and continued by Andrea Pisano. Adorned with exquisite bas-reliefs, the campanile (82 m/269 ft high) is perhaps the most beautiful in Italy. 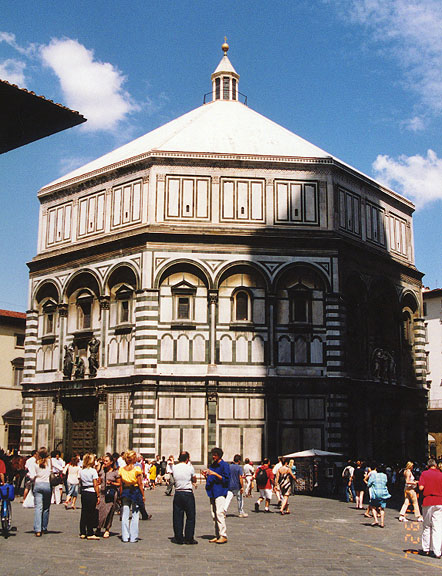 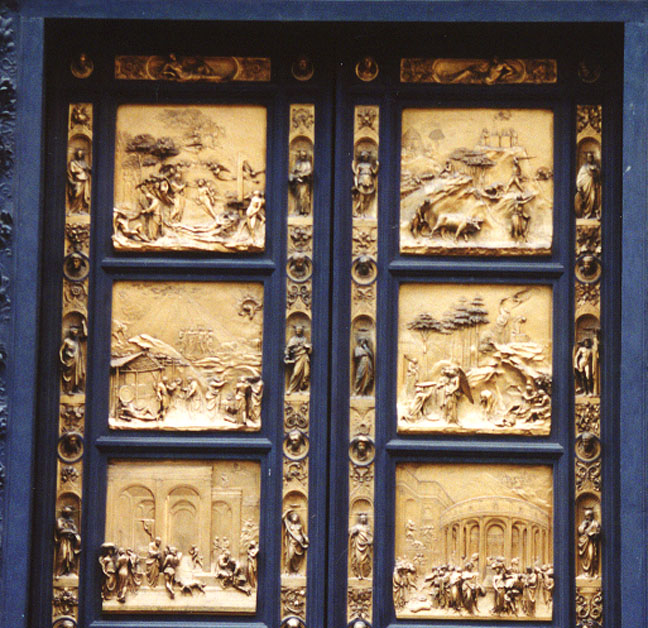 replica of the doors "Gates of Paradise" by Ghiberti  1403

Photos from the Interior of the Baptistery

The octagonal baptistery of San Giovanni, facing the cathedral, dates mainly from the 11th to the 15th century, although some parts were built as early as the 5th century; it is noted for doors of gilded bronze, especially the east door, called the Gate to Paradise, which was executed by the Florentine goldsmith Lorenzo Ghiberti and depicts sculpted scenes from the Old Testament. 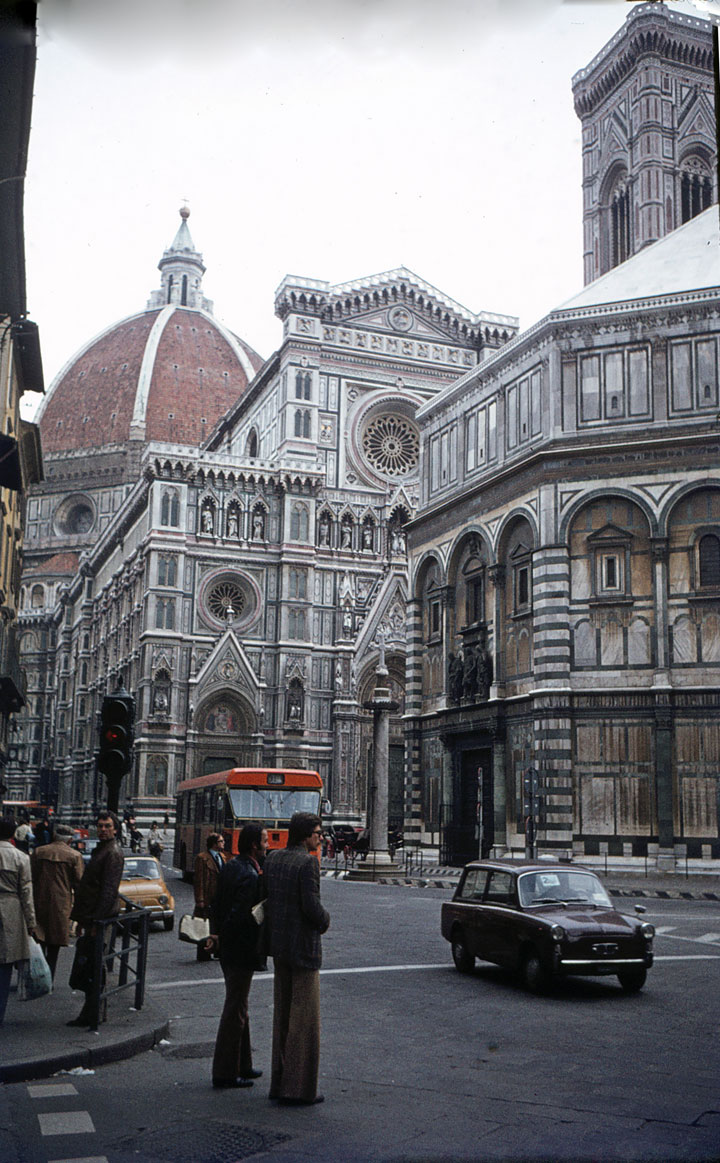 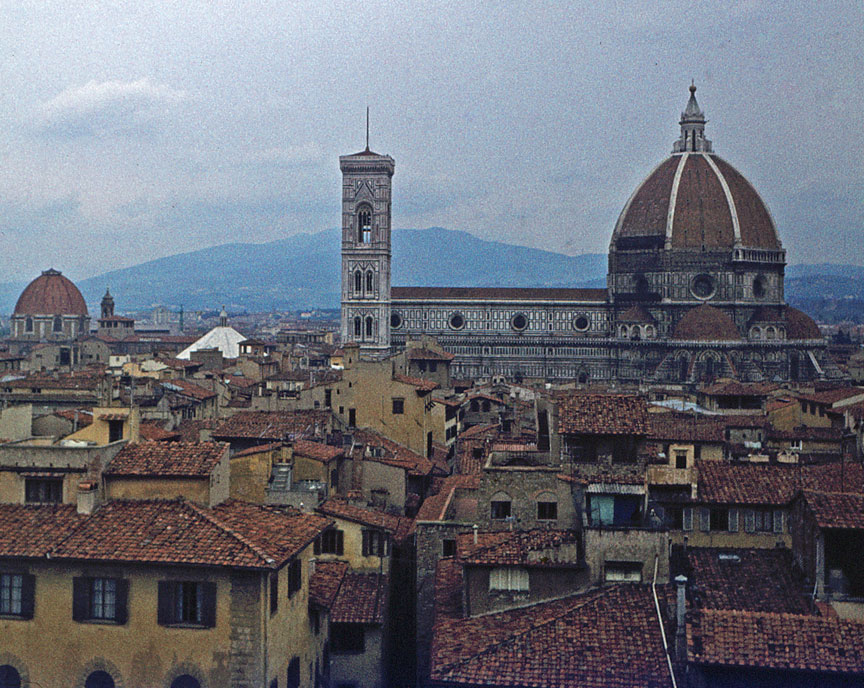 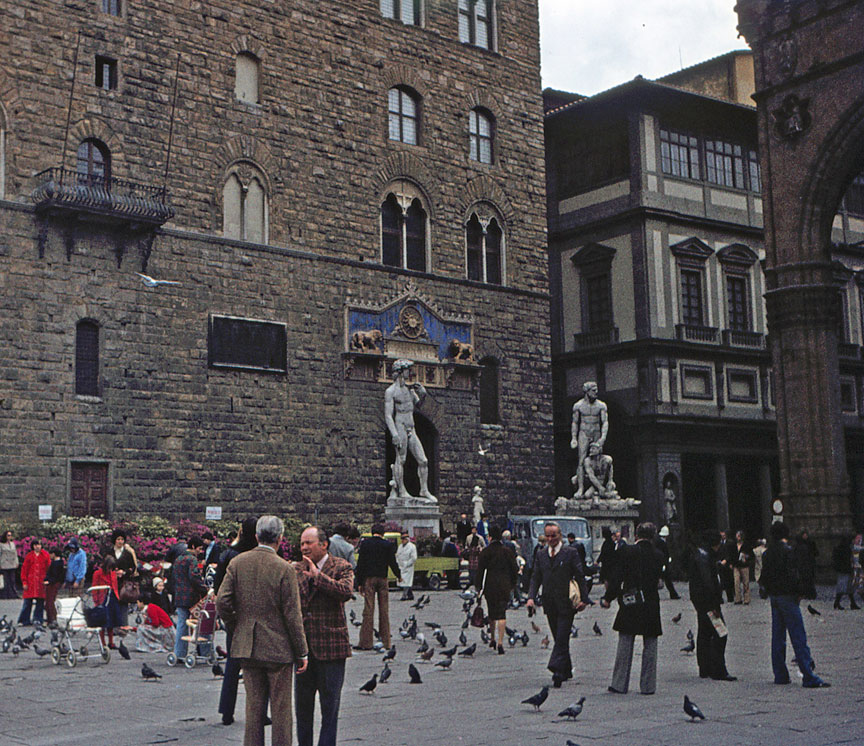 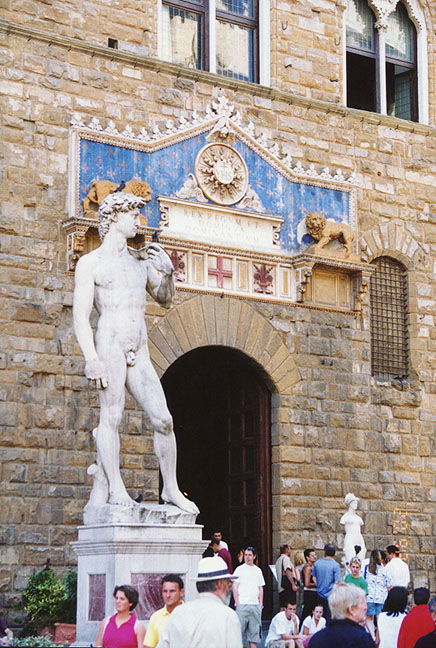 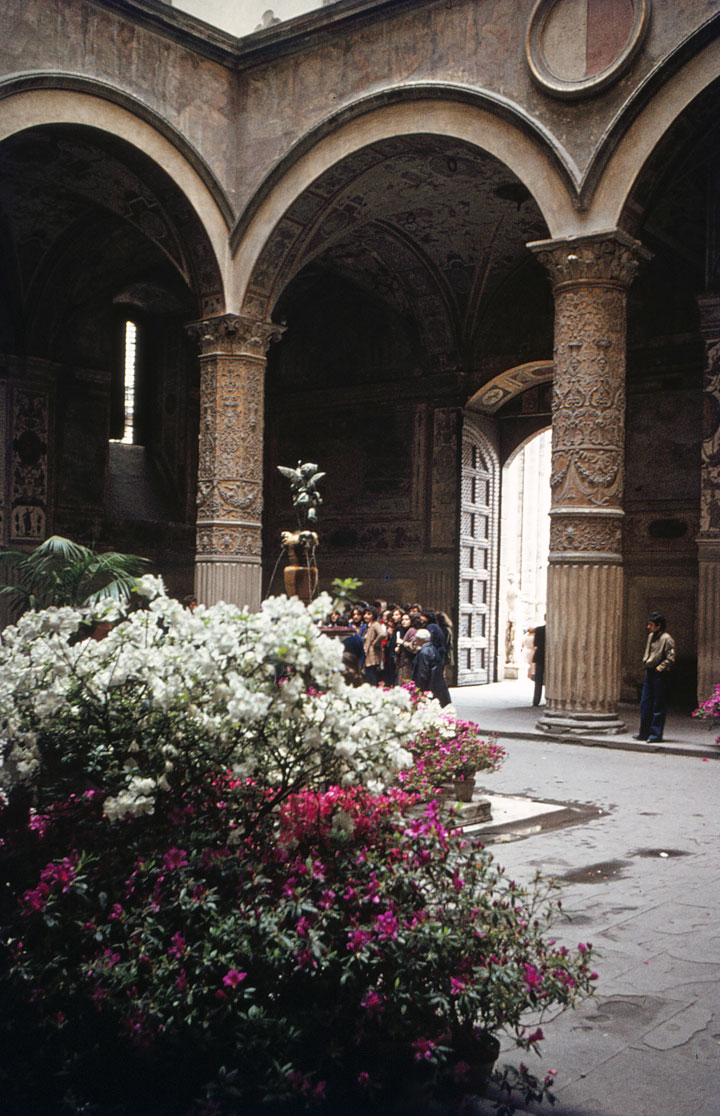 Near the cathedral is the Bargello, or Palazzo del Podestà, a fortresslike building of the 13th and 14th centuries, which houses a National Museum. The latter has collections of enameled terra-cottas by the della Robbia family and sculpture by Donatello. The Piazza della Signoria, containing the Fountain of Neptune (completed 1576), is dominated by the majestic Palazzo Vecchio, or Palazzo della Signoria, a rough and sturdy but pleasingly harmonious building surmounted by a crenellated 94-m (308-ft) bell tower. Built between 1299 and 1314, this palace became the seat of the town council in 1550; later the Italian Chamber of Deputies met there from 1865 to 1871. The vast halls and state apartments are ornately decorated in the style of the late Renaissance.

Opposite is the Loggia dell’Orcagna (late 14th century), also called Loggia dei Lanzi, a roofed structure open at the sides, which houses a number of statues, among them the bronze Perseus (completed 1554) by Benvenuto Cellini and the Rape of the Sabines (1579-1583) by Giambologna. 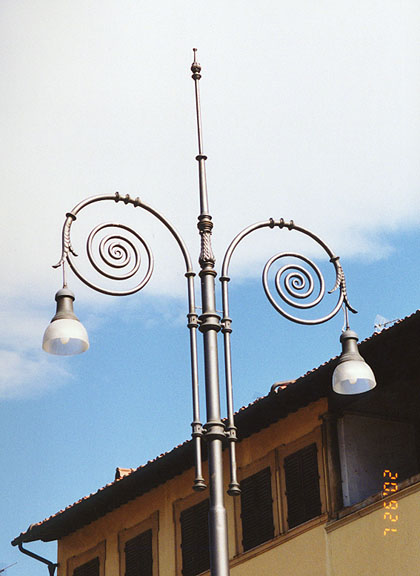 lamps in the classical fashion

Between the Palazzo Vecchio and the Arno stands the Palazzo degli Uffizi, built late in the 16th century to house government offices and law courts. It is famous for its art gallery, the Uffizi Gallery, one of the finest in Europe, which contains an unsurpassed collection of works by the greatest painters of Italy and a rich sampling of works by Flemish and French masters. 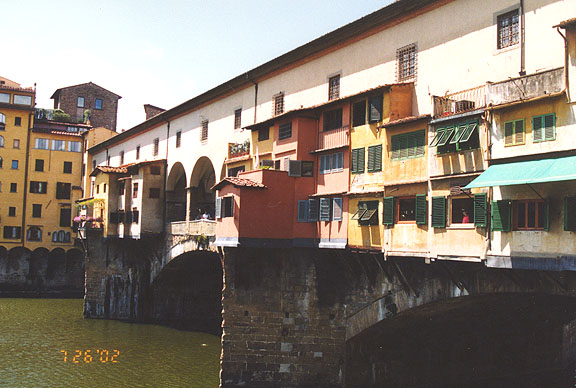 The nearby Ponte Vecchio, which is lined with goldsmiths’ and jewelers’ shops, was built about 1350; it is the only bridge in Florence spared during World War II and leads across the Arno to the Palazzo Pitti on the left bank. This building, begun in 1458 and subsequently much enlarged, was the residence of the grand dukes of Tuscany from 1550 to 1859. It contains another famous art collection, particularly rich in works by Andrea del Sarto, Raphael, Il Perugino, Titian, and Tintoretto. Behind the Pitti are the vast Boboli Gardens, used for outdoor concerts during the music festival held each year in May. 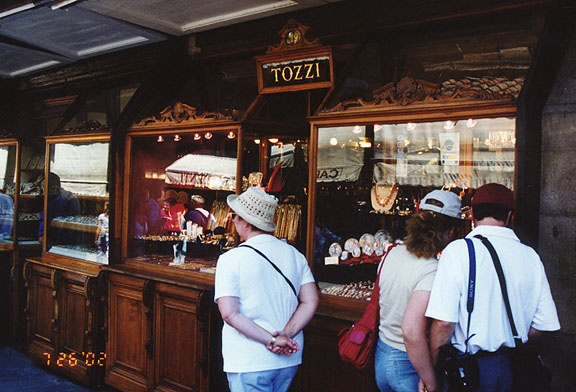 fashionable shops on the Ponte Vecchio

On the right bank of the Arno, in a kind of half-circle around the cathedral and the Palazzo Vecchio, are many famous churches and palaces. Noteworthy are the 13th-century Gothic Church of Santa Trinità, possessing a fine, luminous interior and a 16th-century baroque facade; and Santa Maria Novella (13th-15th century), with a colored marble facade and richly decorated cloisters, one of the most beautiful churches in the city. Eastward are the 15th-century church and cloisters of San Lorenzo, designed by Brunelleschi. The adjoining structure is the Medici Chapel, private chapel and burial place of the famous Medici family. Above the crypt of the Medici Chapel is the New Sacristy (1519-1534), for which Michelangelo was both architect and sculptor; the sacristy contains the tombs of Lorenzo II de’ Medici, duke of Urbino, with figures of Dawn and Twilight; and of Giuliano de’ Medici, duke of Nemours, with figures of Day and Night. 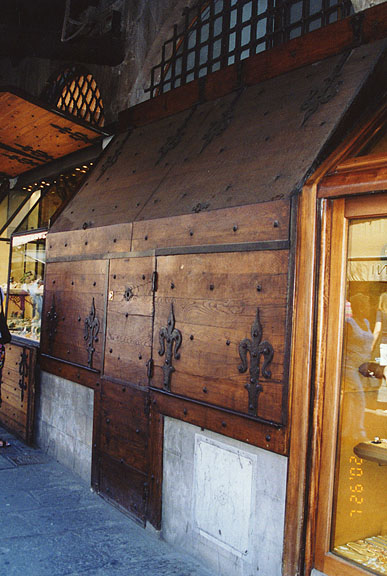 shop closed by use of wood doors 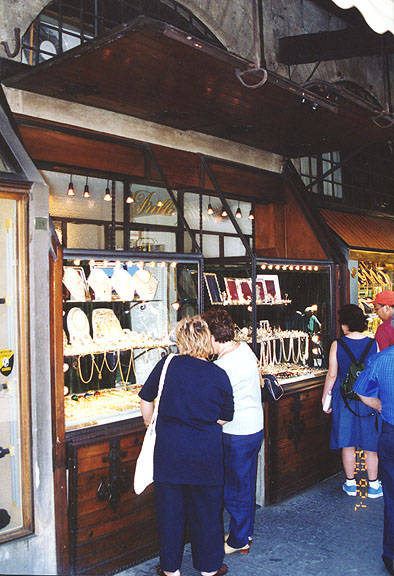 which open to display the gold and silver wares

The Palazzo Medici-Riccardi, built by Michelozzo for Cosimo de’ Medici in the mid-15th century, faces San Lorenzo across a large piazza. Typical of the residences built by prominent families in this period, the ground floor is a private fort with a graceful courtyard, and handsome chambers occupy the upper stories. It houses the Medici Museum. A few streets to the northeast is the former Dominican monastery of San Marco, also largely the work of Michelozzo. 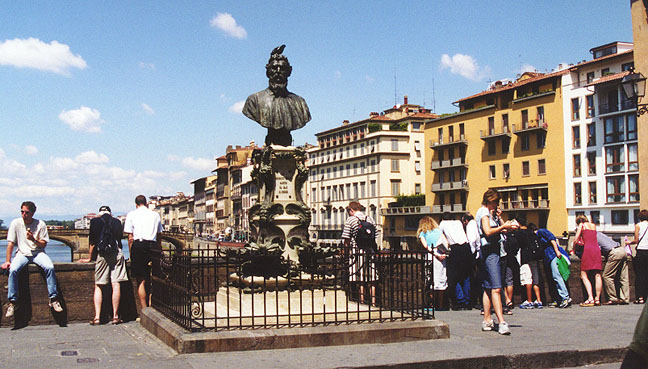 view from the Ponte Vecchio

It is now a museum in which are preserved the works of the two monks and painters Fra Angelico and Fra Bartolommeo, as well as the cell once occupied by the preacher and reformer Girolamo Savonarola. 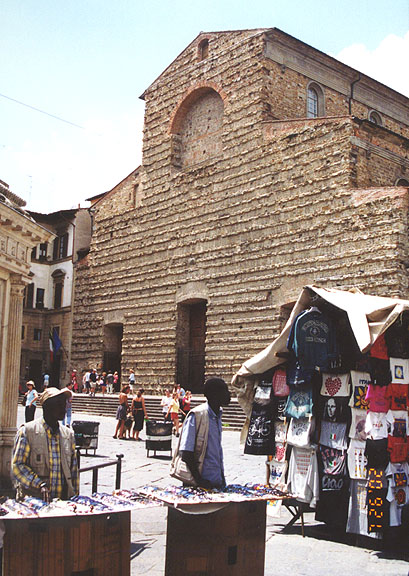 not all churches have elaborate facades

Nearby are the Spedale degli Innocenti (foundling home), with Brunelleschi’s graceful portico decorated with ten of Andrea della Robbia’s best-known blue and white terra-cotta medallions; the Gallery of the Academy of Fine Arts, housing many works of Michelangelo, including his David (1501-1504); and the Archaeological Museum, with an outstanding Etruscan collection. 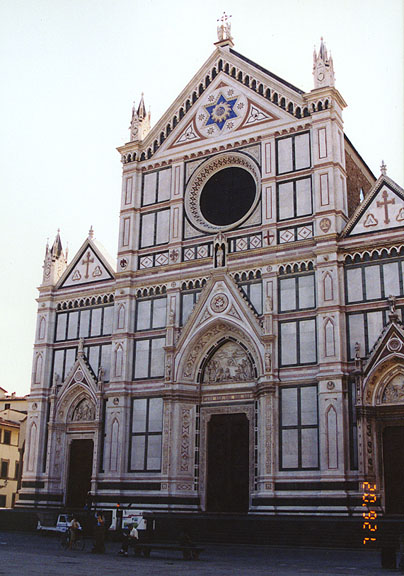 Southward, near the Arno, stands the handsome Franciscan Church of Santa Croce, built, except for a modern facade, in the 13th and 14th centuries. This church, with an interior of classic Franciscan simplicity and decorated with frescoes by Giotto and other masters, is called the Pantheon of Florence because it contains the tombs of Michelangelo, the statesman and political philosopher Niccolò Machiavelli, the poet and dramatist Conte Vittorio Alfieri, and the operatic composer Gioacchino Antonio Rossini, as well as monuments to many other noted Italians. 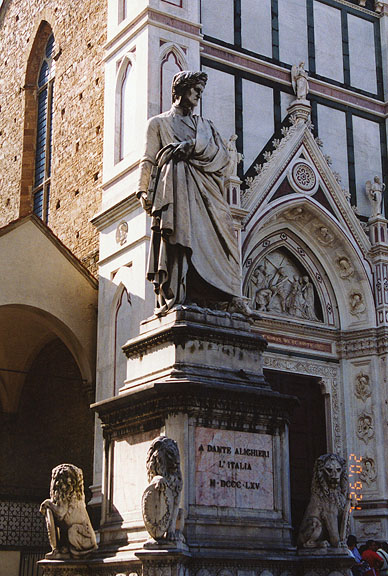 Other Photos of Florence