180 miles south of Aswan on the shore of Lake Nasser sits what is one of the most intriguing monuments of Egypt -- Abu Simbel, possibly the most astounding piece of Pharaonic Egyptian architecture. 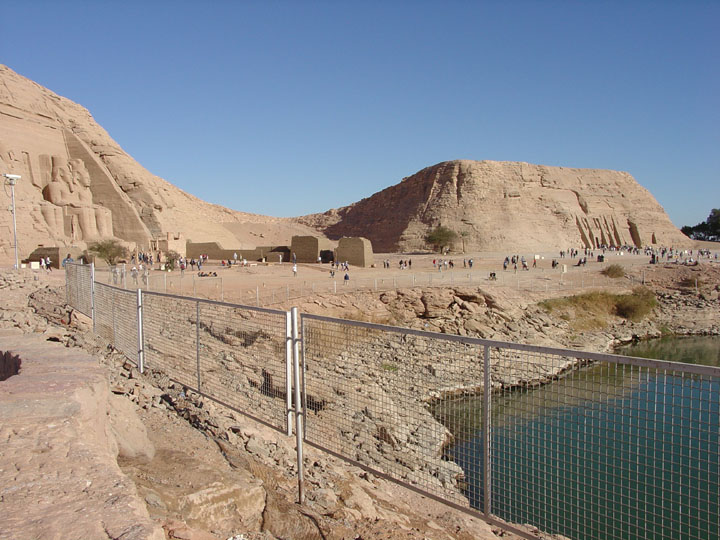 Abu Simbel
raised but still on the Nile (Lake Nasser)

Abu Simbel was built by Ramses II, the most prolific pharaoh in terms of building works, and no mean military commander either. It marked the border between Egypt itself and the southern nation of the Nubians. There are two temples, both originally built into a rock face. The Great Temple is dedicated to Ra, the sun god, and also really to Ramses himself. The smaller temple is dedicated to the cow goddess Hathor and also to Ramses II's favorite wife, Nefertari. 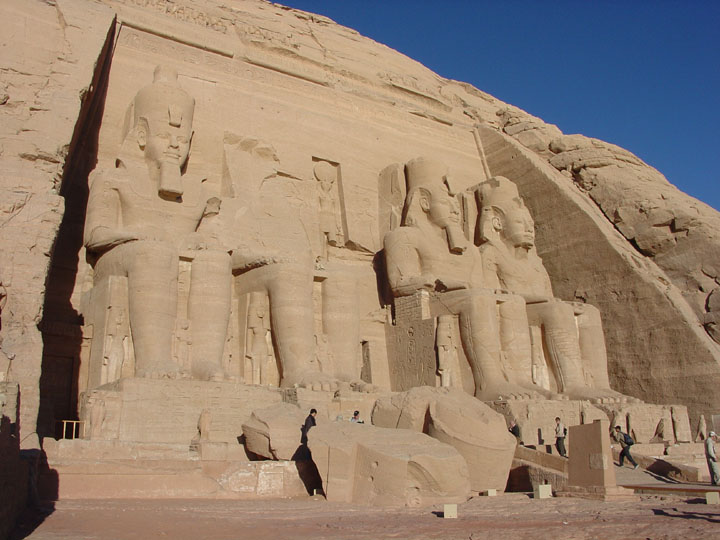 The massive facade of the main temple is dominated by the four seated colossal 66 foot colossal statues of Ramses each seated on a throne and wearing the double crown of Upper and Lower Egypt. Each is taller than the famed Memnon Colossus at Thebes, and all are sculpted directly from the rock face. The Great Temple is over 100 feet high and 120 feet whereas the smaller temple has four 33 foot statues of Ramses and two of Nefertari. An ancient earthquake damaged the statues. One is demolished from the waist up.

Through a hypostyle hall containing eight columns depicting Ramses II is an inner sanctuary with statues of Ra, Ramses II, Amun and Ptah seated against the far wall.

Postcard views of the Interior 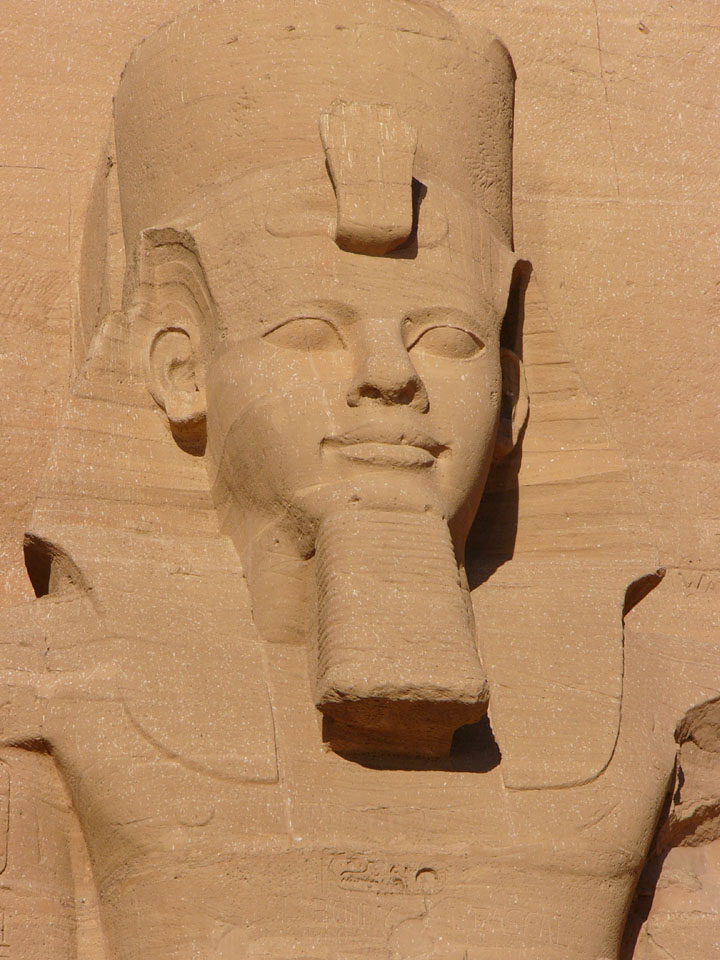 At the solstices, twice a year (February 21 and October 21) the dawn sunlight is aligned to light the entire length of the temple, lighting up three of the four statues, but never touching that of Ptah, the god of darkness. 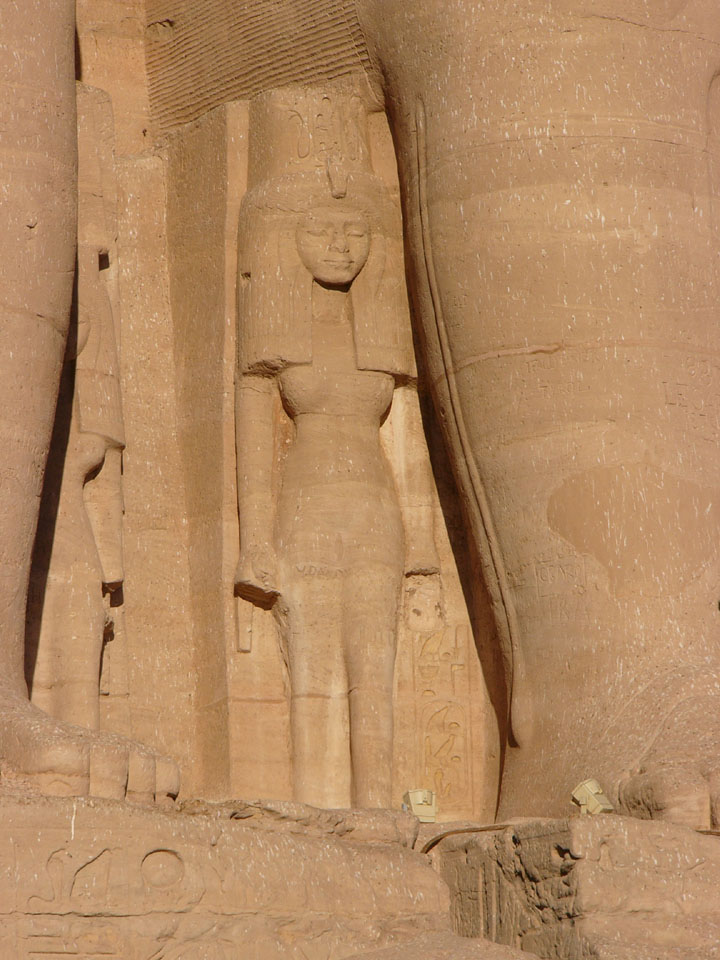 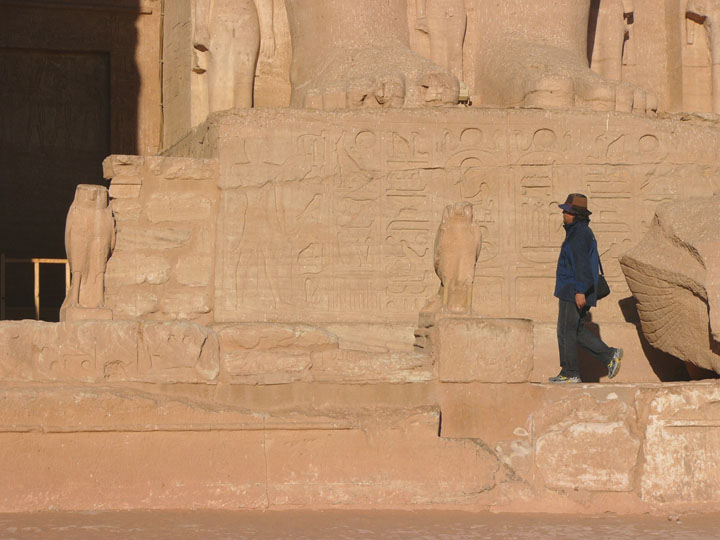 The forecourt or terrace which fronted the temple contained two tanks for the ablutions of the priests. On the northern side of this terrace stood a small., sun-chapel, and on the south, stood a chapel of the god Thoth. Above the entrance, a figure of the falcon-headed sun-god Ra is shown worshipped by flanking images of Ramses.. At the top of the temple façade is a row of baboon statues in adoring attitudes, said to welcome the rising sun. 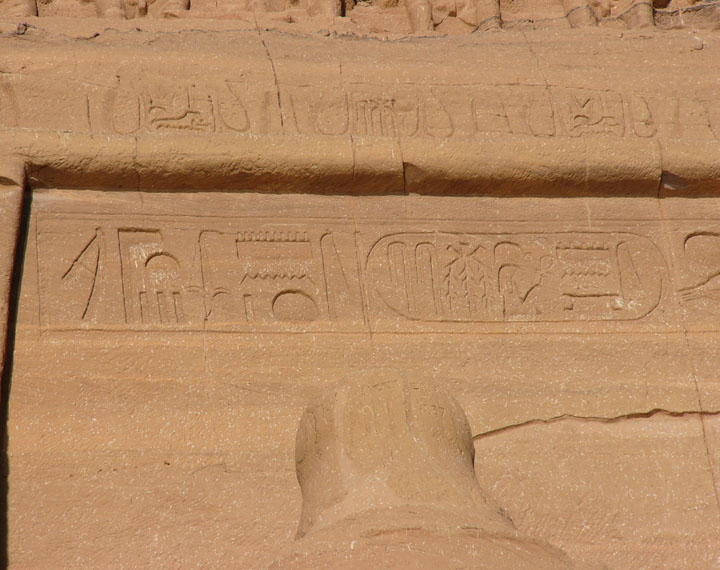 A stela at the southern end of the external terrace is called “the Marriage Stela,” and is a copy of the record of one of Ramses Ii’s diplomatic triumphs, his marriage to a daughter of the Hittite king Hattusilis Ill. 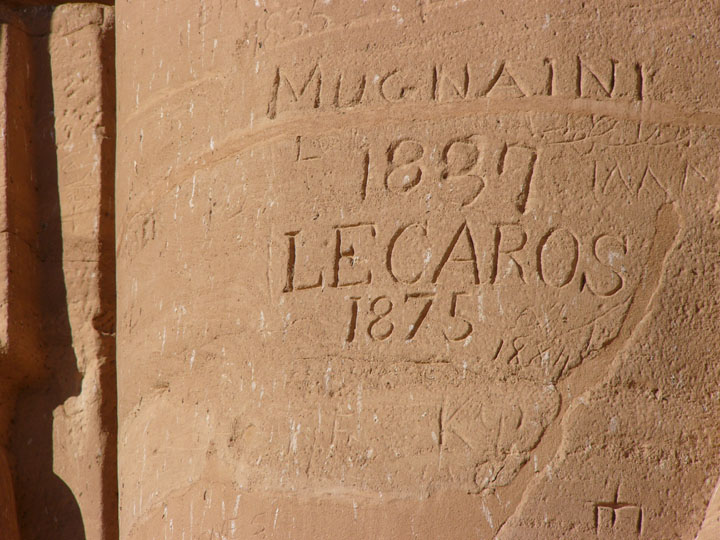 Within the temple a series of chambers becomes increasingly smaller as the floors of the rooms rise noticeably. This is a basic convention of temple design, as one moves into the temple deeper to the sanctuary which would contain the primeval mound of creation, rising out of the waters of Nun. 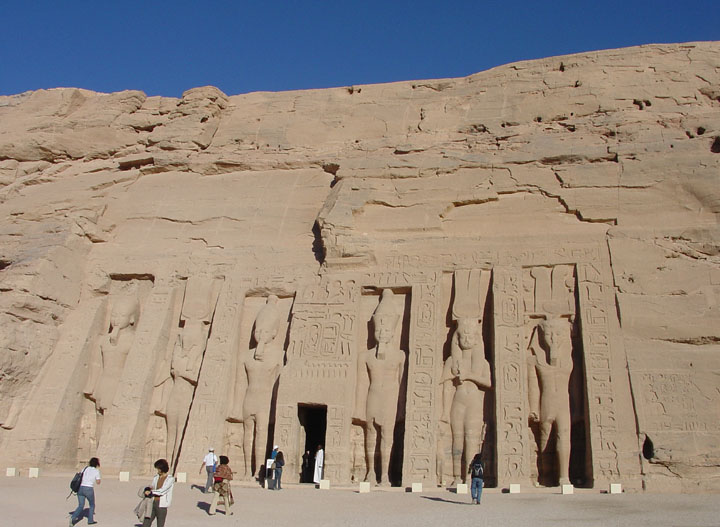 To the north of the main temple a smaller temple was built in honor of Ramses’ great wife, Nefertari, and the goddess Hathor. 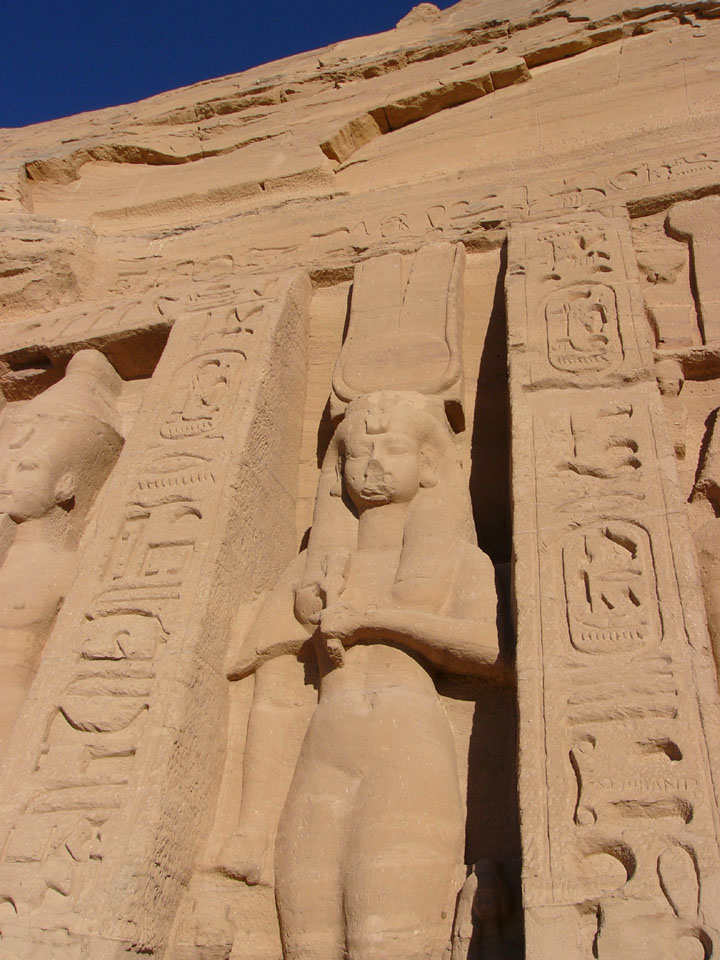 More Photos of the Hathor temple

Inside, Nefertari’s temple has a single pillared hail, with carved Hathor heads atop the pillars. On the sides facing the center of the hypostyle; Ramses is shown smiting his enemies and offering before various gods, while Nefertari is shown, graceful and slender, with hands raised. 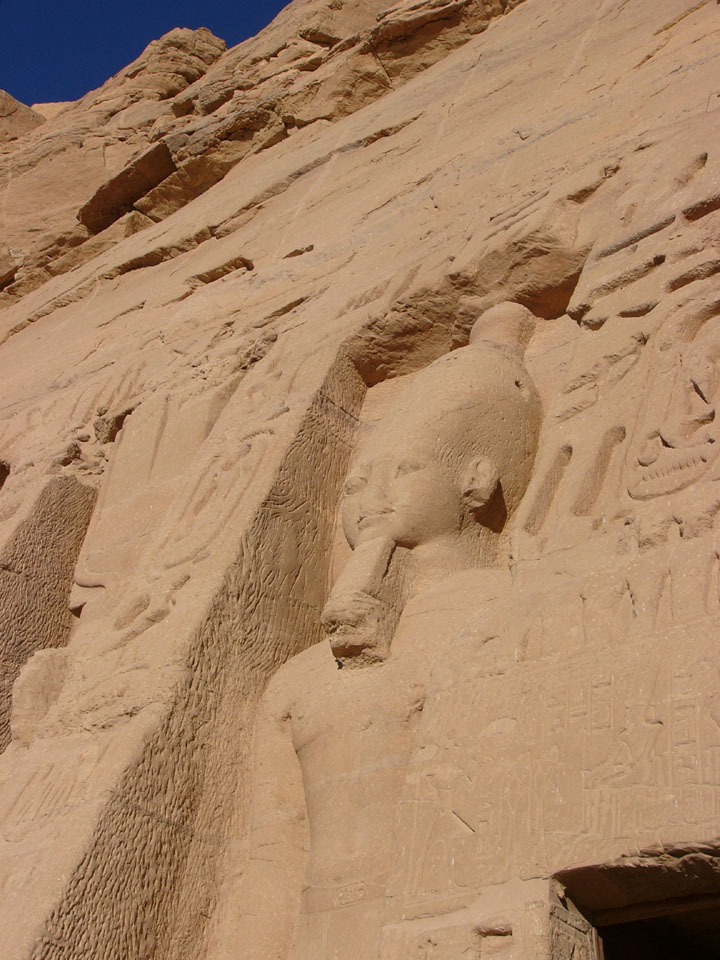 If this “miracle of the sun” is the first miracle of Abu Simbel, the saving of the temples is the second. The building of the High Dam at Aswan meant that the original site would be flooded, and the temples lost under the waters of Lake Nasser. 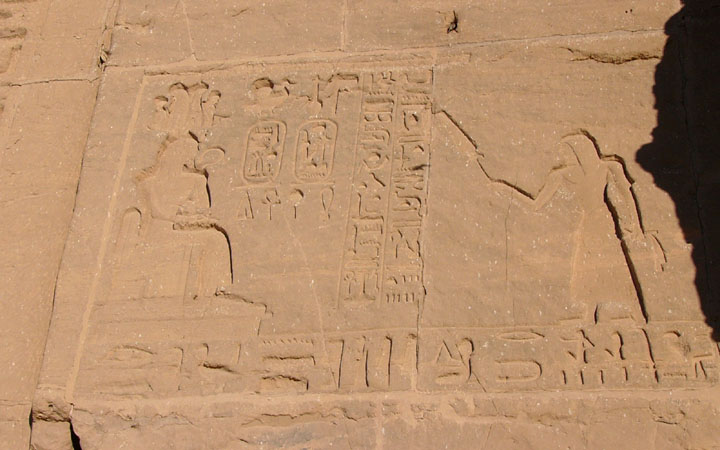 The conservation efforts to preserve the temple from the soon-to be built High Aswan Dam and its rising waters started in the 1960s. The colossal statues were dismantled and relocated in 1968 on the desert plateau, 200 feet above and 600 feet west of their original location.