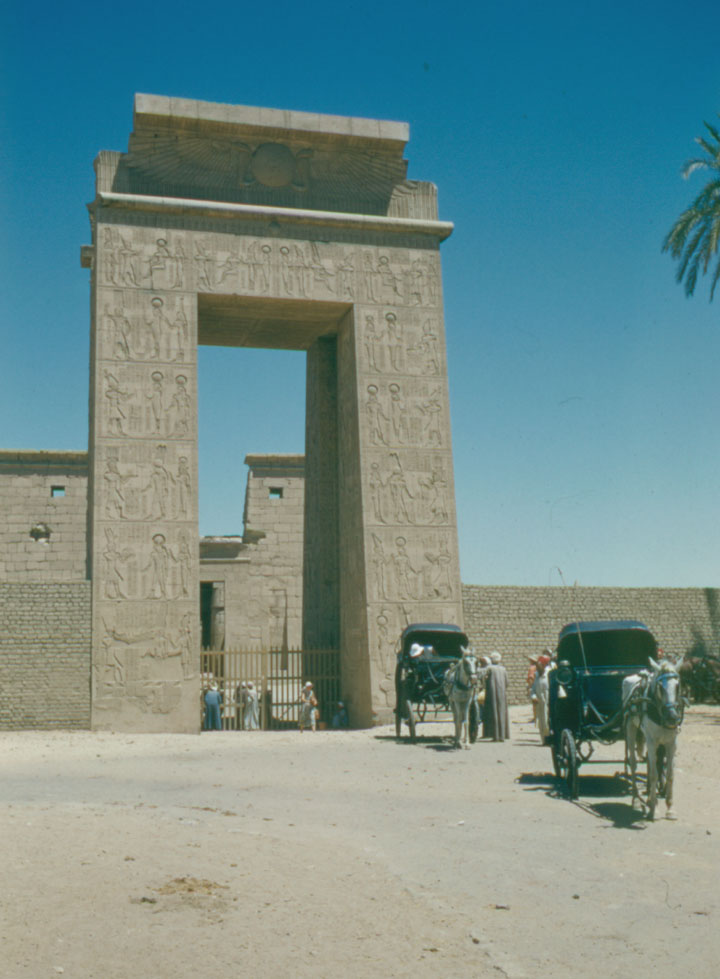 The temple of Karnak was known as Ipet-isut (Most select of places) and was dedicated to the Theben triad of Amen, Mut and Khonsu. It is actually a complex of three main temples, smaller enclosed temples, and several outer temples. This vast complex was built and enlarged over a thirteen hundred year period. Karnak is the biggest temple complex in the world, covering an area of 100 hectares. The area of the sacred enclosure of Amen alone is 61 acres and would hold ten average European cathedrals. The great temple at the heart of Karnak is so big, St Peter’s, Milan and Notre Dame Cathedrals could be lost within its walls. It is the mother of all religious buildings, the largest ever made as well as a place of pilgrimage for nearly 4,000 years. 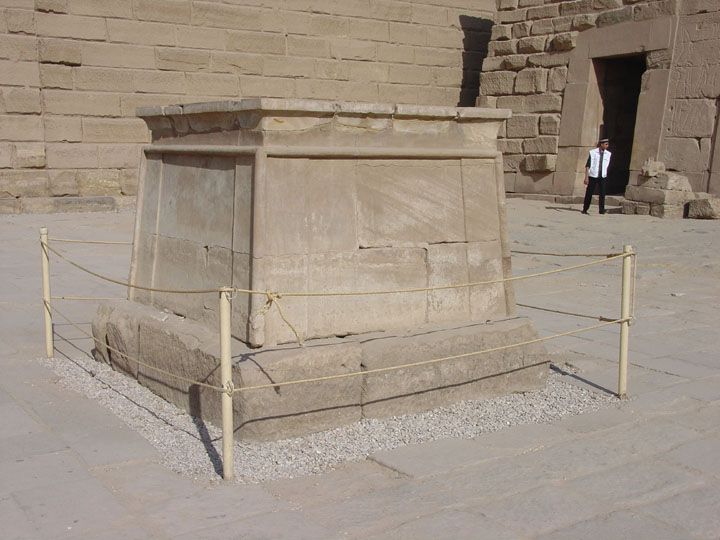 The forecourt is now inside the entrance pylon but would have originally been outside the main temple In the centre are the remains of the giant Kiosk of the Nubian pharaoh, Taharko. 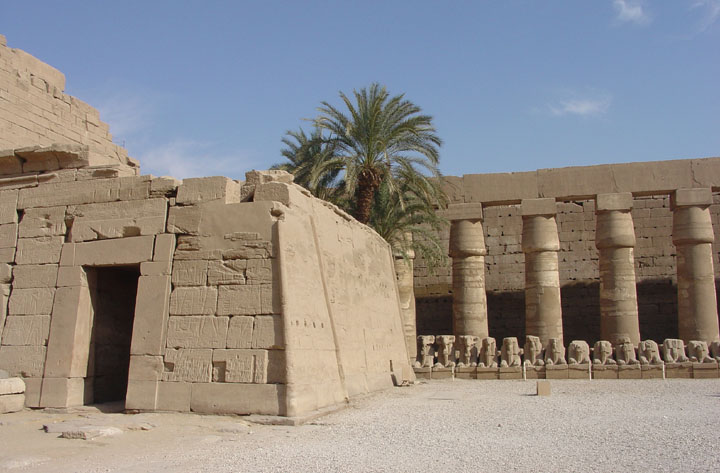 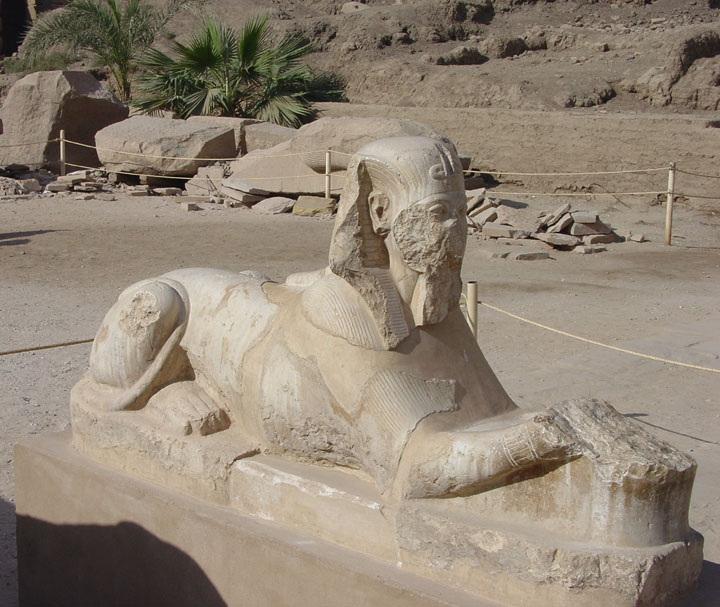 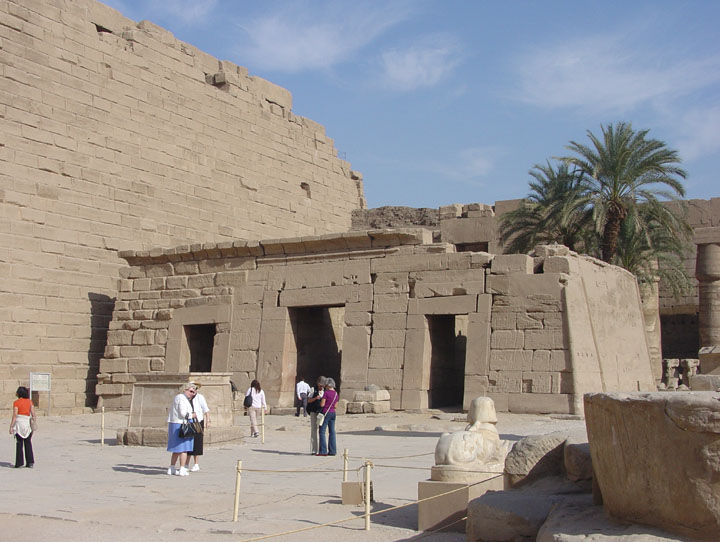 Chapels to Mut an Amun 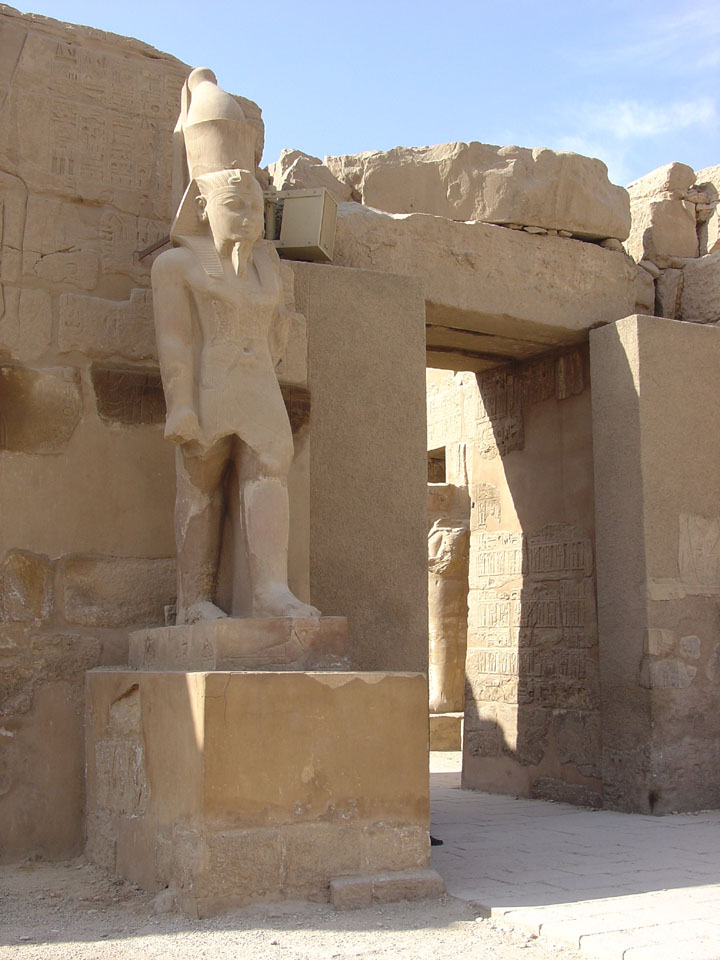 The temples are built along two axes (east-west and north-south) with the original Middle Kingdom shrines built on a mound in the centre of what is now called the Temple of Amen. 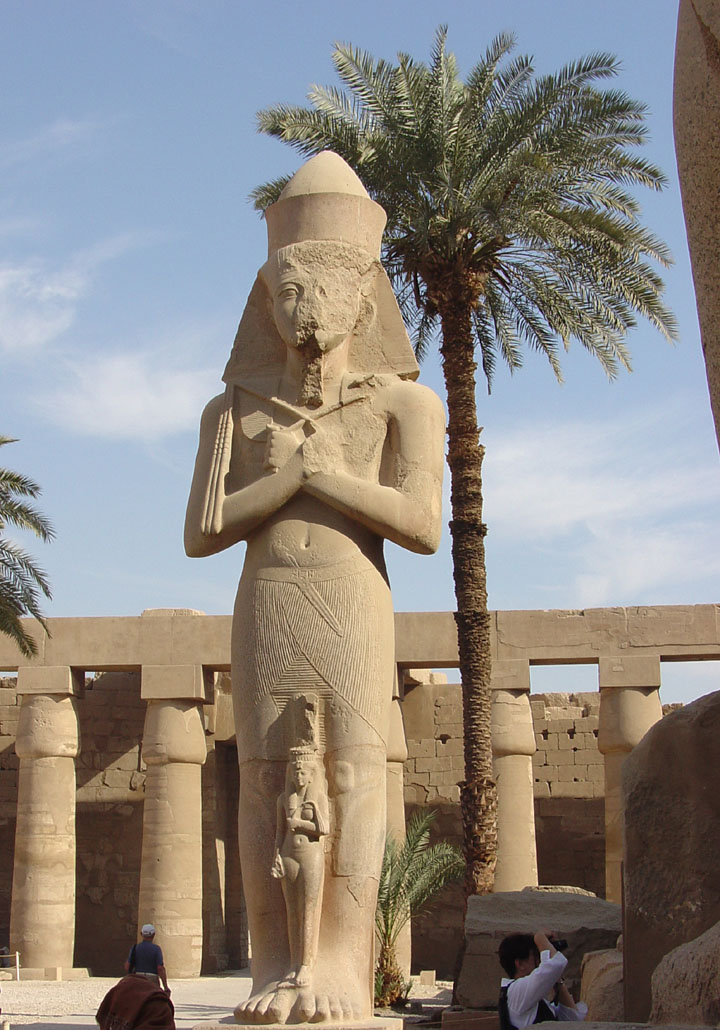 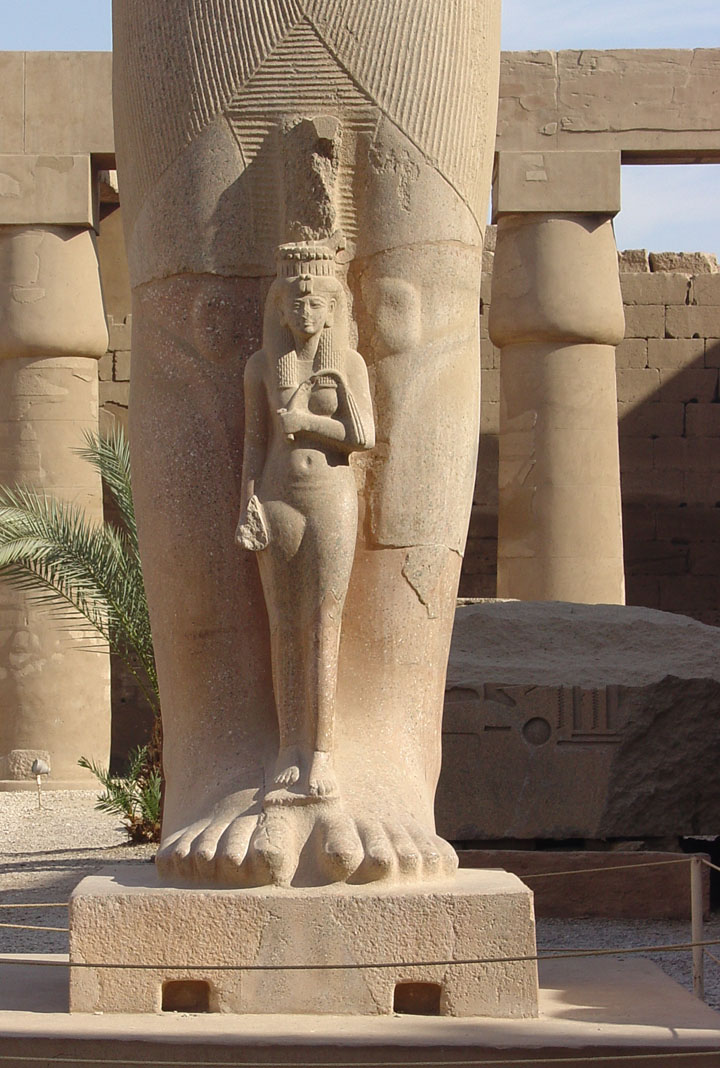 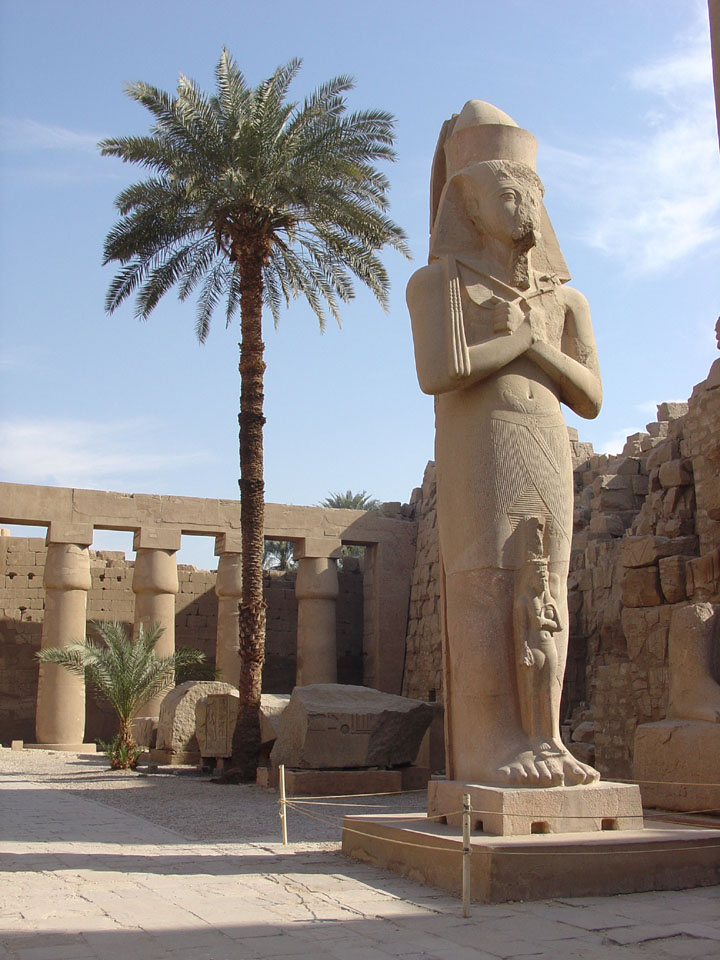 On the west side is the entrance to the temple used by visitors which was once a quay built by Rarneses 11 to give access via a canal to the river Nile. 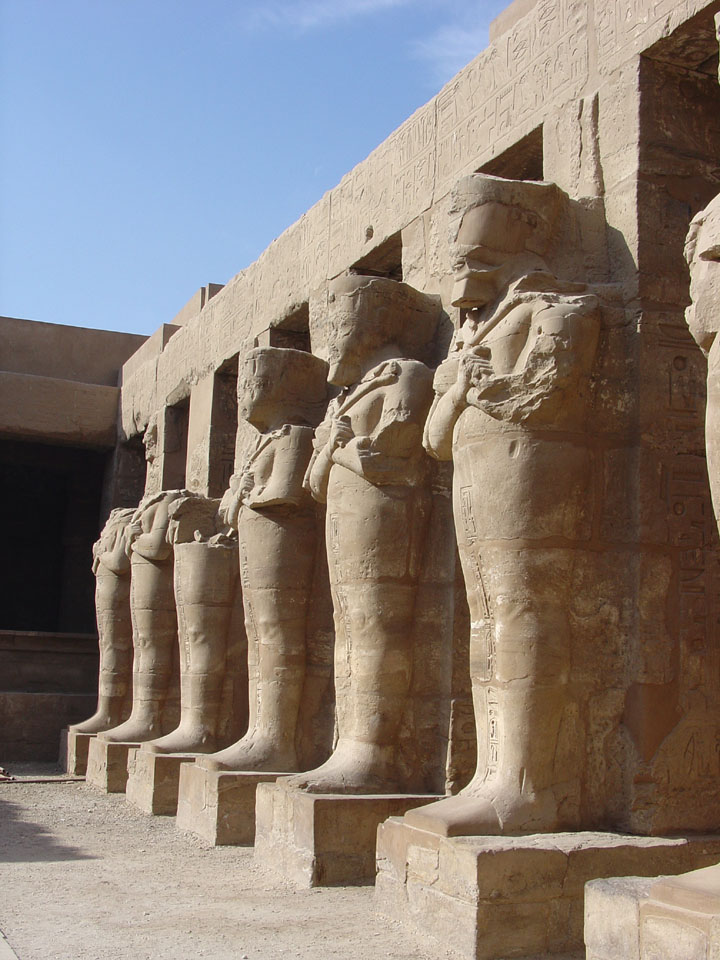 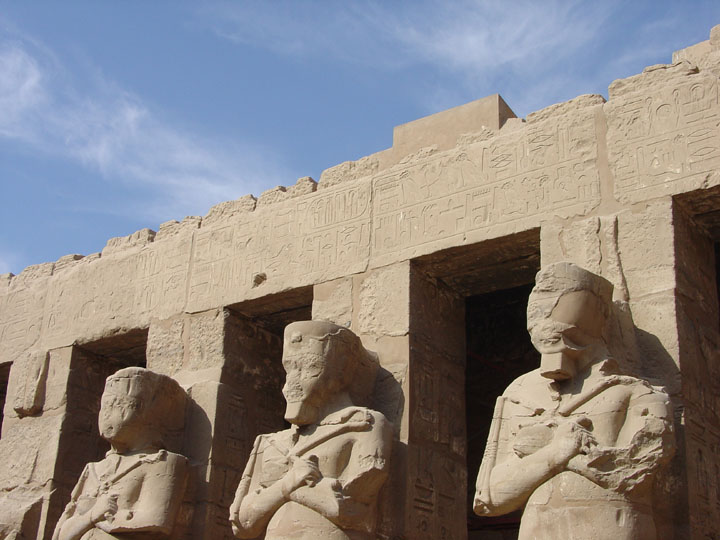 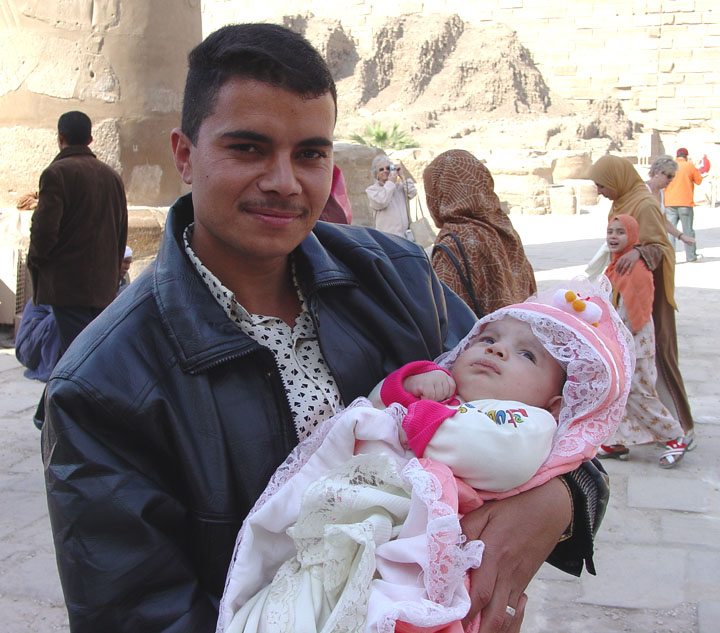 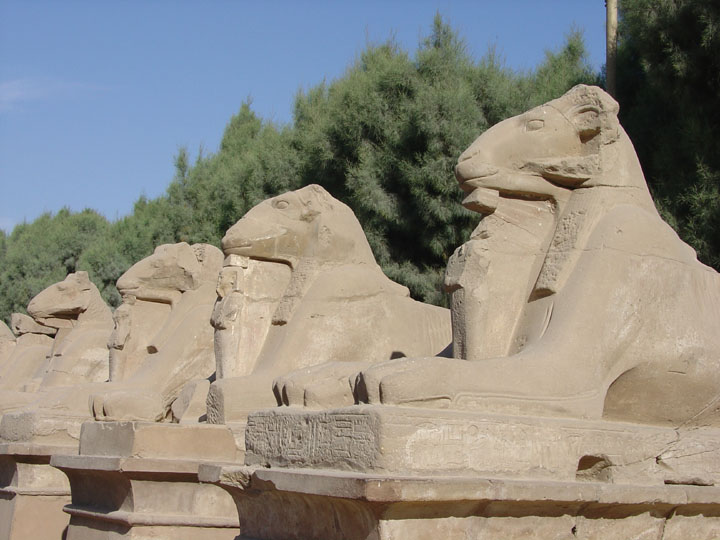 the Avenue of Sphinxes leading to the Luxor temple 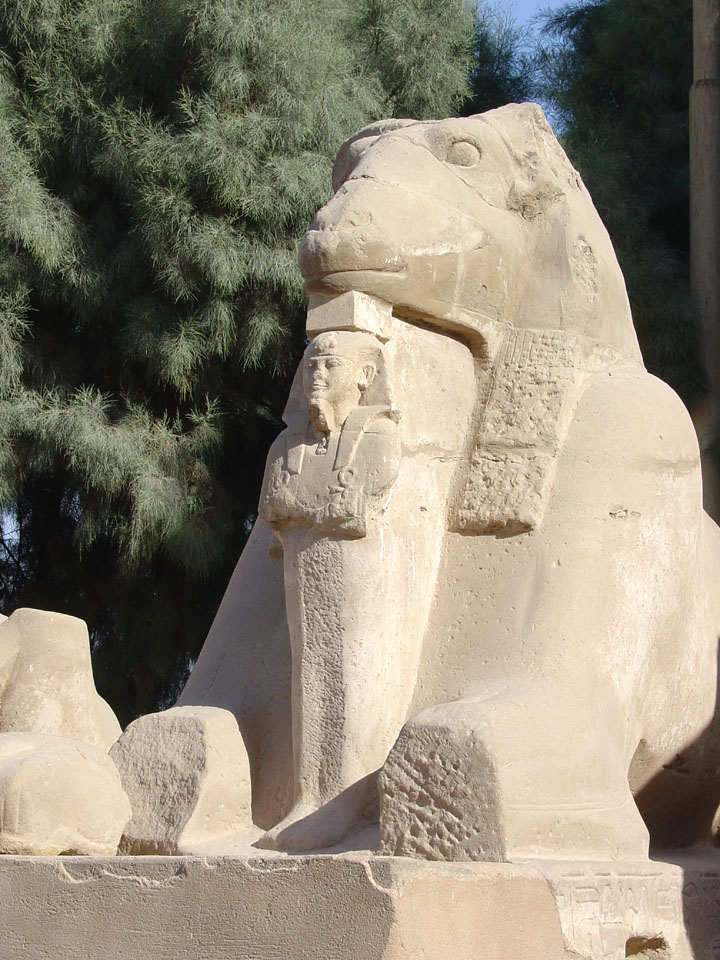 holding the statue of Rameses II

An avenue of ram-headed sphinxes leads the visitor towards the massive front of the first pylon, each one holding a statue of the king, Rameses II, in its paws. 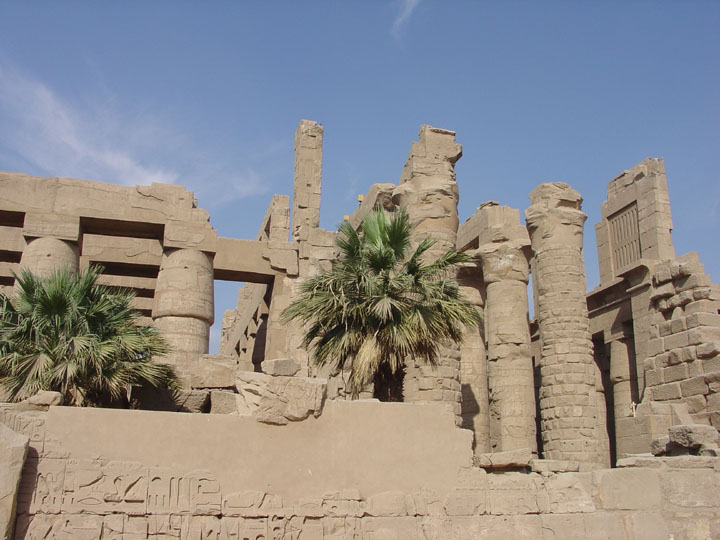 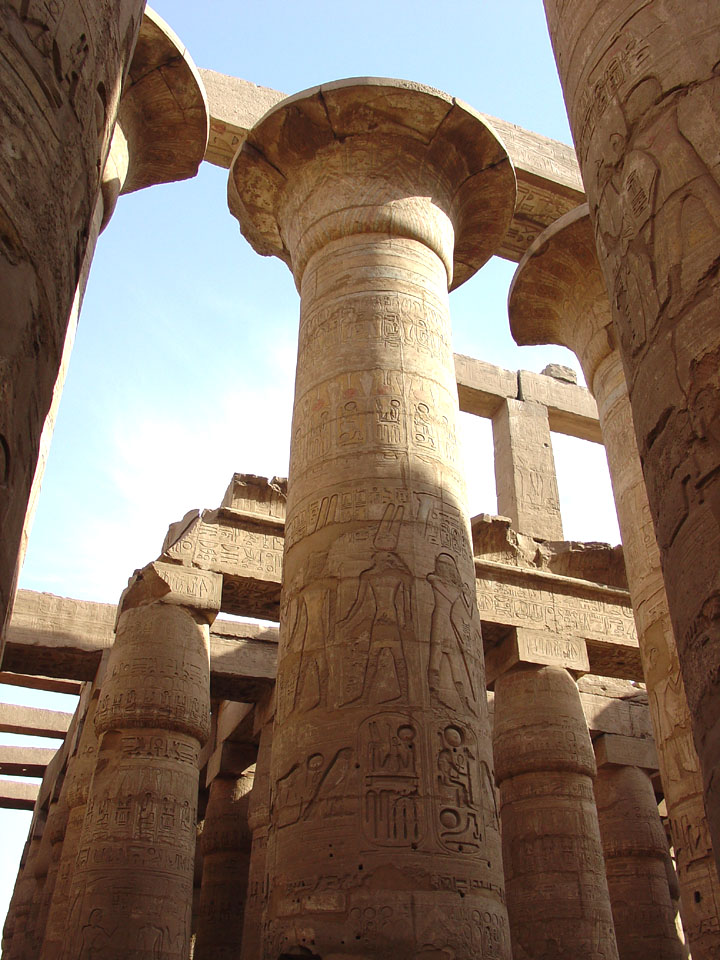 More Photos of the Hypostyle Hall

Through the entrance of the second pylon is the famous hypostyle hall 54,000 square feet with its 134 columns is still the largest room of any religious building in the world. 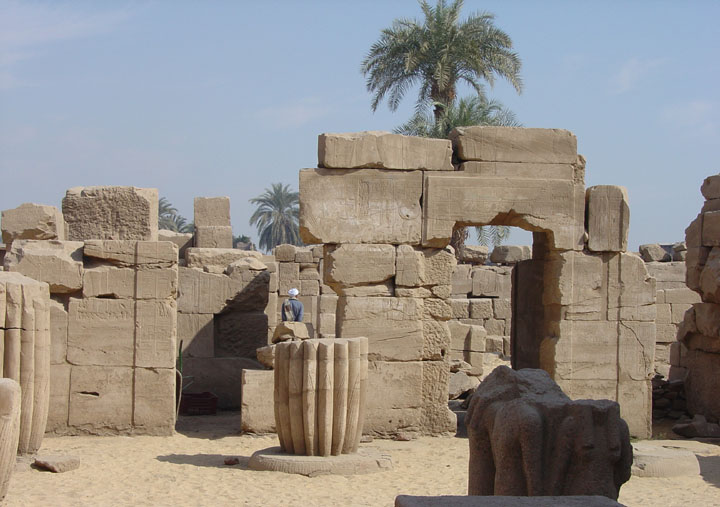 older part of the temple, built in early Dynasty XVIII 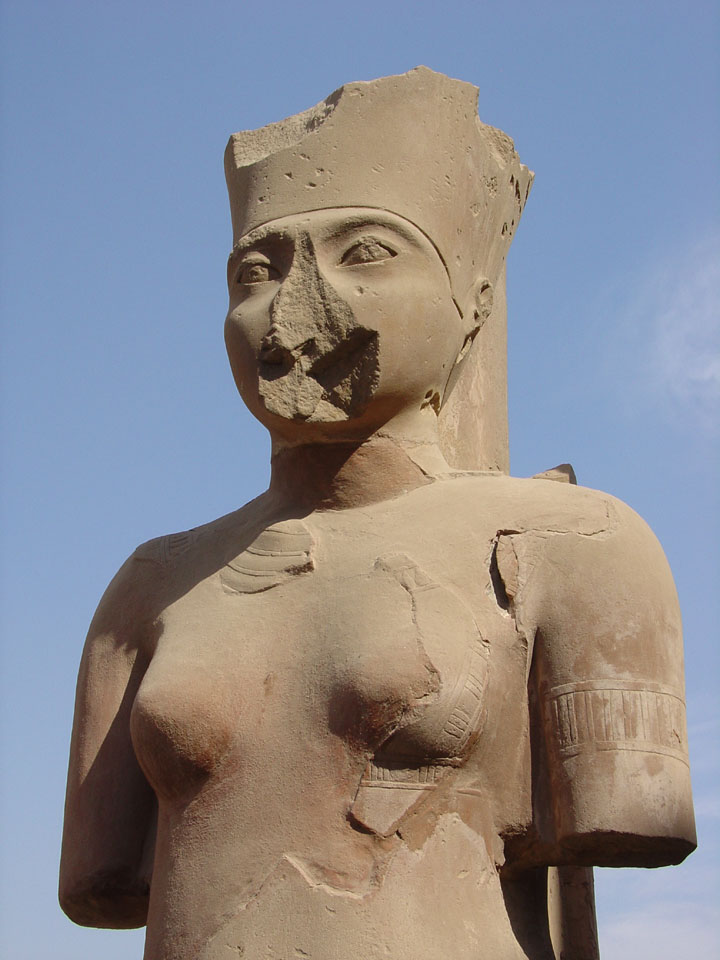 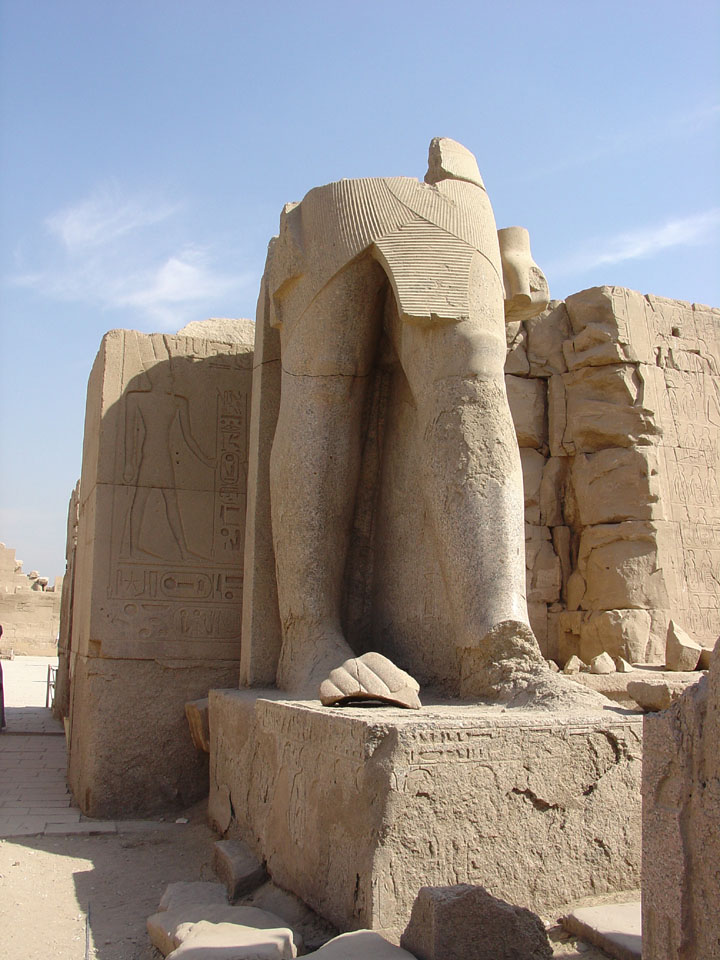 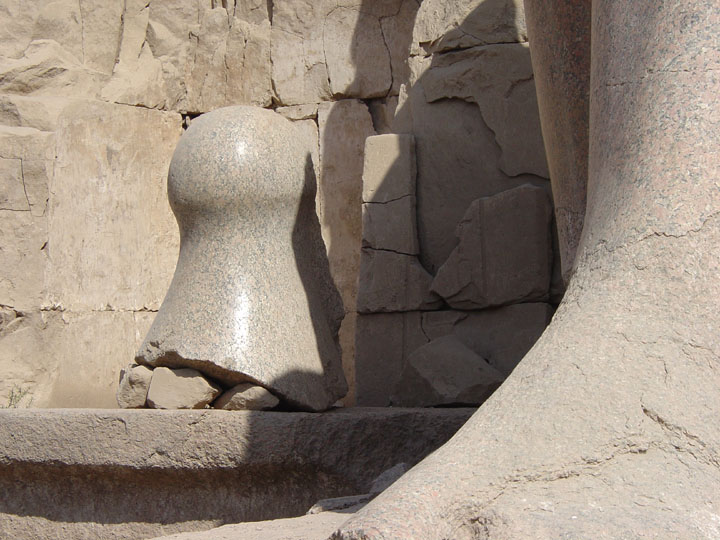 what remains of his headdress 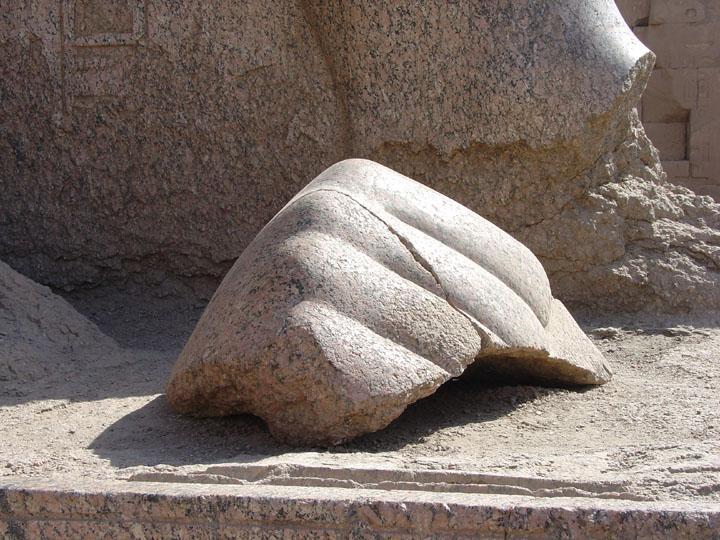 remains of the knuckle 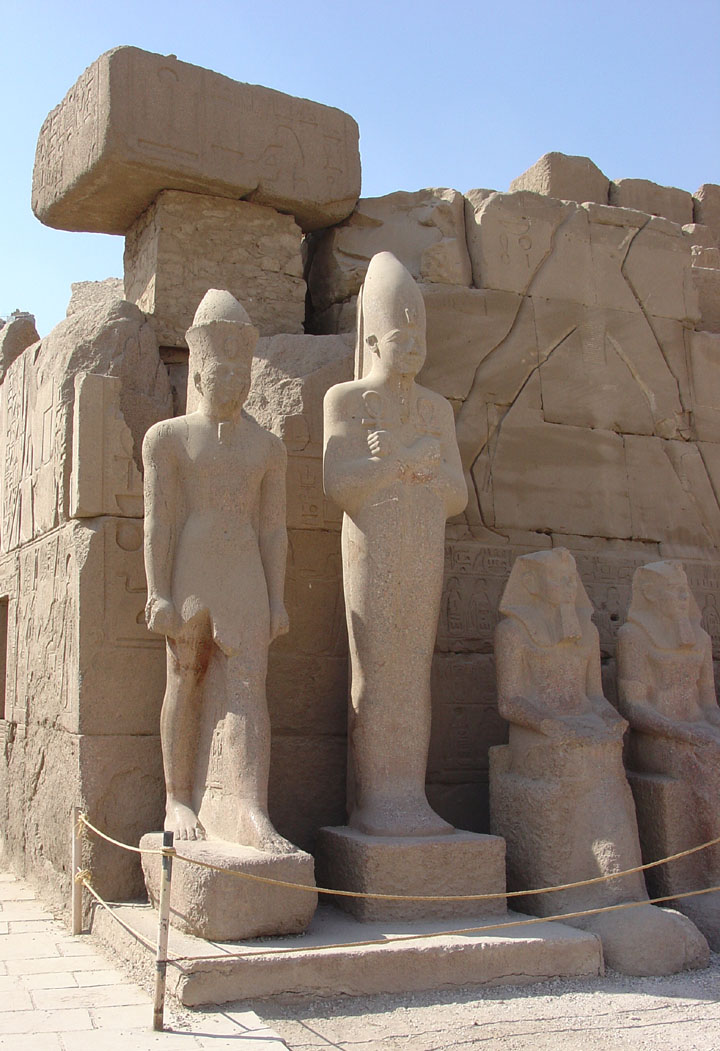 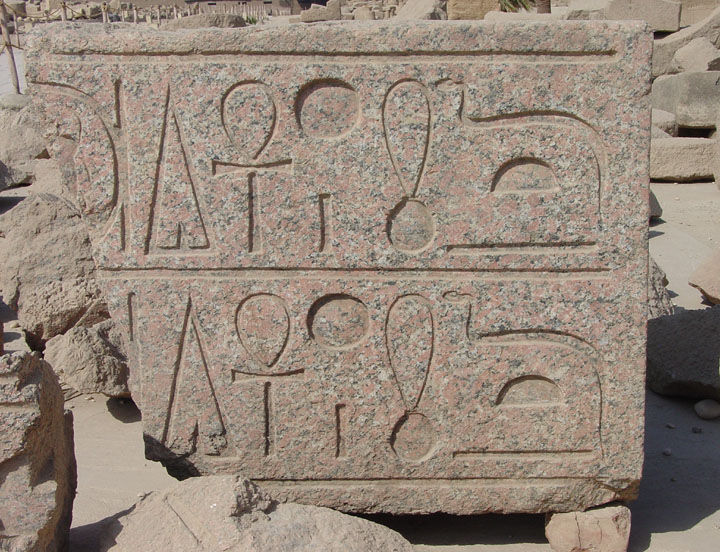 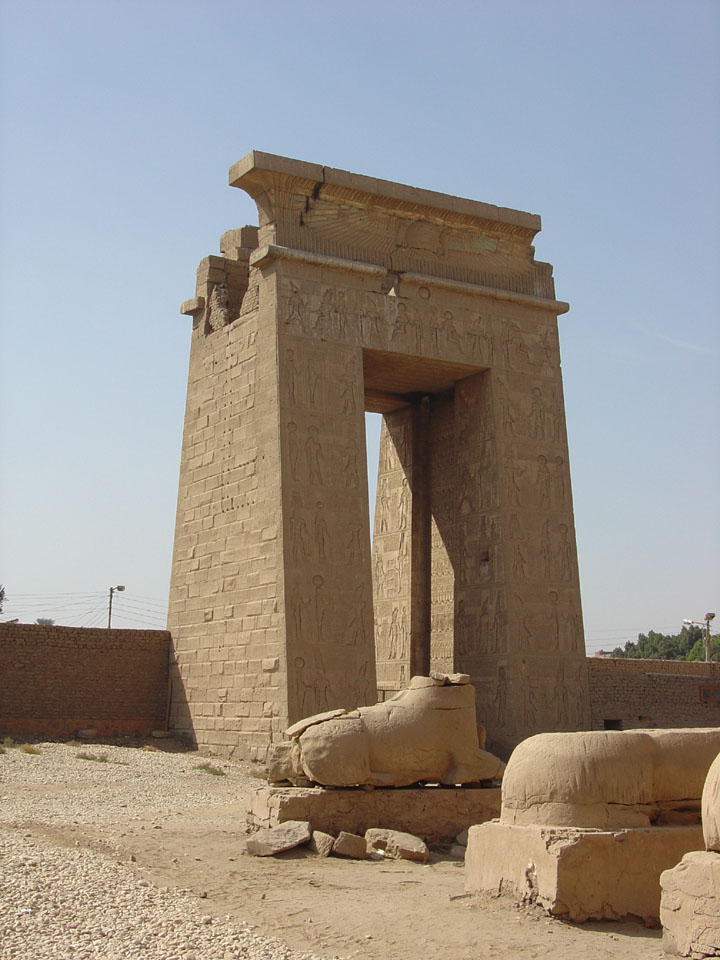 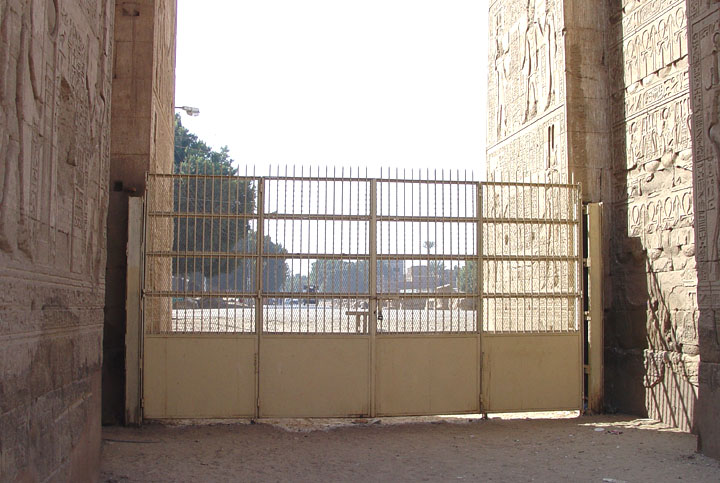 Beyond this gate and outside the main temple walls, the scant remains of Arnenhotep IV’s (Akhenaten) Karnak temple buildings were discovered. 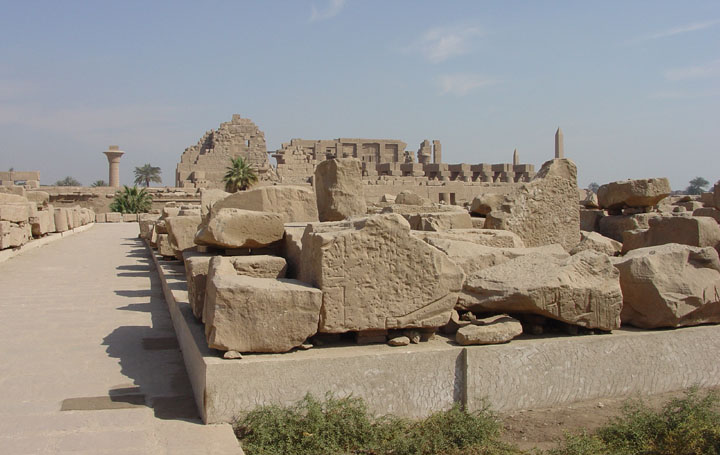 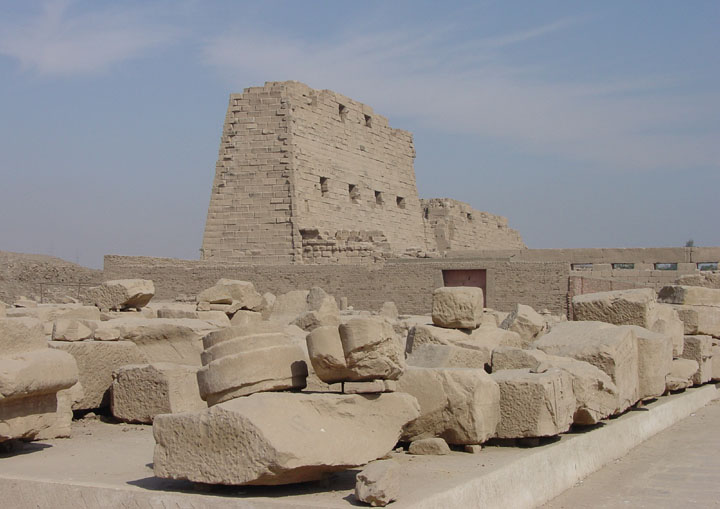 ruins of the Eastern Pylon in background

Open Air Museum which houses various blocks and reconstructed shrines found in other parts of Karnak.

Other Photos of the site 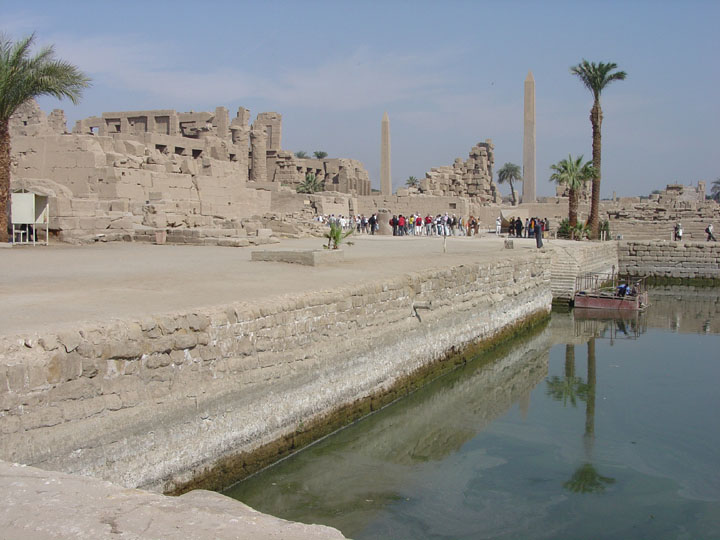 the sacred lake
with the obelisks in the background

More Photos of the Obelisks

On the other side of the Temple of Amen, to the south, the visitor comes to the Sacred Lake. The area in the foreground was originally a fowl yard and the domesticated birds belonging to Amen were driven from here through a stone tunnel into the lake each day. Pylons seven, eight, nine and ten run on a north-south axis to the main temple, called the transverse axis. When the court before the seventh pylon was excavated, a treasure store of 751 stone statues and stelae were found, along with over 17,000 bronzes which now form a large portion of the Cairo Museum collections. 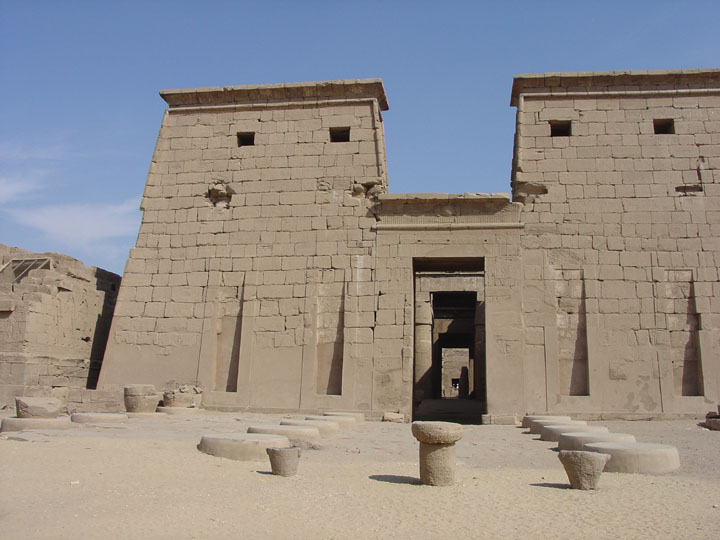 More Photos of the Mut temple

Sites such as Karnak, Dendera and Kom Ombo would most likely fall under the category of “god’s mansion”. While the god may certainly have been worshiped in these temples, it was also his symbolic home, if not considered his physical residence, and the functions of the temple were as much to serve his or her symbolic physical needs as they were for the god’s worship. 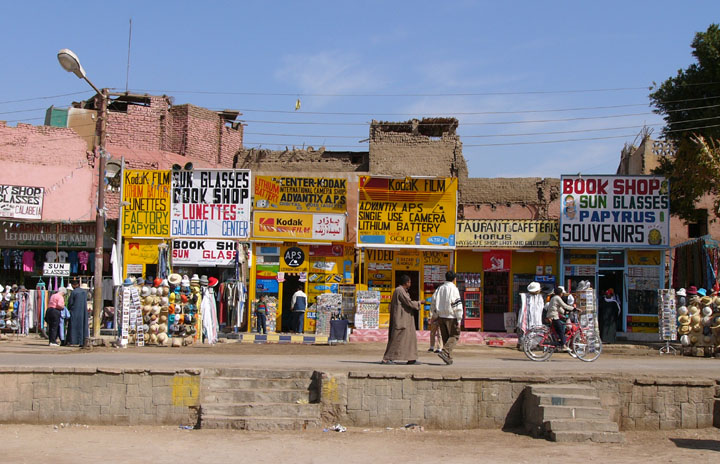 the commercial strip mall at the entrance