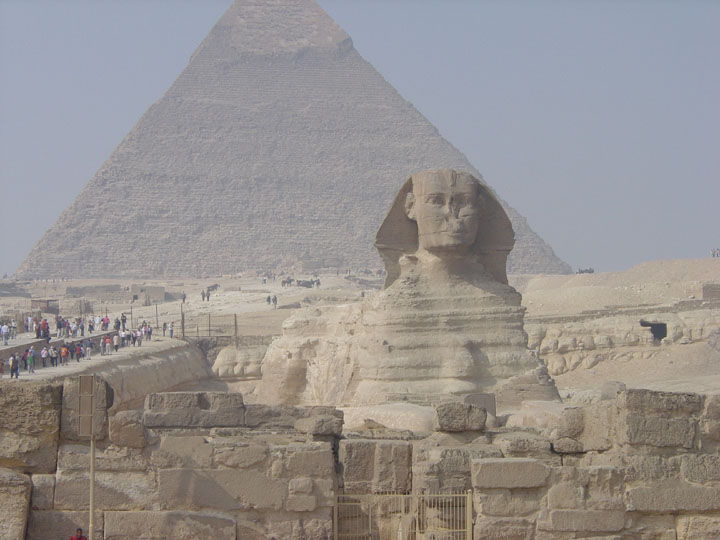 The Sphinx of Giza is a symbol that has represented the essence of Egypt for thousands of years. Even with all of the pictures that we see of the Sphinx, nothing can really prepare you for the time that you finally see the Sphinx with your own eyes. 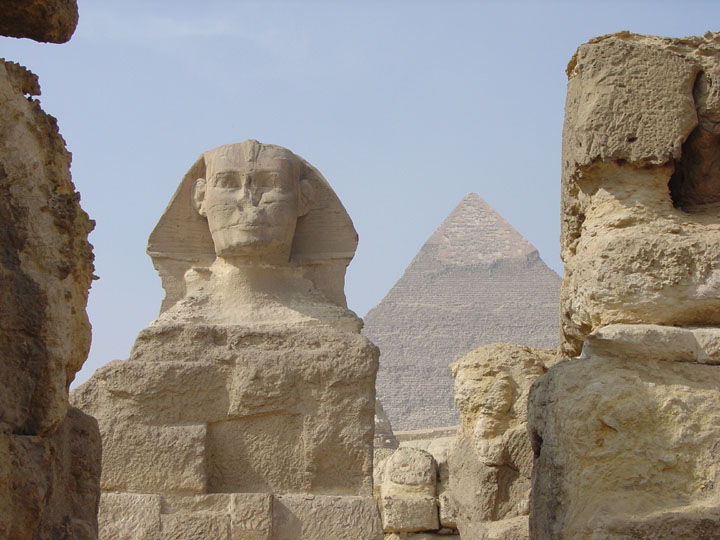 Carved from the bedrock of the Giza plateau, the Sphinx is truly a mysterious marvel from the days of ancient Egypt. The body of a lion with the head of a king or god, the sphinx has come to symbolize strength and wisdom. 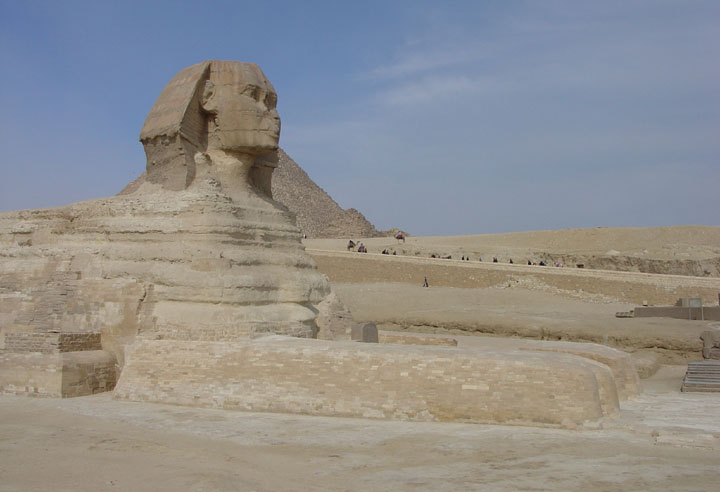 The most popular and current theory of the builder of the Sphinx holds that it was commissioned by the 4th Dynasty King, Khafre (2558-2532 BCE) one of the sons of Khufu (Cheops) who himself is recognized as the builder of the Great Pyramid. The Sphinx lines up with the Pyramid of Khafre at the foot of its causeway. 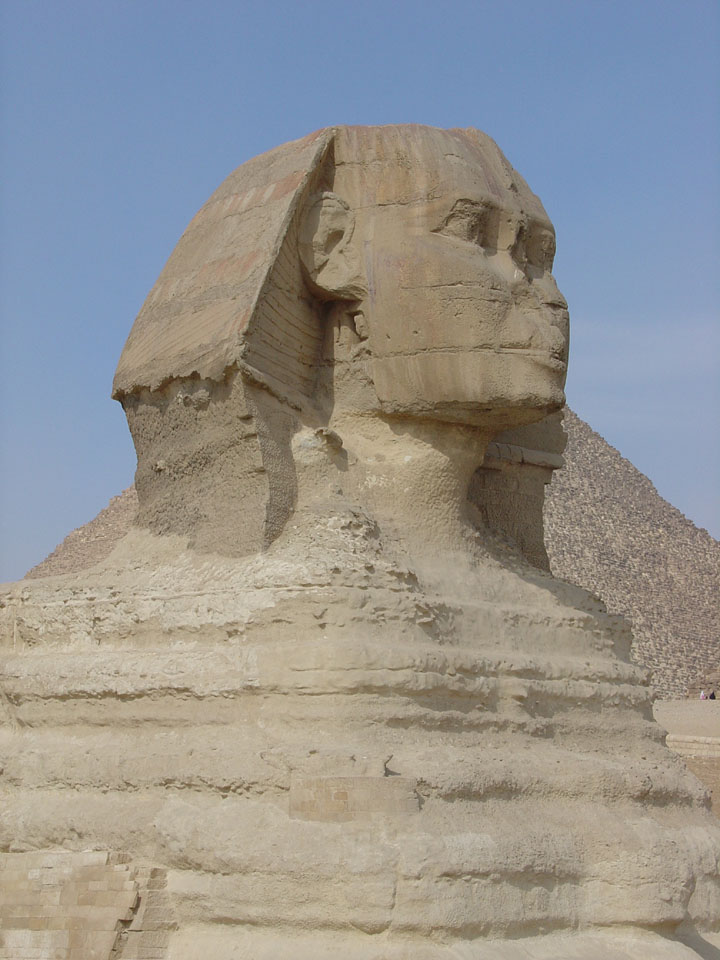 Interestingly, to some, the features of the face of the Sphinx bear a far more striking resemblance to an older brother of Khafre, the Pharaoh Djedefre. Djedefre’s short lived reign occurred just prior to the reign of Khafre. Unlike Khafre, Khafre’s father and later Khafre’s brother Menkaure, Djedefre did not construct his pyramid on the Giza plateau. Instead he built his pyramid at Abu Roash where it now lies badly damaged. Some believe that Khafre usurped the throne of Djedefre and then built his pyramid and Sphinx at Giza. 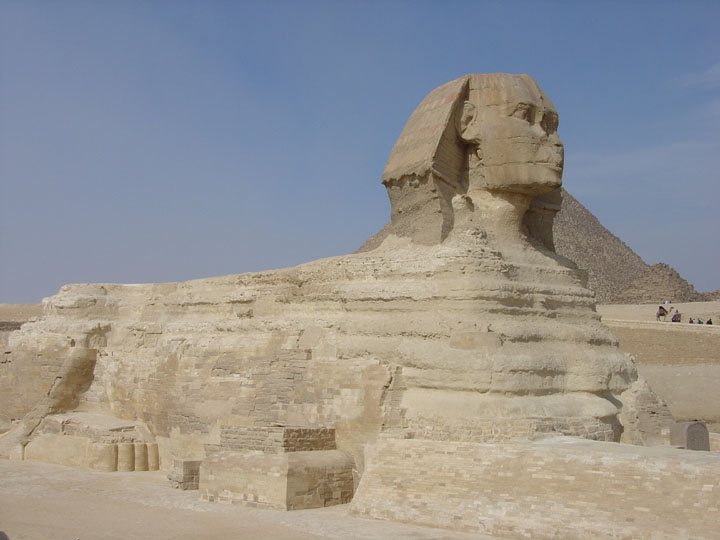 From the north side the profile of the Sphinx reveals the proportion of the body to the head. It would appear as though the head is small in proportion to the body. Because of the changing desert terrain, the body of the Sphinx has been buried several times over the past several thousand years. Most recently in 1905, the sand has been cleared away to expose the magnitude and beauty of the entirety of the Sphinx. 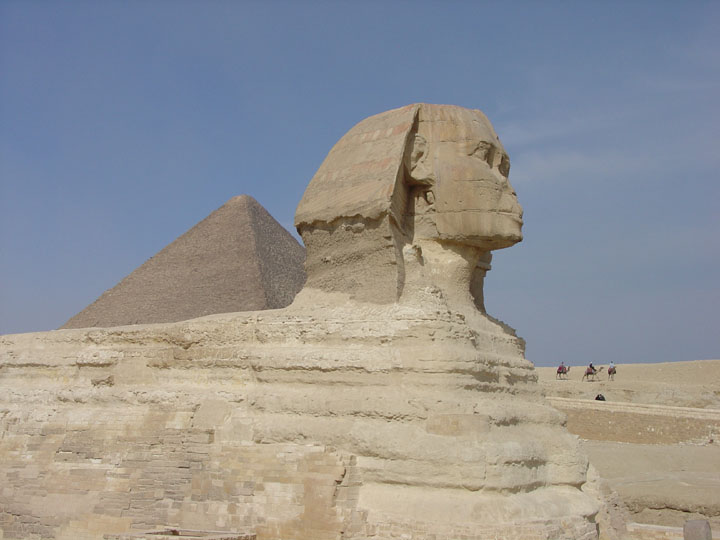 The paws themselves are 50 feet long (15 meters) while the entire. length is 150 feet (45m). The head is 30 (l0 meters) feet long and 14 feet (4 meters) wide. Because certain layers of the stone are softer than others, there is a high degree of erosion that has claimed the original detail of the carved figure. 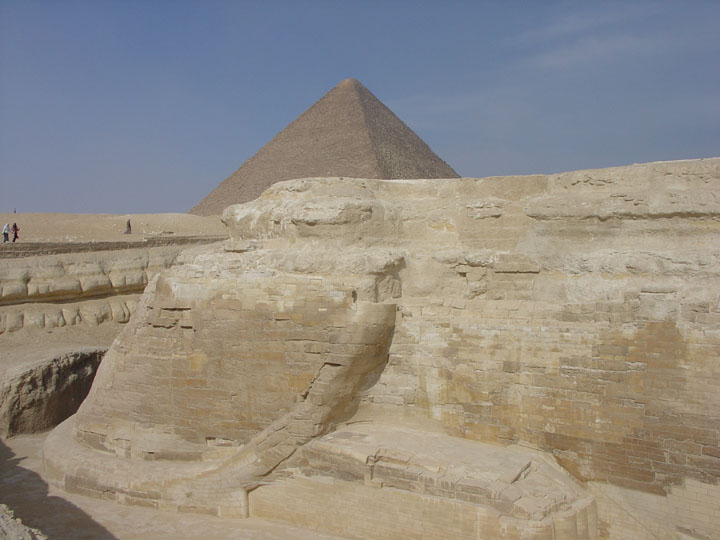 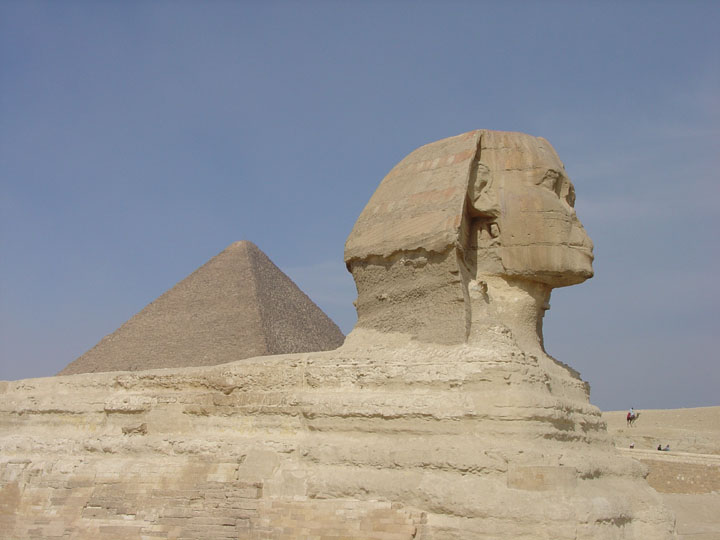 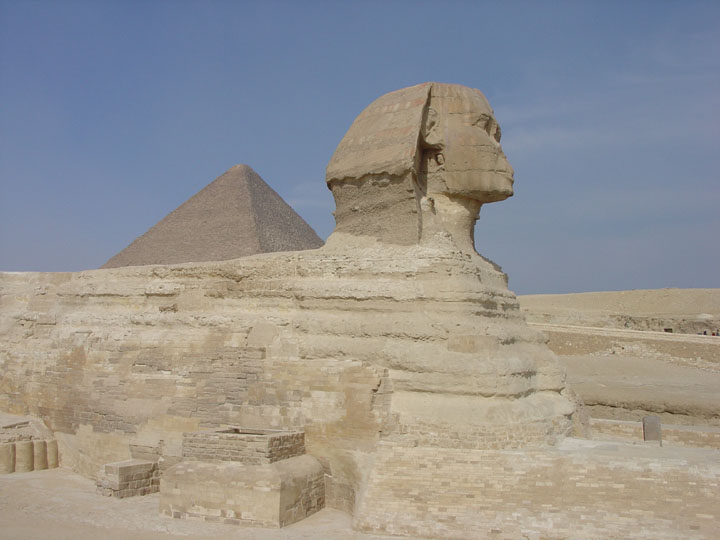 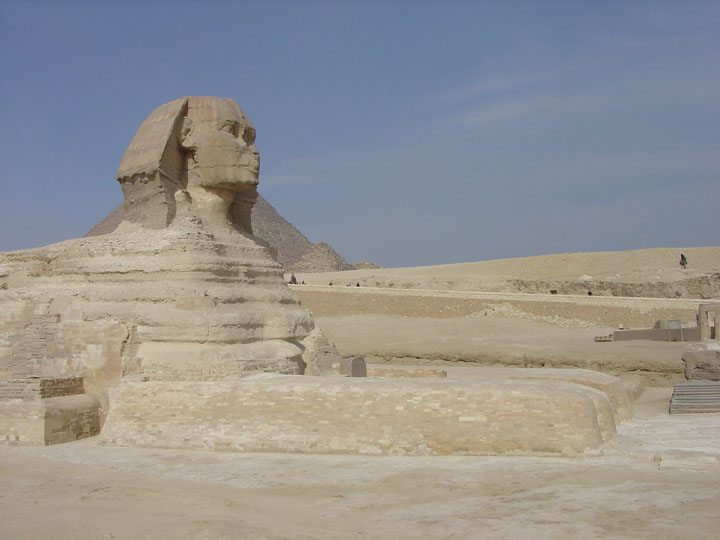 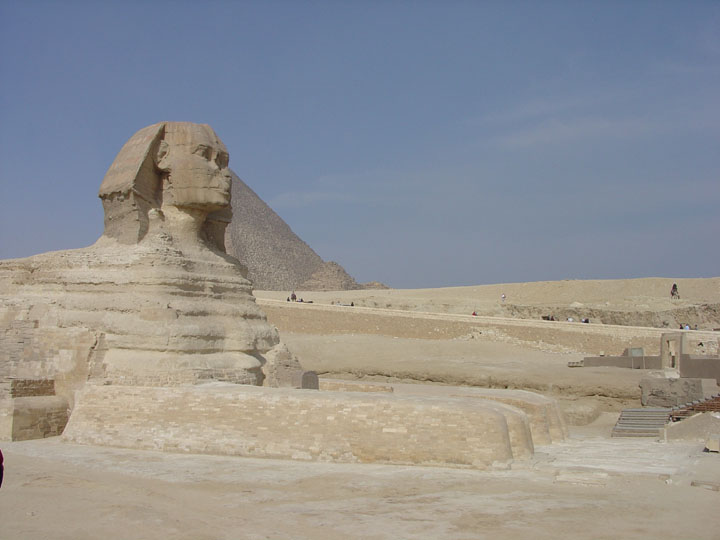 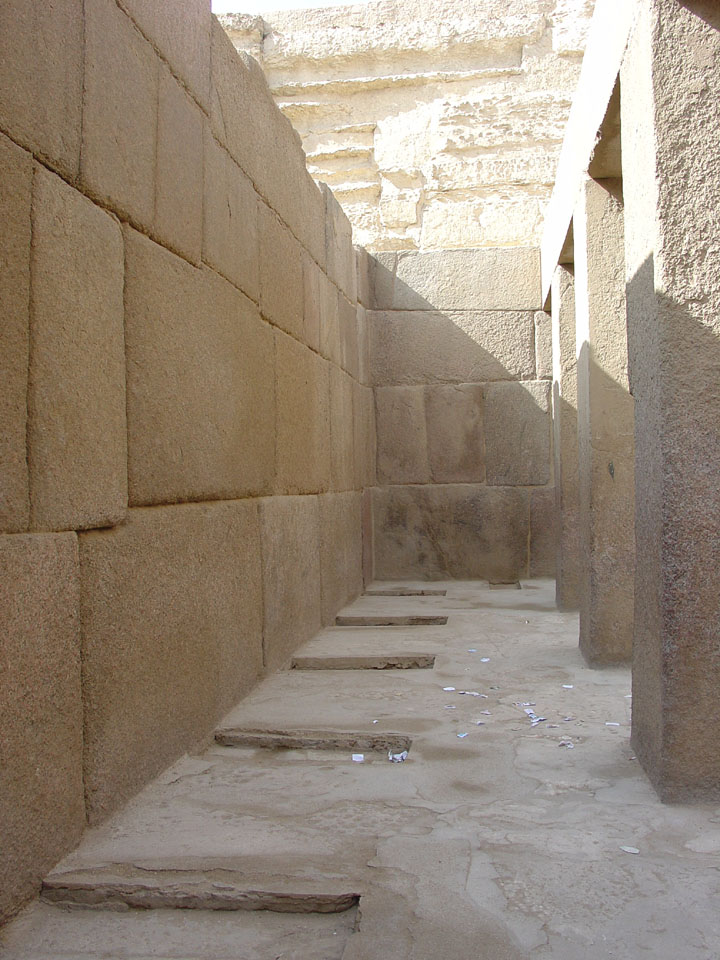 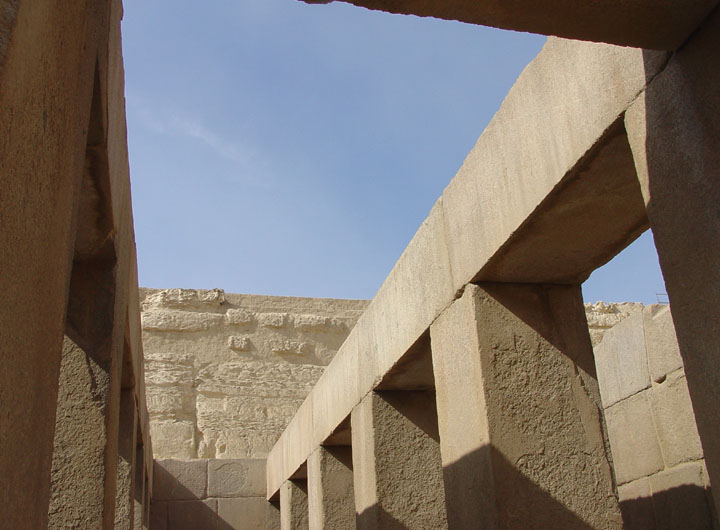 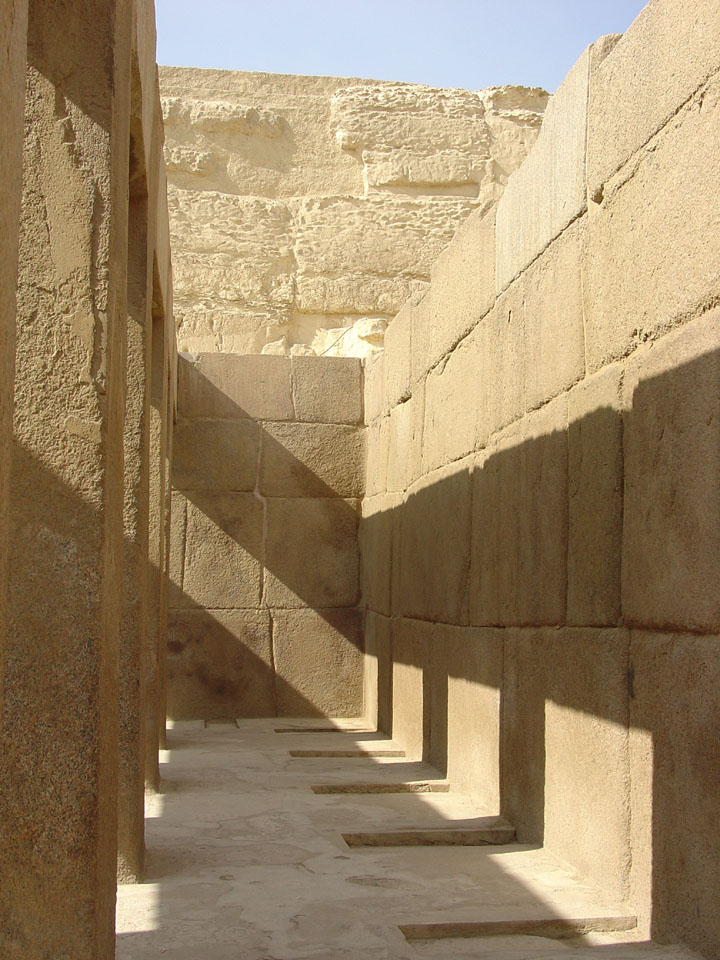 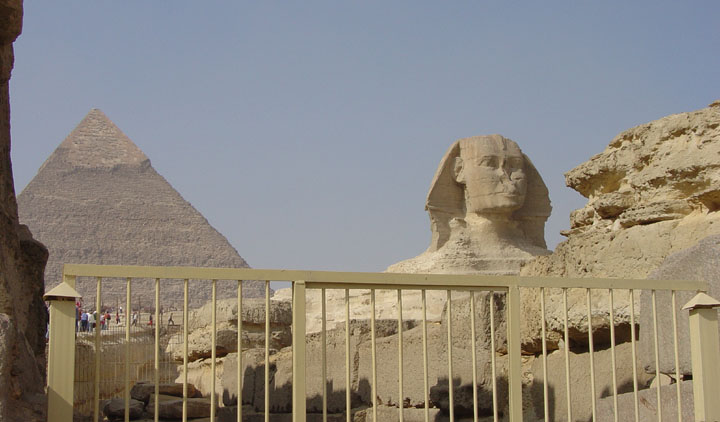 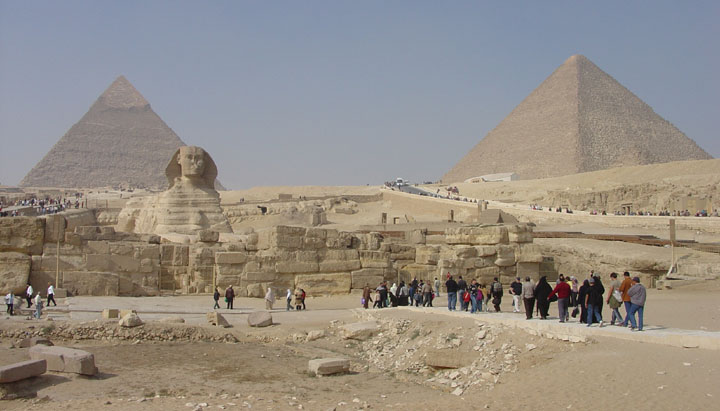 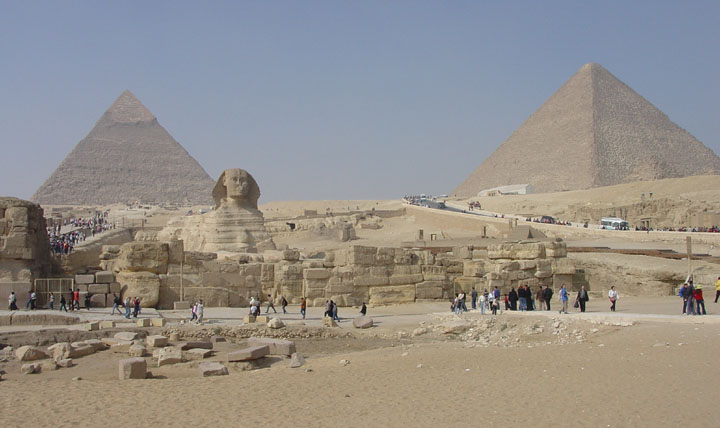 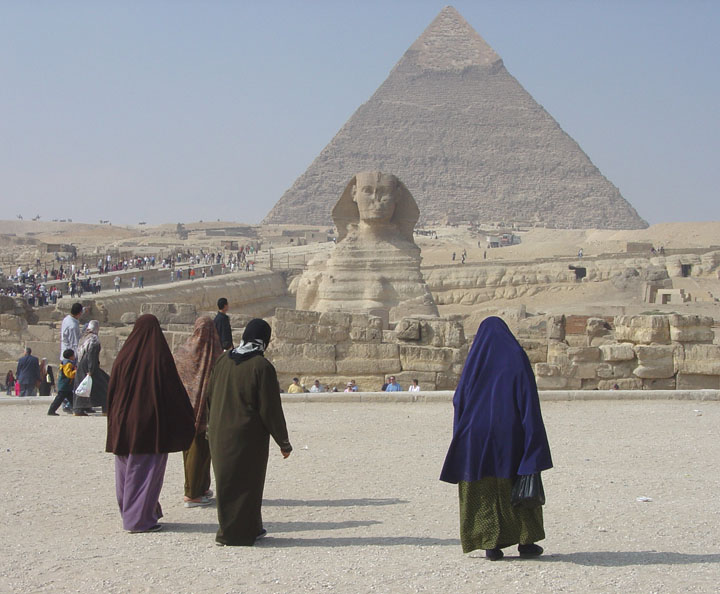