looking toward Annapolis, Maryland and the U.S. Naval Academy

dome of the chapel
(scene of many Midshipmen marriages)

All appointees to the academy must be U.S. citizens (except for authorized appointees from foreign countries), of good moral character, in good physical condition, unmarried, and between the ages of 17 and 22. They must also score above a certain level on standardized academic tests and have acceptable secondary school and college records. The Naval Academy Admissions Board determines the qualifications necessary for appointment to the academy.

About 1200 candidates are appointed to the school each year in the following manner: U.S. senators and representatives, the vice president of the United States, the delegate to the Congress of the United States from the District of Columbia, and the resident commissioner of Puerto Rico may each appoint a maximum of 5 students (known as midshipmen) to the academy at any one time and may nominate up to 10 candidates for each vacancy. The president of the United States annually appoints 100 midshipmen from among qualified children of active and retired career personnel of the armed forces. The president may also appoint children of prisoners of war, of those missing in action, and of deceased or disabled veterans. The secretary of the navy annually appoints 170 qualified candidates from regular and reserve components of the U.S. Navy and Marine Corps; 20 qualified candidates from college Naval Reserve Officers Training Corps (NROTC) units and high school Junior NROTC units; and 10 graduates of designated naval and military schools. Appointments are also available to qualified children of Medal of Honor winners and, in limited numbers, to candidates from Guam, the Virgin Islands, and American Samoa. 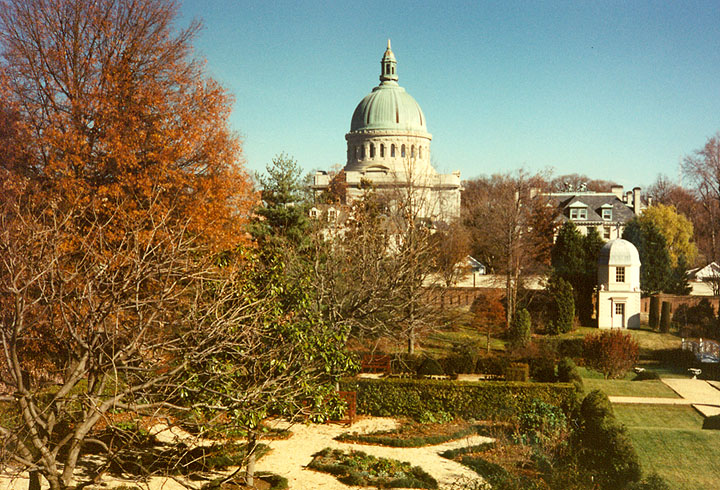 the dome of the chapel seen from the Annapolis Historic District

In addition to tuition and board, midshipmen receive a monthly stipend from the government to cover supplies, clothing, and other expenses. The academy’s four-year program includes courses in engineering, humanities, mathematics, naval skills and tactics, science, and social sciences. Many students spend their summers at sea or learning about other aspects of life in the navy or marine corps. Graduates receive a bachelor of science degree in one of 18 subject majors. They are then commissioned as ensigns in the U.S. Navy or as second lieutenants in the U.S. Marine Corps and must serve at least six years on active duty.