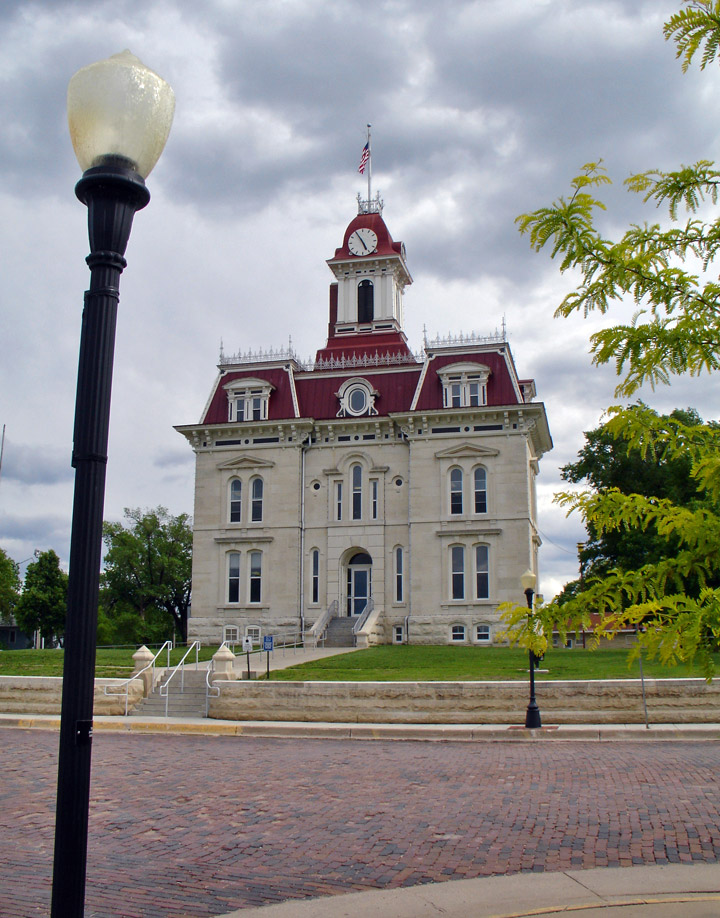 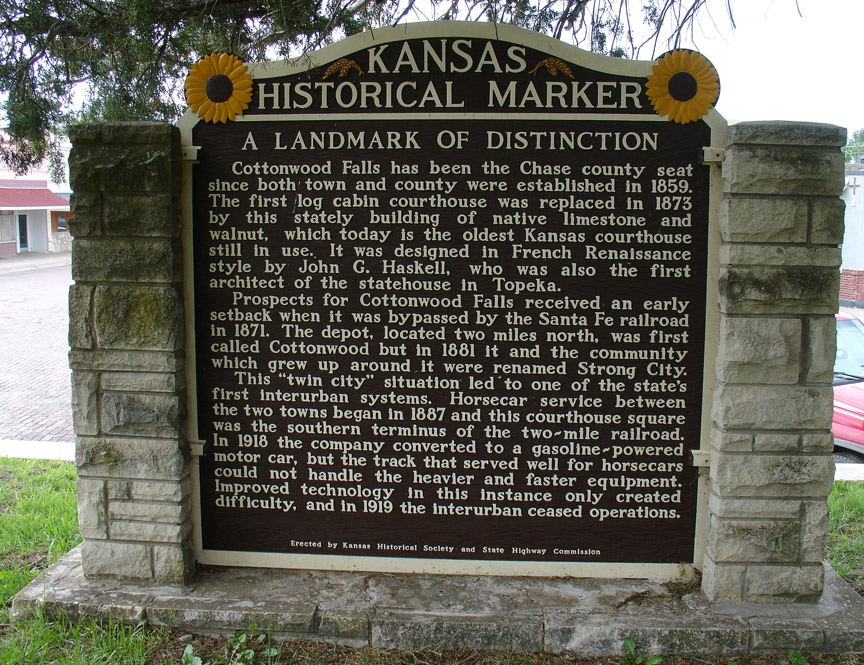 During the decade following the Civil War, Chase County residents knew their county had outgrown its log cabin courthouse and makeshift jail. It must have better quarters for a growing population.

Therefore, at a special election in August of 1871, thirteen years after the county’s formation and with a population of about 600, voters approved a $40,000 bond levy for a new courthouse and jail. The bond issue passed by 64 votes. 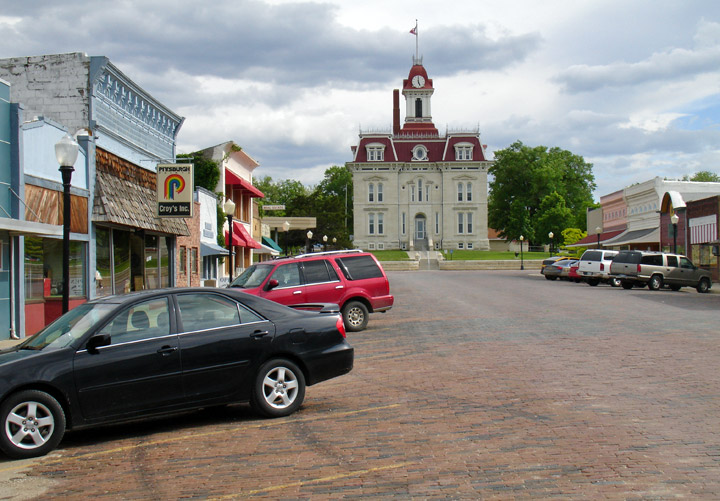 at the end of the main street

From the beginning, the Chase County Courthouse had a remarkable past. A handful of pioneers - a bare majority of voters - dared to dream of a public building which would last a century. 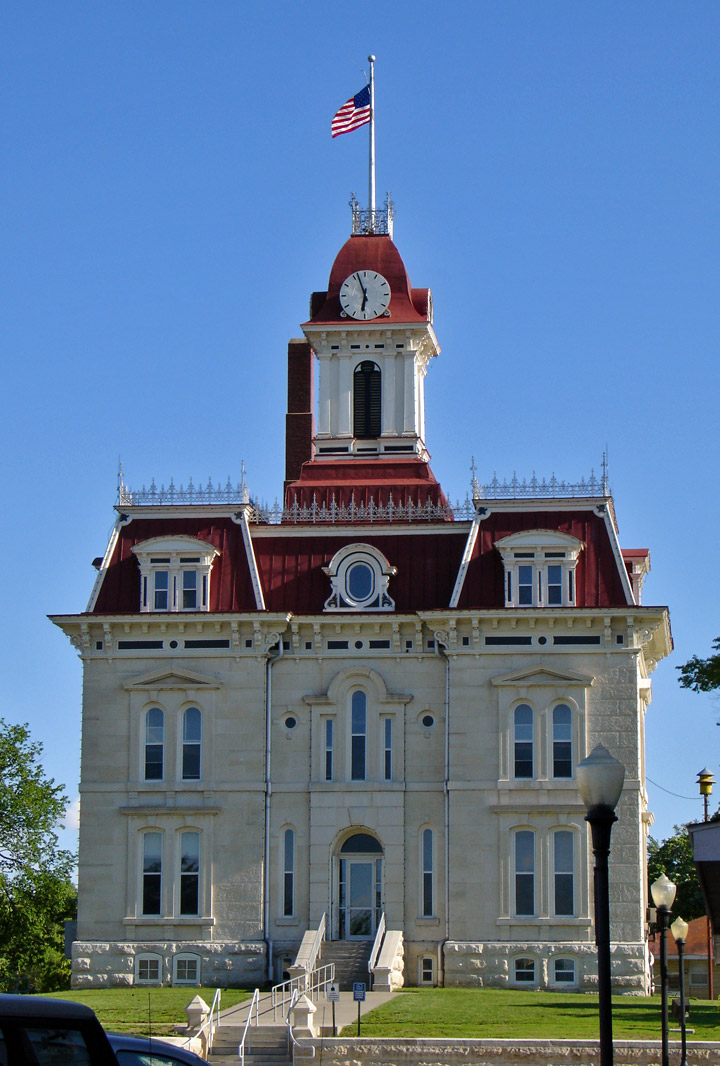 "A people without history is like wind on the buffalo grass." -  Sioux Proverb

After the bond issue passed, Isaac Alexander, one of the county’s more flamboyant settlers, donated two and a half acres of land in Cottonwood Falls (the county seat) to the county with the condition that a combination courthouse and jail be built on his land at the head of Broadway, the hamlet’s main street. Also, he stipulated that the county maintain this ‘Courthouse Square’ for a public park.
Chase County officials were quick to accept his offer. 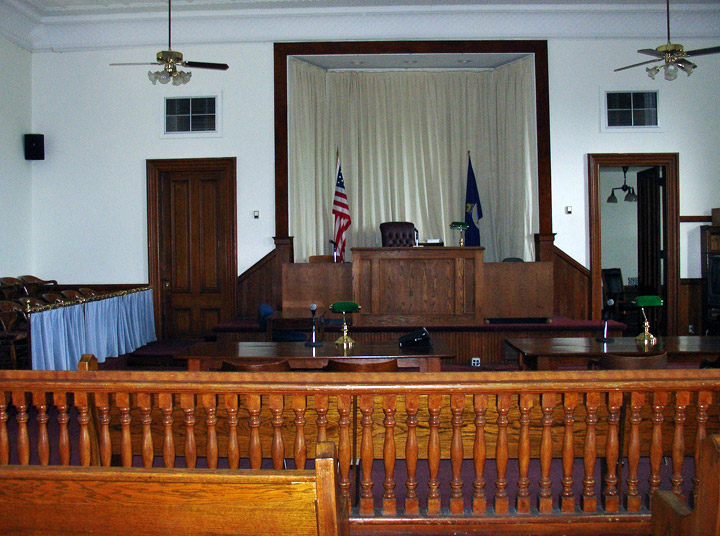 John Bannon of Leavenworth, Kansas, was low bidder for the structure. He, in turn, with the commissioners’ consent chose John 0. Haskell of Lawrence as architect. Mr. Bannon and Mr. Haskell, who was also one of the nation’s foremost architects, envisioned a bold concept in design — a French Renaissance Chateau of the Louis XIII period. Indeed, a daring project in the 1870’s.

These men and their skilled workers toiled two years to build a courthouse which would be unmatched. They spared no expense to erect a building which would serve Chase County for a century or more, a monument to these proud Flint Hills pioneers.
The Chase County Courthouse is the oldest courthouse in Kansas and the Midwest, still in daily use.


‘We shape our buildings; thereafter, they shape us."  -  Winston Churchill 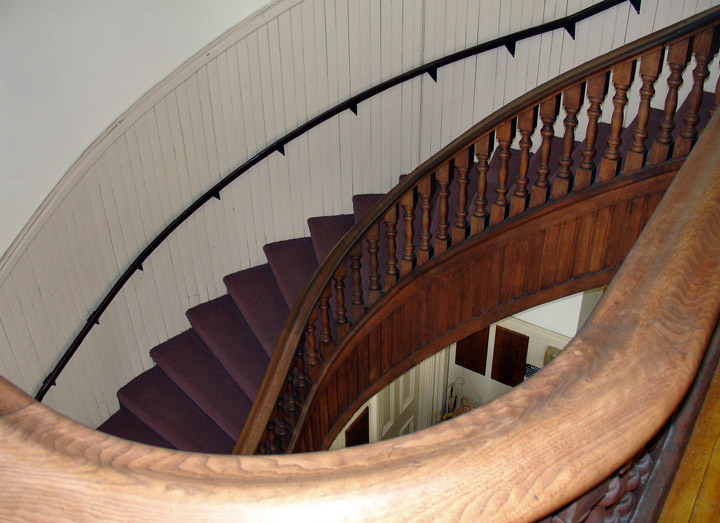 A small colony of sixty workmen came with Mr. Bannon from Leavenworth to build the Courthouse. The contractor knew about the fine magnesium limestone abundant in Chase County. Consequently, he decided the entire three-story structure would be built of this native stone. His masons opened a quarry on Mr. Alexander’s land on Spring Creek, a half-mile west of the site. Bannon and Haskell personally supervised the construction.

All of the limestone was quarried, hand-cut, and fired, then brought to the Courthouse square by horse-drawn wagons. A few of the more massive stones, some weighing from five to seven tons, were quarried two miles west of Cottonwood Station (now Strong City). 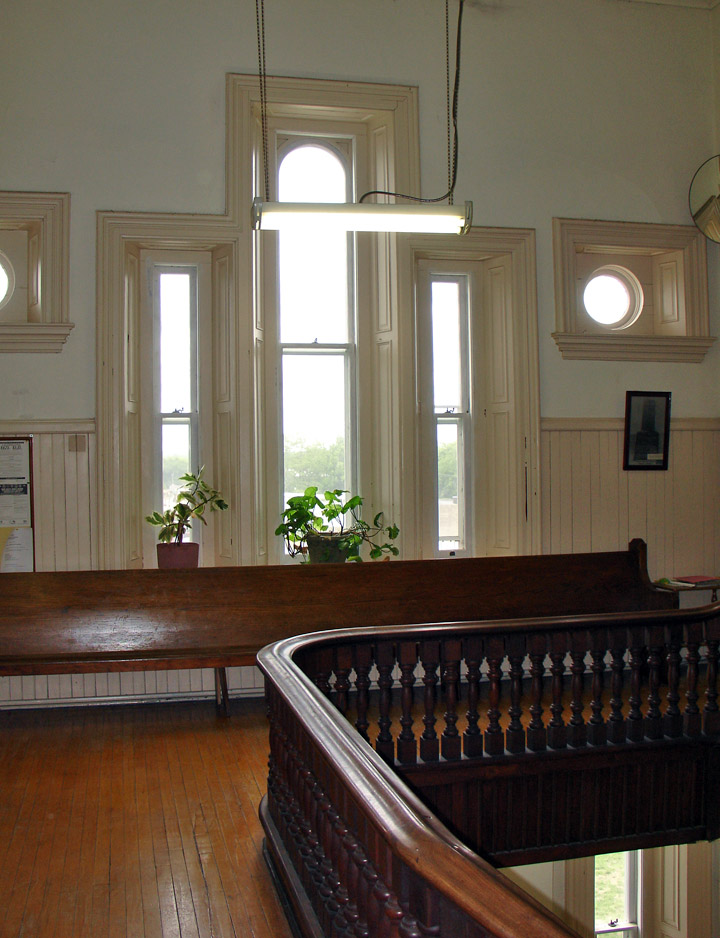 Mr. Bannon’s notes show that these stone masons and carpenters, who worked six days a week for two years, were well-paid for their efforts. They earned $3.50 a day; other laborers received from $1.75 to $2.25 a day.

Chase Countians watched in awe as the three-story structure took shape, a fairy-book French Renaissance castle. The building was like nothing they had ever seen, with its ornate cornices and moldings and the Mansard roof topped with a towering cupola. It was grand!
Finally, on October 8, 1873, the Courthouse was completed. 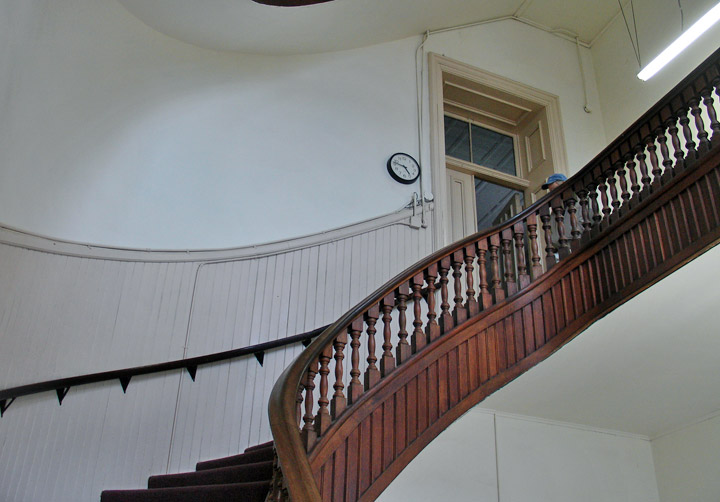 Take a step back in time and stroll through the foyers with the pioneers at the gala ‘open house!’

To celebrate its completion, Chase Countians gave themselves a grand ball in the second floor courtroom on Friday, October 17, 1873. Supper tables groaning with food, were spread in the jail. Families in buggies, men on horseback, traveled from all the nearby villages for the house-warming. 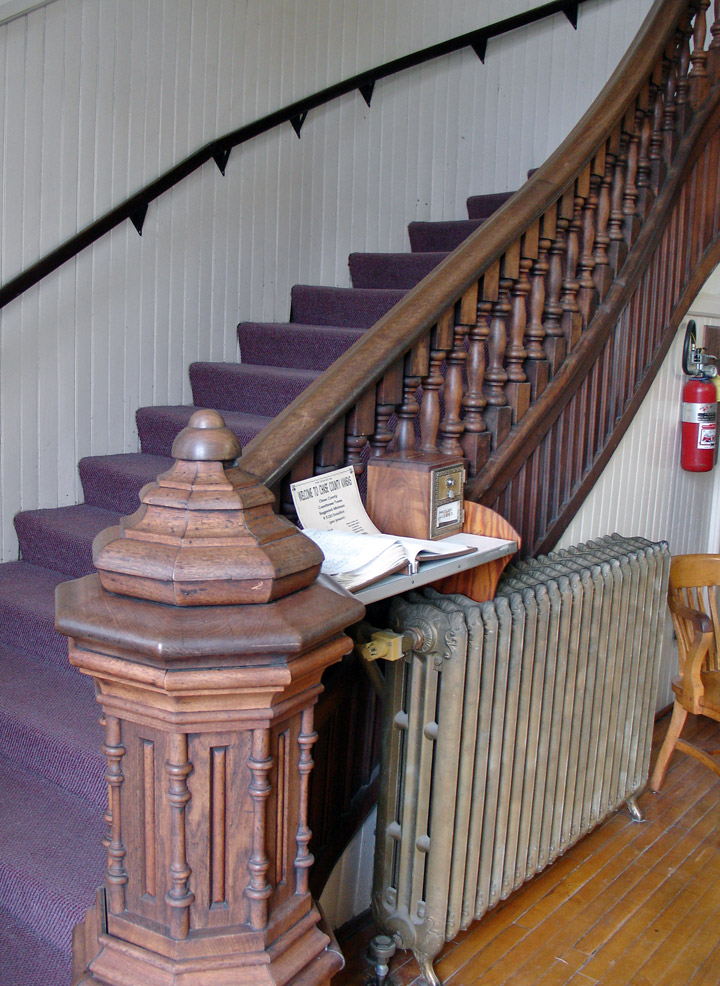 When they entered the tall double doors opening to the main foyer, they gazed at one of the architectural wonders of Kansas or of any state — a spiral staircase which extended from the first to the third floor.

The wide stairway of 53 steps made a full circle for each of the three halls, one directly above the other.

A massive black walnut balustrade, the celebrants observed, was hand-cut from walnut trees growing beside the Cottonwood River. “Incredible,” they whispered. The winding staircase had no center support. 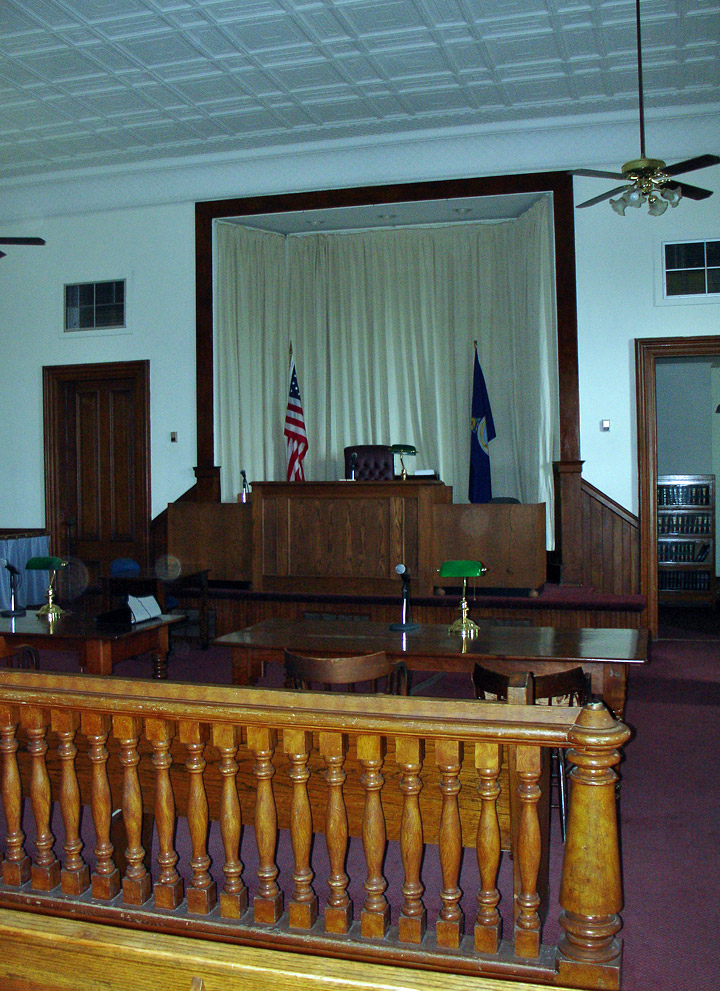 On the second floor, the townsfolk walked through another double doorway into the high-ceilinged courtroom, its ceiling made of embossed tin. Toward the rear, on either side of the judge’s bench, they inspected the jury room and judge’s chamber.

Climbing the staircase to the third floor, they discovered two additional rooms.

Some of the braver party-goers scaled the ladder to the bell tower which enclosed a 500 pound bronze bell. The bell served a genuine purpose. Its peal alerted the townspeople of fires and tornadoes and it reminded them when court was in session. 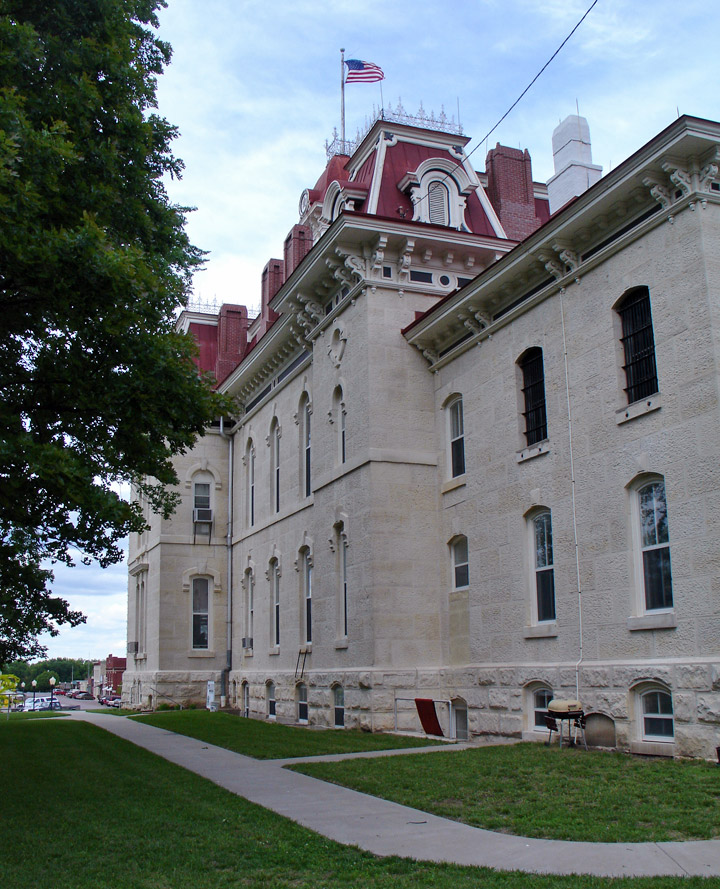 side view of the courthouse

A long rope attached to the bell hung to the first floor foyer.
(After a cupola fire in 1966, the bell tower’s renovations dimmed the bell’s tone; however, sometimes it is rung.)

At the cupola’s north side, a six-foot high clock faces the town’s main street. Each band weighs some 120 pounds and measures three-and-a-half-feet. (Today, time frequently stands still in Chase County. The clock tower, looming 113 feet from the ground, is often a target for a lightening bolt.)

On the third floor, a high, recessed oval window facing Broadway intrigues children who love to crawl into the window nook. With its lofty view, they can watch the happenings on main street or they might gaze at the rolling prairies speckled with wild flowers. 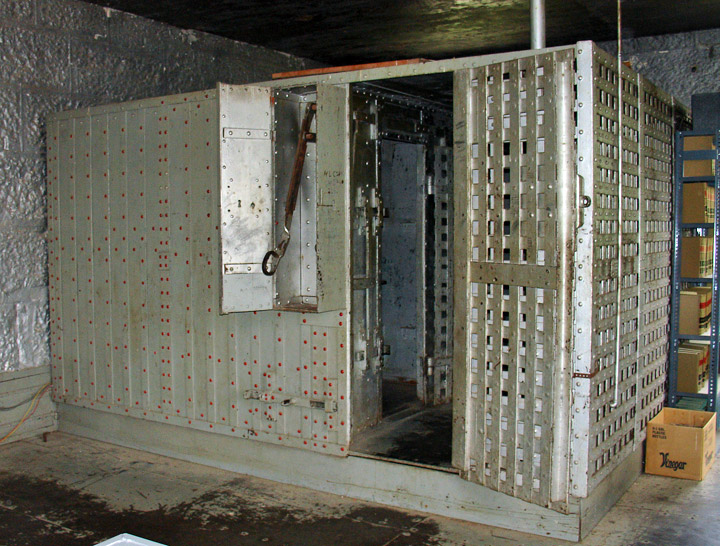 As the people explored the south wing of their wondrous Courthouse, they approved the three-room living quarters for the sheriff and his family. They were proud of the stoutly built jail on the second floor - an improvement from their log cabin jail. The jail’s ceiling and floor were constructed of two by eight inch oak planks laid on edge, then spiked side by side. The floors were then covered by sheet metal. A solid steel door opening on the hallway made the most ‘hardened outlaw’ forget his notions of a jailbreak.

The jail would serve the county’s malefactors for a century until the mid 1970’s when new state statutes closed the jail forever.

On the south, another walnut staircase, a smaller version of the north staircase, provided access from the basement to the second floor. People discovered a walk-In attic above the jail. This attic contained a large wooden plank cistern used to collect rain water from the tile roof. 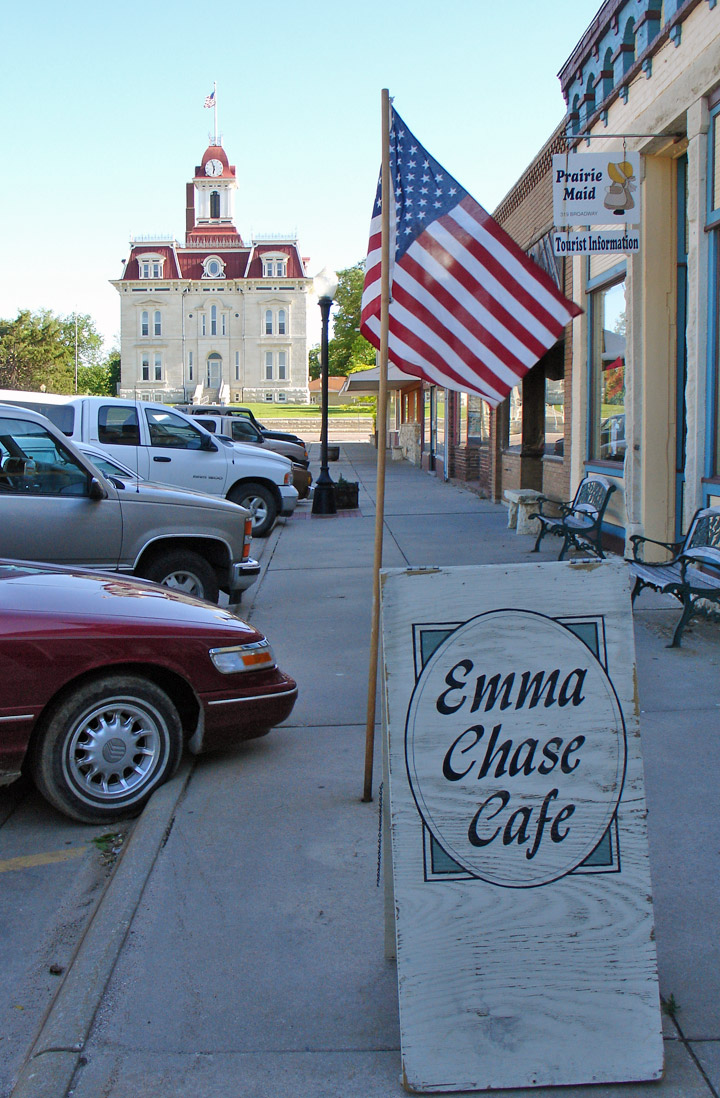 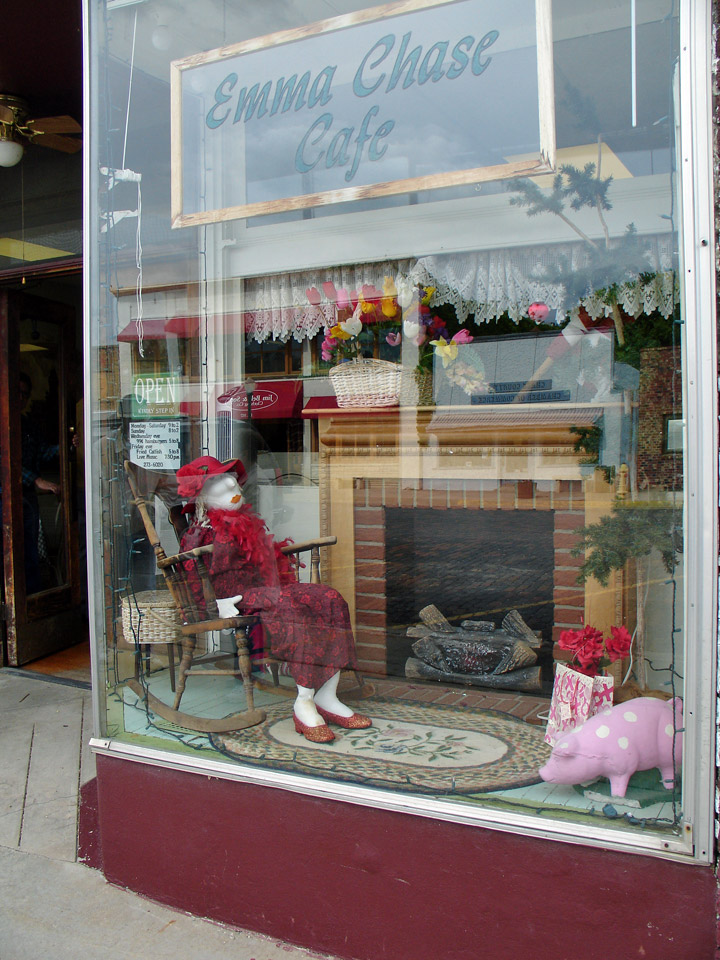 The party-goers found the basement stairway leading from the main foyer. The basement with dirt floors held the coal bins and vaults for county records, and according to many -rats!

(An old vault still remains in the basement corner guarding county records. Another unusual vault in the Register of Deed’s office, circa 1910, Is two stories high with a glass brick ceiling!)


As Chase Countians toured their new, majestic Courthouse from the basement to its towering cupola, some dare-devil boys, the story goes, raced each other around the wide ledge on the roof or took turns sliding down the walnut banister. Young and old alike were convinced that the building, which they bad sacrificed to build, was unparalleled. Today, over a century after the builders and masons and carpenters finished their work, the Chase County Courthouse continues to ‘serve the people well.’ 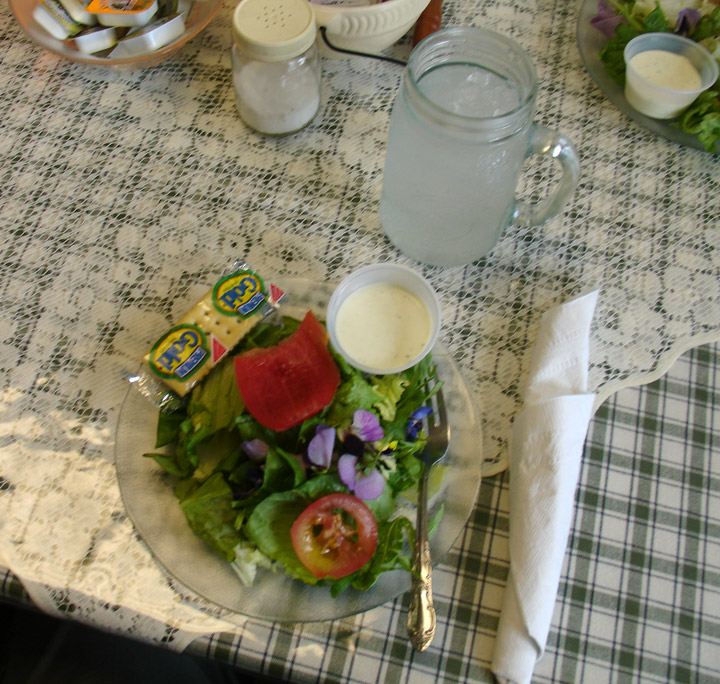 colorful salad at the cafe

Native limestone, used In the building, has been shipped to every state In the country where It may be found in scores of famous public structures, Including the Capitol Building In Washington D.C. and the Topeka State House.

Each year over 6,000 visitors from every state and from many countries visit the Courthouse, marveling at its architectural design, the stonework and the spiral staircase in the same way as did the pioneers In 1873.

In 1971 the Courthouse was entered in the National Registry of Historic Places and the Kansas Historical Site register.

Unmatched In durability and design, the Courthouse remains a living tribute to its builders and the Flint Hills pioneers who dreamed of a Courthouse which would stand a century.

Their legacy belongs to everyone.
(From Chase County Historical Sketches, Vol. 1) 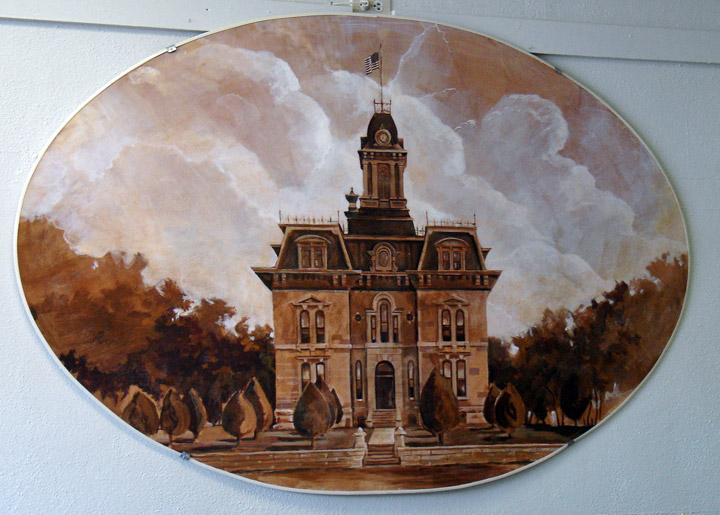 painting of the Chase County courthouse 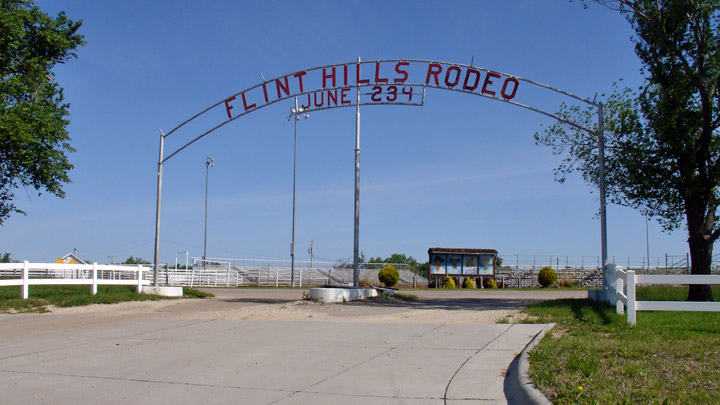 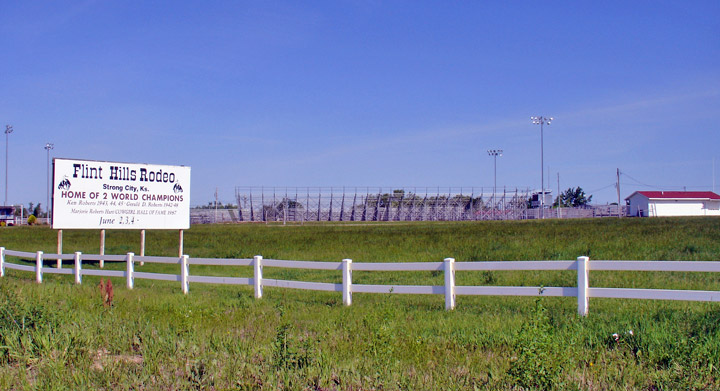 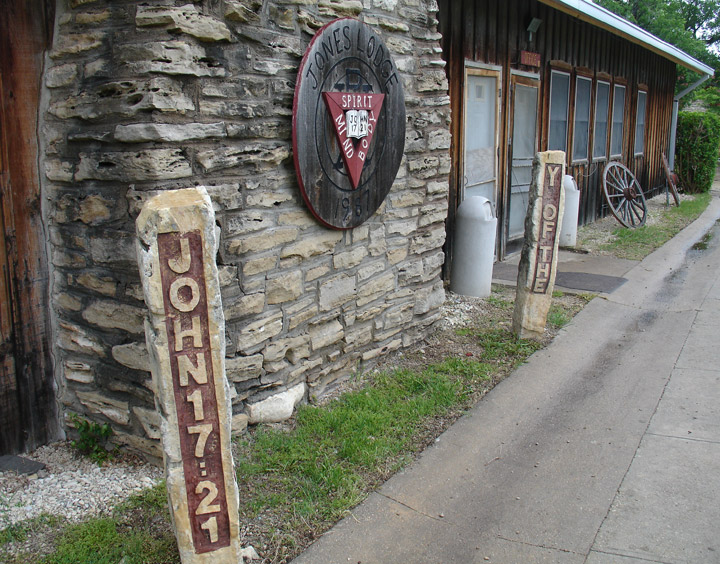 a YMCA camp in Chase County 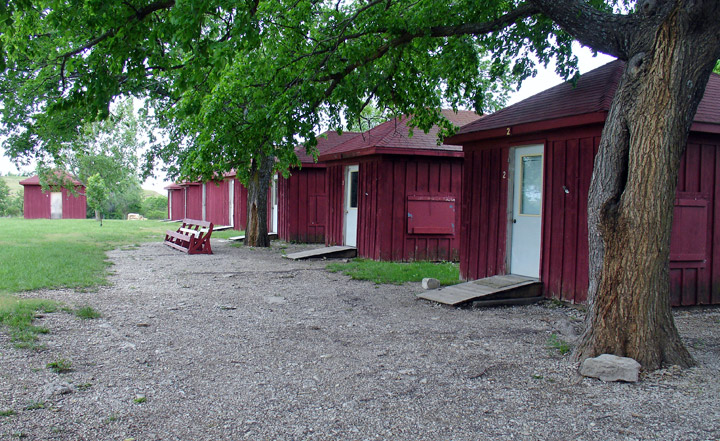 cabins for the youth during the summer season