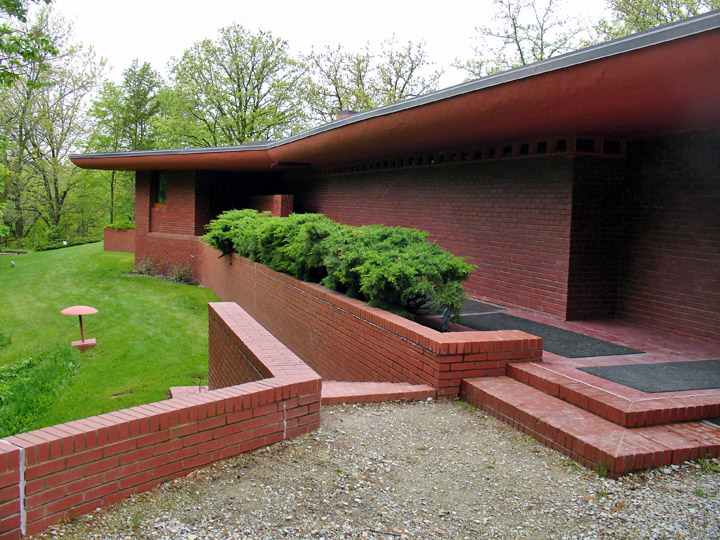 When Iowa businessman Lowell Walter died in August of 1981, he and his wife, Agnes. left their dream home, Cedar Rock. to the Iowa Department of Natural Resources and the people of Iowa. Designed by the famed architect Frank Lloyd Wright, the residence lies on a limestone bluff overlooking the Wapsipinicon River near Quasqueton in Buchanan County. 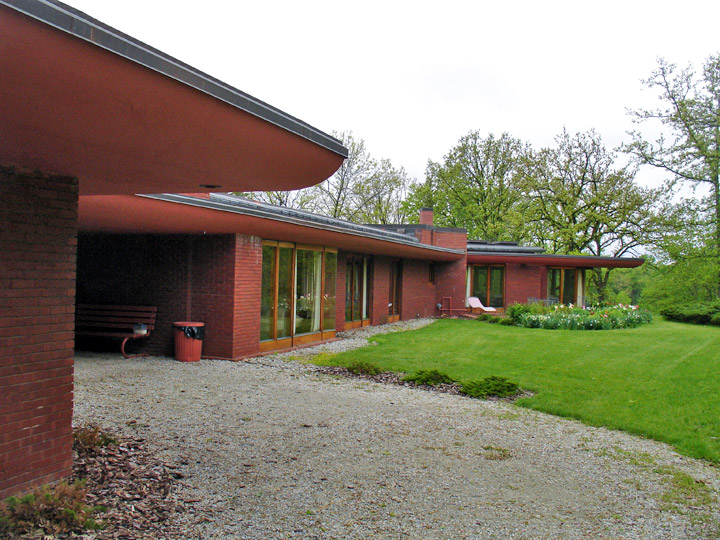 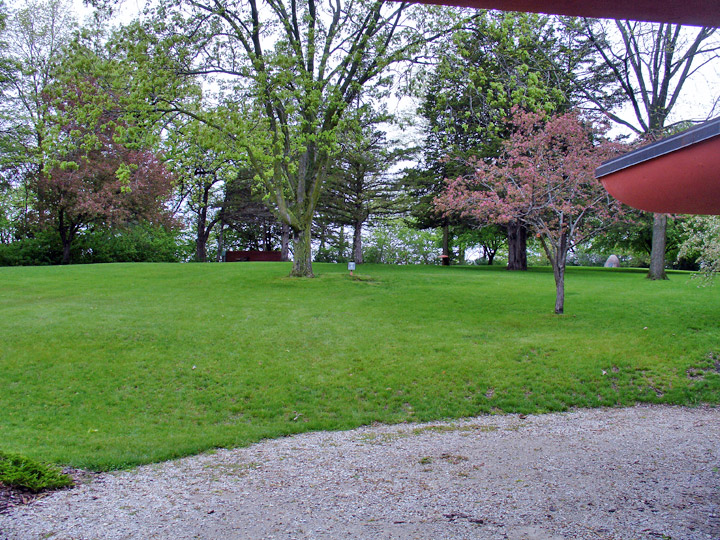 looking over the landscaped hill top

The Walter House was one of Wright’s most complete designs. Nearly everything at Cedar Rock bears the architect’s imprint. Wright designed the furniture. selected the carpets. chose the draperies .and even picked out the accessories. Cedar Rock was begun in 1948 and completed in 1950. Its roof and floors are concrete; the walls are brick, glass. and walnut. Cedar Rock is one of ten buildings Wright designed in Iowa. 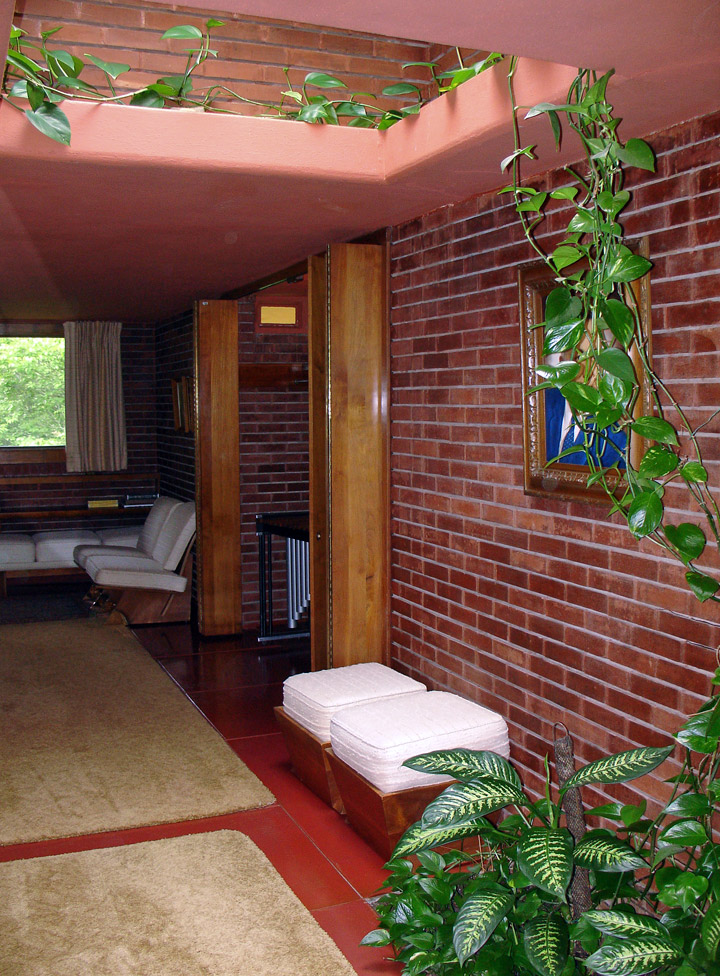 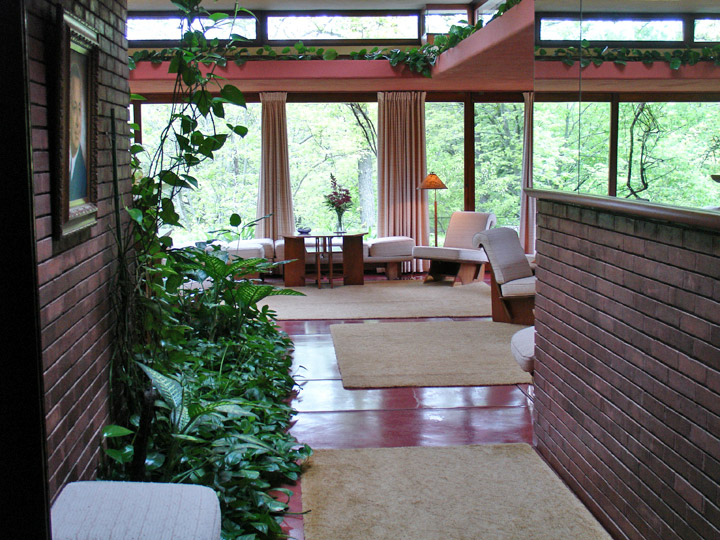 looking into the Garden Room

The Walter House is an example of a simplified style of house Frank Lloyd Wright developed and called "Usonian.” The Plan for the Walter House follows the characteristic “tadpole” form, typical of Wright’s Usonian homes - the bedroom wing of the house constituting the tail of the “tadpole” and the living/dining room the head. The house is one story and the overall length is about 150 feet Everything about the Walter residence is compact and efficient - everything that is, but the combination living/dining room which Wright called “the Garden Room.” The Garden Room covers more than 900 square feet and has a fireplace which can hold five-foot logs. 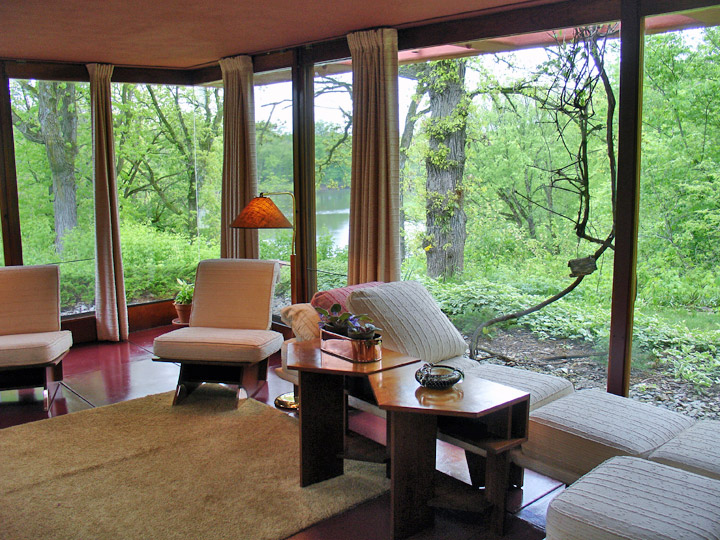 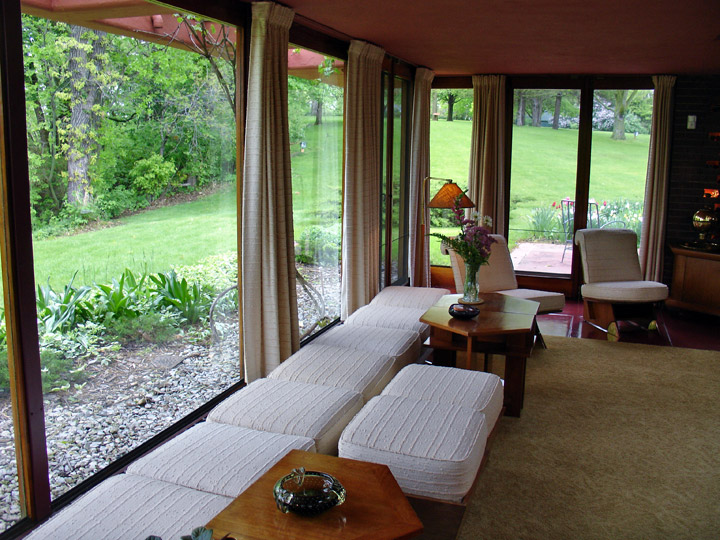 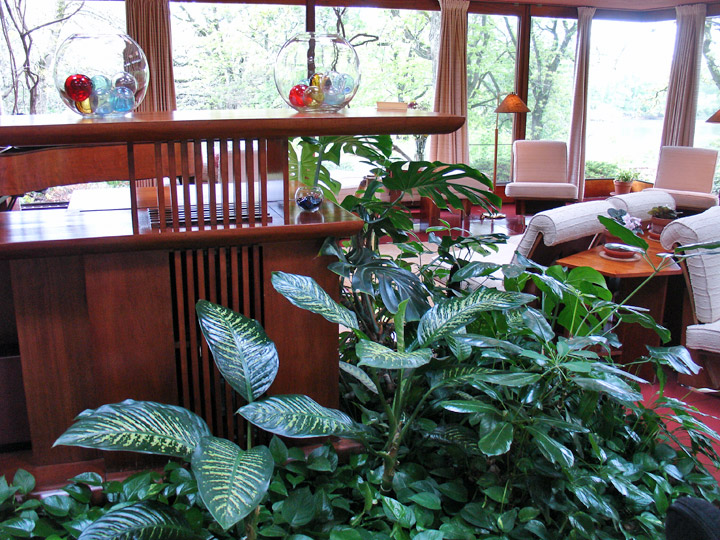 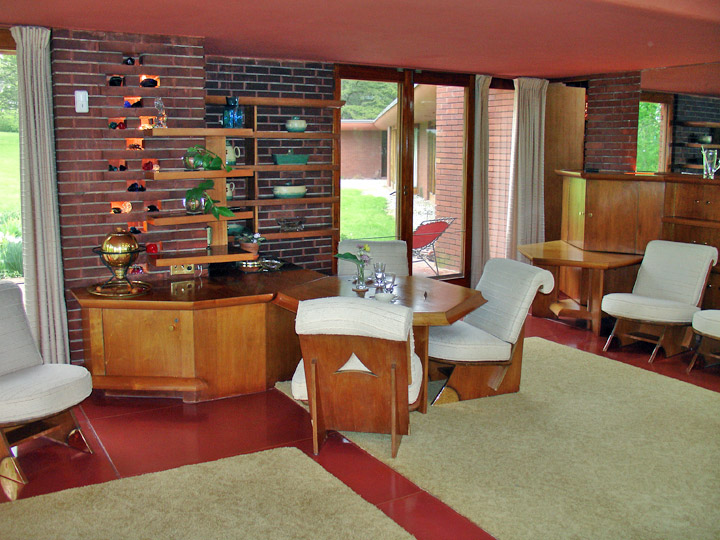 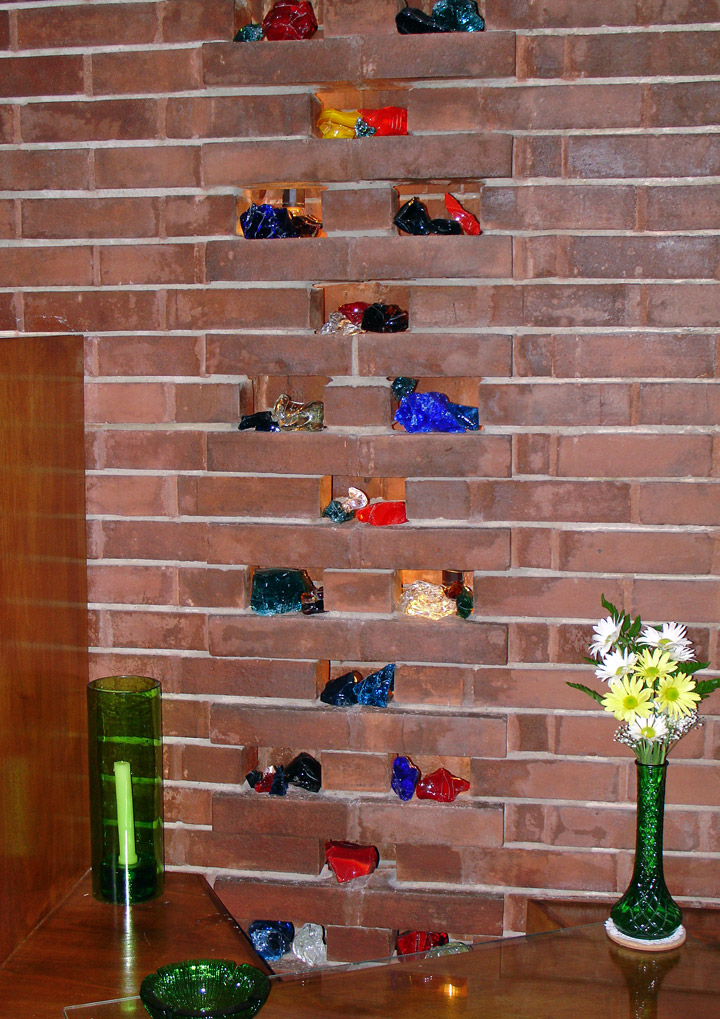 There are openings in the overhangs covered with vines for summer shade. Clerestory windows or skylights are incorporated in every room to brighten interior spaces and release hot air trapped near the ceiling. Recessed artificial lighting creates the effect of natural light, even at night 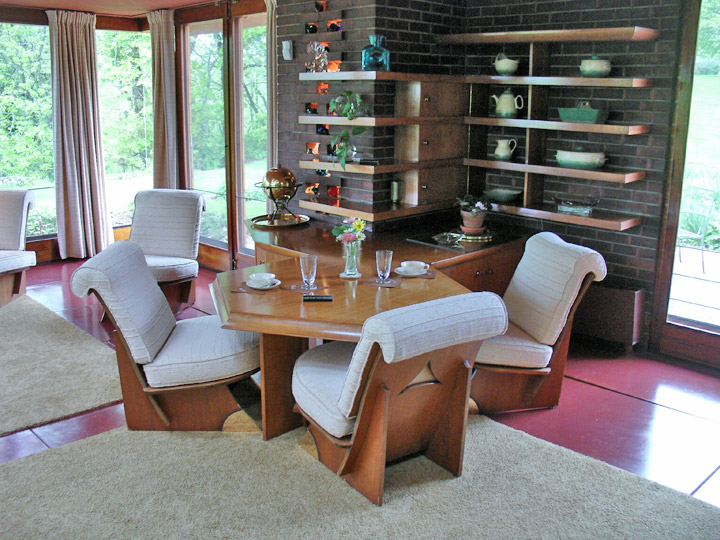 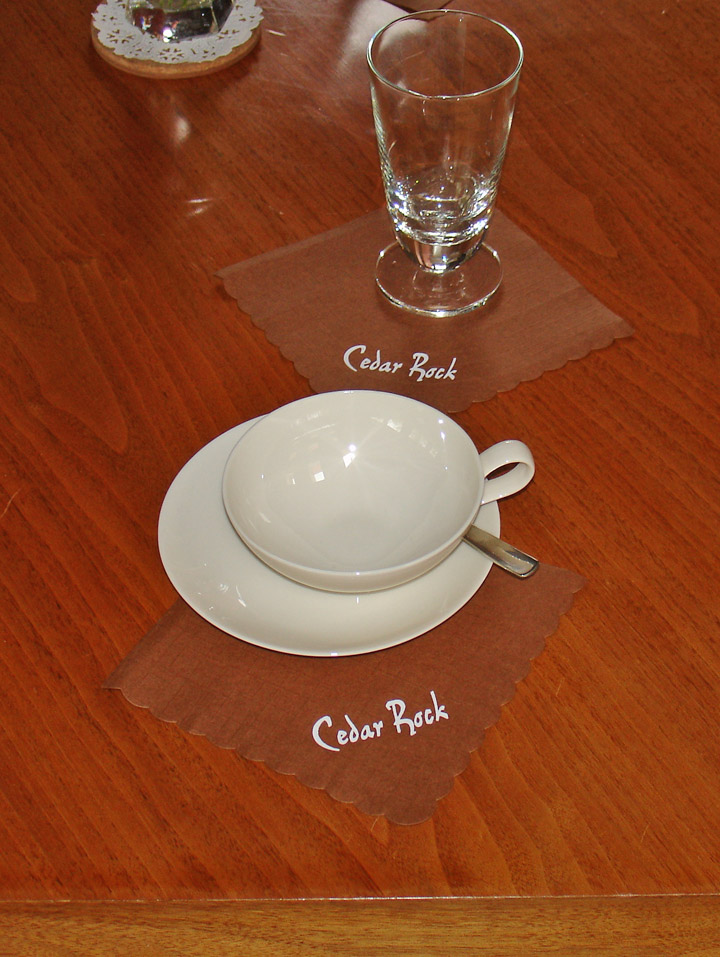 In addition to the house, the wooded 11 acre site contains a boathouse and a fire circle, also design by Wright.  Cedar Rock is an important example of the Midwestern residential style developed by Wright, characterized by its provisions for living simply and in harmony with nature. 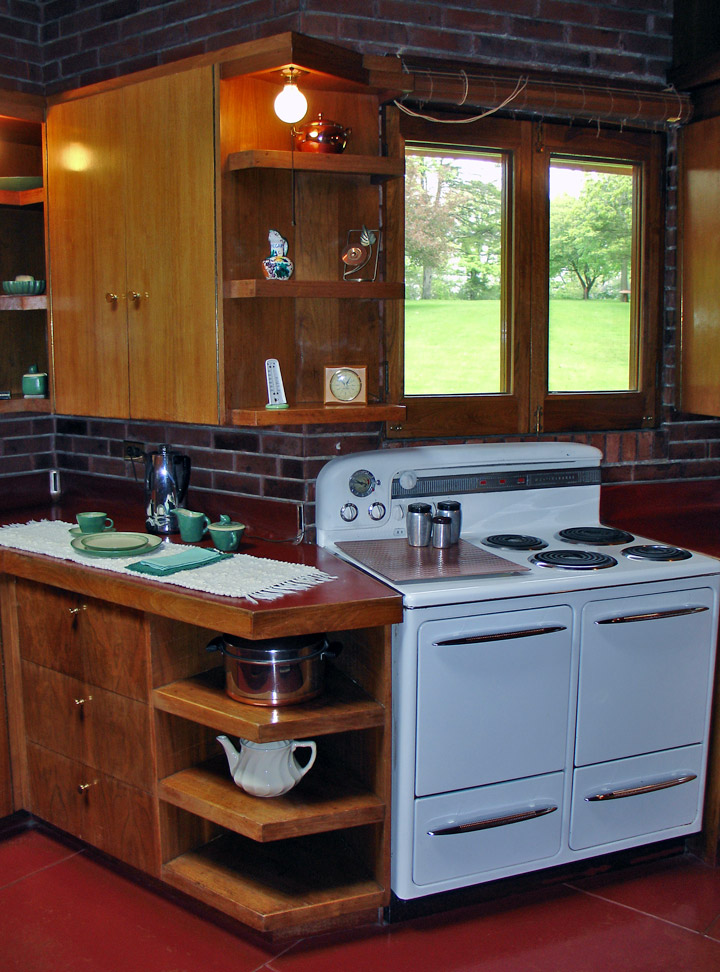 The Walters were justifiably proud of Cedar Rock Very little has been altered in the house since its construction; the structure and furnishings are in good condition. The Walters have assured preservation of the residence by providing a trust fund for the perpetual maintenance of the property. 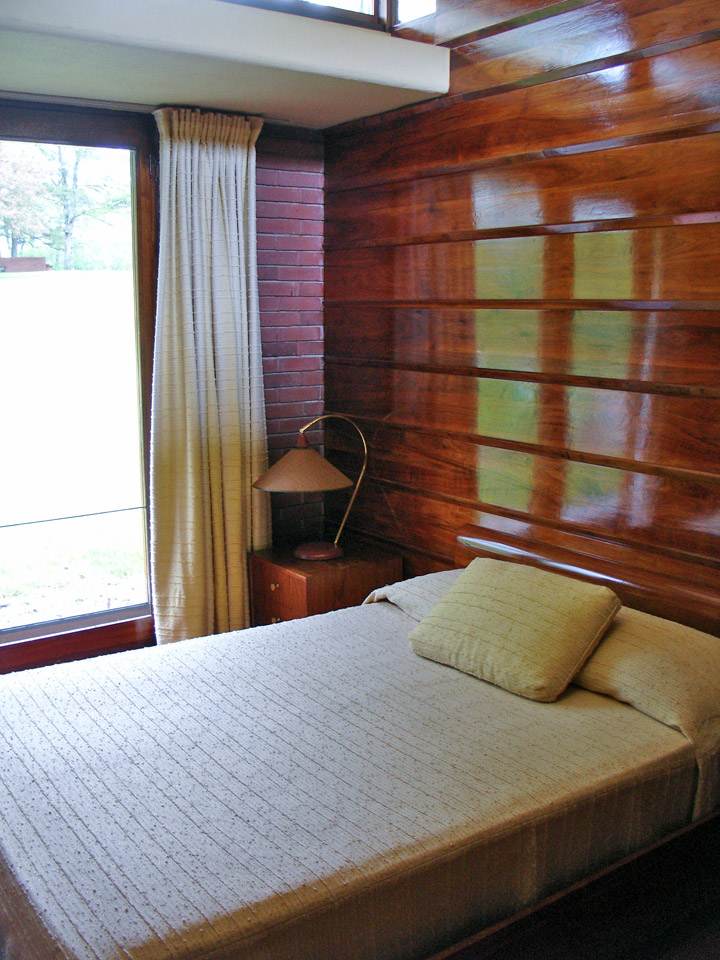 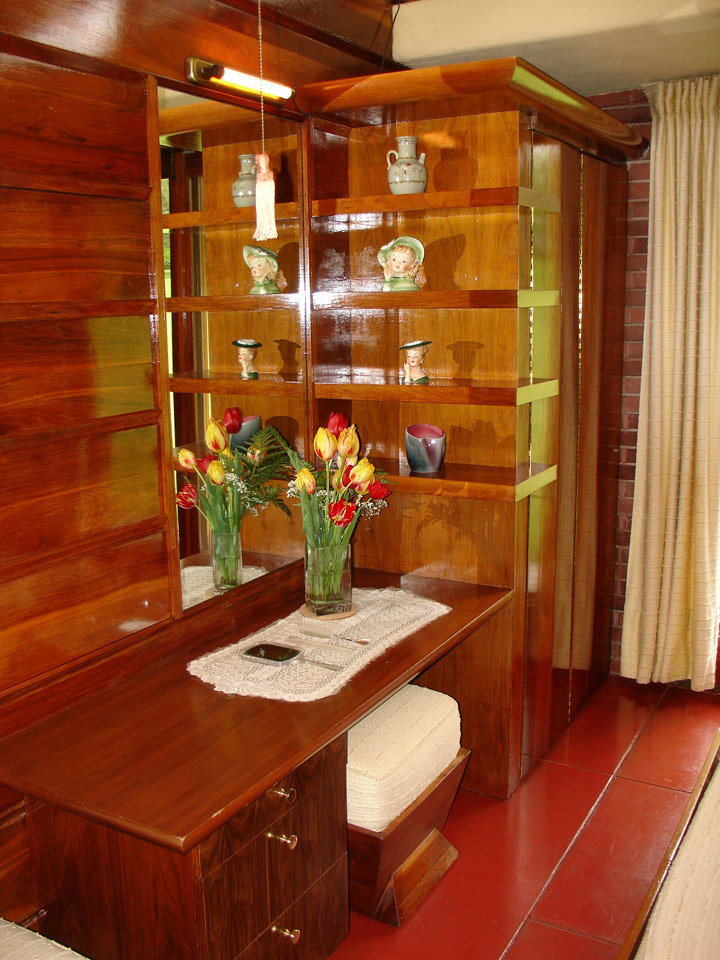 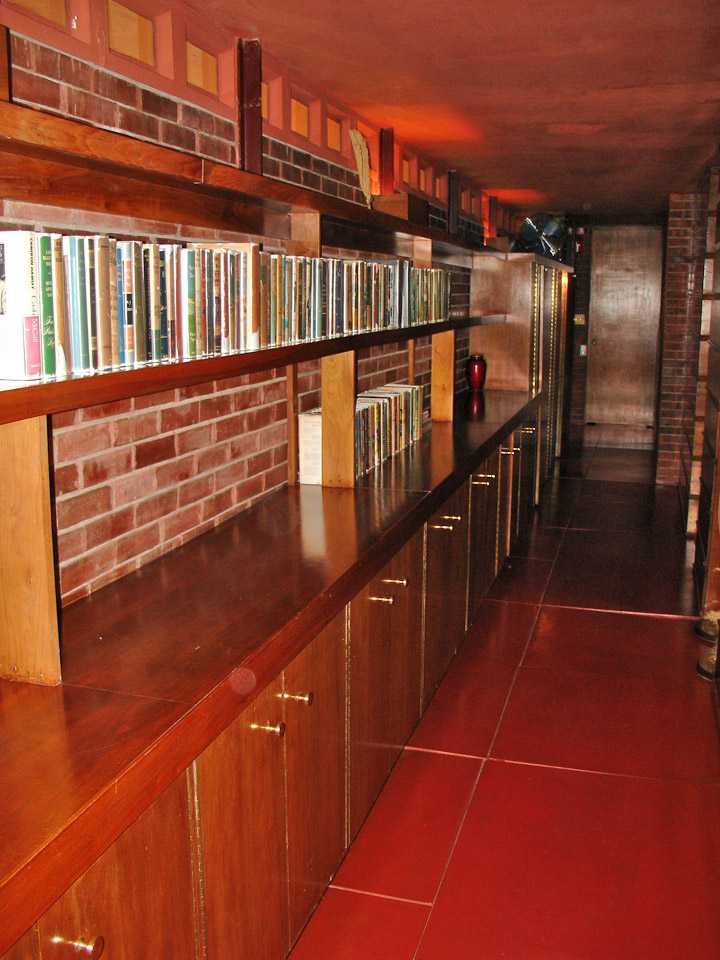 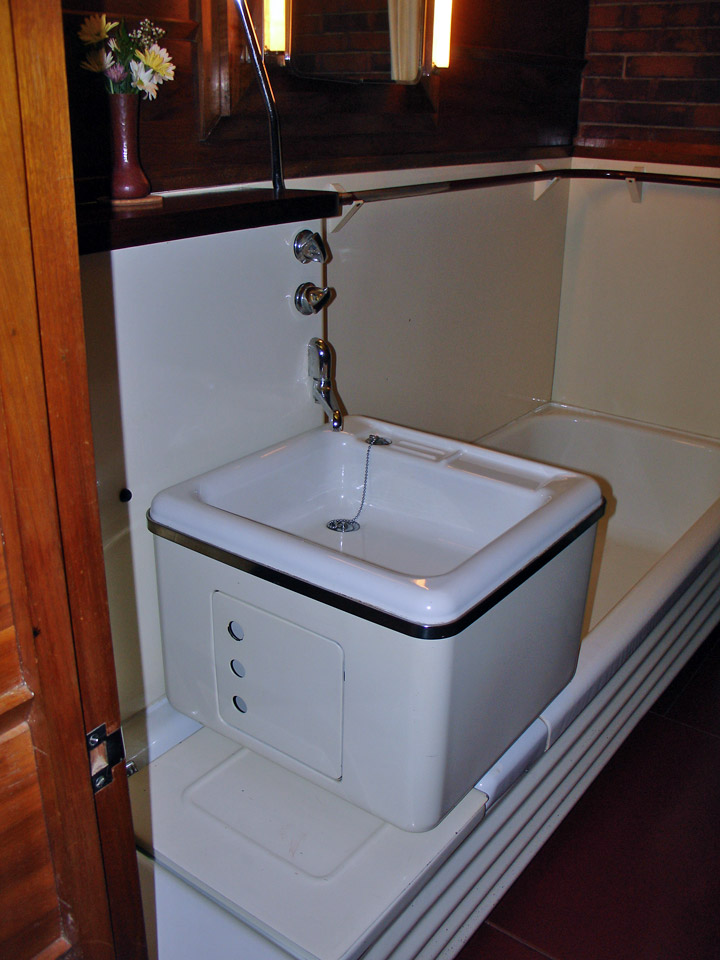 movable lavatory over the toilet next to the bath tub 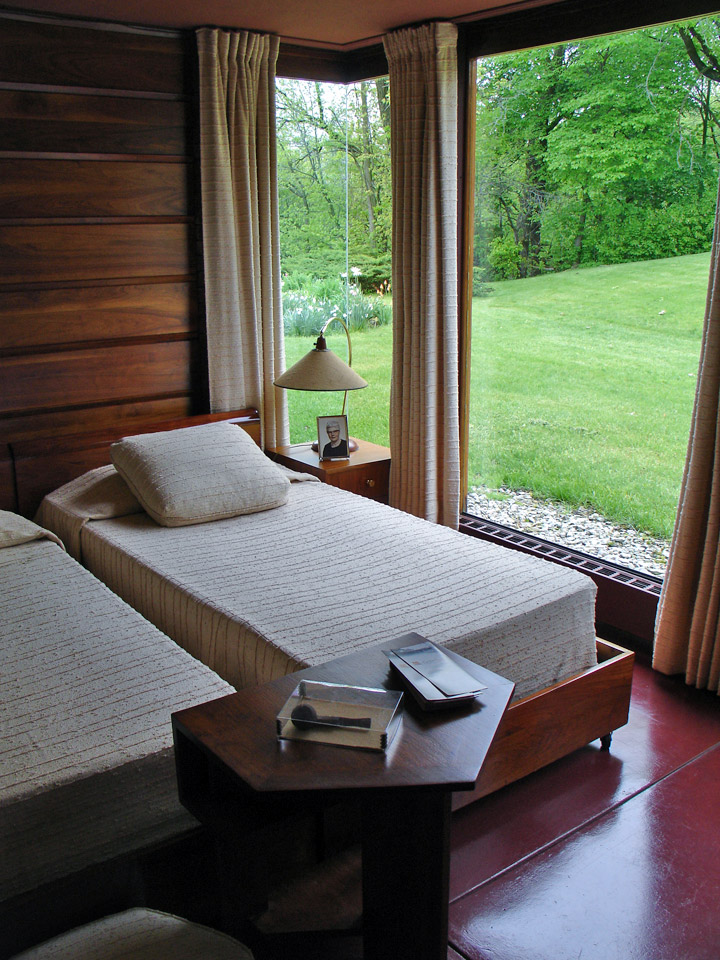 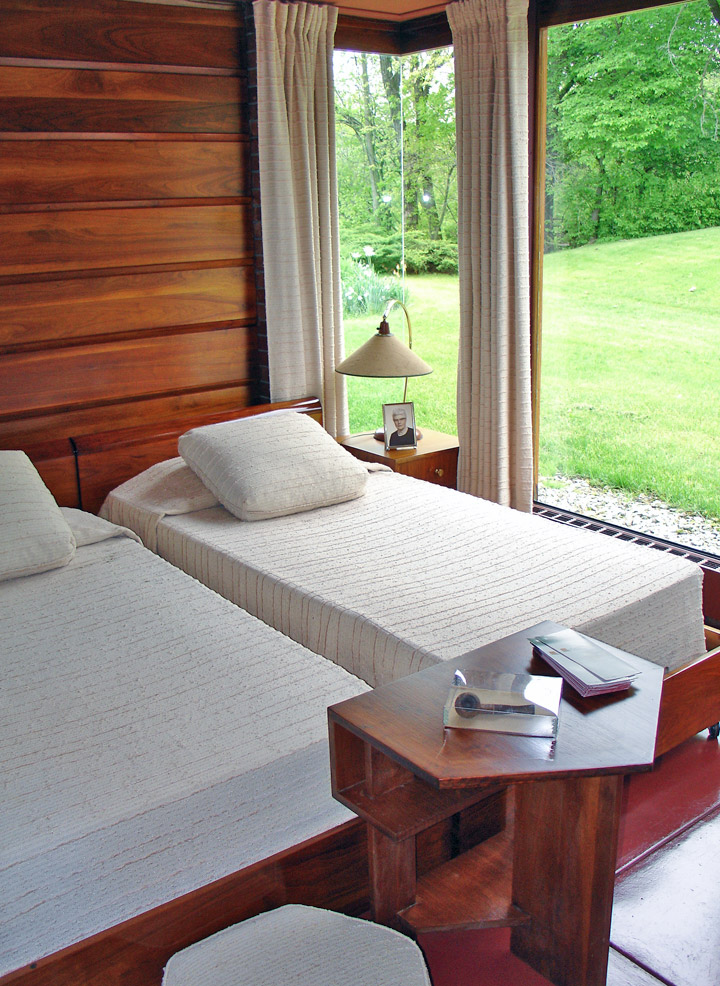 with a view to the landscape 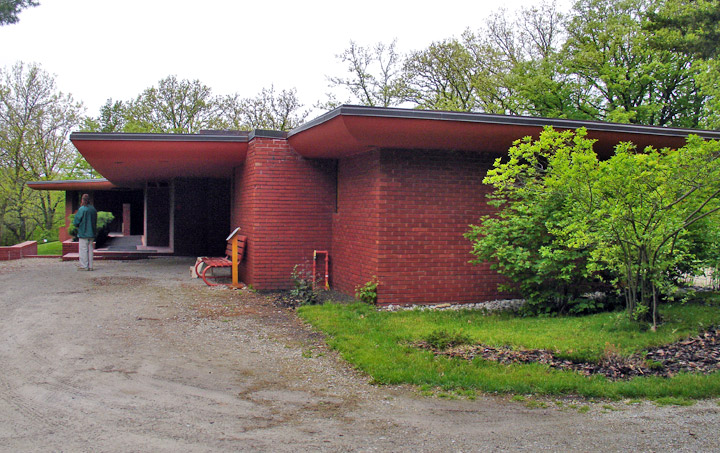 tail of the "tadpole" is a carport and "maid's quarters" 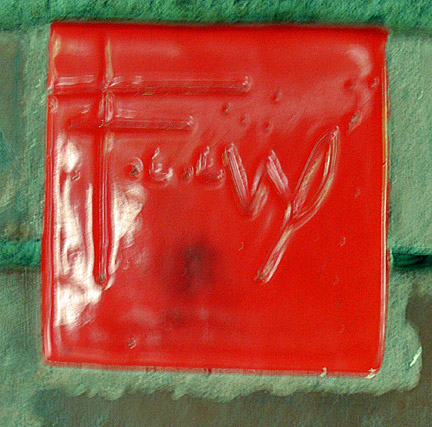 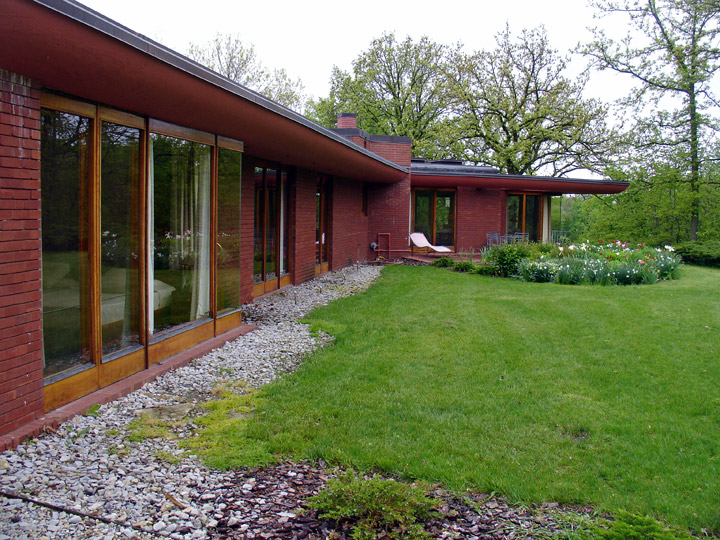 windows along the garden side 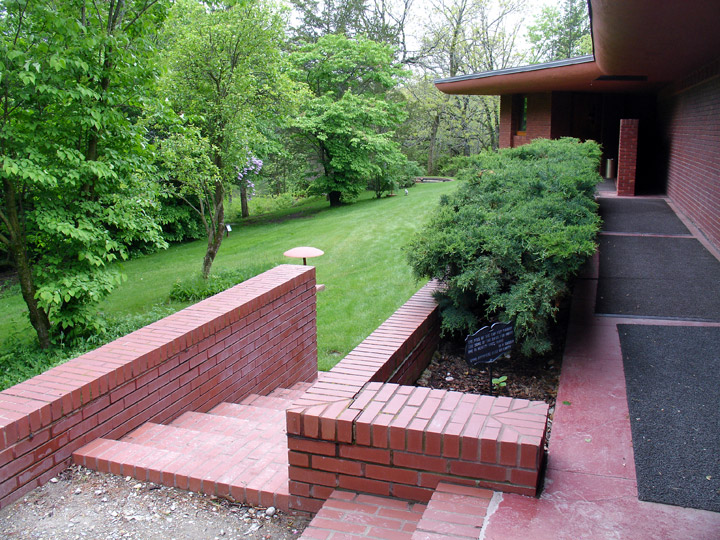 to the entrance along the slope to the lake 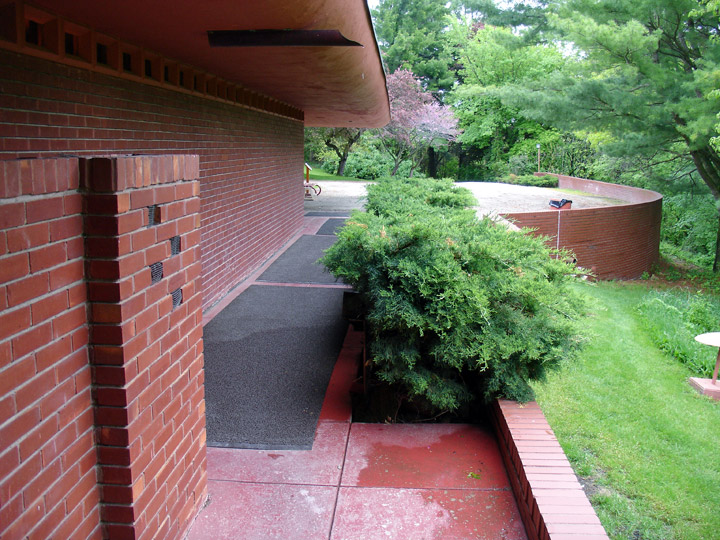 looking back to the carport and parking area 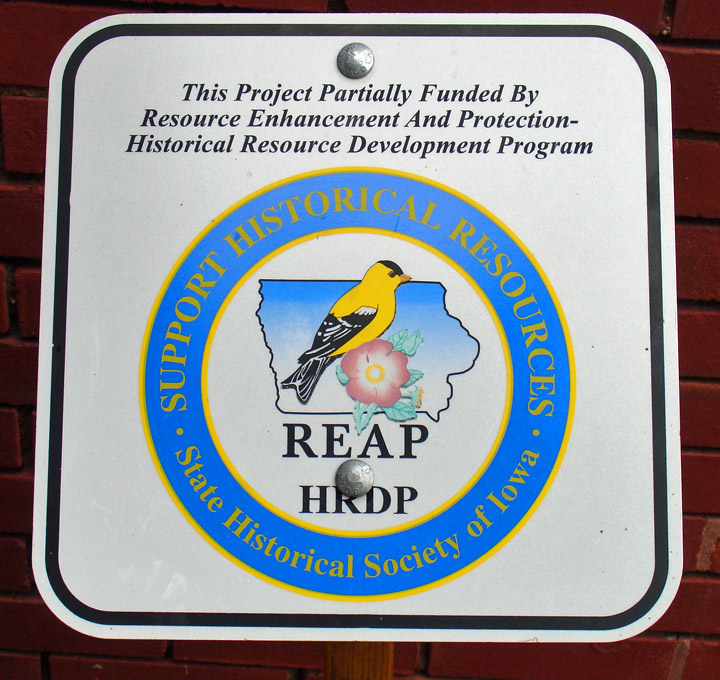 a project of the State of Iowa 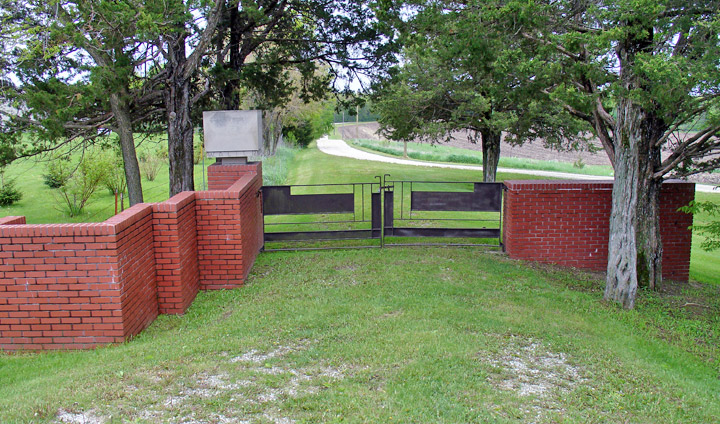 original entrance to the house grounds
designed by Wright