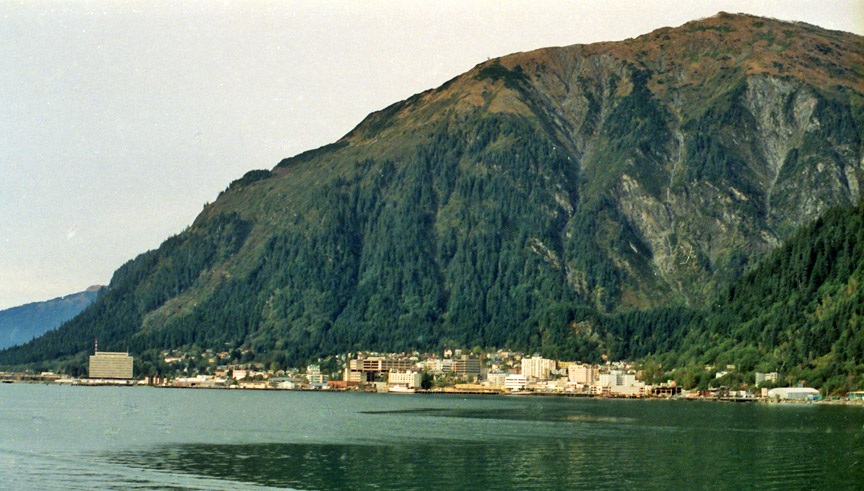 the city between the sea and the mountain 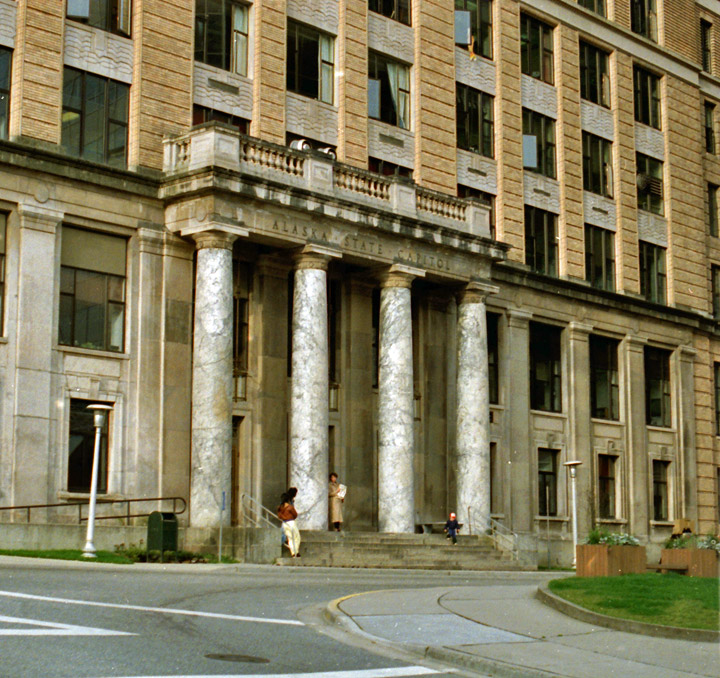 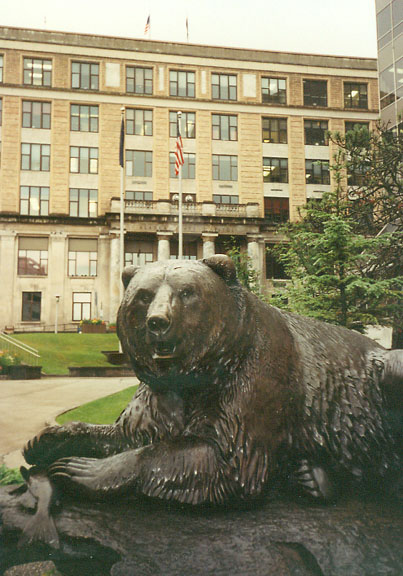 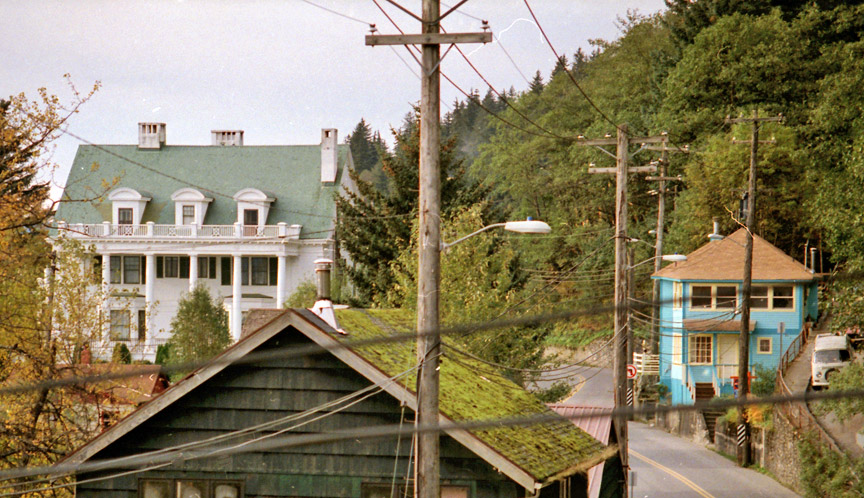 the governor's house in the left background 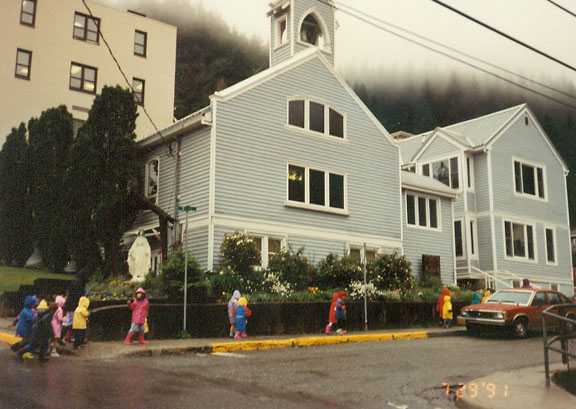 a rainy day in town 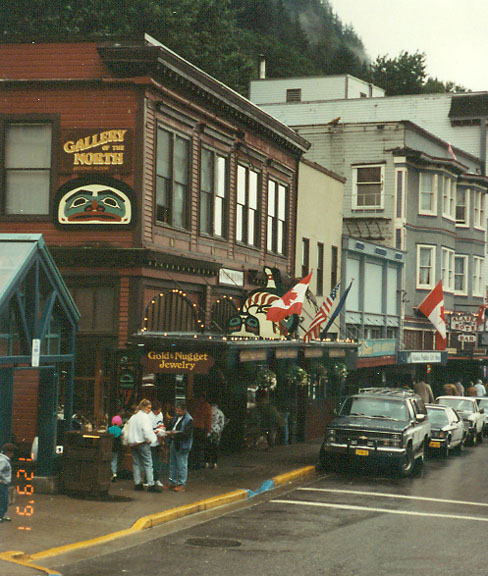 shopping street on a rainy day 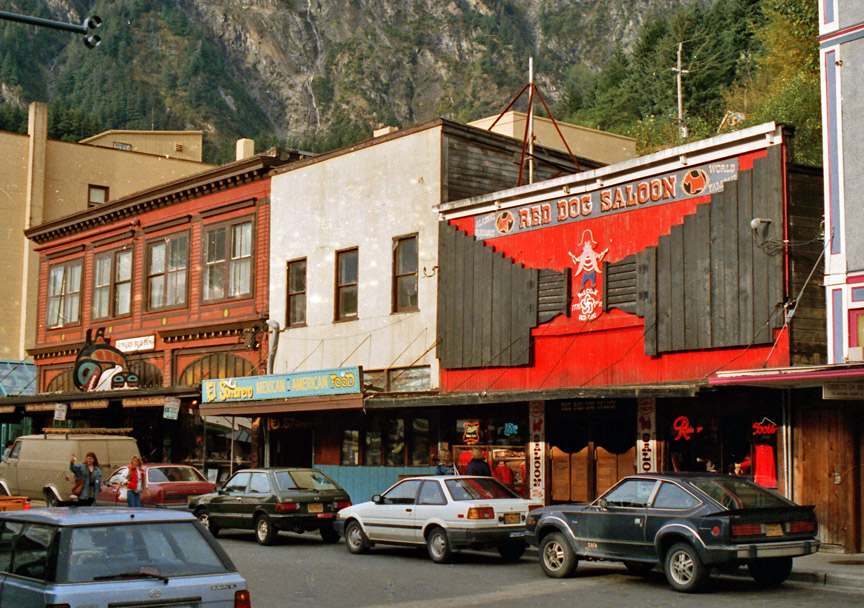 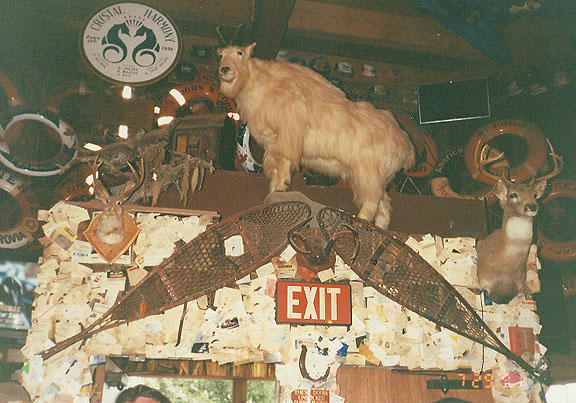 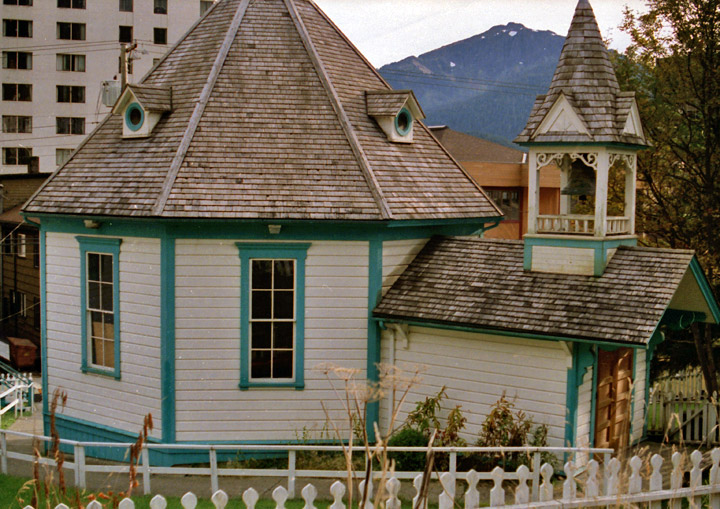 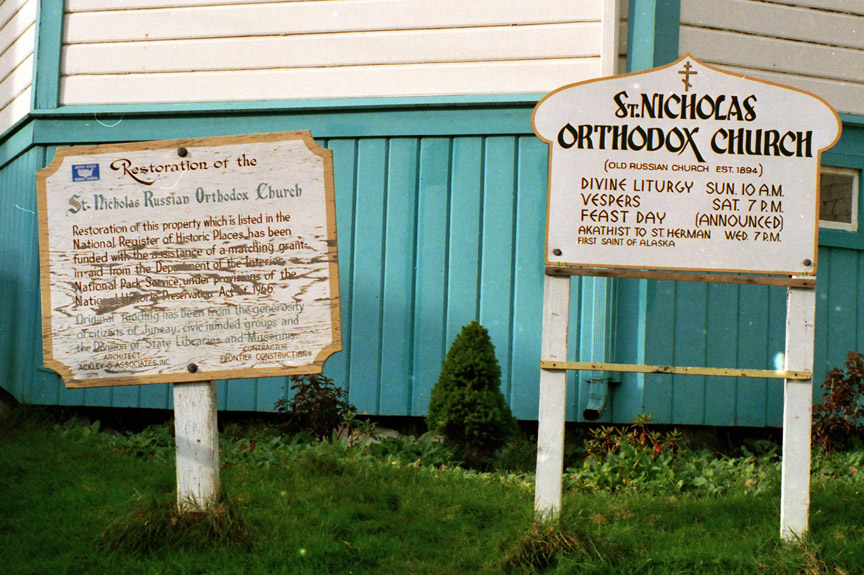 Although this unique octagonal building was constructed with funds donated from Russia, and the six large panels in the front (called the iconostas or icon screen) were painted in Russia, there were no Russians in Juneau, and this has been an Alaska Native, mostly Tlingit Indian, parish since its founding in 1893.

Sitka was the capital of Russian Amer­ica, and there were two churches: the Cathedral where Russians, Siberians and Aleuts worshipped, and a Tlingit church near the native village. The city of Juneau did not exist during the Russian era, which ended in 1867.   Most of Alaska’s 87 Ortho­dox churches were founded by Aleuts or Aleut missionaries, but no Aleut or Rus­sian missionaries came to Juneau

It was the Tlingit Chiefs in the Juneau area who took the initiative, inviting the Orthodox bishop in Sitka to visit, instruct and baptize them about a hundred years ago. After Juneau’s founding as a Gold Rush town, American missionaries intro­duced Protestant Christianity in the region, but, following government policies of the time, refused to allow the use of Tlingit language in the services or schools. Since the Indians were still the great majority of the population, they saw no reason to adopt the new, “foreign” language and customs of the newcomers, and asked to be received into the Eastern Orthodox

Church, knowing this religion had been using the Tlingit language for fifty years or longer at Sitka.

The Iconostas, together with a few Icons on the walls, tell this story: 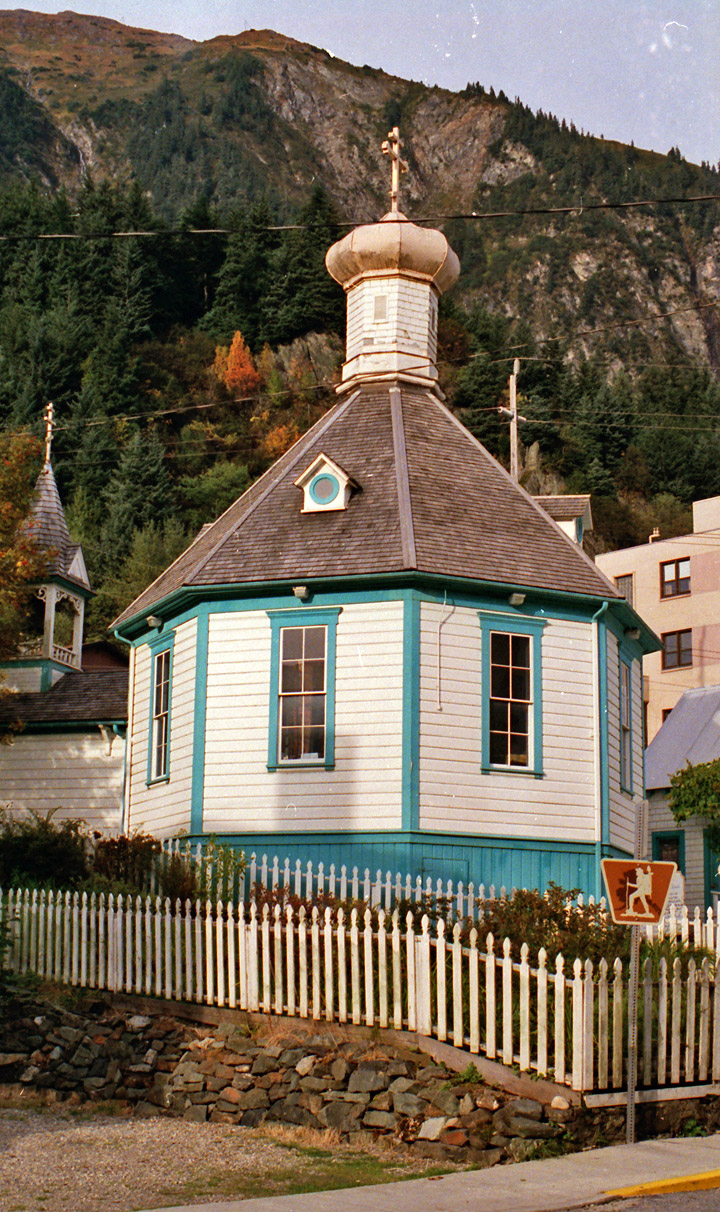 This Church was named for St. Nicholas of Myra in Lycia, a city in what is now western Turkey. While considering being baptized, several Tlingit chiefs had a dream in which a short, bald, white-bearded man appeared to them and told them to go to Sitka and be instructed. When they met the Orthodox Bishop there, they also saw in the church an icon of St. Nicholas, a fourth century bishop, whom they all recognized as the man in their dream, and this church was named for him. His Icon is on the far right side of the icon screen.een.

There is a modern Icon, painted in the ancient style, of St. Nicholas, written in Slavonic, English and Tlingit on the right side of the church, under the lamp. There are about 75 Orthodox families in the Juneau area, most of them Tlingit. Services in this church, held about four times a week, are now conducted primarily in English, with some Tlingit, Eskimo and Slavonic, as befits the history of this community. 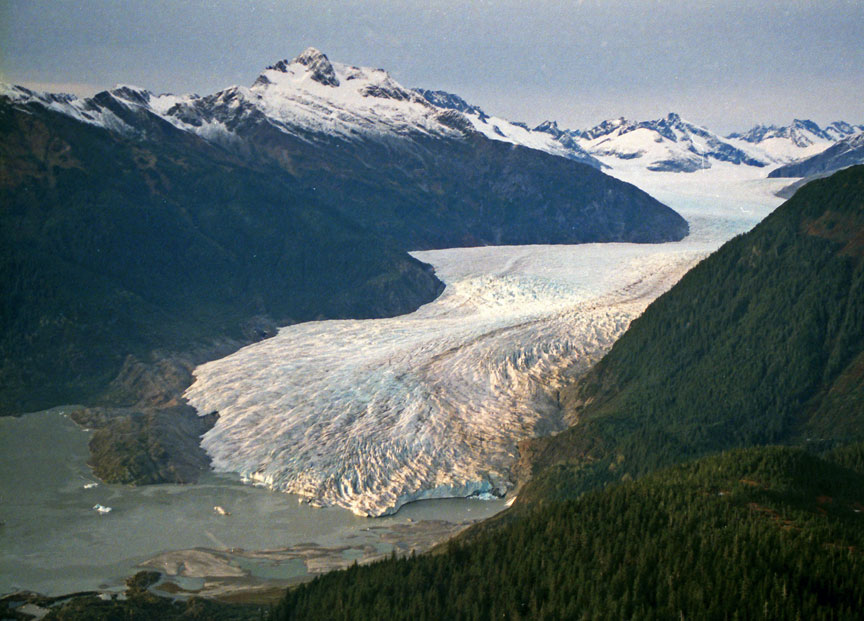 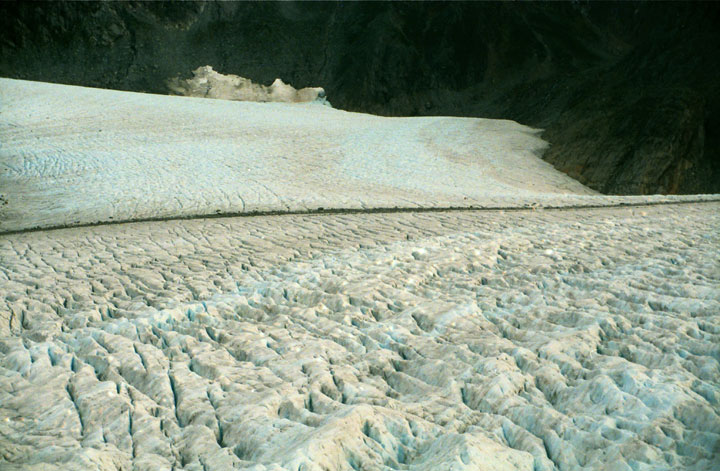 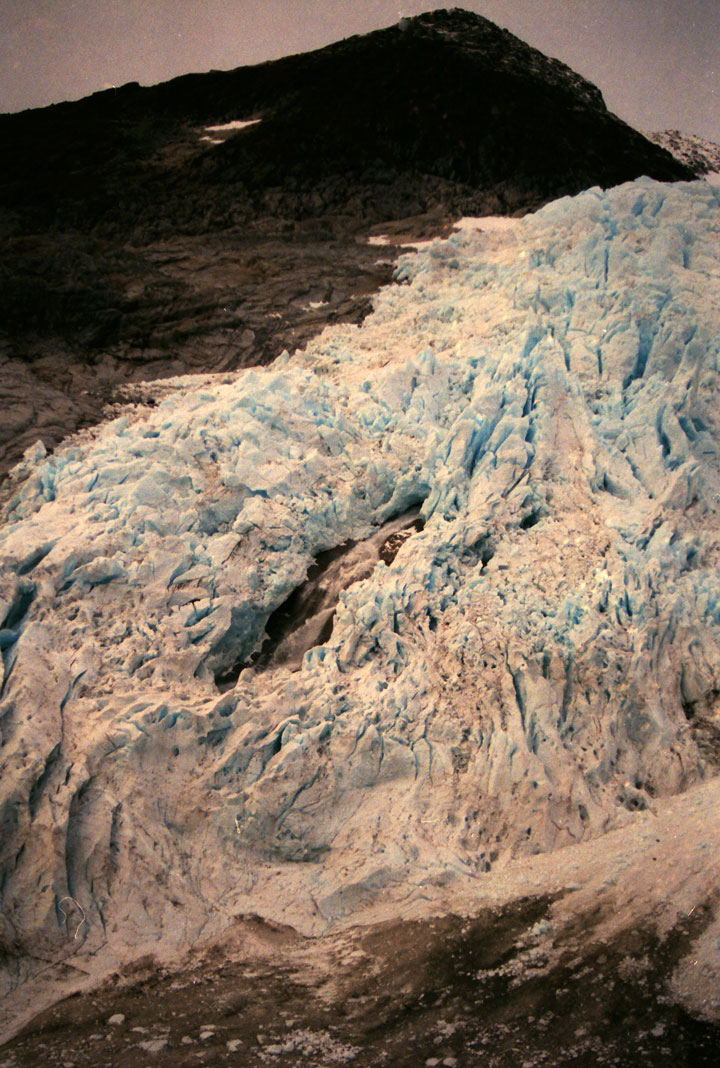 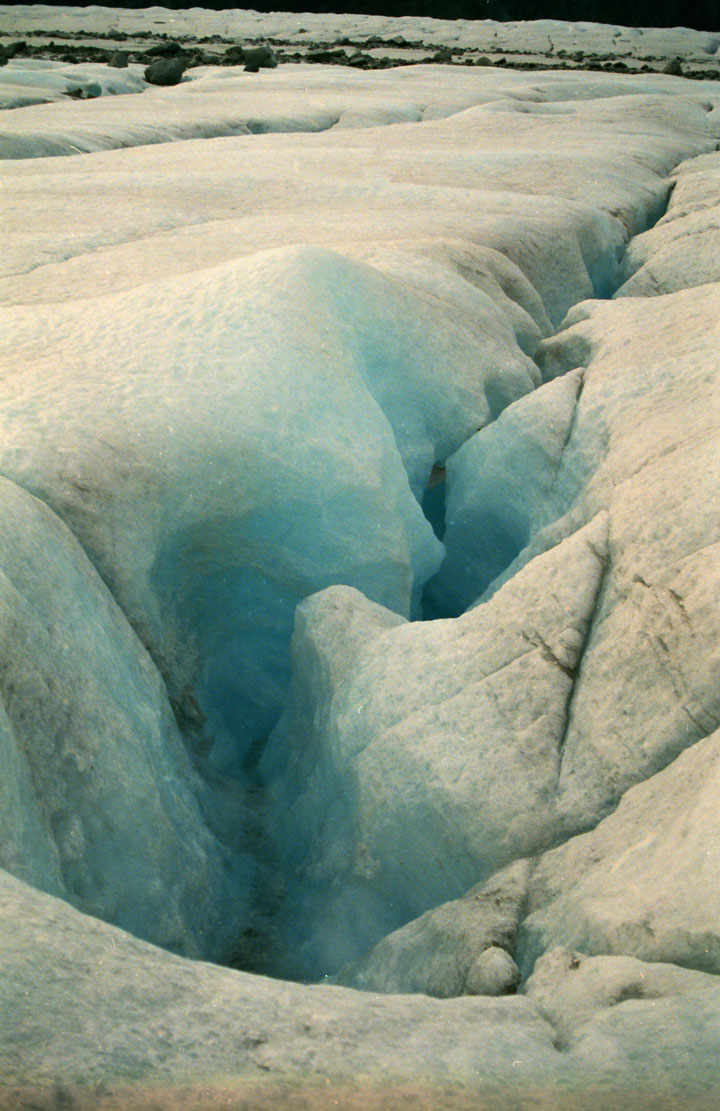 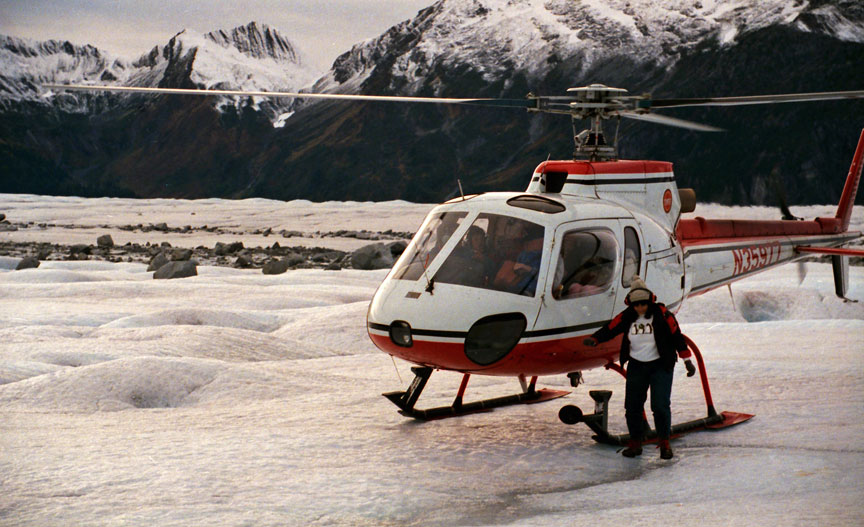 More Photos of the Mendenhall Glacier

Other Glaciers of Alaska