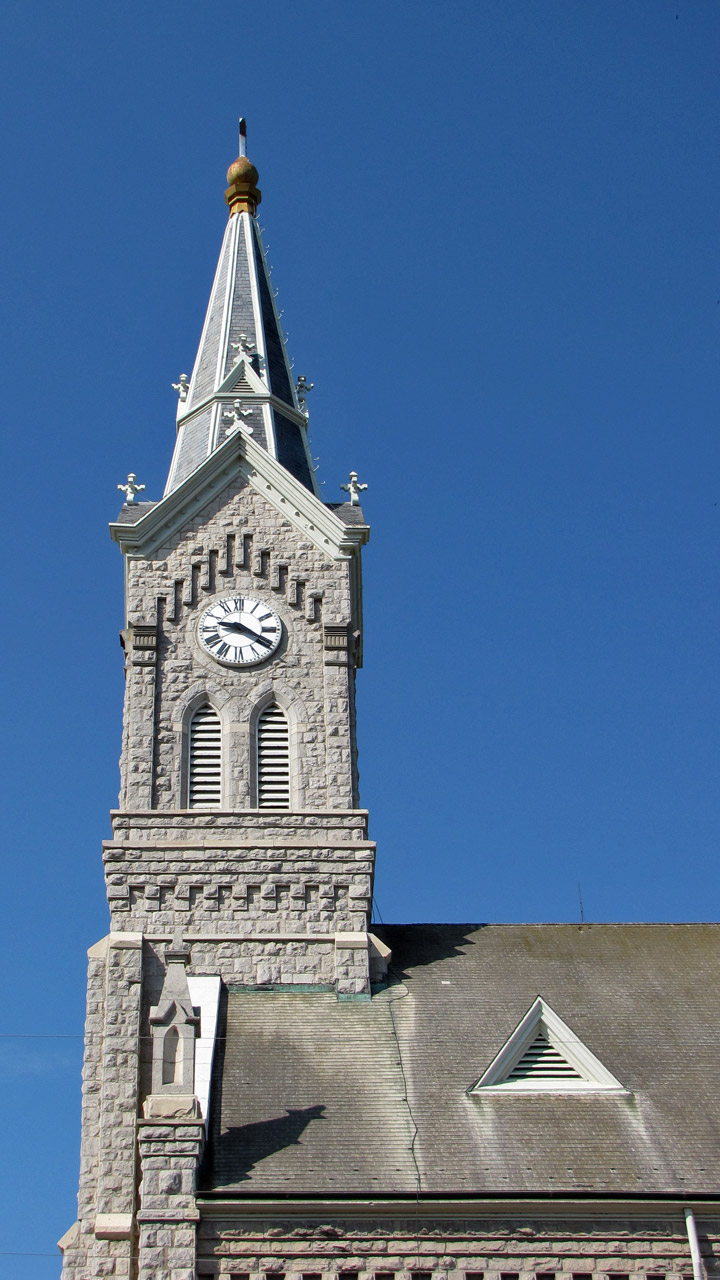 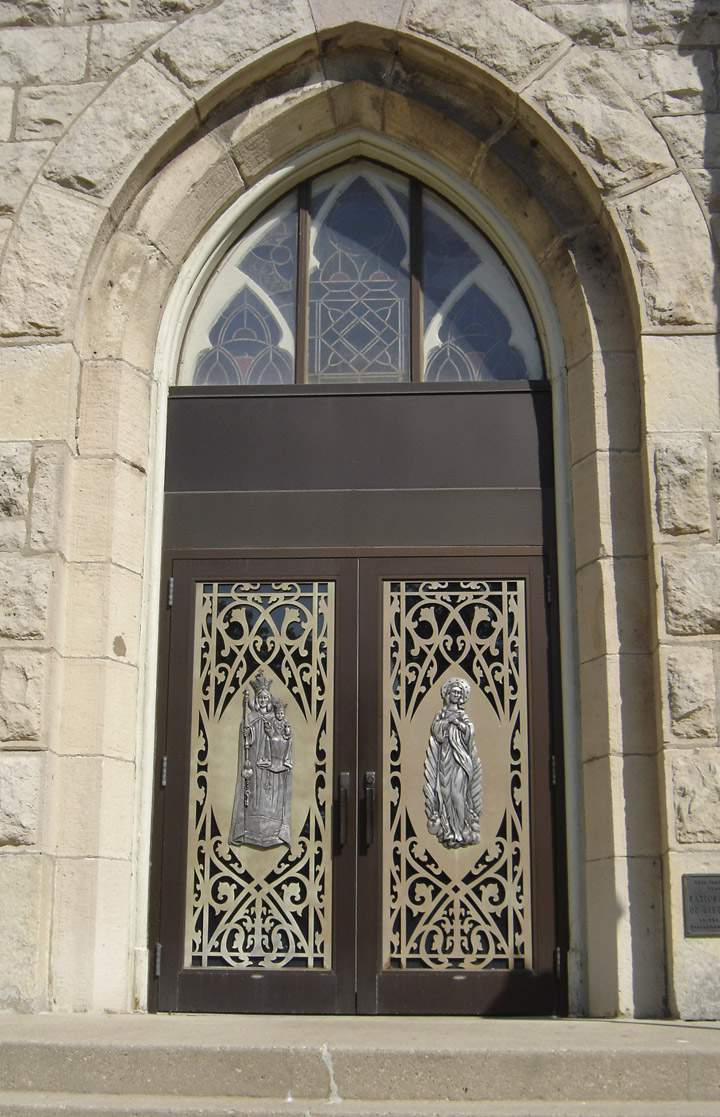 Towering over Port Washington’s downtown is the stately St. Mary’s Church, a neo-gothic structure built in 1882. The church was built by numerous Luxembourg immigrants and their first generations descendants under the direction of their pastor, Fr. Henry Willmes, an immigrant from Reichlingen, Luxembourg. Yet the history of St. Mary’s Parish dates back 35 years earlier. 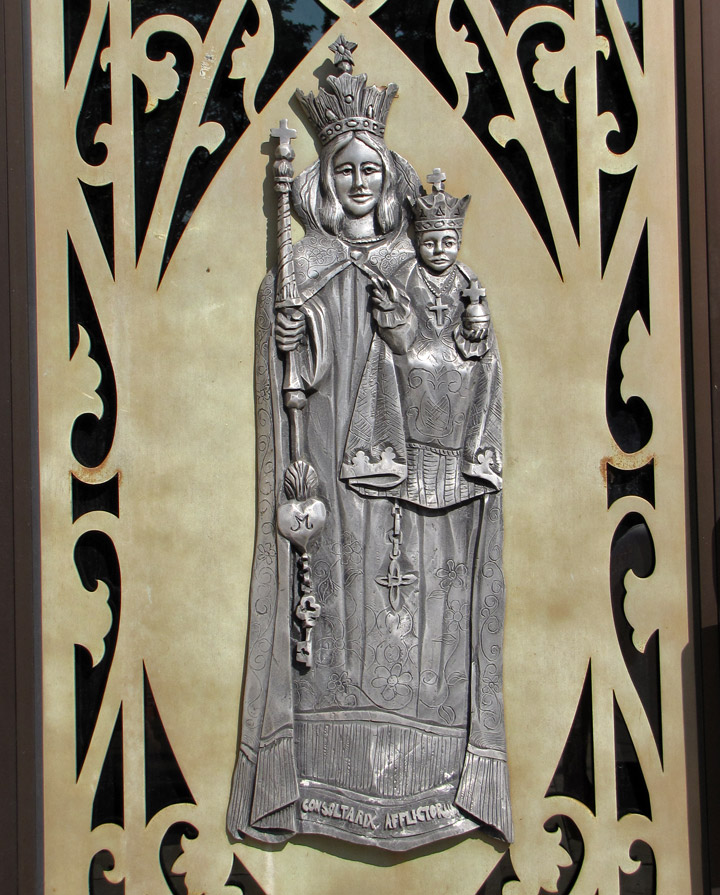 Our Lady of Luxembourg, Consoler of the Afflicted sculpted in bronze.

In 1847, three Catholic families who had immigrated to Port Washington one year earlier from Luxembourg, celebrated Mass at the home of the Gengler family on Pier Street. This first group of Luxembourger Catholics included the families of John and Franz Gengler, Adam Even, and John Warling.

Two years later, the growing congregation purchased land atop what is known today as “St. Mary’s Hill”. It was there that they built their first church – a small frame house of worship. Yet it wasn’t until 1853 that the congregation received their first resident pastor and organized into a parish. The parish was name St. Mary of the Assumption with its “kirmes” date of August 15th. 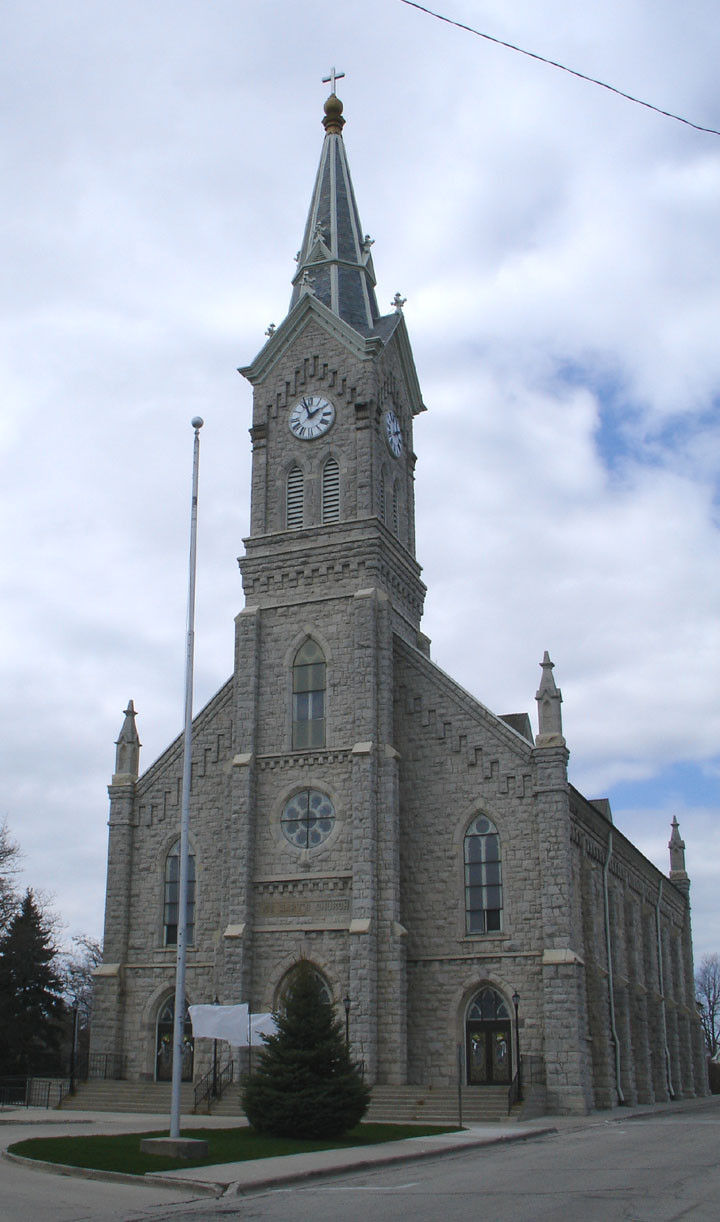 A large group of Luxembourg immigrants and some Germans settled in Port Washington in ensuing years and the parish rapidly grew. In 1860 a small Irish parish in Port Washington, St. Stephen’s, was closed and the Irish church members reluctantly were forced to join St. Mary’s. At that time, the two congregations developed the parish’s first cemetery, now referred to as “old” St. Mary’s Cemetery. In the early years of this cemetery, the Irish were buried on one side of the cemetery and the Luxembourgers on the other. 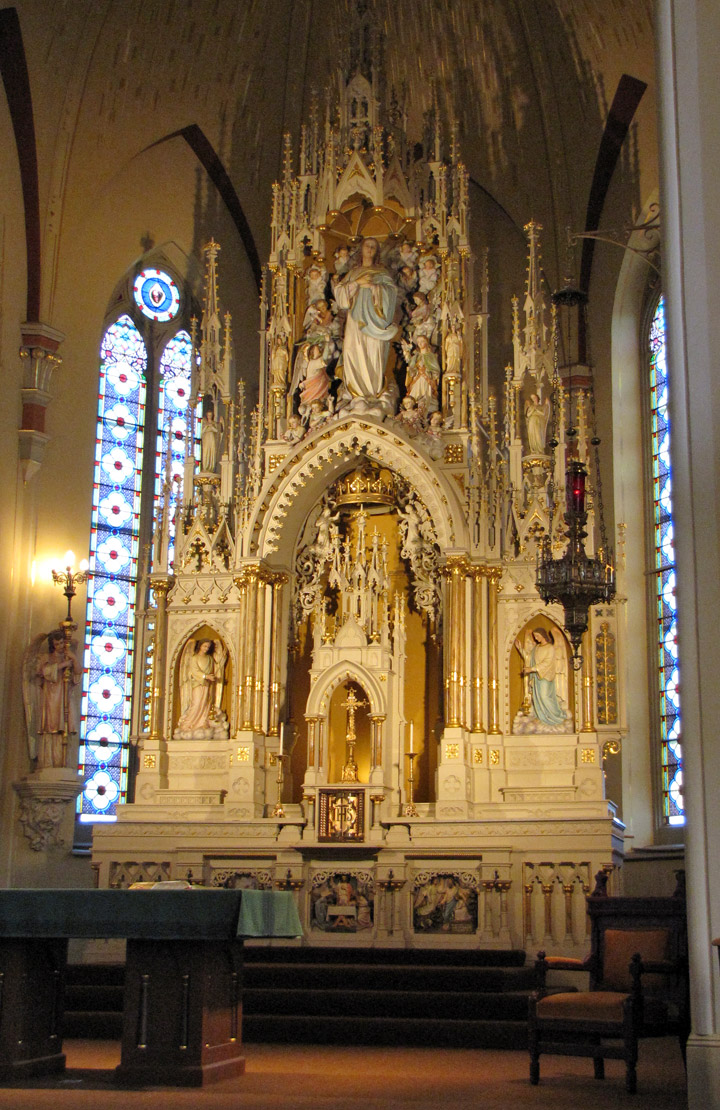 In 1860, the parish built a new, stone church in the architecture style of their homeland in Luxembourg. This church was located on the site of the current church parking lot. This church served the parish until the present 1882 church was built and in the years following was used as a hall for parish activities until it was demolished for the current school in 1916. St. Mary’s School was constructed under the leadership of another Luxembourger immigrant pastor, Msgr. Peter Holfeltz originally from Remerschen, Luxembourg. 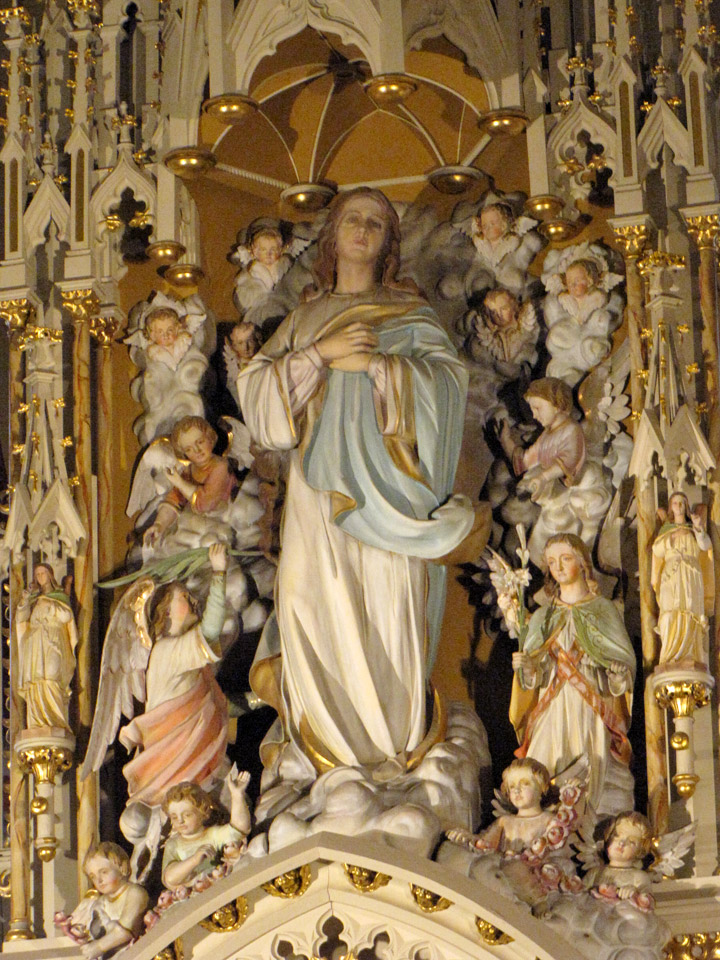 By the late 1870s it was obvious to the congregation that they had outgrown the small stone church. The young pastor, Fr. Henry Willmes who had emigrated from Luxembourg to Wisconsin in 1857, led the charge to build a new, large church that would reflect the strength of the congregation based in Ozaukee’s county seat. 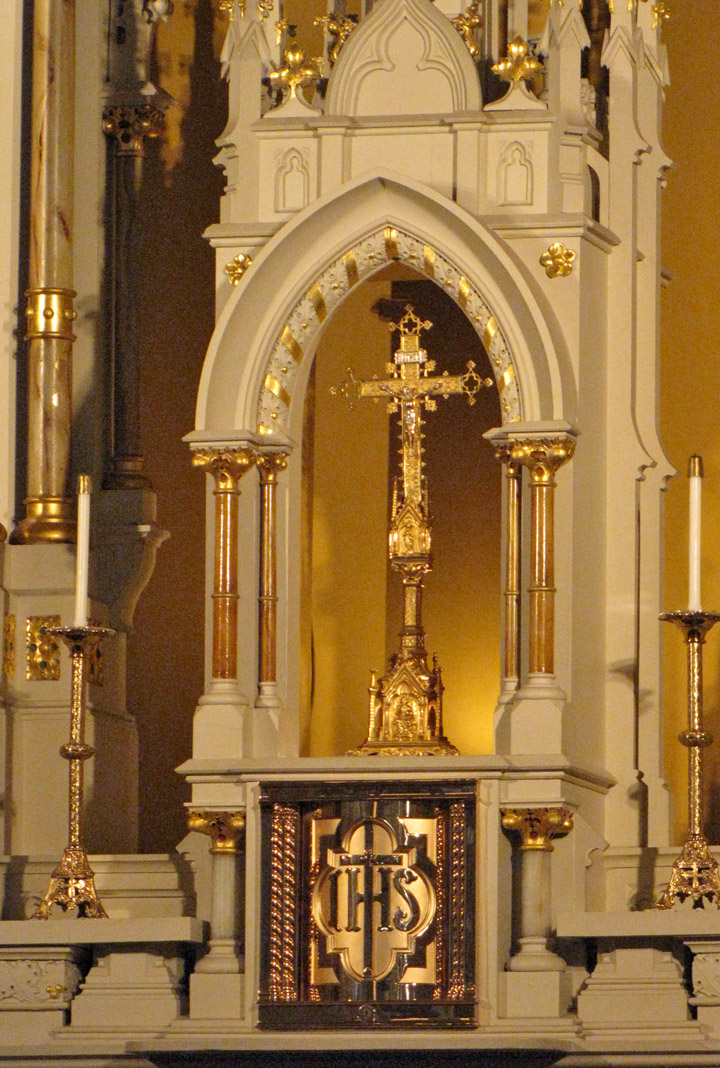 In a last minute decision, Fr. Willmes and the parish purchased lots on the west side of Johnson Street just weeks before construction began. This decision to locate the church atop Franklin Street forever changed the landscape of Port Washington and its picturesque downtown. 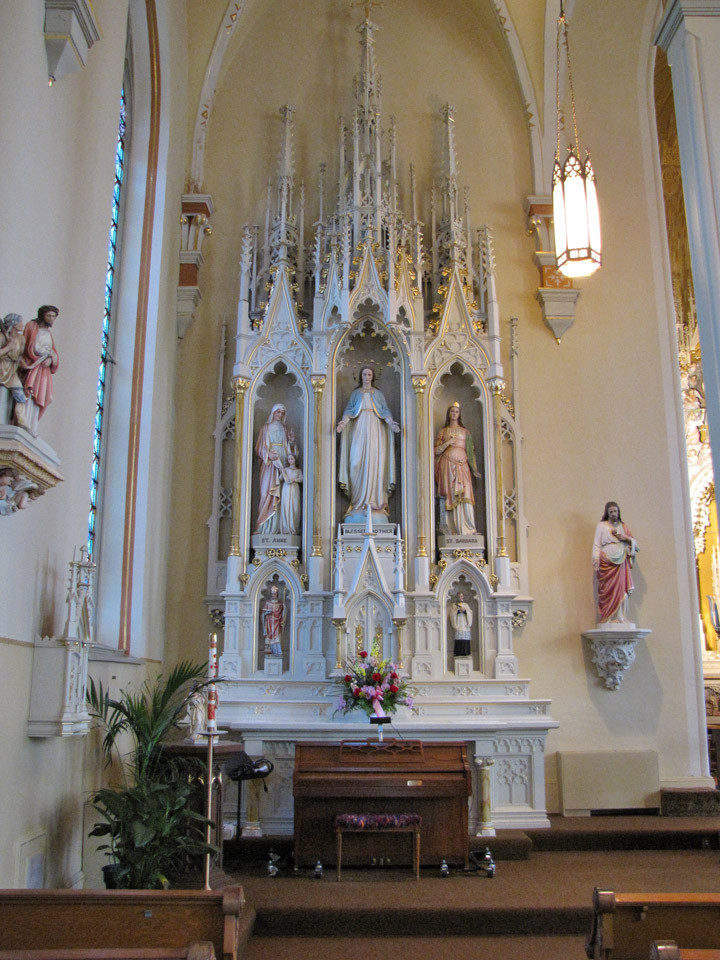 Construction began in 1882 with the stone for the new church cut from the Druecker Stone Quarry just three miles north of construction site. The Drueckers were also immigrants from Luxembourg. After two years of construction, the church was dedicated in October 1884. It measured 160 ft x 66 ft, totaled 10,560 square feet, and was built for $70,000. 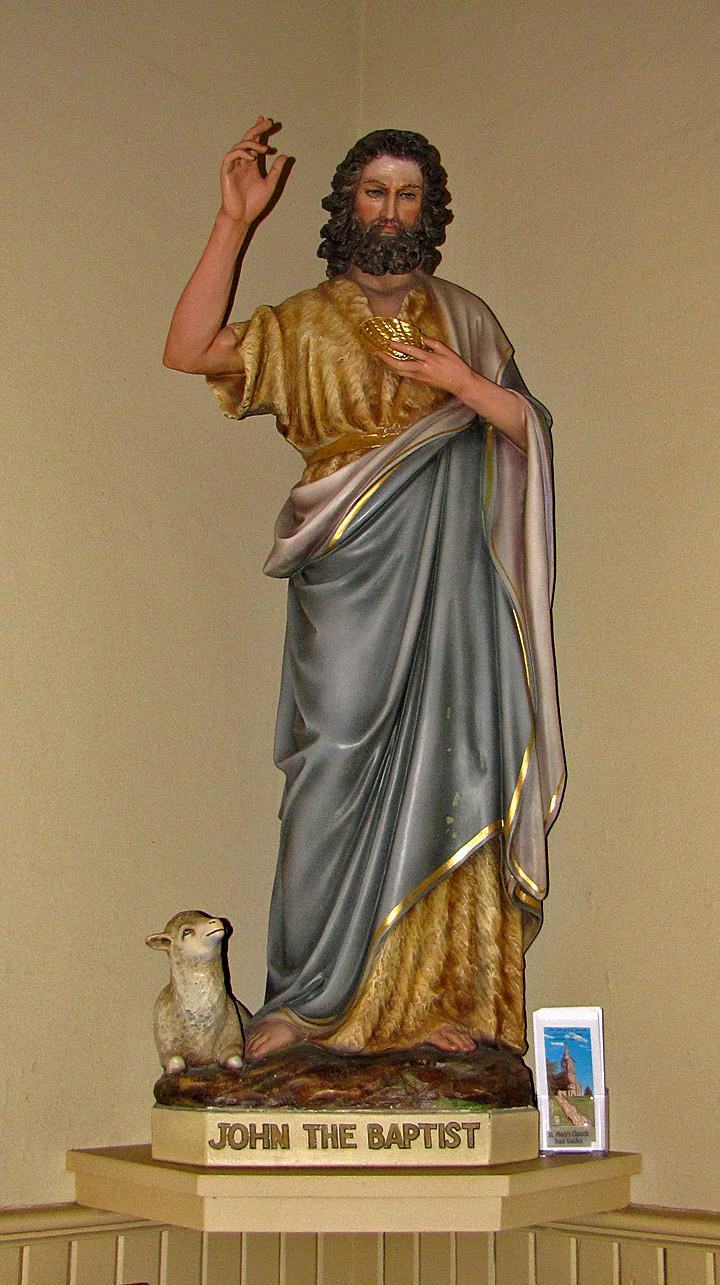 Though it has experienced some remodeling and repainting over the years, it remains relatively intact. The lovely side altars are original while the impressive high altar was added in 1912. The high altar depictions Murillo’s Assumption of Mary and features statuary of Mary being assumed into heaven surrounded by 25 angels. Four painted murals in the sanctuary depict Marian scenes. The church’s stained glass is original and was donated by various families and organizations from the parish. 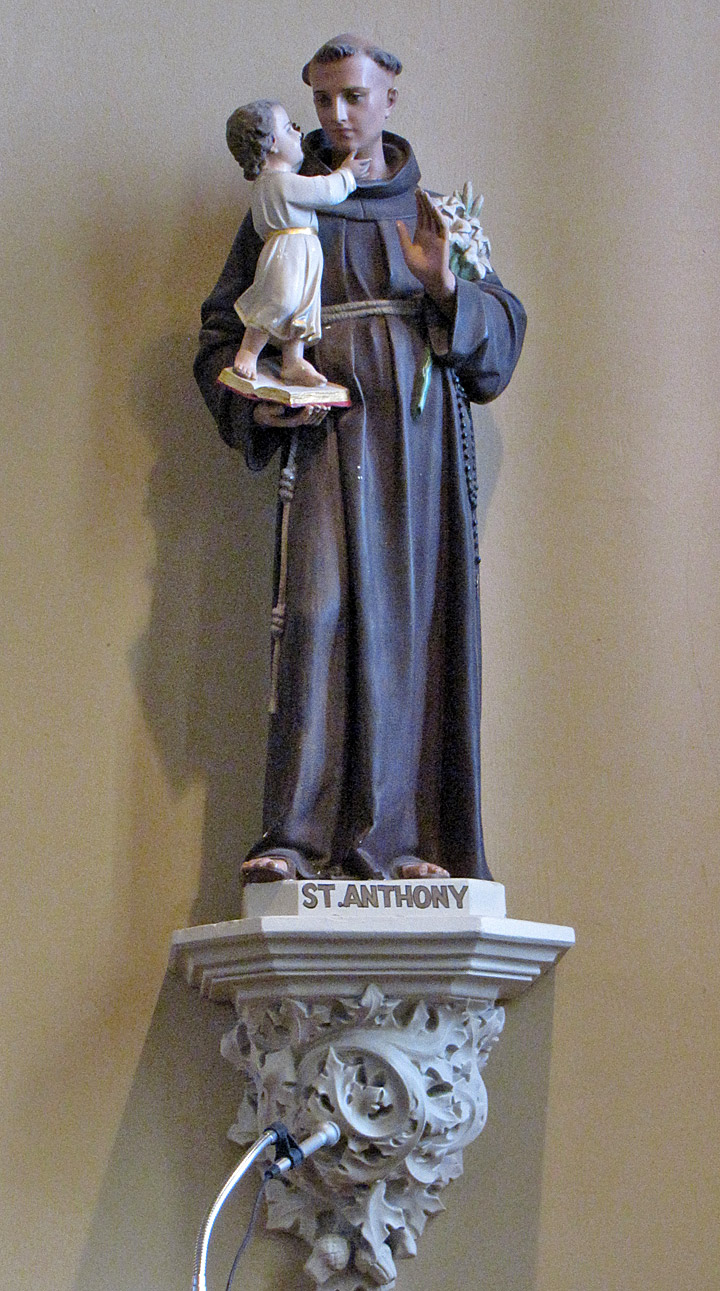 Two hints of the parish’s Luxembourg heritage are present in the church. As you approach the front, outside, center doors of the church take note of the door on your left. It features the image of Our Lady of Luxembourg, Consoler of the Afflicted sculpted in bronze. This door and the other entrance doors were added in 1990. 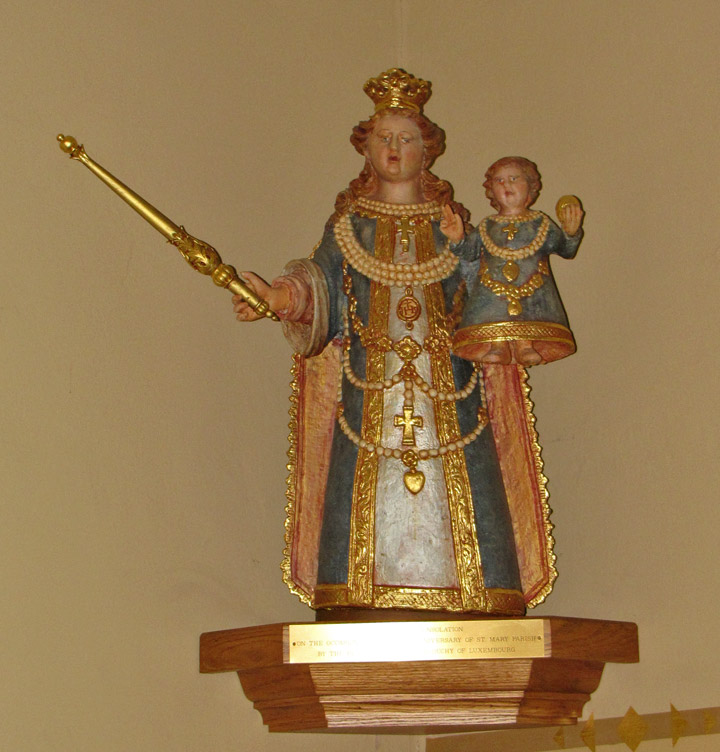 Our Lady of Luxembourg, Consoler of the Afflicted

Inside St. Mary’s Church, under the choir loft on the west side of the building, is a statue of Our Lady of Luxembourg, Consoler of the Afflicted. The statue was a gift to St. Mary’s Parish for its 150th anniversary in 2003. The statue is a reminder of the parish’s Luxembourgian roots and the faith and devotion of its Luxembourg immigrant founders. 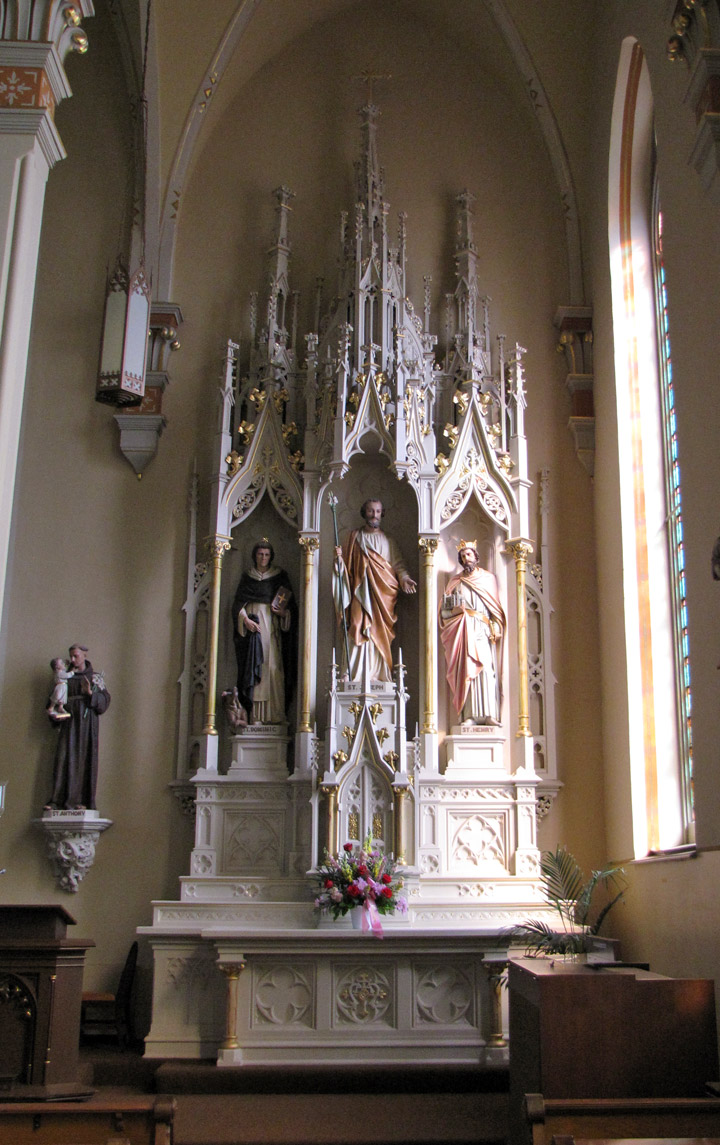 When visiting Port Washington, be sure to visit and enjoy historic St. Mary’s Church. It towers atop Franklin Street as a tribute to the sturdy Luxembourgers who founded the parish and their descendants who continue to worship there. 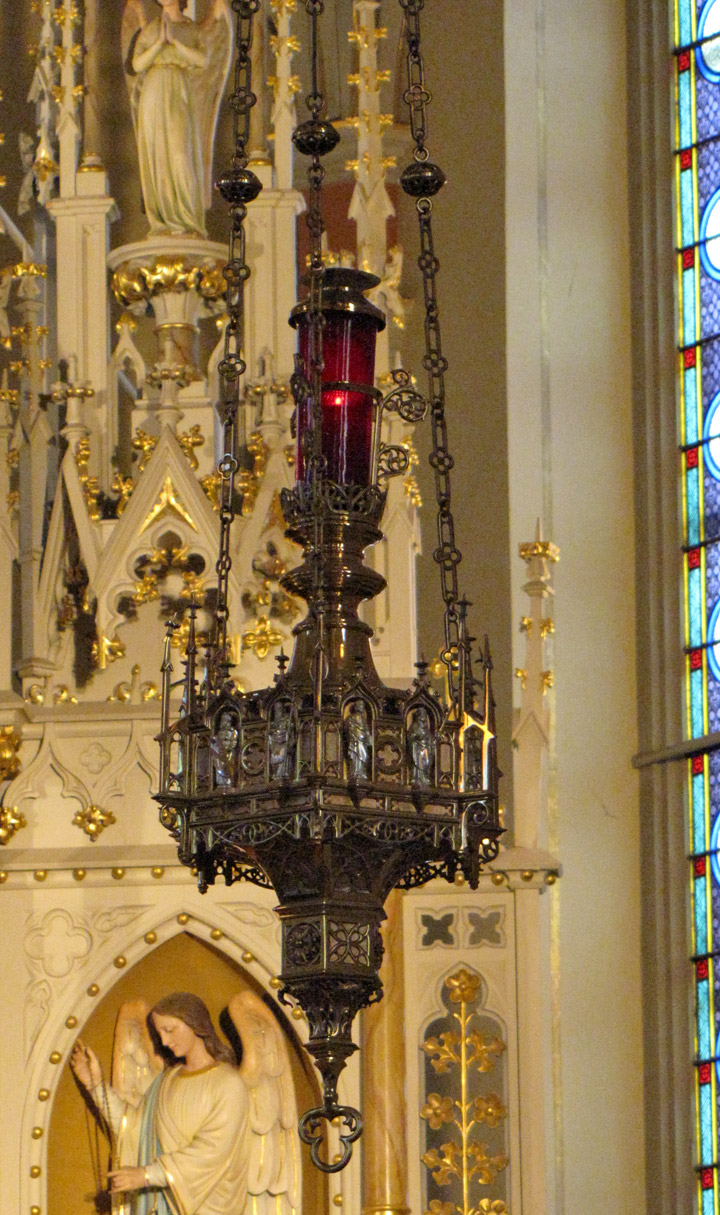 Two final notes of interest: In 1977, St. Mary’s Church was added to the Department of the Interior’s National Register of Historic Places. Second, many visitors think that the only way to reach St. Mary’s Church is by ascending the 85 steps that lead up St. Mary’s Hill. While this is great exercise, please note that it is possible to drive up Franklin Street alongside St. Mary’s Hill to Catalpa Street which leads to a parking lot and easy access to the church. 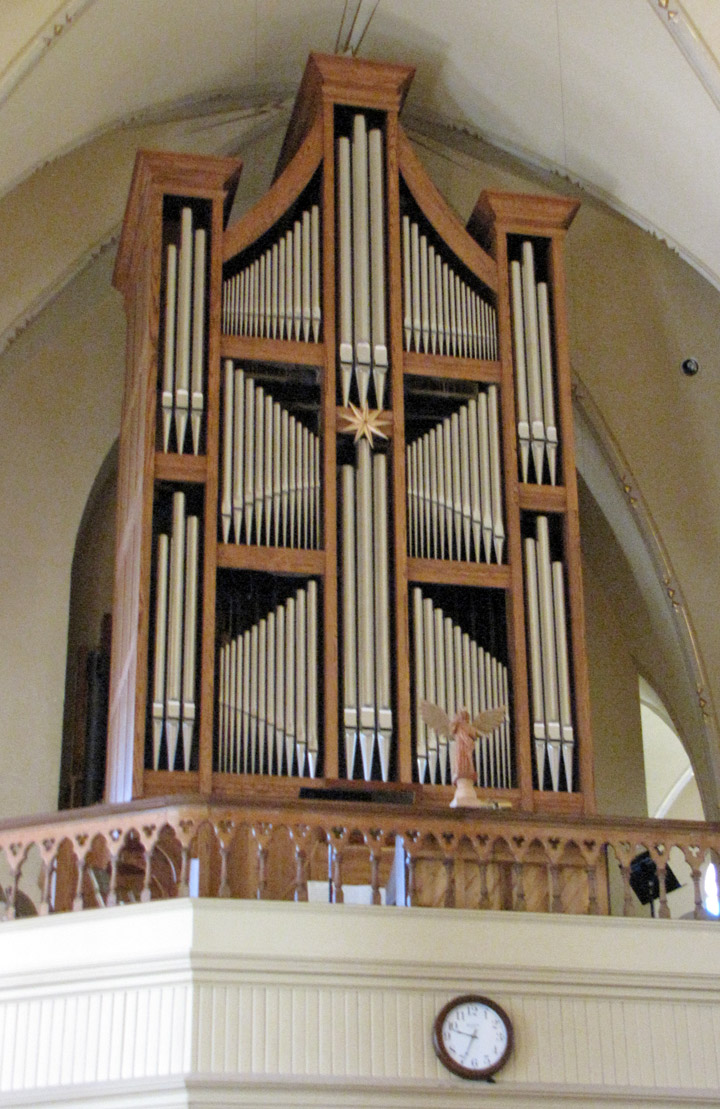