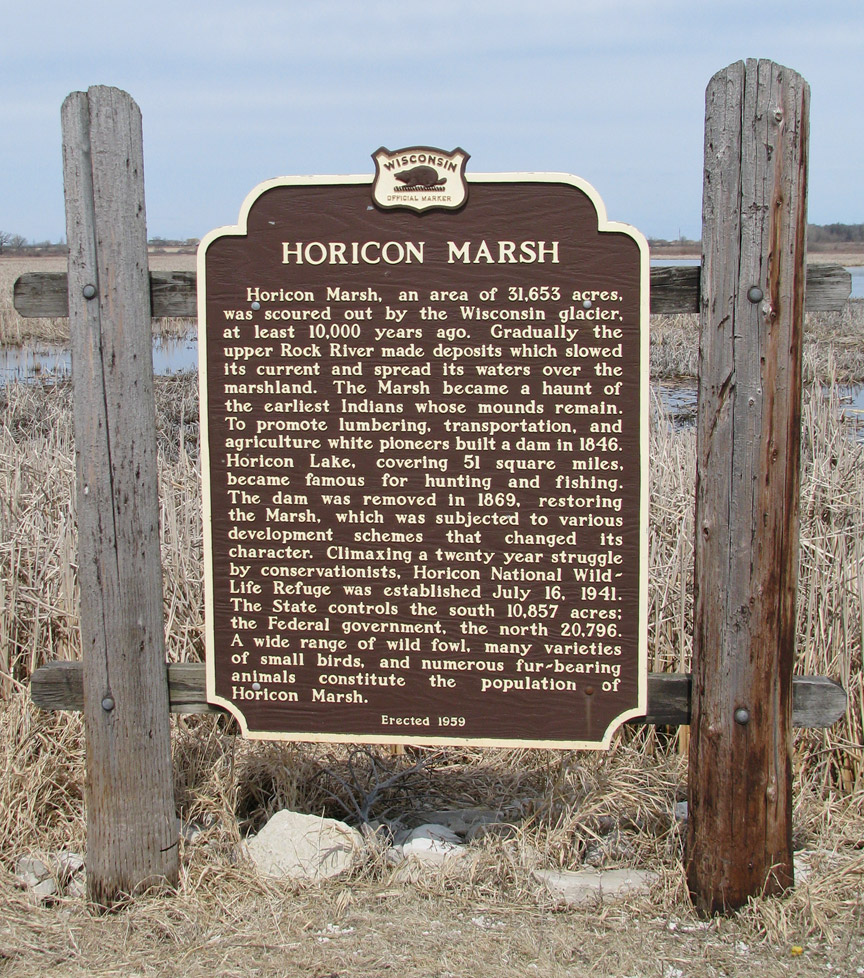 Horicon Marsh is a marsh in Dodge County, Wisconsin. It is the site of both a national and state wildlife refuge. The extinct glacial lake is the largest freshwater cattail marsh in the United States. 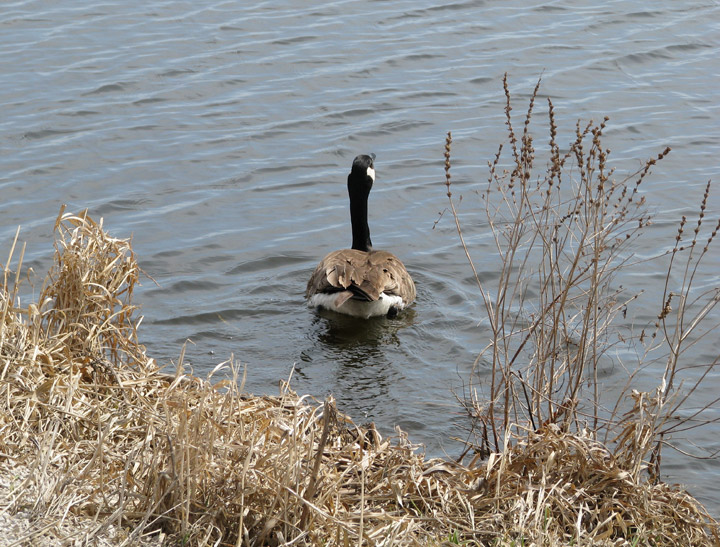 Canada Goose
looking over the marsh

Horicon Marsh was created by the Green Bay lobe of the Wisconsin glaciation during the Pleistocene era. The glacier, during its advance created many drumlins (a type of elongated hill) in the region, many of which have become the islands of Horicon Marsh. The marsh and surrounding Dodge County have the highest concentration of drumlins in the world. 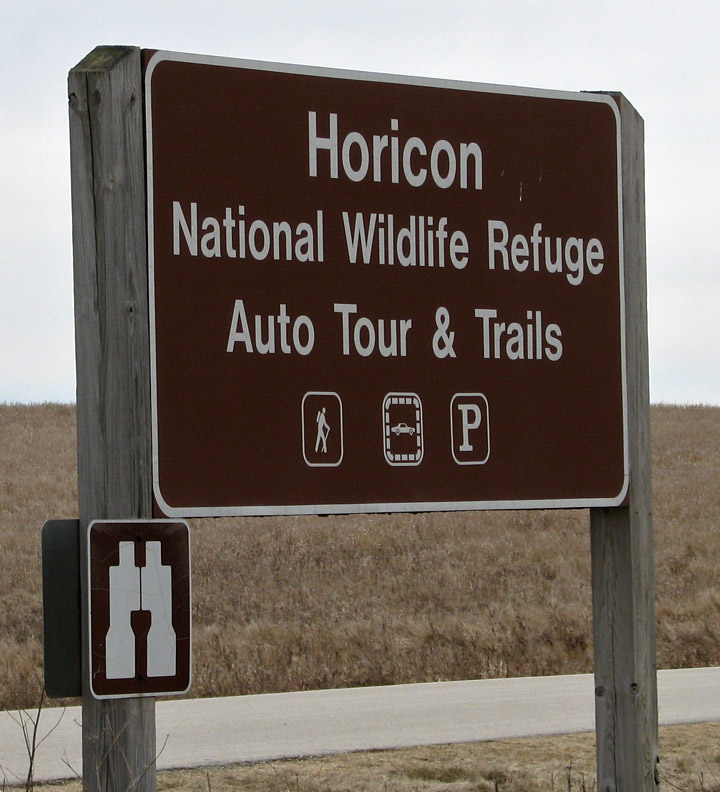 During the glacier's retreat, a moraine was created, forming a natural dam holding back the waters from the melting glacier and forming Glacial Lake Horicon. The Rock River slowly eroded the moraine, and the lake drained. As the levels of silt, clay and peat accumulated in the former lake's basin, the Horicon Marsh was formed. 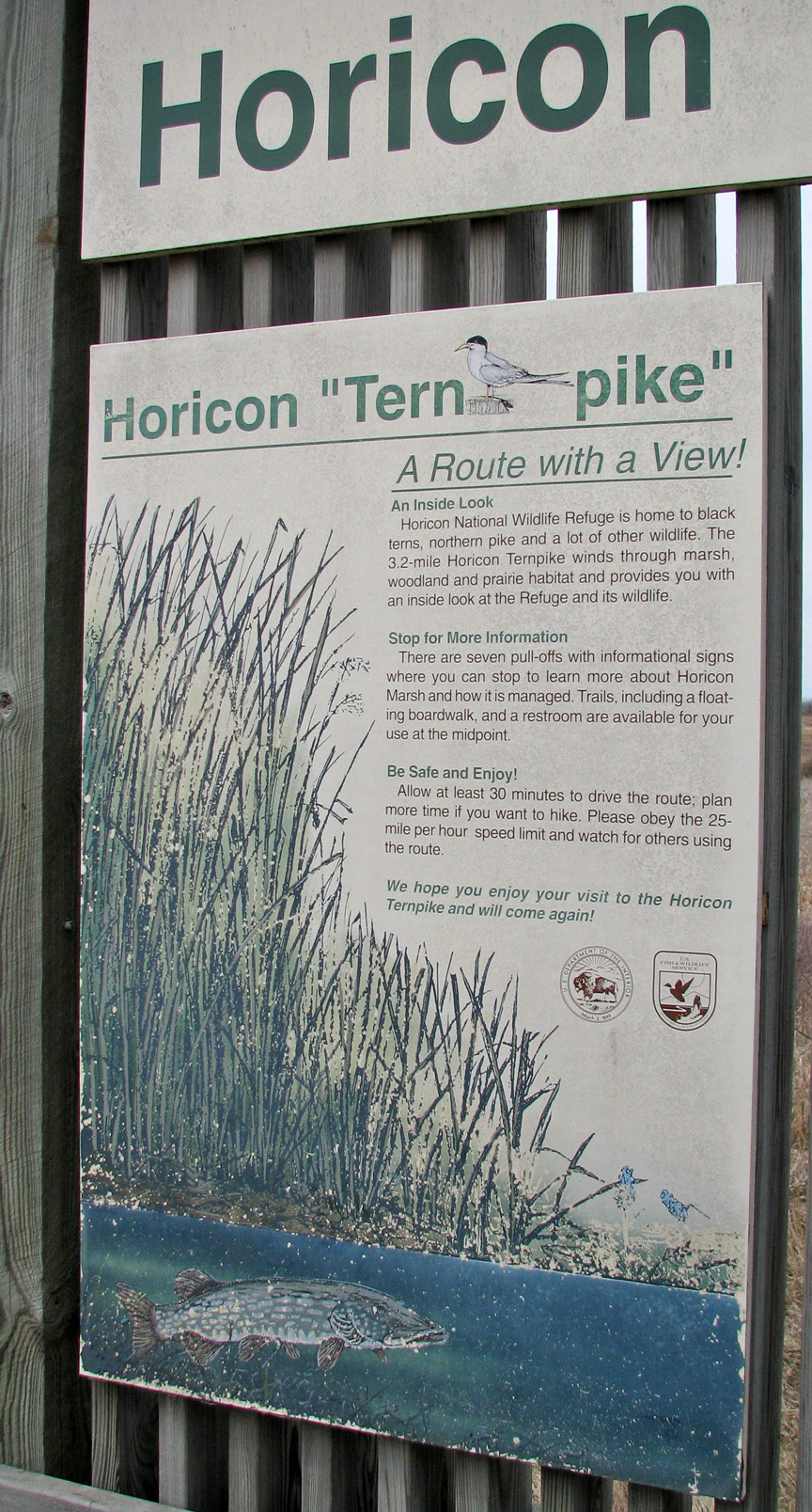 The Horicon Marsh State Wildlife Area is one of nine units of the Ice Age National Scientific Reserve system, being considered to contain unique, representative evidence of the Ice Age of the Pleistocene era. 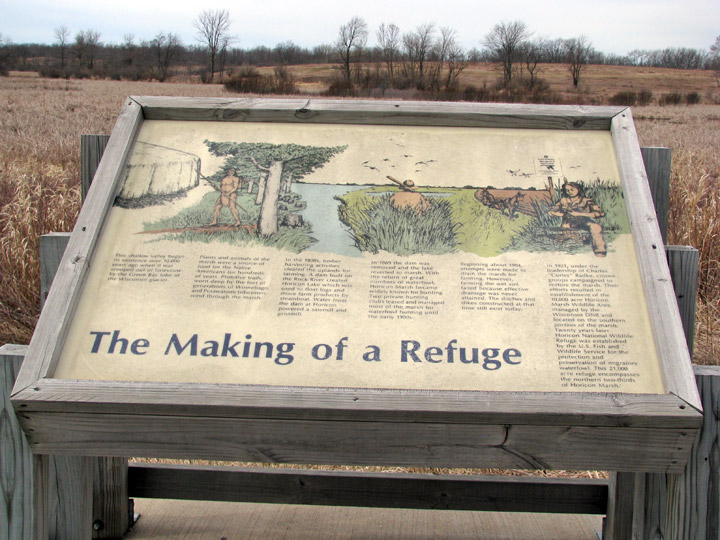 The Horicon Marsh area has been inhabited by people, including the Paleo-Indians, the Hopewellian people and the Mound Builders, since the ending of the last Ice Age. Dozens of 1200 year old effigy mounds were built by the Mound builders in the surrounding low ridges. Arrowheads have been found, dating to 12,000 years ago. Later the region was inhabited by the Potawotomi, primarily to the east of the marsh, and the Ho-Chunk to the west. Seven well-traveled Native American foot trails met at the southern end of the marsh at the present location of Horicon. 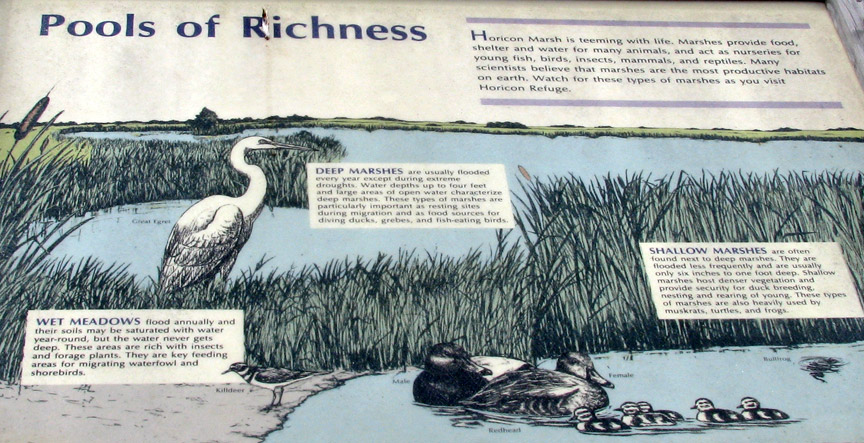 When Europeans first arrived in the area, they named the marsh "The Great Marsh of the Winnebagos". The first permanent modern settlement along the marsh was the town of Horicon. In 1846, a dam was built to power the town's first sawmill. The dam held the water in the marsh, causing the water level to rise by nine feet. The "marsh" was called Lake Horicon, and was, at the time, called the largest man-made lake in the world (although it is unclear whether this was literally true).

In 1869, the dam was torn down by order of the State Supreme Court, which ruled in favor of landowners whose land was flooded. The area became a marsh once more. Both birds and hunters flocked to the area, and the local duck population was devastated. From 1910 to 1914, an attempt was made to drain the marsh and convert it into farmland; these attempts failed, however, and afterwards the land was widely considered to be useless. 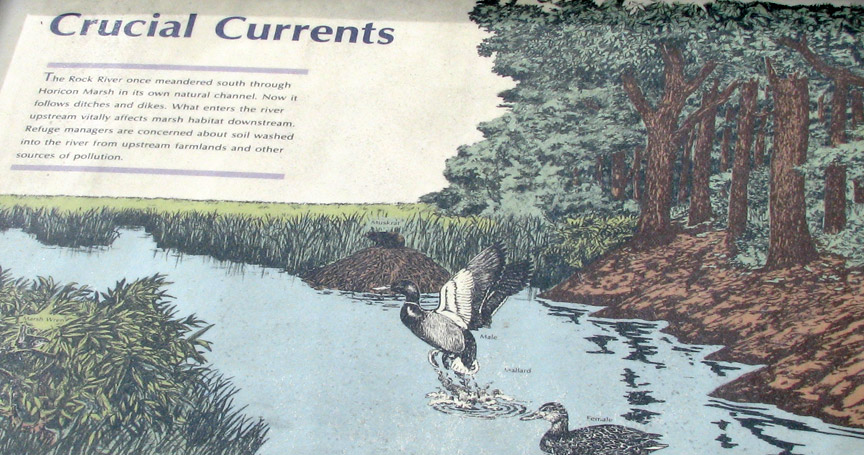 In 1927, the state legislature, after pressure from conservationists beginning in 1921, passed the Horicon Marsh Wildlife Refuge Bill, providing for the construction of a dam to raise the water to normal levels and for the acquisition of the land by the government. During the 1940's, the United States Fish and Wildlife Service bought the northern portions of the marsh. 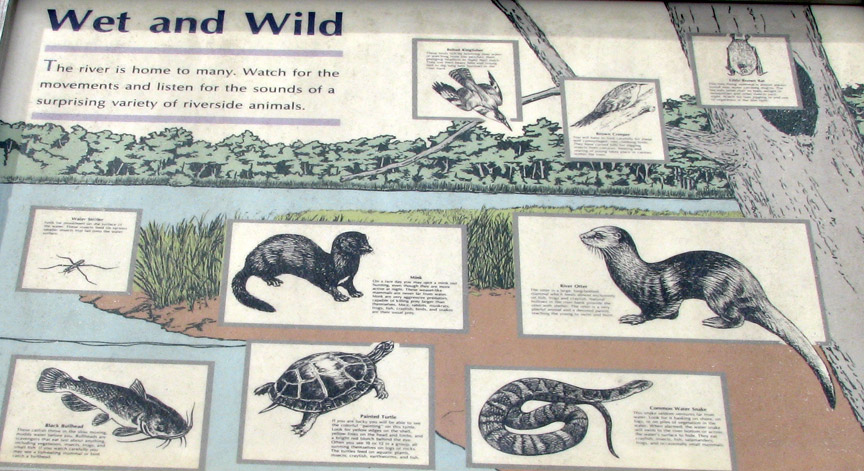 Presently, the marsh is 32,000 acres (130 km²) in area, most of it open water and cattail marsh. The southern third, approximately 11,000 acres (45 km²), forms the Horicon Marsh State Wildife Area (sometimes just Horicon Marsh Wildlife Area or, locally, the "State Area") which was established as a nesting area for waterfowl and resting area for migratory birds. Millions of waterfowl, including over 200,000 Canada geese, migrate through the marsh. It is owned by the state of Wisconsin and controlled by the Wisconsin Department of Natural Resources (DNR). 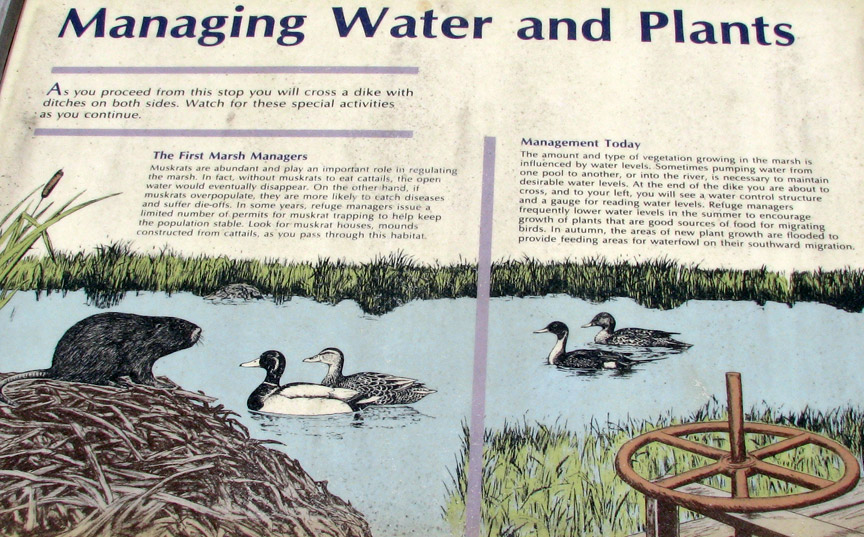 The northern two-thirds, approximately 21,000 acres (85 km²), forms the Horicon National Wildlife Refuge (locally called the "Federal Refuge"). Originally created as a nesting area for the redhead duck, it is controlled by the Fish and Wildlife Service. 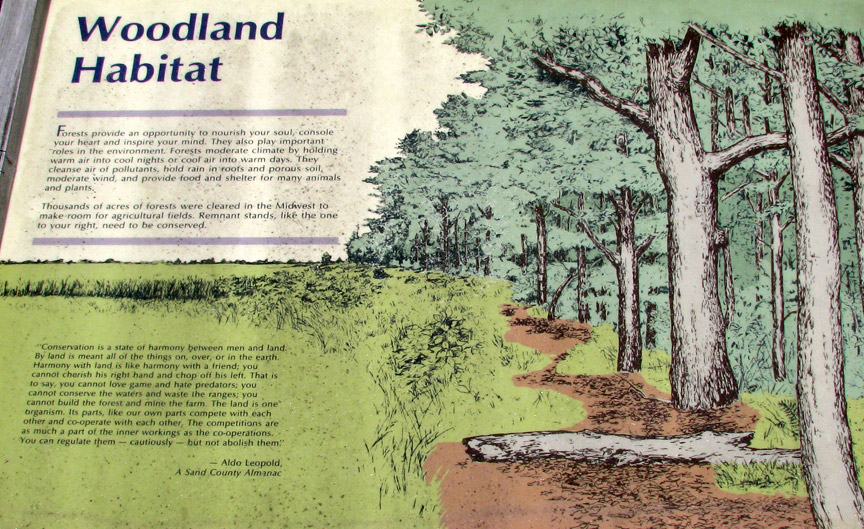 The refuges are known for their many species of birds, especially ducks, great blue herons, and Canada geese (which have become increasingly common since the 1980's), as well as fish, frogs, snakes, turtles, mammals, insects and plants. 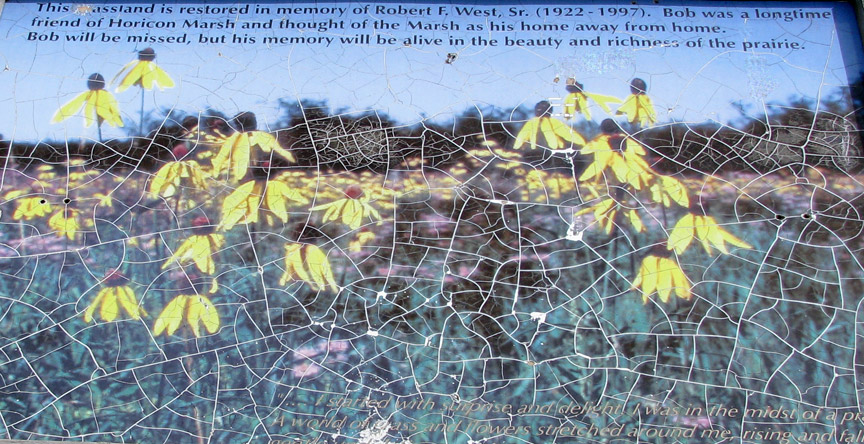 Horicon Marsh was designated a Ramsar site on December 04, 1990. 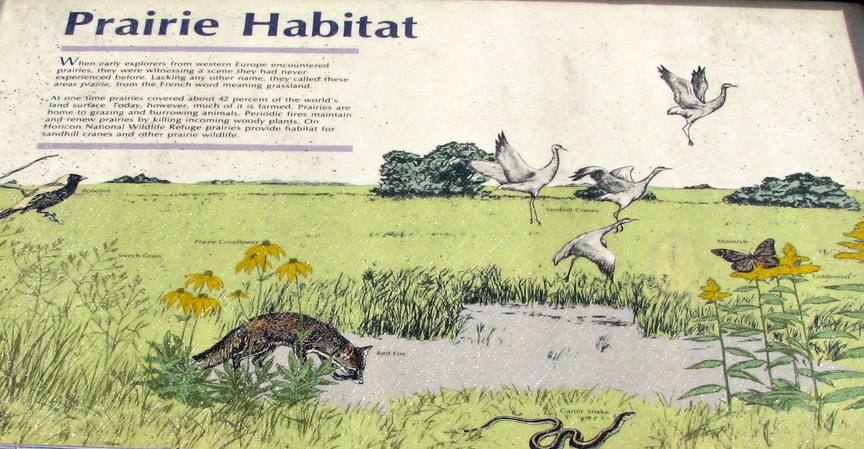