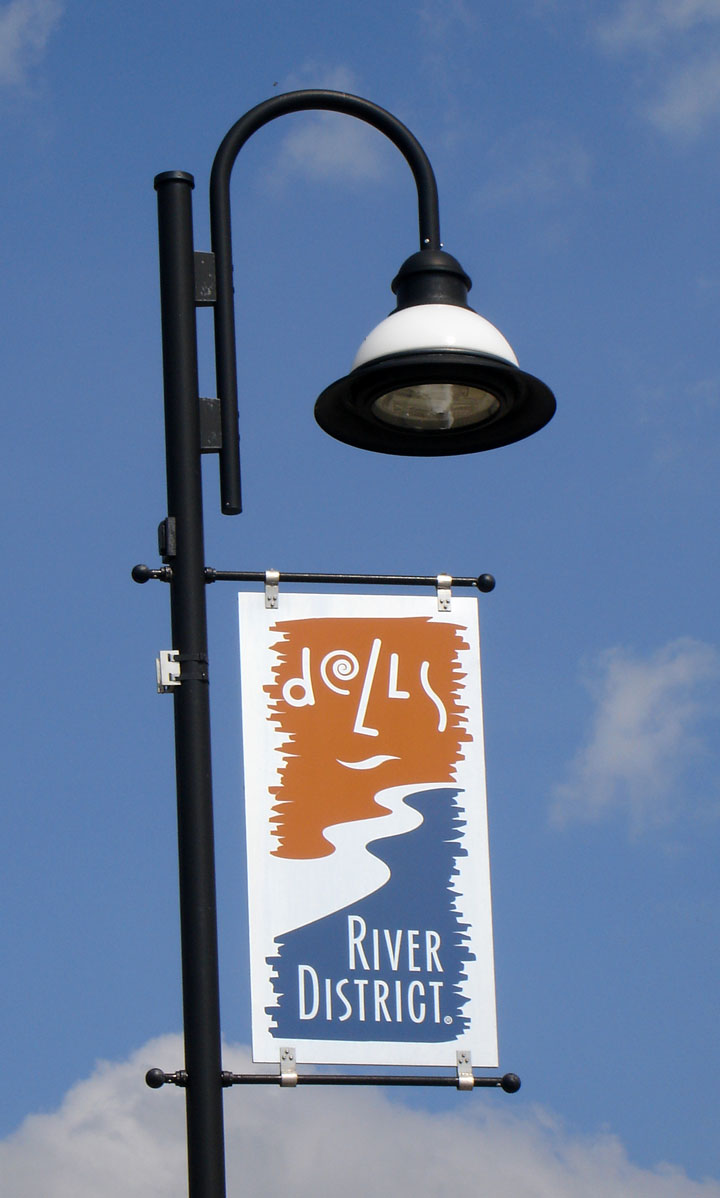 Wisconsin Dells is a city in south-central Wisconsin, with a population of 2,418 as of the 2000 census. It is located partially within four counties: Adams, Columbia, Juneau, and Sauk. The city takes its name from the dells of the Wisconsin River, a scenic glacially-formed gorge that features striking sandstone formations along the banks of the Wisconsin River. Together with nearby Lake Delton, the city forms an area known as "the Dells", a popular Midwestern tourist destination. The Dells area has an estimated five million annual visitors.

Dam on the Wisconsin River

With numerous indoor waterparks and outdoor waterparks in the Dells area, covering 70 acres (28 ha), Wisconsin Dells proclaims itself the "Waterpark Capital of the World". It is home to the largest outdoor water park in the U.S., Noah's Ark; the largest indoor waterpark resort, Wilderness Territory; and America's largest water and theme park resort, Hotel Rome at Mt. Olympus Water & Theme Park. Some other attractions in the Dells include the Dells Boat Tours, numerous golf courses, mini golf, go-kart tracks, water sports, horseback riding, Tommy Bartlett's Thrill Show, Exploratory, Ripley's Believe It or Not, Timber Falls Amusement the Ho-Chunk Casino and many other places of interest. Most attractions are located on the Strip, otherwise known as the Wisconsin Dells Parkway. Accommodations range from economical motels to RV parks, to chain hotels, to themed resorts featuring indoor and outdoor waterparks and other amenities. 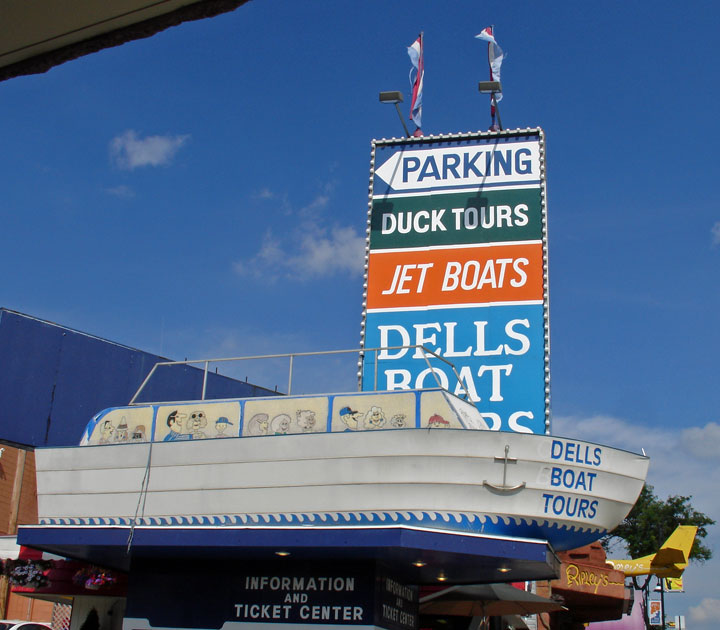 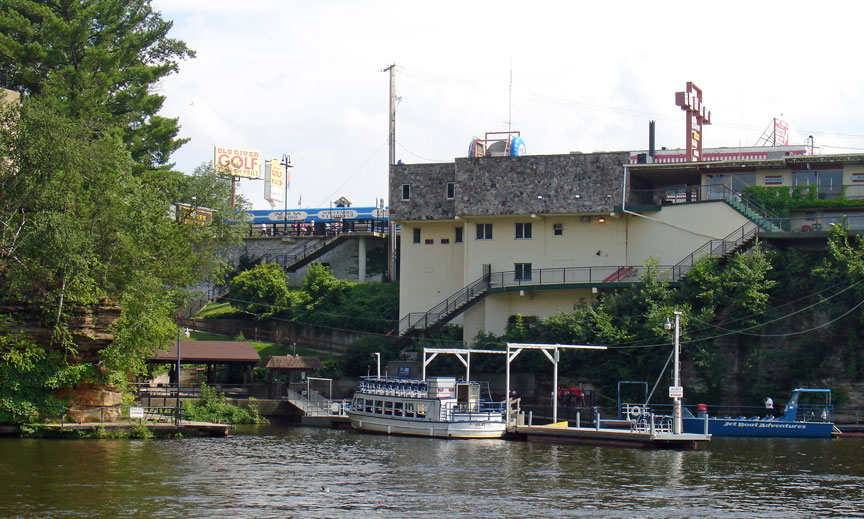 Early French explorers named the Dells of the Wisconsin River as "dalles", which means slabs. 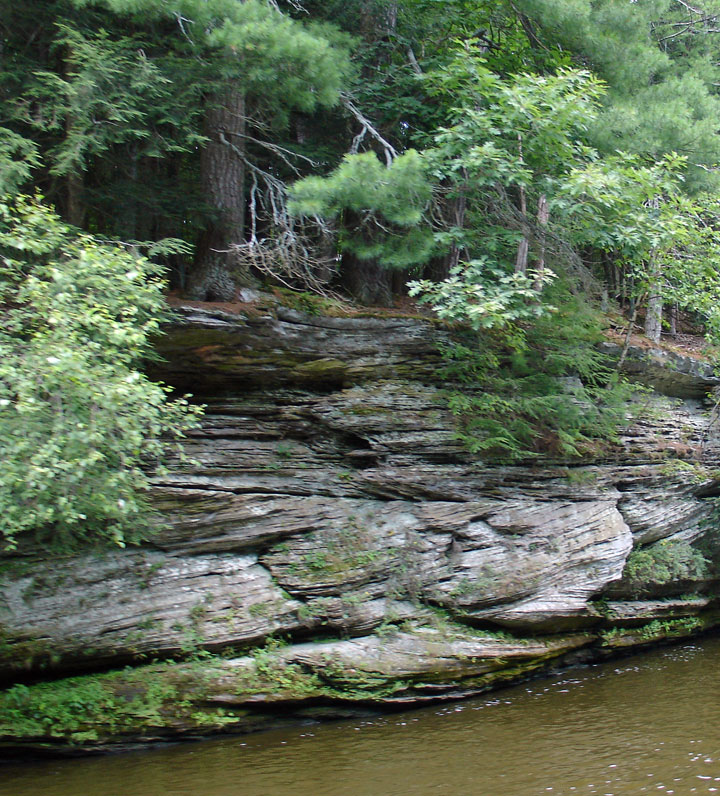 "dalles", which means slabs along the river bank

Wisconsin Dells was founded as Kilbourn City in 1857 by Byron Kilbourn, who also founded Kilbourntown, one of the three original towns at the confluence of the Milwaukee, Menomonee, and Kinnickinnic Rivers that joined to become Milwaukee. Before the establishment of Kilbourn City, the region around the dells of the Wisconsin River was primarily a lumbering area until 1851, when the La Crosse and Milwaukee Railroad was chartered, with Kilbourn as its president. The railroad made plans to bridge the Wisconsin River near the river's dells, and a boomtown named Newport sprang up at the expected site of the bridge in 1853. The population of this new city quickly swelled to over 2,000, but when the railroad finally came through the area in 1857 it took nearly everyone by surprise by crossing the river a mile upstream from the site of Newport. As a result, Newport was rapidly turned into a ghost town as the settlers flocked to the new city at the site of the railroad bridge, Kilbourn City. Gradually, tourism became a large part of Kilbourn City. To make it easier for tourists to identify Kilbourn City with the natural landscape for which it was famous, the name of the city was changed to Wisconsin Dells in 1931. As the twentieth century progressed, new attractions began to draw even more tourists. 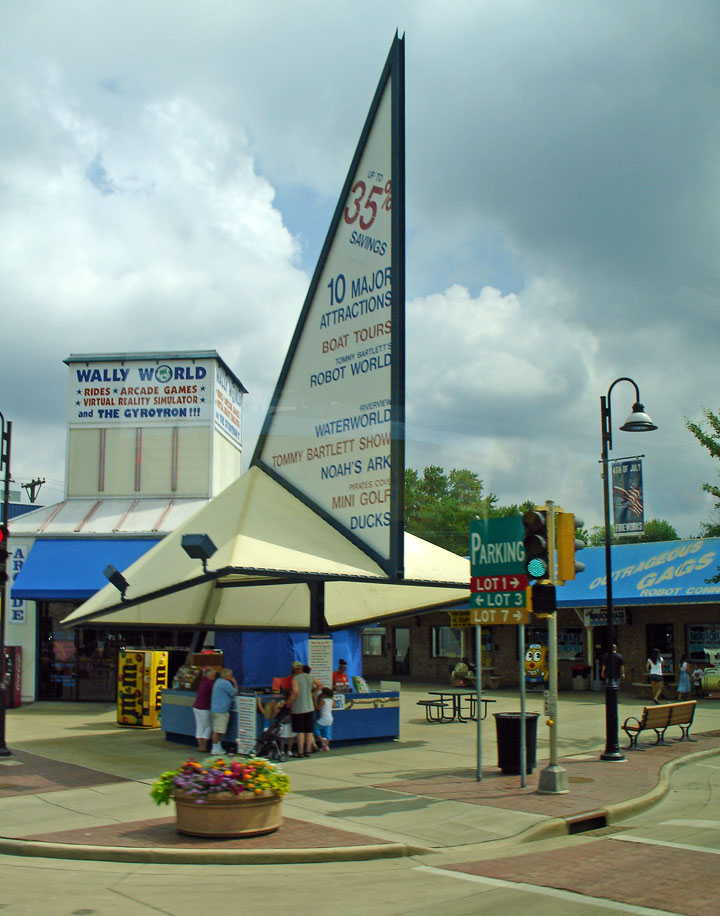 Because of the scenery provided by the dells of the Wisconsin River, Kilbourn City quickly became a popular travel destination in the Midwest. In 1875, early landscape photographer H. H. Bennett established a studio in the city and took many photos of the sandstone formations in the dells, including stereoscopic views. Prints of these photographs were distributed across the United States, further enhancing the status of Kilbourn City as a destination for sightseers. Taking advantage of this, Bennett began offering to take souvenir pictures of visitors to the dells, becoming one of the first to capitalize on the area's burgeoning tourist trade. Today, the H. H. Bennett Studio is a historic site operated by the Wisconsin Historical Society. 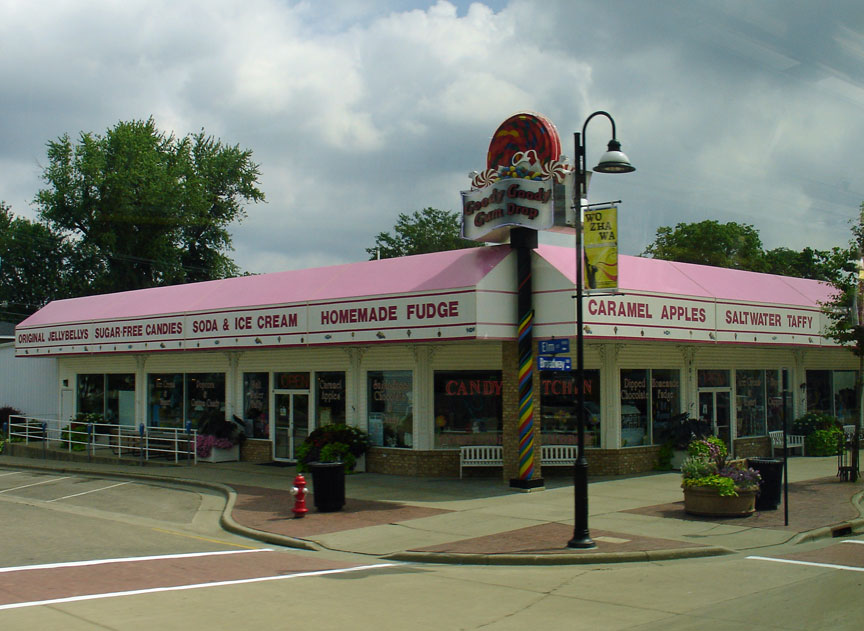 The dells region remained primarily a place for sightseers to escape the bustle of the city for many decades. In 1856, Leroy Gates began taking tourists on boat tours of the Wisconsin Dells. These tours were given using wooden rowboats until 1873 when the first steamboat, the Modocawanda, was used. By 1894, distillate-powered tour boats began to be used. In 1908, the Kilbourn Dam was installed by what is now Alliant Energy, over the protests from people such as H. H. Bennett, separating the Dells into the Upper and Lower Dells. 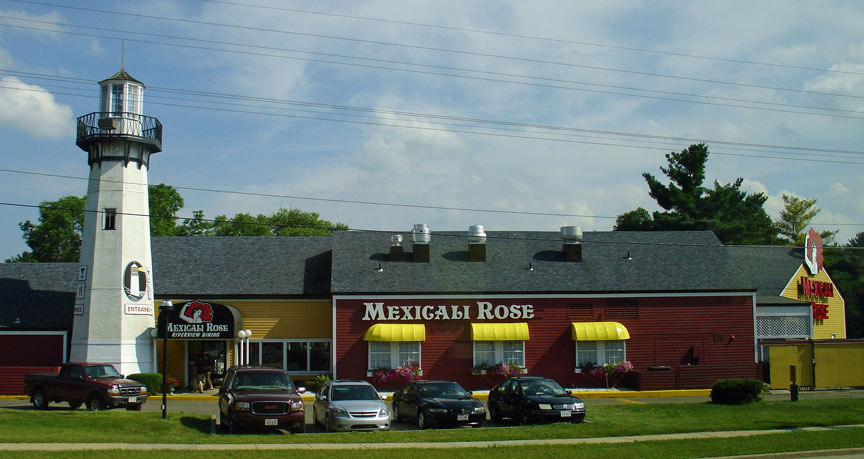 Since the time of LeRoy Gates, the Dells Boat Tours have gone through many operators. Some of the previous companies were The Riverview Boat Line, The Olson Boat Line (owned by Jack B. Olson), The Dells Boat Company, the Consolidated Boat Company and the Silver Dollar Boat Line. 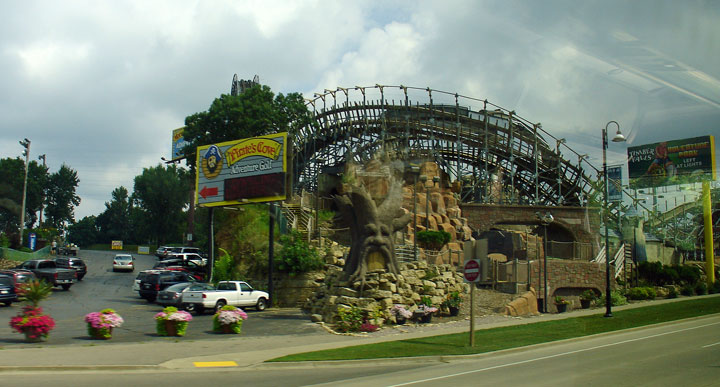 A few other events of interest took place during this time, including the June 16, 1911 impact of a 772-gram stony meteorite in rural Columbia County near the city, damaging a barn. 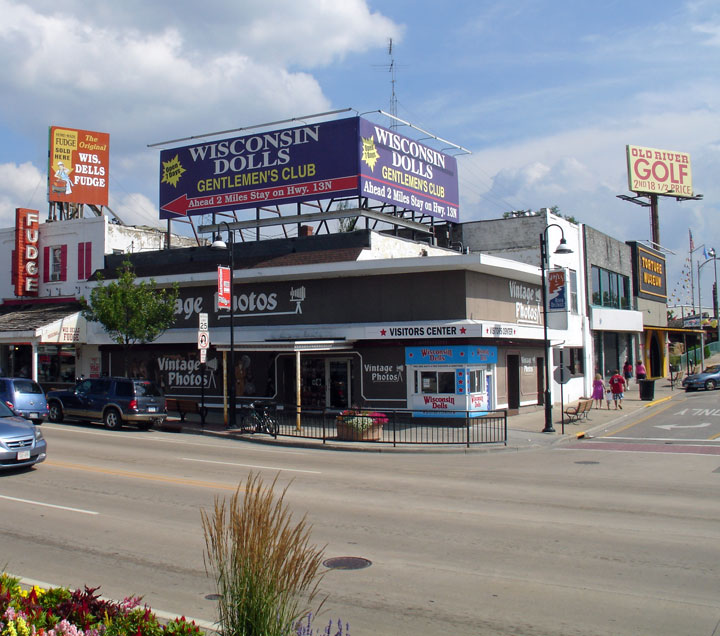 In 1946 a Milwaukee native named Mel Flath brought the first DUKW to the Wisconsin Dells. It was an impulse buy that he had made at a government auction in California; the trip's purpose had been to purchase war surplus trucks. Mel opened the "Dells Amphibian Line", which gave 90-minute tours in the Wisconsin River, exposing tourists to the area's famous sandstone formations. Mel eventually sold his duck fleet to the Associated Boat lines in 1952, which renamed themselves the Wisconsin Ducks, Inc. In 1952 the Wisconsin Ducks, Inc. began offering tours of the river dells and adjacent areas using decommissioned amphibious DUKW vehicles from World War II. Jack B. Olson started the Wisconsin Ducks, Inc.; they remain one of the area's most popular attractions. However, duck competition was far from over after the 1952 sale. Mel Flath opened up a duck ride again briefly from 1964 to 1966. 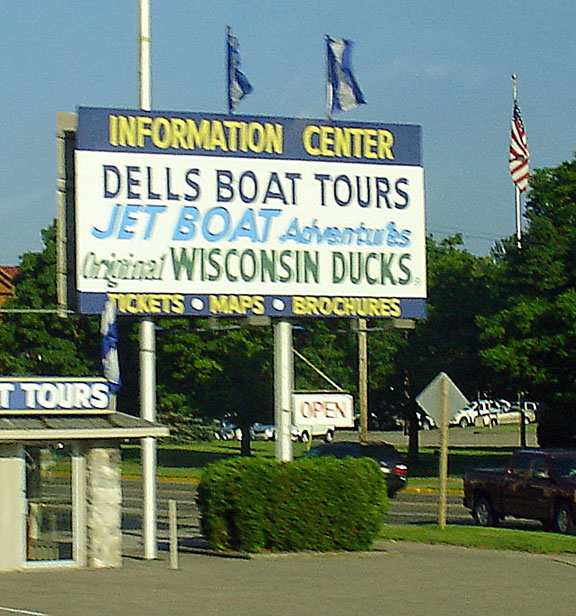 When he was bought out again, the Soma Boat Company opened their own duck ride on Mirror Lake, near Lake Delton, which they called the Aquaducks. In response to the competition, Wisconsin Ducks, Inc. assumed the name "Original Wisconsin Ducks". The Aquaducks existed from 1968 until their sale to the boat lines in 1976. In 1977 yet another duck ride began, this one by Mel Flath's daughter and son-in-law, George and Suzanne Field, named Dells Duck Tours, Inc., operating from the same property as Mel had 30 years earlier. This time sporting a red, white and blue exterior, these ducks, while not the "original" ducks that were first brought to the dells, were still World War II production models. Today, the Dells Duck Tours, Inc. are known as the Dells Army Ducks after a paint scheme change in 2002.

Lake Delton, Wisconsin Dells' sister city to the south, gradually became popular as the Dells attractions spread out. The Wonder Spot was founded in Lake Delton in 1952, and remained open until 2006. In 1952, a new traveling performance from Chicago called the "Tommy Bartlett's Thrill Show" came to Lake Delton on its second stop.

Following the show's huge success in the city, its owner, Tommy Bartlett, chose to keep the performance permanently in Wisconsin Dells. To promote the show, Bartlett gave away bumper stickers advertising his thrill show and the city, effectively spreading word about the area across the nation. Soon more attractions followed to serve the ever-increasing number of tourists, along with countless hotels, shops, and restaurants.

Lunch at the Thunder Valley Inn