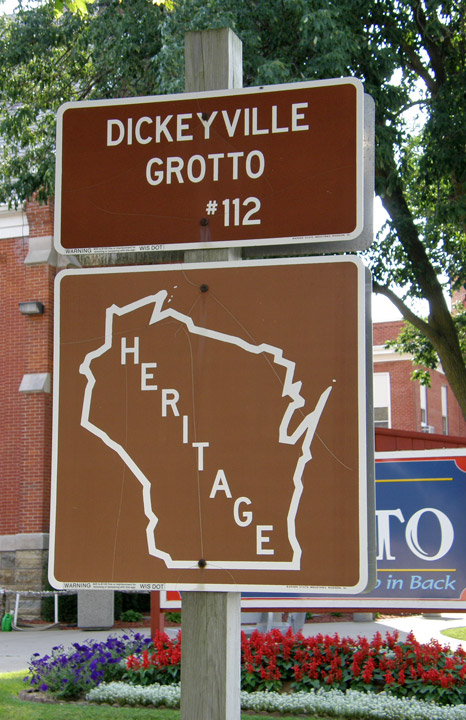 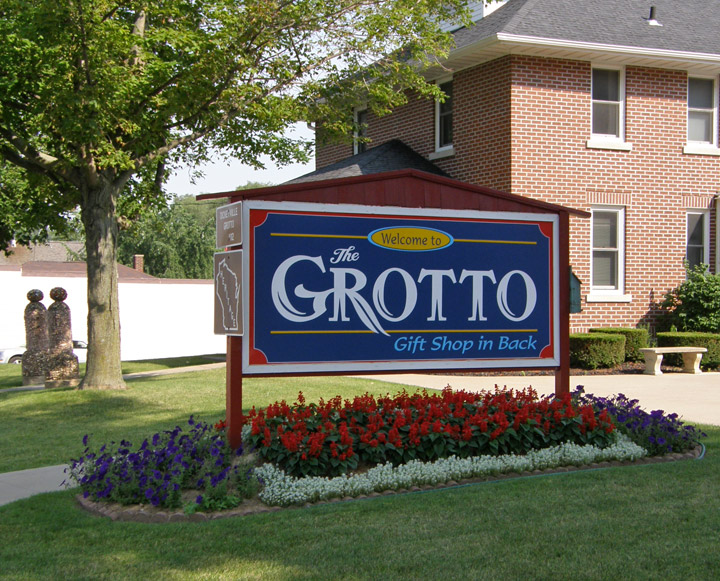 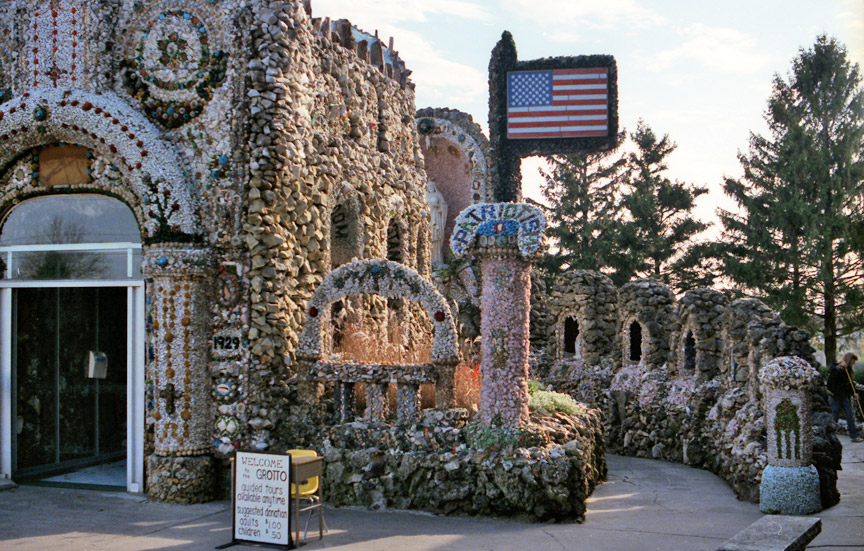 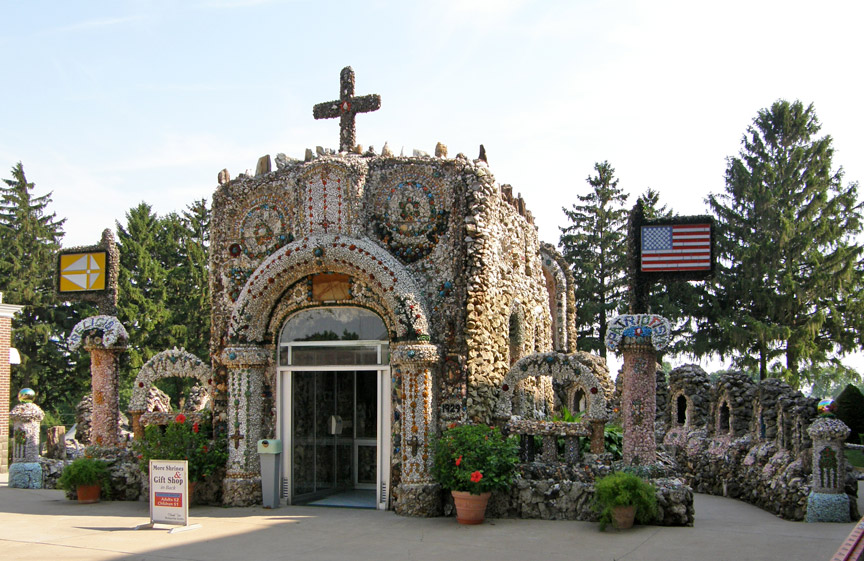 Something very odd happened in the Midwest in the early 20th century. Suddenly, seemingly ordinary people began stockpiling bits of broken glass, rocks, bottles and assorted debris, which they then used to build what are known locally as cement gardens or grottos. 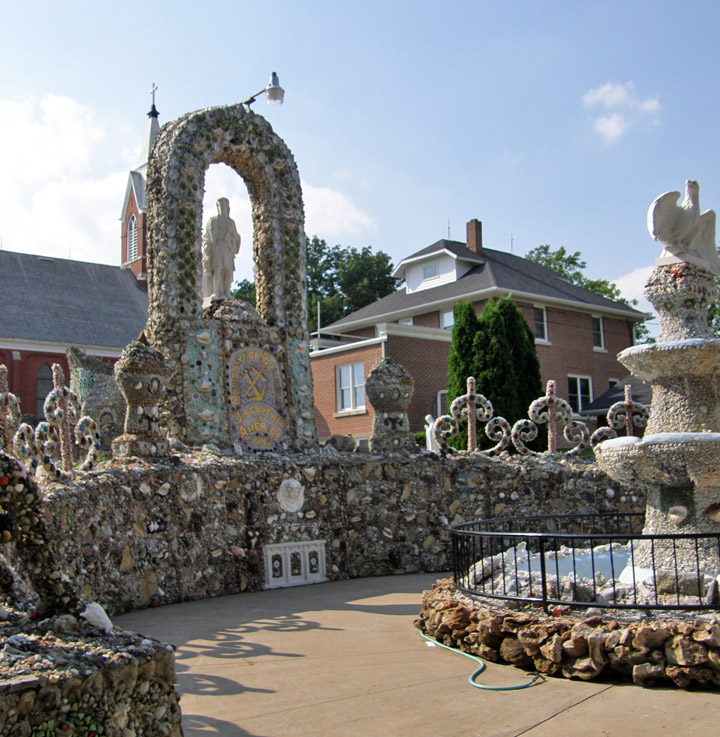 The Columbus edifice in the Holy Ghost Park 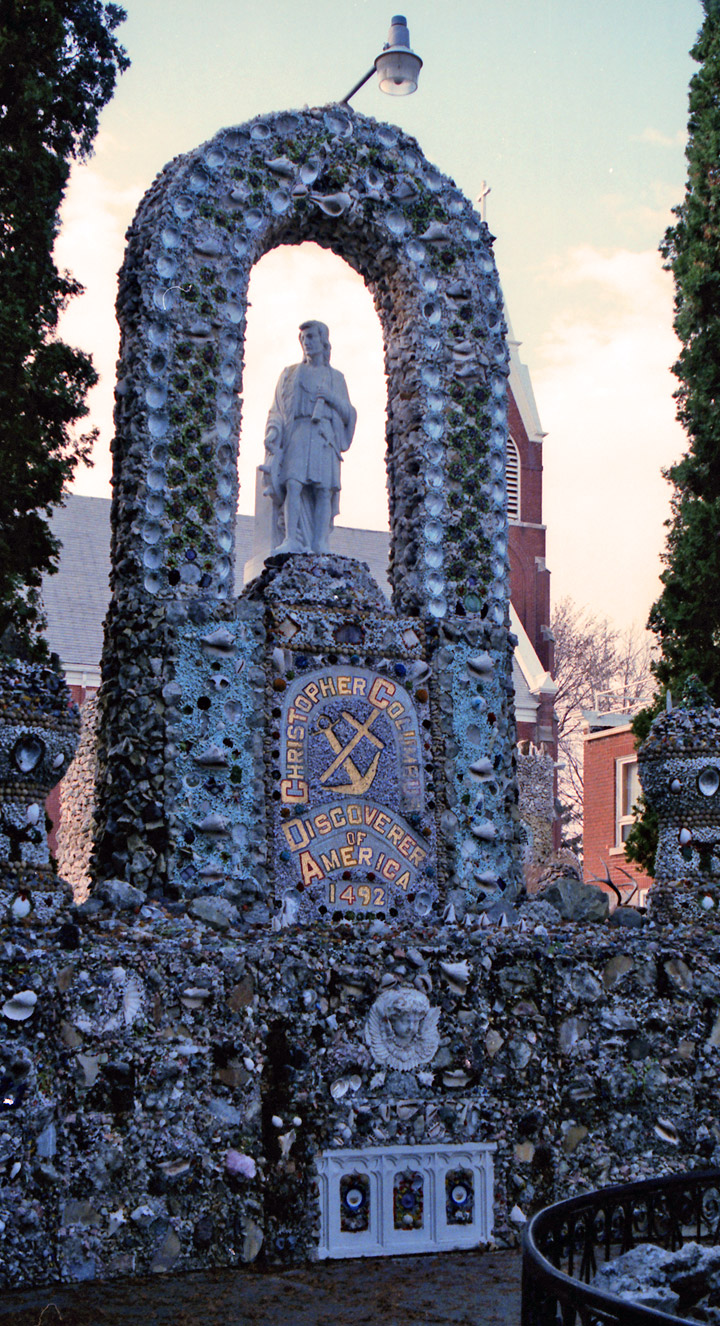 Why did they cover their houses with found objects, fill their yards with homemade statues, or build huge shrines of cement embedded with things that other people throw away? According to Marge Timmerman, a guide at Wisconsin's Dickeyville Grotto, Wisconsin's concrete construction frenzy can be partly traced back to a centuries-old religious tradition. 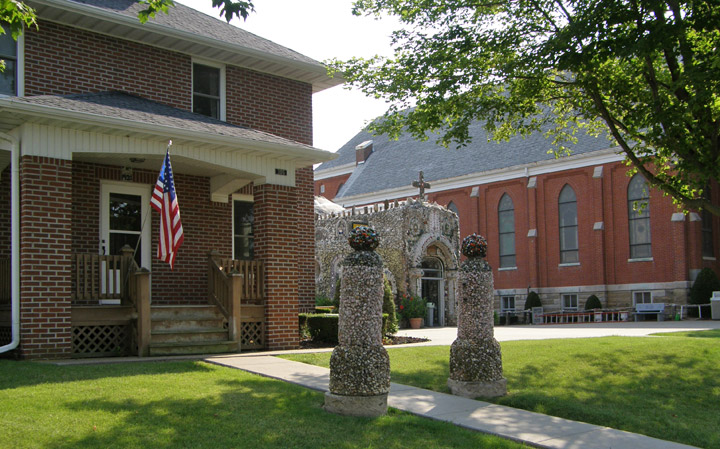 the Grotto between the church and the religious residence

"Many of the people who immigrated here came from a culture where it was normal to promise to build something big if your prayers were answered," said Timmerman. "I believe the tradition dates back to the time of the European plagues. People, entire villages, would vow that if they were saved from the plague they would build a shrine in thanks. "Plus, some people just like to build stuff," Timmerman added. "It's in their nature." 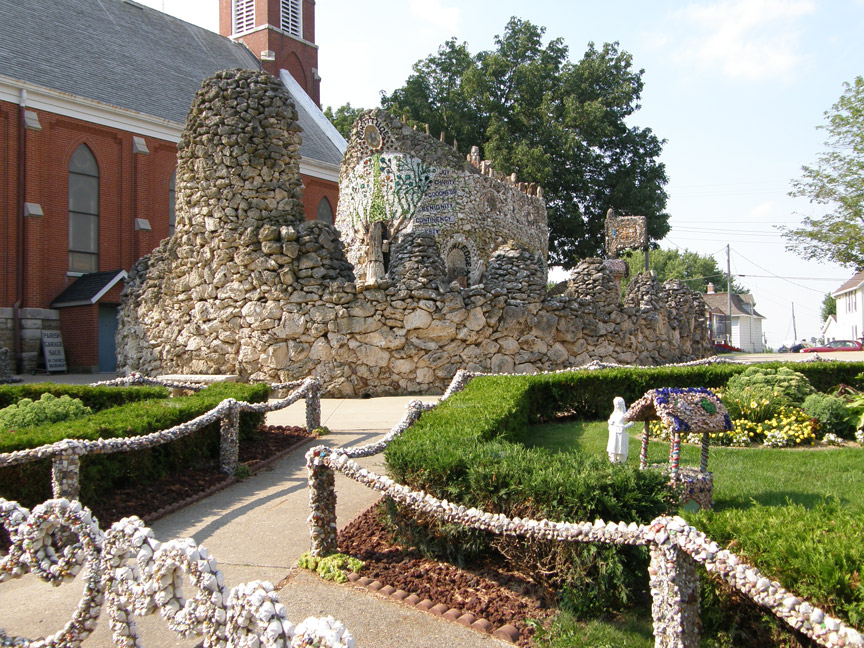 rear of the Grotto as seen from Holy Ghost Park

Dickeyville isn't the biggest or the strangest grotto in the Midwest. It's notable primarily for the vast concentration of objects that are imbedded in the structure's cement walls. There are three shrines within the Dickeyville Grotto. Two are dedicated to religious subjects, the other to patriotic sentiments with enshrined statues of Christopher Columbus, George Washington and Abraham Lincoln. 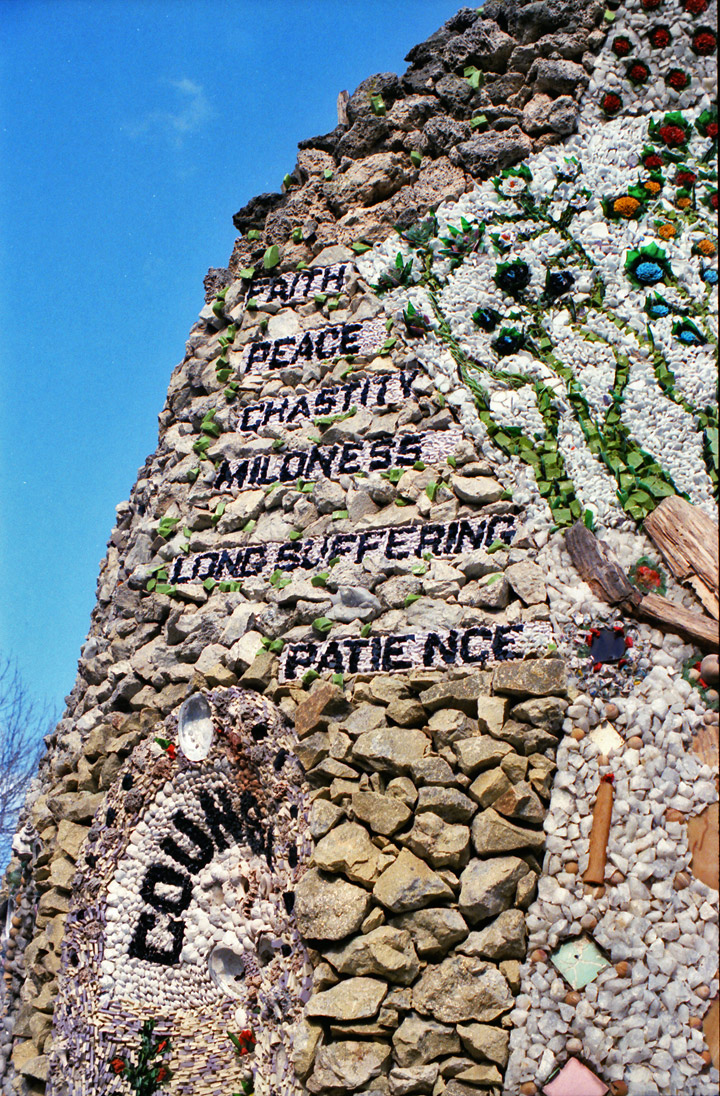 Photos of the Rock Mosaic taken in 2007

The main grotto has a small artificial cave, statue alcoves, arches and fountains. All are almost completely encrusted with thousands of shards of sparkling glass, smashed and intact ceramic plates and statues, shells, marbles, semiprecious minerals, chunks of wood, fragments of tile, junk jewelry and even a few doorknobs. 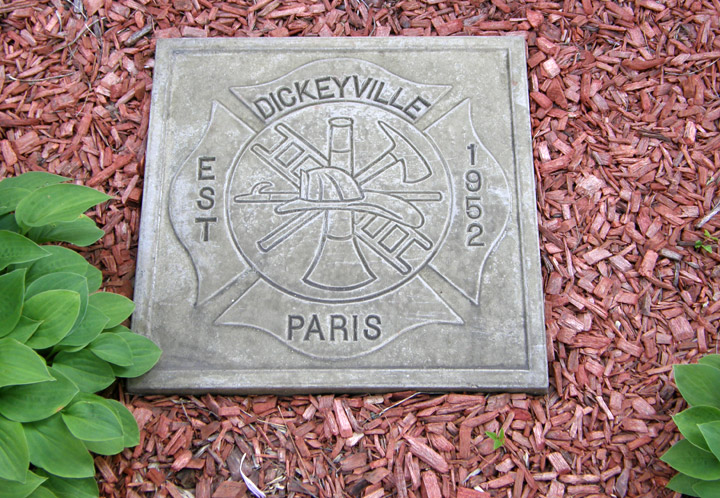 Built primarily by Father Mathias Wernerus, the Dickeyville Grotto became a community project during the priest's last years. After Wernerus died in 1931, locals completed the section of the grotto he'd been working on and stopped construction until 1963, when they added some new pieces. Nothing else has been added or altered since. 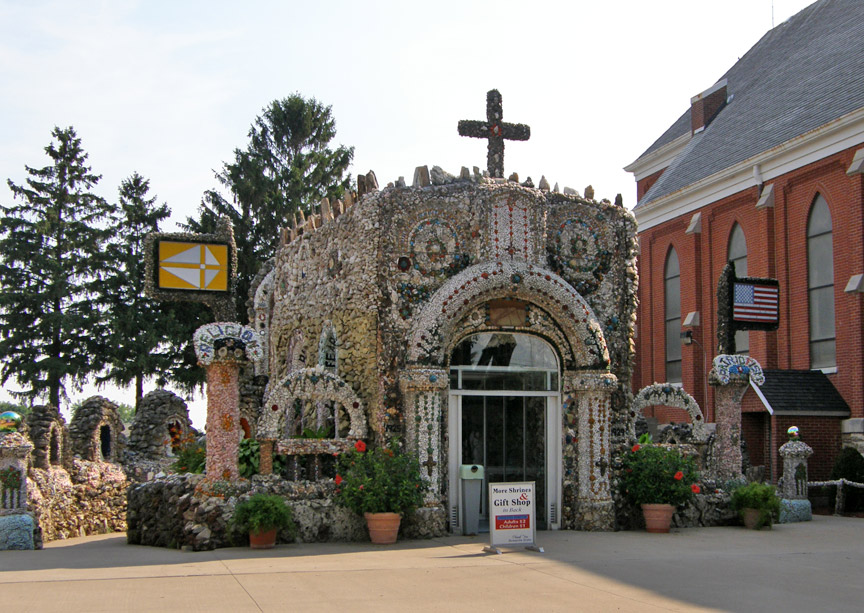 Timmerman said that none of the Midwest's grotto builders had formal training in architecture or art. They simply made forms out of wood or wire, covered them in concrete, then added the decorative accents. "A person would see a grotto and think 'I could do that' and go home and do it, and pretty soon we had a lot of grottos in this state," said Timmerman. 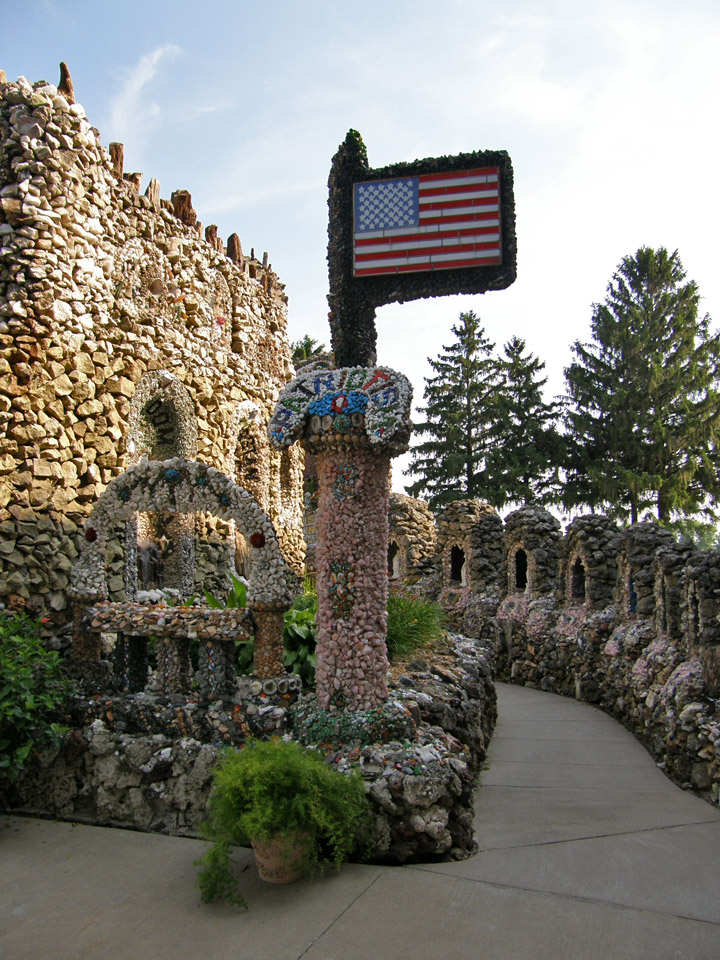 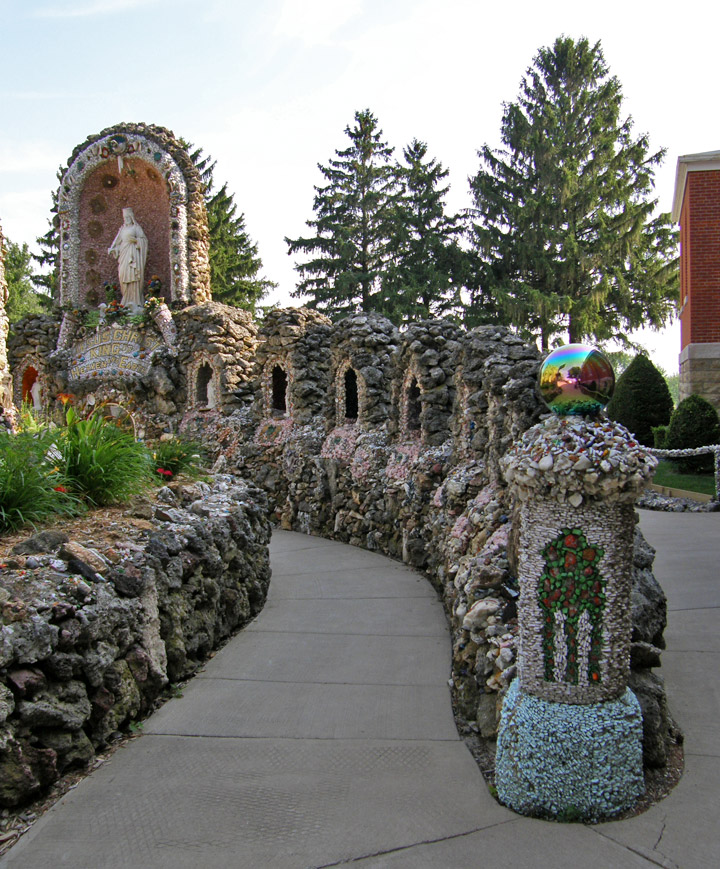 That didn't happen. The grotto is not overrun with pilgrims and you can't buy snacks, though there is a small Catholic gift store at the back of the property. 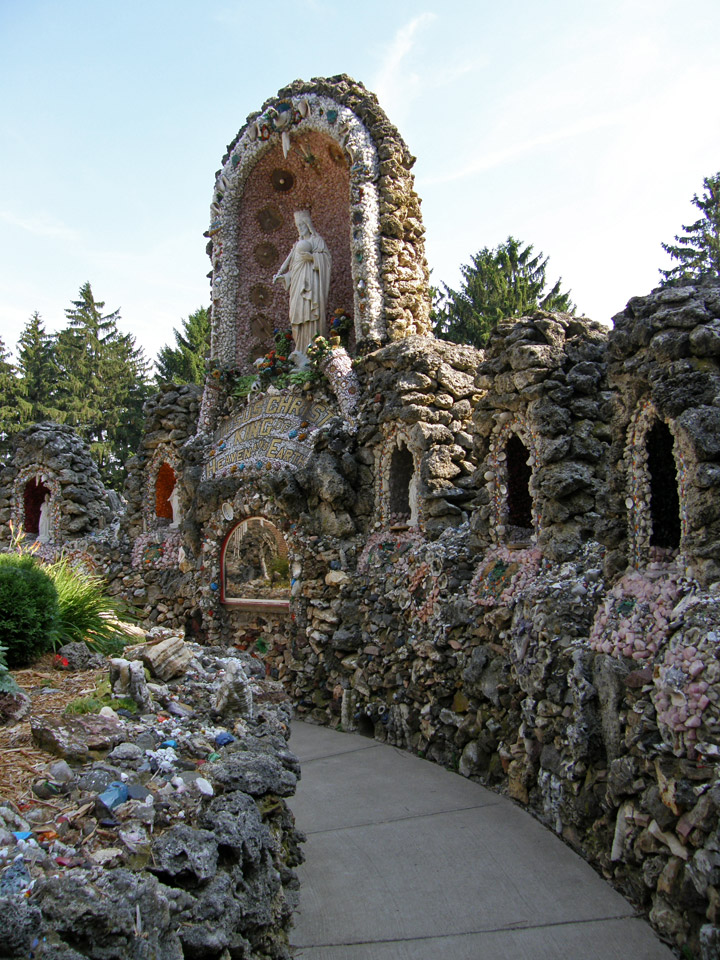 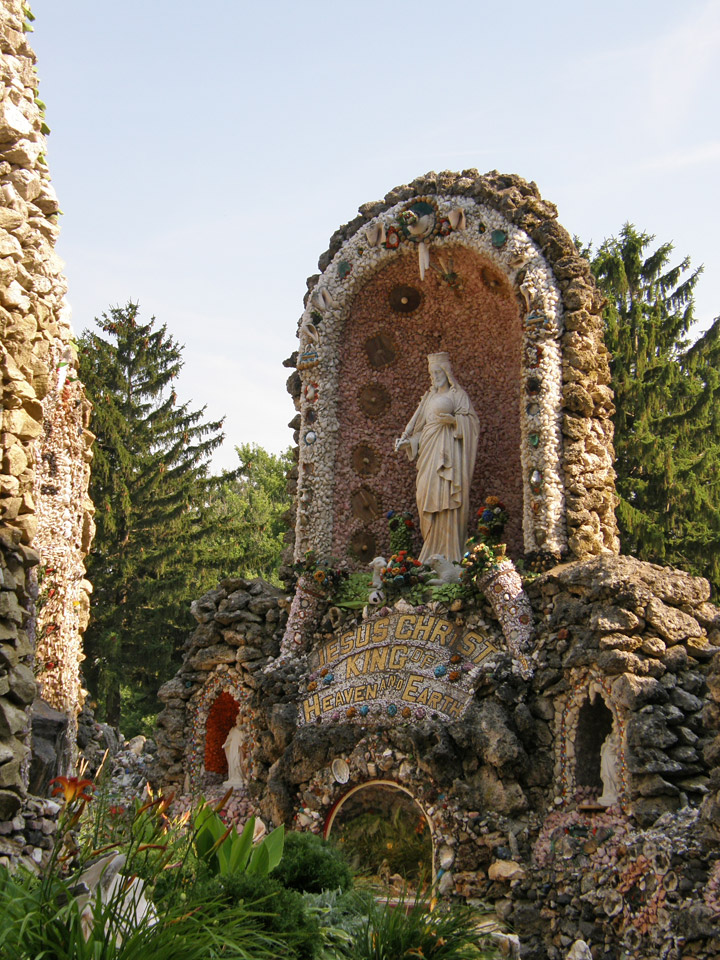 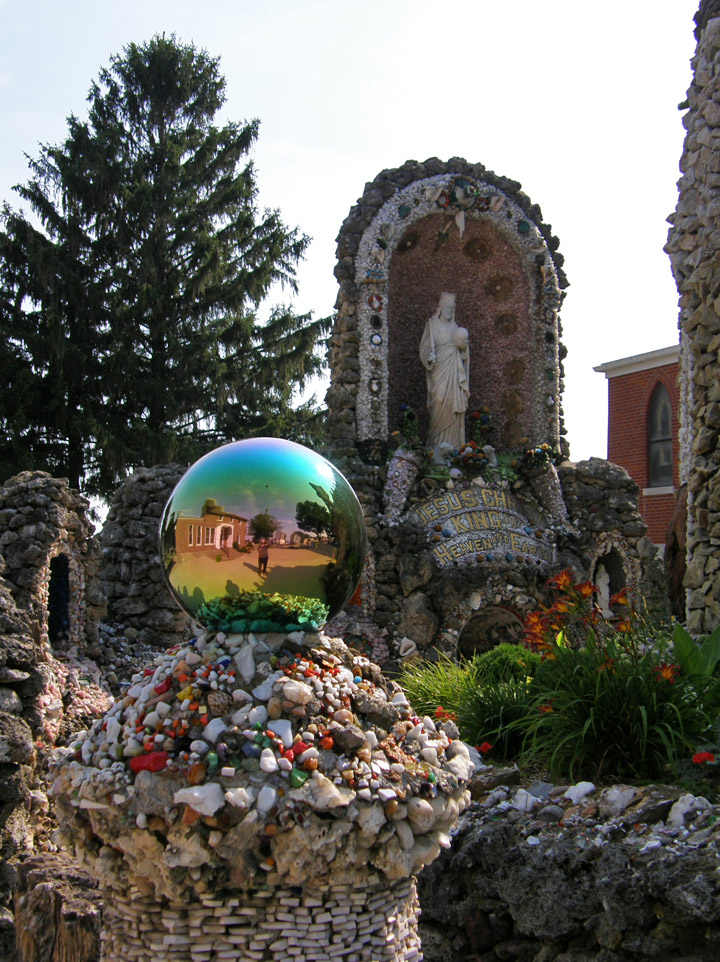 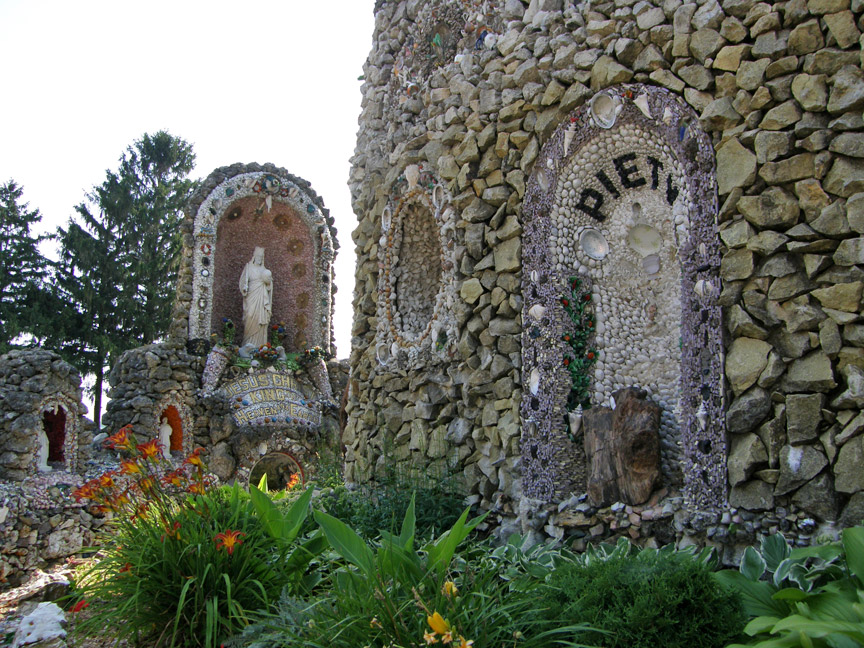 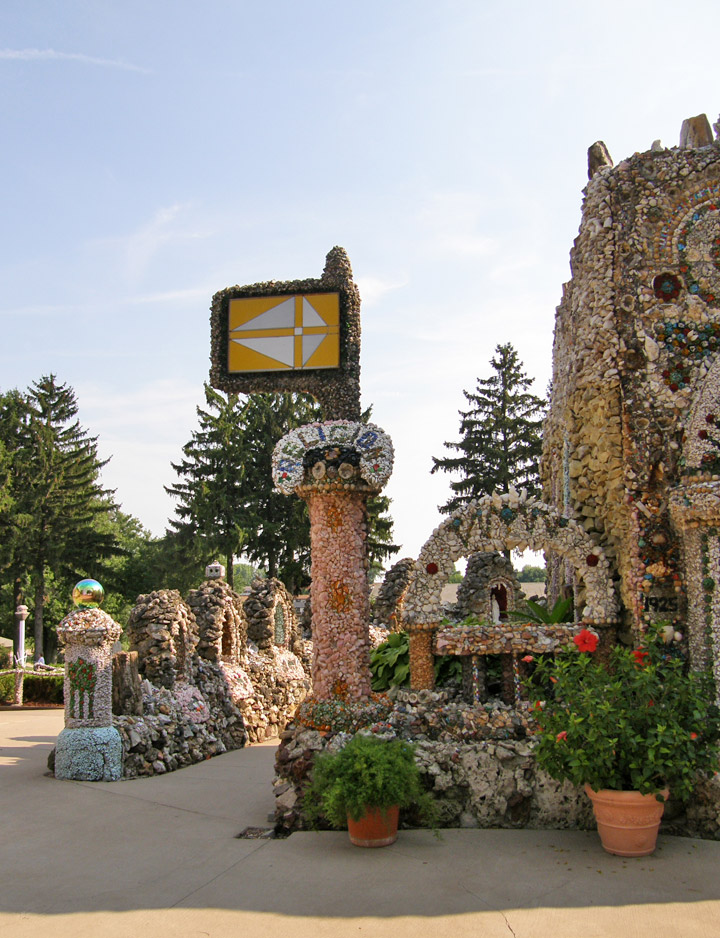 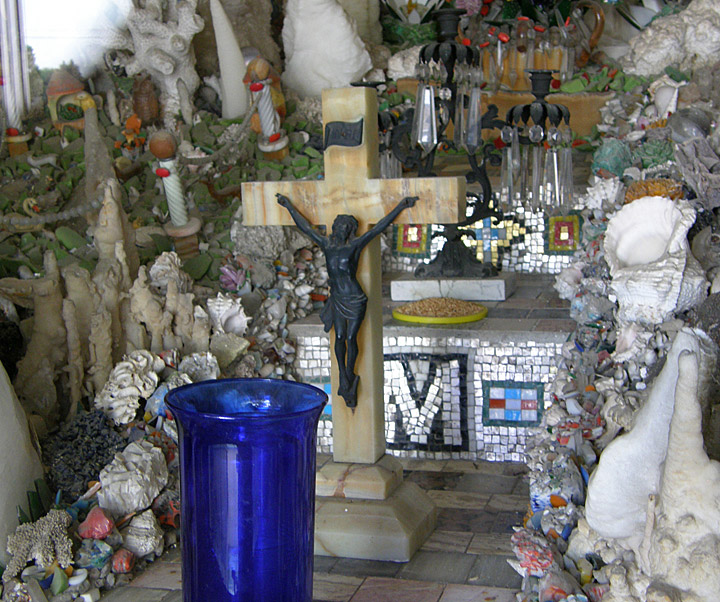 inside of the Grotto 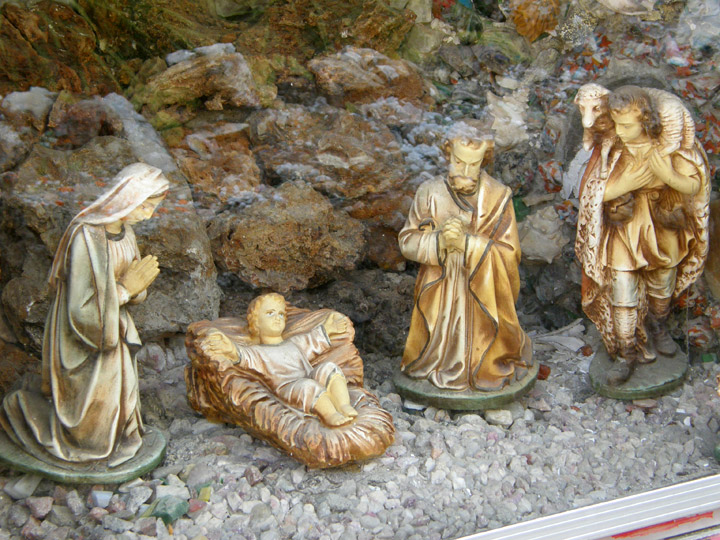 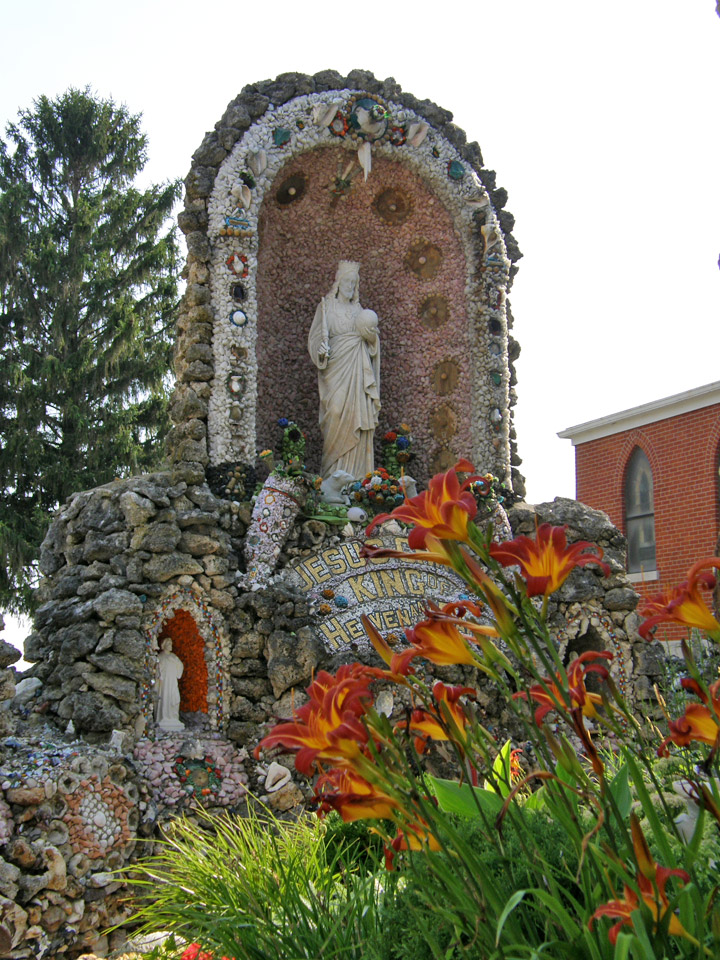