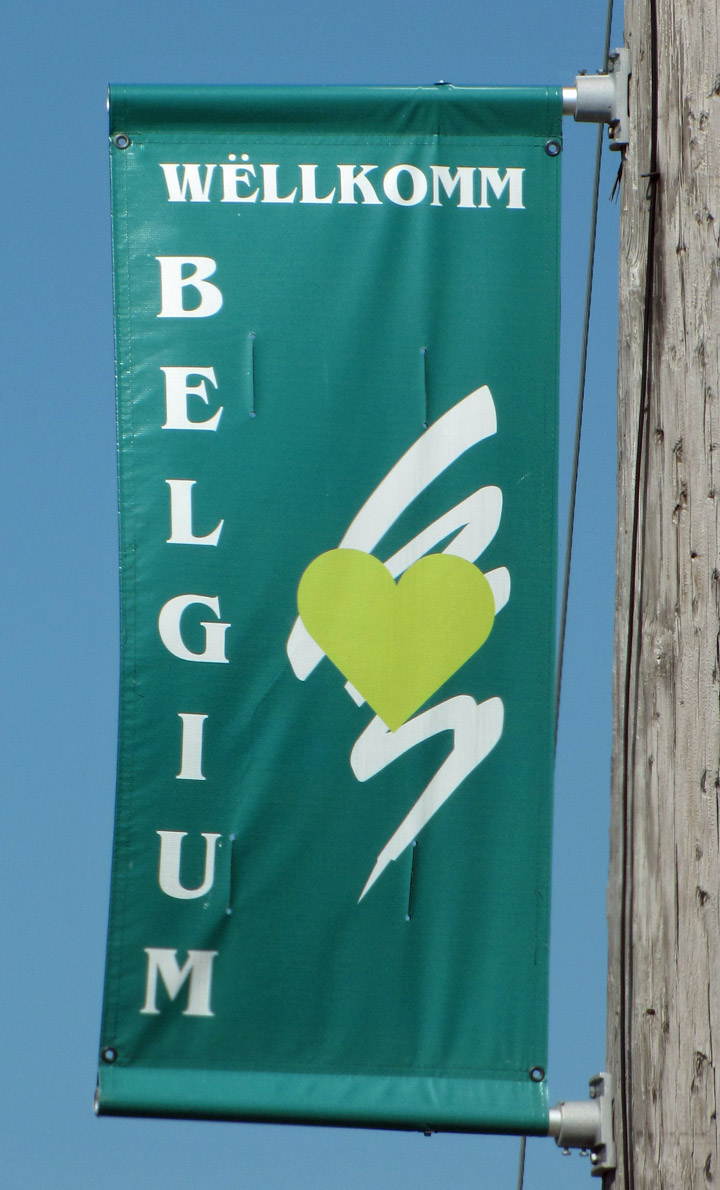 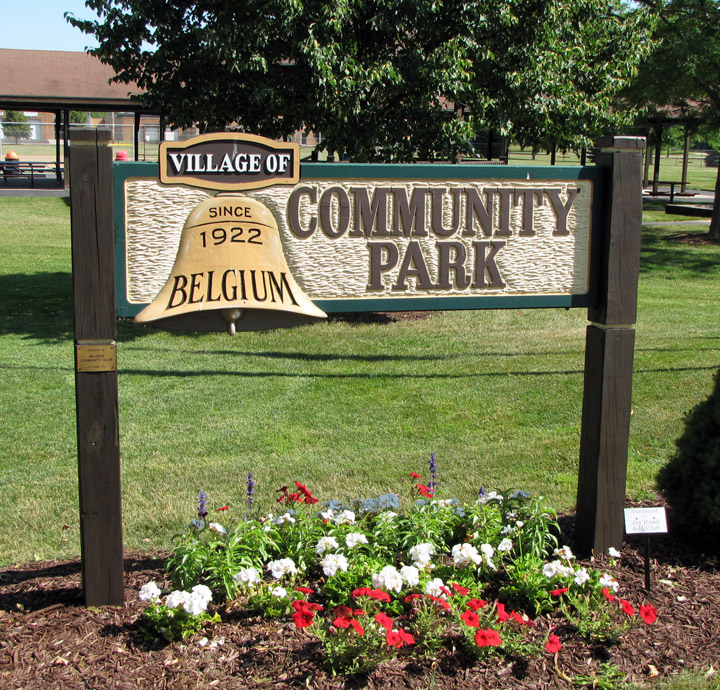 Belgium is a village located in the Town of Belgium in Ozaukee County, Wisconsin, United States. The population was 1,678 at the 2000 census. 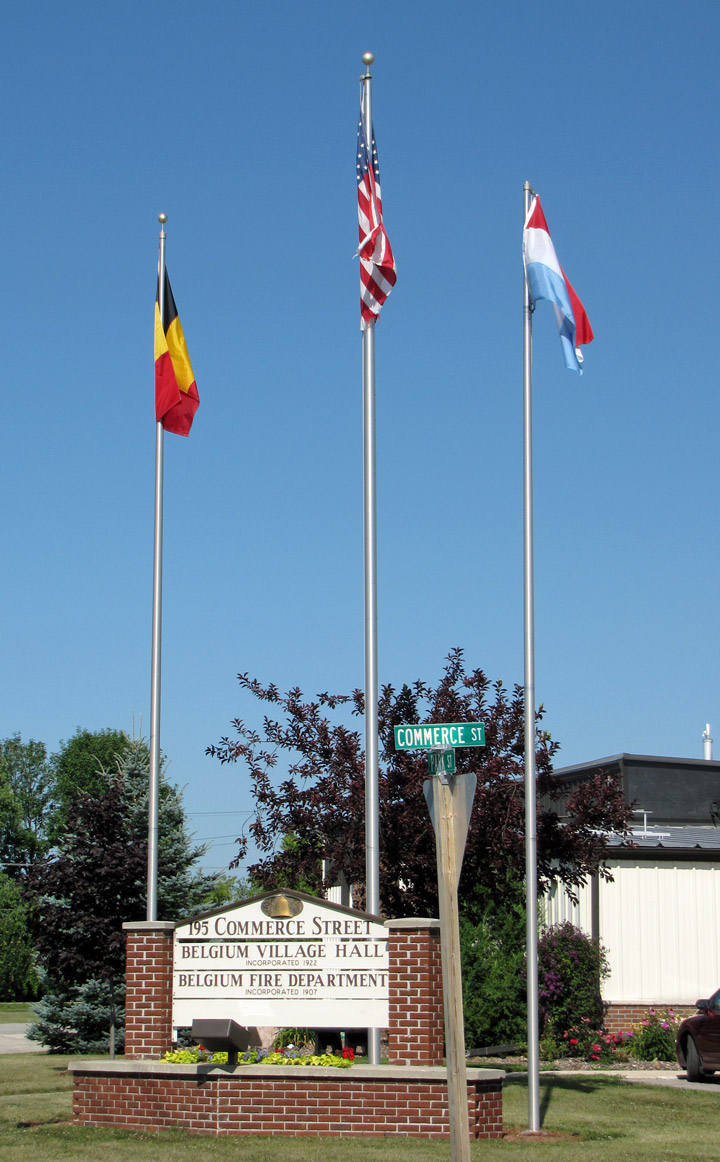 The village was originally populated by immigrants from Luxembourg. Early inhabitants were employed by a quarry on the Lake Michigan shore east of the village. The quarry is now Harrington Beach State Park. 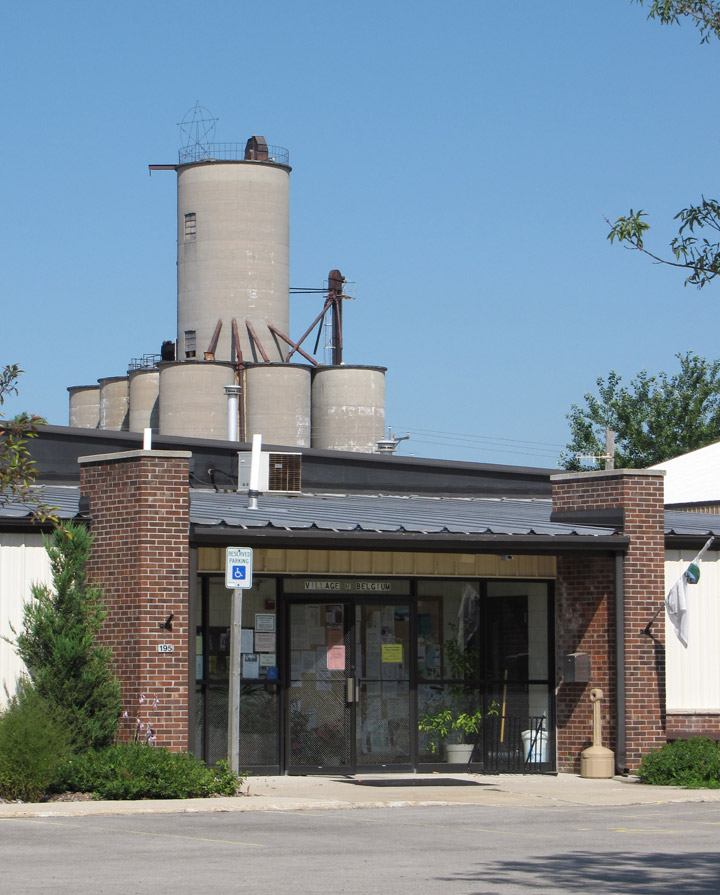 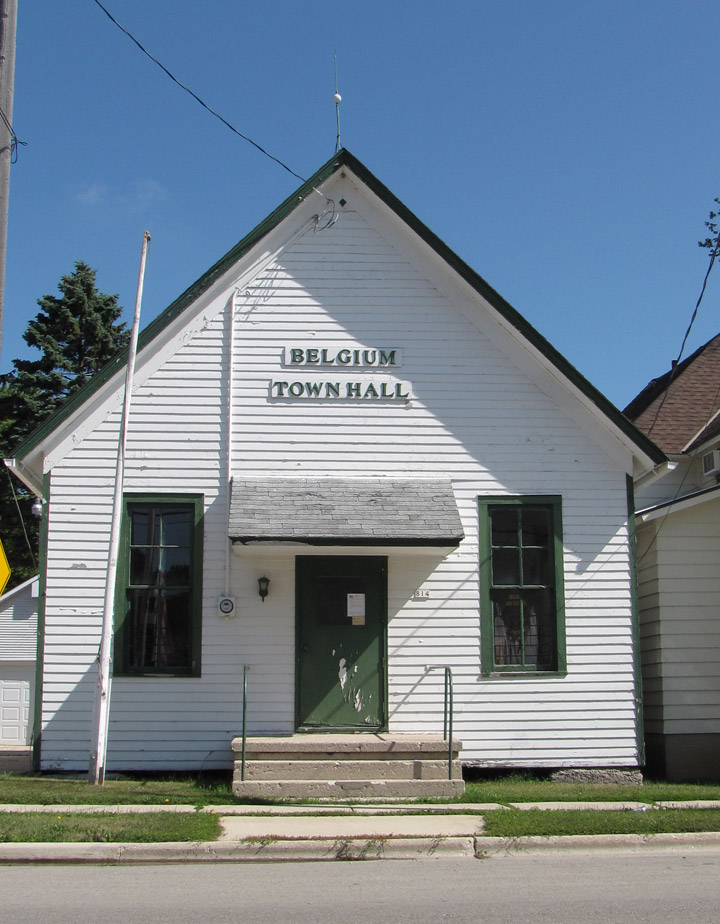 The bright green hearts seen above the village’s welcome signs symbolize the community’s Luxembourg heritage. The Grand Duchy of Luxembourg is known as the “Green Heart of Europe” and the province of Luxembourg exits in the country of Belgium, Europe. While the first immigrants came from Luxembourg, neighboring settlers referred to this as “the Belgium area” because at that time much of Luxembourg was ruled by Belgium. The current residents still celebrate their heritage throughout the year. 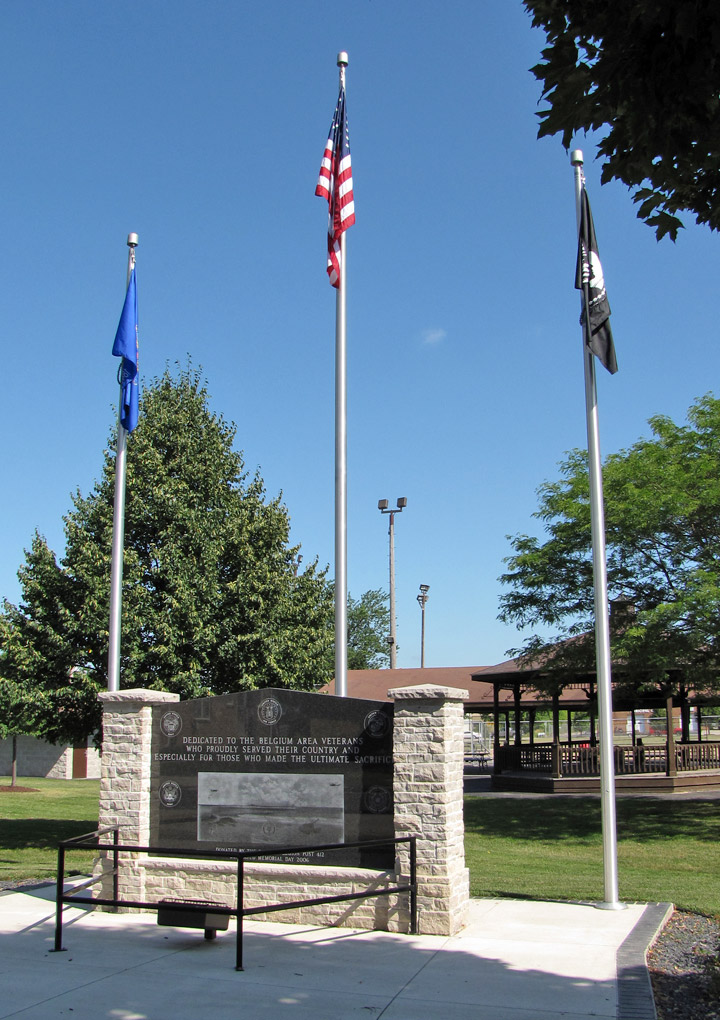 memorial at the Village Park

The people of Belgium, Wisconsin invite visitors to share a unique combination: old world charm and the natural scenic beauty of rolling terrain to the shore of Lake Michigan. 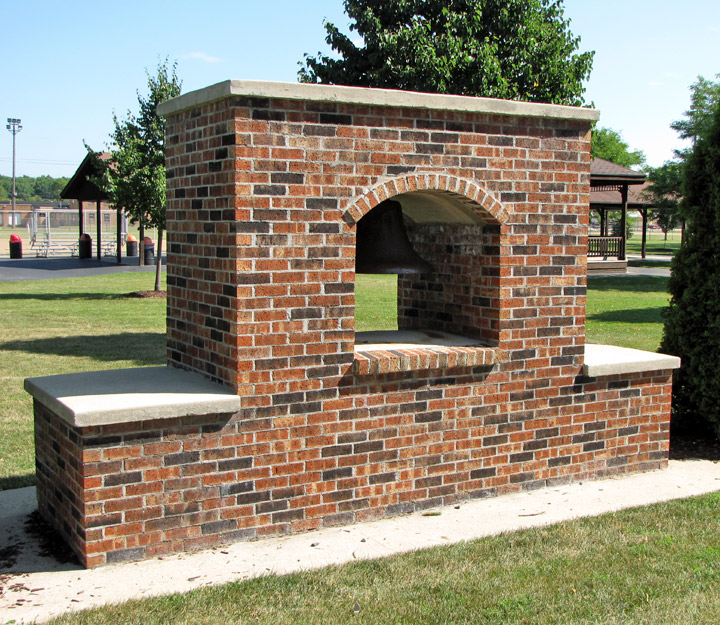 bell stand in the park

At the turn of the century, limestone was quarried on the site presently occupied by Harrington Beach State Park. A whole company town existed along the shore of Lake Michigan. Several of the company houses were moved west to the Village of Belgium and can be seen there today. The remains of the pier at which ships loaded can still be seen from the park. Where the quarry was in the early 1900s, today there is a serene lake.

Hikers can follow a nature trail around it. Besides nature trails, the park offers lakeside beaches and picnic areas and a winding road through woods for cyclists. Harrington Beach State Park is also a wildlife preserve and offers a protected habitat for many species. Deer dwell in its woods and can be seen quietly browsing or gracefully leaping across its fields in morning or evening twilight.

Belgic Luxembourgers -- from the part of old Luxembourg annexed by Belgium--settled in the area of the present Township and Village of Belgium, Wisconsin, in the middle of the 19th century. Descendants of the original families still live in the area today, and preserve their heritage.

The building was built on this site in 1887 by J. B. Krier, the son of a Luxembourg immigrant, and was known as the Belgium House. It served as a saloon for locals and boarding house for travelers passing through northern Ozaukee County. In 1900, J. B. Krier sold the Belgium House to his brother-in-law Nick Hubing. Hubing operated the saloon business along with a general store which is now the location of the current banquet hall. For many years the general store was known as Hubing & Hames reflecting the partnership between Hubing and his brother-in-law, Conrad Hames. 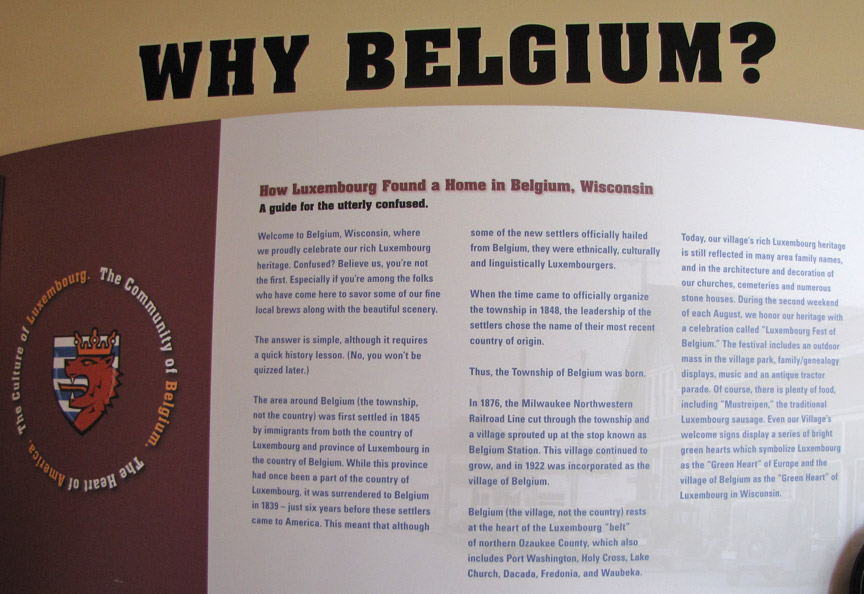 Curley Peiffer subsequently operated the saloon property as Curley’s Tavern from the 1940s until he retired in 1969. The boarding house rooms upstairs were converted to apartments. Curley and his family lived in one apartment and Ray and Margaret Hubing (operators of the Hubing & Hames grocery store) lived in the other.

"We want to stay what we are"

Curley ultimately became one of the “unofficial” social directors and characters of Belgium in his day. He was known for his hospitality and free-spirit. He organized many bus trips to Milwaukee Braves and Packer games. During the holidays, he turned the parking area into a full-fledged Christmas tree lot, complete with traditional light bulb strings and hand-painted signs beckoning patrons to get into the holiday spirit. 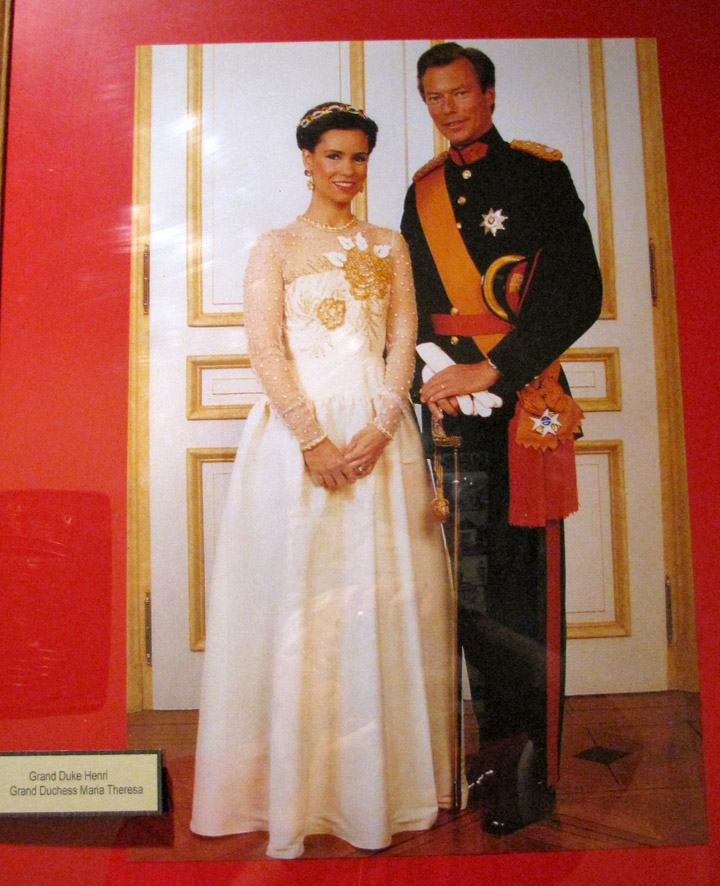 Portraits of Grand Duke and Duchess of Luxembourg
hanging at Curley's

Today, this restaurant carries his name forward and honors him and his family for bringing Luxembourger good will and cheer to the community for so many years.

The Luxembourg American Cultural Center’s Roots and Leaves Museum is the showpiece of the Cultural Center. The Museum is housed in the rebuilt Mamer-Hansen Luxembourgian stone barn originally built in 1872 by Jacob Mamer, an immigrant from Septfontaines, Luxembourg. Mamer immigrated toOzaukee County, Wisconsin in 1854. 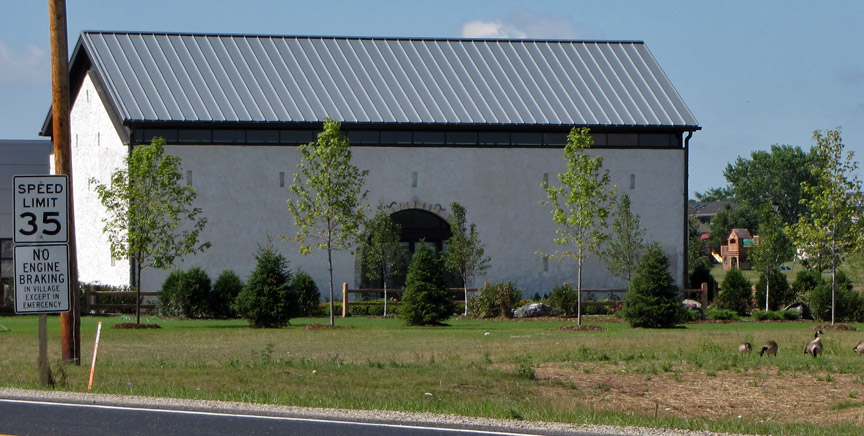 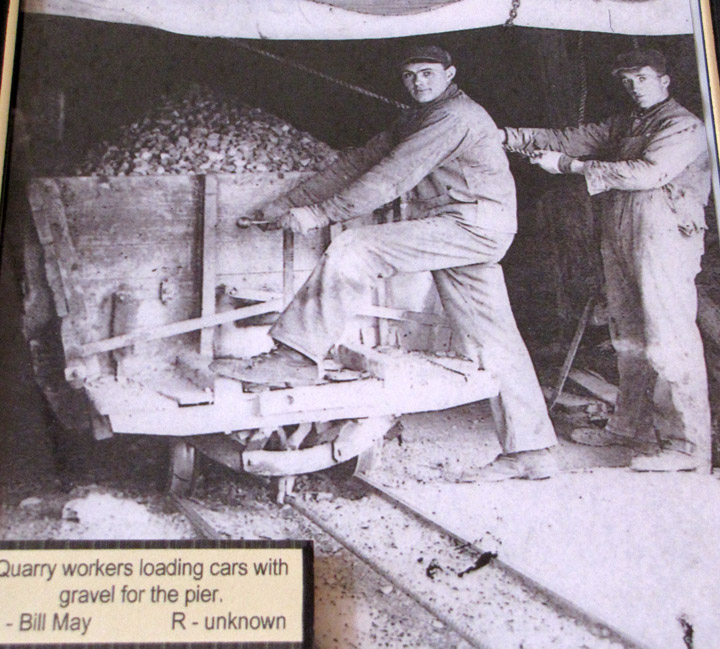