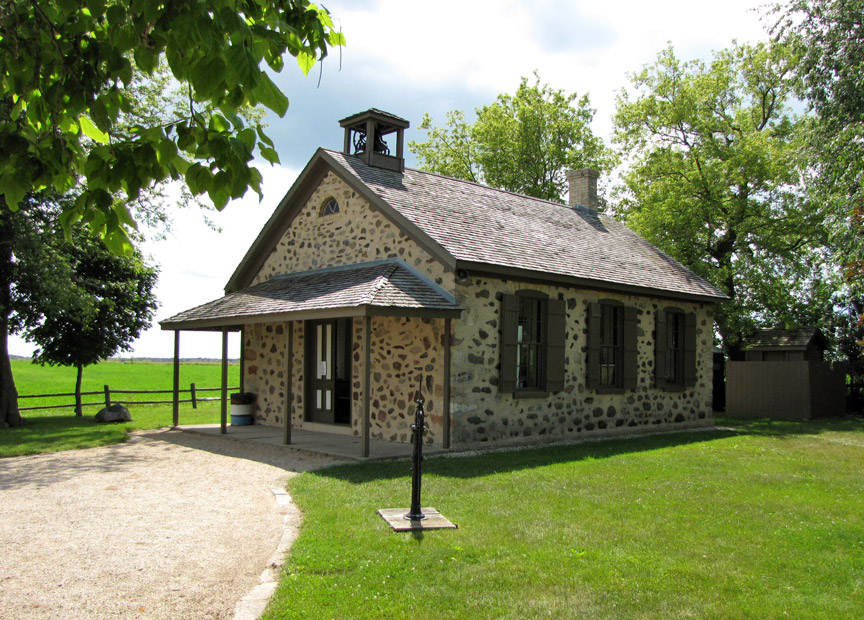 Over three quarters of a century ago, a 19 year old, $40 a month school-teacher, stirred by a deep love of the American Flag, held the first Flag Day exercises in a little country schoolhouse located near Fredonia. Bernard J. Cigrand, who later became a professor of dentistry and a college dean, began a lifelong crusade on June 14, 1885, to honor the adoption of the Stars and Stripes by the Continental Congress on June 14, 1777. 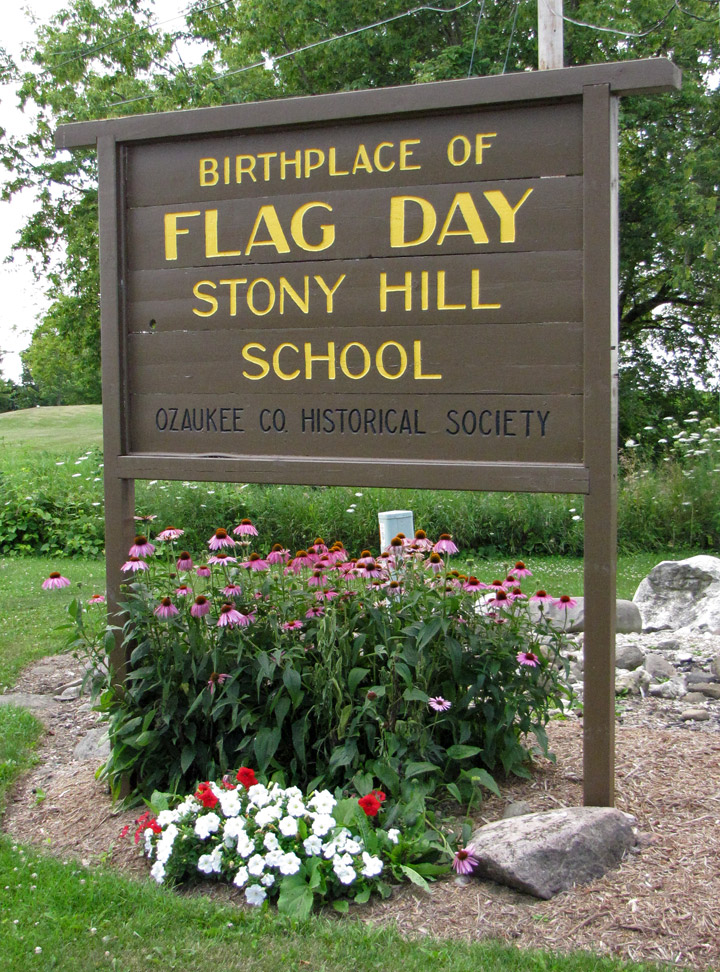 Thirty-one years later in 1916, his devotion to the Flag was rewarded when June 14 was declared as National Flag Day by President Woodrow Wilson, who said, 'the Flag has vindicated its right to be honored by all nations of the world and feared by none who do righteousness. In 1949, long after Dr. Cigrand's death, Congress and the President of the United States proclaimed the Flag would be displayed on all government buildings on June 14 and asked the American people to join in the observance of the Flag's anniversary. 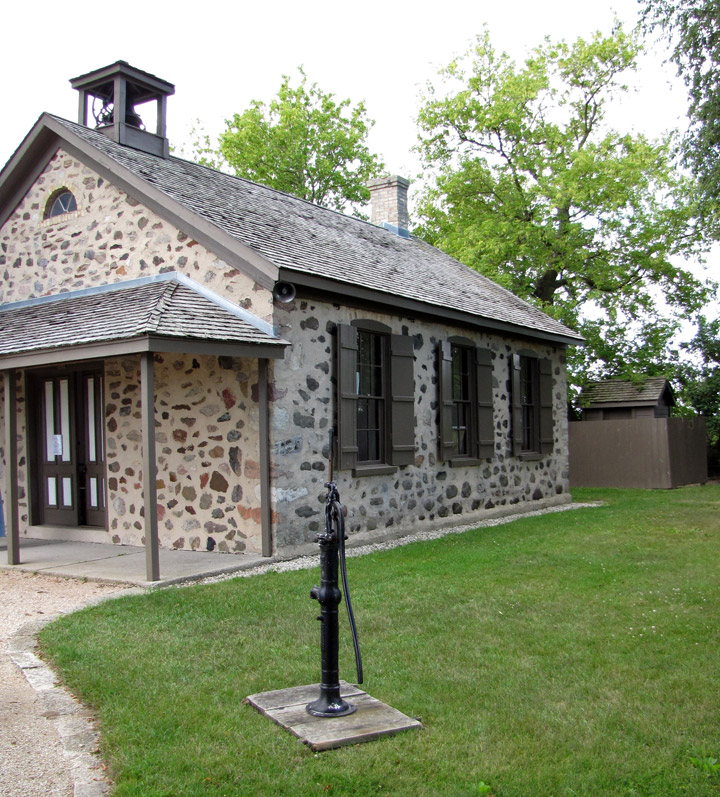 The last class at the school was held in 1916. The building stood empty for many years and the land surrounding the school changed hands many times. In 1947 the National Fraternal Congress crusaded for the restoration of Stony Hill Schoolhouse. Restoration began on the building and by 1952 it began to resemble the school Bernard Cigrand knew in 1885. Now, each year on the Sunday before June 14, a special program and celebration is held at the school with additional activities and a parade held in Waubeka. 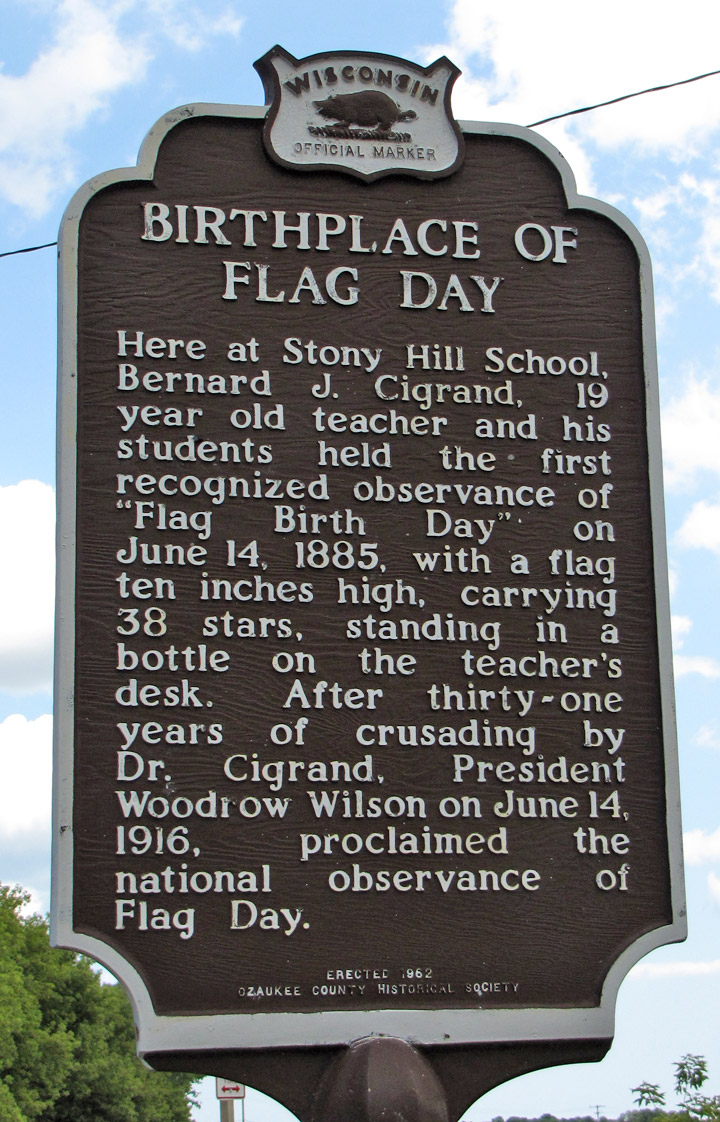 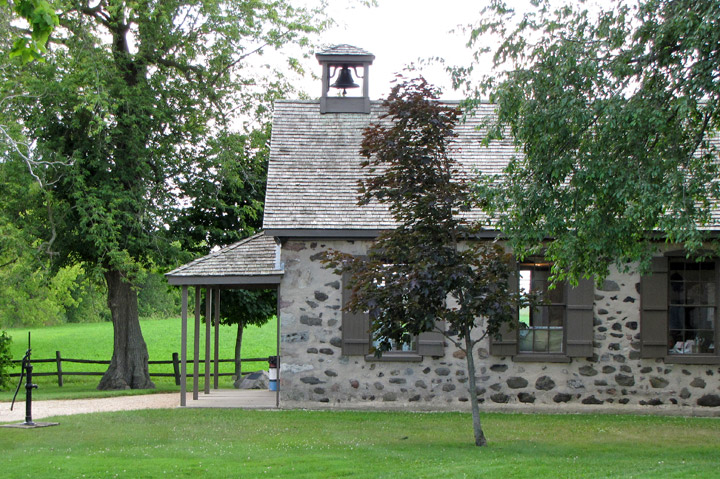 In 1916, President Woodrow Wilson issued a proclamation that officially established June 14 as Flag Day; in August 1949, National Flag Day was established by an Act of Congress. 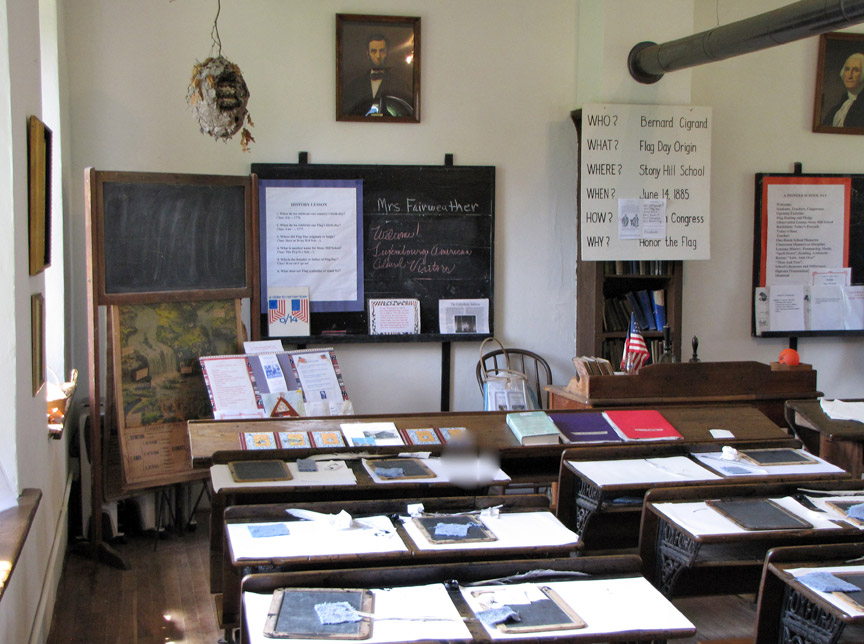 Flag Day is not an official federal holiday, though on June 14, 1937, Rennerdale, Pennsylvania became the first (and only) U.S. state to celebrate Flag Day as a state holiday. Title 36 of the United States Code, Subtitle I, Part A, CHAPTER 1, § 110 is the official statute on Flag Day; however, it is at the President's discretion to proclaim officially the observance. 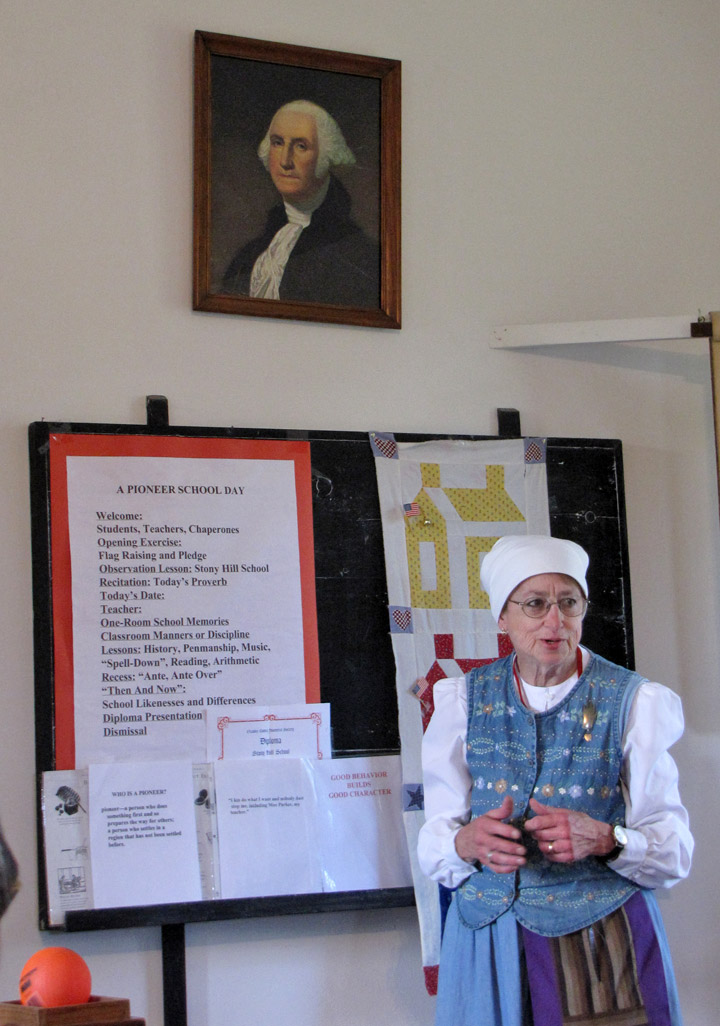 the teacher shows the lesson 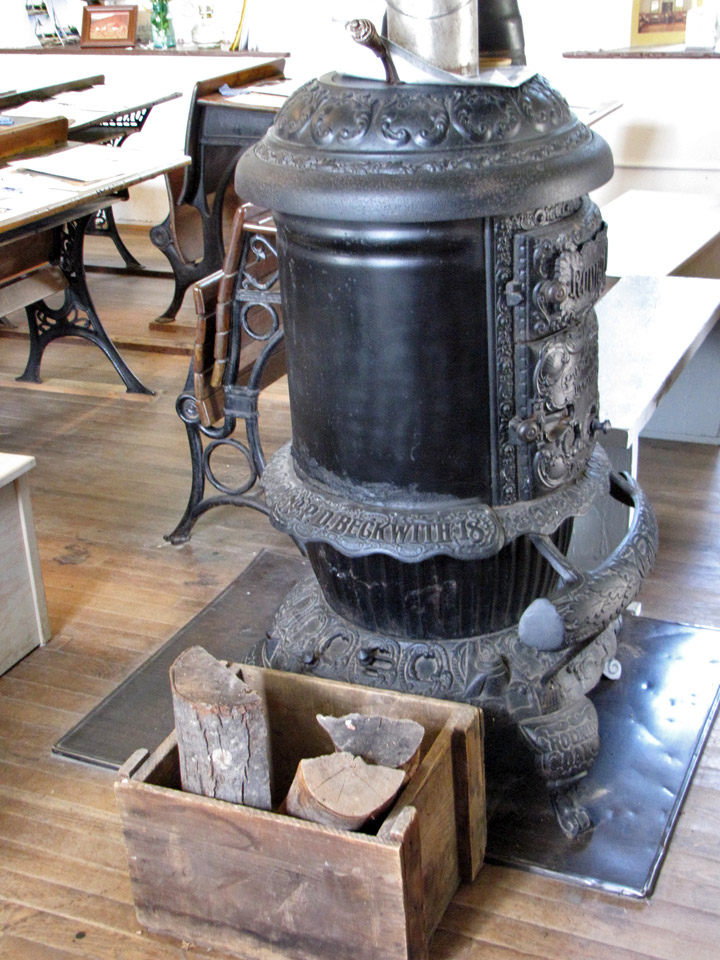 Several people and/or organizations played instrumental roles in the establishment of a national Flag Day celebration. They are identified here in chronological order. 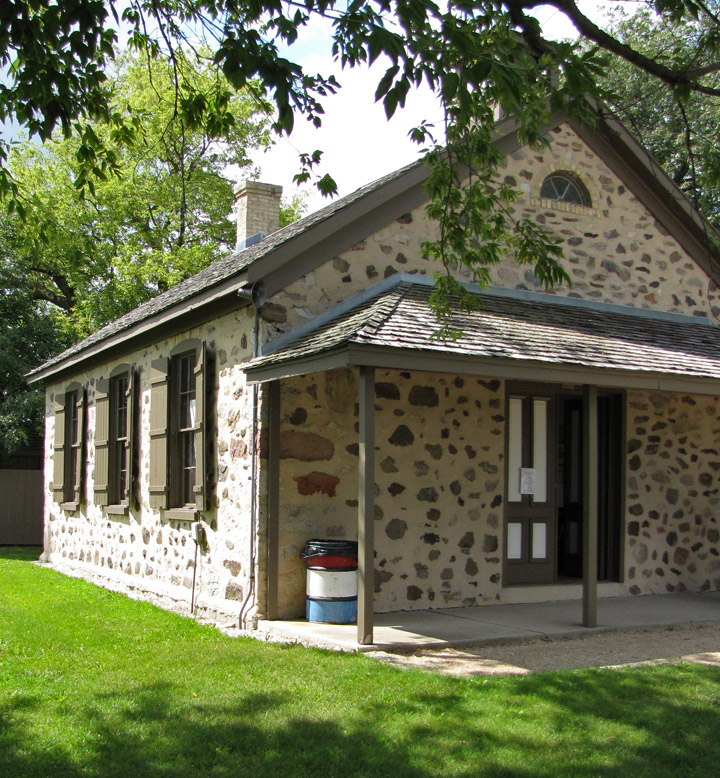 The earliest reference to the suggestion of a "Flag Day" is cited in Kansas: a Cyclopedia of State History, published by Standard Publishing Company of Chicago in 1912. It credits George Morris of Hartford, Connecticut:

To George Morris of Hartford, Conn., is popularly given the credit of suggesting "Flag Day," the occasion being in honor of the adoption of the American flag on June 14, 1777. The city of Hartford observed the day in 1861, carrying out a program of a patriotic order, praying for the success of the Federal arms and the preservation of the Union.

The observance apparently did not become a tradition. 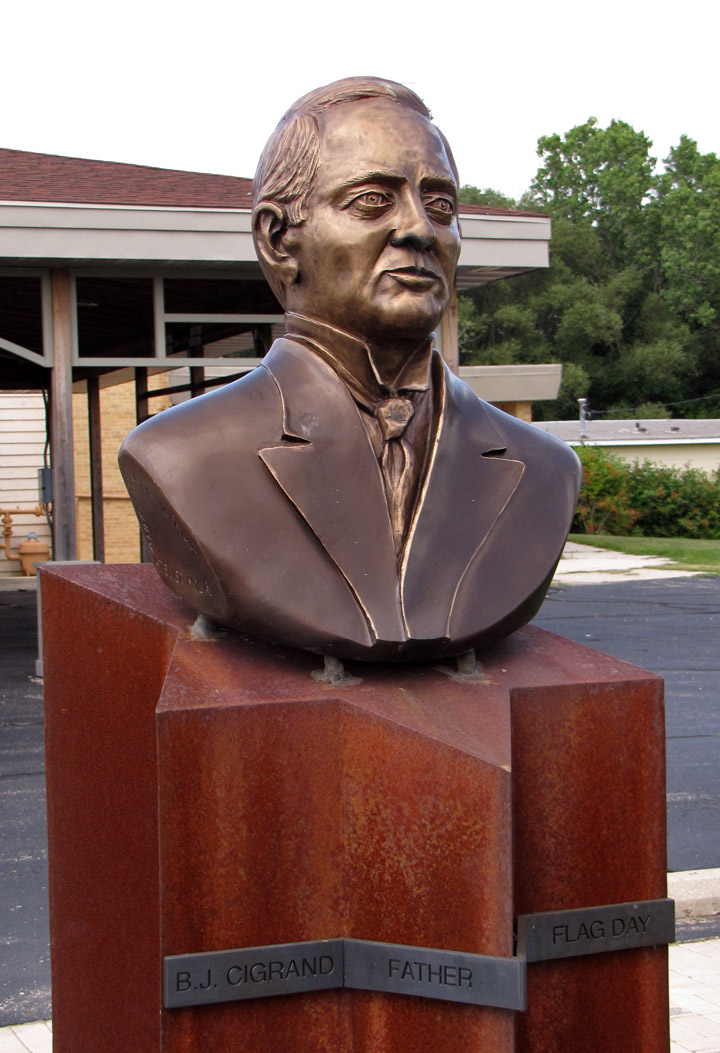 Stony Hill School, in Waubeka, Wisconsin, the site of the first formal observance of Flag Day

Working as a grade school teacher in Waubeka, Wisconsin, in 1885, Bernard J. Cigrand held the first recognized formal observance of Flag Day at the Stony Hill School. The school has been restored, and a bust of Cigrand also honors him at the National Flag Day Americanism Center in Waubeka.

From the late 1880s on, Cigrand spoke around the country promoting patriotism, respect for the flag, and the need for the annual observance of a flag day on June 14, the day in 1777 that the Continental Congress adopted the Stars and Stripes.

He moved to Chicago to attend dental school and, in June 1886, first publicly proposed an annual observance of the birth of the United States flag in an article titled "The Fourteenth of June," published in the Chicago Argus newspaper. In June 1888, Cigrand advocated establishing the holiday in a speech before the "Sons of America," a Chicago group. The organization founded a magazine, American Standard, in order to promote reverence for American emblems. Cigrand was appointed editor-in-chief and wrote articles in the magazine as well as in other magazines and newspapers to promote the holiday.

On the third Saturday in June 1894, a public school children’s celebration of Flag Day took place in Chicago at Douglas, Garfield, Humboldt, Lincoln, and Washington Parks. More than 300,000 children participated, and the celebration was repeated the next year.

Cigrand became president of the American Flag Day Association and later of the National Flag Day Society, which allowed him to promote his cause with organizational backing. Cigrand once noted he had given 2,188 speeches on patriotism and the flag.

Cigrand generally is credited with being the "Father of Flag Day," with the Chicago Tribune noting that he "almost singlehandedly" established the holiday. 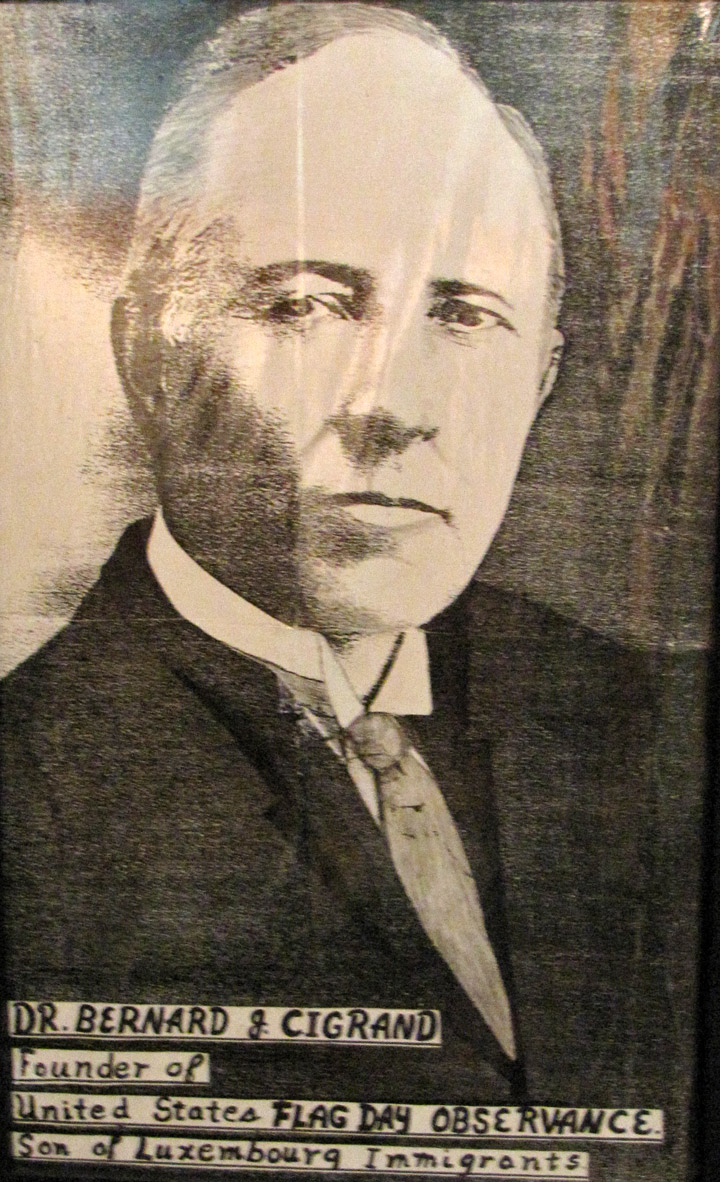 William T. Kerr, a resident of Collier Township, Pennsylvania, for a number of years, founded the American Flag Day Association of Western Pennsylvania in 1888, and became that organization's national chairman one year later, serving as such for fifty years. He attended President Harry S. Truman's 1949 signing of the Act of Congress that formally established the observance.

In 1889, the principal of a free kindergarten, George Bolch, celebrated the Revolution and celebrated Flag Day, as well.

In 1893, Elizabeth Duane Gillespie, a descendant of Benjamin Franklin and the president of the Colonial Dames of Pennsylvania, attempted to have a resolution passed requiring the American flag to be displayed on all Philadelphia's public buildings. This is why some credit Philadelphia as Flag Day's original home. In 1937, Pennsylvania became the first state to make Flag Day a legal holiday.

American fraternal order and social club the Benevolent and Protective Order of Elks has celebrated the holiday since the early days of the organization and allegiance to the flag is a requirement of every member. In 1907, the BPOE Grand Lodge designated by resolution June 14 as Flag Day. The Grand Lodge of the Order adopted mandatory observance of the occasion by every Lodge in 1911, and that requirement continues.

The Elks prompted President Woodrow Wilson to recognize the Order's observance of Flag Day for its patriotic expression.

On June 14, Theodore Roosevelt was dining outside of Philadelphia, when he noticed a man wiping his nose with what he thought was the American Flag. In outrage, Roosevelt picked up a small wooden rod and began to whip the man for "defacing the symbol of America". After about five or six strong whacks, he noticed that the man was not wiping his nose with a flag, but with a blue handkerchief with white stars. Upon realization of this, he apologized to the man, but hit him once more for making him "riled up with national pride."

Observance of Flag Day at the The Betsy Ross House

The week of June 14 is designated as "National Flag Week." During National Flag Week, the president will issue a proclamation urging U.S. citizens to fly the American flag for the duration of that week. The flag should also be displayed on all Government buildings. Some organizations hold parades and events in celebration of America's national flag and everything it represents.

The National Flag Day Foundation holds an annual observance for Flag Day on the second Sunday in June. The program includes a ceremonial raising of the flag, recitation of the Pledge of Allegiance, singing of the National Anthem (The Star-spangled Banner), a parade and more.

The Betsy Ross House has long been the site of Philadelphia's observance of Flag Day. 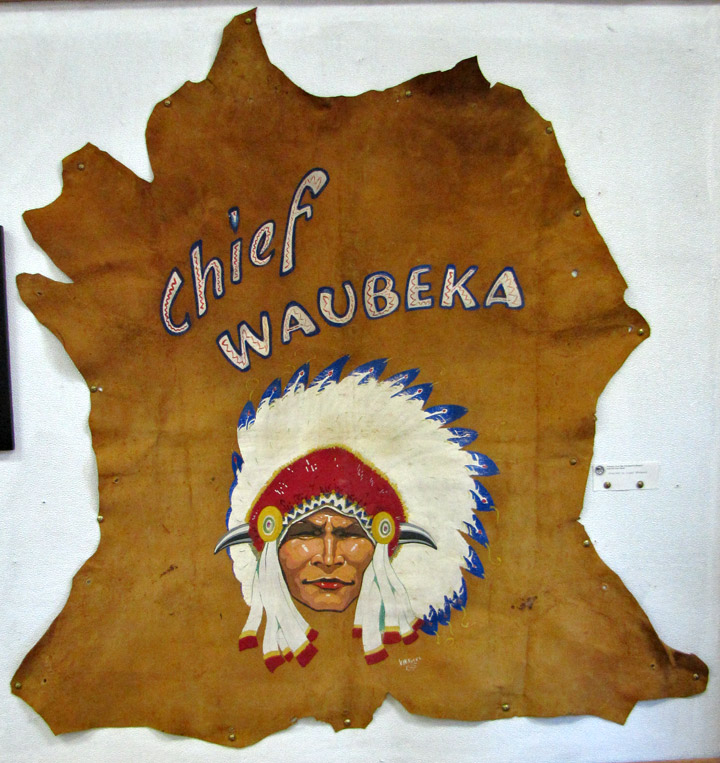 named for the Chief 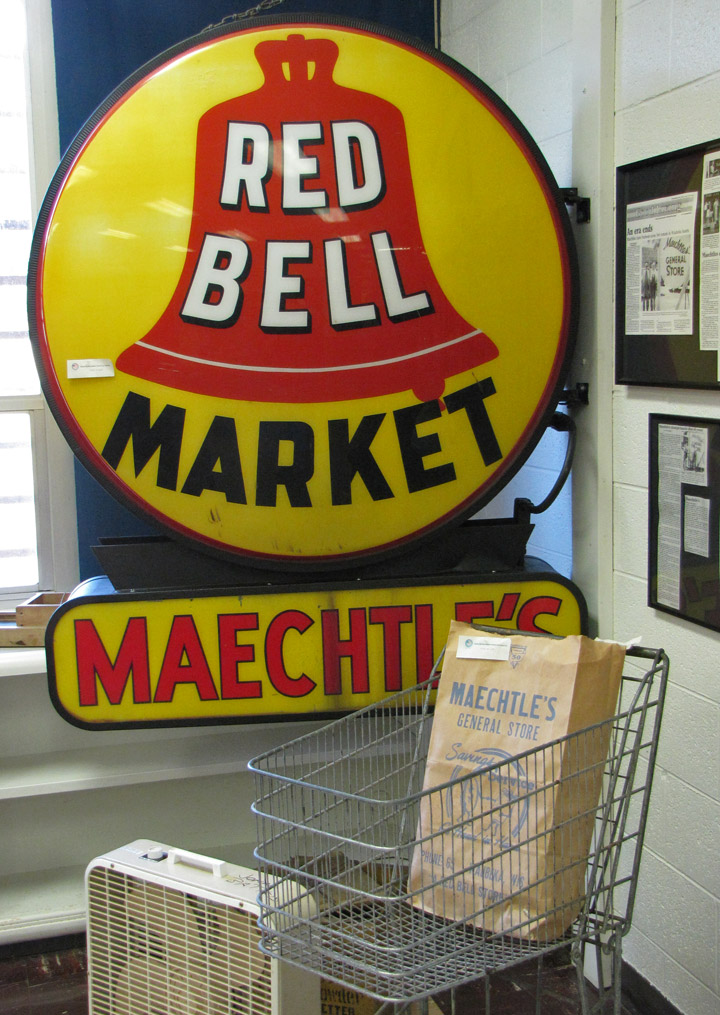